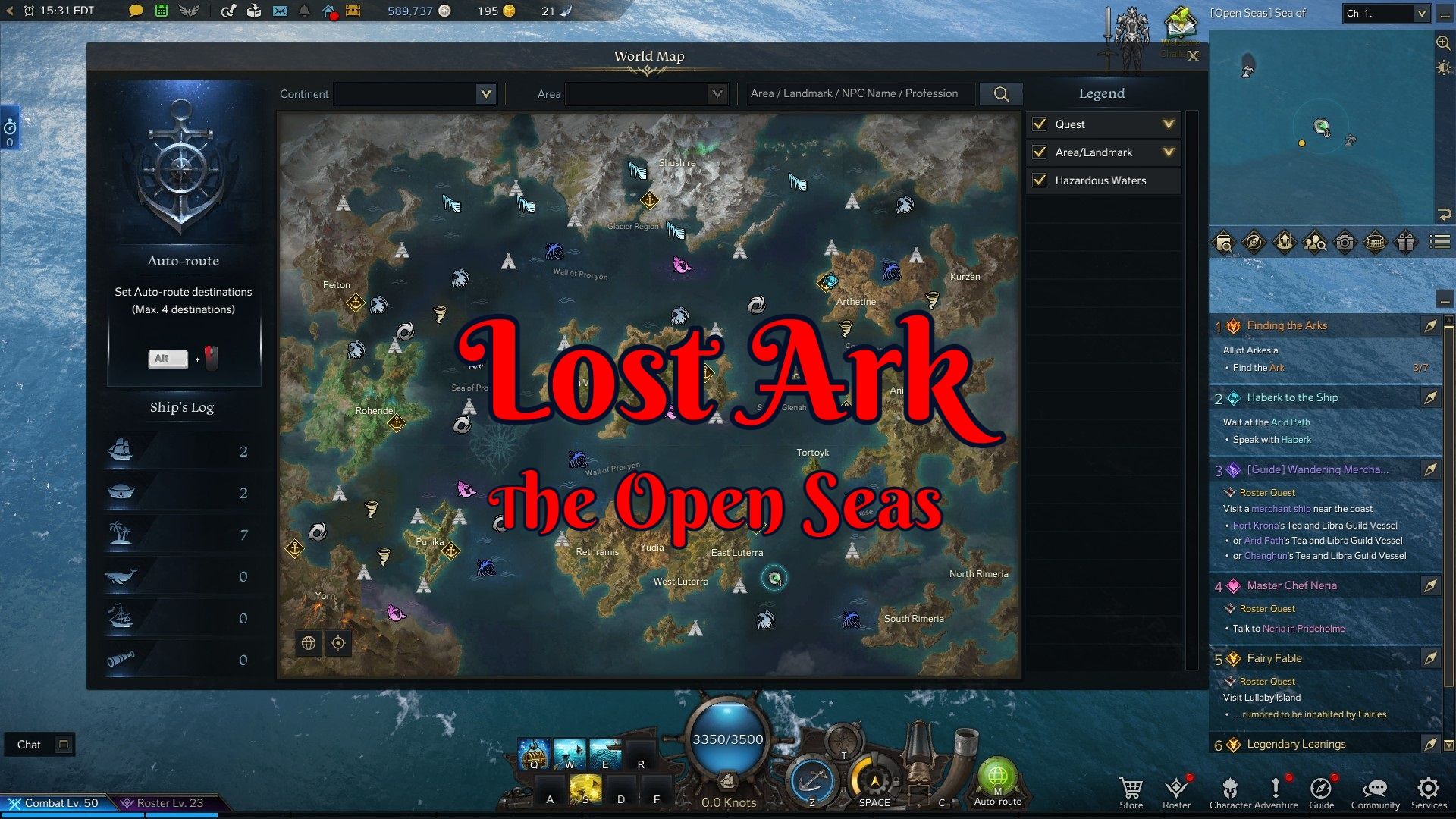 It was time to hit the open seas and see the crazy amount of offerings Lost Ark has. The game having 13 continents is just a starting point. There appear to be around 100 islands with endless things to do and collect on them as well. I was not expecting Lost Ark to have such a huge amount of content on the seas. There are a few different kinds of boats to unlock and you can even upgrade them as well. Despite unlocking a couple of other boats since my journey started I still prefer the starting ship Estoque at least for now.

While I have not run into a lot of dangers yet on the open seas other than a nasty storm that made it impossible to see around me till I got clear of it. The ships and even the crew can add resistance to the different water hazards you will run into such as kelp beds, sandstorms, sirens, cold snap, tempest, and dead waters.

While out exploring the open seas you slowly lose durability on your ship. Ships can only be repaired on docks. As such, I had to be careful not to go island hopping for too long or risk my ship being so damaged I would have to deal with the consequences of that.

While Lost Ark quickly introduces you to finding pirate coins as if the entire open sea is just filled with these tokens. In reality, the only barrels I’ve found floating around have been short sail boosts for increasing my speed. 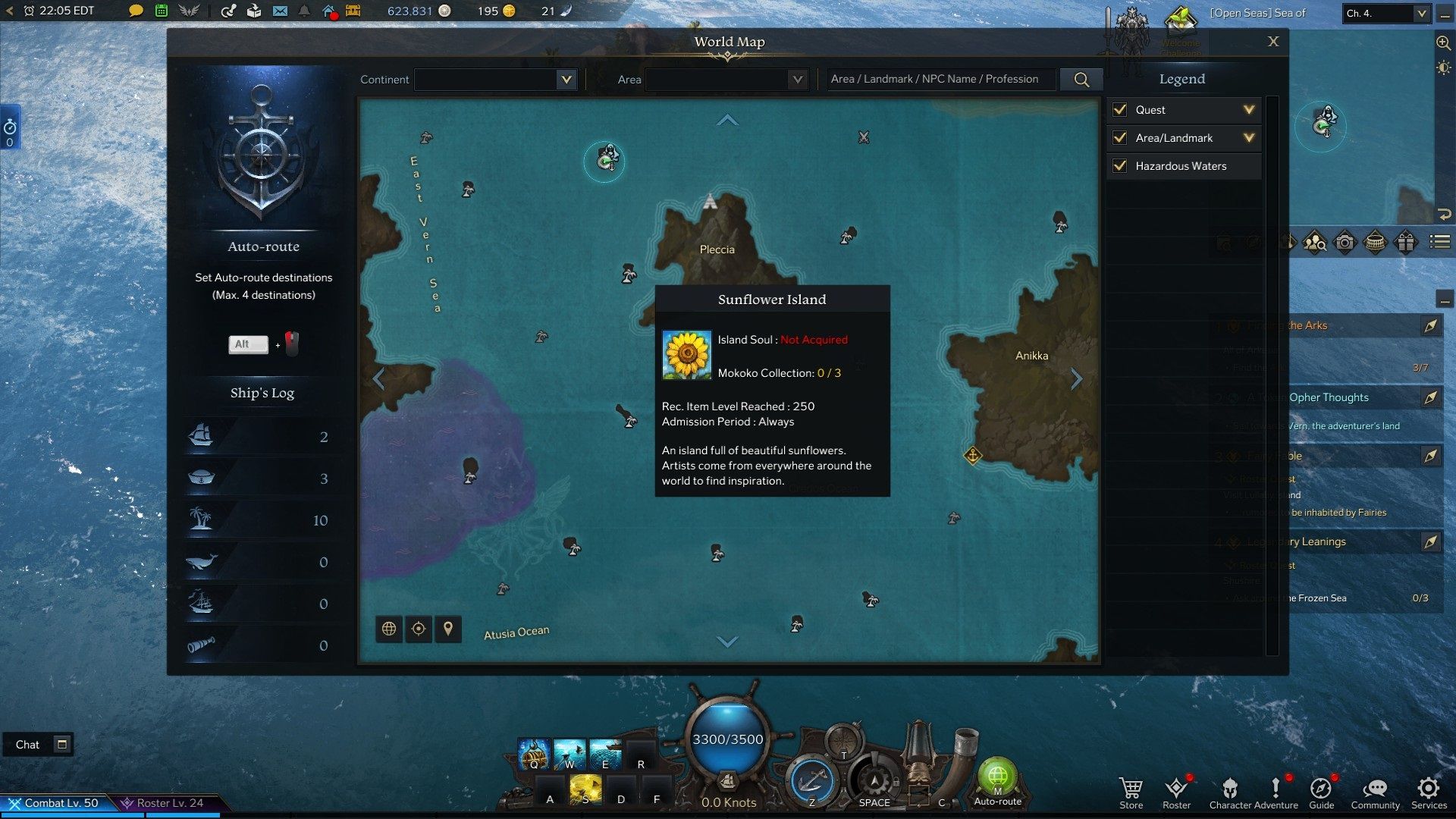 What you do tend to find since there are so many of them are islands. On the map itself, it will display a recommended gear level, anything of interest, and some lore. The lore on these islands tends to be quite strange like there being talking animals among other things.

I was quite shocked after exploring a few of them of the amount of time that must have been put into them. While some of them do contain a collection item called island soul. The majority of them also have Mokoko seeds to collect. Along with other side quests on them.

I have even had islands that gave me a side quest to go find other islands. Since I don’t know much about my surrounding areas I’m not always able to locate the destination if I can even run them at all. I seem to have quite a few island quests stockpiling I’m hoping the game does not have a quest accepted limit otherwise I’ll have to clear a few of them out for the time being. 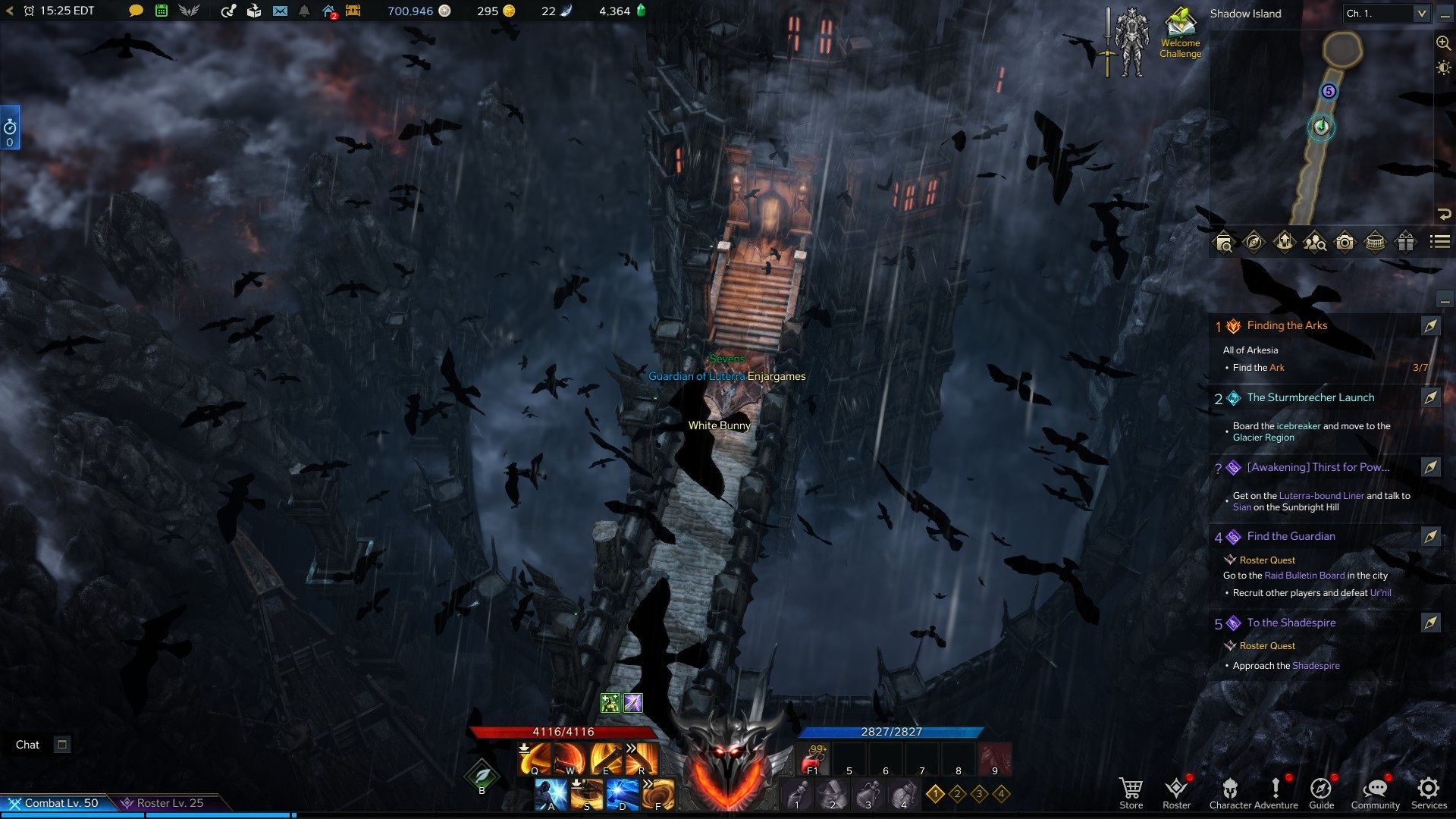 Some of these islands feature unique things like Shadow Island and its tower. Some of which I suspect I’ve wandered into some higher content for other things that I don’t quite fully understand as of yet. While other stuff it was a one-off thing just for that single island. So many little details make a game amazing.

Every time I found another island to explore it was always a little different. They all do seem to have their theme to be based around. So many of them have random treasure chests lying around for you to loot. 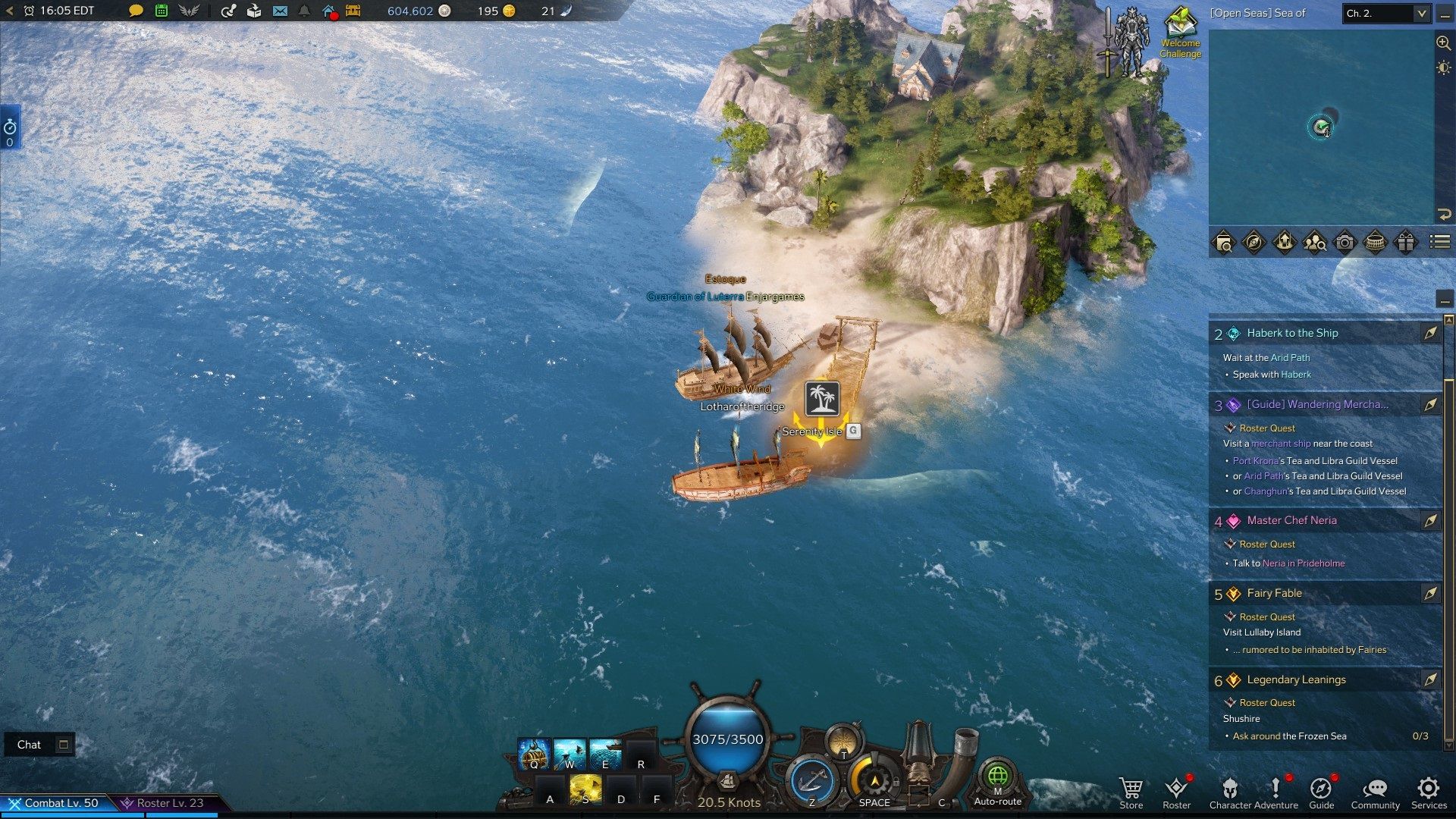 With so many islands I can see how it becomes quite an overload to the player. Other than the game keep track of I collect the island's soul or collected seeds. You are quite on your own for keeping track if you did the questing or needed to return at some point for other reasons.

One issue that I kept running into was not having enough gathering energy. I would get onto an island and it would have a collection quest. While sometimes you would luck out and 500 energy would be enough. Other times I was not having much luck getting the special gathering item to drop in the amount I needed to move forward. A lot of the quests found on these islands reward you with all kinds of things. Usually in the form of different tokens. Many of which I’m willing to admit I still don’t know enough about that I’m holding onto many chests unopened till I better grasp the reward system.

One of the rarer encounters I’ve discovered in my journey was a drifting shipwreck. After exploring it my end reward for doing so was a map. For now, this will just be an item I keep on me. I don’t know the open seas well enough yet to have any idea where this point is trying to allude to. There are even NPC merchant ships that you can run into. Many are selling things like items you need for ship upgrades. This one was selling a secret map which I was lacking the currency to purchase. I can only wonder for now the kind of adventures such a map would lead me to.

I do know I find it quite interesting. Lost Ark seems to play rather well into the sea life. While I’m not exactly a pirate there are even PvP islands out there. I tend to stay away from them as they are often closed or I do not meet the requirements for them. I also know certain and quick death awaits my low geared character. 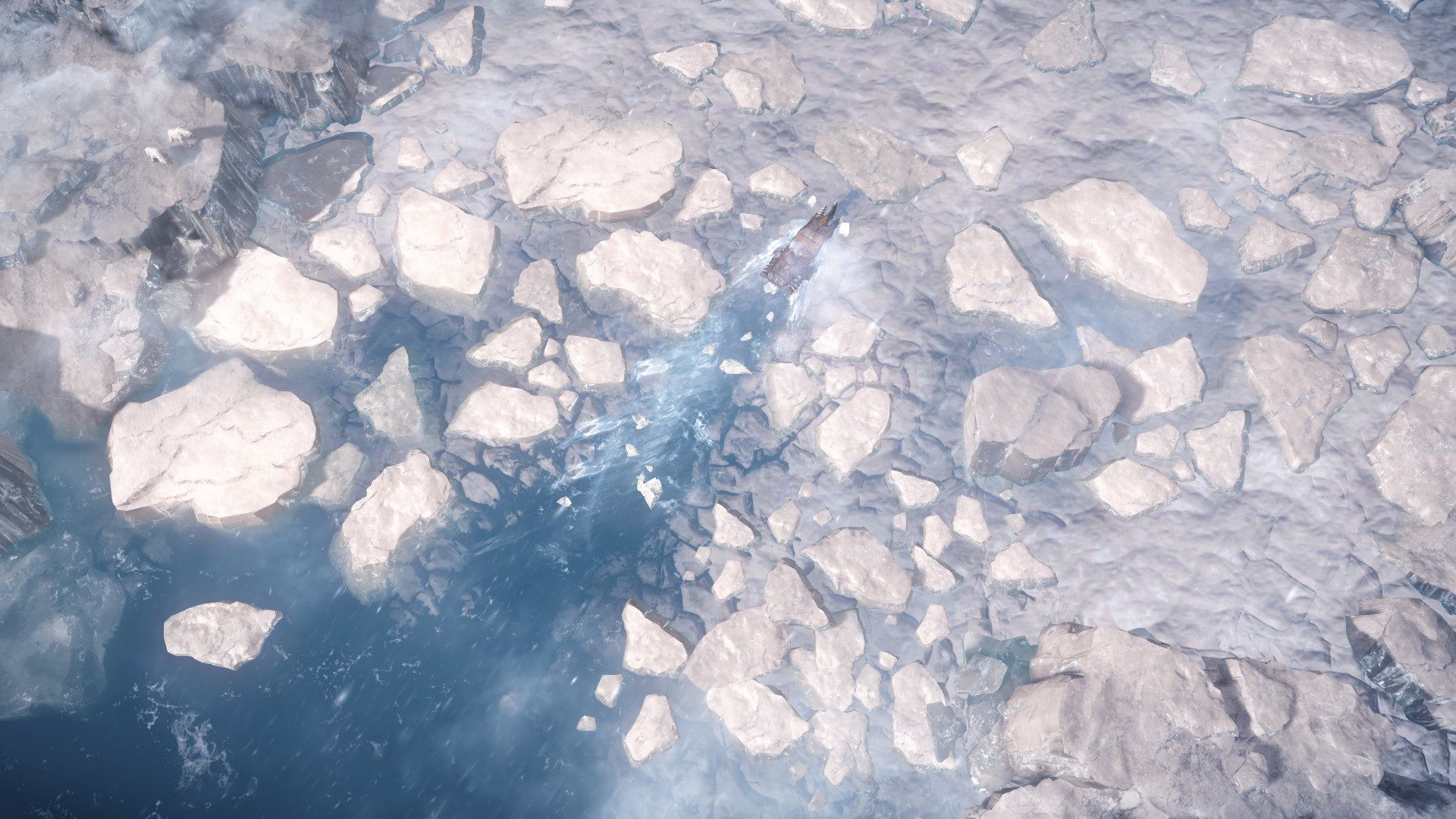 After running a few islands I felt it would be best to get back onto the main storyline and increase my gear level further. While the islands I was running had a recommended 250 level which I was slightly above. I felt it was quite a struggle sometimes. Not to mention the rewards I’ve been getting I still don’t have a great idea of using them as of yet.

Overall, it was quite a fun adventure. Some of these islands are meant to be run as a side thing to do while you go towards a much greater target. There are however islands out there that had much nigher gear requirements or other things that I have yet to acquire. This means I will have to backtrack at some point.

I look forward to running them on occasion. At some point, I’ll hit the high seas of Lost Ark again and run a bunch of these islands all at once. For now, it’s time to work on other things in Lost Ark. So many things to do and still lots to learn.