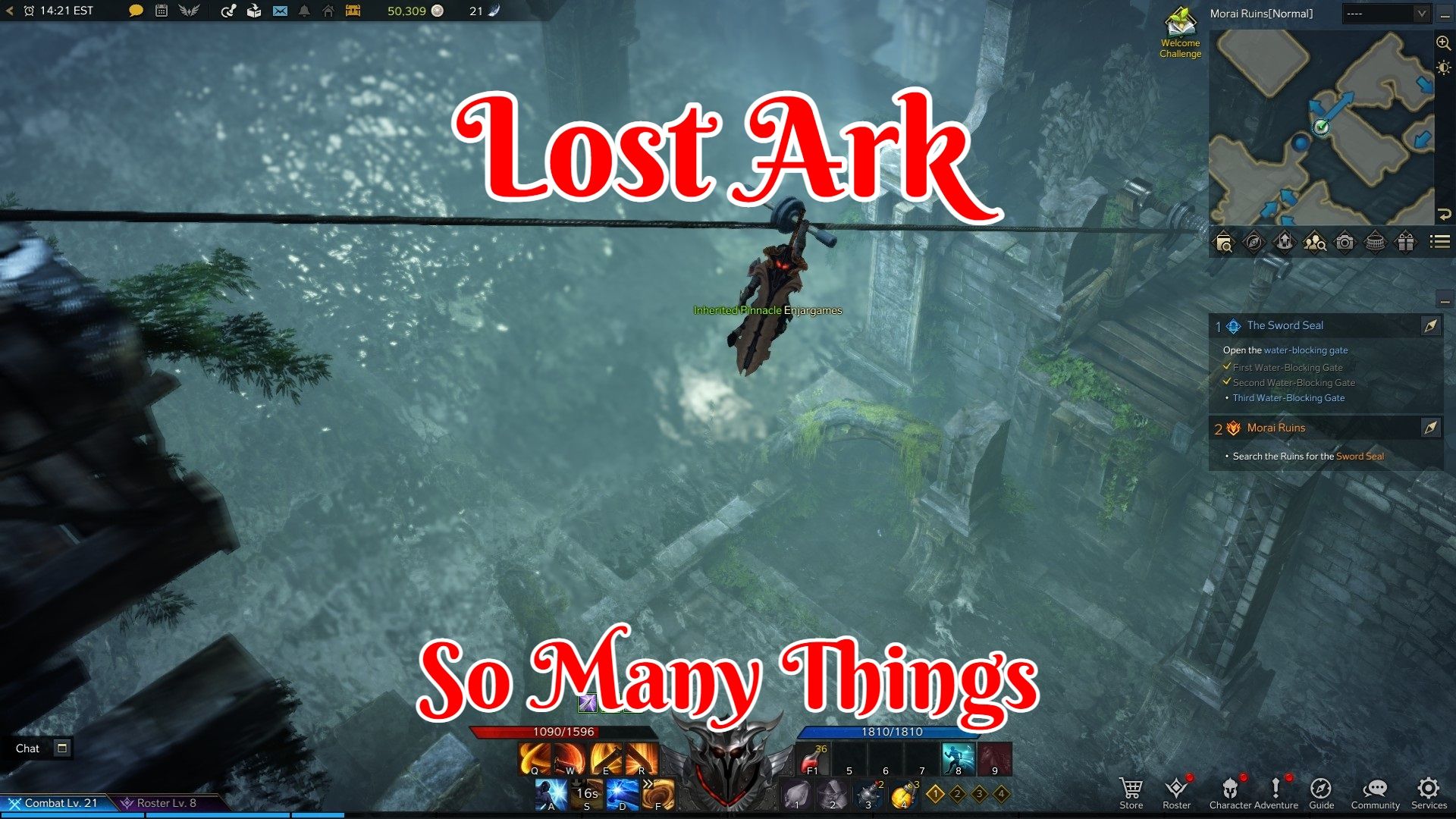 Lost Ark has a lot of things to do. Unlike a lot of other games where you just get an achievement and move on to the next thing getting nothing else. Lost Ark rewards the player with a variety of items from could be useful now to save till more towards the later game.

With a game that is endlessly tossing new things at you to do. I always find it helpful to invest some short-term time into working out what can be done in the short term and what you need to work on almost daily to complete over the long run.

Since I’m still leveling up on my first character I wanted to make sure I had a better understanding of what I can be doing now daily right now. What I should leave for later. Along with if I can find any ways to save some time.

Lost Ark is also one of those games where making alts appears to be quite an important thing to do. With a lot of things shared between your roaster of characters. This means if you don’t 100% something the first time around there is a good chance an alt can finish it off for you. 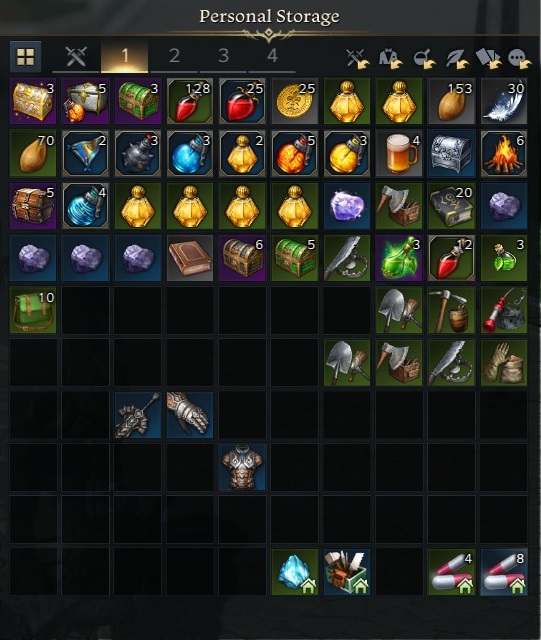 While doing this there has also been some inference I’ve made from what I know playing other games. Lost Ark seems to be tossing a lot of things at you that using right away seems wasteful. After playing around with a couple of things I’ve started hoarding certain items in my storage till I get a better grasp of what the rewards are and how I’m going to go about using them.

Some things I’ve even reframed from claiming. I however want to at least take my first character quite far even if I end up playing something else as my main months down the road. As such I suspect a lot of these earlier items I would need to be using up anyway so claiming the character bound once per roster rewards. I’m not that worried about it for now. Deeper into the game I’ll reconsider if I should be holding off on claiming anything at all. A lot of things like doing the basic guide and being rewarding silver are something this character will need anyways. So I don’t see a lot of harm in claiming more generic stuff like that. 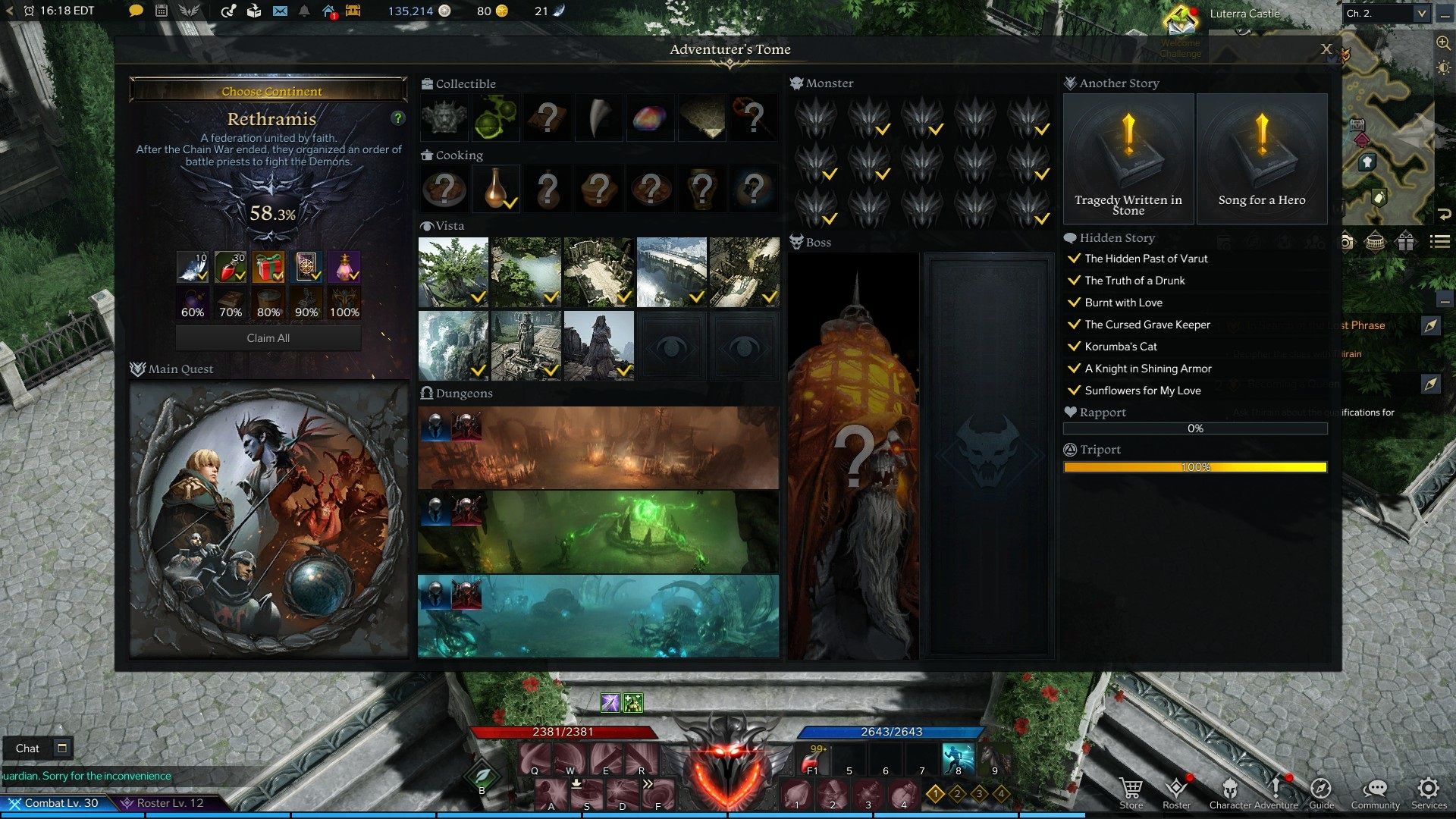 One thing I wanted to make sure I get a better grasp on right away is the lost Adventure’s Tome. Each continent has its own and it’s broken into a few different parts. While some of the rewards from it seem not that great. Each 100% continent rewards an Ignea Token which appears to be quite important.

Just by running through each of these continents, there are going to be some easy things to 100% without even thinking about it. One such thing is completing the storyline. You can’t advance to the next part without doing so anyways.

Another thing is going to be picking up all the Triport (teleporters). Since having them all unlocked and ready to use is a massive time saver there is no point in not picking them all up. They are shown on the map anyways.

Lost ark is also one of those games that reward the player that takes time to explore an area properly and find what it all has hidden. One of them they call hidden story which if you find the little bit of lore gives you a small stat increase and also counts towards 100% the Adventurer’s Tome.

Some of these things were quite easy to overlook. I might find one hidden behind a statue. Another one might require multiple steps to get all of them. Those are however not the hardest to find as at least you have an area you can expect to look over.

Lost Ark even likes to hide things off the map requiring you to find a secrete entrance or no border barrier preventing you from just walking “off” the known map. How sneaky. This also makes you wonder how many times you walked past an area and never noticed whatever content clue is given that something is ajar. 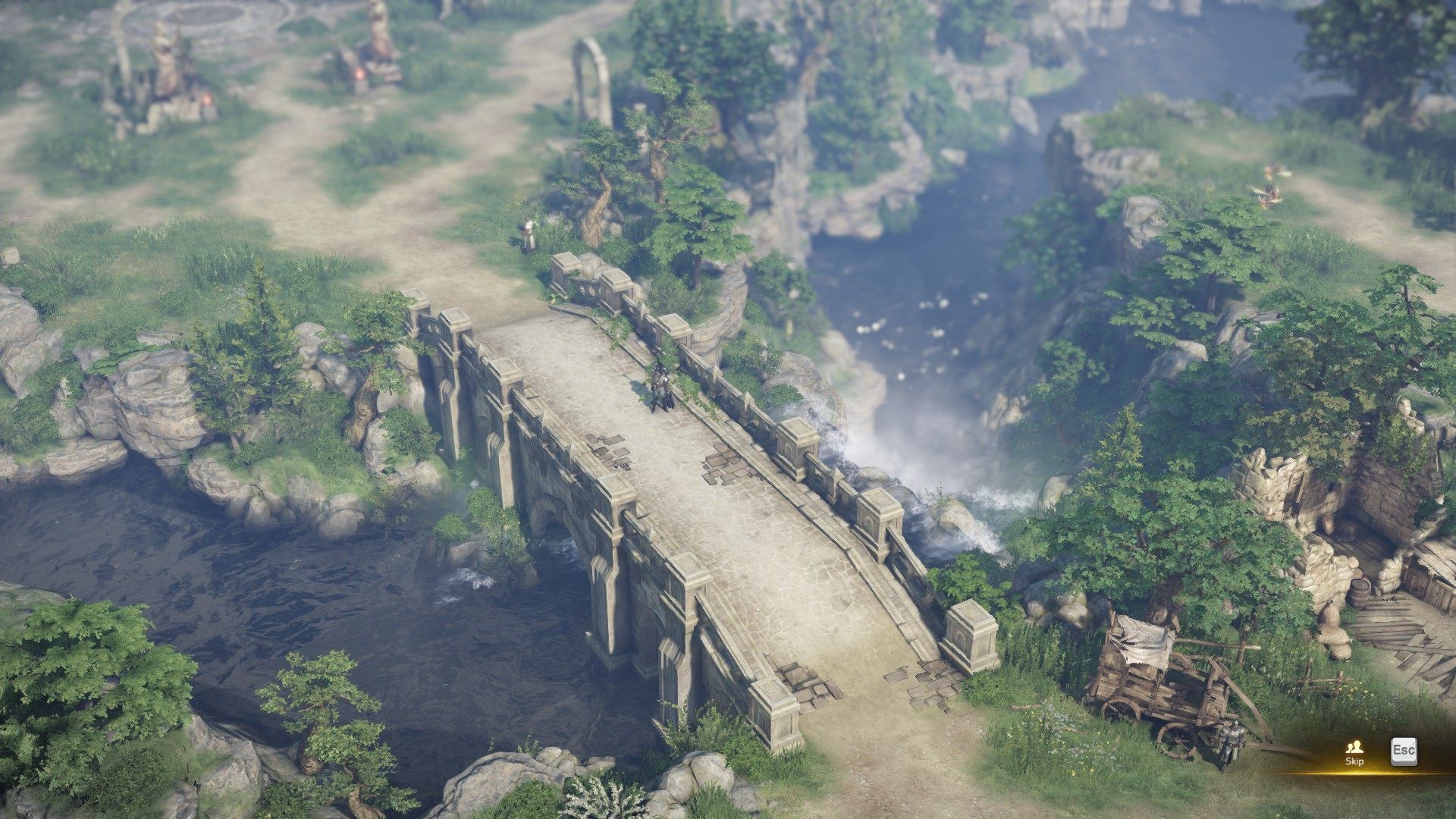 There are also areas of the map where if you find the right location to interact will the game will pan out into a wider view of an area. While that is great for getting credit for the vista areas. I have another motive for wanting to find these. They sometimes show the hidden things you are trying to find or sometimes give content clues. One of the more time-consuming things about Adventure’s Tomes I have found so far appears to be needing to get rapport with important NPCs. You need to level up your trust with them by giving them gifs, playing songs, using emotes, and running limited questing,

I have found gifts are rather hard to come by. Moving forward I’m going to be saving any of the larger rewarding gifts I find to make sure I’m giving them to an NPC that will give me the most out of it.

Many of the other activities such as emotes and playing songs have a limited use per day. Each NPC has their preference in what you can even use with some of them rewarding a lot more rapport. I’m going to have to remember to do it daily and use up any actions I have for these different NPCs with me finding even more of them the further I advance in the game.

Each continent also has collectibles you need to gather for Adventures Tome. At first, I thought you just needed one of each item till I realized they had a counter next to them after finding one of the items. Which made to think this might be perfect for leaving and randomly getting as I level up alts over time.

I however noticed something. These items did not seem to indicate on them that they could not be traded. I just had one issue I did not have access to the player market at the time to prove or disprove my working theory.

I ended up not trying to 100% an area (which I could not do anyways) and just moving forward leveling up till I gained access to the market. With this game being out for a month now I assume lots of players have so many lower continent items they might be selling for next to nothing.

Sure enough, once I got to level 30 and unlocked the ability to use the player market I appear to be correct. Those Plague Spores alone are selling for 3 gold each with something like 8k of them on the market.

The only issue is the player market appears to be in gold and not silver. I have over 100k silver but only 80 gold. Since I can’t judge quite yet how cheap 3 gold is or is not. I’ll have to leave using alts to pick up random amounts till I get a better understanding of how hard gold is to come by. This could be quite the time saver if I can just buy what I’m missing.

Outside of each continent having its collectibles and other things like cooking items for the Adventures Tome. There are much grander collection quests going on. One of them is called the Mokoko Seeds and there are 1210 of them in-game to find. That is just mind-blowing. Thankfully the game is not entirely evil when it comes to gathering 1210 items. There is a map broken down into different areas. It even shows you how many are in a dungeon. I had no idea there were 88 seeds in Rethramis and I’ve missed most of them. At least now I know to look harder and how many to find in an area. 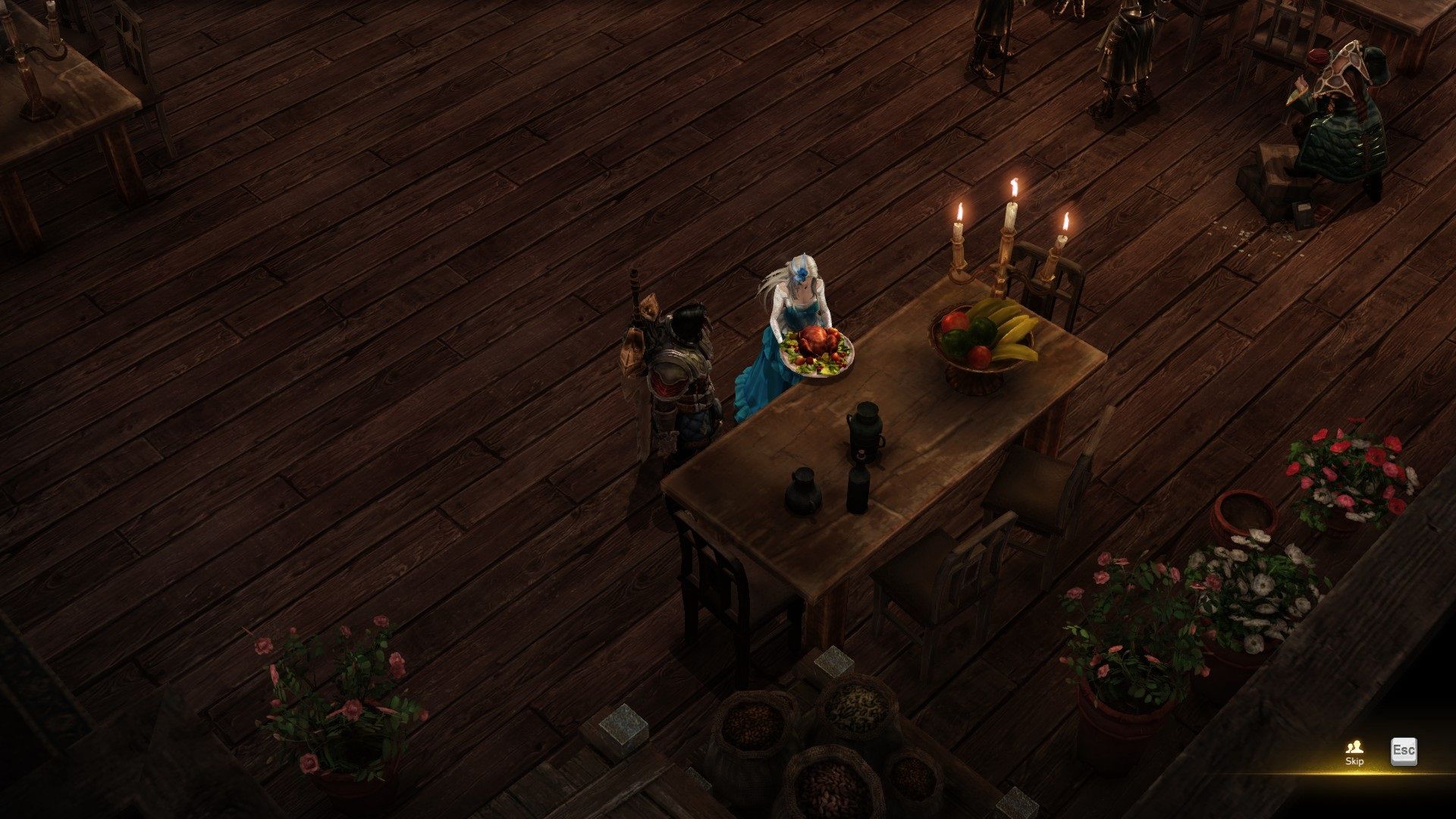 At least now I’m not feeling so overwhelmed by the game with just how much there is to do. I have developed a basic plan for what I want to try and focus on as I progress forward. I’m also starting to understand some of the things I need to ensure I’m doing every day I log into the game. There is a bunch of other stuff like farming, sending ships out, and so forth but that is for another post.

Screenshots were taken and content was written by @Enjar. Screenshots are from Lost Ark