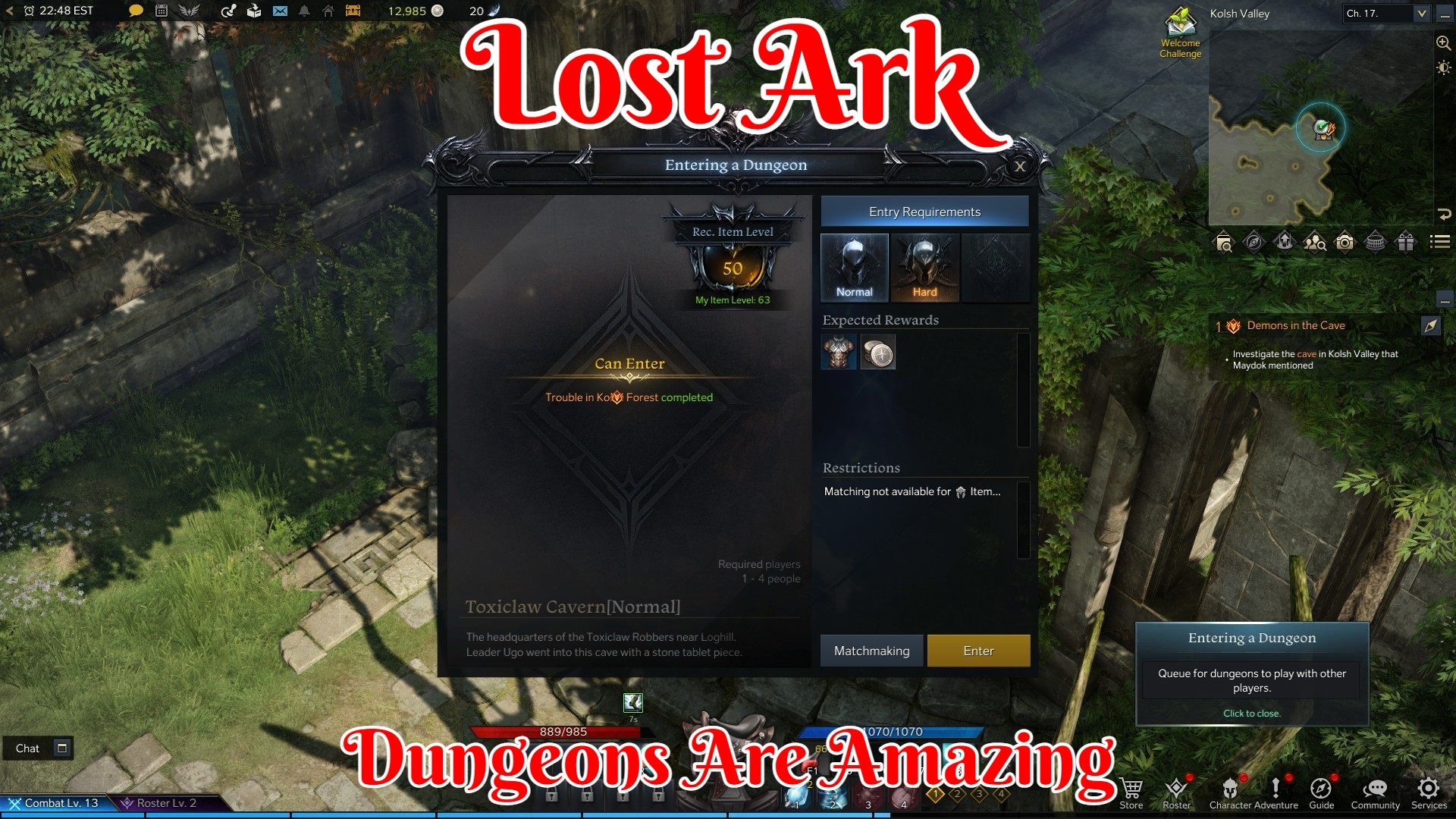 Lost Ark whispers into my ear if I would like to run another one. Yes, yes I would. Dungeons I can’t get enough of them and I do love them in video games. While I’m still leveling up in the main storyline I have to say my favorite part so far has been every single dungeon I’ve had the opportunity to run.

The people over at Lost Ark have put a lot of time and effort into their dungeon. They have quite an amazing depth to them without making them long. Their bits of a story weaved into the fabric of them give personality. They even have nice cutscenes throughout them that you can skip if you like.

At least at the lower levels of the game where you are still advancing through the storyline. You get a few different options when encountering a dungeon depending on the type they are. Many times you have a recommended item level for gear to run them. The option to run them on normal or hard. With most having the option to solo and sometimes to match-make to find a group if you wish but not always.

More times than not the first time I encounter a dungeon I’ll run it on normal. You tend to get a few item drops that are upgrades from killing trash, mini-bosses, and the final encounter that you are increasing your item level a decent amount. If things were not that hard I’ll run them again on hard for even better loot. One thing I have appreciated so far about the overall design and look of dungeons is the height changes in terrain. They are not afraid to set up the backdrop to have to deal with the player walking downstairs, climbing up vines on a cliffside, the player descanting deeper and deeper into the madness of the dungeon.

There are a lot of little tricks that are being done to fully encompass the player’s focal points in what they are seeing. Not to mention the attention to detail. They are not afraid of adding small objects, light changes, and other things to ensure the feeling of a dungeon is felt and understood. 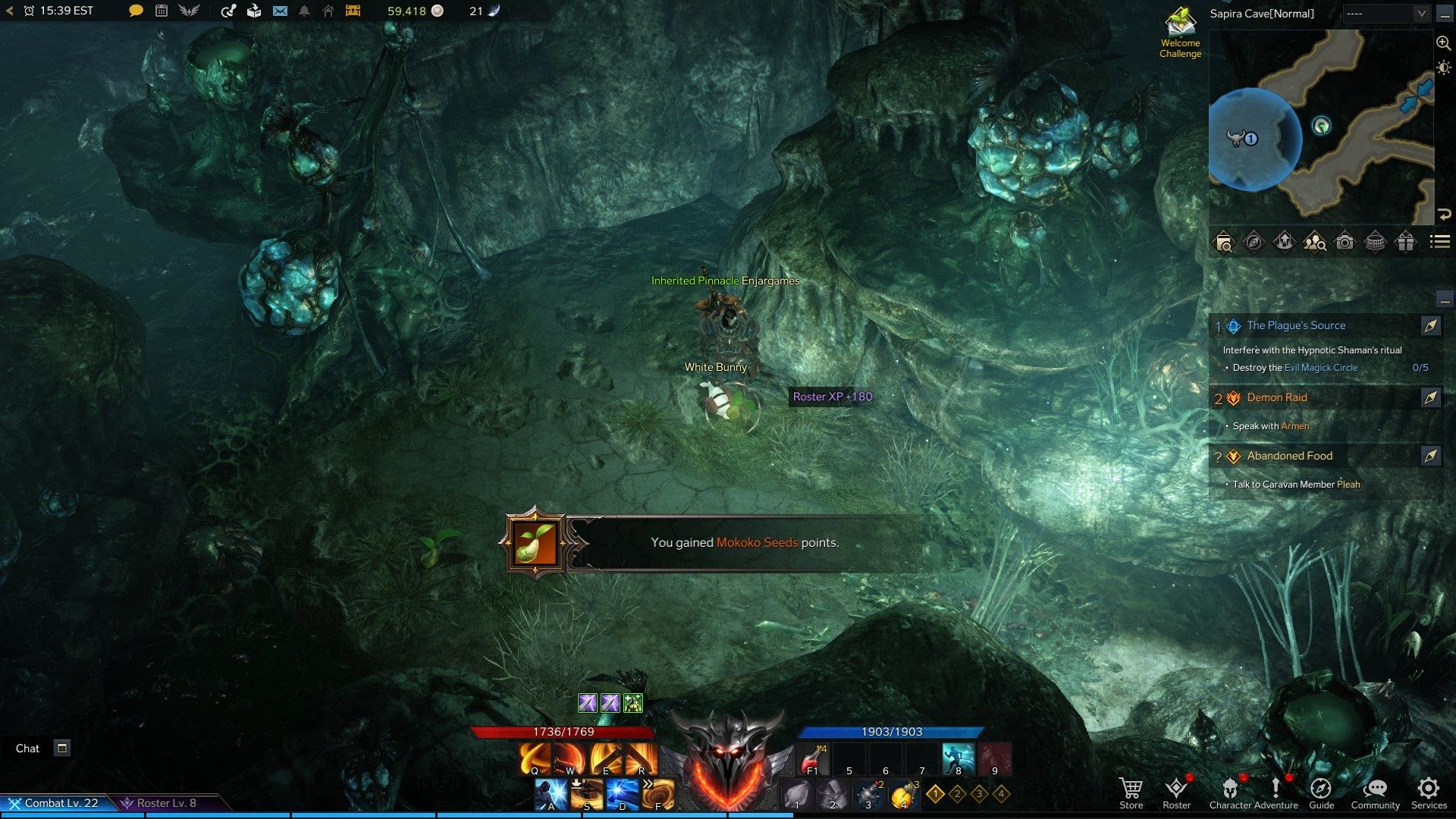 There is also more than meets the eye as well. Sometimes you can walk off the known map into a side area. Some of these are done with leaving the terrain open that most players might not even notice. Others are blocked off with hidden breakable walls or closed doors. Finding secrete areas and chests in a dungeon is quite a thrill. If that is not enough. The game even has “secret” dungeons that you find using a treasure-like map. These tend to be just a small cave with a mini-boss in them and some easy-to-kill trash. The loot while not always great is quite fast to run.

Once you get close enough to the location the map updates to give you a direction and footsteps away. Sometimes these areas are so hidden away you would have never have thought there was a dungeon lurking there. Other times you wonder when passing by a shack, ruins, or other objects in the world if they are hiding a hidden dungeon and you just need to find a map as the key to get access to it.

In the majority of dungeons, you are guided throughout it with a series of mini-tasks that need to perform to move forward. Most of the time that is clearing out trash monsters for another area to become unlocked. Other times there is a bit more lore and having to engage with objects in the dungeon to progress along.

Some dungeons have been more straightforward than others. The game is not afraid to force the player to have to take one path or another to advance. You might even find yourself in a situation where you are no longer using your main classes skills but the ones you have acquired from picking up an object. All of this adds to this amazing flavor that dungeons in Lost Ark can have.

As I fight my way through a dungeon I t keep an eye on the dungeon's map. I want to know how close I’m getting to the final room or a very wide area that looks dangerous. Sometimes I’ll even take a short break to allow my character to be on full health before I move forward to see what kind of challenges the game has for me to face next. The game has also been doing a decent job at trying to keep my guess what is lurking in the shadows of the next dungeon I run. You might be dealing with one kind of game mechanic in one dungeon such as trying to find switching to unlock a door and something different in another like having to avoid traps. You finally get to the last area of a dungeon and in most cases, it’s time to fight a boss. There is that thrill when it’s the first time you have encountered a boss and have no idea about what they will be doing. What kind of moves do they have. What kind of phases there are. If you are even fighting the actual boss or just the lead up to one moments later.

Boss fights do take on a more Koran way of displaying the boss's health. They show a health bar and then it will say something like x7 or even higher. That to me has somewhat been a gauge to inform me of how hard of a fight I should be expecting to have. The more health bars I need to wipe out the tougher I’m expecting.

There is also that moment when you decide to fully commit to getting damage done. No more just dancing around the boss getting out of the way of bigger moves. No more saving your burst status and trying to land the most devastating attacks you can even if you take a fair amount of damage doing so.

If you survive and manage to kill the boss and there is no other tricky afoot you get loot most times. Loot is based on the difficulty of the dungeon you selected. The dungeons encounter while at the lower levels tend to do a decent job keeping you geared enough to move forward in content as they are the main mechanic for acquiring gear. 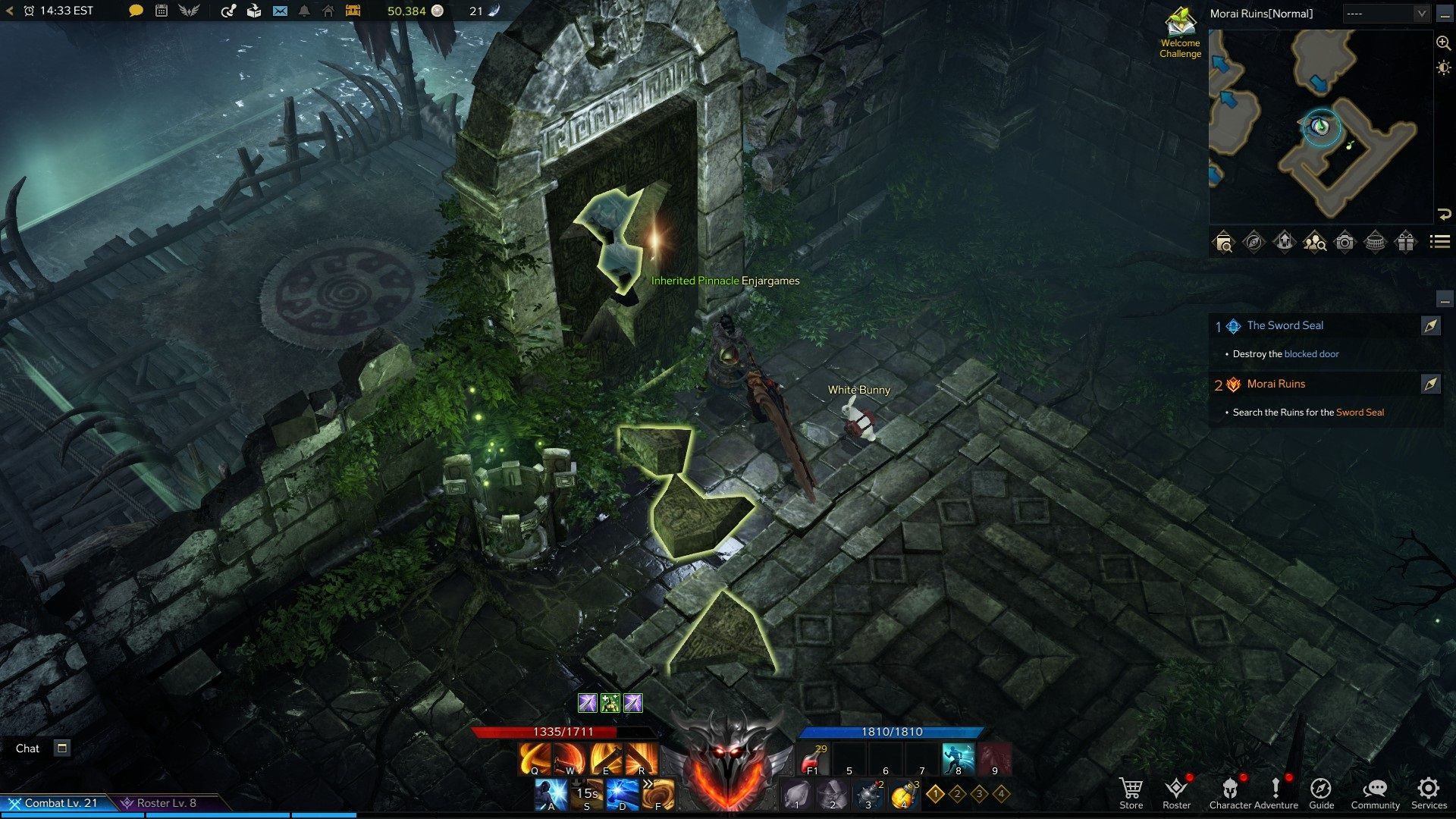 While I do suspect some of my enjoyment of dungeons so far will dissipate a little bit once I start grinding out the same ones over and over again once I get into daily running things at the higher levels. There is always that special place in my heart for them.

It has also been rather nice at least when leveling up of having the option to run dungeons solo. I for one just hate waiting forever for a group to form to run a dungeon during lower levels of a game. While that might not be the biggest issue at a start of a game. Far too many games many years can struggle to have the player base for people to find a quick enough group. Giving you the option and ability to solo ensures when the game ages that is not an issue for new and veterans alike to enjoy the lower dungeons.