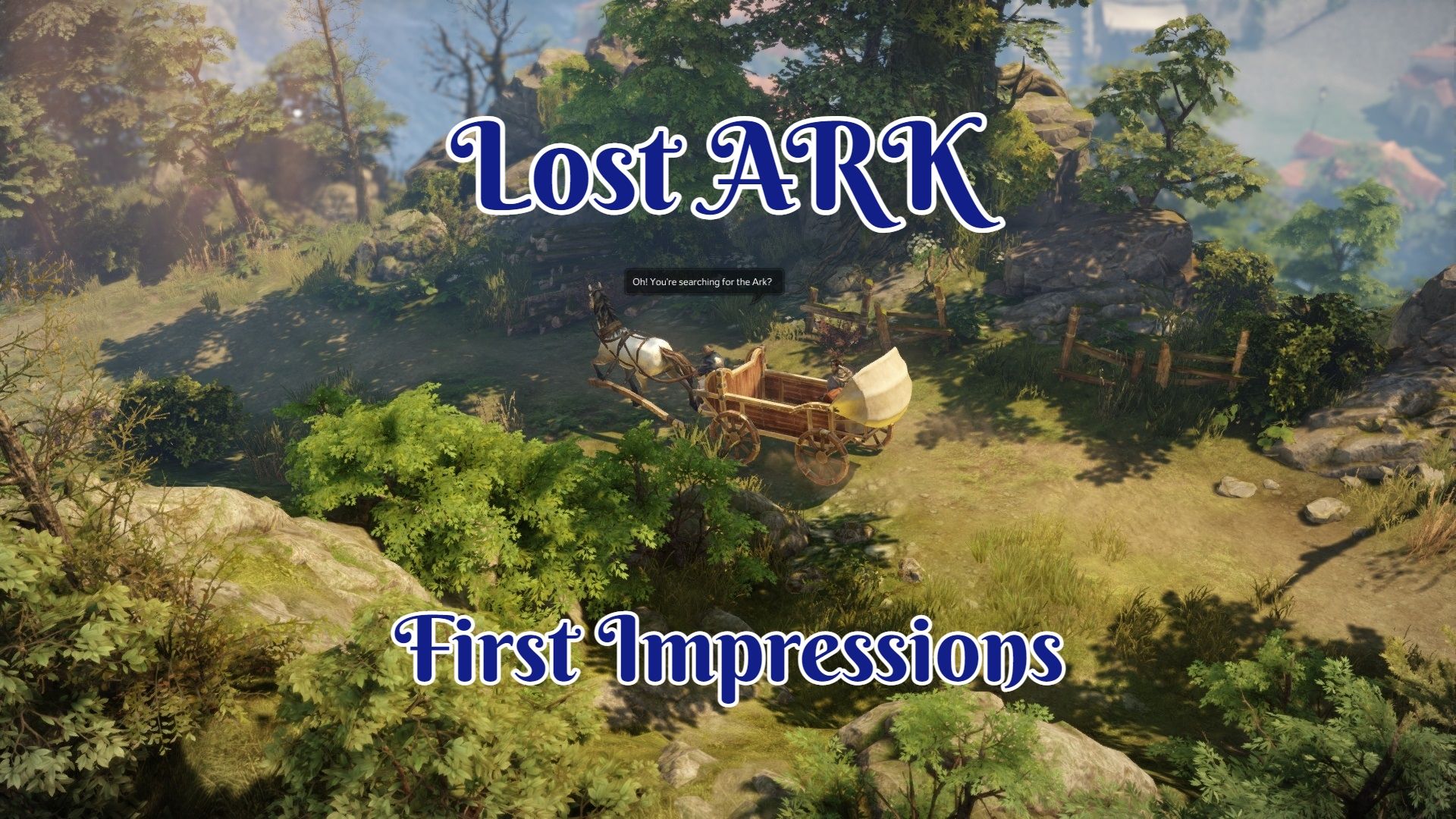 That classic trope of riding along in a wagon I can only hope means I’m about to embark on quite the adventure. So far I have some mixed feelings about Lost Ark. It is an ARPG that was released back in 2019 that has just arrived in western and other markets.

Since Lost Ark already has some age to it I find that is a double edge sword for the game. This is usually a good thing for a game content-wise as there will be lots to do for quite some time at least that is my expectation of things.

That also means if you are not careful it can be easy to overwhelm the player with way too many things. From the looks of it, they are slowly releasing a bunch of content for the game over time depending on a set of player progressions that the game developers are keeping an eye on.

It will also be interesting to see how the game if at all is molded for more western tastes. The game itself appears to have first been released in South Korea which explains some of the overall aesthetics of the game and many of the choices.

I started about a month after this game hit the US. I felt that would give the developers a decent amount of time to work out any major issues. I also had other games I was engaged with at the time and did not want to deal with day one issues.

One thing I have noticed right away since downloading the game is a few gig patches for the past few days daily. I’m not sure if that is going to be a normal occurrence for this game. I was somewhat hoping to have avoided seeing daily large updates this far into the launch. That is however something to keep in mind as a possibility. At first, I thought this game was going to follow a more standard character class system. You start by picking between a couple of different classes. I went with a warrior the first time out as everything else seemed to like it could be a bit squishier and I’ll be playing solo a lot of the time.

What felt odd was that they had you pick an advanced class so soon. When you are starting a game off having a player make such an important decision so early on puts a lot of pressure on the player. They seemed to try and release that pressure somewhat by allowing you to test the different advanced class skills against monsters and a boss in a play area. 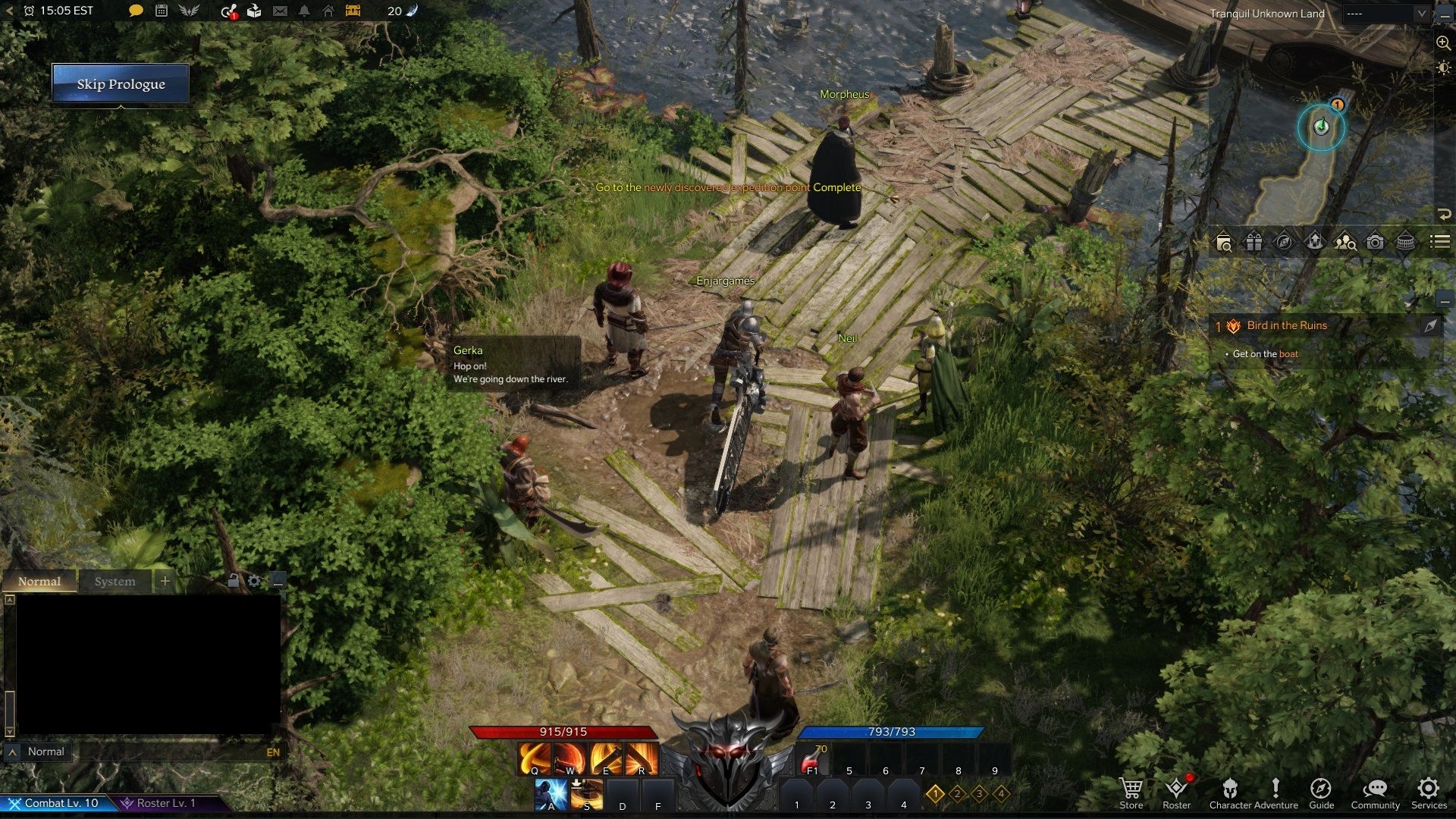 After some storyline, you are then dropped off in a more expected setting. You come into this world on a boat. That seems normal with the exception that you already have a bunch of skills unlocked, have combat level 10, and are put in some large fights where you need to know the skills at least a little bit.

I found this approach of dropping the player into the world without further character progression to be a little off-putting. Instead of having a couple of levels of unlocking new skills and learning what each one does. You just have them.

This leads me to a lot of just button mashing. Since I did not know what I was doing, the game quickly if that had some short text pop up that went away quickly. When faced with large hordes of monsters you are just using everything till they go splat.

Whatever was supposed to happen before reaching combat level 10 if anything at all seems to have been important. I don’t know if this is how the original game went about it. If I somehow being my first time out got to bypass other starter content or what is going on.

This seems to be a reoccurring theme for the game sadly so far for me. I assume since this game has been out for a couple of years there have been many additions to it that are intertwined to the point of removing them at first is not a real possibility. Thus leaving the player overloaded, confused, and just wanting to run off to kill things.

There were many instances before you even got to grasp the basics the game was already unlocking further advanced progression resulting in you needing to make choices. Skills for instance you can level up, pick different empowerments, and other things.

Having to make such decisions based on a limited exposure of using a skill a couple of times is just odd. This seems like stuff you would want to introduce the player to a little while into the game. After they got a feel for things and are not just button mash pushing to stay alive. 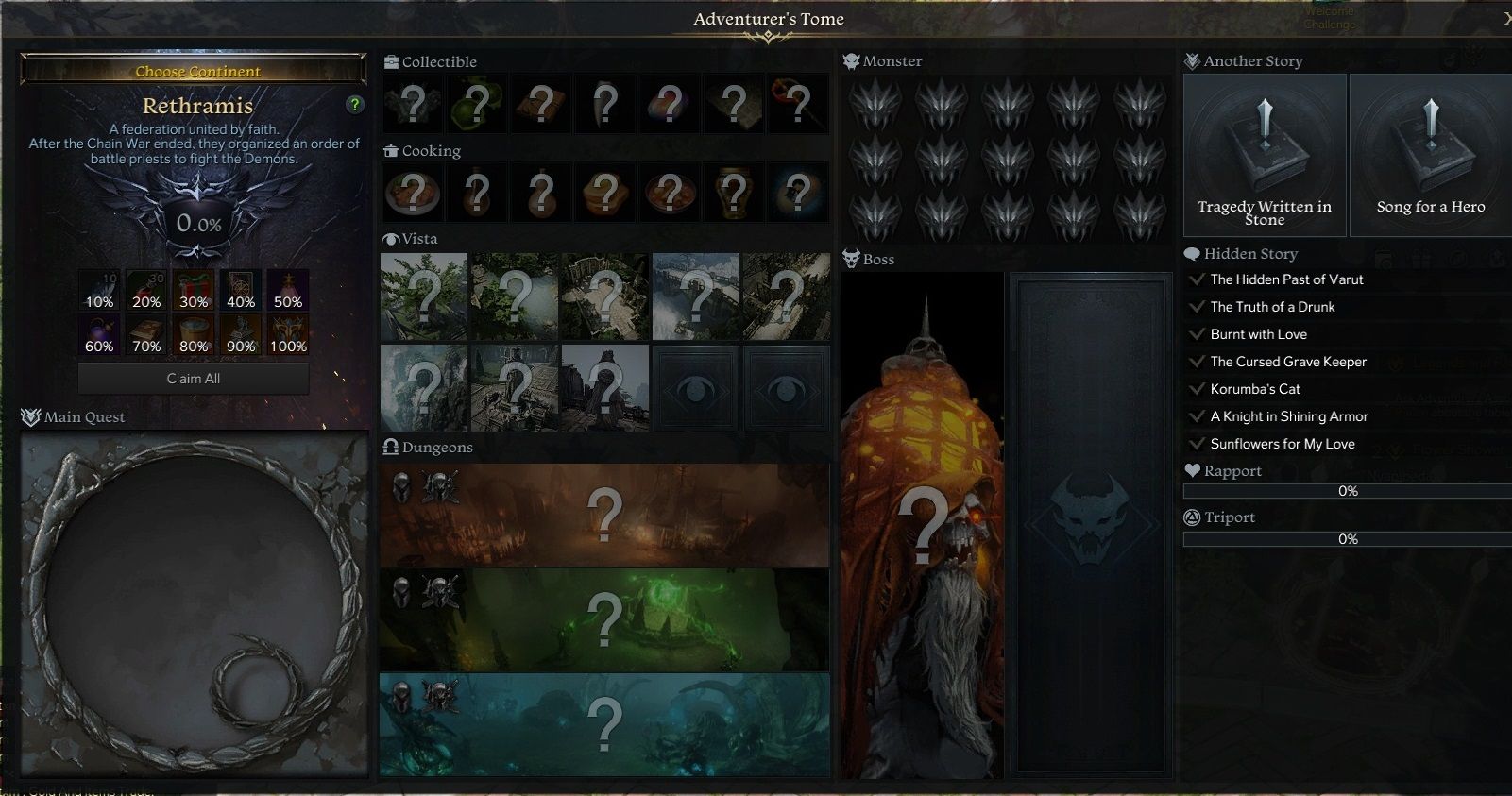 There is also just a lot of busyness going on. You might do one thing and unlock a bunch of achievements all at once. You might have a bunch of notifications indicating new things being unlocked that you need to check out. Opening new windows to be greeted by a massive amount of information as seen above and not having much of a clue what is going on regarding most of it.

All of this is quite strange once you realize the game is not just dropping you off into an open world to do as you please as so far it is all quite locked down. So far my first few hours have been quite the guided tour. You get a quest, you head to a quest location on the map and then you get another quest.

In many instances, you appear to be locked in an area until you further along with the main story. This makes you feel like there was some intent in building the player up to a certain level of understanding. That however is just not evident with the actual outcome.

You can also tell this game has been translated into a few different languages. Most of the time you will have a voice actor read a single line of dialogue when interacting with an NPC. After that no more voice, you are off having to read it yourself. There have also been some strange word usages or the voice actor saying something a little different than the text. 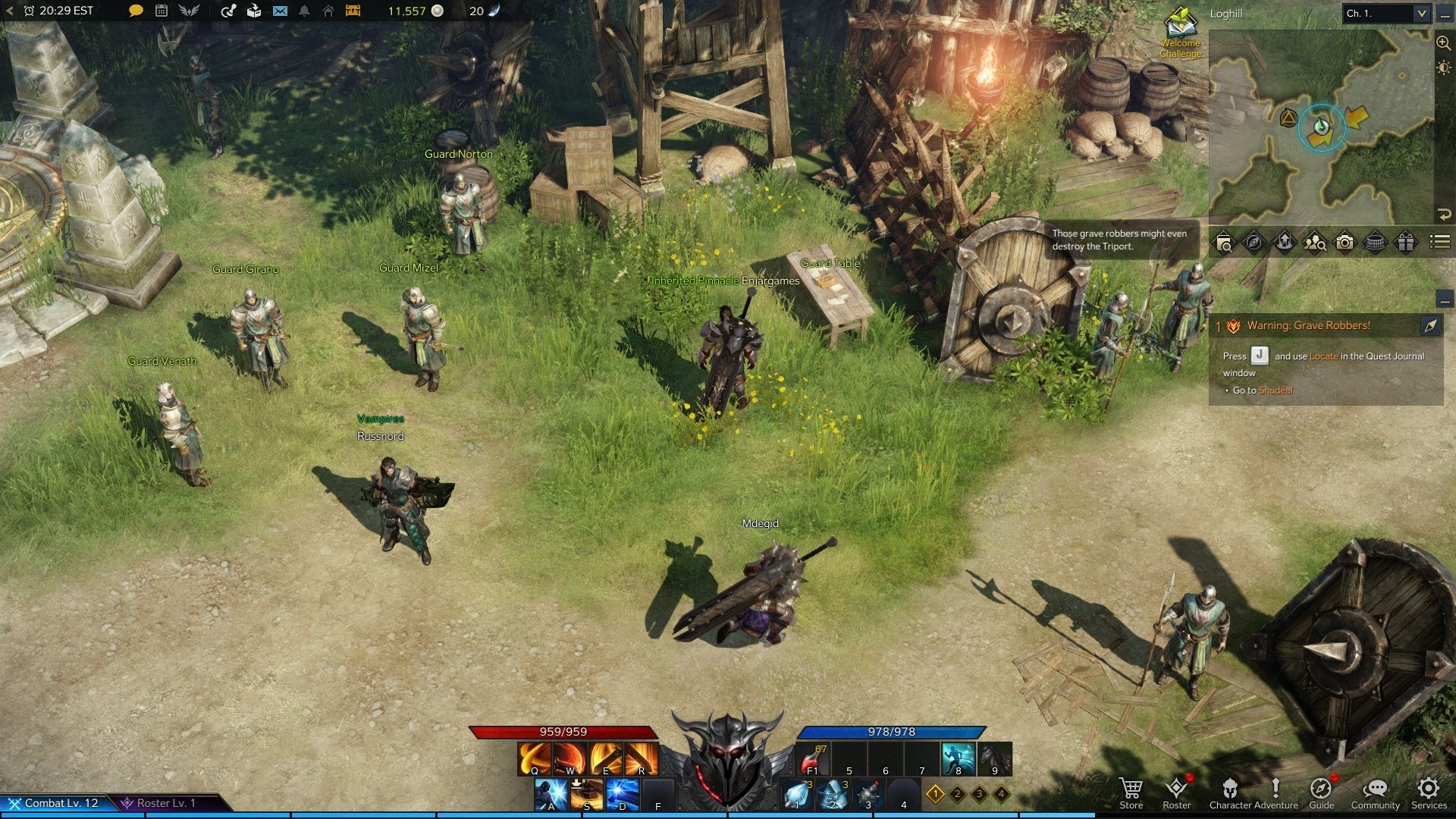 Most of my time spent so far has just been going from quest to quest to quest. I have been picking up all the quests I can see as that just feels like how one would go about things. Killing monsters themselves give little experience and rarely drops anything.

I have not felt like my character was even close to getting killed at least so far. Even when there are massive hordes of monsters and I’m just taking them out like some kind of god. Seldom needing to pop a healing potion. Then again I did start right off the bat having an advanced class that once I fill his gauge up and engage it everything around me is flattened like a pancake. 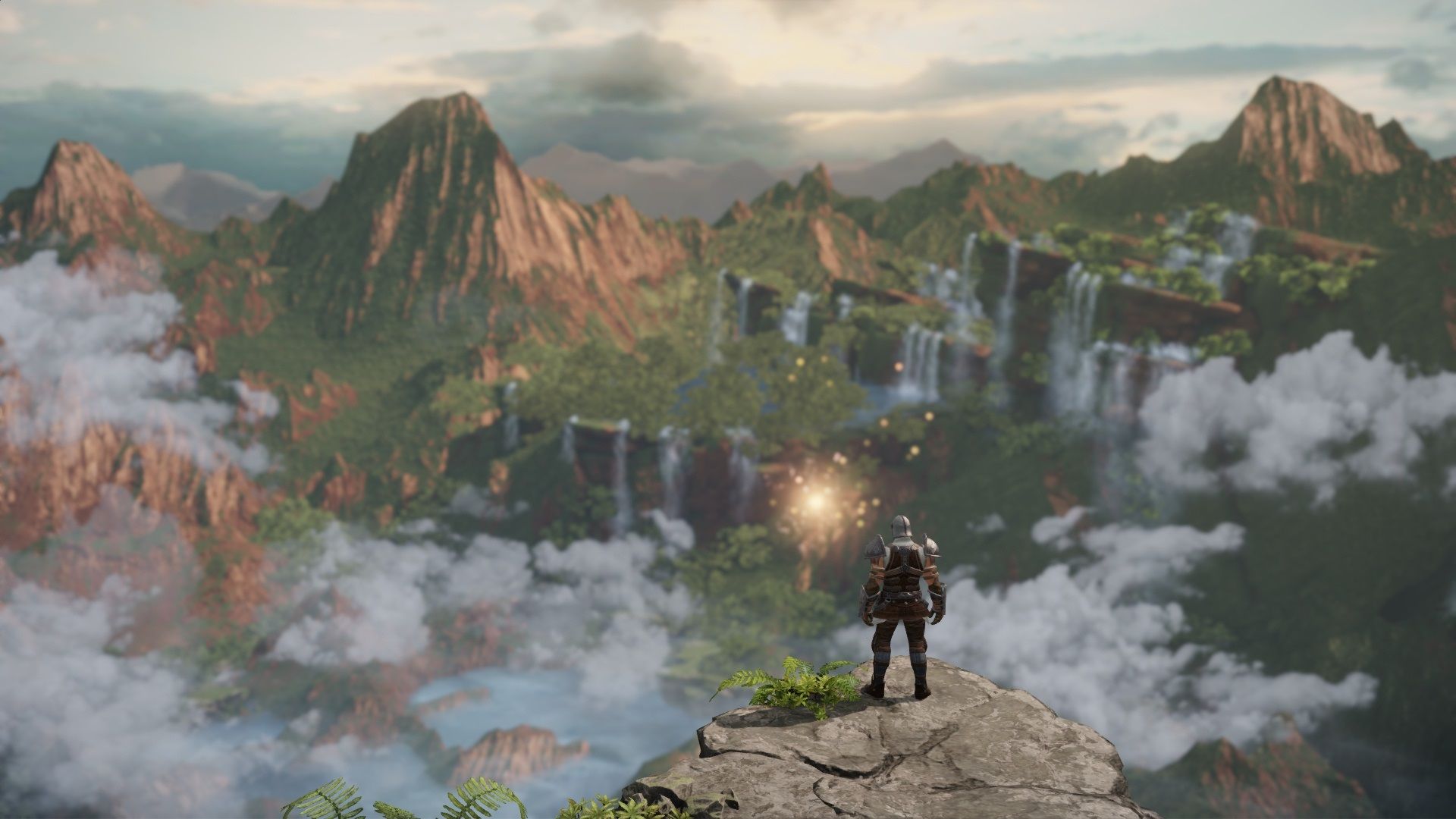 It was an interesting few hours. Hopefully, a lot more of all the windows, features, and stuff becomes more apparent and explained as I get further into the game. If not I’ll have to sit down and try to better understand on my own quite a few things. At least despite some confusion, I’m having a blast.

Screenshots were taken and content was written by @Enjar. Screenshots are from Lost Ark