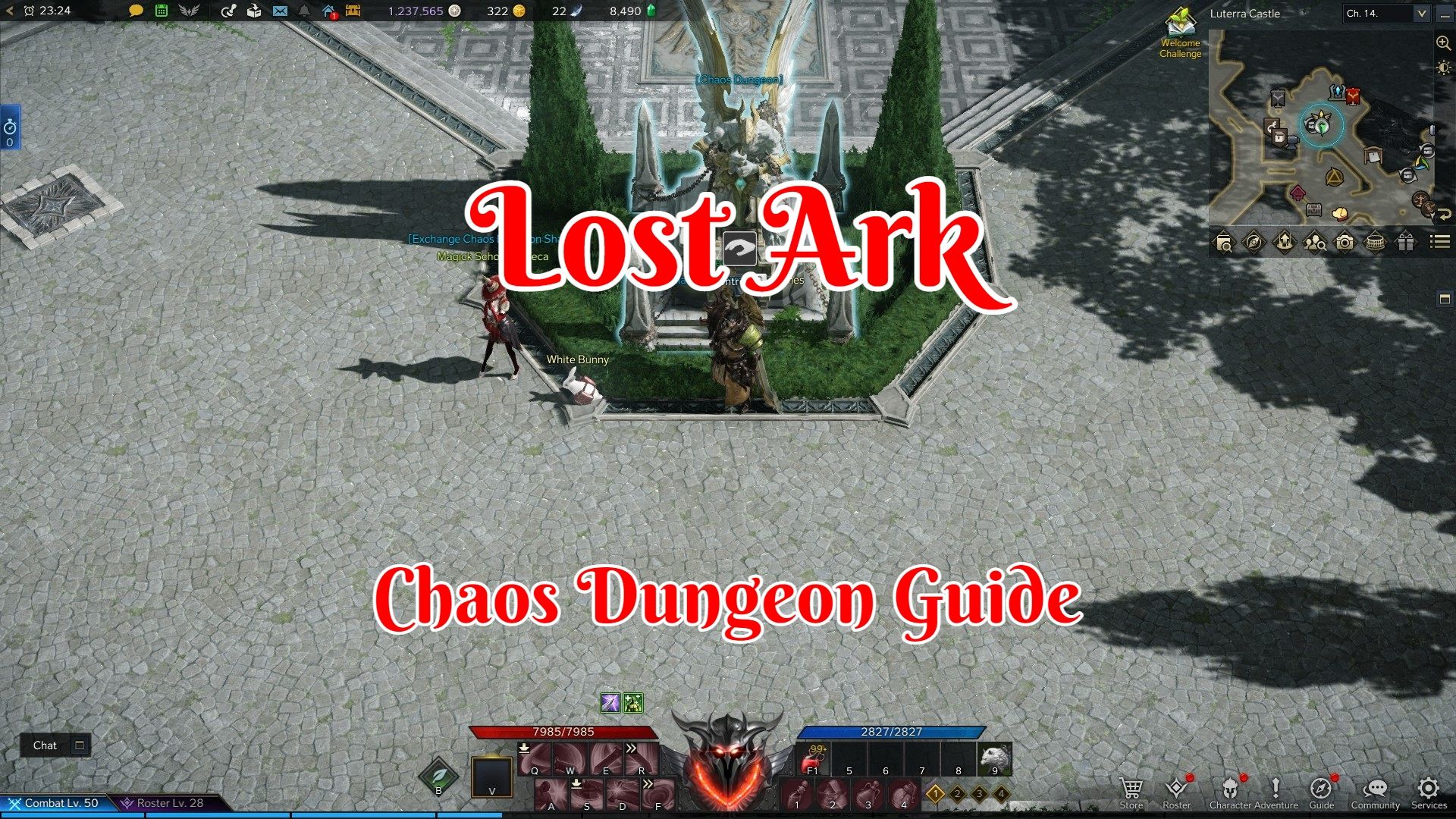 Chaos Dungeon in Lost Ark provides a wealth of honing resources and gear for the player to progress deeper into the game. You can run two a day while having an Aura of Resonance for the highest rewards. They can be done solo or in a group depending on how the player chooses to play. Before you can run your first Chaos Dungeon you must be at least be level 50. Along with having completed the main storyline quest Ealyn’s Request. Finally, you must have an item level of 250 or higher. You do not need to worry about missing this as the game will make it clear when you have unlocked the ability to run a Chaos Dungeon.

Chaos Dungeon itself consists of five different continents that take place on North Vern, Rohendel, Yorn, Feiton, and Punika. Each one also has multiple tiers called Echo and each of these all have their requirements. They can be run from any of the major cities in Lost Ark.

Every day starting a 6 AM server time you are given are granted two entries into Chaos Dungeon until it resets for full loot. Beyond that, you can keep running them it is just less rewarding. This is further talked about in a lower section of how that all works.

Before you enter into a Chaos Dungeon you should have some things set up. It is best to plan to have around 10 to 15 minutes of uninterrupted time to run a Chaos Dungeon. You can also take in normal F1 potions so bring your best just in case you find yourself taking a lot of damage. At the lower levels, you won’t need to prepare meals or anything else. 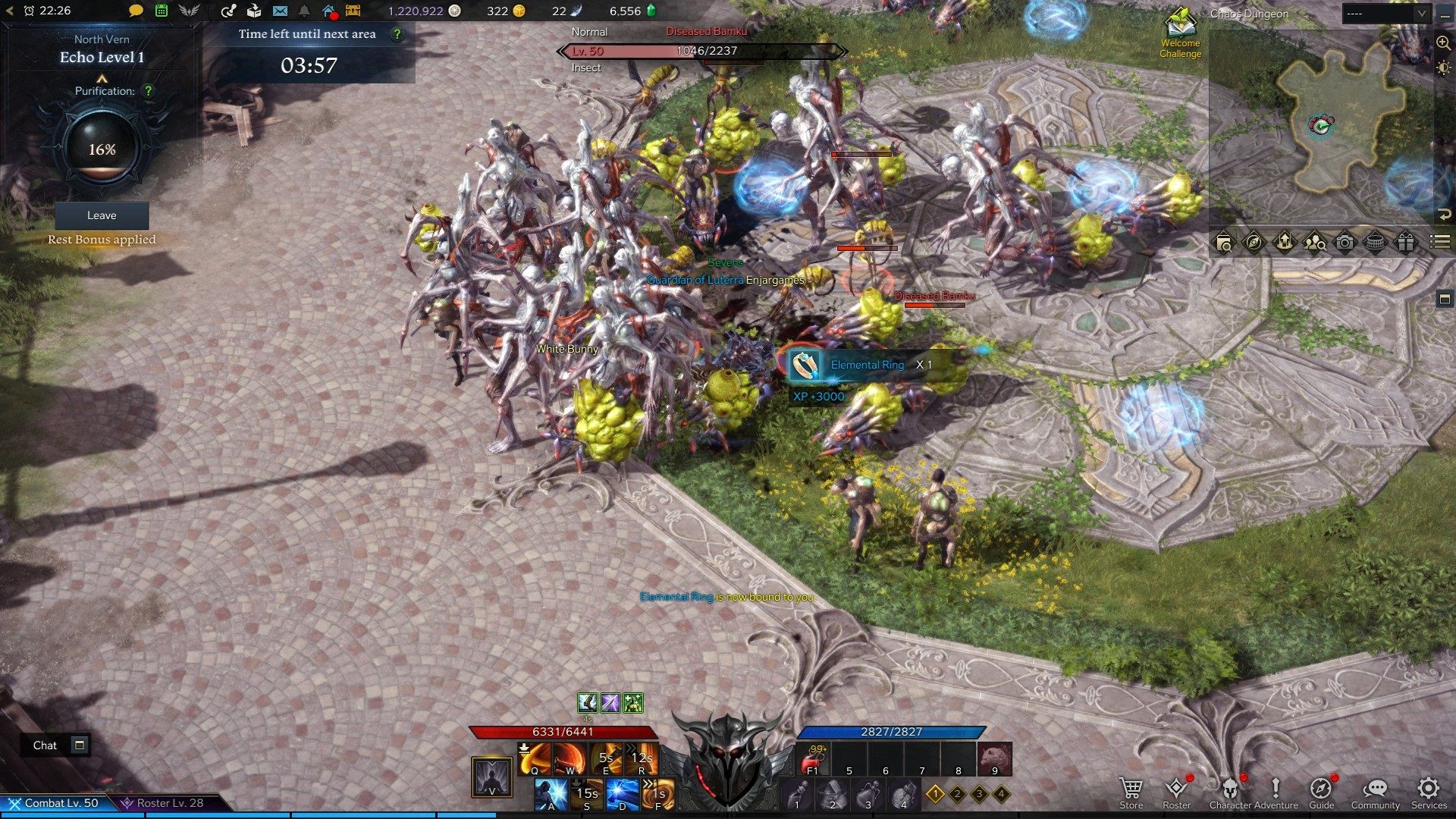 Chaos Dungeon is made up of timed areas. While you only have 5 minutes in each area once you complete that room's objective a portal will open to another room. Once you enter that portal the timer resets to 5 minutes and you continue fighting the hordes of monsters till you run out of time or complete the Chaos Dungeon.

Many players will try and focus on the bare minimum to unlock the portal to the next area. For North Vern for instance the first area involves killing trash monsters to around 18% of the dungeon being finished. In the second area, you have named creatures that spawn that you need to kill till you get a boss. In the third area clearing trash spawns in pillars that you need to break open and kill the names stored inside. Each monster killed will contribute to the Chaos Dungeon’s meter filling up with harder-to-kill monsters being worth more. Once the meter reaches 100% the run has ended. You get a little bit of extra loot depending on if it is your first two runs of the day or not. Afterward, you can select the level to run another Chaos Dungeon or leave to exit.

It is always best to run the highest level Chaos dungeon you can. As the higher they are the more rewarding they become. While they are easier to do in groups you can also run a Chaos Dungeon solo. I prefer to play them solo. Once you do your two daily runs of the Chaos Dungeon in Lost Ark and have consumed your daily Aura of Resonance you can continue. The rewards and drop amount however do change. Often than not there are more productive activities to do. However, there are some reasons for doing so.

Items like rings and necklaces can still drop. If you are just moving into a higher-tier Chaos Dungeon this allows you to continue farming for any drops you have not acquired yet.

However, not everything will still drop, and instead, it gets replaced with a new kind of currency that you can exchange at a vender. At tier one this will be Perception Shard and Disorder Crystal. You can usually expect to get around 100 or so shards and ten or so crystals per run. The vendor Magic Scholar Jeneca that you can turn these shards and crystal into is located right next to the Chaos Dungeon itself. You can even search for her on the map. Magic Scholar Jeneca allows you to exchange for a weekly limit of items. You can acquire honing items such as Harmony Leapstone, Harmony Shard, and Guardian Stone Fragments.

Honing crafting material is not the only thing you can exchange for at Magic Scholar Jeneca. You can also get a necklace, earrings, and rings. These items however are restricted to a minimum gear score to buy them.

Dismantle For Resources From Chaos Dungeon 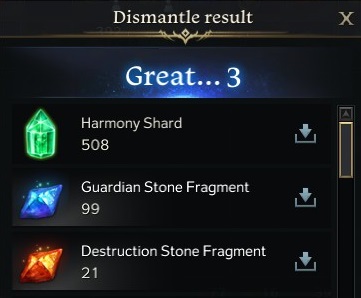 One of the nice things about the gear drops from Chaos Dungeon is that dismantling the items gives you shards and fragments. This can be a nice way to pick up extra harmony shards and Guardian Stone Fragments.

The gear will even continue to drop even after you have had two runs in for the day. While this might not be the most efficient manner to try and farm for extra resources opposed to doing other activities in Lost Ark. It is always nice when you get something extra.

As always before you dismantle anything. Make sure nothing that can be traded that has high value on the market place will be dismantled. Nothing worse than getting a few scraps of honing material from something of high value.

One of the amazing things Chaos Dungeons offers is a resting bonus for those that are unable to play daily. This kind of catch-up mechanic makes it easier for casual players to feel they are not falling so far behind. It can also be great for those that have lots of alts.

Once the player gets to 20 resting bonus the next time they enter a Chaos Dungeon they get double loot. It takes five days the resting bonus is maxed out and you do not collect anymore. While you won’t get as much loot by not running the Chaos Dungeon daily this make it easy for busy players to try and catch up when they can.

Just keep in mind the two daily runs reset every day at 6 AM server time. It will also take you two and a half days to fully use up a 100 resting bonus. So while this catch-up mechanic allows you to do just that. It can also become easy to get behind missing out even further.

More advanced players will take advantage of the resting bonus by having more character than they can run in a single day. They will run their main character daily but their alts only when they have a resting bonus for their runs. This allows them to only run alts when they can get double drops trying to maximize their time spent on alts. 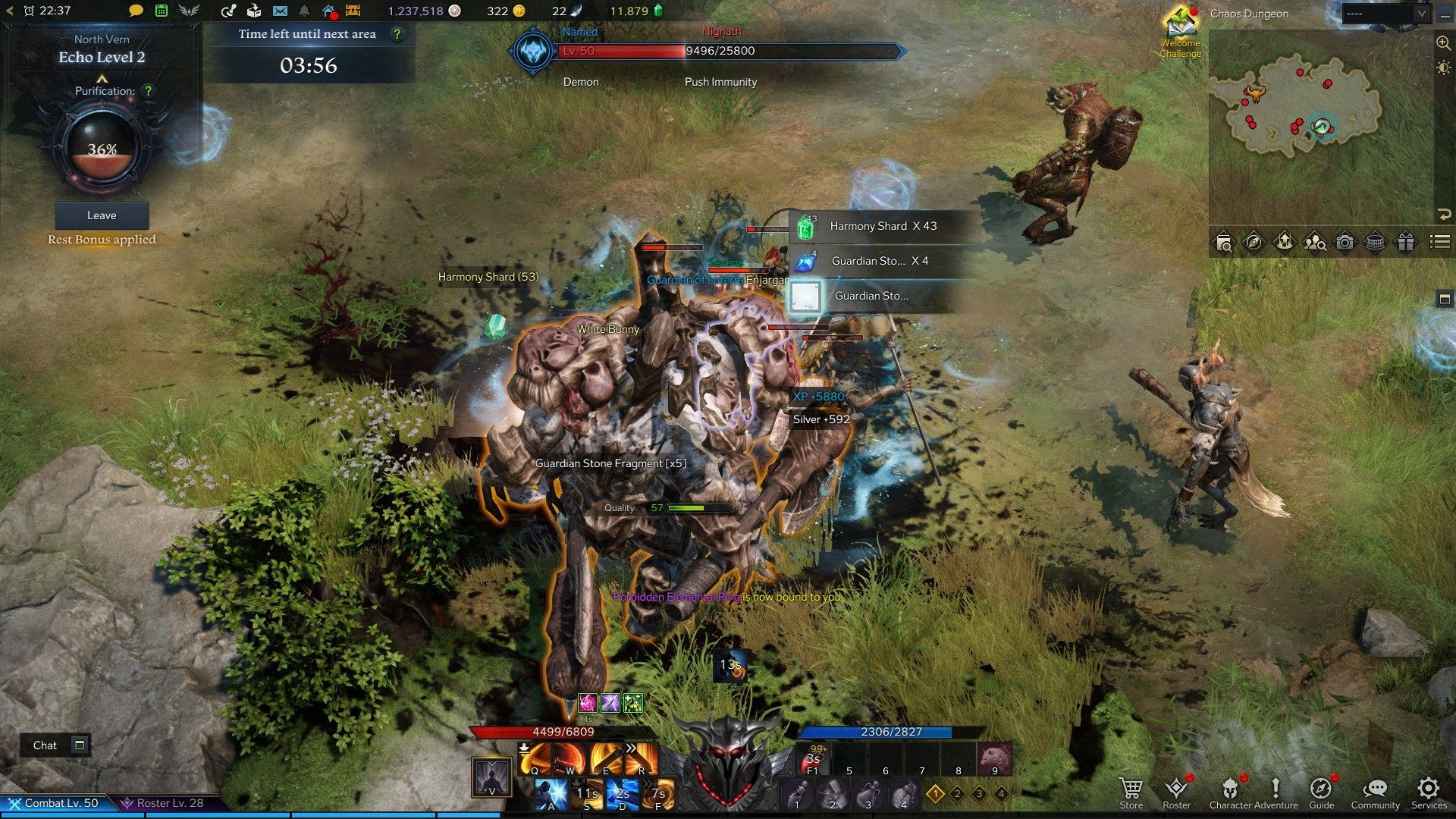 It is nice that Chaos Dungeons do not take long to run. I have found them quite rewarding and a lot of fun with the massive amount of drops you are always getting from mass killing a bunch of monsters. It is also nice not having to log in daily if I don’t have the time and at least have some resting bonus to make up for some of it.