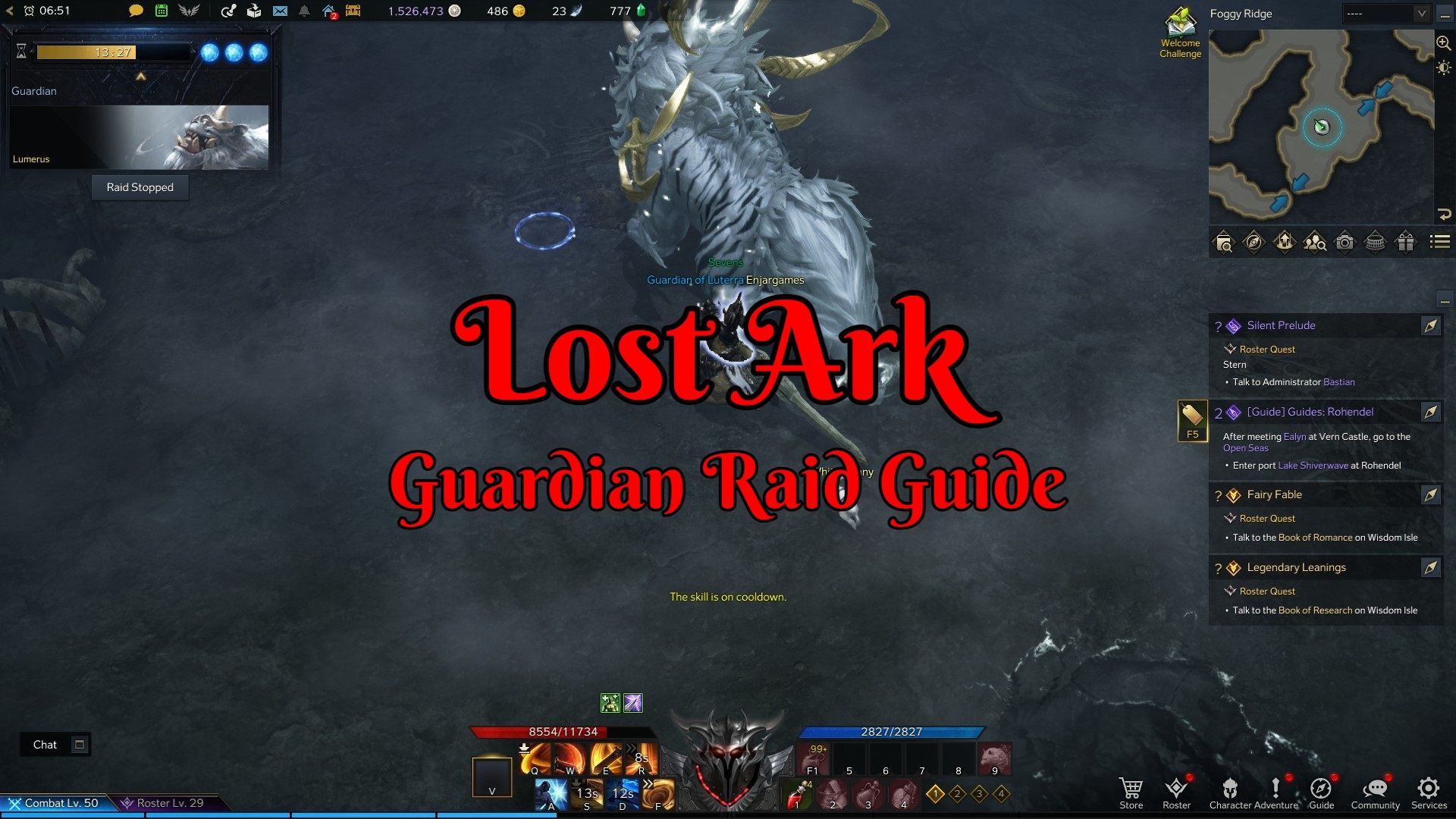 Guardian Raids in Lost Ark have you fighting a boss for honing resources and engravings, skill ruins, and other items. These are 20-minute timed events that can be done solo or in a group. They can be run twice a day or otherwise grant a rest bonus if you miss them.

Guardian Raids in Lost Ark can be more challenging than other daily content you will find yourself running. Instead of fighting off small monsters and being able to die quite a few times the exact opposite is true for these kinds of raids. You are fighting quite a powerful monster that you will have to evade their attacks if you don’t want to die often.

Another thing that makes this kind of content appears more challenging than it is when facing it is the lack of seeing a visual health bar. That is right. You do not get to see how much health is remaining on the guardian itself when fighting it. There is nothing worse than failing one of these and seeing it only had 1% health remaining in the defeated screen.

Many players in Lost Ark will set up a separate preset skill bar that is more focused on single target and counter-attacks than their general use skill bar. This allows you to get more focused damage on the fight. 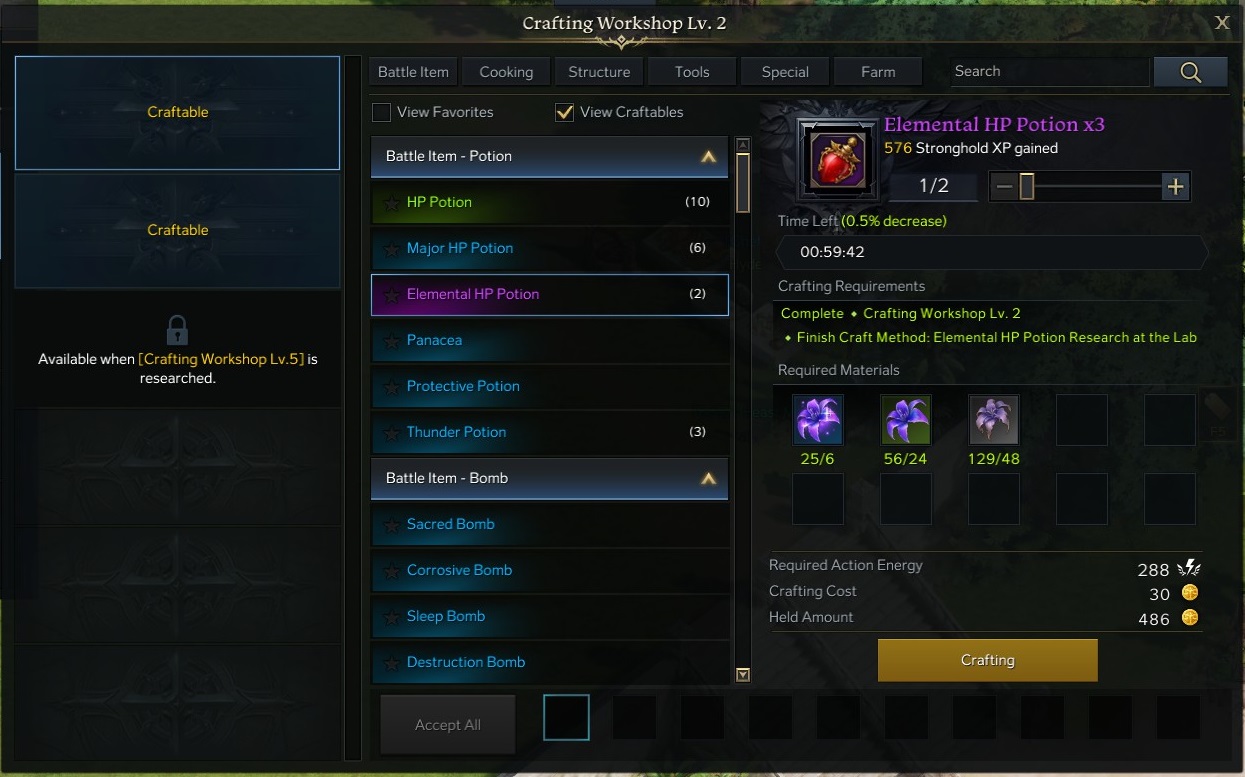 Standard F1 healing potions also do not work in the Guardian raid. You will need to bring in and have equipped percent healing potions. These tend to be more costly to acquire as you have to craft them yourself in the stronghold or buy them from other players for gold. 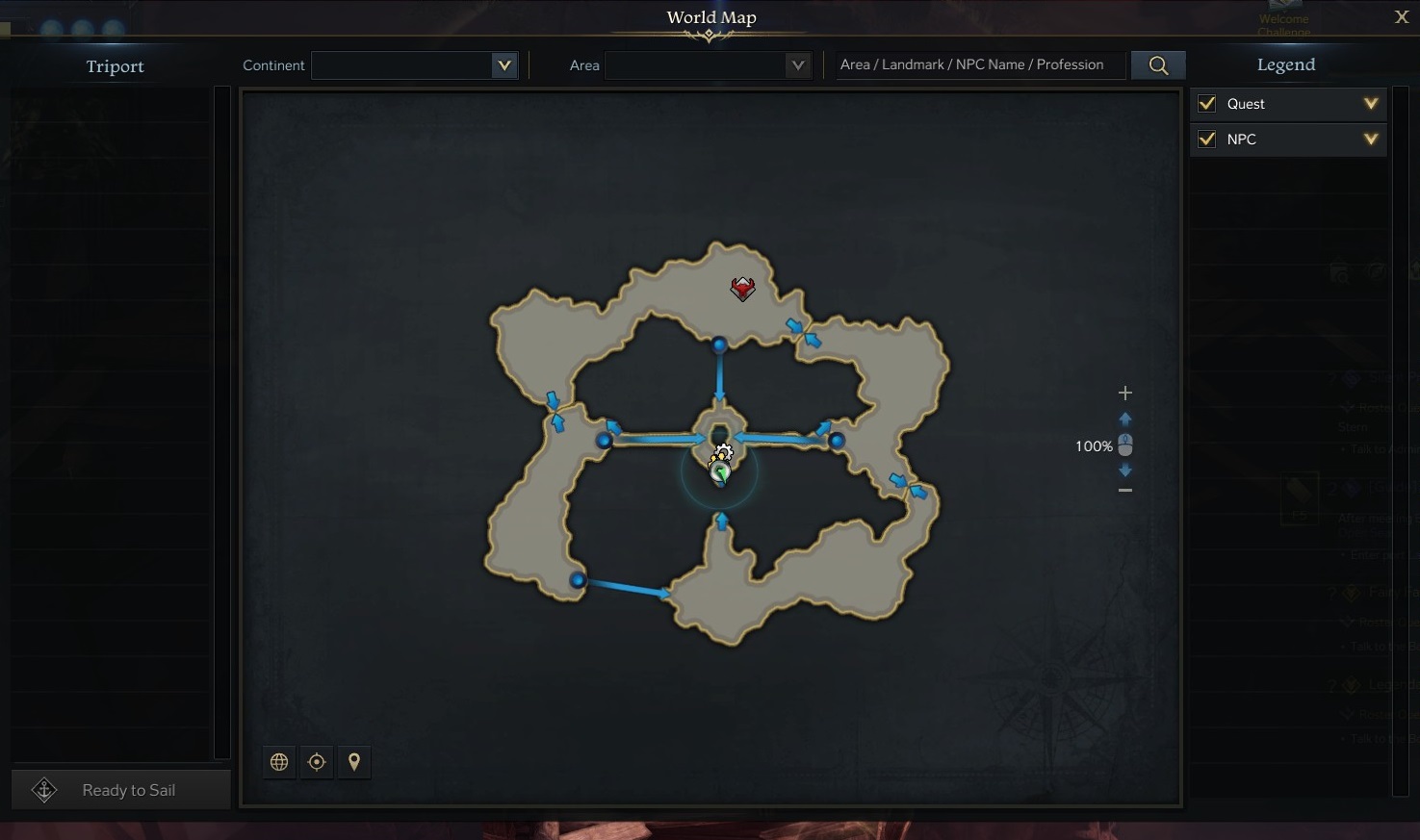 When you enter the Guardian Raid arena you will discover it is quite a large area. There are many possible locations depending on the map layout that the guardian could be on. If you are solo or do not come prepaid it can take up to 5 mins on a bad run to find the guardian each time.

While running these in a group can help cut down the time in locating the guardian to start the fight and again during the second phase. This can still take some time which could end up costing you the fight.

Instead, it is always best to have two flares with you per fight. It will mark on the minimap the guardian’s location for 30 secs. If you are in a group then only one person needs to use them. If you forget to equip them beforehand you can always go to the start of the area and do so at the workshop along with changing out skills and gear. These fights are something that it’s best if you learn all the different mechanics the guardian you are fighting has. Some of them have powerful damaging AoEs while others can stun or do damage overtime on you. Not learning and reacting apparently will cut down on damage you can get in and lead to more damage taken.

While you do have percentage-based healing potions you can only use 5 per refill. To refill if you have enough you have to go back to the spawn in for the zone where there is a workshop. If I’m soloing and know I do not need all my resurrections for the fight I’ll simply use my next death as a chance to respawn at the start to refill my potions.

It is not advisable to use death like that while at a party or if you are struggling with the fight. Each team only has three total resurrections. The same goes for solo players. Any further deaths from that the player cannot resurrect back in while the fight is still ongoing.

Having proper health potion management is always important. It is always best practice to understand when to use a health potion so you are not wasting it. If for instance, you have a 60% potion you should not be using it until you are below 60% health or know you are at risk of getting one shot. 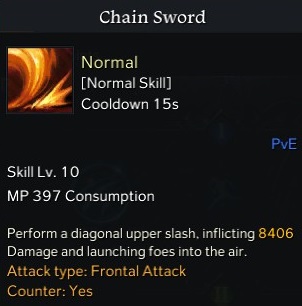 Certain skills have counter listed on them. When you are facing head-on a monster and they turn blue that is your chance to counter the attack they would otherwise do. This stops the monster from attacking for a few seconds and allows you to get some damage done without taking damage. 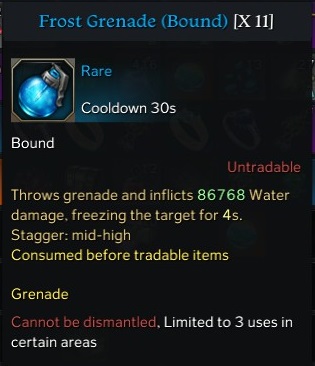 Each guardian has a weakness to a certain type of damage. This information can be viewed from the bulletin board you use to access the raid. This can be quite powerful information as a guardian that is weak to water for instance will take a lot of damage from a frost grenade that deals water damage. Grenades can be a great way to cut downtime of the raid or make a comeback if you get behind.

As for if and when should you use grenades a good sign that you need to up the damage being done if you are down to just three minutes left. You can only use a grenade a couple of times and they have a thirty-second cooldown. It is best not to wait till there are only seconds left to use them if you need to. The guardian will respawn elsewhere at around 1 minute remaining making it quite hard depending where it spawned to get to again.

Once you learn the ins and outs of each guardian fight. Along with when to counter, health management, and using grenades. The fights overall do become easier to do with fewer deaths occurring if any at all. 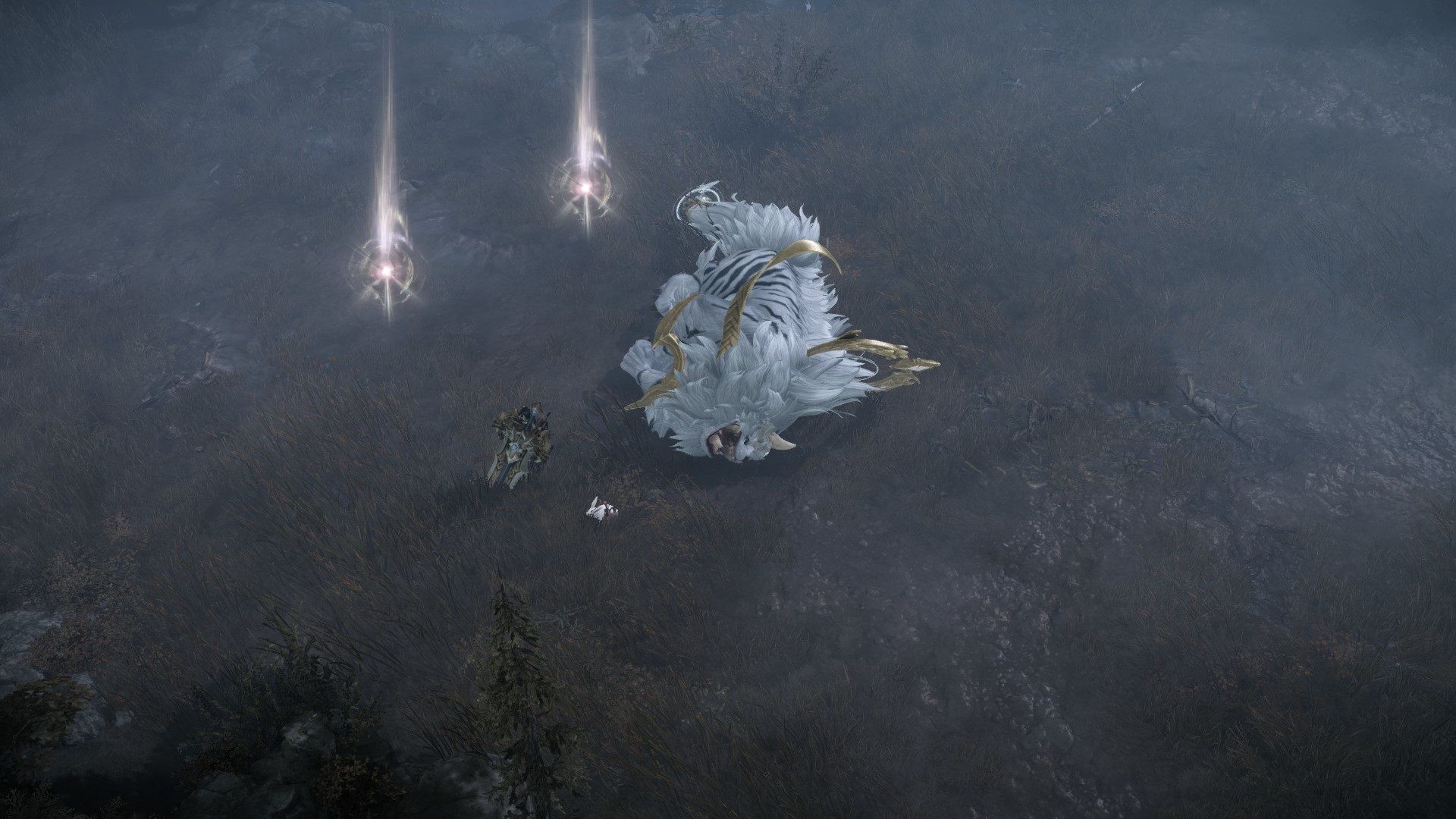 Once the guardian has been killed do not forget to loot. If you were using the resting bonus then you have two guardian souls to open up to see what they dropped as seen in the screenshot above.

Each day you can run two guardian raids for loot that drops from their souls. After that, you get only the reward for the completion of the raid and nothing else. As such it is not worth the time to run these once you use your daily runs.

The main reason for doing so is to practice a fight. This can also be a way to see if you can kill a harder guardian without wasting your soul drops for the day if you fail to kill it.

Each day you do not collect a guardian soul you get 10 resting bonuses each. This works similar to how the resting bonus works in Chaos Dungeons with the major difference being souls instead of Aura of Resonance. This is covered in quite a detail in my Chaos Dungeon guide. 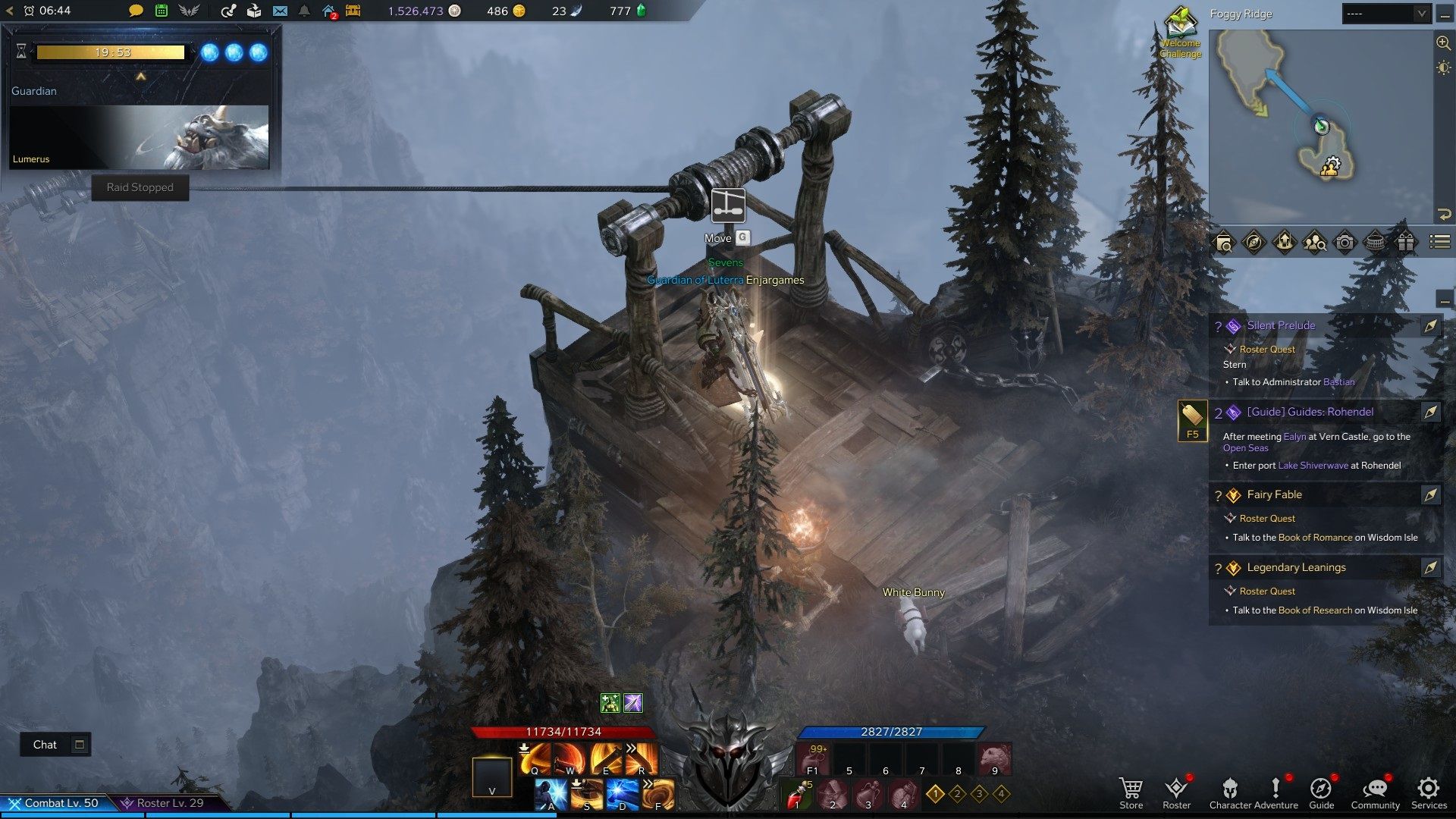 I have found Guardian raids a great way to pick up some honing resources while starting to learn the ins and outs of boss combat and fighting in Lost Ark. This seems to be a leadup to much harder content down the raid. I prefer to solo these but I can understand why players would want to do such a challenge with a group.