The Secret Island Water Temple in Entropia Universe is the easiest of the temples on the island. You do need to find a Sacred Water Skull before you can enter the temple as it is the key. The creatures to farm for it are a great test to see if you are ready for the temple itself. 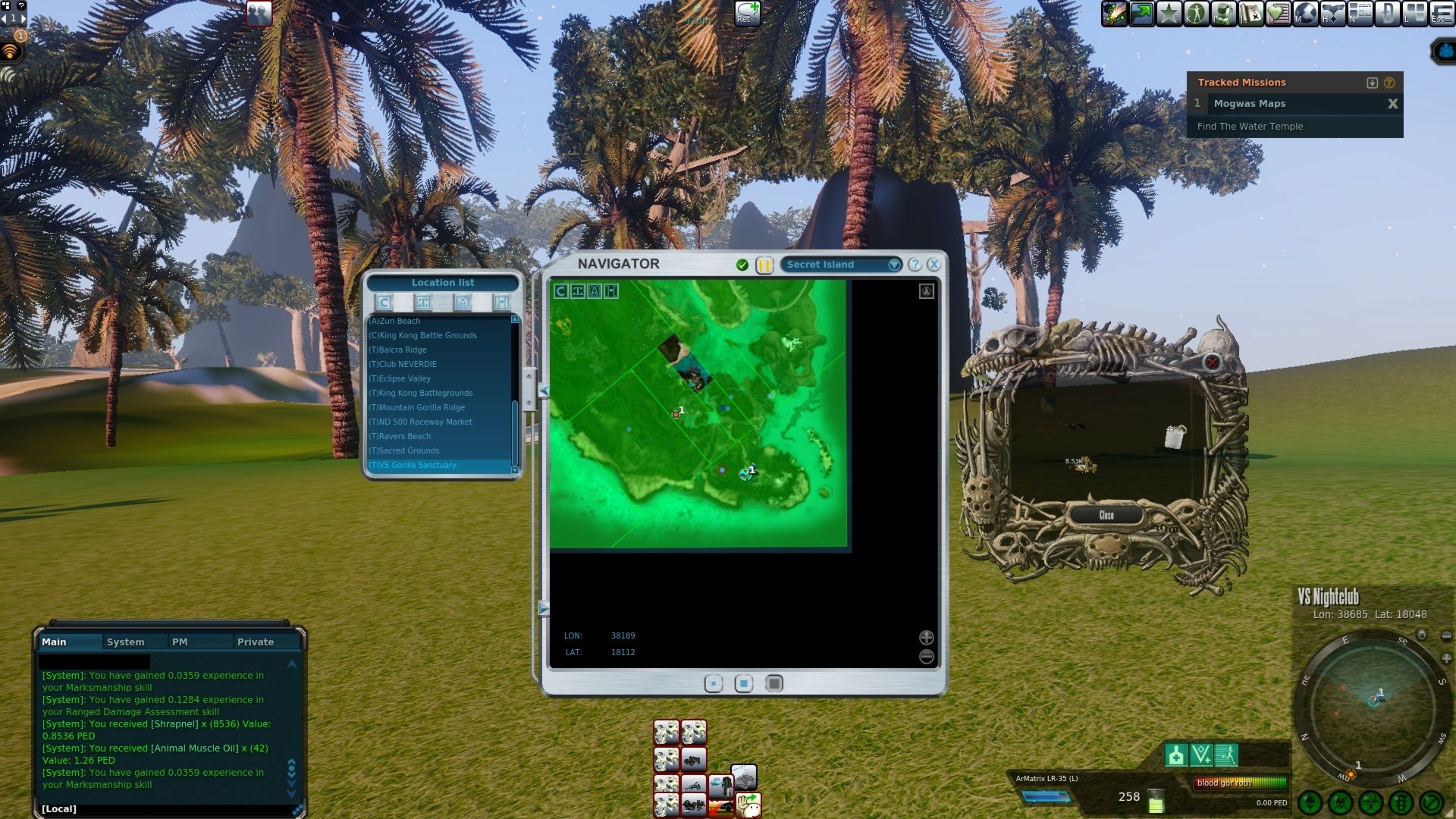 Not that far from the VS Gorilla Sanctuary teleport you will find level 7 Island Gorillas to farm. This can be a great place to farm up some CND Bananas; as well as, try to get the Sacred Water skull to drop for the temple.

While you are here these are great creatures to test if you are ready for the water temple itself. If you get aggression on three of these at once and it’s not a struggle for you to handle. You should be more than ready to face off what lurks inside the water temple. The drop you are looking for from Island Gorillas is called Sacred Water Skull. They tend to sell for 150% markup or higher on the auction house if you would prefer to go that way. Since Island Gorilla is level 8 and this is a 10 PED drop it. You can expect these to be a bit hard to get. To get the location of the Water Temple itself you can talk with Mogwa who is inside the Island Girl Spa located at (37428,19589). Keep in mind this NPC will only give you one location every hour. 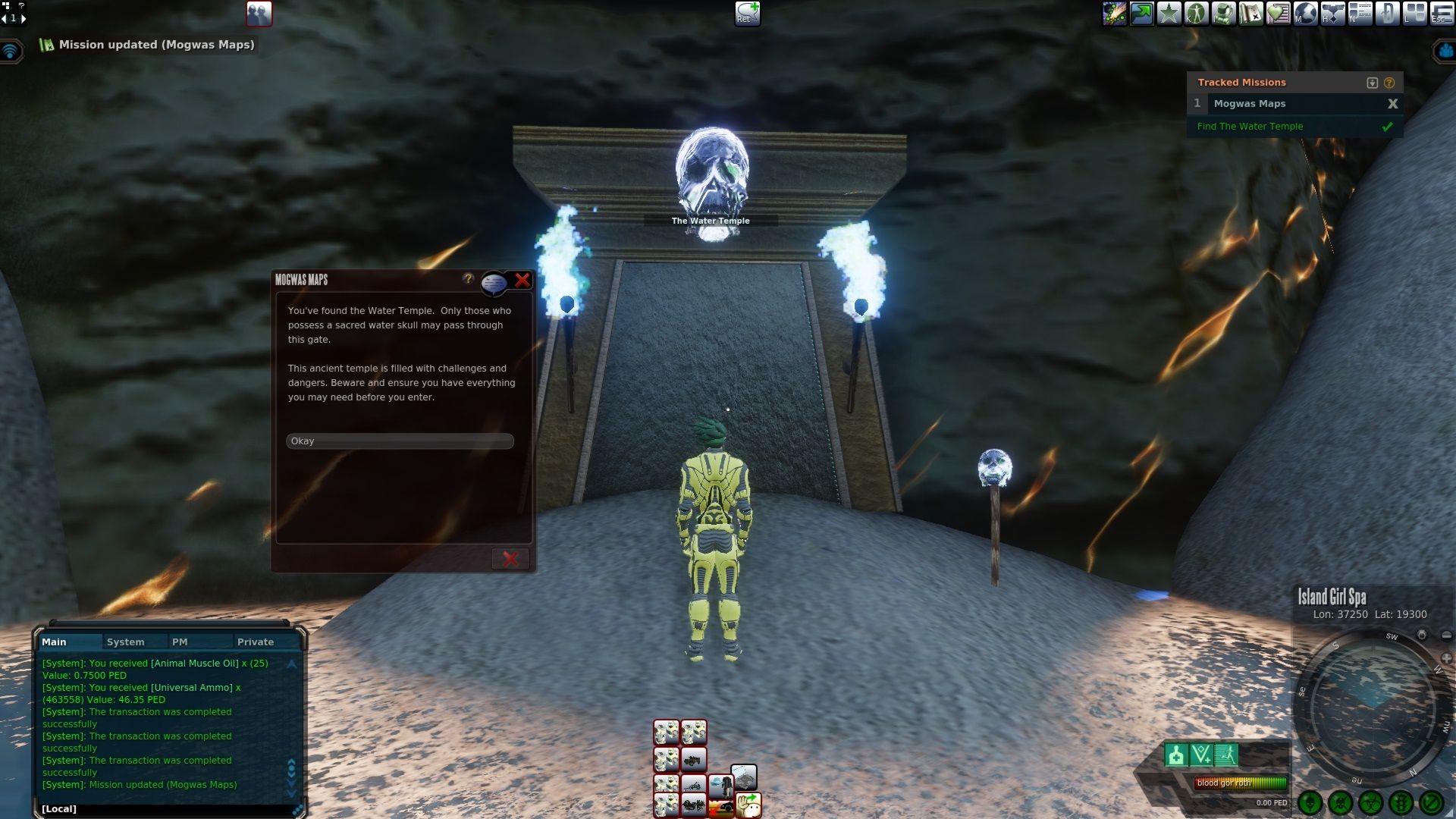 You then just need to follow the waypoint to (3725, 19300) for the Water Temple location. The Sacred Water Skull will be consumed on entry. So make sure you are ready before clicking on the door to enter.

As far as what you should expect. I found myself wearing Adjusted Pixie armor with 2A plating more than enough to the point I only healed to top off my health once. I believe I spent around 76 PED in ammo. With very little decay since I killed 43 Level 8 Pirate Ghosts and 1 Level 10 Water Temple guardian. This ended up taking less than 14 minutes to clear the temple. 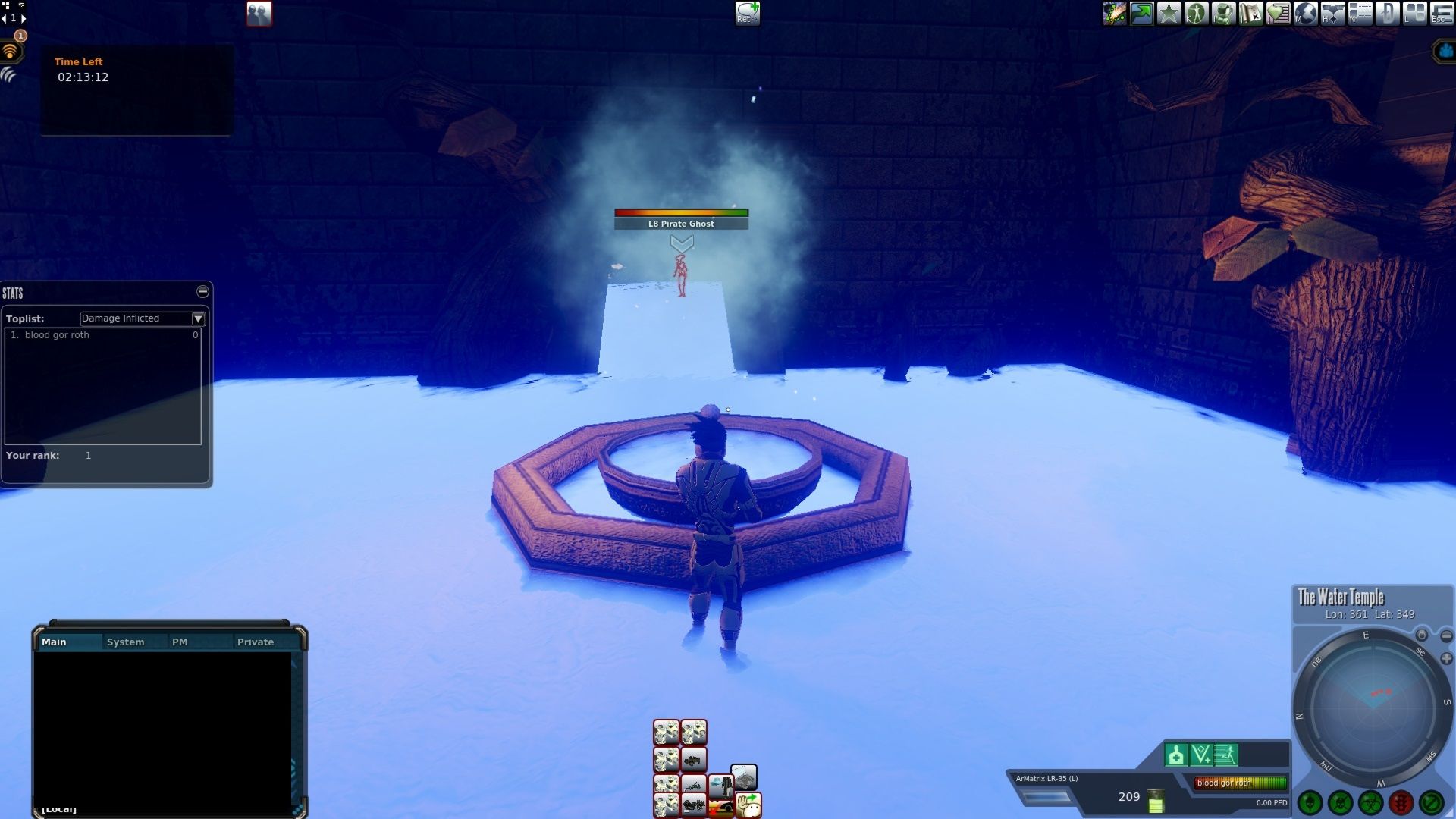 Once you are inside it takes a moment for the rest of the instance to be ready. You get around 2 hours and 13 minutes to clear the Water Temple which is more than enough time.

The Pirate Ghosts move quite quickly in a very diagonal pattern. In some areas, they also appear to be tethered to the room they are in. While you can do your best to pull them single they tend to get aggression quite easily and will sometimes follow each other in. So expect to get adds on you on occasion. Like any instance, you don’t get any loot till you finish it at the end. There are several long hallways and larger rooms to need to be fully clear to move forward. 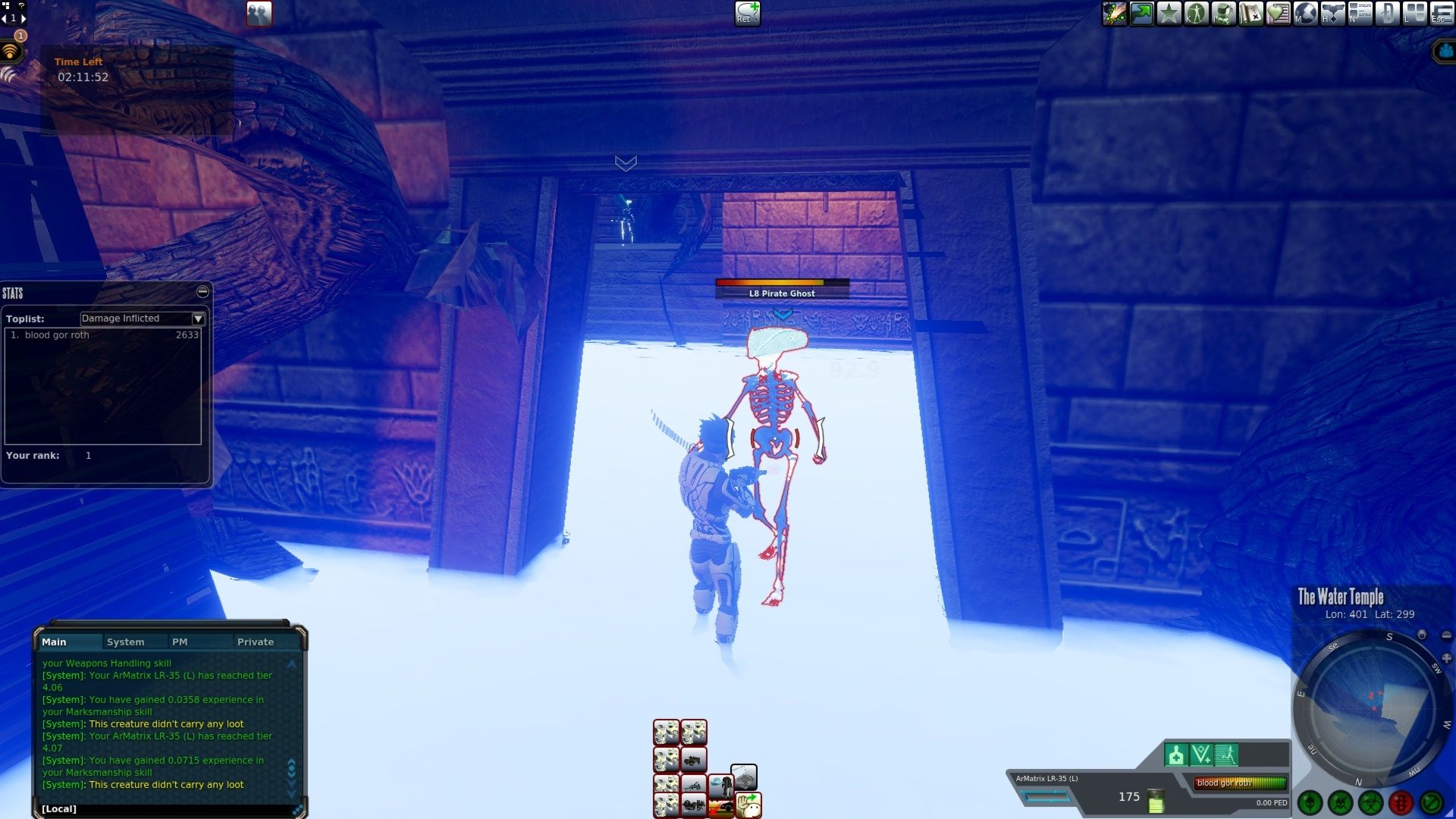 Some areas will be a little trickier to pull in the others. The Pirate Ghosts tend to want to go for the corners in places you do not have a light of sight in while being able to still hit you. While I did manage to pull this one solo not every spot in here is possible. Throughout this place will be several doors. Sometimes you need to click on them, other times, they will open once you have cleared out an area. Eventually, you will clear to a larger room that has a wave of respawns. If you have been struggling a bit make sure to fully heal before killing the last one in the room that will trigger the next wave. You can expect to get several levels of 8 Pirate Ghosts on you at once. After clearing through some more hallways you will end up in another room of having to deal with waves of Ghost Pirates. This is the final room before the boss.

You will know for sure when you have reached the boss's door. As it will say checkpoint reached and the door has skulls around it. The boss of the Water Temple is a level 10 Water Temple Guardian. While he has more health than the other creatures in the temple. He was hitting me for about the same amount of damage. I did not have any issues with him and took him down decently quickly with an Armatrix Lr-35 (L). After that, you have the treasure room. Looting the statue will end the instance and reward you with the loot. Since I did not loot a Water statue assuming this is how you get them. I found the loot to be rather underwhelming as I took the loss from the ammo spent and the 10 PED TT key used since I only got 68 PED in loot. I got a water essence which I have no clue still what it is for and some Pirate Doubloon.