Secret Island in Entropia Universe is a little bit of a strange place. You can’t just click on the dropdown menu on Rocktropia and click to go there. There is even a bit of confusion on where it is.

What makes Secret Island strange is when you go to download the extra files for the area they are not Rocktropia files. You are downloading files from Next Island (NI). On top of that when you get there you will notice NI missions, codex, and even vendors. 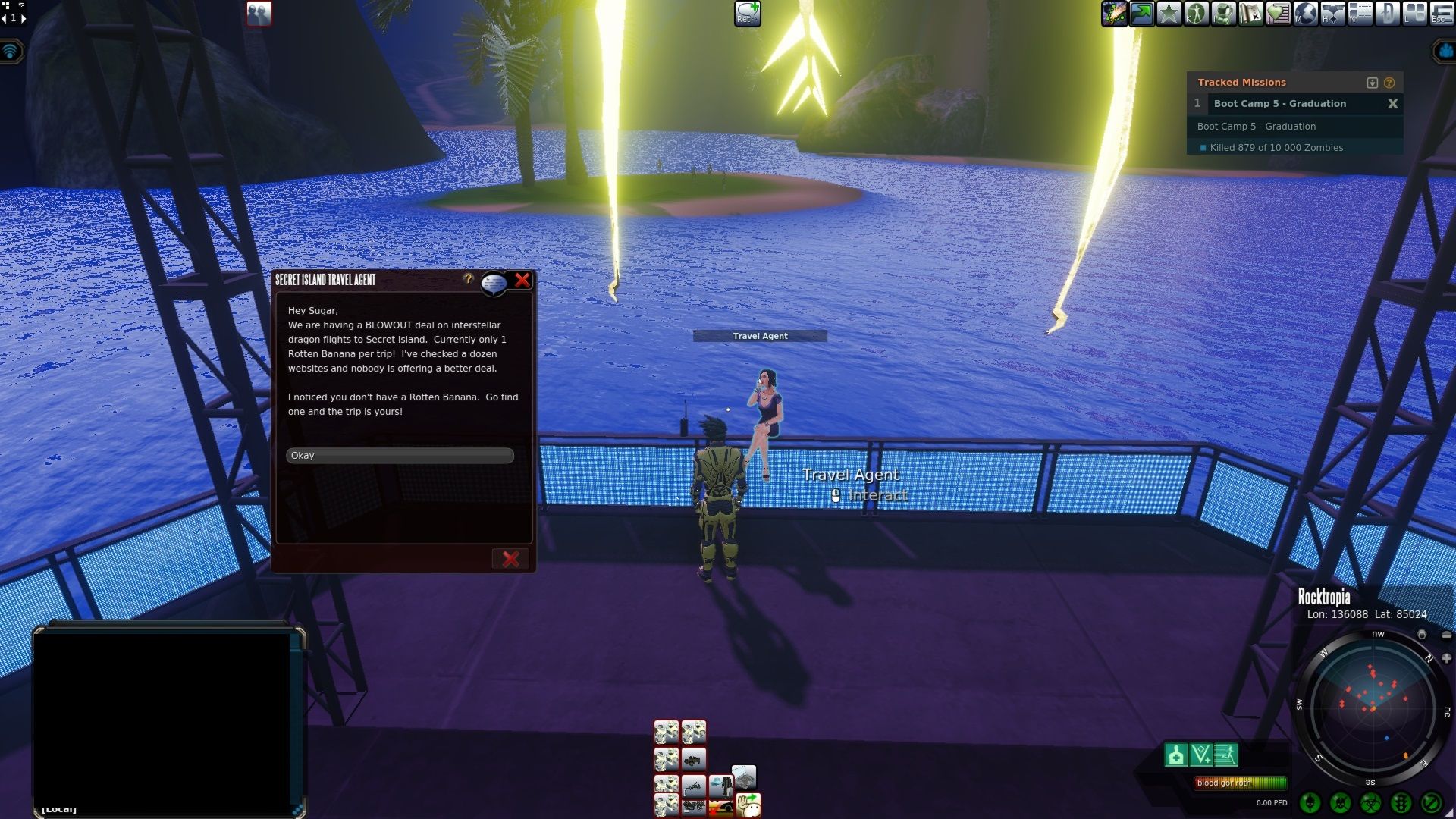 So how do you get there in the first place? You need to talk with Secret Island Travel Agent who can be found at (136087, 85024) and is not that far from the CND lagoon behind the club. Look for the giant interstellar dragon.

Secret Island Travel Agent will tell you the price is 1 Rotten Banana. Keep in mind you can only use this once every hour. Also once you get to Secret Island there is a price to get back which you can farm the drop from gorillas for called CND Bananas.

As far as getting the Rotten Bananas on Rocktropia you can either farm them off zombies or buy some from the auction house. From what I can tell regarding the drop rate the bigger the class of zombies the better chance you have at looting Rotten Bananas.

Since I have not hunted Zombie Biker Outlaws in quite some time I thought I would go for those. They do have 1k health at the lower end and can pack quite a bunch.

Regardless of what zombies you are going to be hunting you more than likely will be going up to Zomhattan. One thing you will notice when dealing with zombies is they tend to be quite high density. If you are hunting ones you can’t quickly take down you are better off going to the edge of Zomhattten and clearing them that way. Just sitting outside of the teleporters in there will be quite hard. As there is not much room between gun turrets and a place you can find to pull and clear from. You will more than likely end up mobbed to death or moving too close to a turret and losing a kill. As I was when trying to find a place to camp. Once you get to an ideal place you should pay attention to the kinds of drops you are getting. On my first hunt out I was getting nothing but Rotten Banana Bunch. Those are the wrong kind. There is no way to use them for what you need. 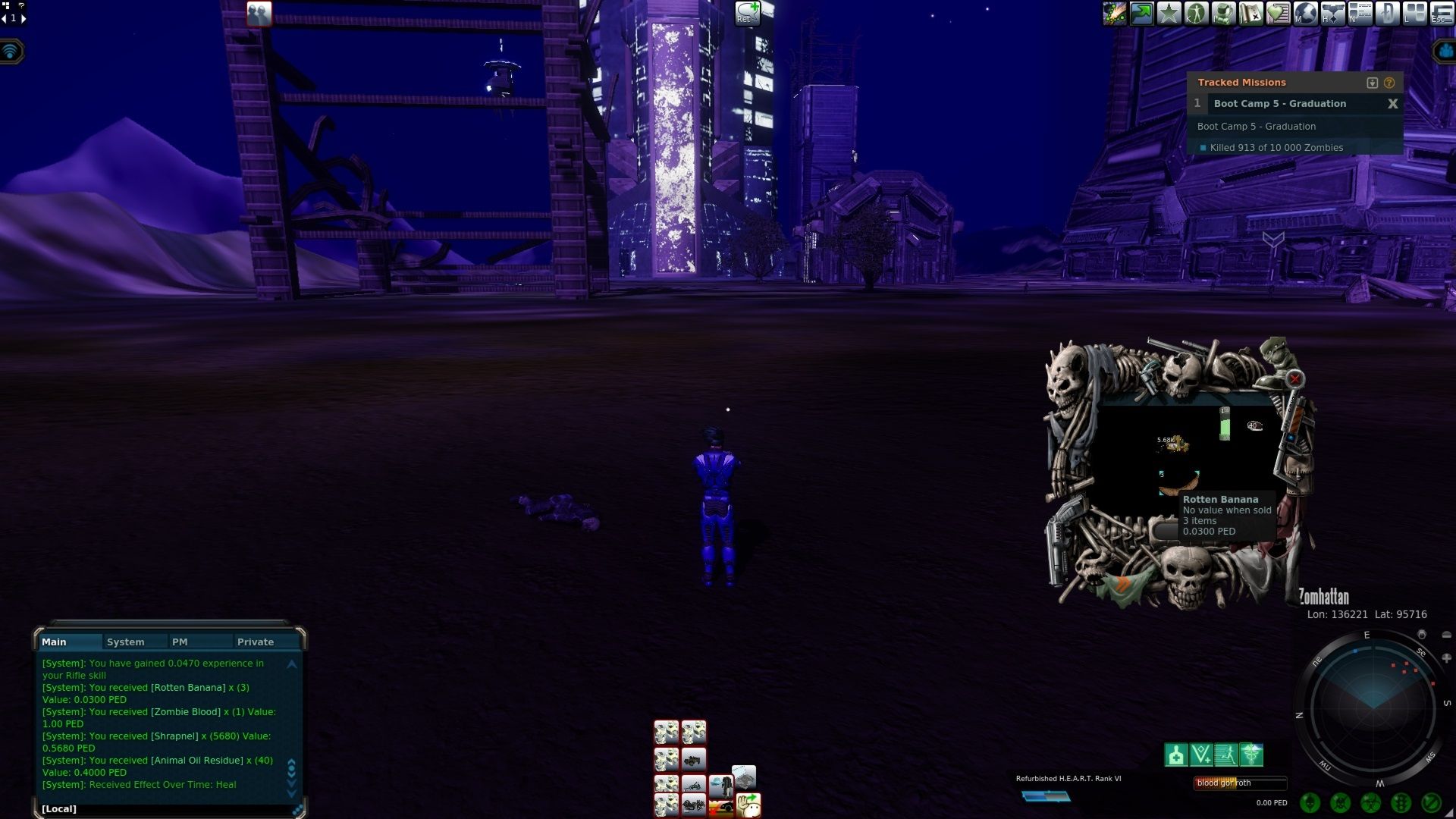 In my second 200 PED ammo hunt on Zombie Biker Outlaws, I switch to a different part of Zomhattan. This time around I ended up looting just Rotten Bananas. I got a total of 24 Rotten Bananas that run which is more than I’ll need for quite some time. Take note that right from where you zone in you can see a treehouse with an Installer Drake. At the top of that tree house is the Papapo Travel Agent who will send you back to Rocktropia for the cost of 1 CND Banana (377722, 19928). Here is the map of Secret Island after I got done exploring it. I have a few teleporters locations that I discovered that you can see on the map if you need help finding some. In club Neverdie you will find a mission to Hunt Things in the arctic at (37629, 19937). It is quite strange you would find a mission for that out here on Secret Island. I wish I had found this mission before I went on the several hunts I did on Things back on Rocktropia. Not that far away you will find the Island Girl Spa located at (37428, 19590). You can only use Mogwas for a temple location once every hour. He will give you the location of the water or forest or fire temple which requires a skull to enter. I’ll be going over a walkthrough for water and forest temples in future posts. Secret Island has some amazing views if you are one to go around exploring. I love how this place looks at nighttime. 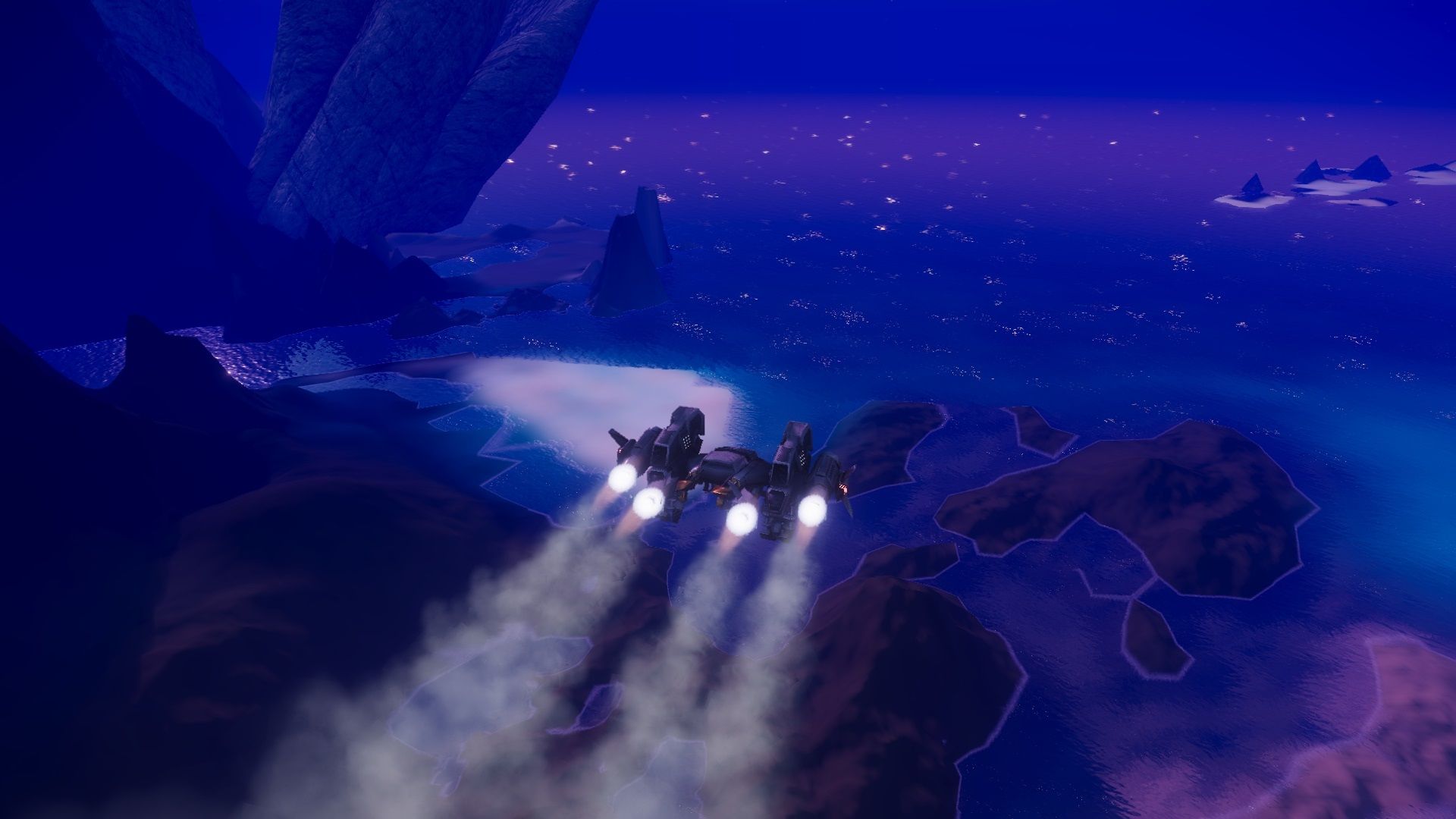 There are at least at the time of writing this a lot of areas that seem rather void of purpose. I did get quite the feeling that this place is unfinished. There is even this giant volcano with a lava pit. Some massive fights can be spawned on this island if you have all the required ingredients. This tends to be something that ubers run. If you are struggling to find some Gorillas to the farm from a CND banana there are some level 8’s at (38677,18051) which you should get a couple every few kills. I prefer the level 15 Gorillas that drop them far more often in a wave event just outside of the Mountain Gorilla Ridge teleport.

If all else fails you can try checking the Secret Island auction house for CND banana. You might be lucky and have someone selling individual CND bananas. However, expect to pay a high markup for them as people tend to list them for 1 to 3 PED each and they are low TT. This was quite an adventure I was not expecting to go on. This was originally going to be the last area I checked while I was on Rocktropia. This just goes to show you, that you never know where this game could end up taking you next and the sort of adventure you will find yourself in.

My secret island adventure does not stop here. Next up I’ll be farming for two of the skulls needed to enter some of the temples here. Who knows what else I might find?