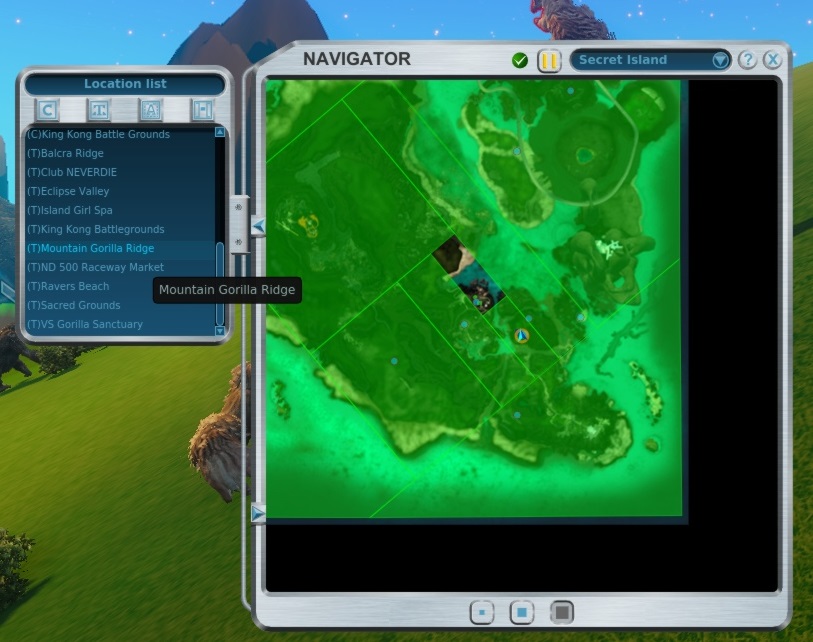 The creature on Secret Island that drops the Scared Forest Skull can be found in a wave event just outside of the Mountain Gorilla Ridge. Mountain Gorilla are level 15 and a bit harder to kill than the ones you needed for the water temple. The biggest thing you need to be careful of is when the wave event itself spawns. When you get to this location you will notice two or so Mountain Gorillas that are not shared loot just sitting about. Once you start killing them you will get a warning the wave event is about to start.

You will want to make sure you get a little distance from the area before the event starts. Otherwise, you risk getting aggression on quite a few of these gorillas and that can be enough to kill you in only Adjusted Pixie armor. On my second time triggering the wave event I ended up lucking out and looting the item you need a Scared Forest Skull which is consumed when entering the Forest Temple in Secret Island. It is only 5 PED base and has a much lower markup than the other skull. Like you did before for finding the water temple if you head over to Mogwa (37425, 19589) at the Island Girl Spa you can ask for the location of the Forest Temple and get a waypoint to it. While I could handle just one of the level 15 Pirate Ghosts inside just fine with Adjusted Pixie Armor. With the amount of healing I was doing I ended up switching over to my Gremlin armor set plated with 5B. That reduced the amount of damage I was taking by almost half.

I also spent around 164 PED in ammo using an Armatrix Lr-35 (L). They do appear to have slight regen. I ended up killing 43 Level 15 Pirate ghosts and 1 level 21 Forest Temple Guardian while inside.

While you do get around 2 hours and 13 minutes to clear the temple and finish. I found myself taking about 24 minutes. Quite a bit longer than the lower level temple run I did. These things had a fair amount more health. I rather enjoyed the overall green feeling and how much better the Forest temple is lit than the last temple I ran. It gave it quite a different overall vibe. 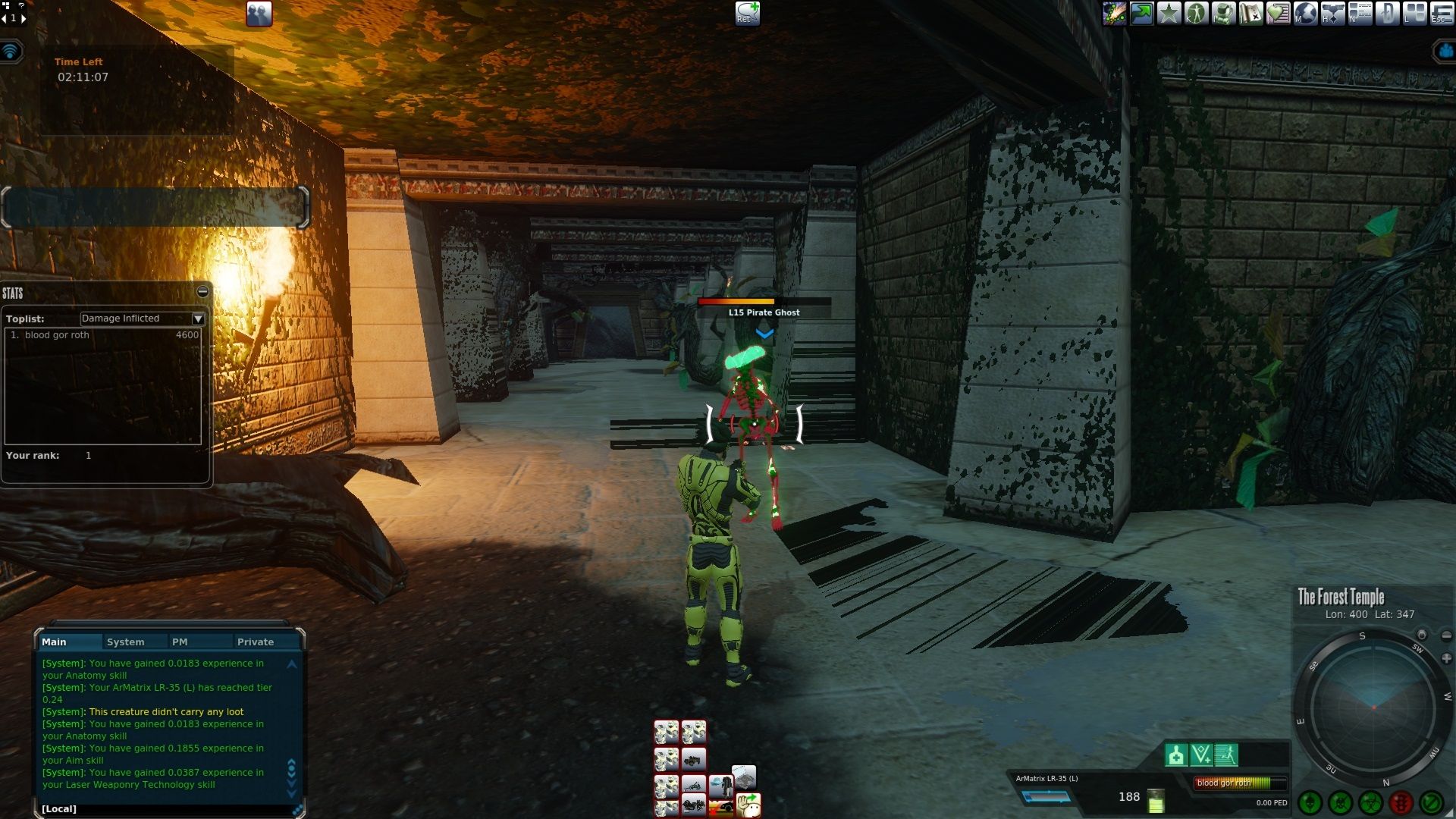 There will be a few long hallways to clear out as you make your way to the boss. Sometimes you luck out and can solo pull everything.

While I did try and do this run as long as I could with Adjusted Pixie armor. I was always having to stop and take a healing break. I even pulled out my T20 (L) at one point to do some emergency healing before I finally decided to switch to Gremlin which did a lot better job. 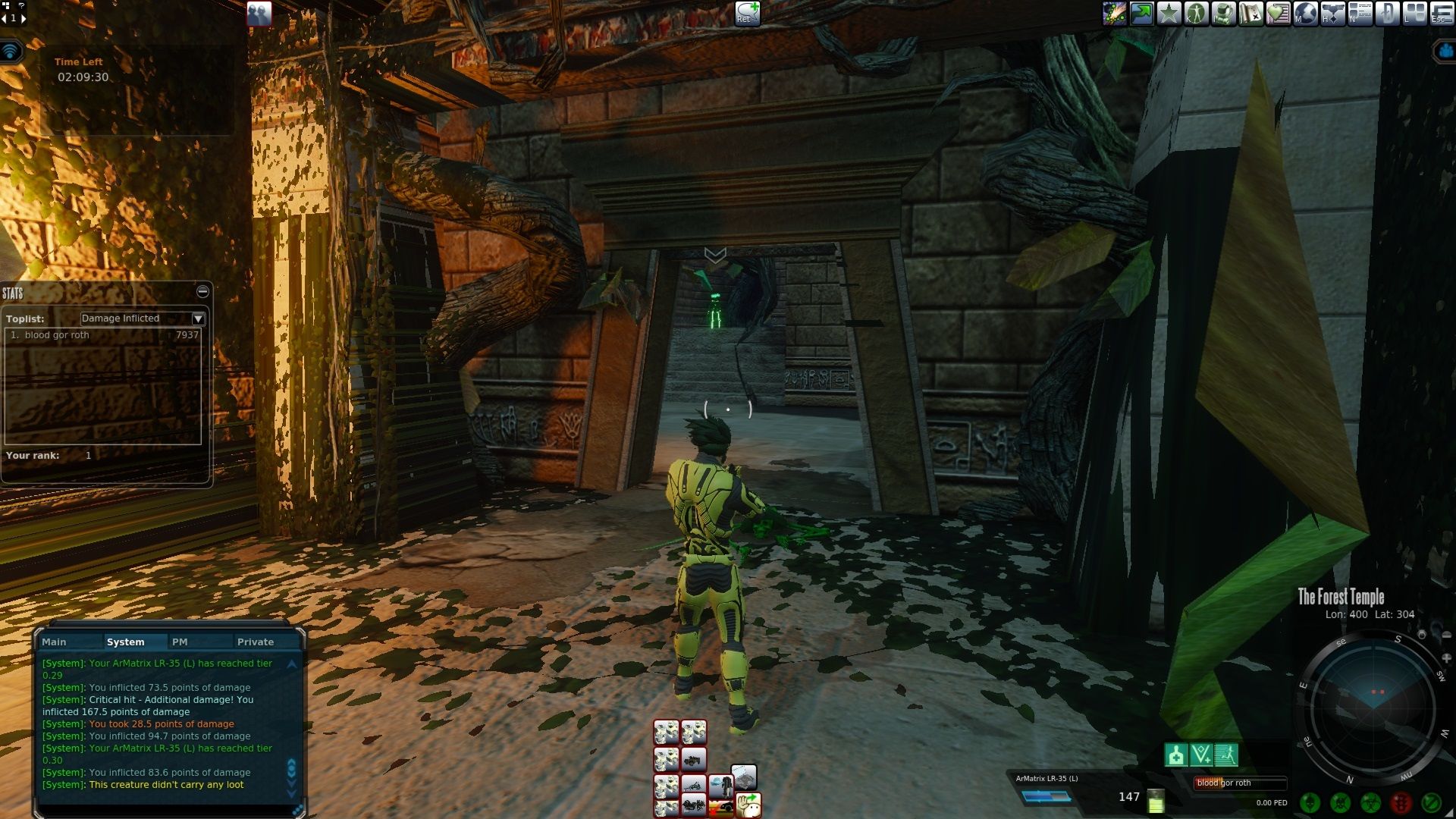 These pirates do move quickly and they love to go into corners. Making them somewhat annoying having to deal with. Thankfully a lot of the areas in this temple are quite narrow so there was only so far they could try and hide! After a fair bit of clearing, you will end up in this room. There will we wave respawn. Make sure to heal up on the last one before finishing it off. I was trying to use the choke point of the door as a funnel. While I could get them to take a step or two out into the hallways they could damage me through the wall. So that did not quite work out as I had hoped. 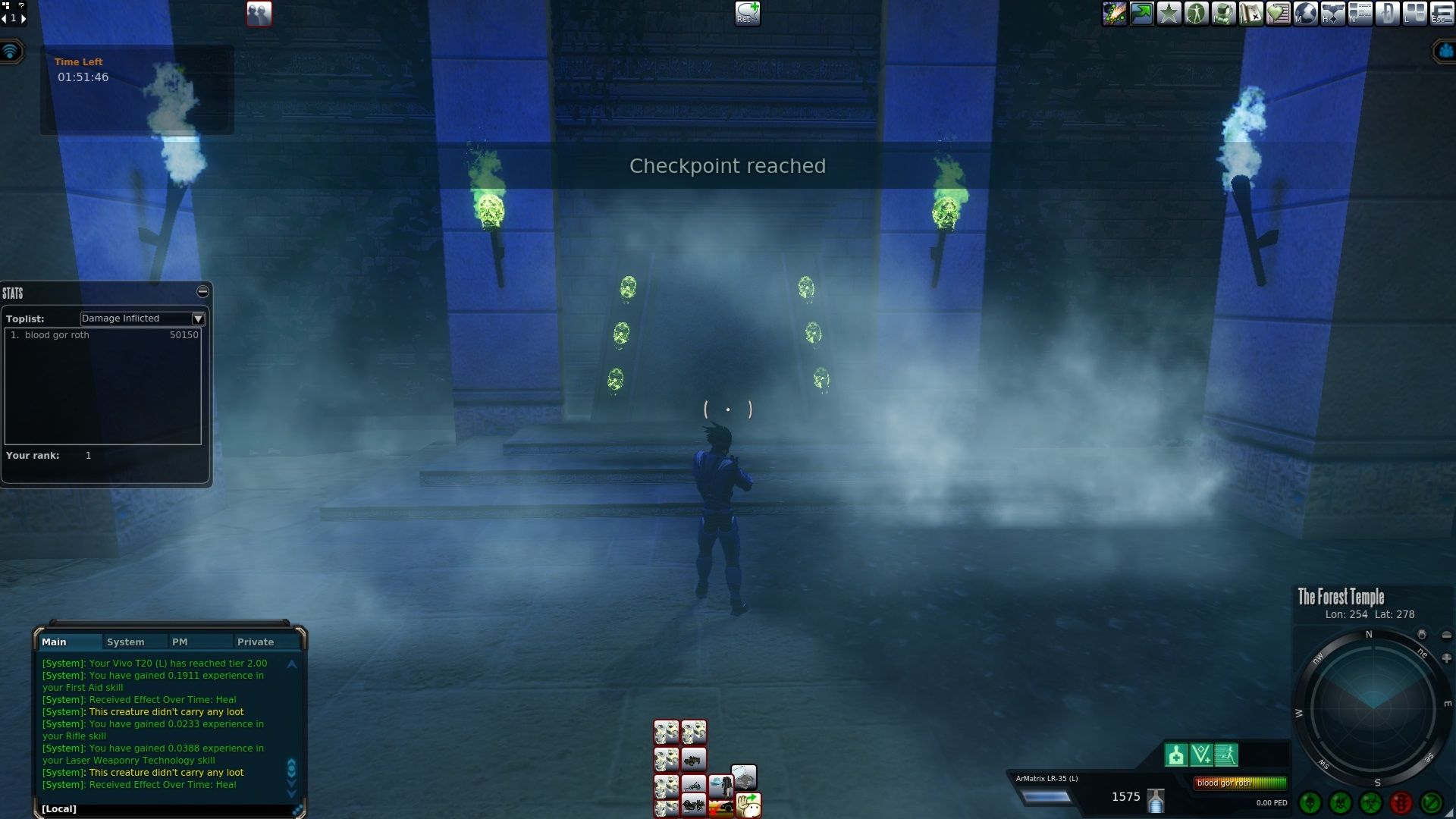 Once you make it to this door you know the boss room is next. 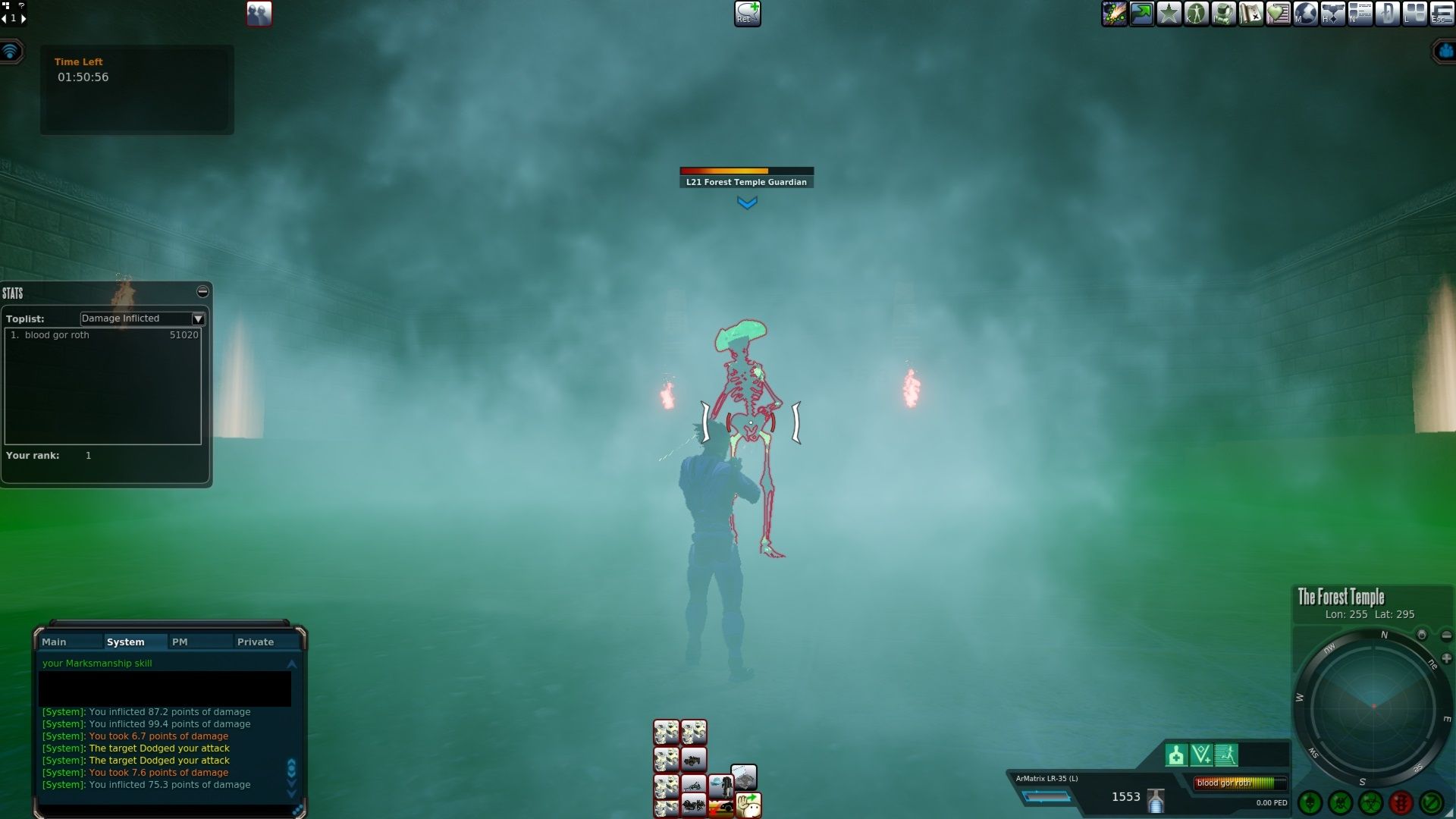 The boss is a level 21 Forest Temple Guardian. As you can see with Gremlin armor with 5B plating I was only taking 6-7 damage most of the time. While it took a little while to kill I never needed to do any healing and an Armatrix Lr-35 (L) was more than enough to get the job done. 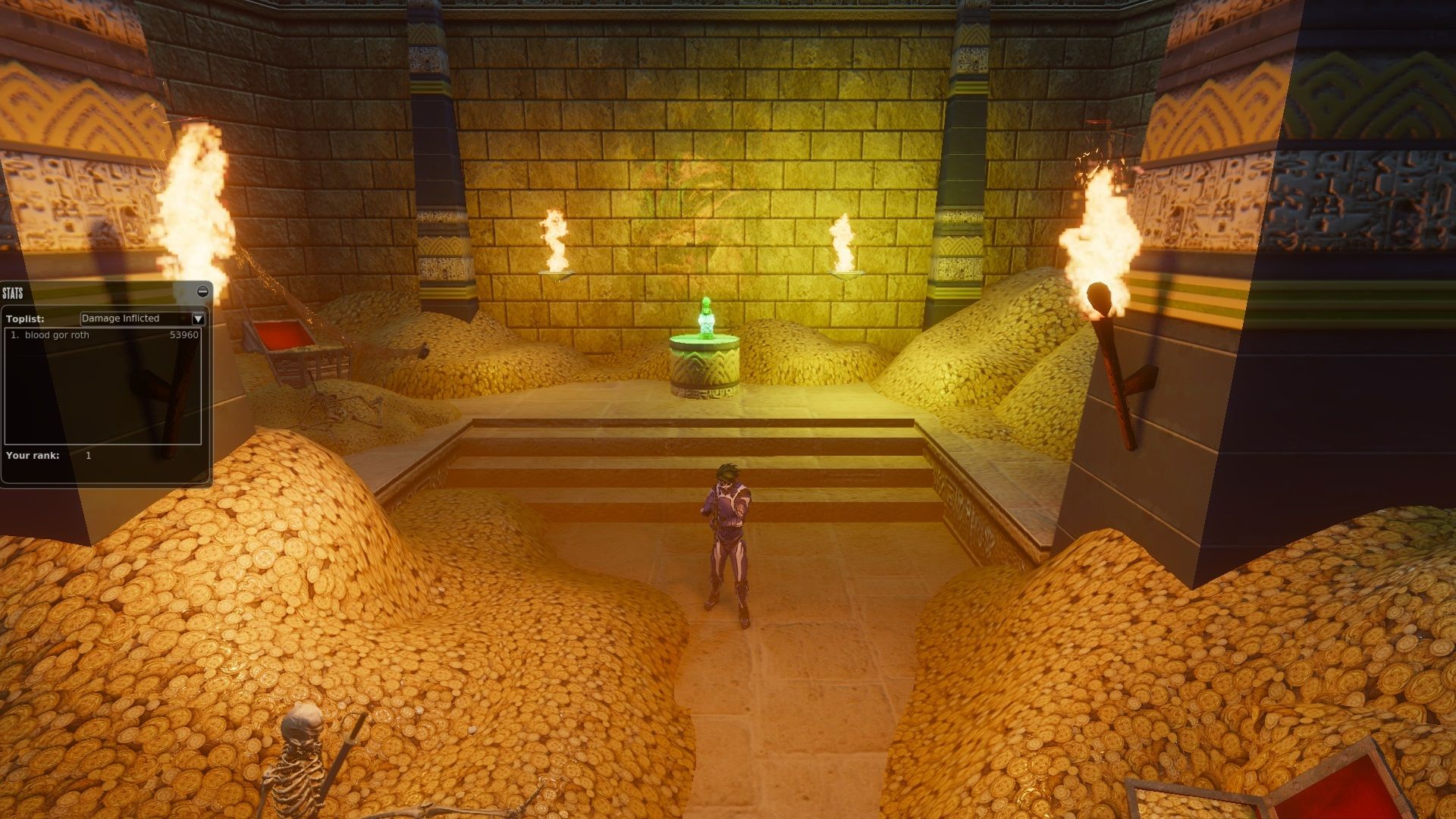 After that, you have the treasure room. Clicking on the green forest statue in the back ends the instance and rewards the loot. Another temple runs that I got hosed on for the loot. No statue or other strange ingredients just 3 petty Pirate Doubloon, shrapnel, and eye oil. I ended up getting 142 PED in loot and I spent around 164 PED in ammo, 2.47 armor decay, 3.25 healing decay, 5 PED tt key, and my weapon and amp decay.

It is tempting to run one of these temples that I have done again just to see if there is anything else I might luck out in loot. However, the biggest cost is trying to get the key for them. They also have not been looting that great for me to want to go back.

While there is a third instance on this island called Fire temple. It would be just too hard for my level of damage and gear to take on at this time. Perhaps one day I’ll return to Secret Island and try to get some revenge while taking a look at that one.