Back in the day, I use to run a few Arkadia instances along with buying a lot of the Arkoin that you can spend at a vendor. Since then it seems quite a few things have changed. Some for the better and some for the worse. I thought I would dive right in and check out a couple of them.

Back then if I recall you were able to enter them solo or perhaps I had someone who joined my group so I could drop them afterward I got in. All I do know is if you run this with a group you need the normal Arkadian Key with it repaired to full.

The best thing in my opinion about the group instance runs is all the loot is at the end in a chest. You loot it, you get some nice swirls depending on what level you ran. It was a fun time.

If you are going in solo like I am these days you need to loot every single creature. That to me seems not as fun. You also need to go out and get an Arkadian Mini Key and the level for the one you are running.

As far as getting to the instance rooms themselves you travel to Aakas and then enter the chamber where an opened snake mouth is the entrance of the cave. You then follow it back till you get into the center room. As far as getting the key itself. You will find some players selling them at the auction house. These are crafted items you however need to have the blueprint to do so. If only normal Aakas keys are up for sale you can fully repair them and turn them into the NPC next to Marianna Lehr. That person then will had you the value of the key in universe ammo plus a mini key of the same tier you gave them. There are also some missions you can pick up from the ACA representative. They are all killing missions for creatures that can be found within the instance. When you finish one mission it is important to agree to get the next mission from the popup window. Otherwise, it seems to mess it up for you which is something I learned the hard way. 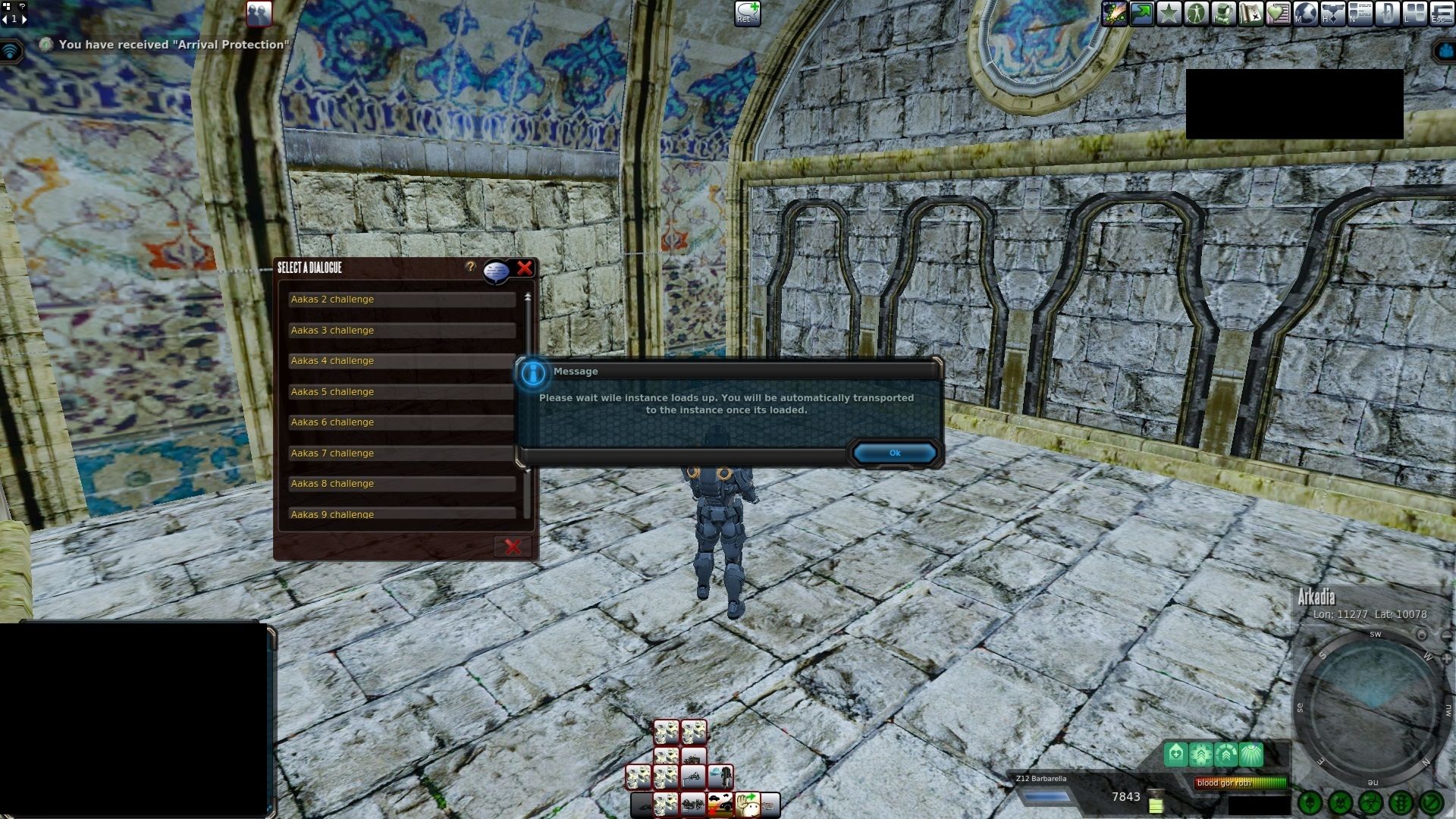 Once you start the instance it will put you into this strange in-between room. They load up the instance. I can only guess this is a way to keep people from wondering if it worked or not. Along with them not trying to run off.

Once inside the instance, you have two hours to finish it. I found it took me 45 minutes the first time around and about 35 minutes for all my other runs at Aakas 01.

If you need to repair or buy ammo you can do so at the start of the instance. There will also be a couple of points along the way to do so again if needed. You will also find there is an excuses amount of revival points in this instance. Aakas instance has quite a few levels to it. You slowly work your way down to the bottom where you enter one final room for a boss battle and the exit.

Along the way, there is a lot of killing. I ended up killing 178 creatures and using 24-25 PED of ammo each run for the Mini 01 instance.

Outside of the boss and mini-boss in this instance, I could have killed everything else quite easily with just a Z12 Barbarella and whatever basic gear you have. Things like this Rakta are quite easy to kill. 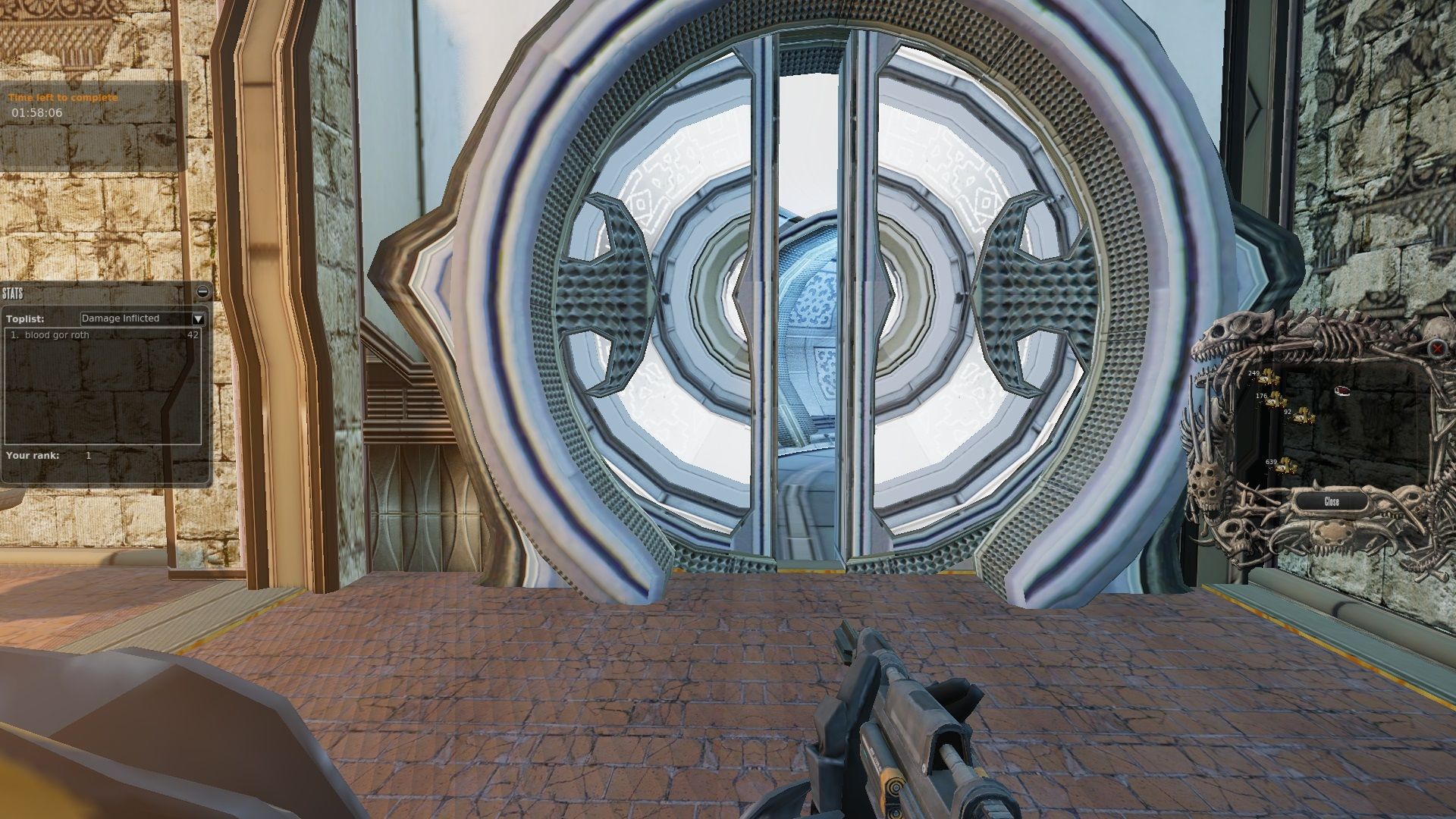 Aakas instances have some very strange structures from within the side. You could have mistaken this doorway and walkway to be in some kind of futuristic space station or underground tunnel. Once you start speed running these you will realize you don’t have to wait for the door to fully open to just run past it saving you a few minutes each run. Each floor is separated by one of these portals that takes you to the next floor. Be careful to not double-click them otherwise it will just send you back to the same one. It can be easy to get turned around in how massive this instance is if you are not paying close attention and this is one of those spots that can do you in.

At the lower levels, I never felt a need to carefully walk into each of the rooms in the instance. However, once you start doing harder ones than Aakas 01 you might want to start to think more tactfully about the situation you are in. Rooms like this one typically have quite spread-out creatures. They are also on the easier side to deal with. You might have some Yarrijak cricket-looking things along the outer sides of things. With possible Rakta snakes on tables depending on the room. 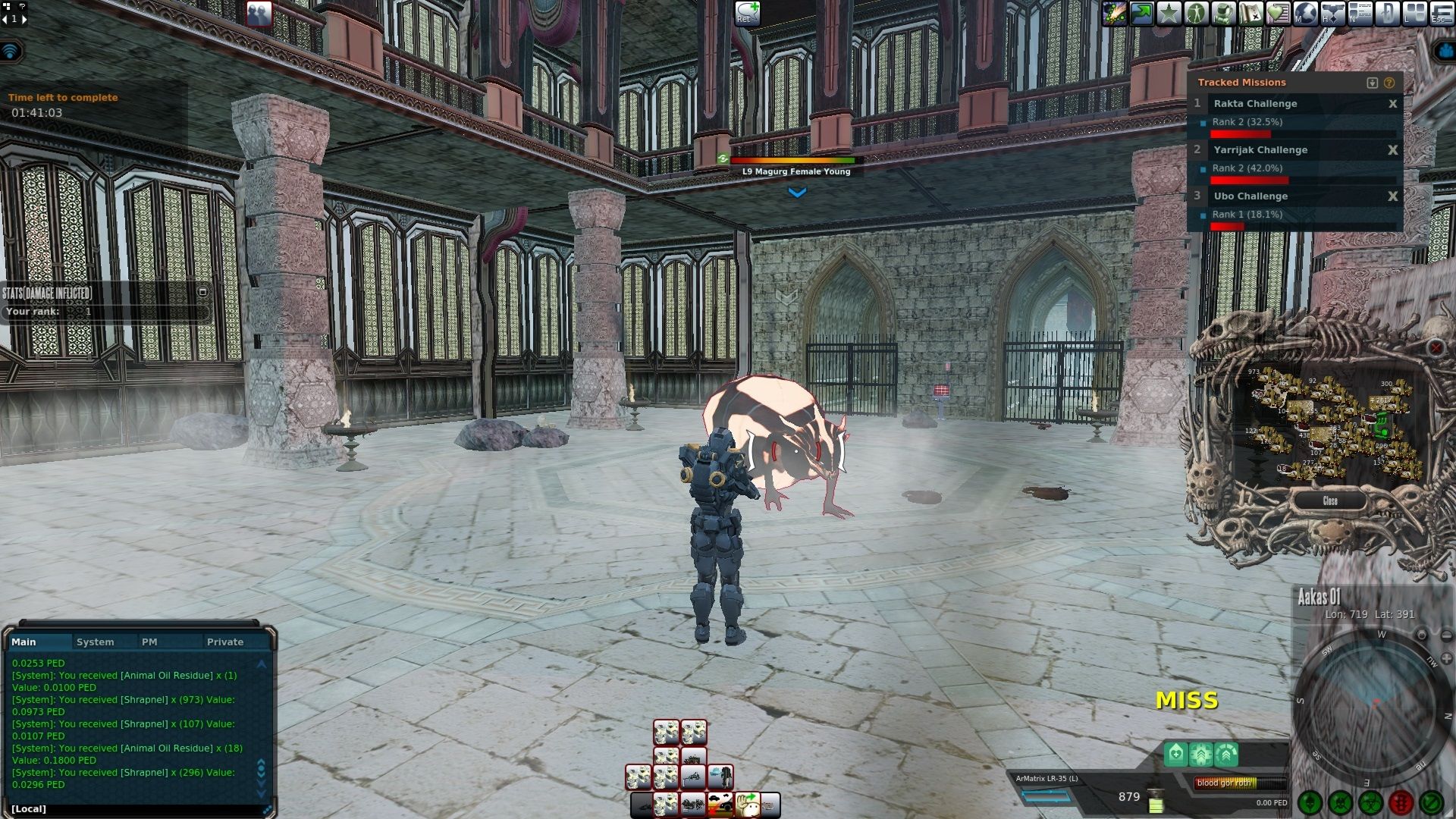 Halfway through the instance, you will run into a mini-boss. This was one of the only two times I pulled out a bigger gun such as an Armatrix-LR 35 (L). As this thing has 970 health and I’m not taking that down with just a lower-level starting gun. 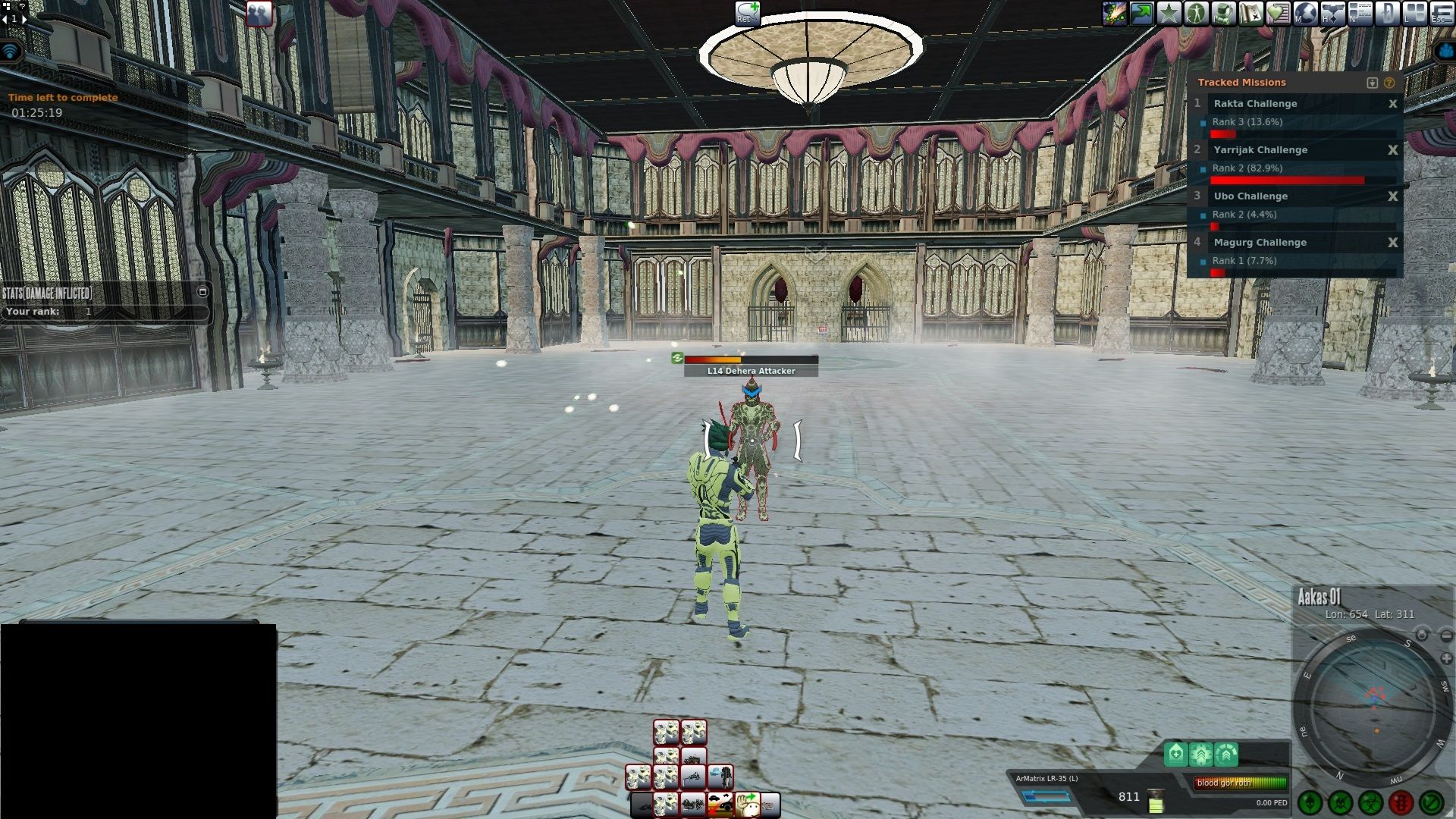 At the end of the instance, you will run into a boss. For the Aakas 01 instance, it was a Dehera Attacker which has 1.5k health. I was fine taking it on with just Adjusted Pixel with 2A plating and Armatrix-LR 35 (L). 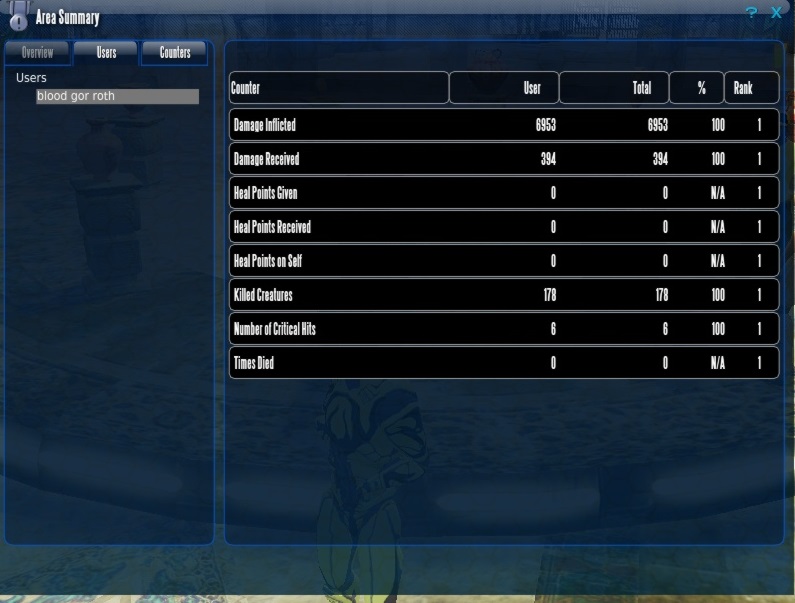 After that, the next room contains the exit to the insane. If you are running this as a group make sure to loot the chests in the next room as that is your loot. In the solo since you are looting as you go there are no chests of fun to loot—sad face.

One of the reasons that use to be for running these was for Arkoin. Nowadays they are sadly near worthless but people still buy them for around 105% markup. Even that decade price of 114% sounds quite low back from when I use to buy them off instance runs. 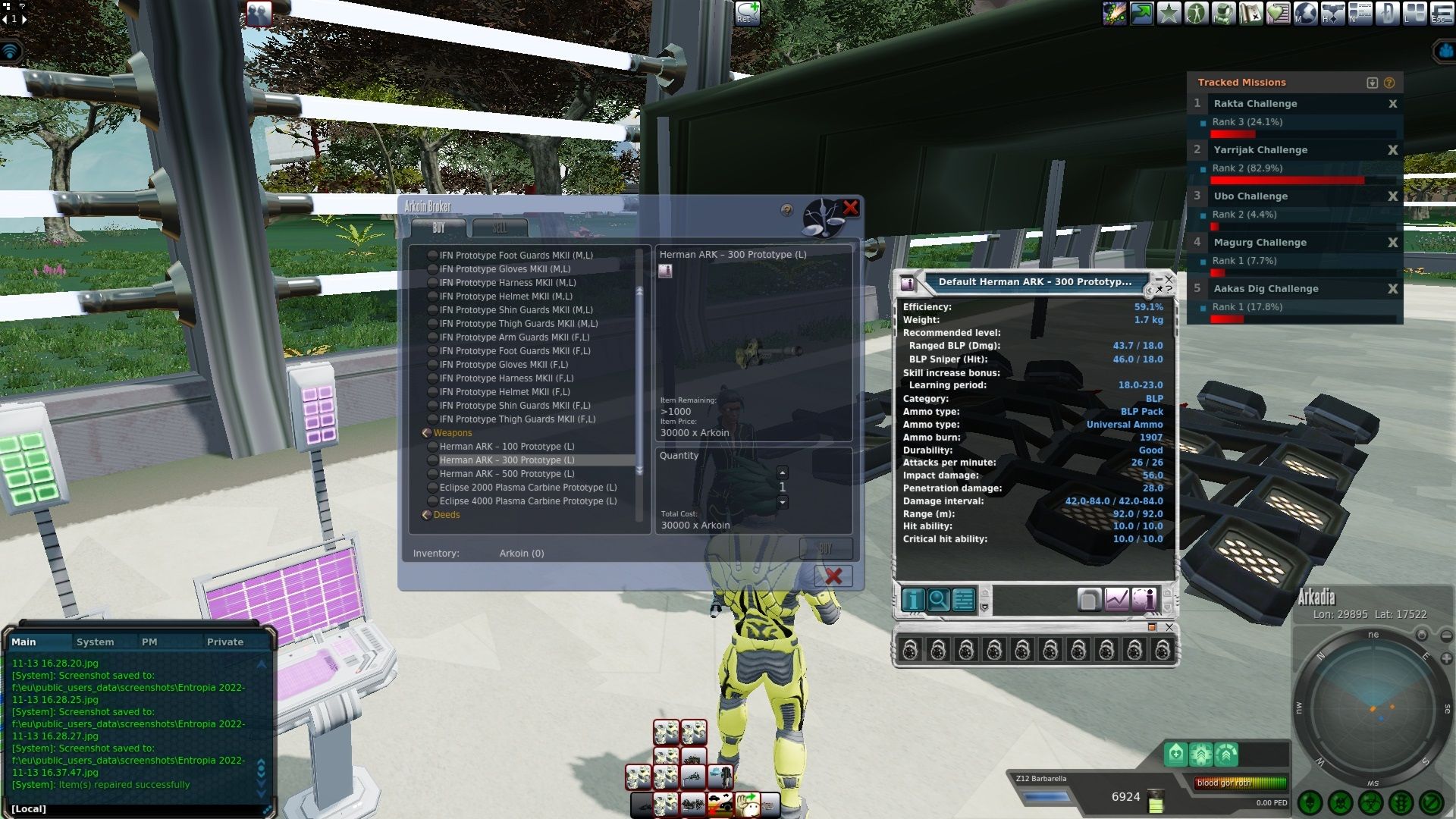 Sadly it appears his wares have been heavily nerfed. Back in the day, you could buy Perseus (L) armor. Over time the crafters ended up looting many blueprints to craft it and it appears it was fully removed from the vendor. As crafters were quite unhappy hunters could just farm coins or buy them from each other to get the armor.

I use to back in the day run these instance and buy the coins off runners. Go over to the vendor and buy Perseus (L) armor. I then would fly it over to planet Calypso and put it up for sale for huge markup and returns.

Many players even those running the instance did not seem to understand or perhaps they just did not care. For quite a while I was an armor dealer in Entropia Universe and it paid quite well. However, like all good things it came to end when far too many people caught onto this and got Arkoin because quite competitive to get at a cheap enough price. Sadly nowadays this is what the vendor has been reduced to. Some armor I guess is for running the instance. While it has some high durability you will notice no one has bought any of this IFN prototype armor in quite some time. There is also not a lot of markup between the current price of the coin and the decade price.

There are also some Herman (L) guns on the vender. These are not a good deal at all and no one is buying them. The biggest ticket item off the vendor was their limited land area claims. They required an insane amount of Arkoin and many uber players ground these instances like crazy people for a chance to be a land owner if they bought the single quantity that was on the vendor for each of the land claims.

There are also some clothing items but the markup on them is quite dreadful. They also look UGLY! 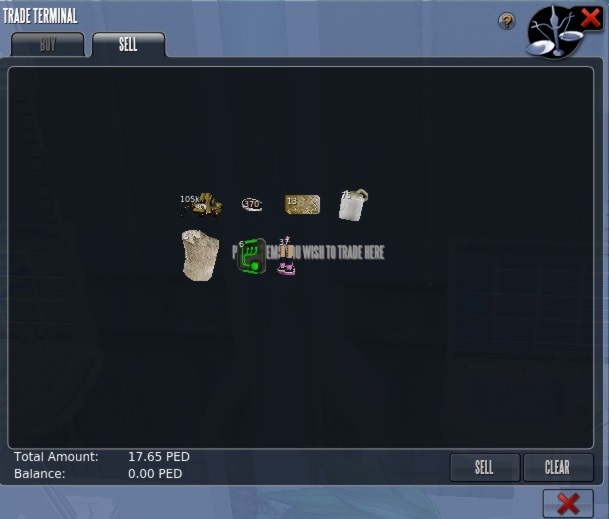 It was fun to go down memory lane a bit and check back in on this kind of instance. I can recall so many ubers back in the day used to run the golden instance of these. I have yet to see a single golden cog drop which makes me wonder if that is a group-only loot.

As you can tell the loot returns are not that great. With how little the Arkoin are worth these days and not a great item to pick from the vendor either. Running these instance just for the Arkoin appear to not be a smart move anymore these days. There are however other things to acquire for doing so.

Up next I’ll be going over a more in-depth run in an Aakas 04 instance. Where it is a bit more challenging and even possibly more rewarding if you get lucky on loot.