In the second part of my trip to Monria, I wanted to explore all the domes and the cave network on the moon itself. While there are not a lot of different creatures to hunt here there are some. Along with a reason why some will grind on this moon for weeks or even longer.

If you have not read about the first part of my trip make sure to catch up first. I go over traveling to the moon. Along with crafting and mining. Including the reason why a lot of starting crafters might also want to make the trip.

There are some things I feel Monria does well and other things that I must warn you to be careful about. You will notice many times the icon on the mini radar for vehicles is red meaning you can’t use them in that area. This means you need to be careful to not end up in a situation you cannot get out of easily.

Unlike hunting on a space station like Crystal Palace or mining on the F.O.M.A. asteroid where if you die you end up in the main area with access to a teleport. That is often not the case with Monria. If you die you tend to end up at a revival point with a single gun turret protecting a small area and nothing else.

Many of the creatures here have a decently low aggression range which is a good thing. You can however end up reviving at some nasty locations with creatures you lack the guns or gear to deal with. Not to mention if you run out of ammunition your only choice might be to train to hope to get within range of a more favorable revival point that you can get out. 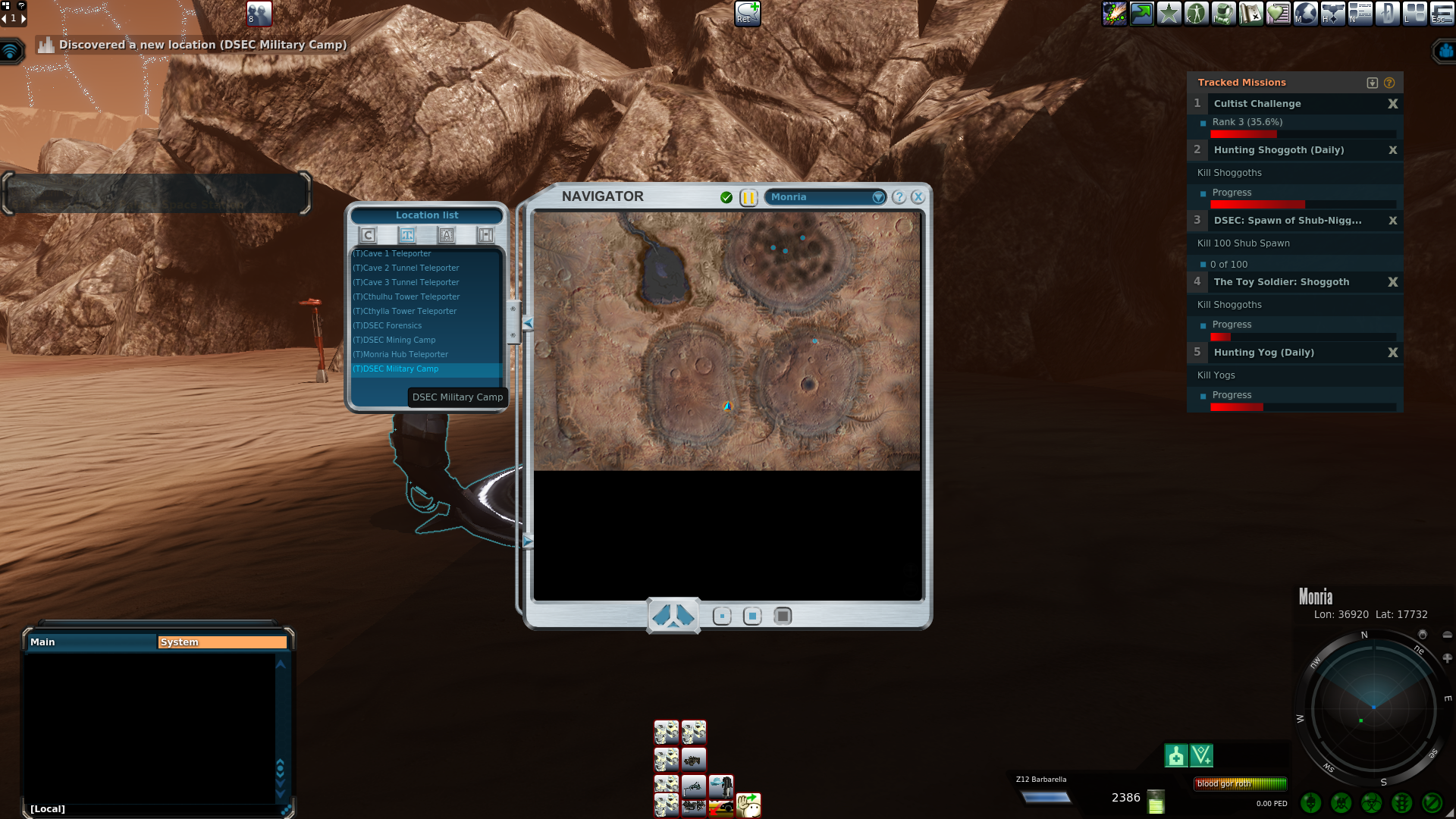 What Monria does well are the domes. While you only have the teleport unlocked for the first one DSEC Forensics. There are two other one DSEC Mining Camp and DSEC Military Camp. Each one gets progressively harder and you need to find the cave entrance to a teleport in each dome to move forward to the next. 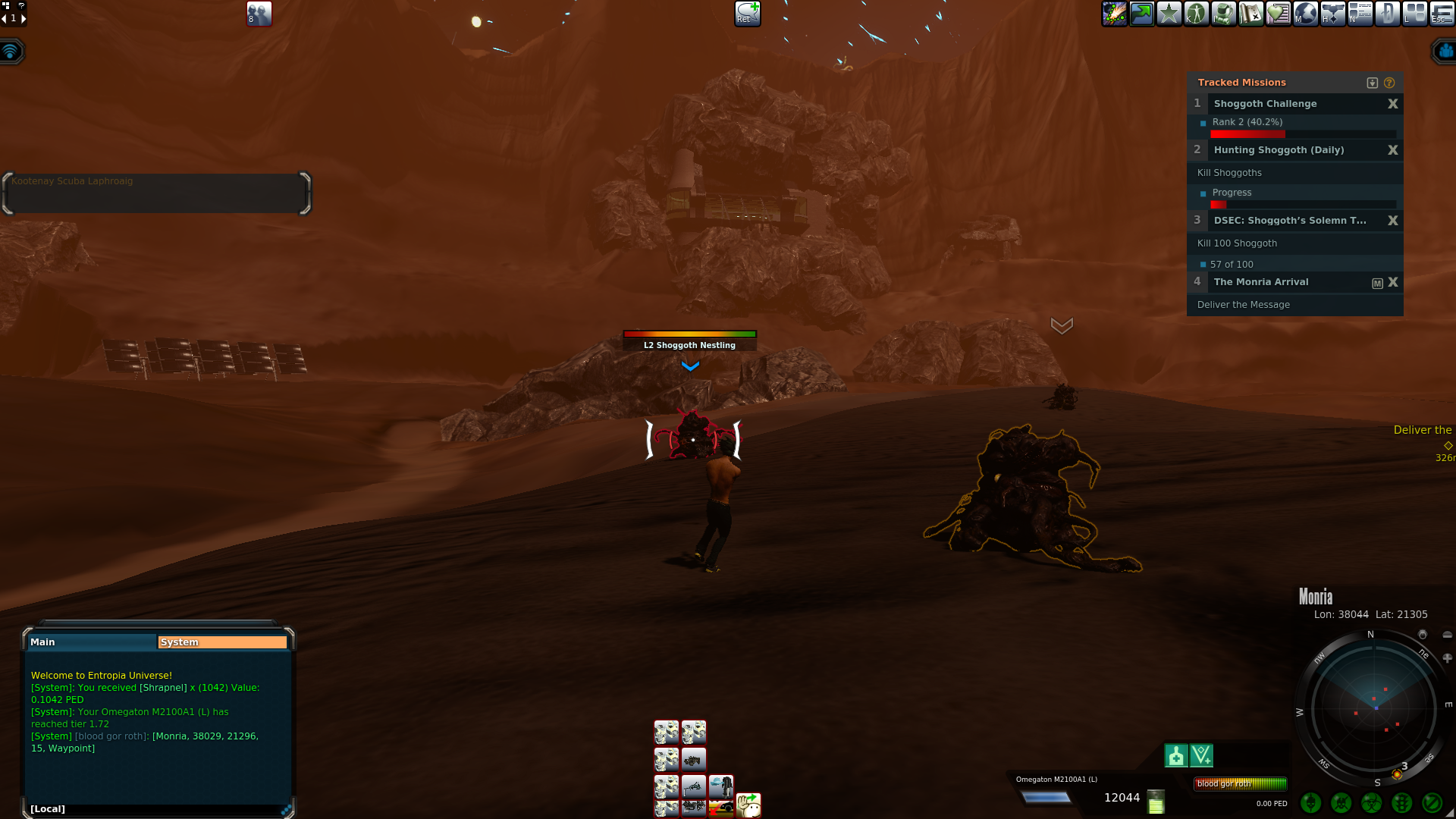 The first dome DSEC Forensics is filled with mostly Shoggoth. These are very new and player-friendly. Although you do need to be careful not to get many of them on you at once. Like many creatures on Monria, there is a starting mission, a daily, and a codex for them.

The standard gun I usually use for hunting low-level creatures was over-killing them. So I ended up pulling out a trade terminal l pistol I had an Omegaton M2100A1 (L). It was more than enough to make quick work of them.

While there are higher maturity Shoggoth’s in the cave. I do not recommend a new player to go down there. As a death in the wrong area can leave you at a harsh revival spot deeper into the caves. Instead, sticking with the domes for the most part is the way to go. There are some amazing views in these domes. I would love to explore further a rocky planet like this. I have yet to be everywhere in Entropia Universe and I can only assume there are still some breathtaking areas I’ve yet to see. To get into the next domes you need to find a cave-like-looking entrance that has a teleporter in front of it. You will know you are in the general area of it as it is guarded by the creatures that are prominent in the next dome.

The next dome has a teleport to it for DSEC Mining Camp. It seems to be where you would think many would go mining. I had zero luck in there after dropping 20-30 or so probes. While this is indoor mining and it’s harder to find a claim. If I’m having that kind of luck I’m a bit turned off. 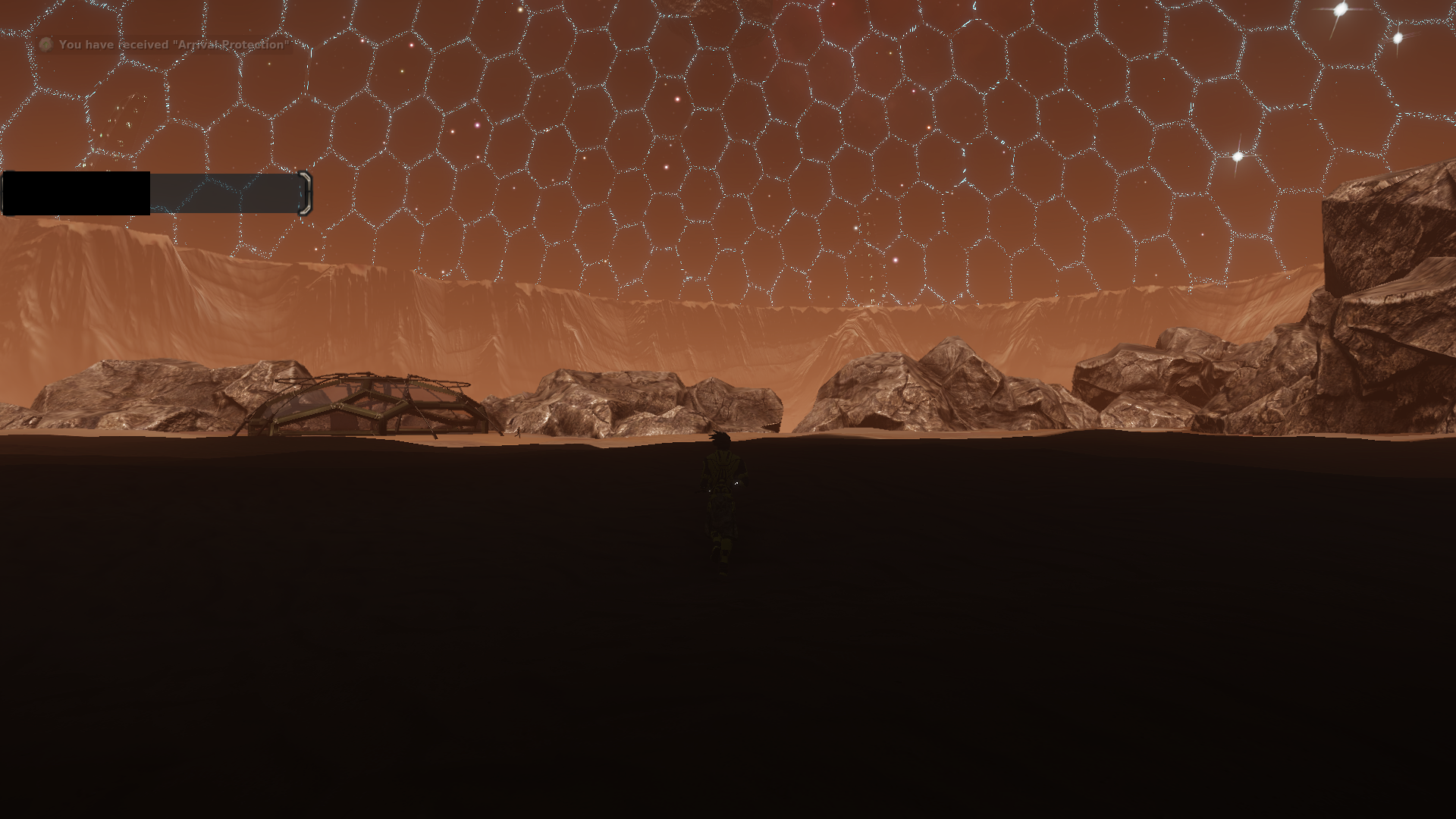 The final dome is DSEC Military Camp. You will find things like Cultist in there. Cultists can have many hundreds or thousands of health and that is when you need to start paying attention to what you are engaging in combat.

I ended up grinding out some codex levels and the starting mission for Shoggoth, Yog, and Cultist. The daily missions require a lot of kills and I never focused on a single creature long enough for my trip to see the kind of rewards they offer.

Many of the starting missions for hunting different creatures gave a small amount of universal ammo such as 0.100 PED. Getting a little something extra for something you already were going to do is just a bonus.

For the most part, these domes are rather “safe” places for hunting. If you end up getting killed you can usually get to a teleporter without too much of an issue. These domes however are more geared towards newer players. 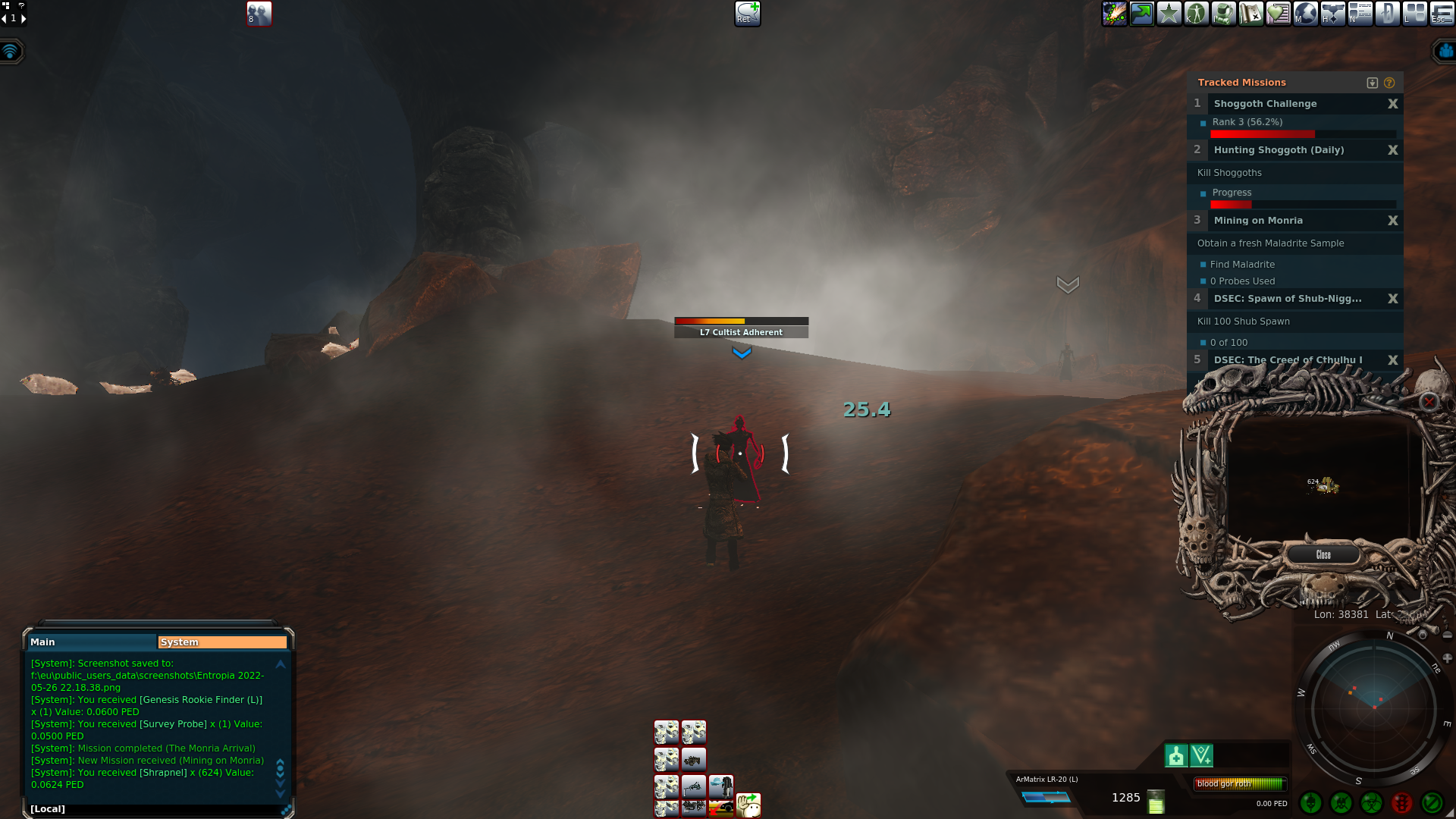 I wanted some more interesting situations. A couple of the starting missions will even tempt you to go down into the fast cave system on Monria. The first one or two areas are not that bad. You tend to run into slightly higher maturity of what you would be hunting in the different domes.

As someone who loves dungeons in video games, I felt at home in the cave system. They were quite fun to explore for the parts that I could clear and get into. They also provided a much higher level of things to hunt which meant bigger progression per kill for the different codex. 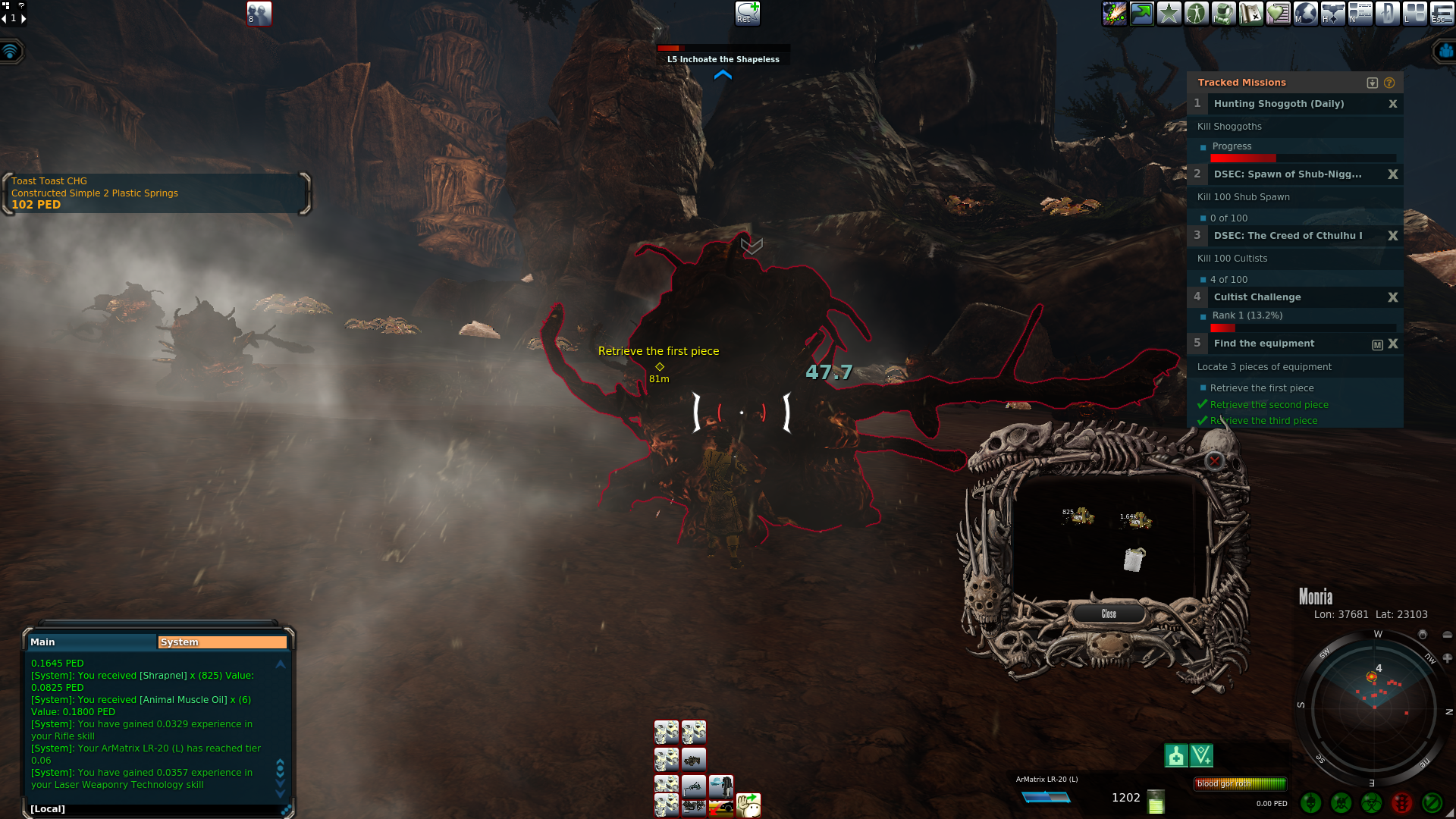 I even found myself in some interesting situations. There was so many Shoggoth of higher maturity blocking my path forward to a mission point I was running to. I decided to just charge towards it after failing to clear fast enough. I then took my gear off and got killed since I had too many of them on me at once. In an attempt to avoid taking lots of unwanted gear decay in the process!

This ended up making things even more fun. The revival point for this area was even deeper into the cave than I had been at that point. Thankfully it was nothing I could not take on. I did not even need to put on anything bigger than my Adjusted Pixie that has some plates in them. I ended up putting my plated Gremlin gear to get myself out of that location. I crawled along the walls and slowly moved forward trying to avoid unwanted aggressions when I could. While the gear was not perfect it was enough to keep me from getting killed l I was a bit cornered about running out of ammo.

I also decided to not venture on this trip any deeper into the cave system. The creatures get higher and higher levels there. I’d hate to get stuck. While it was a fun little trip out there. I was not set up to be here for the long haul to be here. Many large players come to Monria to work on a mission called The Order of the Elder Gods that rewards a 3% increased reload speed helm piece named The Horns of Z’agol.

The mission requires you to collect chapter pages that are suspected rare drops from Shoggoth, Yog, Cultists, and one creature I never hunted called Shub. These I’ve been told can take quite a very long time to get for many players.

While having some reload speed would be awesome. The issue with the horns is they take up the helm armor slot. They have added the ability to attach the horns to a couple of helms. I don’t have any of those helms and that is a lot of work. It’s a shame it’s not an “accessory slot” or just a basic attachment as it would have been cool to work on having them and still wear whatever helm I want. They are however not like rings or weapon attachments and don’t work in that way. 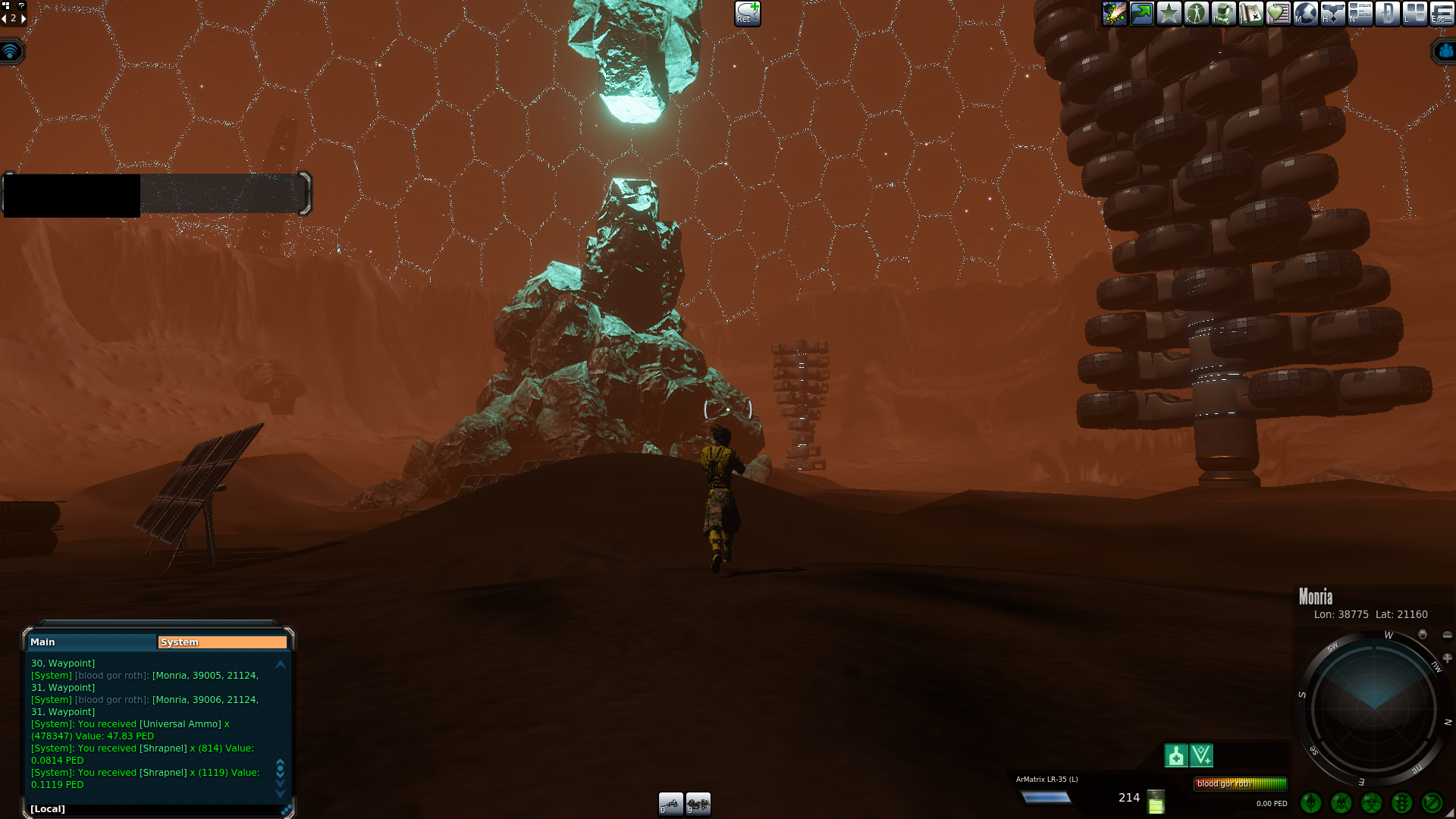 The final part of my journey was working out how I was getting home. I could either fly back to Calypso, wait till the next free scheduled ship trip was, or pay to teleport back to Calypso.

While I did not look at the market there to see if there was enough volume to try and sell things. The matter is I was not there for weeks and the amount of stuff I had was not a lot. I also did not want to have to come back here a week later to deal with any unsold items.

For me to take either of the first two options t I would have to just vender all my loot for the trade terminal value and not make any markup off it. That is never an ideal situation but I would rather do that than risk getting looted by pirates and have them make a bunch of money off me. I also was not looking to lose $50+ or so in loot I had.

The better option would be to pay to teleport back to Calypso. This is great that you can do so from here. Since I was not born on this moon and do not have access to unlock free teleporting it would cost me 7 PED to do so.

That is quite the deal if I had enough in markup on the items I looted. After doing some quick math and working out the costs to fly back myself anyways. My best choice was to pay the 7 PED fee and teleport back to Calypso.

Everything I looted during this trip then was put into my storage. Where it would wait till I have large enough stack sizes of the different items to list them up for sale in the auction house. That could be days later or months depending on the item.