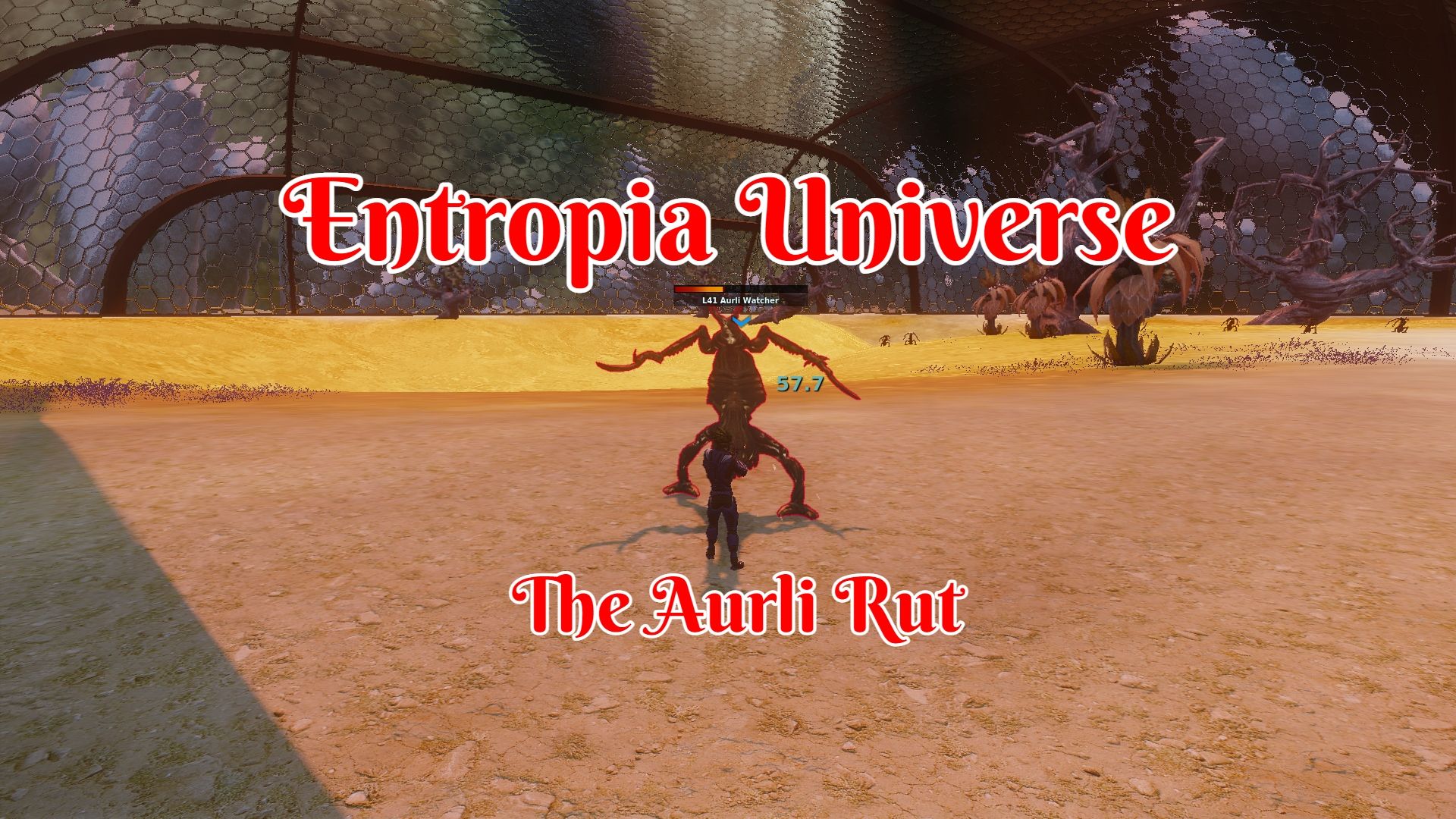 The good times had to end at some point and things certainly have come crashing down. My last two hunts on Aurli have been amazing. I seem to have hit quite a losing streak with my next several hunts ending badly.

Being in a rut in Entropia Universe can suck. You never know if it’s just the beginning or if things are going to change the next time you go out and do something. All I do know is every time I go out hunting Aurli everyone else is getting global and stack of loot. I on the other hand come back with mostly empty pockets.

I expect with the way the first two hunts went that something like an Aurli can have a bit of a swing in loot. That is why I came up here planning to be here for a bit and expecting there to be quite some lows. I’m by no means cornered even remotely as of yet.

It would have just been nice if I could have a bit more action along the way. I still have quite a lot to learn about how often I can expect to get certain types of loots that are listed as common and uncommon. I still have stuff I’ve only seen once so far or not at all. It will be interesting to see over the long run what I end up getting.

The good news is I have died a lot less than I was expecting to. With how often I see people at the revive station knowing full well they were just hunting moments ago. I was expecting to get killed a lot more often than I have been.

I’m at least now getting quite a good understanding of when I need to break out my bigger heals for in-combat healing and when I can heal after combat saving myself some costs. This also means the creatures are regening less health since I’m not healing unnecessarily.

There have been a couple of sketchy moments where I have been down to just a sliver of life. I however thankfully healed quickly enough to stabilize and not get killed. In those situations, a back-to-back critical hit for sure would have done me in.

On my very next hunt out it ended up being a rough one. A player had cleared the side I ended up taking in the dome. Things were respawning in a way I did not think anyone had recently been there as I was just out of range for a while to see they had been cleared and were starting to respawn. It did not take me too long to get caught up and in a situation of getting respawns on me over and over again. I ended up holding up quite better than I was expecting when I was attacking a level 44 Aurli solider and I ended up getting an Aurli Weak respawning right on me. Just the soldier alone was already going to take some time and require me to play it safe when it came to healing.

Having a respawn join into the remixed chewed up my armor quite well. This happened a couple more times before I ended up getting respawns in a cycle I understood and could mostly avoid such situations from happening again to me.

The damage was however already done. I ended up taking 33% higher armor decay than the amounts I have recorded up till this point for a normal hunt on Aurli. In my limited healing device on the other hand I used double the decay to heal through all that extra damage I was taking.

These things happen. Next time if things start to appear slightly suspect I might just go wait at the teleport next to the defense turret for a few moments to make sure I’m not ending up in such a situation again.

Granted with how small this dome is it’s just going to be the course things will take some time. I still have not hunted enough here yet to learn how to spot many different undesirable situations and how to avoid them. I did however manage to finish off my second rank of the Aurli Codex during this hunt. I picked myself up a cool 1.91 PED of Athletics. If I had to buy off the auction house from another player funny enough would cost just .01 less than what I ended up losing this hunt.

While not exactly what I had in mind as far as returns. These codex rewards are worth a little something from time to time. While I won’t be finishing one every hunt they are in part the reason why I’m up here in the first place hunting Aurli.

That was however the most exciting thing that happened during the entire run. At least I was getting a couple of 10 PED here or there loots. However just killing one of these costs 6 PED worth of ammo and then you have decay on weapons, healing devices, and armor to take into consideration. I still however got off easy on that hunt. The next one I went off on was a total dumpster fire of a wreck. The other person that I’m aware of that was hunting Aurli was getting quite a few decent global. I was hoping they were popping off and I’d get in on that action.

Instead, I did not even find anything that had a higher markup than 101.6%. I also was down 45.71% on that hunt. Making it my worst hunt since I’ve come back even worse than some of the runs I had on Rextelum and those dreadful Easter Mayhem 2022 event I took part in that I got wrecked in. The run after that I at least got something I have yet to loot. Not sure if I want an Aurli Shock Flesh or not but at 132% weekly markup why not. It’s a shame however two pieces of the stuff only have a base value of 1.56 PED. I’ll be needing quite a few more of them to drop before I can sell any on auction.

I don’t know what this stuff even is for and frankly, I don’t want to know. For all I know they grind it up and snort the stuff. It however has 132% markup which for me is a no question asked what you do with your Aurli Shock Flesh is your own business.

At least that run was only a 33% loss. One of my better Aurli runs more than can make up for a reasonable loss like that. There was also a tiny bit of markup to help soften the blow. It was at least better than nothing. It also ended a dreadful couple of days. At least I can end on a positive note I reached level 40 ranged Laster (Damage). While yes it’s always a good idea to already have a gun maxed out for the skill you need. I was right on the edge for the Armatrix LR-35 (L) that I have been using and it was still worthwhile. It is always a bit strange when the “recommend” for such a gun like that is only level 35.

Hopefully, my next few hunts won’t be as brutal as some of these were. I don’t even mind them when they are small enough of a loss for the markup to make up for it. However, when you are nearing 50% there is no coming back on that hunt from that. You just got to move on to the next one.