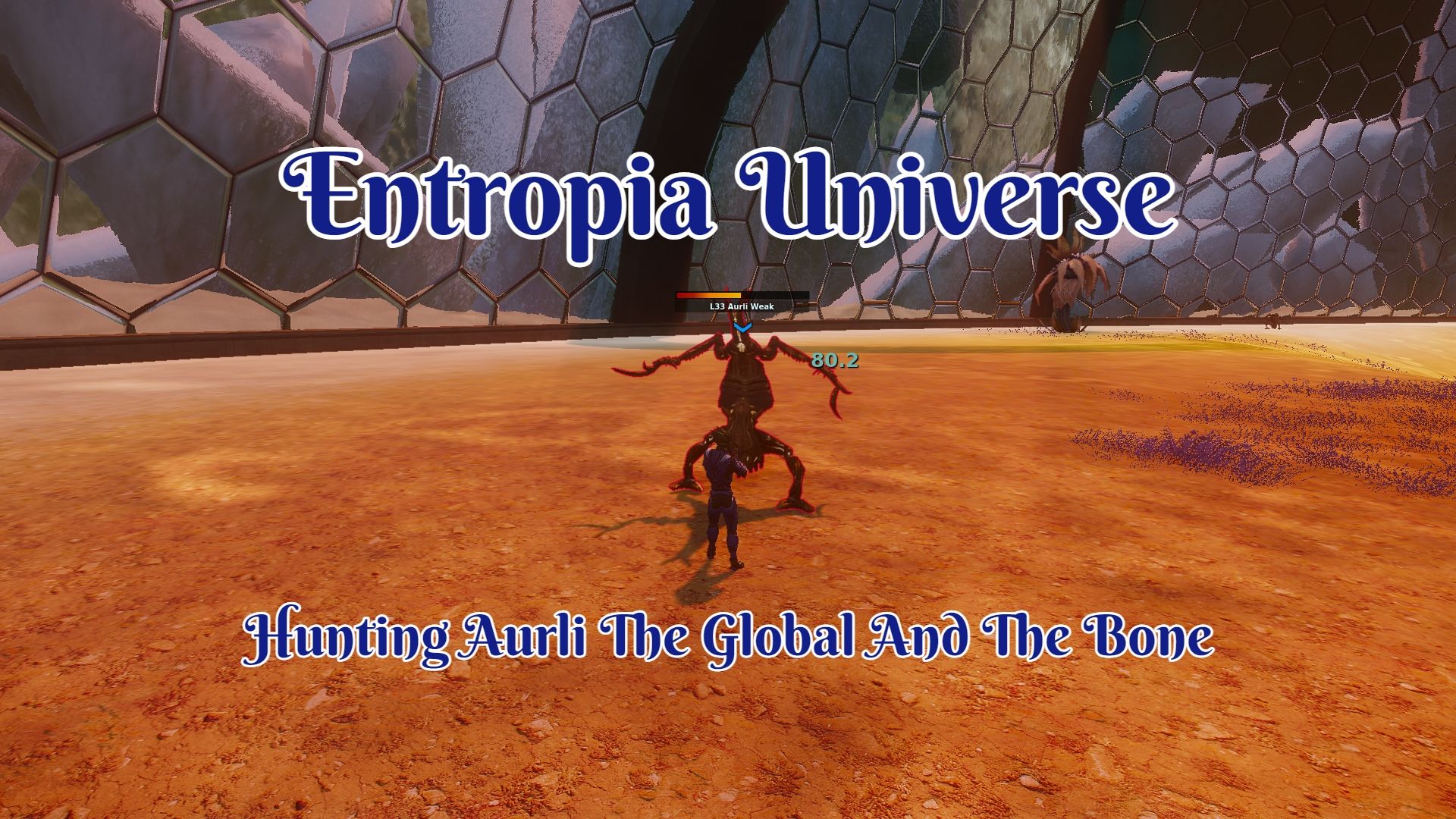 My second hunt on Aurli ended up going quite well. Since I will be farming the daylights out of these I’m not quite sure how many posts I’ll end up writing about them. There might be a few hunts in between or a bunch of them all included in one update. 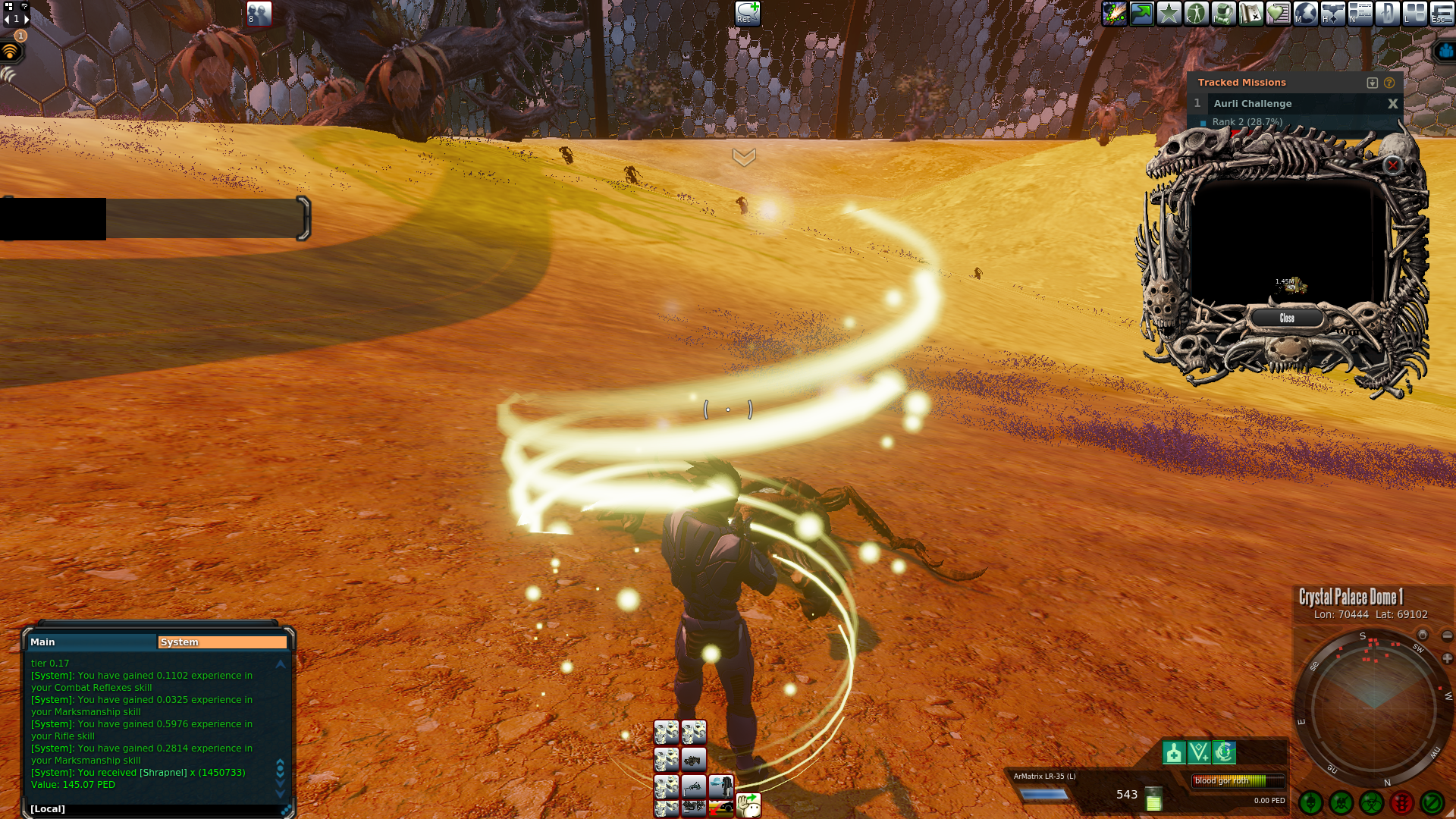 I ended up getting an ok global not that far into the hunt. Those are always fun as at this size it covered a large portion of my cost for the remaining hunt. While it was only shrapnel that dropped at least I can convert it into ammo for 101%.

I had hoped this was going to be a runaway hunt. Since I’ve been back I’ve not had an insane hunt it’s all been kind of not great. Another global or some big drops would have set me up nicely for a few runs of not caring if they were losses or not. While that global ended up being the single biggest drop for the night. I did end up finding a drop I’m after while I’m up here. This Aurli Bone Piece has a base value of 7.4 PED and is going for 170% markups.

These bones are something I’m hoping to see a lot of. Each time one of these bones drops you can just play a cash sound. They are supposed to be “common” drop but that just means you will see them on occasion a couple of times a week maybe as far as I’m concerned when it comes to this game.

The Aurli Bone Piece is highly sought after as it is used for making Armor Plating Mk. 5B. The very plating I’m wearing in my current gear for high stab, cut, and impact resistance is attached to a piece of gear.

The whale ubers in Entropia Universe need a metric ton of Mk. 5B plating. They can be upgraded a few times over in a process that destroys the plating itself. The final upgrade grants a 3% chance to block and adds a lot more resistance. With a higher durability amount as well.

Due to all of that the crafters of the 5B plate ask for a lot in markup and as I’ve said before it seems like quite the controlled production of them. While I could dream of having a single maxed-out 5B plate the fact of the matter is you need 7 for a full set of gear.

I don’t even want to know how much the total process even costs I just know you end up destroying quite a few mk. 5B plating all of which require an Aurli Bone Piece. I want it to rain bones down on me. My eyes will light up every time I see one. Perhaps one day I’ll know a crafter that will at least make it cheaper for me to upgrade to the first tier for a slight improvement by giving them the supplies to craft. While I was hoping the rest of the hunt would be amazing. It fizzled out. I think this might have been the third-biggest drop of the run and from there on out it was boring. At least I was getting something. I could have done this entire hunt and not even have gotten this. Even though it’s just more shrapnel I’ll just turn it into more ammo to keep going for longer.

This time around I did not have the dome all to myself. I also know I was not alone up here on the station either. Either someone was shooting a very high-damage high-cost gun in another dome or they were having one heck of a night. They were getting globules like crazy on Kreltins.

At some point when I need a break from Aurli, I’ll have to wander over to the dome with the Kreltins in it. They were however not on the menu for the night. They also don’t have a chance to drop as exciting things either.

Since I had other people in the dome I had to be a bit more careful. When there are just two of us in there one person seems to take one side and the other person the other side. Once you get three in there things can get a bit messy.

You can clear out an area quite well and at such a rate if you are not careful you will get a herd of Aurli spawning right on top of you. I have yet to make it to the far back or find a spot I feel safe trying to stand-in.

I have seen a few players try and fight somewhat in the middle. If the place is crowded that might be a somewhat safer bet. The Aurli move around a lot and usually I’ll see them spawn towards the edged of the dome and wonder their down to the middle.

You are however still not safe. There is a decent patch of them that appear to spawn down there as well. I usually try and keep a circle of an area that I can move around in clear. I don’t want to be standing in a single area for too long or I can risk getting killed.

I did not even get killed on this run either which I was rather happy about. With people in there, it’s doubtful you will get back in time to finish off a kill before it’s fully regened back to health. Not to mention if it’s in their way they will kill it instead.

I was hoping to have made more progress on the Aurli challenge codex. It seems however I’m going to need to kill quite a few of these per rank. At least the rewards have been a lot better than easier codex creatures. I’m mostly aiming to take skill rewards for evading.

When that is not an option I’ll have to open up my profession and skill windows and see what I need the most. Since the lower, it is the more experience I’ll gain from the rewards. Sometimes it’s just best to leave them unclaimed till you are sure what you want to take.

At least I put a decent chunk into getting through rank 2. It should not be long before I hit rank 3. It’s just a shame I can’t pair these with something else as well. At least some of the loot here has nice markup on it. On one hand, I am rather shocked my second run went this well. On the other, I was hoping it would be a lot better I ended up finishing 32% up. Despite getting a much bigger global than my first hunt on these I was up more on the first hunt. Either way, this will give me a little breathing room for a couple more hunts.