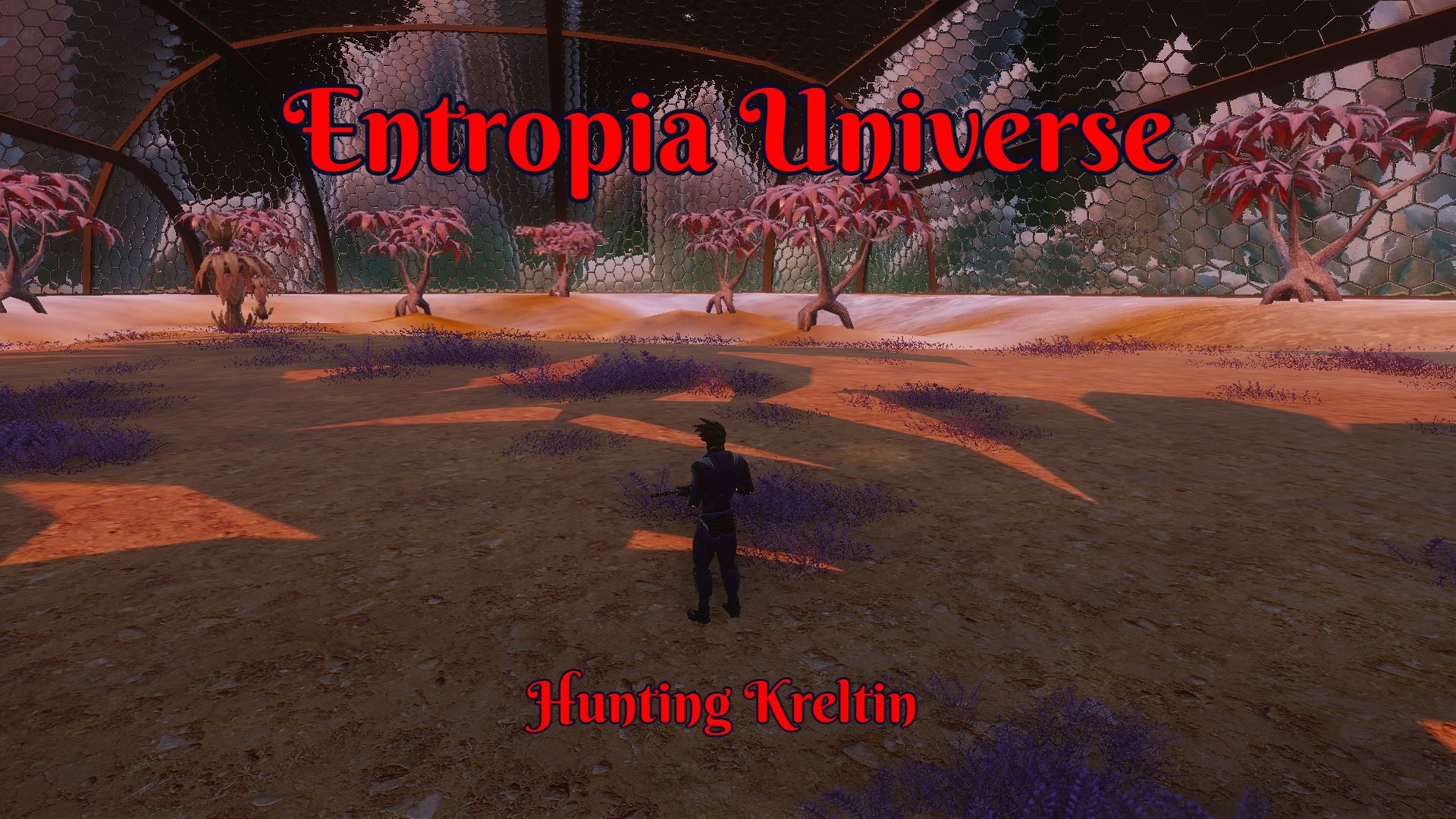 Being stuck in a bit of a rut on hunting in Dome 1 on Crystal Palace. I thought I would explore around and see what else I could find. Each dome is a little different and there are some other things to hunt than Aurli.

I first went off to Dome 3 since it has a higher level Aurli. I was not looking to fight the highest levels of them as I doubt I could kill them. Instead, I was hoping to snipe off some slightly higher ones that you usually only find rarely in dome one.

That plan quickly died once I realized I was quite trapped by higher-level Aurli that I could not kill. I hate to think about the kind of gun and gear I’d need to fight those things off with. I for sure know I lack both the equipment and skills to pull that off.

I next went off to Dome II. There I would find mostly Kreltin Young to hunt. They do have some decently high markup items such as components s, alien parts, and Kreltin parts that drop. While they have some very rare gun drops they are all old school and I doubt they are worth anything with how bad their efficiency rating is compared to newer guns nowadays.

What did catch my eye is they can drop a few unlimited pieces of Shadow gear. They also drop the limited versions as well and a few other pieces. Just one of those unlimited gear drops would more than cover this hunting trip but many more to Crystal Palace along with all my hunting losses since returning and then some. Assuming I understand the current market price of them and what piece that drops.

They are however quite rare to find. It is also no shock I did not get any. One can only dream. Who knows if anyone would even be buying nowadays and what the prices would even be with such a rare find.

I at least did have quite an enjoyable run on Kreltin. Their teleport in the area was quite buggy and at first, I thought this hunt was going to be a scratch as well. There appear to be some server issues when you are not on the same server as the creatures in the dome in a select number of areas around the teleporter. As a result, I ended up walking back into where the Kreltin could both be seen and attack me. At one point I had three of them on me at once and almost had a fourth join as well. Thankfully the gear I had which is the same setup I have for Aurli kept me alive.

Dome II feels and looks a bit smaller. The Kreltin are also jammed back in their so tight it was hard to move around. I never did find any spot I felt was going to be a safe place to try and grind things out. At least the edges around the dome looked to be free of spawns.

However, like in the other dome once you kill things the edges tend to be where fresh spawns come in on. Then wander down towards the bottom of the hills in the dome. I was moving around too much to take notice if they had the same behavior in this dome as well.

What is nice at least is that Kreltin has a challenge codex to do for skills. Since there was an odd one or two of them in dome one where I have been hunting Aurli I had a decent amount of progress towards the first rank.

Kreltin themselves have a bit less health than Aurli. They however still have a decent health regen rate and enough health that can make them a bit of a challenge if you get too many of them on you at once.

I also found myself needing to heal a little more often. I suspect that was because I kept getting Kreltin adds on me. As I attempted to stay ahead of getting a bunch of them respawns on me. I was in shocked to find that these drop Animal Spleen Oil. Just one unit of them is 5 PED and unlike a lot of other oils, you tend to get as a common drop it has a 105% markup. That is not a crazy amount of markup that is something to keep in mind.

These are also over 1.5 PED cheaper per kill as well. So I was expecting some smaller and less valuable oils to be dropping. These ended up saving my hunt a little later. I also got a couple of Alien Resin Fluid. They are however only a base value of 0.120 PED per unit. The markup on them seems to be all over the place as well. I’m guessing many don’t hunt Kreltin so it’s hard to have a huge enough stack to sell and people take what they can get. At one point my screen flashed all kinds of different colors. I looted as soon as I killed a Kreltin. This finished off my first rank of the codex for them. It was then followed up by getting a 69 PED global. If only that is how it always worked!

At first, I noticed the Animal Spleen Oil with it being over half the value of the drop. I was rather thrilled all on just that since it was not mostly Shrapnel. Then I noticed the 3 PED of Tier 8 components. Those are going for around 500% markup these days so that's about 15 PED right there.

I recall my first few hunts on Aurli and they were giving me a slight amount of Tier 8 components. Then they dried up and I have not seen any since. It is rather interesting that I ended up getting such a nice markup item off the lower health Kreltin.

This almost makes me wish I had gone up here to hunt these things. I have many years ago done some hunting on them. It was long before codex and it’s a shame I did not get to keep the unfished iron missions I had some progress in towards them. 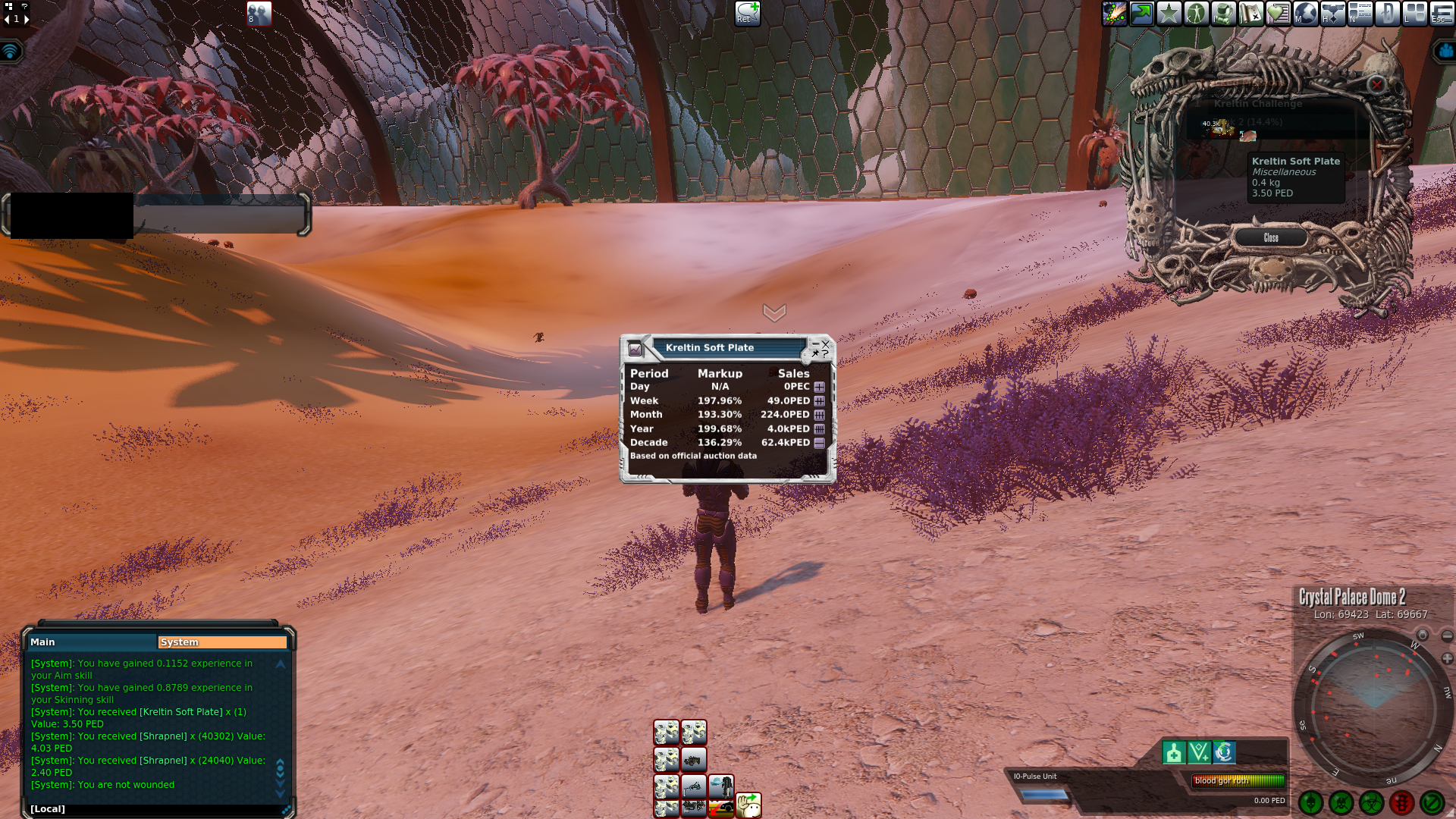 A little while later on that hunt, I found a Kreltin Soft Plate. Dang, that is some nice markup on them as well. It also has a base value of 3.5 PED. While it was the only one I ended up finding on this hunt someone had a buy order for them at a 200% markup. This is great not having to hold onto this in my inventory for months or years if I don’t hunt them again.

I’ll have to run these again at some point. I’m sure I just had some great luck. If this is how they always treat you though I would expect that dome to be filled with people farming them day and night. I ended up finishing this hunt up 0.50% before markup is considered. While that alone is not amazing a lot of my hunts as of late have been brutal. I also had a few nice markup item drops. While nothing insane it will help me recover some of my losses later on. If only I was getting that kind of markup all the time.