In Entropia Universe grinding Exarosaur is a bit of a rite of passage. It is something most players are told to go out and do. There are quite a few reasons for doing so. I thought it be fun myself to go out and grind a bunch of the low-level ones since it has been ages.

There is an old saying in Entropia Universe that you should grind Exarosaur till you can’t stand it anymore. Then and only then do you know the grind has just begun! Some players might only spend a few hours grinding on them while others keep going back year after year. I can only assume the ladder of the two has lost their minds. My own personal biggest reason for grinding Exarosaur is working on the codex for them. They are quite low-level creatures. While the skill gains from the codex are not amazing they can help rank up your meta progression for attribute points.

In terms of how old the game is and how long players have been told to go and grind Exarosaur for the codex, the system is rather now. It is a low-level creature that can help newer players gain defense and weapons skills. 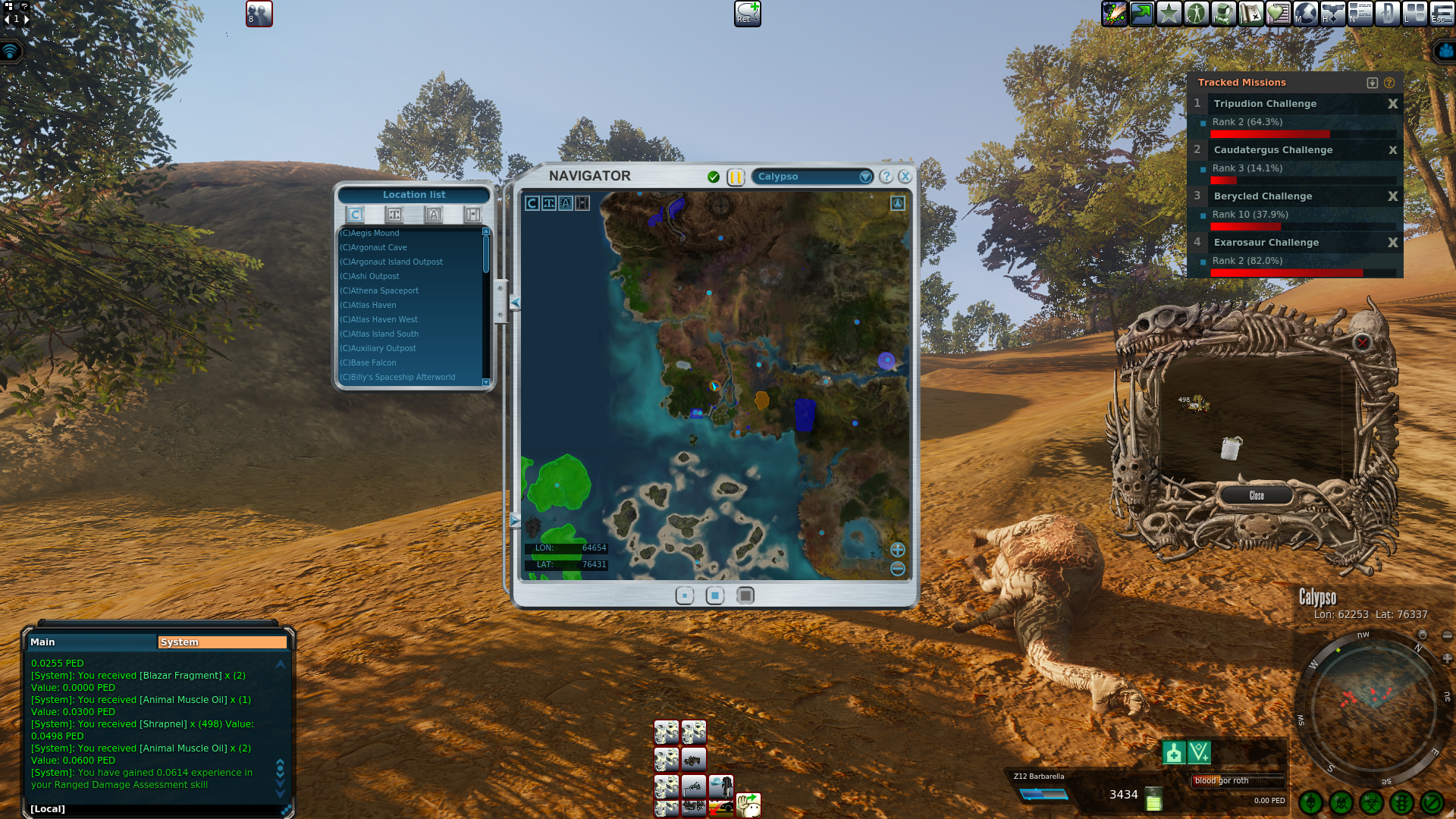 They can often be found in quite large quantities at a few different locations as well. Like many players, I prefer the ones near the swamp which is north and then slightly east of Port Atlantis. While there is no teleport there you will find a build for repairing and trading with the trading terminal. It’s also quite easy to just walk from the city.

Along the way to getting to this location you more than likely would have killed some even lower-level creatures that have puny in their name. You might have even been lucky enough to loot a Nova Fragment. If you had checked out the market data you would have seen “11k% markup” – OMG! While you could further grind out those puny for some codex as I did since I needed them anyway. It is worth making it to the Exarosaur. They as well drop a fragment it is however a Blazar. You might also notice not only does it have a higher trade volume per day than the Nova. It can also be sold for 131k-147k% markup.

You might be wondering what is the catch? You see they are just fragments. You loot one and look at their value and you will see they are worth 0.000 to the trading terminal. You will need to farm quite a few of them to have enough to find a buyer in either trading chat or listing them on the auction house.

The reason Blazar Fragments have such a high markup is every single unlimited item in-game if you want to tier upgrade requires Blazar Fragments. While it is also used in some crafting it’s not as big of a deal.

We are also not talking small amounts either. If you want to max out an unlimited item at tier 10 that could cost you 50k Blazar Fragments along with a lot of other stuff. That is almost 700 PED worth of the fragments at the time of writing this just for that final tier. 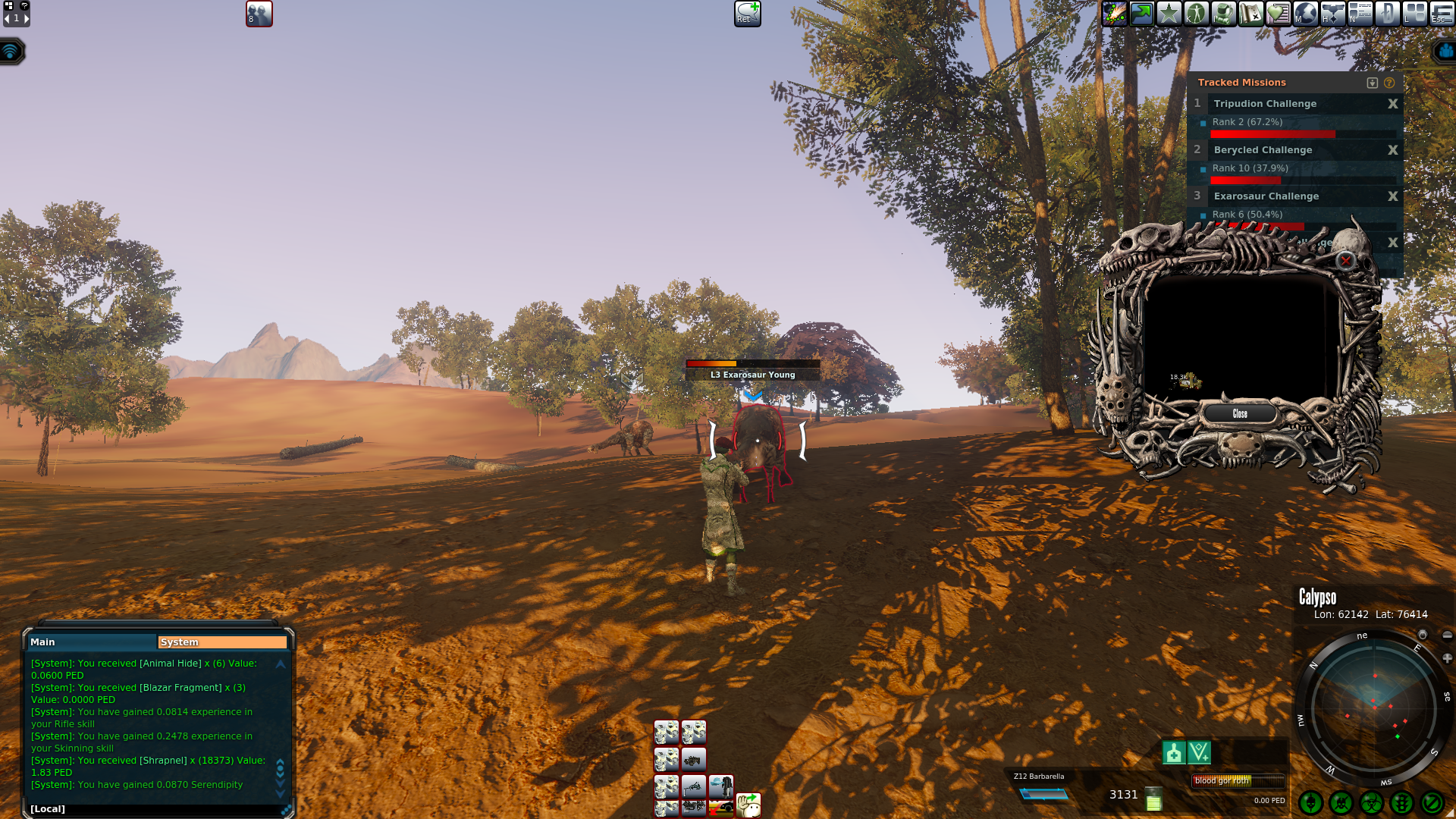 Exarosaur is what many players consider the first well-known creature in the game that players have profitable off from farming. A lot of free-to-play players have been known to grind the daylight of these things over many years.

If you work out some quick math on how much ammo I would need to cycle farming these to get enough just to tier an item from 9 to 10. You will soon realize that just not going be a thing the majority of the player base in their lifetime of playing will do. Even more so since these fragments no longer drop from a lot of things they use to. That however is not where the fun stops. You can also loot Tier 2 components. You can see in this kill above I ended up looting 4 that have a vender value of 0.5600 PED. They were also going for around 130% markup. I was usually getting 2 to 3 of these in a run. But wait!!!!! There is even more. I ended up both being a lucky and unlucky player. I looted a rare for this creature armor drop. It was the Shogun Shin Guards for females. With it being a lower-level gear piece it was not going to be worth a lot. Female gear also in general is worth a lot less since most characters in-game are male.

The Shogun armor piece has a low trading volume with three or more listings of it for sale at the auction house in a given week. If it had been the male piece I could have at least worn it and it might have inspired me to work on getting the rest of the set.

With how low of a health Exarosaur are and how many times I shot and killed them. It was not that shocking I got a rare drop from them. It was still not something that should be expected. If you grind them long enough like anything it can happen. 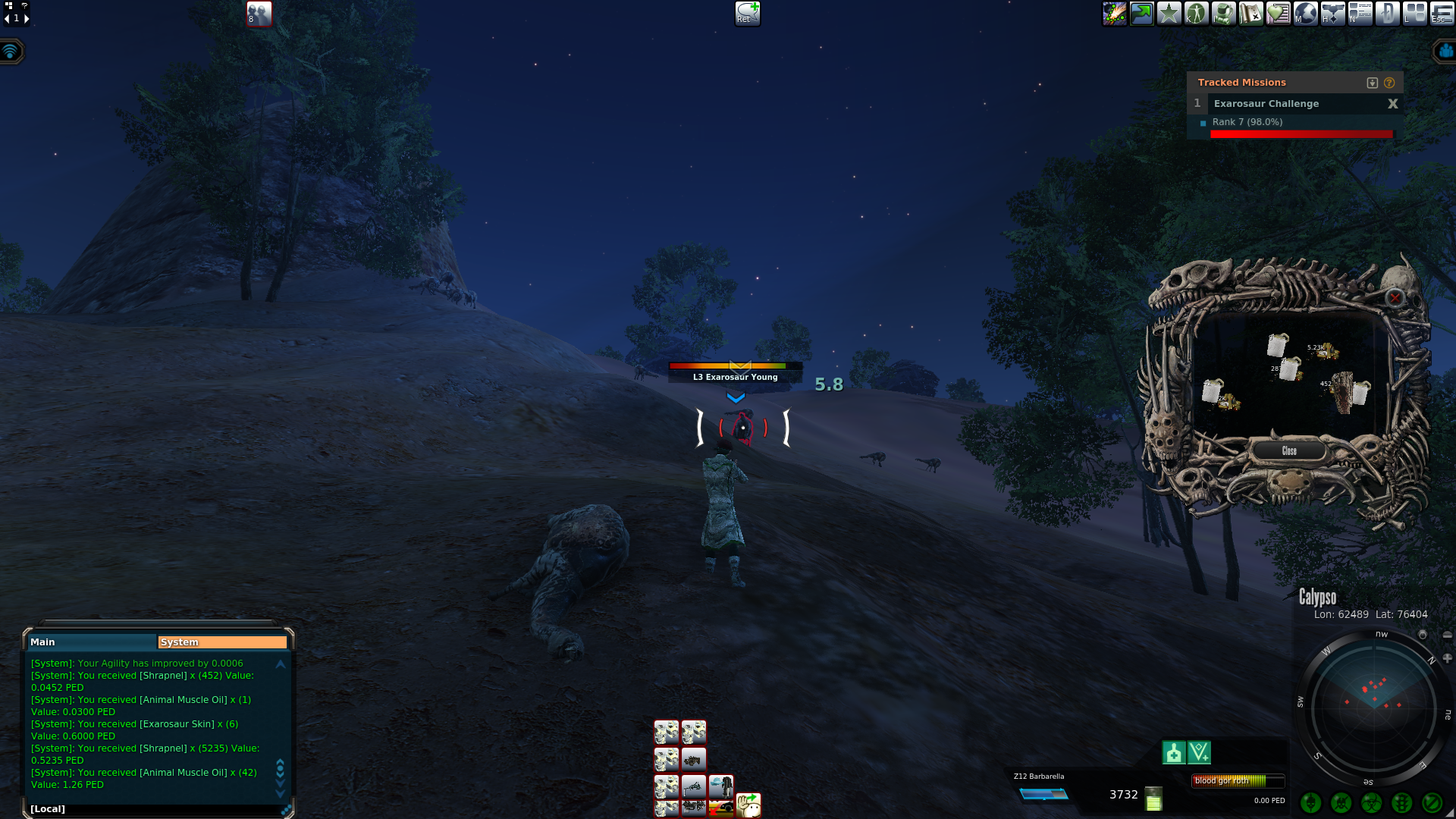 While it is not a guarantee that you can profit off of hunting Exarosaur till you go insane. Once the markup is included for the items that dropped I was making a small profit on 60% of the hunting rounds I went on of 100 PED cycled.

With that said it takes quite a long time to kill a lot of Exarosaur with 100 PED of ammo. I would have to repair the amp on my Z12 Barbarella about three times per trip. This is why it was so helpful having a repair terminal just a few steps from where I was hunting.

I ended up profiling a little over 3% in the long run hunting them for the amount of time I did. With Blazar Fragments markup accounting for almost half of that total profit. This just goes to show you while a single unit of them is worth almost nothing before markup they became quite important once that is factored in.

There is however a giant difference between myself and a new player. To be able to get that 3% long-term profit I was already maxed out on the gun I was using. You will also notice while I was wearing my overcoat I never had any armor on. I also never healed and would just afk if needed to regens some health. As a result, I never had any decay from those things to account for which would have cut into my profits.

I at least found hunting this a lot more fun than sweating. Some players will even sweat the Exarosaur dry and then kill them. I’m just not the kind of person who finds that enjoyable.