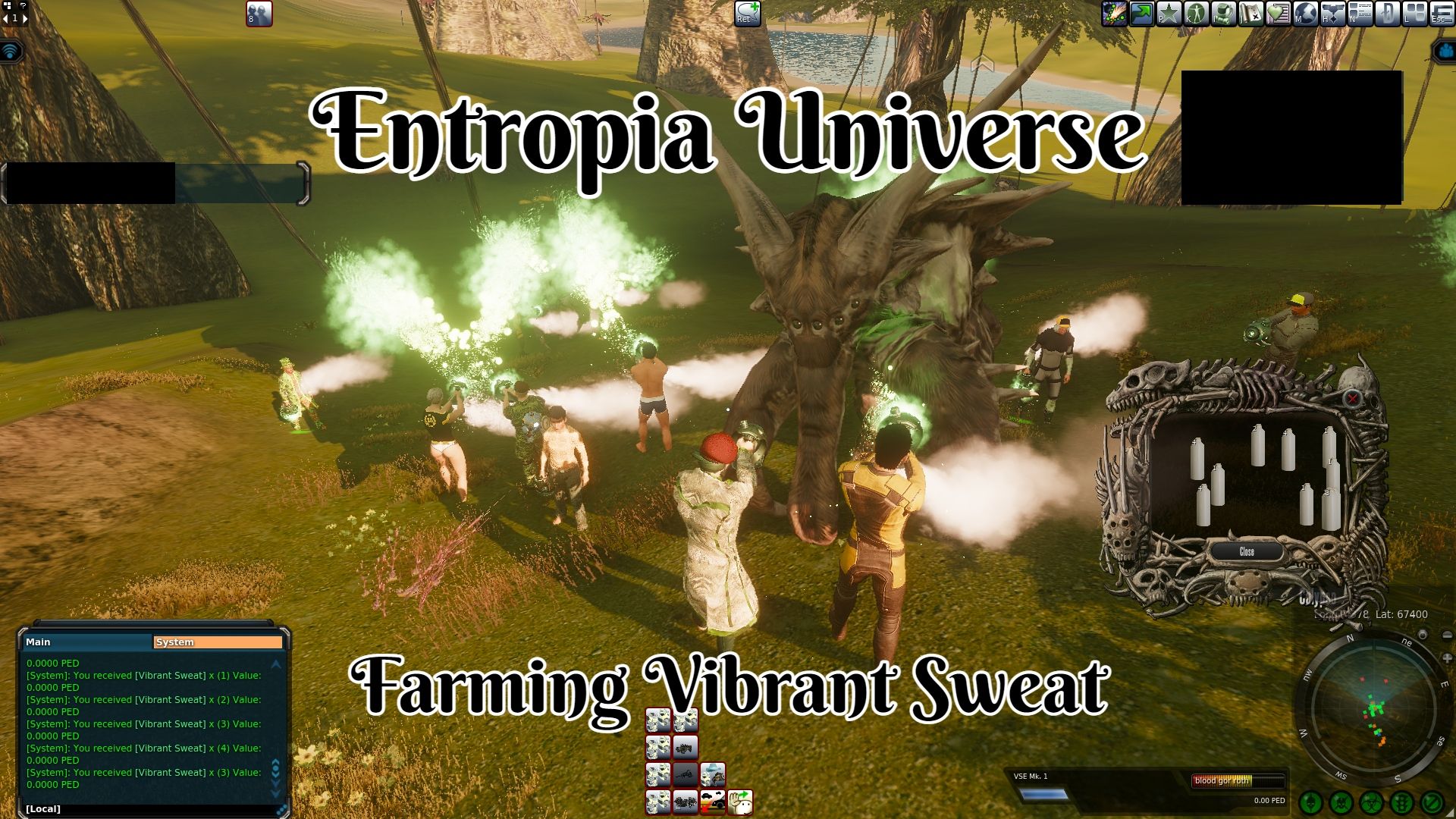 Many times in Entropia Universe players are looking for activities where they can earn some PED without it costing them anything. One possible thing to do is sweat monsters either solo or with a pack of other players. The Sweat that is gathered then needs to be sold directly to another player or converted into something that can be listed on the auction house.

The biggest reason sweating is a free activity in Entropia Universe is that you need a special tool to do so. The tool VSE Mk.1 is something every player gets and it has a value of 0.0000 PED max. It is something that cannot decay and you don’t need to repair it.

While there are a lot of limiting factors when it comes to sweating and how much you can farm per hour. One of the biggest ones long-term is the fact that there is only one tool. No matter how high you level up the Sweat Gatherer Skill you are not getting a better tool to collect more of it.

Each time you have a successful sweat action you are only getting 1 to 4 Vibrant Sweat. You will often get a lot of failures in between success. The biggest factor in how much you can farm per hour depends if you can survive hits when betting attacked by the monster and how well the sweating circle overall is performing with uptime.

Sweating is also an activity in that people remove anything like armor that can decay when it takes damage. It is also not uncommon for players to not heal themselves when they get killed. All of these things cause decay which could cut a bit into your bottom line.

While I do not enjoy sweating and I’m not a “pro” at it. It’s something I’ve done in the past and I decided I would do it for a full six hours to see what kind of returns I would get. The returns were a bit all over the place as to how good the sweating circle is has a massive impact on how much per hour players are getting.

A sweat circle comes about in select locations on each planet. Players are often looking for a certain type of monster that a large group of players can collect a fair amount of sweat from. After so much is collected the monster dries up and everyone has to move on to another.

Since players get killed they are usually quite close to a revive point. Making it quick for a player to rejoin the circle when they get killed.

They are also outside of the range of turrets from say an outpost. They are far enough so that a monster is not accidentally dragged and killed into it before it runs out of sweat. Not too far that once it is out of sweat that it can be taken to the turret to be killed.

Early on in a player's journey in Entropia Universe sweating has some nice side benefits. Many of the players who enjoy sweating in the game tend to be social if they are active sweaters. While the Sweat Gatherer Skill itself is quite useless you do have a chance of getting skills like concentration. As you get hit by the monster you are sweating there is always a chance to gain a defense skill increase. You could also earn a little PED.

For a higher-level defense player if the sweating circle is on lower-level monsters the defense gains from 6 hours are almost unmeasurable in games. For newer players though it can be quite beneficial to start building up those skills at zero cost.

Some people even believe newer players should spend months sweating for defense and other skill gains. I feel that is an old way of thinking about it. Back when there was a more noticeable gain from doing so.

Sometimes you can get a lively sweat circle chatting away in local chat. That was not the case when I went and did it for six hours. I do know they do have their chat nowadays which can be asked for local.

Back in the day, it was not uncommon to make friends and even go hunting or do other activities with people you started sweating with. Social aspects in Entropia Universe can be worth their weight in gold. As far as sweating itself since I’m on Calypso the more popular place to do it these days is at Boreas Outpost. While it is a bit of a travel for a newer player who might only have Port Atlantis teleport. You can at least get there yourself, be it, with some challenges along the way.

The old popular sweating place many years back you would need to ask for a ride from someone to get to for the first time to getthe teleport. So there is at least an improvement for that starting that want to give sweating a try.

Once you arrive at a sweating circle location you just follow the mass horde of green dot’s representing the other players. People are constantly running back after they get killed. They will lead you right to where it is.

The sweating circle got its name as people tend to surround the monster they are sweating. In an ideal situation, a decent circle has formed where the monster being sweated is not bouncing around all over the place. As that tends to cause the circle to move around and might put people next to where monsters will respawn. As you can see from the screenshot above I’m getting the message that no more sweat can be acquired from the creature. In this instance there happened to be someone who was killing them for the loot. In situations that did not happen whoever the monster was attacking needed to run up to hill till it was killed by the turret. 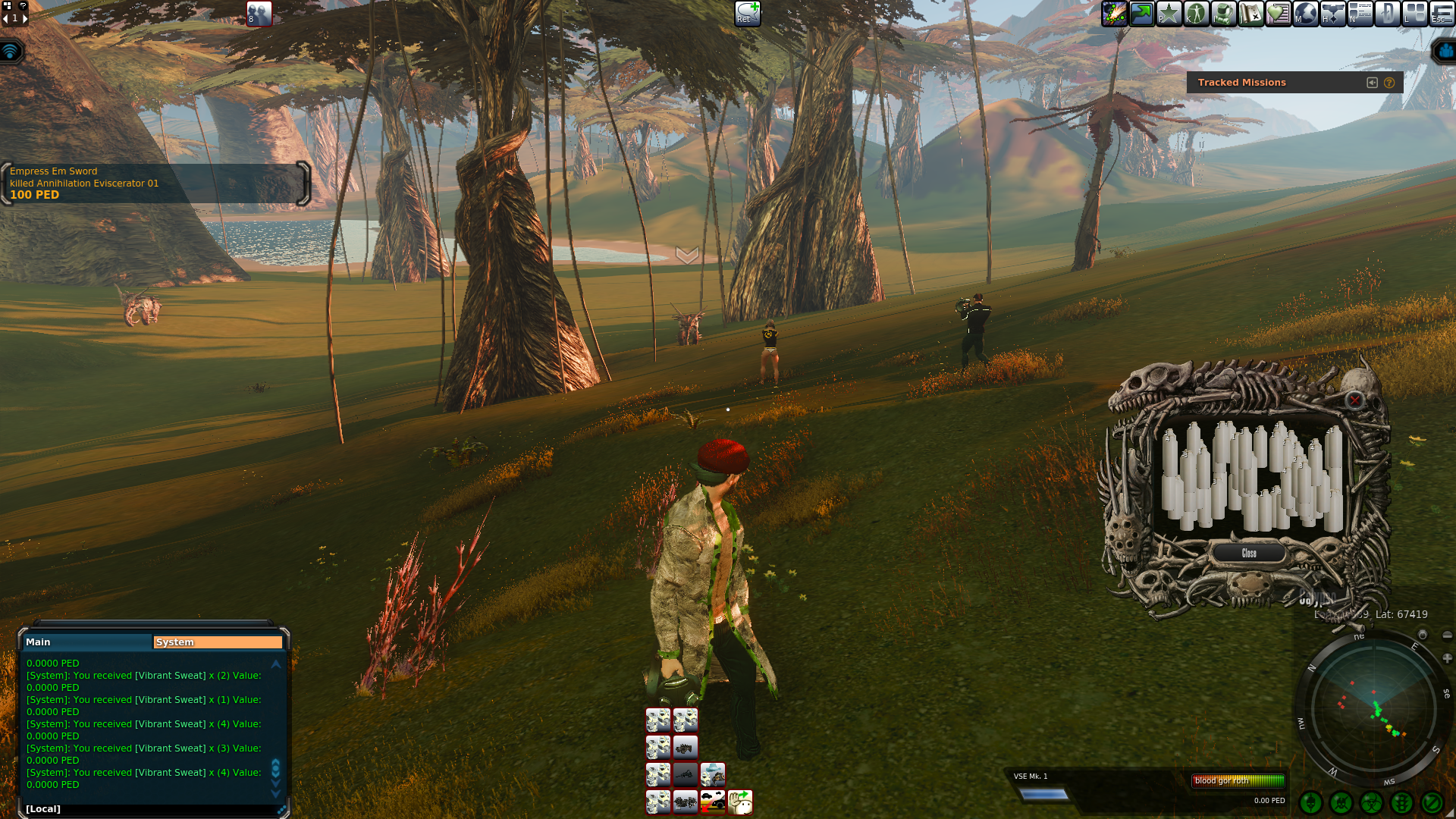 While that is going on there is usually someone running out pulling the next monster to bring to the center of the sweating circle. You however do not pull with a gun and use ammo. Instead, you use your sweating tool to tag the monster and bring it in.

My first hour of sweating with the group there was amazing. Most players were only semi-afk so they were reviving and running back we get killed. People were pulling a new monster in for sweating. Any monster that no longer had any sweat was getting killed.

I ended up pulling in 497 Vibrant Sweat. This would be my highest hourly amount for the day. 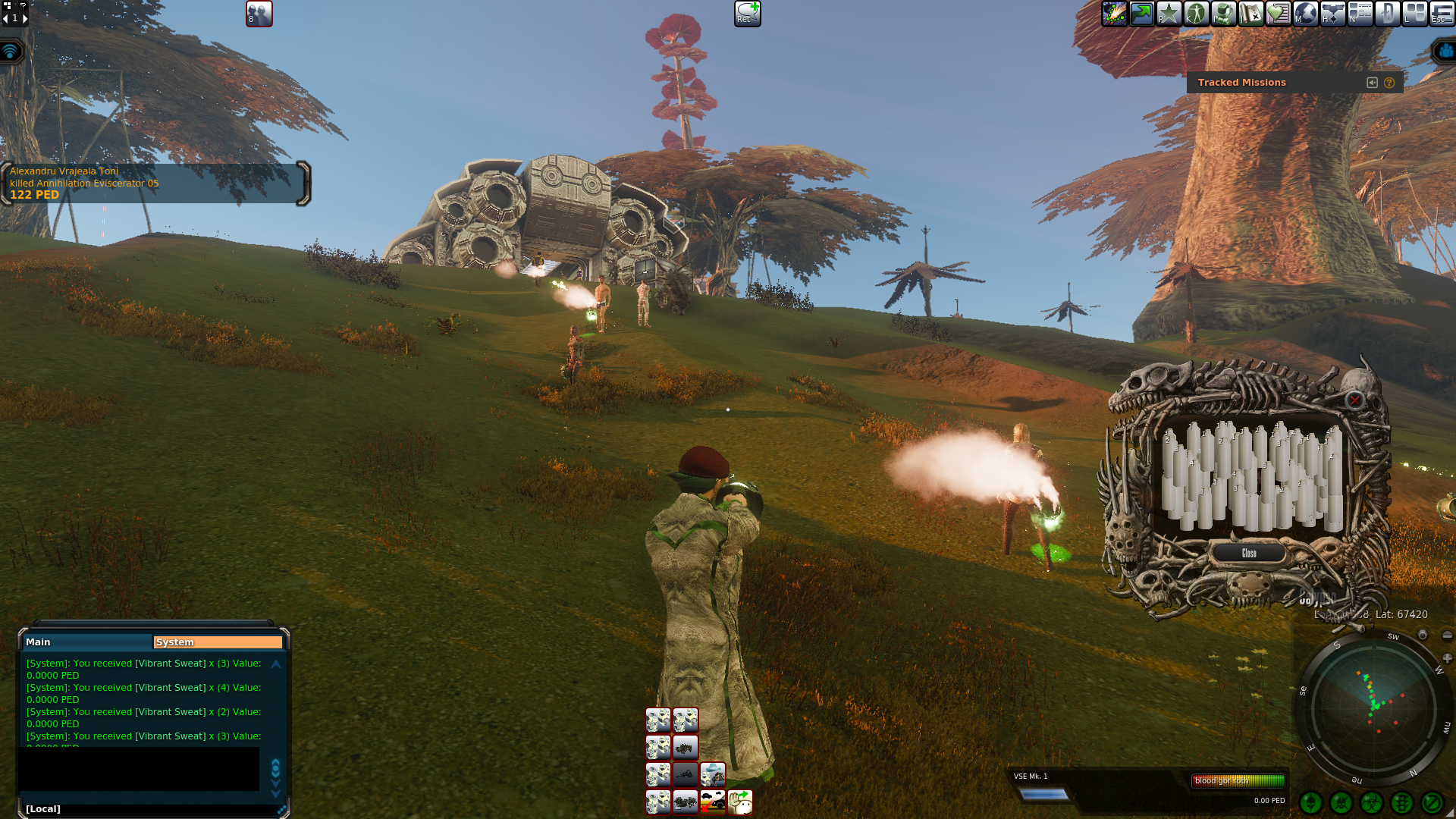 In my second hour of the day, the circle broke down. A lot of players were semi afk not paying attention to what was going on. It’s not uncommon for people to watch TV while they are sweating.

You can see on the mini-map that there is a line right up to the outpost of people following due to their tool being active when a monster got dragged up there to get killed by the turret. This can also make it hard when an inactive player is pulling aggression and others are trying to get the monster up to the turret. 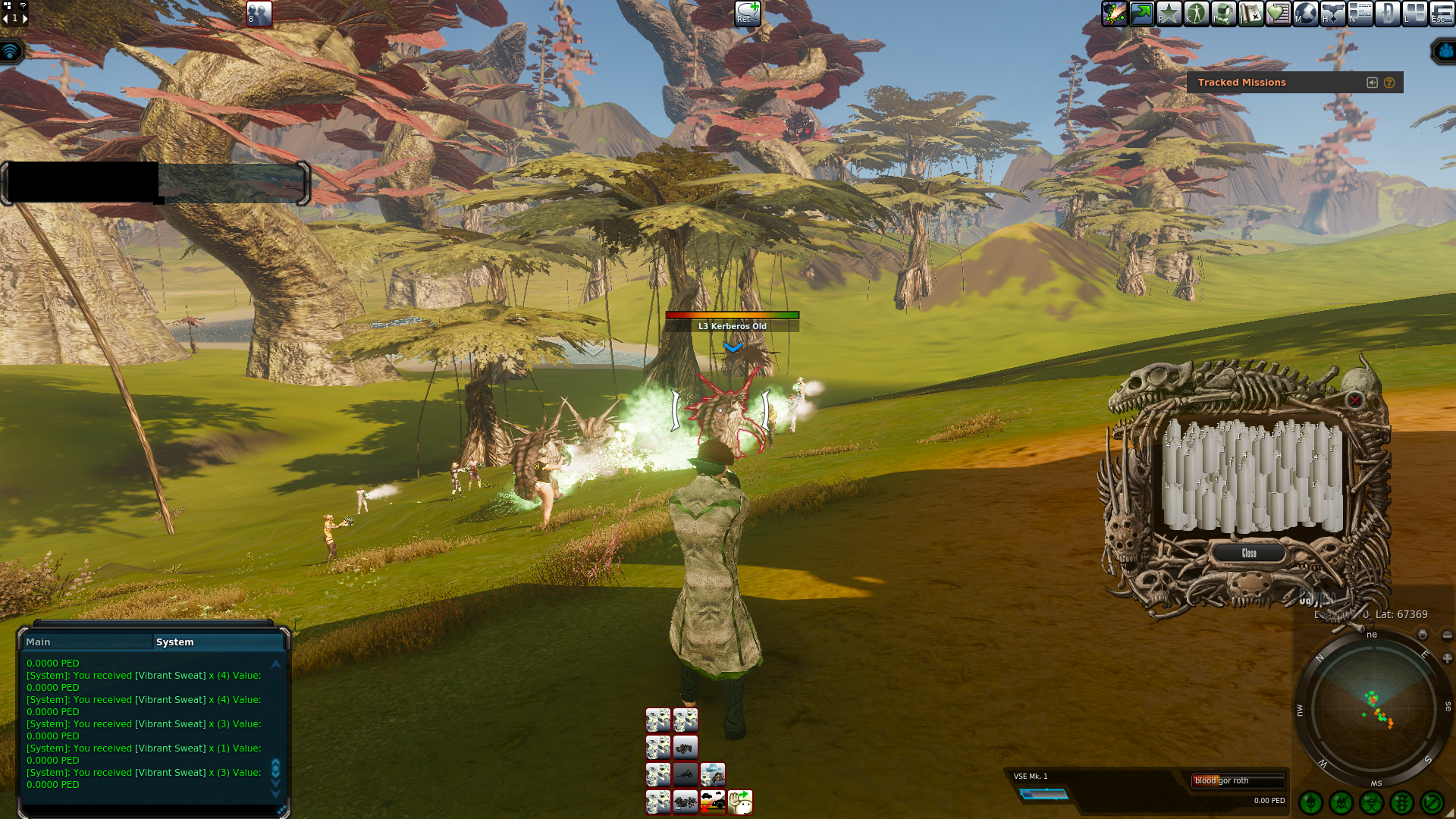 For the third hour, I decided I was going to be super lazy. I put my tool on auto and pointed it towards the middle of the sweating circle that was more of a scattered line plot than anything else. If I died I’d just wait till I regen back to full health before running back. I was doing what a lot of other players were doing.

This netted me the lowest of the 6 hours with just 213 Vibrant Sweat. I’m not shocked by the amount. 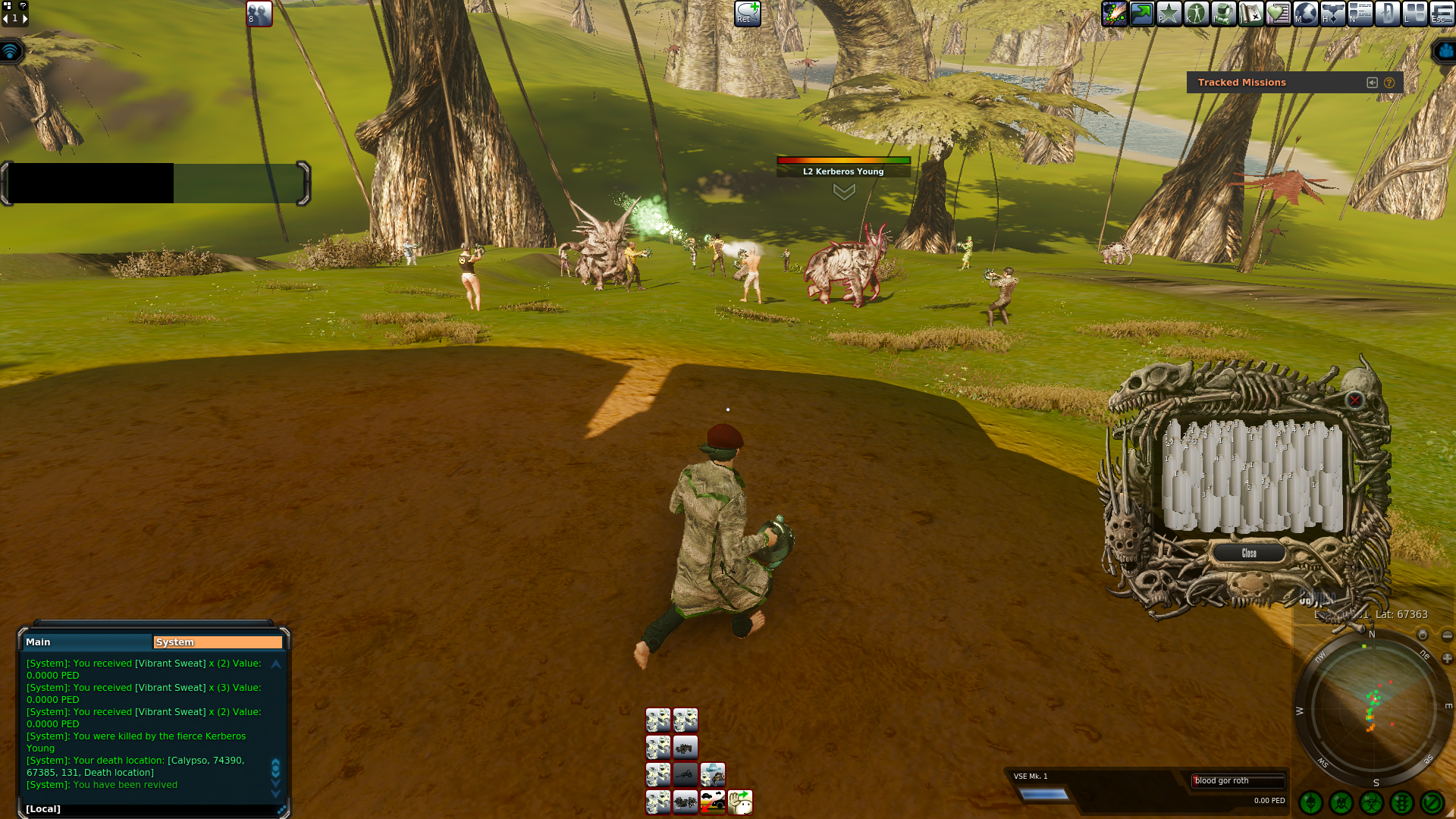 In the fourth hour, I started to take a more active role in helping out and paying attention. There were a lot more active players than during some of the other hours. I ended up getting 450 Vibrant Sweat Everything was going great in the fifth hour till some crazy high-level monster got into the sweating circle. While I did not get a screenshot of it and have no clue how it got there. It was dealing 80 to 110 damage a hit. It wiped the sweating circle over and over again.

I for sure thought this was going to be the end of it. That I would be calling it after that. After a few deaths, it was gone and we attempted to move forward with the few remaining active players.

It’s quite common that if a sweating circle is not going well or if there are not enough players people just leave and come back another time. I’m shocked we recovered and I ended up getting 369 Vibrant Sweat. In the sixth and final hour, I was getting quite tired. It was also late at night and it must have been for a few other players as well. As you can see there are quite a few monsters in the camp and everyone is all over the place.

Still, 319 Vibrant Sweat was not the worse of the night.

In total, I farmed 2221 Vibrant Sweat. What is that worth? Well, that depends on how you sell it and the market conditions. I think it’s fair to say it's worth somewhere around 1 to 2 PED per 1k units of sweat. With a more realistic number being about 1.4 PED per 1k.

You don’t often see wild swings in the sweat market as some players have massive stockpiles. Some people sweat every day and have been for years or even decades. There are wild stories out there that some are sitting on 250k or even more.

You also can’t just drop Vibrant Sweat up on the auction house and call it a day. At least not in its current form.

Some players will try selling it locally, in main gathering areas for the planet, or trade channels by saying things like “WTS Sweat 1k/PED.”

If you are super lucky while sweating someone announced in local that they were buying sweat and how much they were paying. Back a few years ago when I gave sweating a try for a week I had someone on my contacts list to whom I was able to sell the amounts I was gathering to. That person is no longer playing.

Cold selling this stuff for the free-to-play player use to be mostly how they went about it. Thankfully they do have different options. One of them that is putting some buying pressure on the market as well as a Galactica Stage 1 mission that asks for 5k Vibrant Sweat Crates. 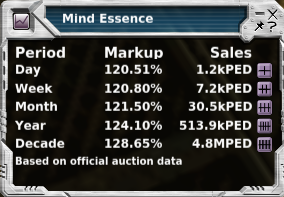 There are also quite a few blueprints that call for Vibrant Sweat. That however goes beyond the scope of this post.

In the end, you will need to research to determine which way of selling is best for you. Finding a buyer for a direct trade could take weeks but not cost you anything further. While refining or crafting it into something that can be listed on the auction house has listing fees and might not sell.

While the 2221 Vibrant Sweat I got could be considered to be worth around 3.11 PED. I would want at least 5k of it for it to be worth the costs and time of trying to sell or refine it. Perhaps in the future, I’ll want to catch up on a show and I’ll go out sweating some more.