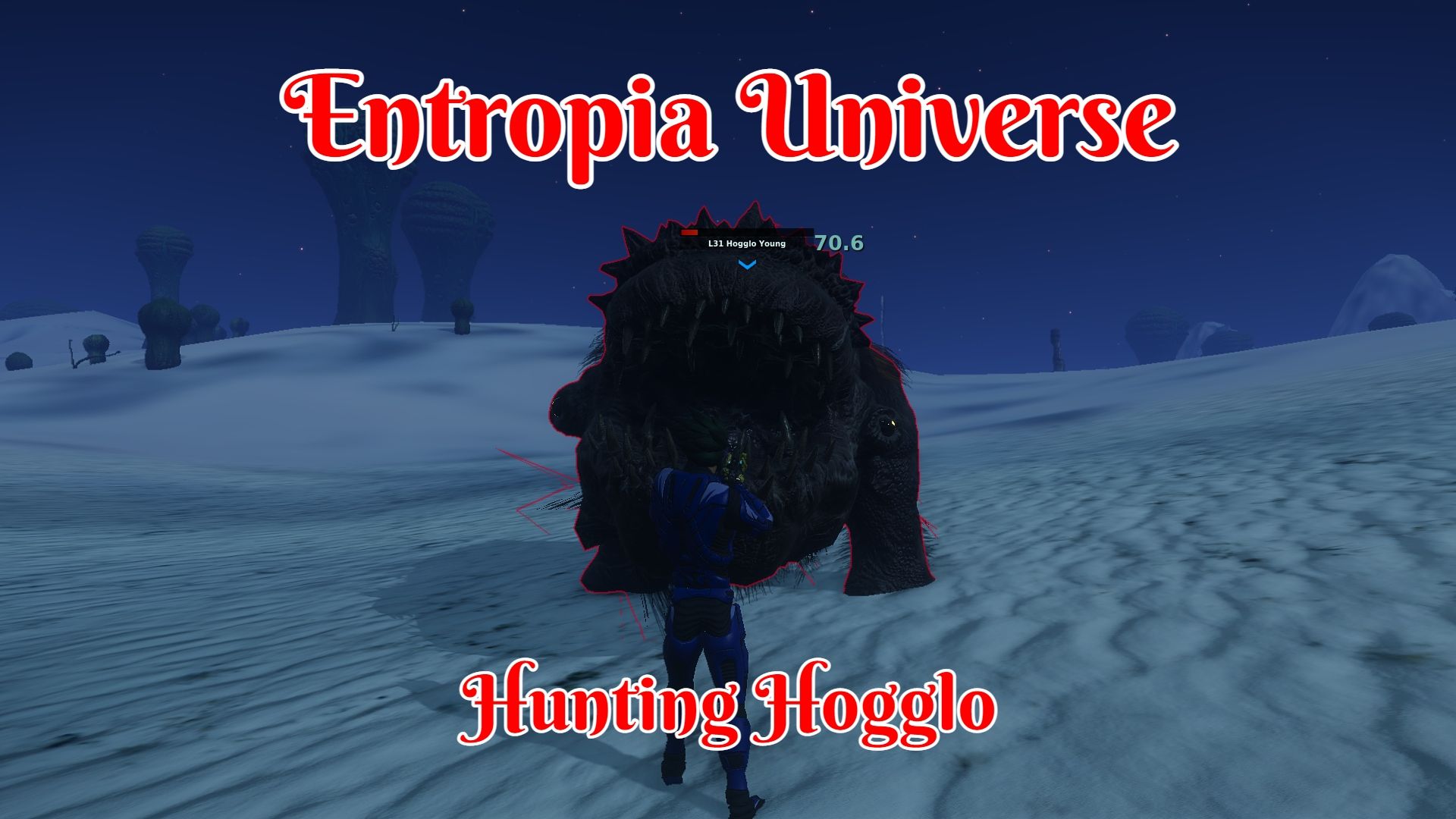 In Entropia Universe, it’s not always the smart thing to do something but rather can I do it at all sort of thing. Hunting Hogglo with my kind of armor and evade level I would not put down as a smart move. It’s however something I’ve always wanted to give a try.

While I am still missing the gloves for my Gremlin armor set I’ve bought the rest of the pieces after failing to farm them myself. I have also picked up Mk. 5B plates. This will allow me to hunt some bigger creatures in Entropia Universe. The question comes down to how big can I go?

While I do have some decent stab, cut, and impact defenses now Hogglo is no joke. People that I do know who hunt these tend to use the better gear. Unlike my gremlin that is UL (unlimited and can be repaired) they tend to use (L) (limited and cannot be repaired). Since they need even higher defense for the amount of damage these things can cause the bigger of these creatures you hunt.

I have also increased my skills that I can use a bigger riffle than I have been wanting to try. While I don’t have attacks per minute maxed out yet I’m rather close to doing so for an ArMatrix LR-35 (L). The damage is there which is what is important for me.

I’ll also be equipping that riffle with some attachments. An ArMatrix Extender P20 (L) has a lower markup and shares 20% of the decay. Along with switching out my lower Omegaton A104 UL amp that adds 14 extra damage for an ArMatrix L-Amplifier 33B (L) that adds 33 damage. I’ll be needing all the damage I can get even if the markup is quite high.

The lower young maturity of Hogglo has 2k health. That I don’t think is going to be a huge issue. They don’t gain a lot of health per maturity till you get to the hardest ones. They however do gain a lot more damage the higher maturity they are which will limit what ones I can even hunt. 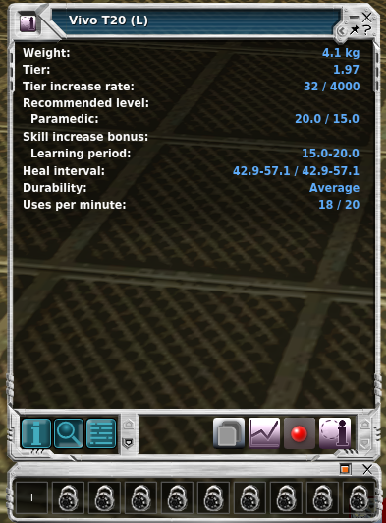 The only thing that won’t be getting a massive upgrade is the tool I use for healing a Vivo T20 (L). I also have some lower and cheaper UL healing options for when I don’t need to heal in combat to save up on burning items with high markup on them that can’t be repaired. In my many adventures, I have discovered a location to hunt Hogglo on Amethera Outback Land #34. While it is on owned land that land has zero tax set. The only thing to worry about in this area is running into buffed Atrox that take about double the ammo kill than a normal one.

Parts of the area have very spread out Hogglo spawns while other parts have a bit more dense population of them but not by much. While I would prefer not to fly around trying to find my next one to hunt. This is not a creature I want to accidentally be fighting more than one at a time.

It was now time to go out and see how it goes. The area itself is a frozen wonderland void of much else other than some dead-looking plants. You get sweeping fog that just sends further chills down one's spine. 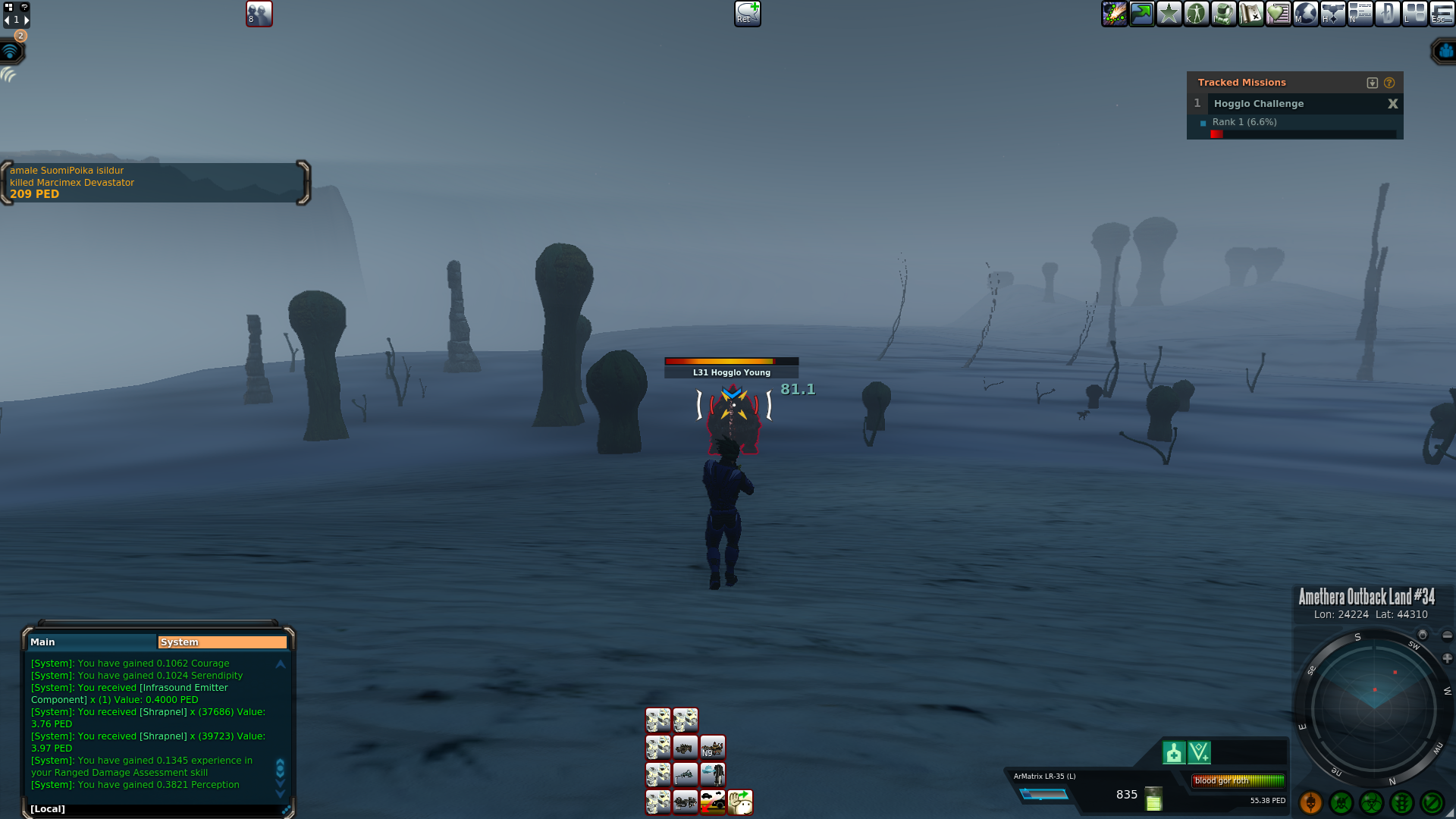 Since I’m using a rifle that has decent range and I have lots of space to walk around in. One of the tactics I would deploy while fighting Hogglo is walking backward. This will put a lot more space between the Hogglo and myself allowing me to get down more damage before they came into melee range. Once they are close enough I stop walking backward and focused on the fight itself.

It became quite apparent that the armor I was using was not going to cut it quite enough with my skills. While you do expect to get killed on occasion while hunting something like this it was quite rough. I had moments where I was barely keeping up with healing once they got into range on me. This makes the decay costs skyrocket per kill. 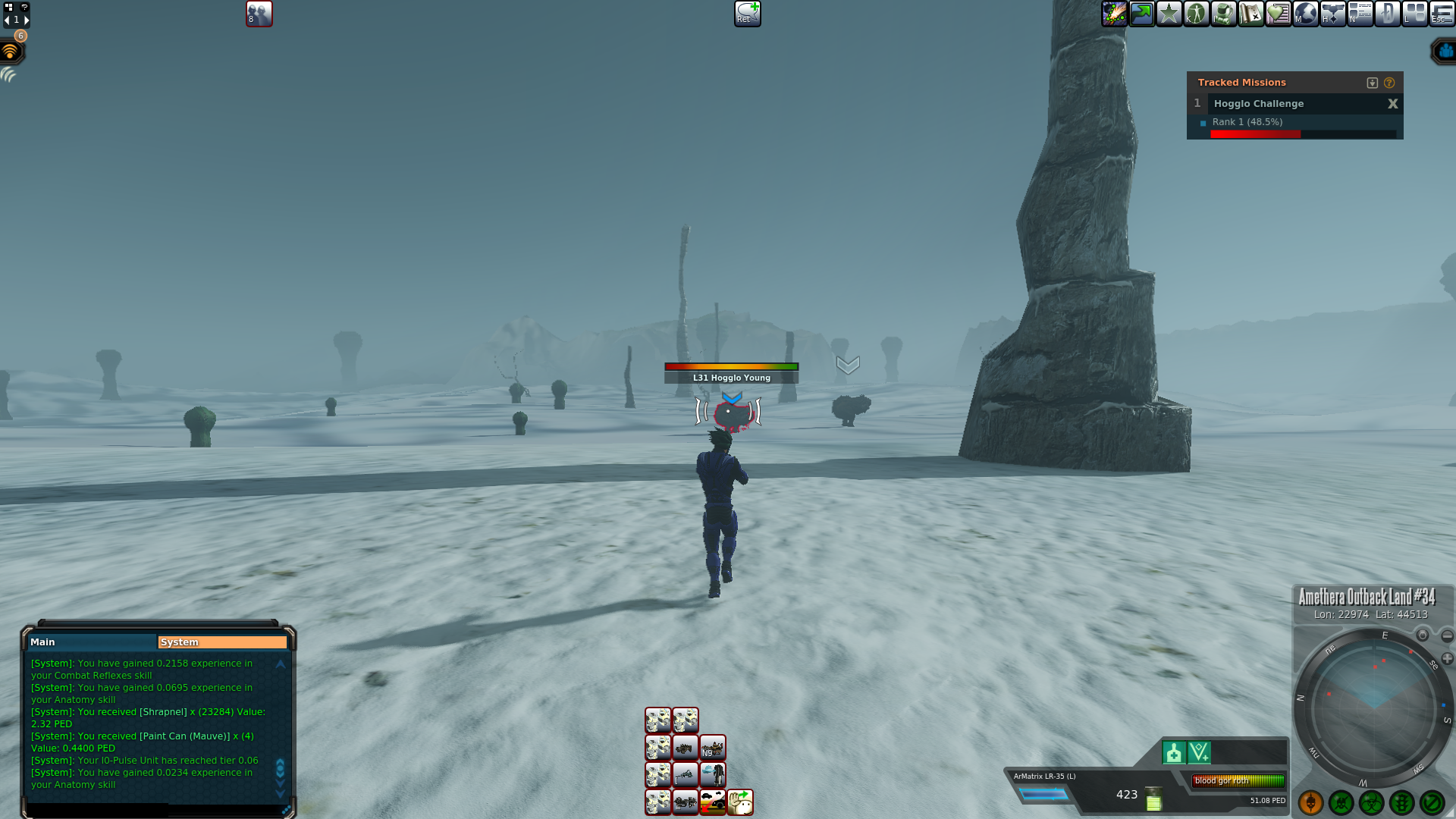 There were a couple of occasions where I was able to kill one without having to heal during the fight itself. That was however quite rare and often I would just have a tiny amount of health left that it could have gone either way.

While I did try to kill a Mature Hogglo it was able to kill me twice. Despite it only having 100 or so more health that a single critical hit from my gun would more than take care of it. The damage increased they do over the protection my gear provided along with my lack of healing just could not keep up.

It was also clear my evade skill was not high enough for fighting something like this with how often they were hitting me. I suspected that would be the case. This was however a hunt I just had to give a try.

In the past, if someone like me wanted to hunt something like this you would just go higher a player to be your healer. You can get to a point in this game where healing services tend to be required. I use to even heal as a way to make a couple of extra PED. This was however not an expense I wanted to add to my way of hunting without making it a much bigger hunting trip. With how much it was costing per kill around halfway through my hunt I started to get a bit concerned with how my loot was looking. I was expecting to take quite a hit from trying to hunt something like this. A 50% loss though that was going to be ugly. Even more so since I was using a lot of high markup items and burning a decent decay on them as well.

I also kept a little bit of PED on my card so I could make quick repairs to my gear any time I died at a repair terminal. When using UL gear the more decay it takes the less protection it provides. While that usually is not an issue for most hunts I do. I was going to need all the help I could get so I made sure to top it off. Towards the end of my hunt when I only had enough ammunition for three more kills at most I ended up getting a global. I was a tad too slow in getting the global swirly in the screenshot. I ended up looting an (L) gun and some other stuff for a total of 120 PED in loot.

Seeing a gun pop up in the loot window before noticing it’s nothing special can be quite exciting. While the gun I got was an (L) gun with not much markup. Some insane UL guns can drop here along with a lot of junky ones as well.

I’ve known people in the past who would hunt these things for months on end for the ultra-rare off chance that they would get a UL gun. While some of them are worth a decent amount it’s hard to say how much since those kinds of things don’t tend to trade on the auction house. There are not many suspected to have ever been found either from what data I know of. 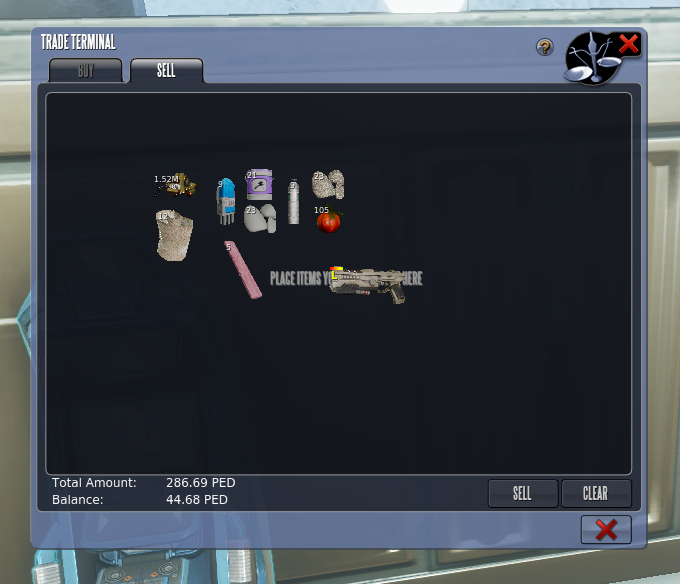 Getting that global at the end with the (L) gun in it was more than saving a hunt I was expecting to take a big loss on. As you can see I was even picking up fruit and stone that I found spawning on the ground while I was running around.

While I would expect a lot more decay on my armor and healing tools from hunting something a lot bigger than I usually do. After looking at the numbers it was clear fighting these were quite above me. The armor decay would be over 4 times higher than fighting something else with similar or even higher health. My healing decay was about 3 times as much under a similar situation.

There was also the fact that hunting anything larger than a Young Hogglo was certain death and I doubt I could go higher than a mature one if I had to. This is another clear sign for now not for me with the gear and skills I have.

It was however quite a lot of fun to do. I’m rather shocked I walked away ahead on this one after decay and other factors are taken into account. The skill gains were at least amazing. This however will not be something I’ll be fighting again any time soon.

The main point of fighting there was to see if they were my upper limit which it looks like they are. Thankfully what I have plans for going off-planet to hunt has less health and damage. Makes me think that trip could be a worthwhile adventure coming up soon.

I would rather get the Gremlin gloves I’m still missing before that trip. Even if I have to pay a higher price than I’ve been looking to avoid for the gloves. All my attempts to farm for the drop myself have failed as it seems I just can’t get them to drop.