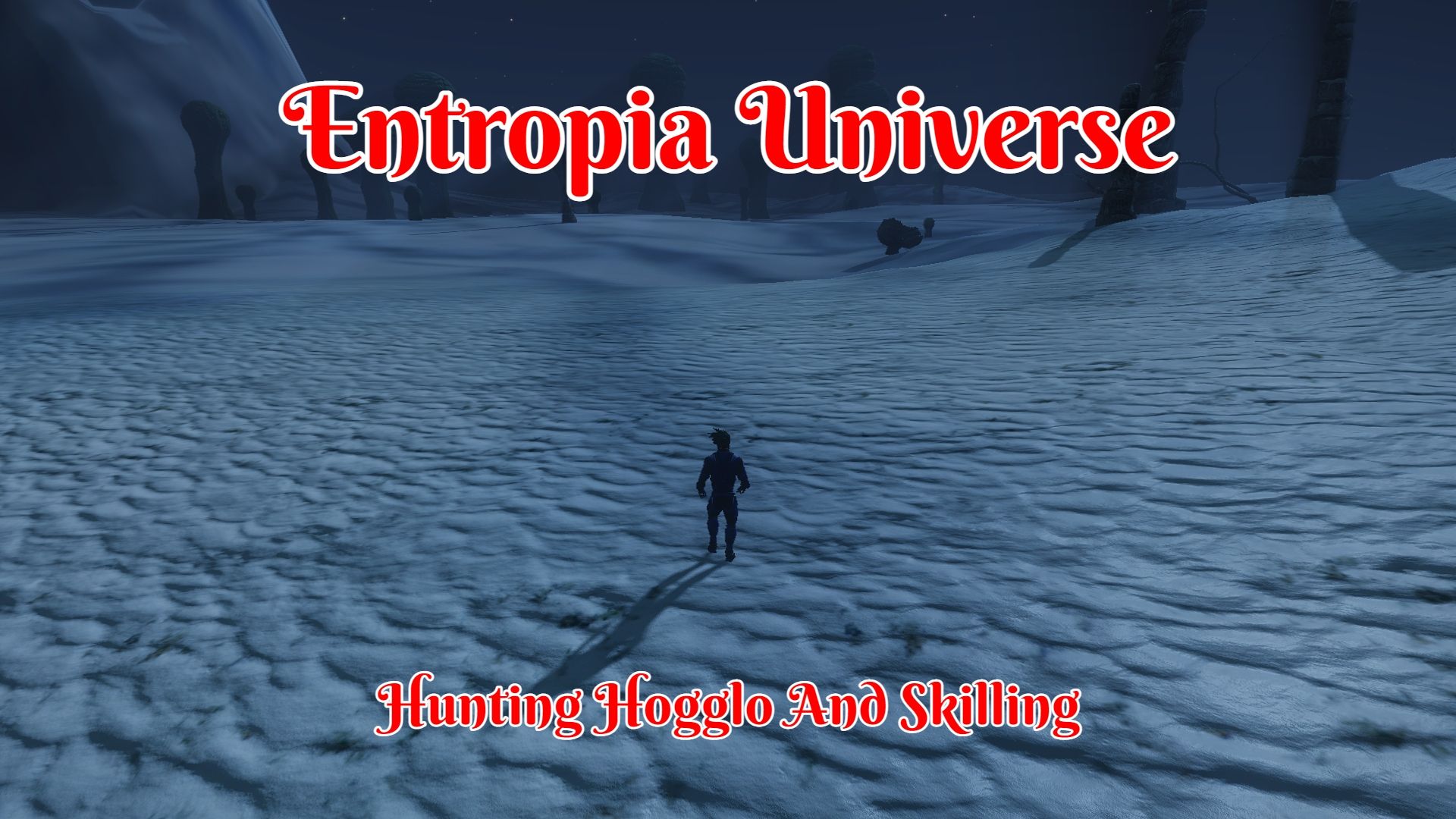 It’s not every day I find myself nearing unlocking a hidden skill. I also got some decent loot that has actual items with some markup as well. I was off again hunting Hogglo even though I should stay away from them. The skill gains are just too nice and they drop some long-term items I would not mind having either which I doubt I’ll ever see.

While I have done a couple of hunting cycles on them since writing my first post about Hogglo. This ended up being my second hunt on them. Many other runs were not that great. This one ended up being quite amazing.

One of the main reasons I’ve continued to hunt Hogglo is because of their high level and rather nice skill gains I get from hunting them. In Entropia Universe, you have what is called hidden skills. You can unlock those hidden skills when you have a certain skill reach the right level.

When it comes to unlocking some of the hidden skills for the evader profession most players will go out of their way to level up to something else for them. The reason unlocking hidden skills is important is because they tend to have a decent contribution to leveling up the professions they affect.

For instance evader profession has three different hidden skills you can unlock: Serendipity, Avoidance, and Combat Sense. In the first case, Serendipity is usually an easy one to unlock as there are 40 different skills including damage or hit professions reaching level 30 and you get it. Once you have it experience gained from it has a 5% in total influence on Evader. Which I’ve enjoyed for a while now.

With the way skill gaining works in Entropia Universe the first skill point was the easiest. The next skill points take a little more and so on. When you unlock a new skill such as a hidden skill you are starting at 1 for that skill. Meaning you can gain a lot of experience quickly having a huge impact on a profession.

Unlocking the avoidance skill in Entropia Universe is considered such a huge deal since it contributes 6% to the evader profession players usually go out and increase the captain skill to level 25 for it. That however I see as quite a lot of time and money spent on doing something I’m not that interested in doing (piloting while hunting in space if I recall). I find myself in quite an unusual situation. In that my evader profession is now at level 24. While it will be quite a grind before me to get there. Thanks to doing things like Codex and hunting some bigger creatures I can eventually get evader to level 25 for the avoidance unlock the “natural” way. The codex rewards for Hogglo such as the 1.25 PED of athletics I got have an effect of 14% on the evader profession.

The next few rewards I got from codex were even better than I would get on further hunts. After doing some math I realized another codex I could be doing for some decent skill gains as well would cost a lot more PED to be cycled to reach the next level.

While I do have all sorts of creatures I have not even gained any codex levels yet for. Many of their rewards combined I doubt would even come close to just a single codex rank increase for Hogglo for me. These things seem to be a decent deal and one I’m willing to take advantage of till I get to a certain point it’s not anymore. Then I’ll focus on other things.

Hunting Hogglo can get me some decently large evade skill gains along with a lot of other things that affect the evader profession. It also turns out the loot has been quite kind to me. I would expect hunting something this big to be quite brutal. Even on my bad runs, they have not been as bad as my Rextelum runs which I consider to be a blessing and I would hope is not possible. Rextelum seems to be the death of me. 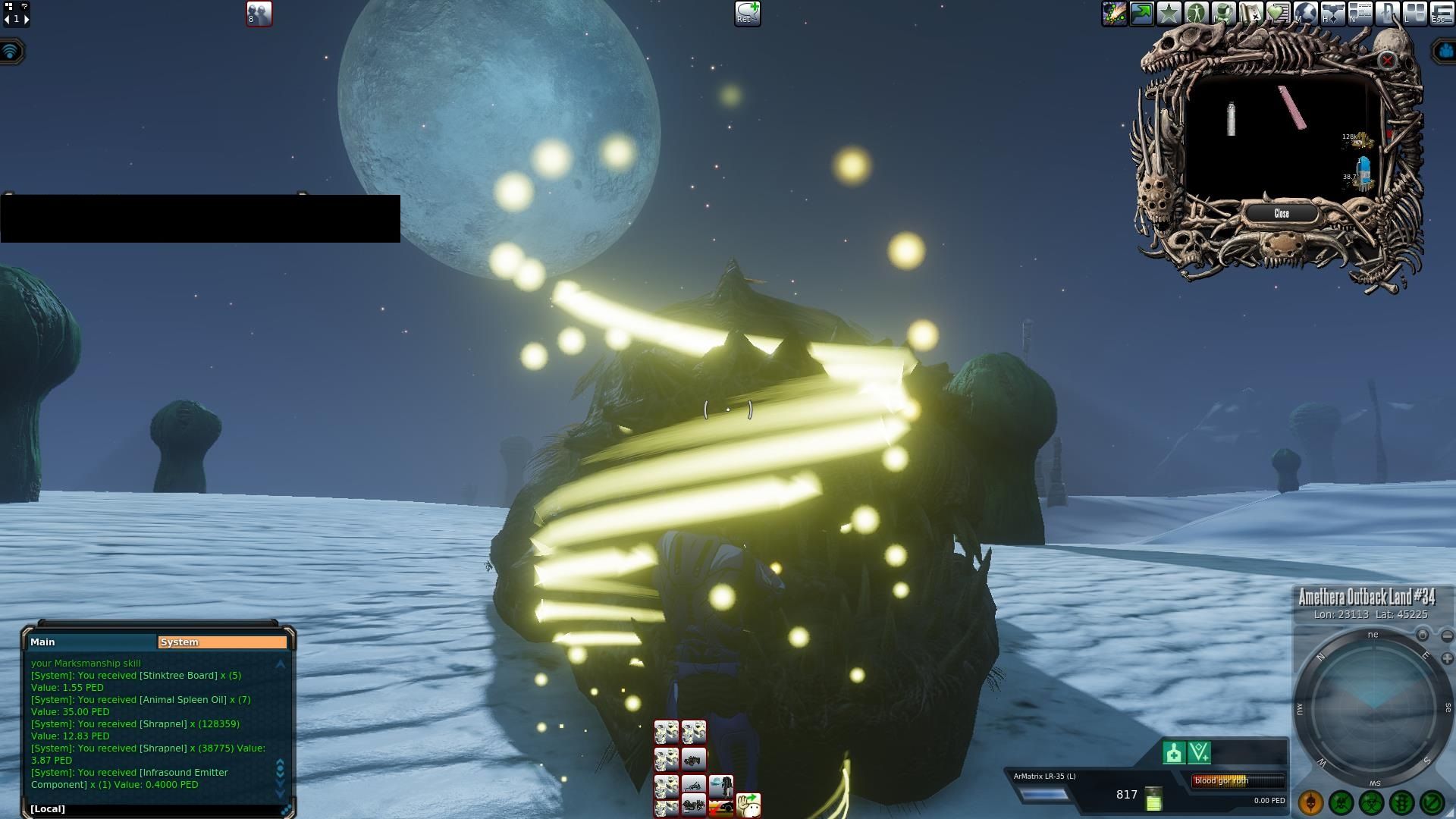 During my second trip, I ended up getting this little global of 53 PED. While nothing special that right there could have been all I needed to almost break even on the rest of the hunting trip if things did not go poorly. It was also decently early in the trip so I was quite hopeful this was the start of something. 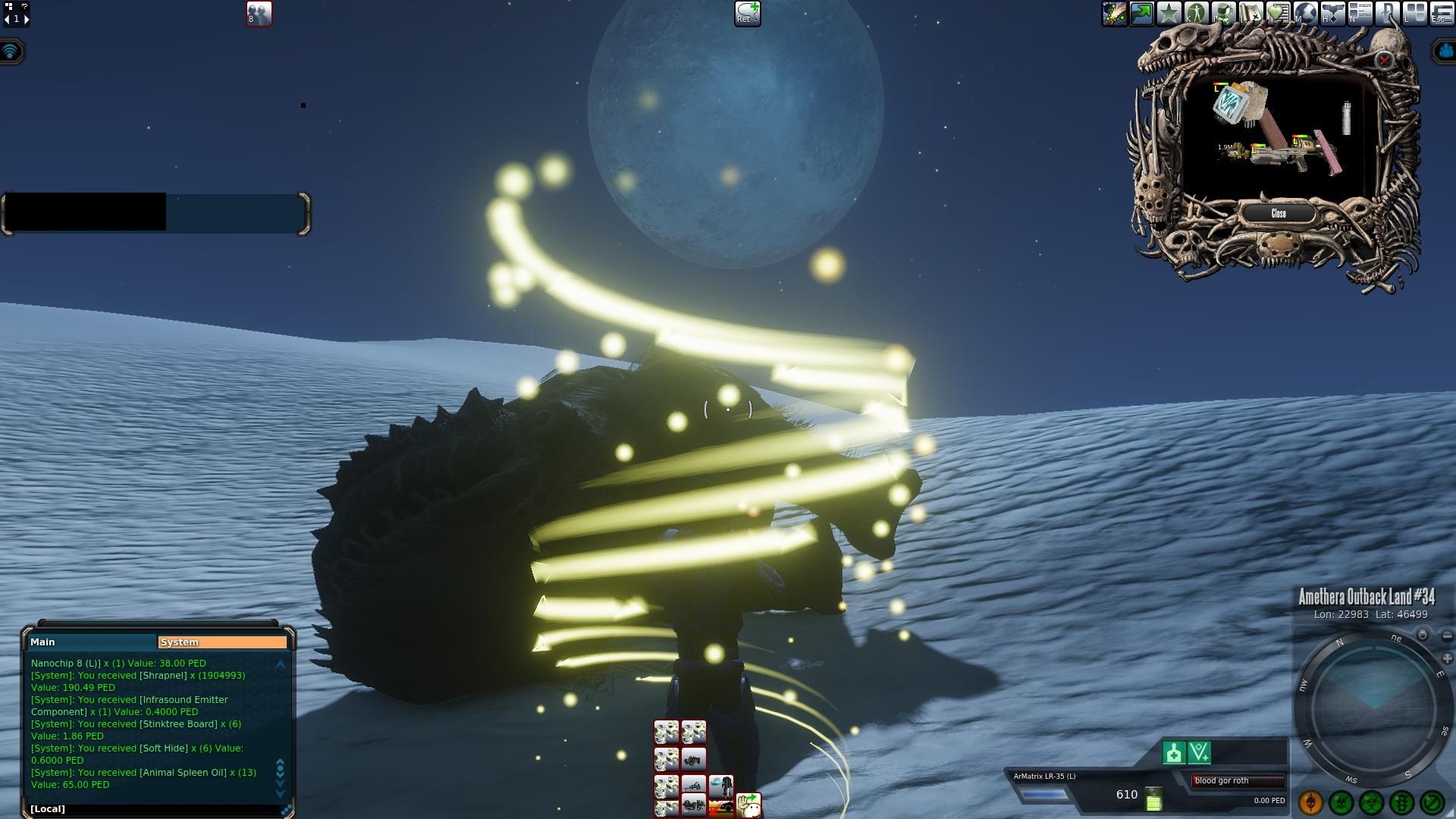 Later on, almost getting killed before I took out the Hogglo I got this thing of beauty. While the two weapons and one chip were (L) items. They dropped full TT (trade terminal) and had some markup on them. They even sold within the first five days of listing them up on auction.

I don’t usually see multiple items dropping when I get a 491 PED global. At most you might expect one item to drop and even then more times than not it was shrapnel that was the bulk of the drop. Leaving the (L) item you got to be a low percentage of its total and sometimes hard to sell.

It’s almost a shame so many items dropped from that single kill you can’t see it all in the chat window. You just see the 190 PED worth of shrapnel, 65 of Animal Spleen oil, and some other lower stuff. Someone else also got a global right before me so my name was not even in the ticker at the time of getting the swirls. I gladly waited to get a second screenshot.

I was tempted to call the hunt early. I really could not see myself getting much else. I also never see people global on this land I picked that has zero tax on it. Since I was however here for the skill gains and codex grind I finished off the rest of that run. The loot was as expected boring. 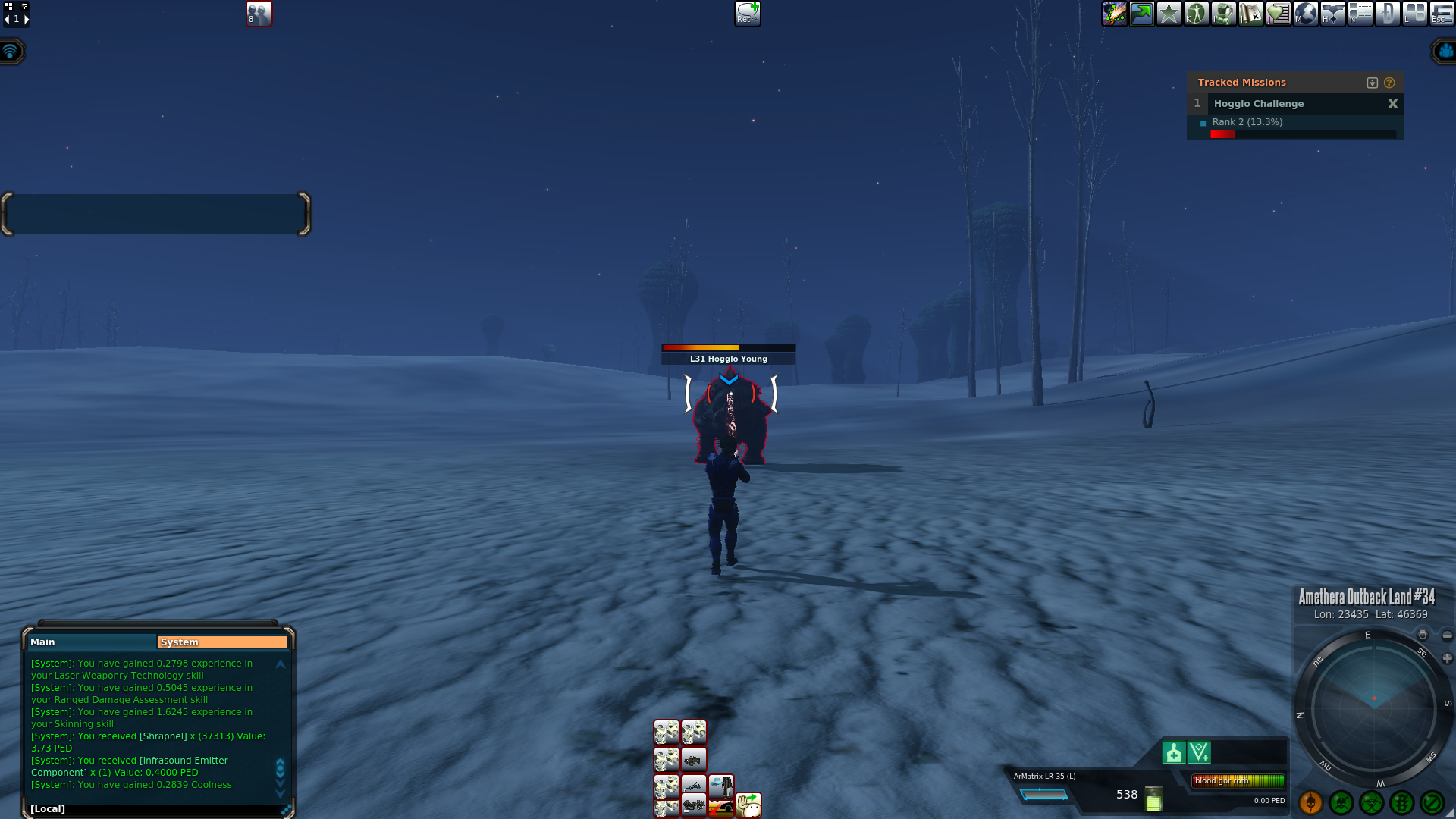 I ended that hunt up over 200% on the run after markup was included among other things. While I would go on to take some losses on further hunts on Hogglo. Between the first two hunts I had, they more than made up for them.

I might even consider doing further hunts on them in the future as I slowly grind for Evader 25. I know it’s going to take a while but unlocking avoidance is quite a huge deal. For now, though there are other opportunities for grinding forward that I’m working on.