I have scouted quite a lot of locations trying to find a decent and high-level spot for Faucervix. That has been mostly unsuccessful so I ended up returning to one location I had found a little while back. Faucervix was however not ordinarily on the menu for the day as I went out for more Merp.

With hunting in Entropia Universe, you are going to have a lot of downs where you hope the ups will more than make up for it. While Merp has not been that dreadful to hunt till this point. This time around that was going to change. I am somewhat shocked the hunt went as poorly as it did. One of the Berycled I took out even gave me a little 11 PED global. It’s a shame it was all just shrapnel as some of the higher uncommon loot I get from my hunts in this area with some markup end up coming from them. One of the Sabakuma Dominant I ended up clearing out of my way ended up even globaling. While 10 PED is not much that more than likely covered my lifetime of hunting costs on these things. I have killed so few of them and they have so little health it was not that hard to do.

That was however the extent of the run. The Merp was not having it. I’m sure they are tired of seeing me day after day after day. I ended up being down 12.8% after ammo and decay are considered. That does not include any markup of items looted since they have not sold yet, but, there is not much there to try and save this hunt.

While there are creatures I’ve hunted that have much higher losses per run and higher-ups if things end up going well. This hunt was down more than all of my other Merp hunts combined if I’m not mistaken.

The good news is I’m not at a point where I’m so in the red that if I get what I want to drop that item is worth enough to still cover these losses. for now a least. There are many other items as well that could drop that can more than make up for things.

I however felt it was time to switch to another creature that supposedly can drop one of the pieces of gear that I’m after. I’ll also be taking a bit of a break from hunting Merp.

A lot of times when I see anyone farming Faucervix it’s in front of Atlas Haven. Were the spawn just young maturity and they are so far spread out I wonder what the point of even bothering with it is. The kill rate per hour is going to blow. One spot of Faucervix I did check out that I decided I would give a try despite it looking like a pain of a spot to deal with. The first time I had scouted it outside of just one higher maturity Faucervix it was all just lower-level ones.

While the young are quite prevalent in the area. There is a chance that a much higher maturity Faucervix will spawn in its place after you clear out the area. There are quite some interesting things going on within the ecosystem of this place. That you don’t tend to see anywhere else in the game. 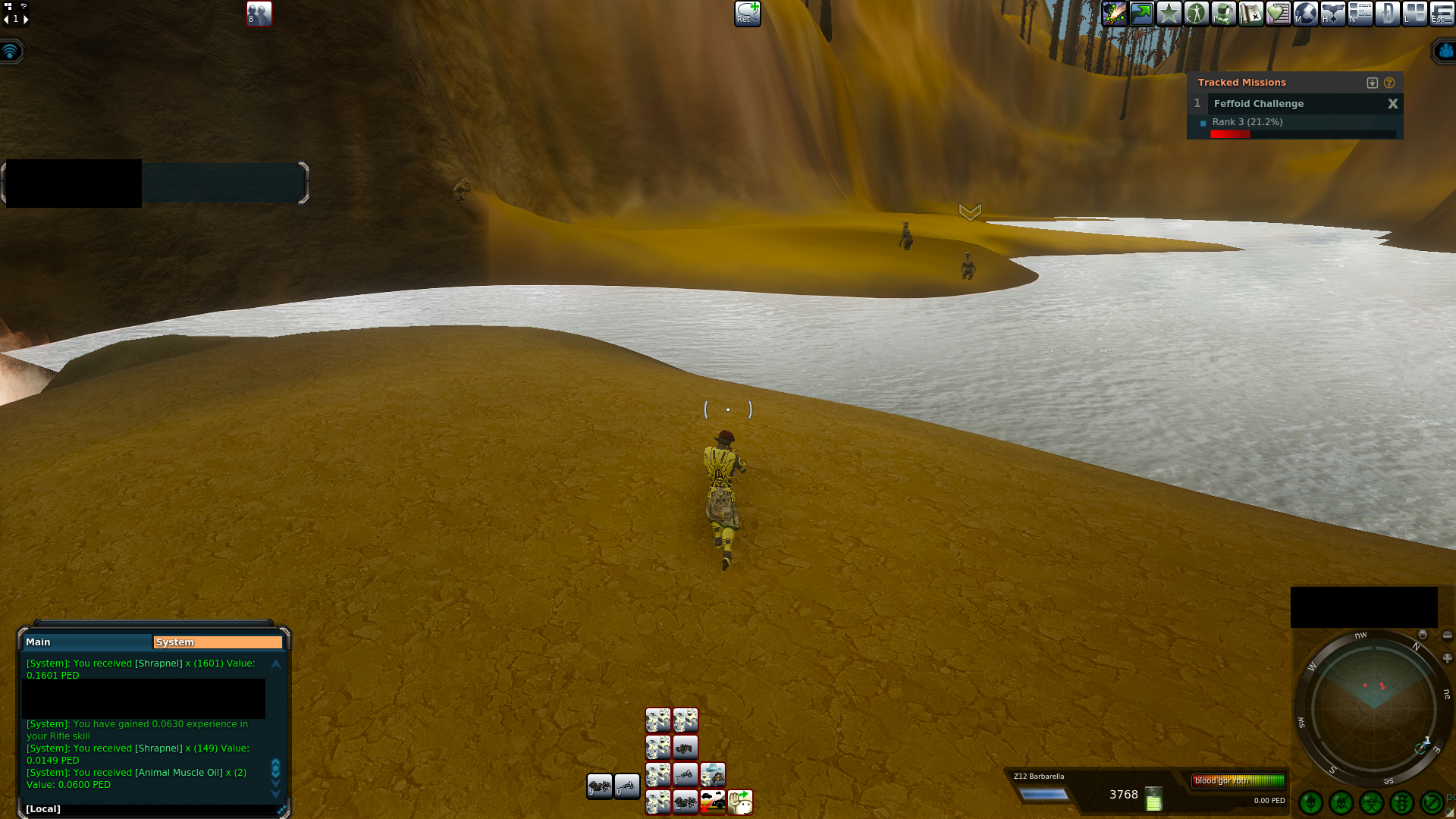 The water also adds another layer of things to watch out for. If you shoot at something in the water or bring it from one side to another there is a chance the game will instantly kill it.

Using water to kill land creatures can have its benefits in certain situations if you are in trouble and don’t care for the loot. In this instance, it’s just quite annoying to have to deal with. A lot of times I have to either wait for a Faucervix to get out of the water to attack me or I have to run into a group of them to avoid them running into the water.

Faucervix also moves around quite a lot all on their own. Over a long period, they will wander off the cliffs and waterfalls down to the lower sections. They then will wander into the water and drowned. This means you have to act with a certain element of speed if you find a higher maturity spawn and you don’t want to risk losing it. These hills are steep enough that you do need to fly between each level. I did try jumping a couple of times and died a couple of times. This makes this place a bit of a pain. As you are constantly clearing out an area, having to spawn something to fly. Then enter into an area that can have a high density of Faucervix. I did rack up some armor repair bills on this hunt. One I was a bit overprotected with the gear I'm wearing. The other is breaking into a new area you would often get a few Faucervix on you at once.

There is also an area of Merp and they seem to love joining in when trying to clear out Faucervix since they have a bit of a bigger aggression range. Sadly the Merp were all young in this area or that would have been interesting to set up a farming area where I could just stay and farm both creatures. The most interesting drop I ended up getting during this hunt was a Regeneration Chip 1 (L). While they do sell with a bit of a markup it having less than 3 PED of value meant I would not be putting it up for auction. I also don’t use mind force so having a chip has zero use for me.

It was however nice to see something like that drop. It has been quite some time since I even had any kind of chip being attacked, healing, or another drop. While it was not what I was looking for it was the least something a bit different than the normal stuff like Animal Muscle Oil.

During this portion of the hunt, I was up 1.4% not including markup on what I looted. While that is not even close to digging me out of the hole during the first portion of hunting Merp. At least I got to end the day on a positive note. After this hunt was over I noticed I started to have some stacks of loot that I’d been holding onto for a few days that were worth trying to sell at the auction house. Ideally, I would hold off even longer selling an even larger stack. Having the auction house fee not eat up so much of the markup.

I however needed some further liquidity. In my first couple of months back in Entropia Universe I’ll need to be making some investments into armor and other things which will be eating up a lot of my budget. Once I have acquired what I need I’ll be able to hold onto things a bit longer and try to get more markup off things I’m currently not. While the Faucervix spot I ended up hunting at is not the most ideal. It is a lot better than other locations that I have found. It looks like my search for an area that has a decent density and a higher maturity of them is still unfinished.