Since I can’t seem to get the Gremlin gloves I want to drop. I thought I would try and get the pair that was up for auction. The auction had been set for a week. It was now down to the last moments when a massive bidding war broke out.

Thought-out the week around a dozen or so players but down a bit. People usually do that as a placeholder so they know when they get out bided and can look up that item faster on the auction house. You can also sometimes luck out and not have any bidders. That however was not one of those instances.

Players can list items for a range of prices from having a min amount the item can sell for to having a buyout price. The gloves themselves did not have a buyout price. They also tend to be the highest costing piece of the set I’m trying to gather to use for some bigger hunts.

The funny thing is they are the highest costing piece for the male set of armor. In female armor, you could almost buy the entire set as far as the markup part is considered for the price of these gloves. This is why I’m trying to farm my own since there is a chance it could be worthwhile which has yet to be seen.

If I do end up getting the gloves to drop at some point if I keep trying to farm them I’ll be a bit devastated if they end up being the female version. It’s a shame you just can’t get an armor extender out and a hammer and make them fit! This game and its oddity of having items be gender-specific gear. This is why some play as female characters for cheaper gear. That works till it does not. 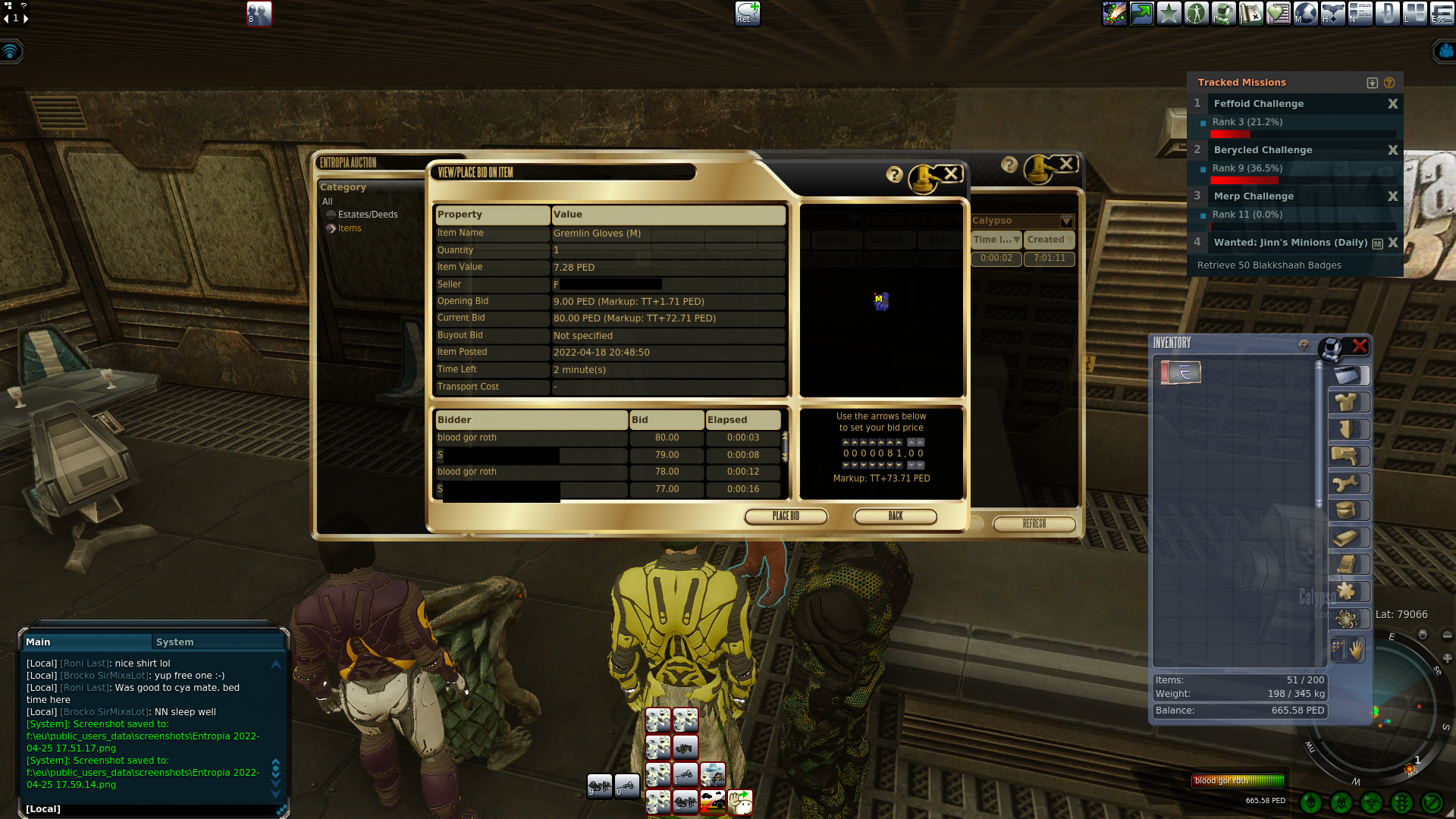 This tends to cause bidding wars if people want an item. While a lot of the bidders dropped out early on it came down to me and one other person. Well over an hour after the auction was supposed to be over we were still fighting it out.

The bidder I was against was using a rather standard tactic. They would wait till the last possible moment and then place a bid down. In the past, some people have been known to use a stopwatch to plan their bidding times perfectly.

There have also been people in the past who messed up bidding at the last moment and ended up losing massive items that sold quite an under-market value. I don’t deploy such tactics to such a degree. I also don’t want to risk a lost connection just trying to wait down the timer.

At most I’ll wait around 4 minutes and a few seconds before I put another bid in. Either way, most people wait so long to bid to try and drive up the time of the auction hoping the other player went off to do other things and can’t make it back in time.

There also have been instances where bid wars have lasted around a day or longer from the stories I’ve heard. I have never been in such a bidding war myself and hope I never will be. Many times someone runs out of time to sit there bidding and the other person wins not because of the price but because no one had enough time to sit there that wanted the item.

For myself, I tend to use two different tactics if I’m not trying to drag out the auction time. They both involve switching things up a bit on the other bidder.

A lot of times in bidding wars the price is just increasing by plus 1 PED for each bid. A sudden price jump can sometimes cause the other person to think too long if the price is still worth it. It can also signal to the other bidders that you don’t care about getting the item at a discount you are here to win.

Before any bidding war, I set a hardline price. As it is not uncommon for people to way overbid just so they can win in a bidding war. While I want this item it’s not an I need it now kind of thing.

The other players did not change their bidding intervolves in the slightest. It can be hard to guess with there being a nearly five-minute window if there was any impact on their thought process.

Knowing this is how some players think I have taken advantage of that in the past. I’ll refresh the auction listing quickly right around when I’m expecting them to outbid me. I’ll then slap another bid down right after.

I had been playing it cool for quite a few bids. Waiting till less than a minute left if I was not the winning bid before placing down another one. A sudden change in bidding time like this should have been unexpected. If it fails then I’ll bid at normal intervolves again or a while before picking a new random number within a one to three-minute range.

Sometimes if a player is not managing their alerts when they get out bided that it occurred they might not notice they just got out bided. If they go away for more than five minutes thinking they got the time I win.

That ended up not being the case. Right on time, the other player put down yet another bid. After driving up the price quite a lot. I decided we got to a price point where I’d rather try my chances the next time these gloves pop up on auction.

I also plan on hunting more creatures that appear to drop the gloves anyways. I want to grind up their codex ranking a bit more for more skill gains from that. They are also lower-level creatures so I can get a few hours of enjoyment out of them per hunting trip. Not to mention other things could drop that I would not mind having either. While I did not win the gloves this time around. I still don’t need a full set of gremlin armor just yet anyway. I still need two other pieces besides the gloves. At some point though I’ll be at a point where I want to have a full set to go off and hunt want I need the armor for.

I do hope that if more gloves end up on auction without a buyout I don’t see the same player again bidding on them. I do hope they needed the item. They still got it at a discount over the last few month’s prices and the highway robbery price people are trying to sell off auction I’m not paying. If they show up again bidding on these gloves I’ll have to question what motive they have for doing so.