This marks the end of the hunting trip I took up to Crystal Palace Space Station in Entropia Universe. In total, I spent around two weeks up there. Most days I’d log in at least once or twice and get a round of hunting on Aurli for the most part. My guns, money, and ammo supplies were getting low. While I had an amounting pile of loot it was not exactly what I was hoping for. It was time to do a few final runs before heading back down to planet Calypso.

These last few hunting rounds could make or break the entire trip. I had quite that middle slump to get over. I’m not exactly sure how far I’m down since markup on items has not been accounted for yet. Since I can’t tell the items up here and expect people to buy them. It could get quite ugly. Uglier than my Easter Mayhem 2022 run. I was in quite the hole I’ve been digging myself into.

On my next run out I hit a 119 PED global from killing a watcher. It was also early enough in the hunt that I had some high hopes this run was going to be the one. The loot however fizzled out quickly from there. While sometimes you swear you would have been better off taking a break. You never really know till it’s over.

While I was only up 9.78% for that run. Since it was on the heels of some amazing runs I just had I was not that disappointed by it. It’s just a shame nothing with a lot of markups ended up dropping that run. 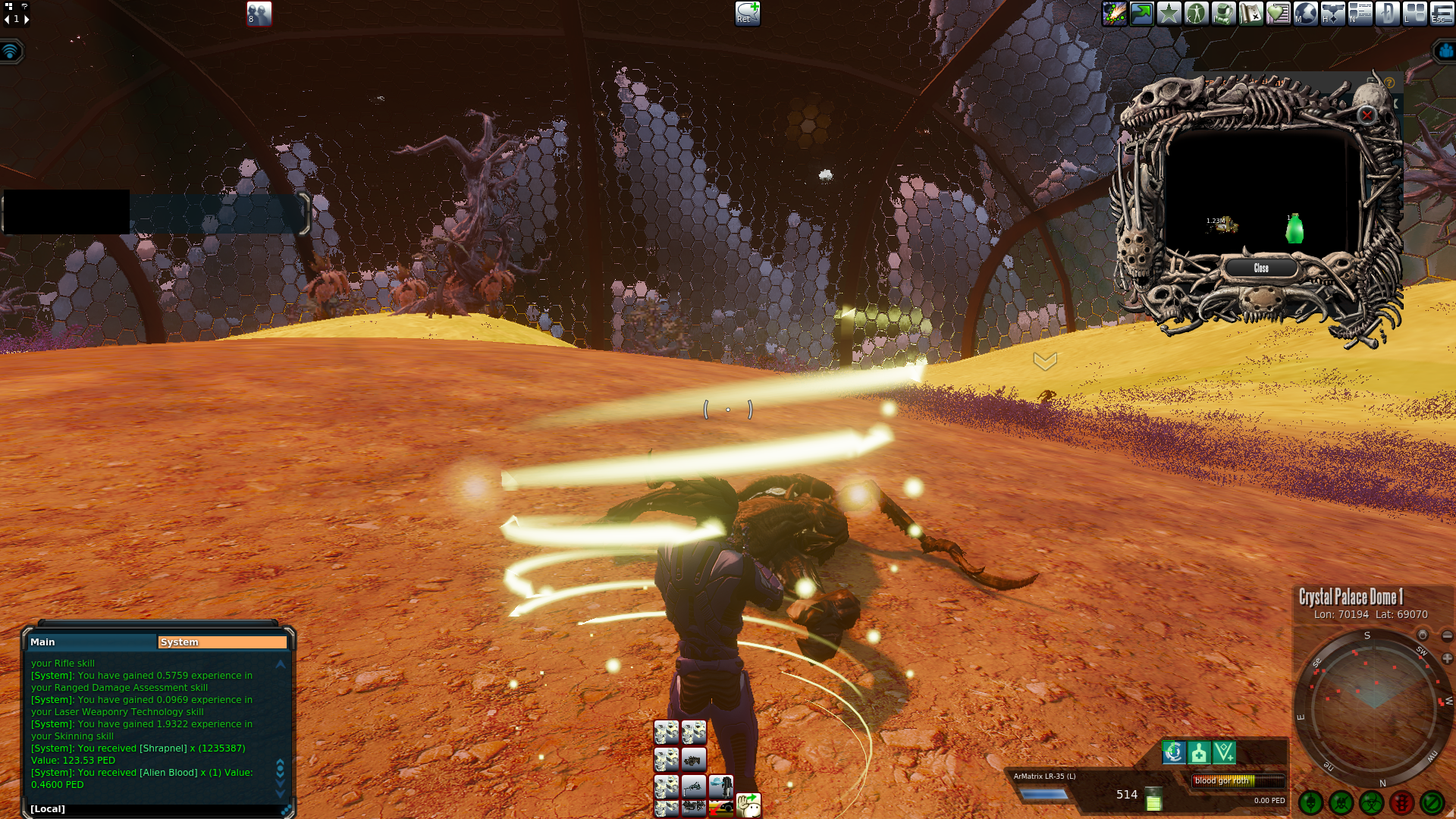 The run after that I got another global. While I was a bit disappointed 123.53 of the 123.99 drops was Shrapnel. At this point in the hunt, I was getting low on universal ammo, and my stack of Shrapnel to convert into ammo for 101% was getting small every trip out.

I ended up breaking even on the ammo part of that hunt. With a little loot leftover to slightly be up 12.7%. Again nothing that great in terms of drops with the markup on them. At least I was coming away ahead on these hunts.

I would soon discover just how brutal Aurli can be. I thought the rut I was stuck in before that slapped me across the face was bad till these hunts. In my next few hunts, I would be down by 37.3%, 30%, 44.74%, 42.8%, and 41.97% concerning the cost of each of those hunting runs. The only thing worse was the low markup loot I acquired.

Things were looking bad. I had about a gun and a half left to burn and I could barely scrape enough ammo by to get one final hunt in. I was tempted to just pack up and teleport down to the planet and forget this place ever happened to me.

There was just one small part of me that could not let that go. I was within range of finishing my rank 6 codex for Aurli. I wanted that 7.65 PED of Athletics. I figured based on how much it would cost to buy that much of the player auction even if it ended up being yet another horrible run the skill gains would at least be worth it from getting that codex reward. I did not even make it far from the teleport on my last hunt of Aurli before I got a global and it was an ok one as well. Even better it dropped two Aurli Bone Pieces. I had looted so few of these during this entire time I was shocked I even got two at all.

I would later during this hunt get a third Aurli Bone. Making this single round account for 60% of the Aurli Bone Pieces I had found. This makes me feel like I either had a lot of luck this hunt or I was just unlucky as heck during all my other runs up here.

While this run would leave me with enough Shrapnel to make another run at it. I had already decided this would be my last run up here at least for now. I had a bunch of loot I wanted to sell and that could take a week or longer to offload a large chunk of it. A couple of kills later I got another global. This time in it there was a limited gun. Like all (L) guns it can’t be repaired and it did not drop with most of its value. The markup was 107% on them but a very low sell volume. I’ll put the gun up for sale once at the auction house and if it fails to sell I’ll just vendor it. Auction fees are already going cut into the profit I could be getting on it anyways. Not long after I finished off my rank 6 codexes for Aurli. This is the last thing I wanted to do before getting off this station. It was also oddly enough when I got my 3rd and final Aurli bone Piece drop from this hunting trip. Finishing a codex seems to bring me good luck.

During the remaining of my final hunt, I had the idea in the back of my head that I would get one final global to send me back on not-so-bad footing. That however never happened. The loot quickly turned into the trash and I did not need any further convincing it was time to get out.

That final hunt I ended up being up for 203% of that hunts cost. I ended up bailing out just a tad early otherwise I suspect that amount up would be a bit lower. I did not exactly have enough universal ammo to cover the last trip so I bought some normal ammo off the vender.

I decided since I had circled back around to the teleporter out of the dome that was my sign to leave. I had burned up the last of my universe ammo for the most part. I could also sell the ammo I bought off the vender back for the amount I bought it for.

That last hunt ended up covering the losses of the last 2 before it and then a little extra. Things could have gotten quite ugly in the end without it. I am however glad I went for it.

While I was kind of hoping I would have hunted enough to break all five of the ArMatrix LR-35(L) guns I had brought up with me. Seeing how fast things could go from bad to worse I’m glad I lasted as long as I did. I also had no idea how many guns I would need I just wanted to have enough so I did not have to go get more.

I almost broke my limited healing device as well. While I did bring a second one up with me it turns out I was not going to need it. I was expecting to have to heal a lot more during combat than I ended up doing for this total trip. This is great to know for next time.

For me, this was quite the extended hunting trip being up here for around two weeks. That is however nothing compared to what the uber players in this game tend to do. I think one of them has been up here clearing the cave for possibly months now daily.

While I am a little disappointed I did not start the Access Crystal Palace Cave mission sooner since I did not know I needed to do so. I at least gained some progress on it during my time. I don’t think I’m even 10% into it as of yet. Unlocking that cave is going to require a lot of trips up here if I ever end up finishing it at all.

While I’ll be adding access to the Aurli Cave to my long-term goals for the game. I feel I need at least a slightly higher damage weapon to help combat all the life regen the Aurli have. For that I’m going to require a lot more weapon skills and that alone could take a few months.