I ended up going on quite the dry steak of a rut on Aurli. Even worse I discovered there is a mission I wish I had started before had on them. At least I’m mostly up here for the experience of hunting these and for some nice skill gains.

I have now completed 14 separate runs of my normal hunt on Aurli. Outside of the first two runs I had done on them, they were all losses. That was at least till my latest two runs on them. While they were not massive gains by any means. It at least put a dent in the hole I was digging myself into.

I do expect a creature like Aurli to have some wild swings in the loot while hunting them. A lot of what is considered to be their “common” and uncommon” loot all on their own could result in getting a global.

One of the things that I brought up with me to use is skill increase pills. I have a decent stockpile of them and since I won’t be farming something any harder than these I thought it would be the perfect opportunity to use them up.

The best ones I have increased skill gains by 50% for one hour per pill. I also have some much smaller ones that give a 10% increase for an hour. In total, I have about 80 hours’ worth of skill pills to use while I’m up here on the station.

While that is a whole lot of hunting I doubt they will last long enough to see me to the end of hunting these. I’ll need to be killing quite a few of these to work on some things. Not to mention to get a real understanding of their loot in general.

One thing I’m a bit disappointed I did not fully understand better and research further is the Aurli cave. Back when they had iron missions completing the 5k kill one granted you access. Since I never did that but heard people were getting credit when they hit 5k kills. I had assumed that I did not need to do anything else.

I was wrong in the assumption. Just out of wondering one night where the entrance to the cave was I went out looking for it. After I tried to enter and it not permitting it I got an option to pick up a mission for 5k Aurli kills.

My best guess is just in ammo alone not including armor and gun decay it would take about 32,500 PED worth of ammo to kill 5k Aurli. So what the heck is so special about this cave? As you can imagen only the top players in the game are ever going to have access to that area of the station.

The main reason for having access to the cave is there are special kinds of Aurli there. They are harder to kill and their drops are quite unknown to the public. There is very little information to the public outside of that they can drop quite a nice healing device inside among many other items like a weapon amplifier.

They also drop ingredients used in crafting that required a lot of different parts from Aurli. A lot of those parts have some decent markup on them as you can imagen. Outside of that information, I couldn't gather any further information as I don’t know many who still playing that even have access to the cave let alone have grinded it in for a long time.

I am not even sure if I ever will either. It is however something I wish I had started the mission for before killing any of these. At least I now have it started before I get too crazy into hunting these. All I do know is it will take many trips up here to even get close.

I have also gained a decent amount of skills from finishing Codex. If I wanted to buy the skills from other players for what I have selected it would have cost me 86 PED so far. I’m also close to finishing off another which I’ll be getting a nice little chunk of evade skill.

While this by no means even comes close to helping cover my losses while up here. It does help somewhat. Although I have had no plans of selling my skills for quite some time. Skills also quite experience to chip out and most of those costs would eat away at how much value they add to my character for doing so. 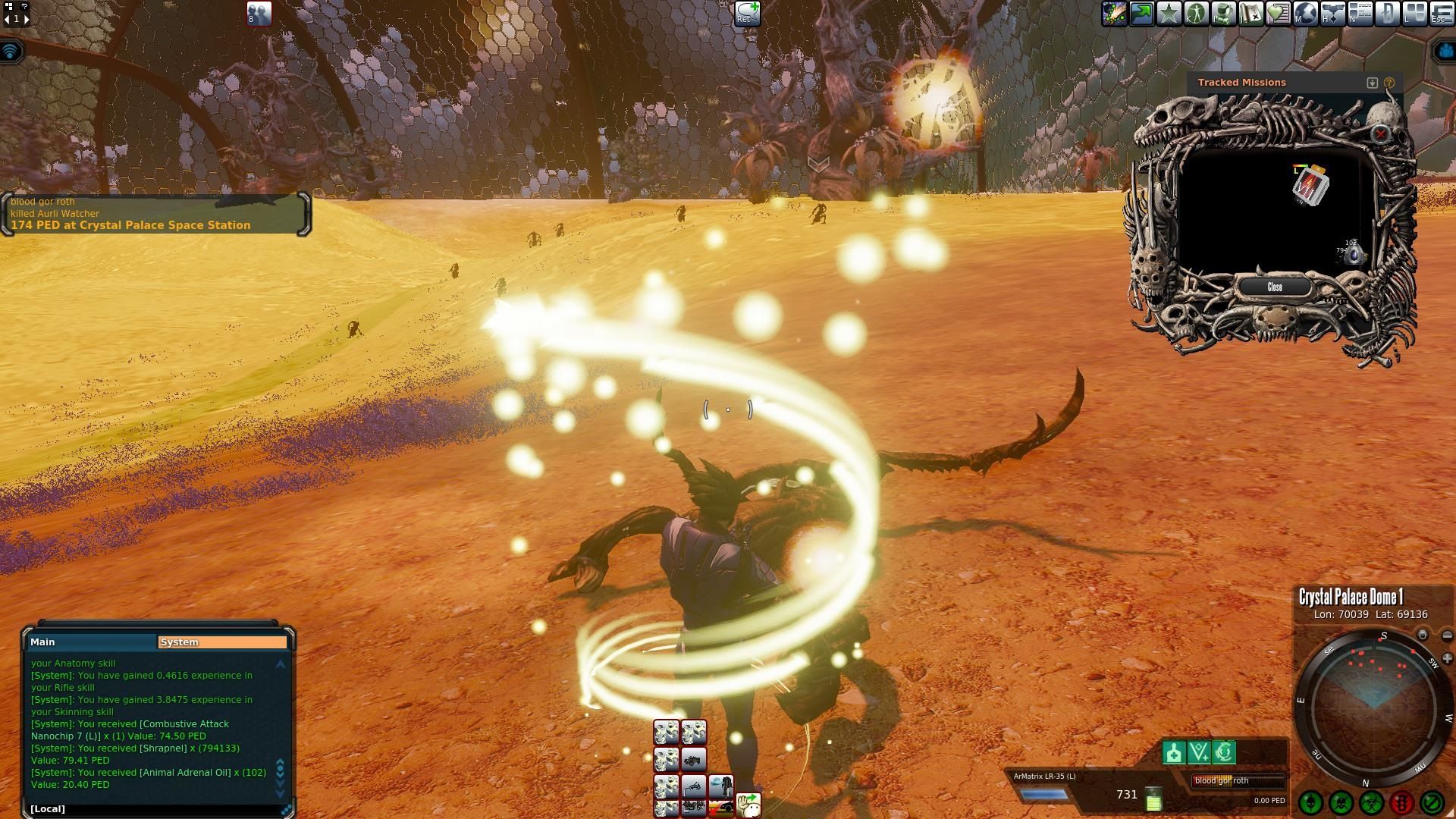 In a 174 PED global I got during one of my hunts there was a Combustive Attack Nanochip 7 (L) that dropped. While it dropped full TT (trade terminal) value it only has about a 107% markup on it. With a very low volume moving per week.

It was at least nice to see some different kinds of loot dropping. It’s a shame the UL (unlimited) version did not end up dropping. While I doubt it sells for insane amounts it would have more than covered my hunting costs and allowed me to keep hunting for quite a few more rounds up here.

A little while later I had a 60 PED global. Nothing special but a fair amount of Animal Adrenal Oil ended up dropping. While the markup is not great on the stuff. I’m at least amassing a decent stack to bring down from the station onto the planet at some point to sell. A fair bit later I then had a 173 PED global of mostly Shrapnel. The Aurli fangs that dropped lack any selling volume and are more than likely just TT fodder but I’ll double-check. The shrapnel I’ll be converting into ammo. That run more than covered the ammo spent jus in shrapnel drops.

I did however have much higher hopes for that last global. So many (L) items could have dropped in its place. It was however quite needed and I won’t have to sit on it trying to sell it. This for the short term is a plus.

During my hunts, I have also been getting a very small amount of bones, skin, and some other decent markup items. They however have been in quite small quantities. I was a bit more hopeful it would have been more by now. The markup will at least help in recovering some of my losses so far. They just don’t seem to drop on most runs. 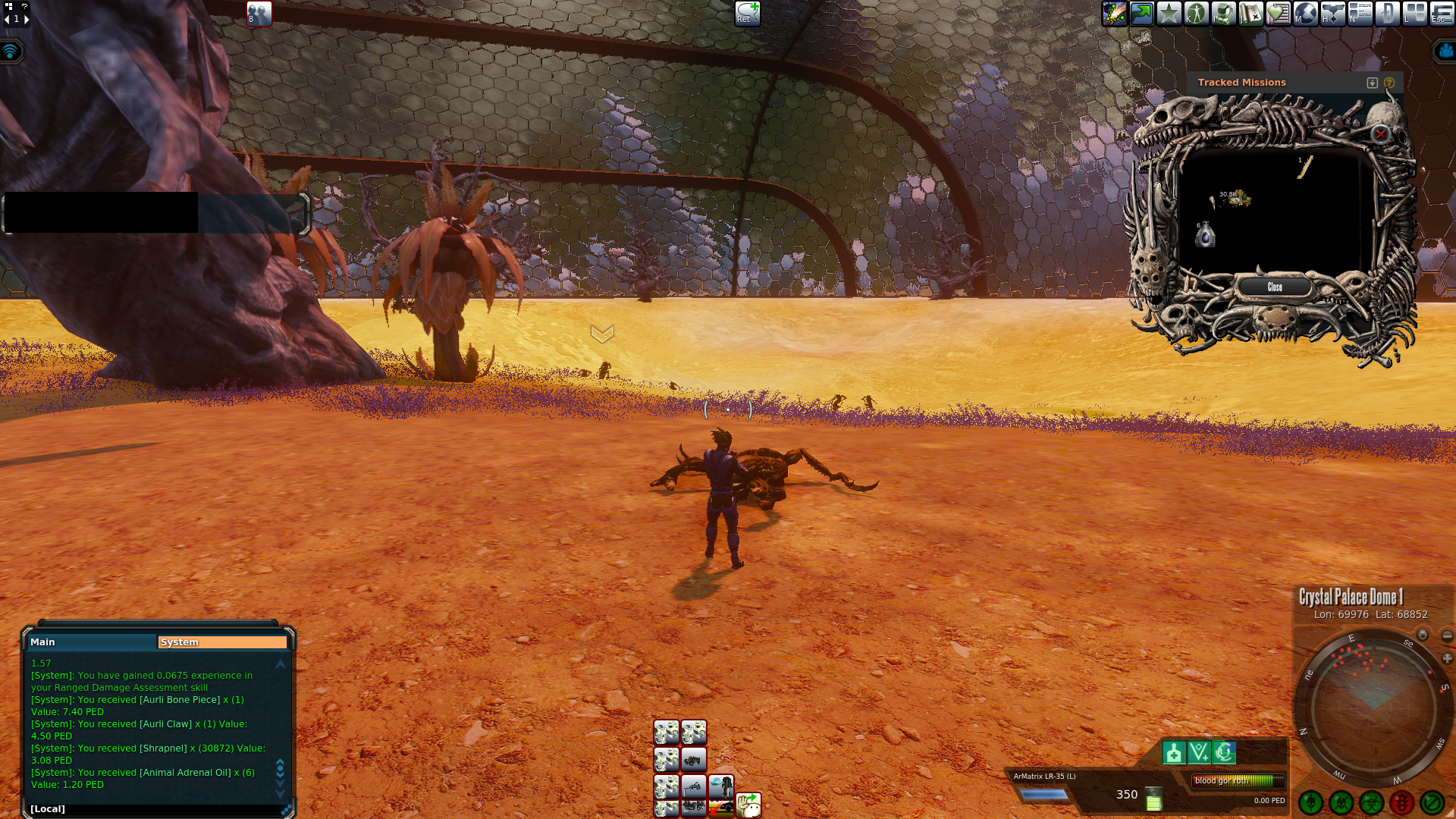 It was at least nice to get some decent hunts in. Going for a prolonged amount of time without much of anything can suck. At least I have been gaining quite a lot of skill gains while up on the Crystal Palace station from codex and using 50% increase skill gain pills.