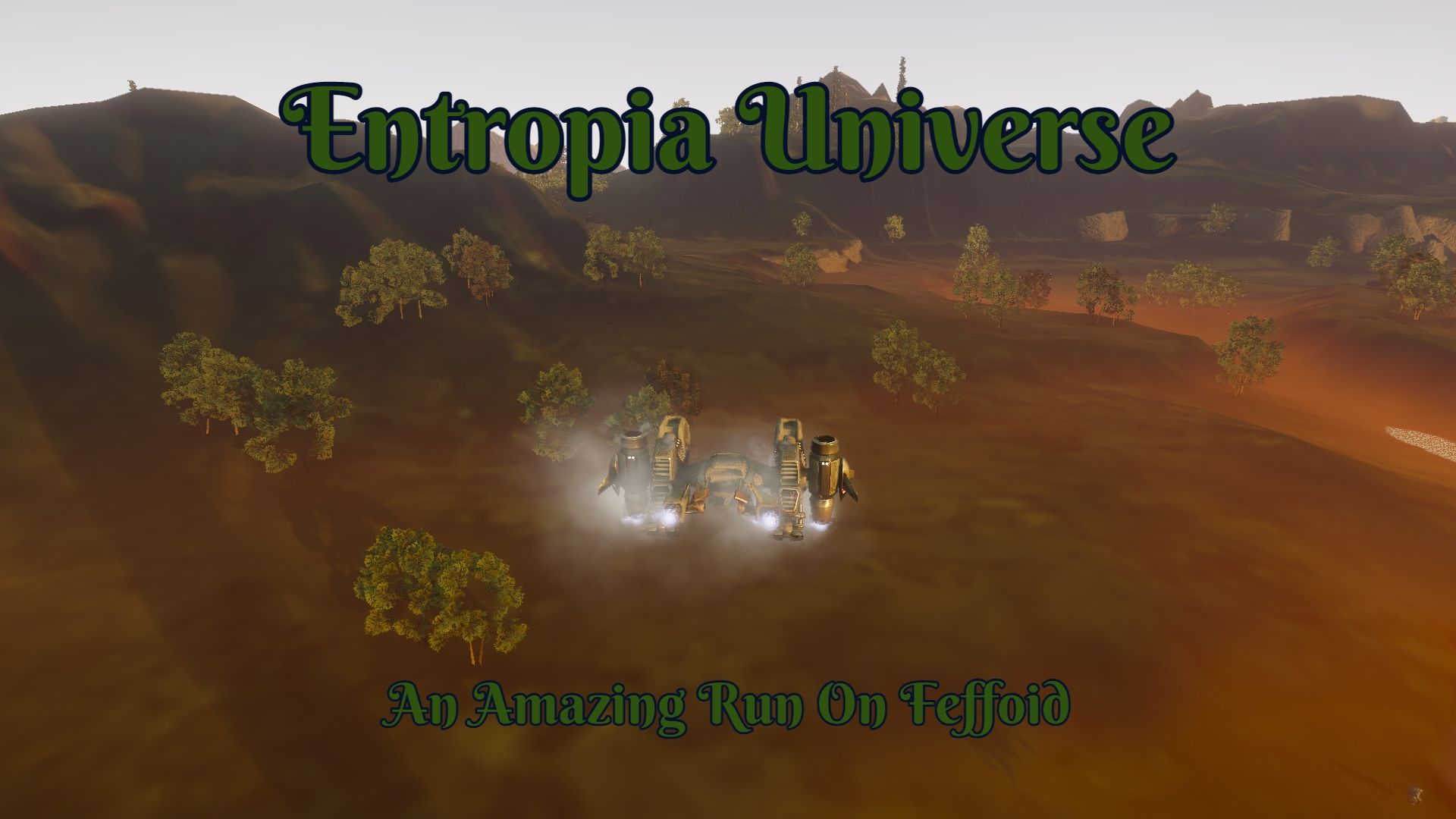 A single kill covered over half of my run cost. Sometimes I wonder why I hunt anything other than Feffoid as they tend to be rather amazing for me. Between some of the higher markup items they drop quite regularly and how often they global. This ended up being another extended hunt on them and I had a wild time. This naturally starts with me running my daily Feffoid Cave mission. While clearing it out I ended up getting a 30 PED drop from a single kill. That alone almost covered the entire cost to clear out of the cave and finish the mission.

I also lucked out and got some components as well. The loot off just 2 Feffoid in the above screenshot had to have been almost the been my entire clearing cost. Everything was pure profit. I however thought why stop there? Let’s turn this into a real run.

My normal Feffoid hunting spot tends to be in a swamp. There are some lower-level Feffoid there that can also drop some of the higher markup items I am farming for. While I would have preferred to have stayed there I’m rather glad I went and wandered off elsewhere.

There ended up being way too many players since I was trying to hunt during a rather active time of the day. Many players have also caught onto the markup you can farm off Feffoid. Every time I go I swear there are more and more players camping out in different spots.

This can also be seen as reflective in the price of some of the items that drop. As supply has increased from more players farming for them. Resulting in a slow but steady decline from the price I was getting weeks ok. Sometimes the price will rebound but I would not be shocked if over the long haul they end up going down by 50% back to the average decade price at some point. 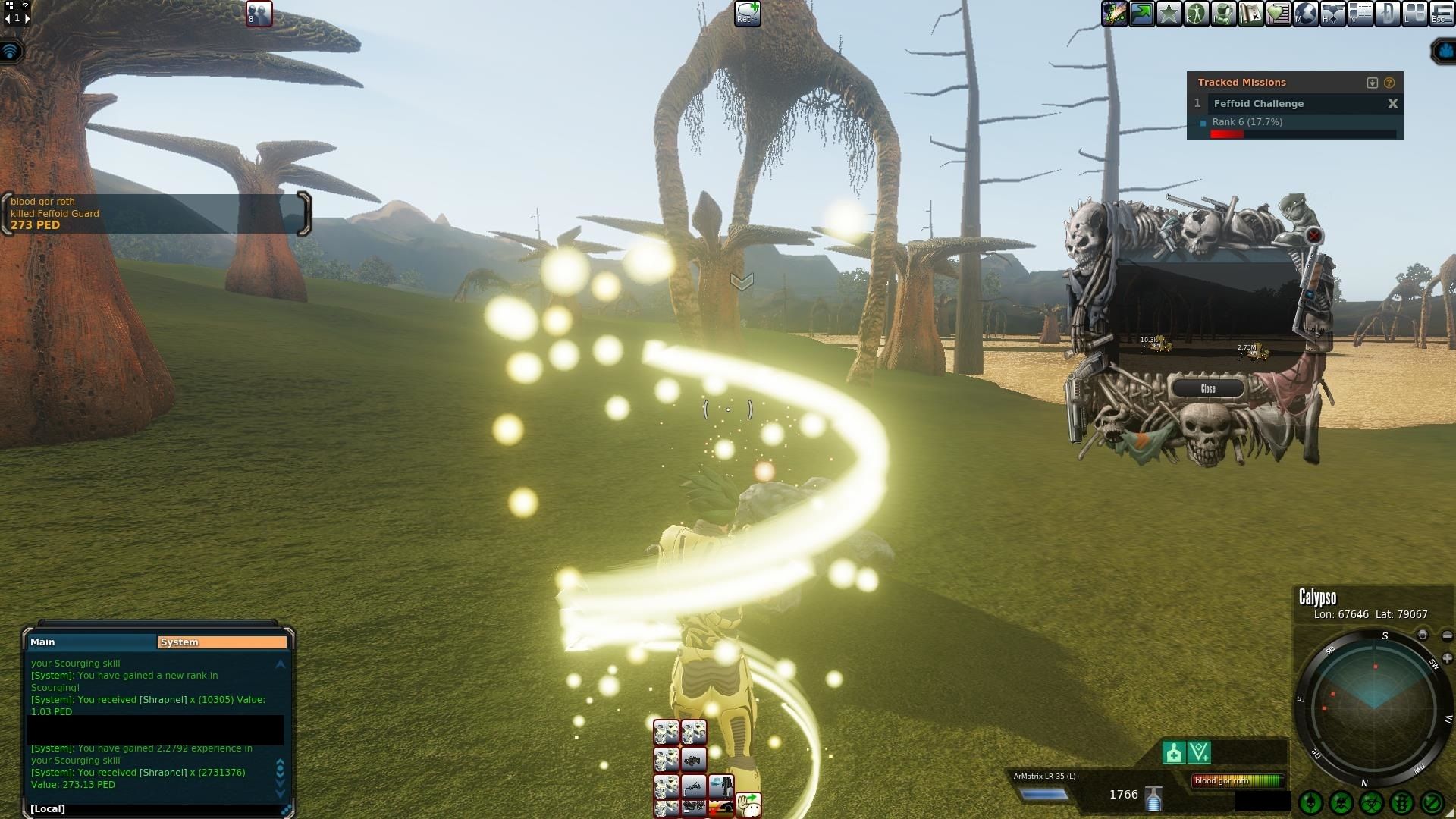 It did not take long for me to step out of the swamp to be rather happy I did. While things like Feffoid Guard are harder than what I was fighting in the swamp area a 273 PED global I’ll take any day of the week.

That also covered the costs for over half of the total run I was planning to do. Add in what I already got in the cave and things were looking quite up. I could have called it quits here and had an amazing run. I however prefer to finish things off as you never know what you will get next.

I’m also not here hoping to get global either. There are a couple of items I would not mind dropping that have helped turn a lot of my hunts on these into profit or near profit runs. The skill gains were also decent although not as great as a lot of the bigger things I tend to hunt. 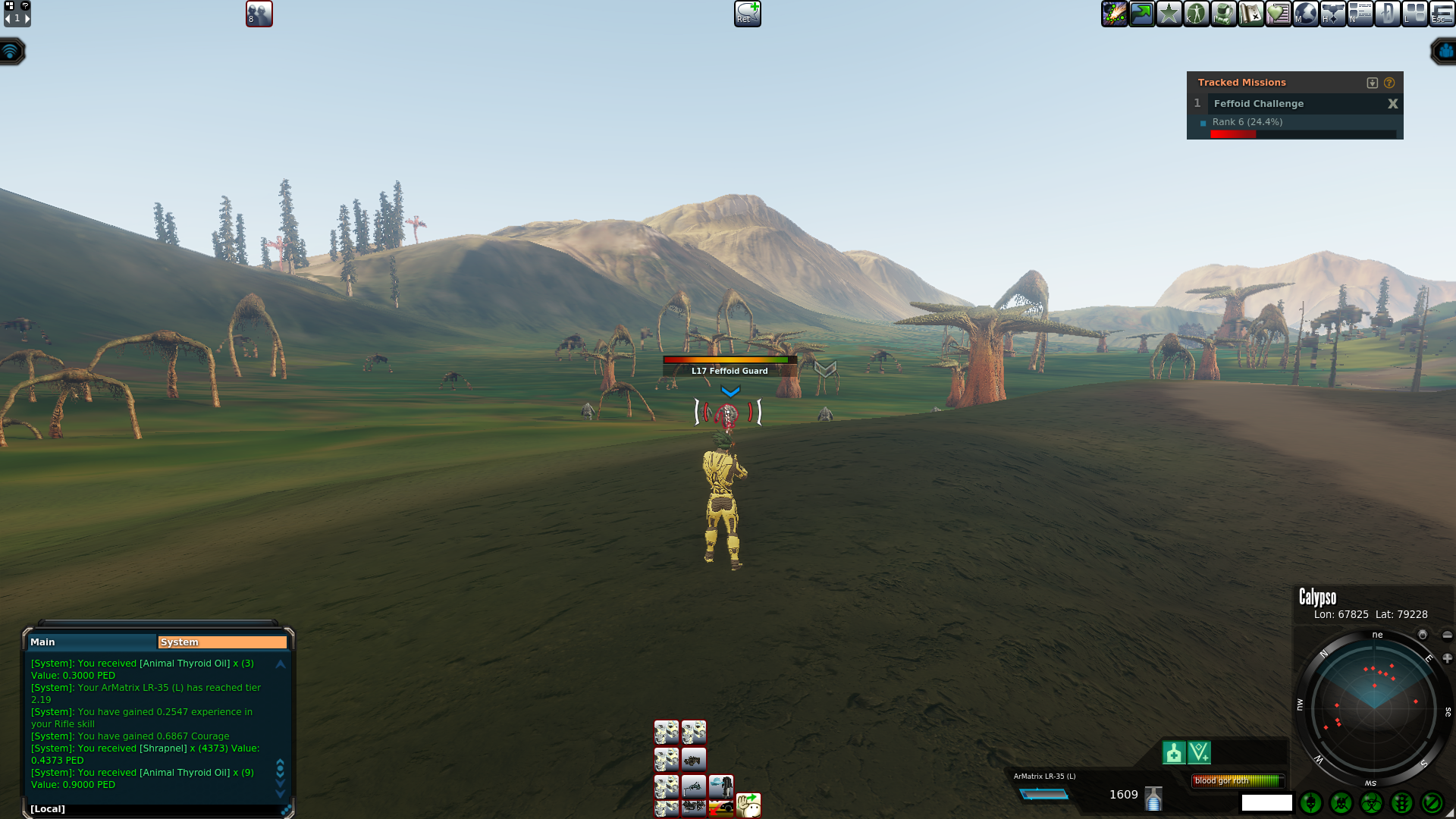 This new area I ended up wandering into was quite a nice hunting area. It was a valley between some mountain ranges that gave a nice view. Other than seeing one other player there who quickly went the opposite way I was going. I had this place to myself.

While I could have just gone up a little more on the hill I was standing on in the screenshot and camped there. Which would not have been so bad with how many Feffoid I should have been able to reach with my gun.

I decided I would wander around the area. I can kill Feffoid fast enough that by the time I end up clearing out an area and moving forward I almost don’t have to worry about getting re-spawns on me. I’m always looking to avoid getting a bunch of adds on me.

Feffoid is not that challenging of a creature for me to hunt. I am fighting them in my Adjusted Pixie with 2A plating my rather standard gear setup for hunting most things. My armor repair bill for this entire hunt ended up being laughably small at only 0.47 PED. 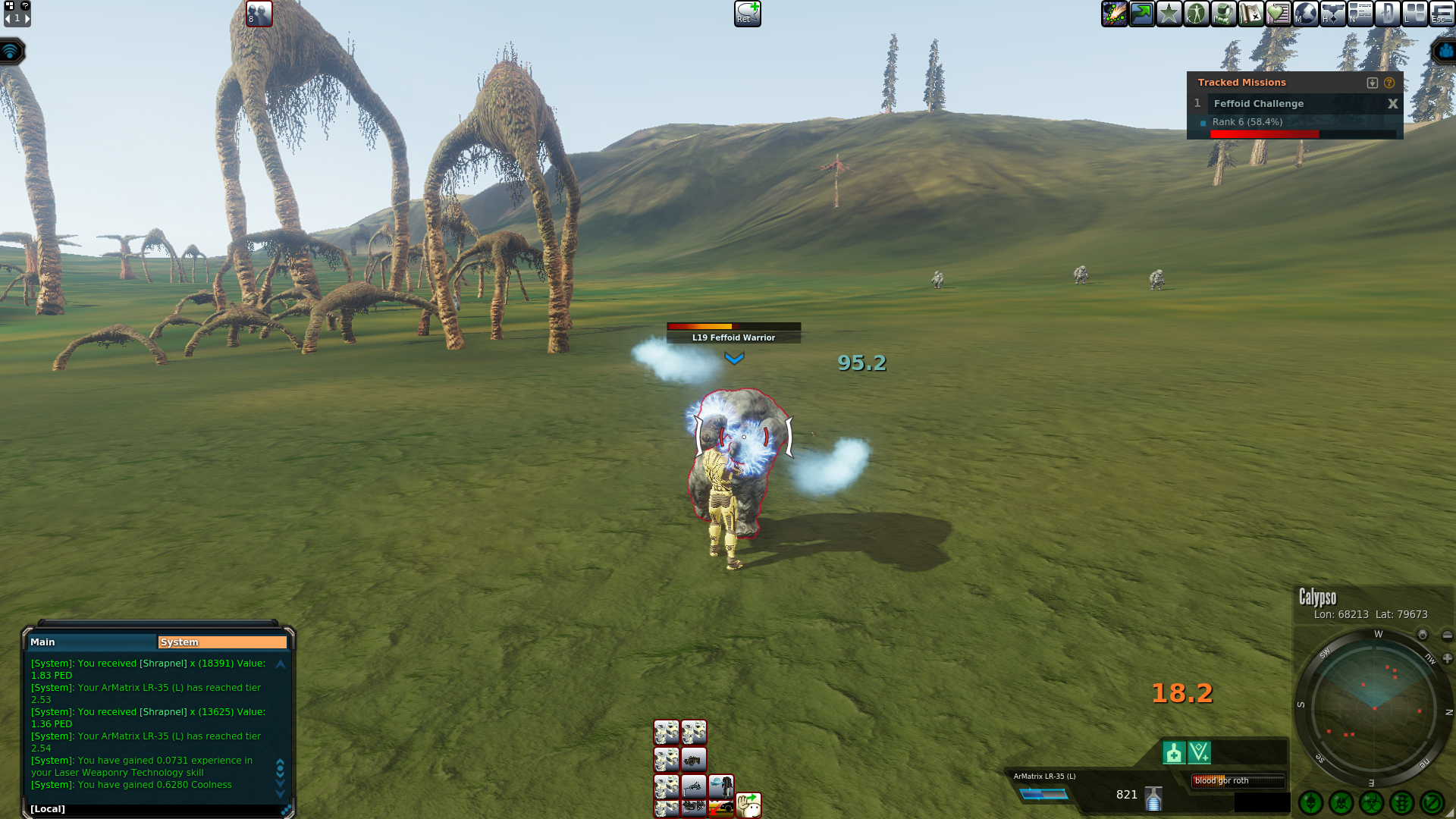 Since I was fighting some higher-level Feffoid such as warrior I needed to heal a bit more often than I usually do. I was hoping to see if there was any kind of different frequent drop from these higher-level ones. That ended up not being the case from the best I could tell.

I at least was not dealing with getting adds on me. If I was in the swamp with other players you are sometimes shooting over each other and walking into areas that are just respawning. Things get a little bit messier around the swamp area.

It was a rather relaxing hunt after I got that decent global. I did not care too much if the rest of the hunting trip had bad loot. I was already doing quite well and had a couple of PED worth of items that I could sell for 400-500% markup. I ended up getting one final global for the hunt. It was just 54 PED worth of shrapnel. While not ideal I at least could convert it for 101% into universal ammo. You might notice during this hunt the icon of the ammo I’m using is a different color than most of my hunts. I have at least at the moment run out of converted shrapnel ammo and been using the stuff you can buy off the vender.

Loot from here on out was not a total disaster either. I would sometimes get a 10 PED or 20 PED drop. Most times when that happened it would just be more shrapnel. It’s a shame I have yet to see many of the more uncommon to rarer drops off these. I have certainly been hunting them a lot as of late. 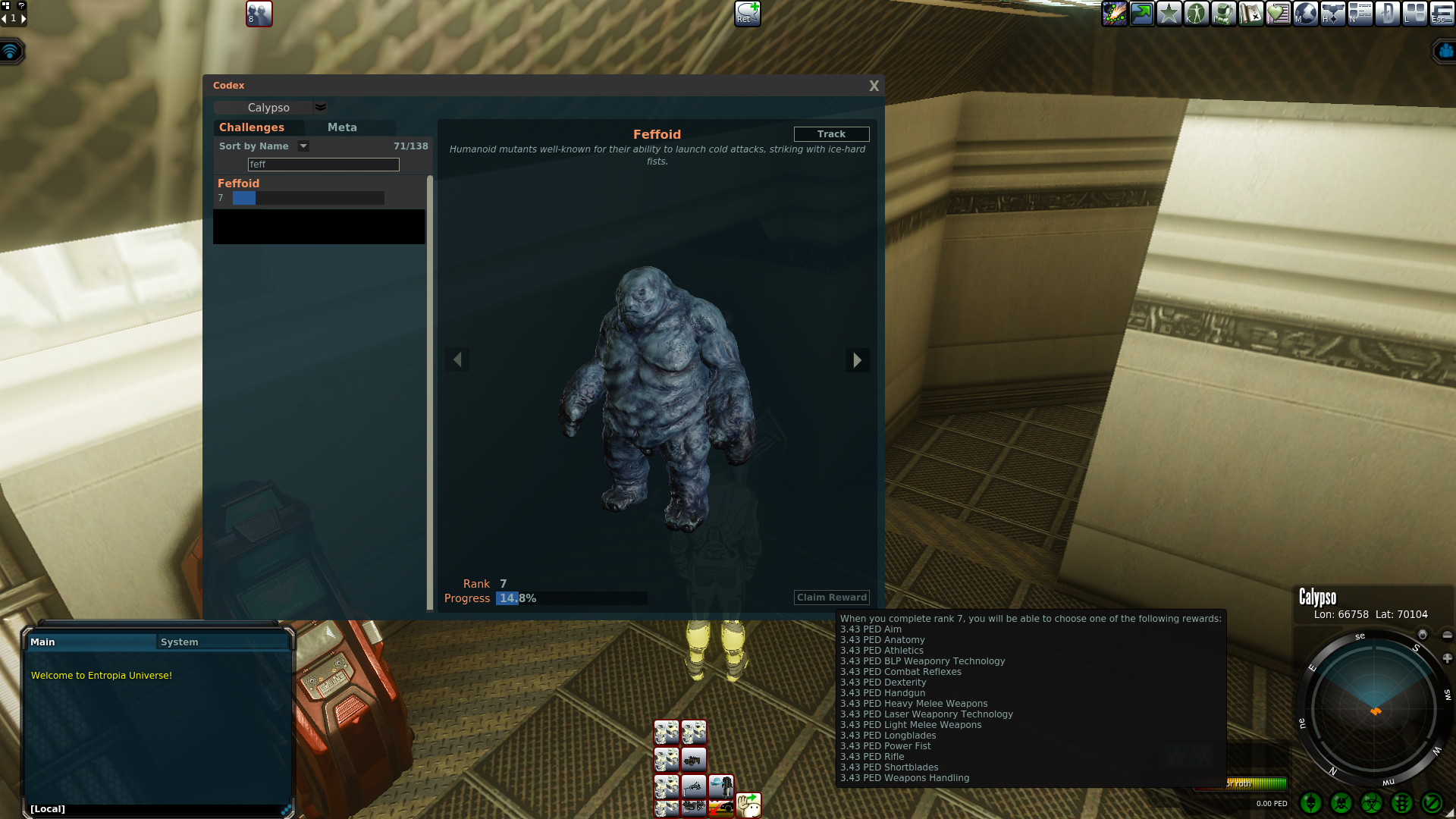 I’m starting to get to a point where the Feffoid Codex is starting to reward rather nice skill gains. Which was one of the many reasons I’ve been in the mood to hunt Feffoid a few times. After this hunt was over I had finished rank 6. Those rank 7 rewards look nice. I’m not quite how many I would need to kill to be able to get it. Quite a few other players were getting a global off Feffoid that day. I must have lucked out and found a spot to myself. Even more so I walked away with over 700 PED in loot being up 50%+ after markup and a few other things are included. What an amazing run.