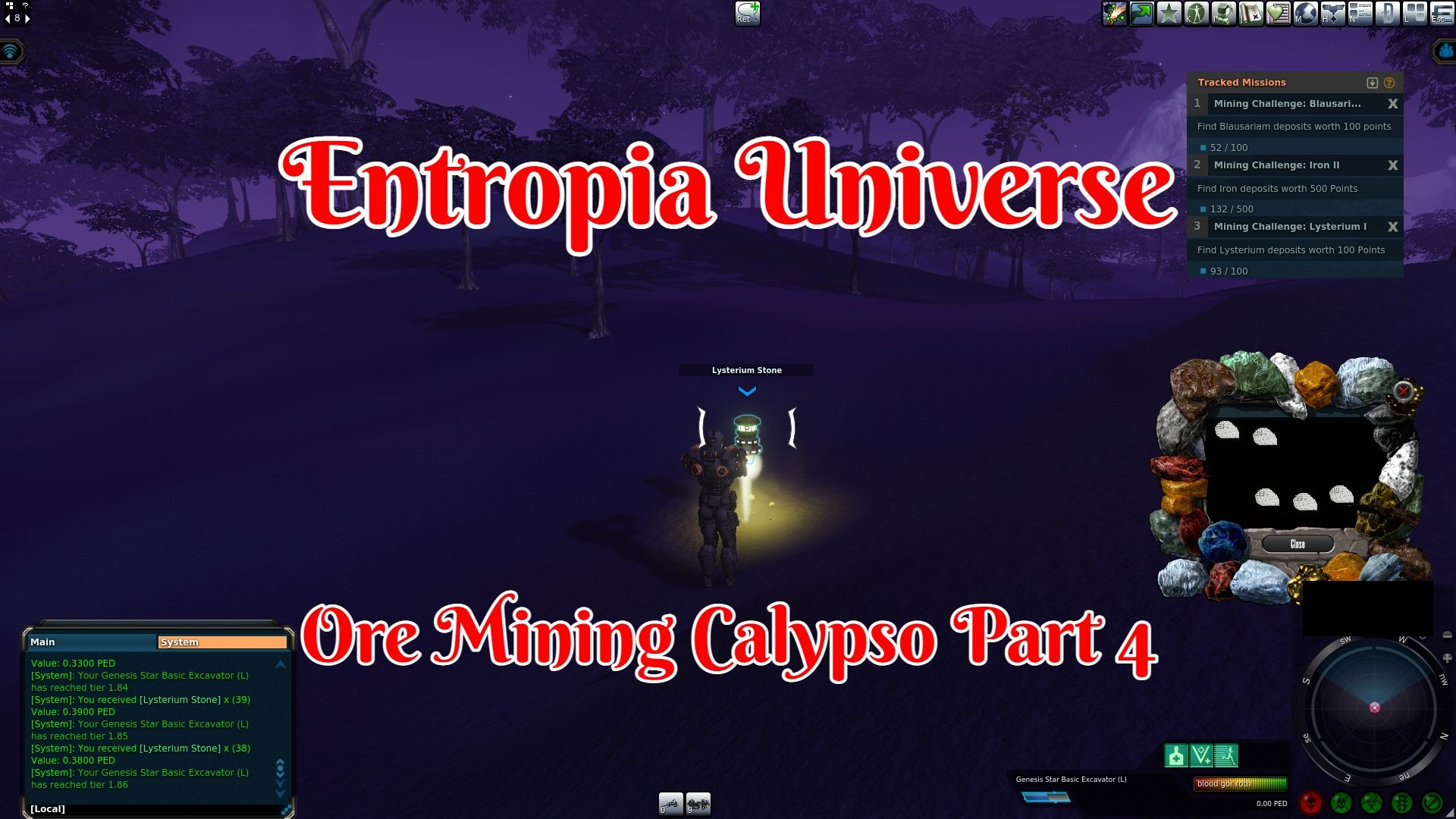 With the massive area, I went mining in for ores not being what I was hoping it would be. It was time to move locations onto a bunch of smaller areas. There was a decent amount of traveling to locations for my next run.

While I do have a decent idea from data I have in places I want to check out. They don’t always turn out to be a place I find worth the effort trying to mine in. A couple of places I was interested in checking out ended up having some thick spawns of harder than I would have liked creatures.

In the past when I was on another planet mining higher markup ores it would have been worth the cost and the extra effort to mine harder to get claims. Even if they were in the middle of a massive heard of say Atrox or something that would not kill me instantly. It just took some effort to get the mining claim out. I use to have all kinds of bags of tricks to get a claim out. I’ve destroyed several cars in-game to the point that they can’t be repaired anymore in the past. I would use them to relocate the heads of creatures just so I could get to one of my claims. After doing that a hundred times that car was long dead and no amount of repairing would bring it back to life as the critical integrity of the car reached zero.

I also use to have a much bigger extractor. That way I could go in and dig a claim in just one or two cycles and then fly away. I would also land my ship in a way that when I existed I would land right next to my claim to quickly get the resources.

I have even been known to use my ships to force creatures to go around them. Buying myself a few extra seconds before getting hit by something. All so I could get a claim out of a bad situation.

There has also been an instance where I would just hunt and mine. Sometimes you end up in a situation where you have something you are fine hunting and an area you want to go mining line up. Those situations are sometimes the best as you tend to have decent hunting or mining or both runs.

These are all options in my tool belt. I’ll admit them I’m a bit rusty on pulling off some of them or lack the tools for others. I however gave it a try. One area only dropped a few probes on was player-owned with very low taxes.

I would fly around drop a probe, wait, and then get back into my ship and repeat. While the land area had dense spawns they were lower-level creatures that I could take a few hits from. I did end up getting some claims there.

The issue was both times it was Lysterium which takes a while to mine. So I had to try and fish those claims out of a pack of creatures. I could maybe pull it off in around 5 minutes or so. It just did not seem worth the time spent, decay has taken, and the frustration of mining like that. So I went elsewhere. 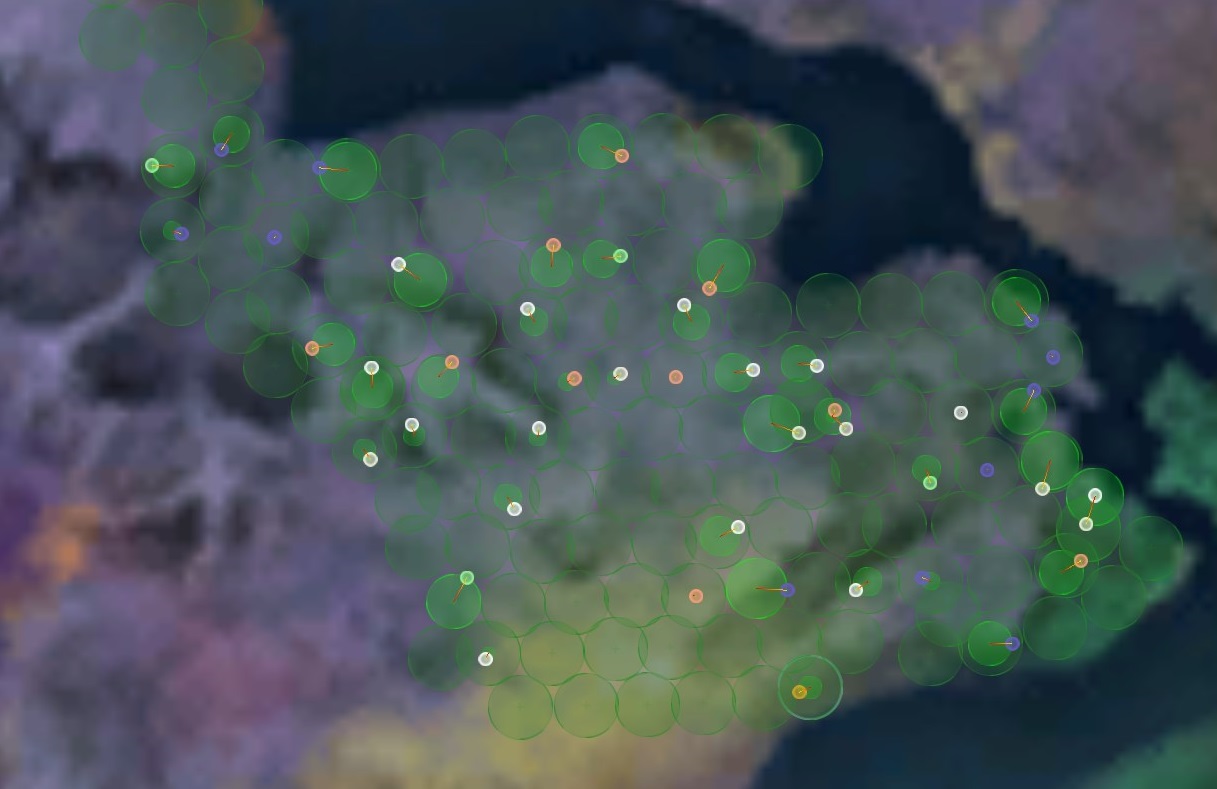 This was my Little Big Mining Log map of one area I got some decent coverage on. There was a river running on one side of things. Along with a land area where I did not mine on. Anytime I would step into the player-owned land area I would stop mining and walk back out.

The land area itself had more taxes than I was looking to pay to mine there. I also happen to have seen another player a few hours before I get a global there. While there was a chance they ended up mining the section I did as well. I got some decent finds.

Running into other players' mining was something that happened a few times on scouting some new areas on this run. While more times than not there should have been about an hour’s worth of time mining between them and myself. This should be more than enough time for resources to respawn. I was just not willing to risk it.

After changing locations several times. I ended up finding myself in a nice quiet little area. While none of these areas had as much free-forming land as the couple of places I scouted out in my first posts. It was more than enough to finish off my run and call it a day.

Nothing amazing in this run either. My biggest find was only size fives. More times than not low markup ores as well. Not exactly the result I was looking to have. Sometimes that is just how it is. With the end of this trip conclude the amount of PED I was looking to cycle testing out a few different areas as possible locations for mine. I had enough of most ores I found to refine them and list them for sale. After all costs, I did end up walking away slightly down.

I was a little shocked by how much mining I did do that I never had a single global. Along with the fact, my biggest find was only a size 9. A single global and I would have been into profit with a couple of PED to spare. It was just not happening this time around.

As far as all the data I’ve gathered I’ll be spending some time looking over it. The results of my analysis won’t be something that I’ll be sharing beyond what I’ve shared in these last few posts about these mining trips. There are just certain things I need to keep to myself since this is a real cash economy game and such information can be worth a decent amount in the right hands.

I do know from a quick overview of my data that I still have not found exactly what I want. I will more than likely need to conduct a lot more mining and scouting in further regions on this planet if I even end up staying here long-term for things like mining. This will be a slow process that will require a decent investment on my end to keep carrying out.