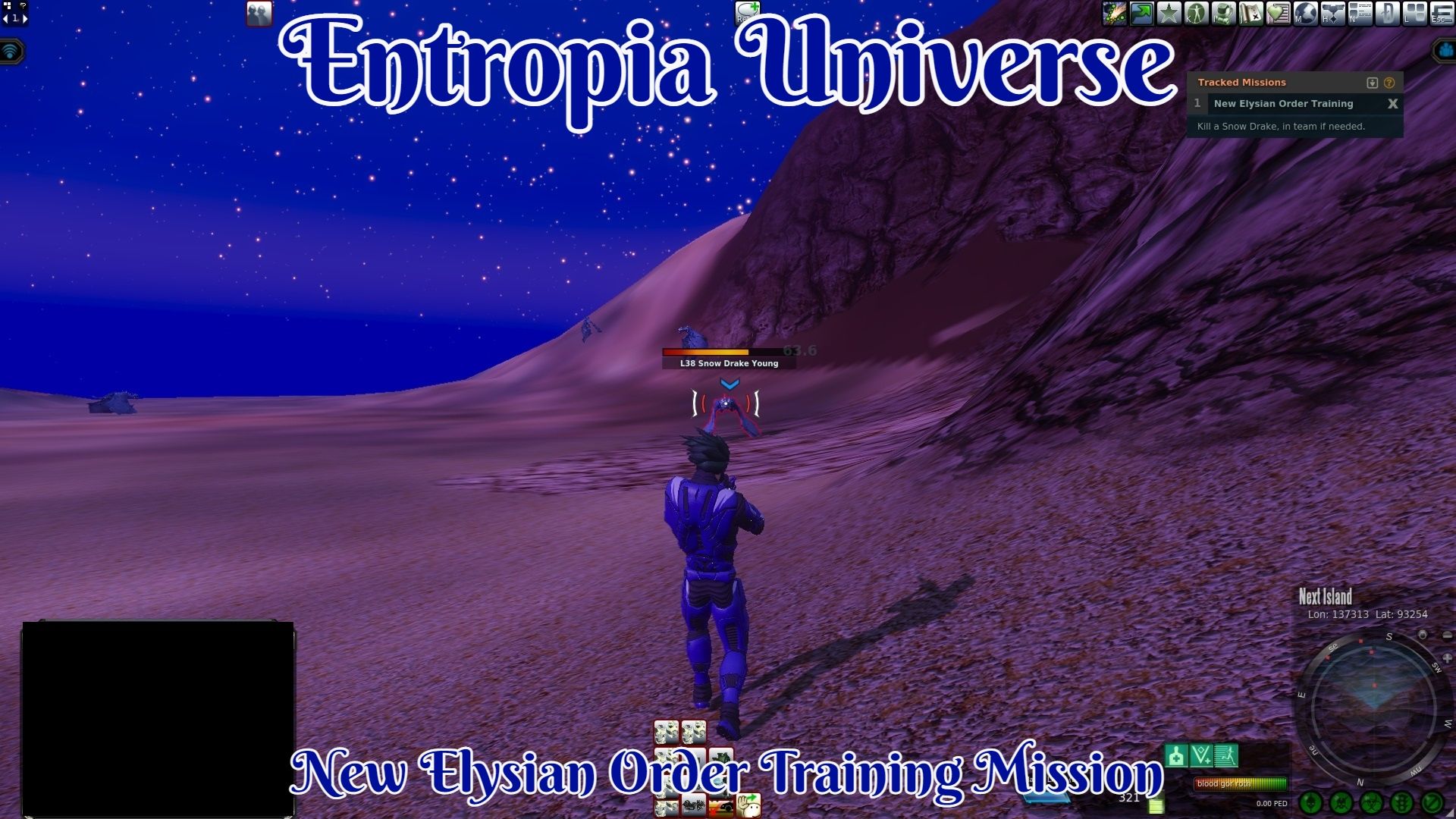 On Next Island you can acquire quite a critical blueprint from completing a New Elysian mission where you go through training for the order. It involves a lot of talking with NPCs, flying to different locations to find objects and some hunting. This is however important to work on as you obtain the Crystalline Core blueprint for doing so. 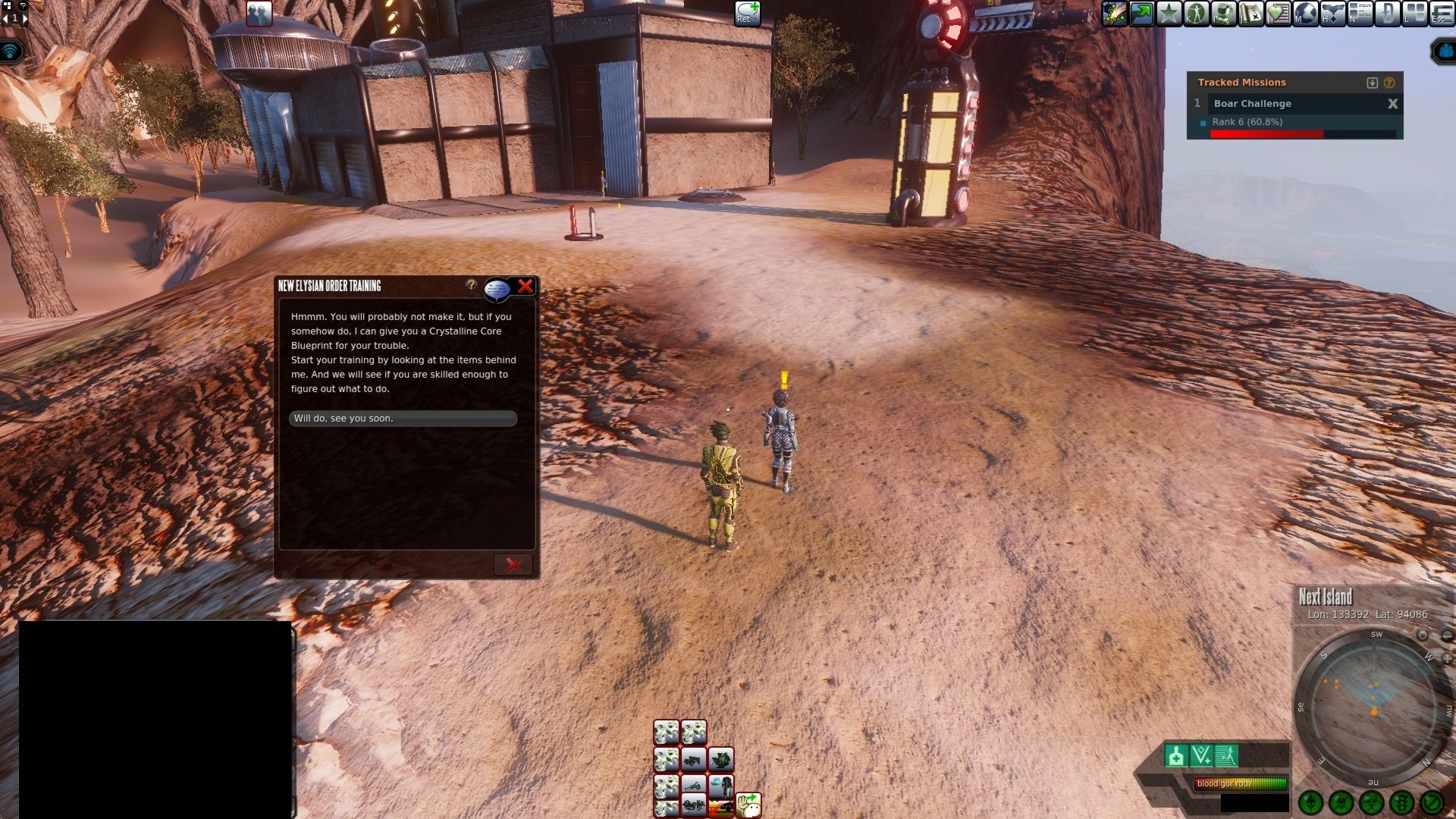 You can find the starting NPC Overseer Alice for the New Elysian Order Training mission at (133392, 94086) right next to the Sypherton Gardens teleport.

The first thing they want you to do is to take a look at objects on the table and click on the correct one which is the boot. Then return the same to Overseer Alice for the next part.

The mission will “help” you by giving a waypoint you first travel to. After that, you are looking for a cave entrance a decent distance away at (137622, 96135). Once inside you need to interact with a broken weapon that can be found inside on the ground. 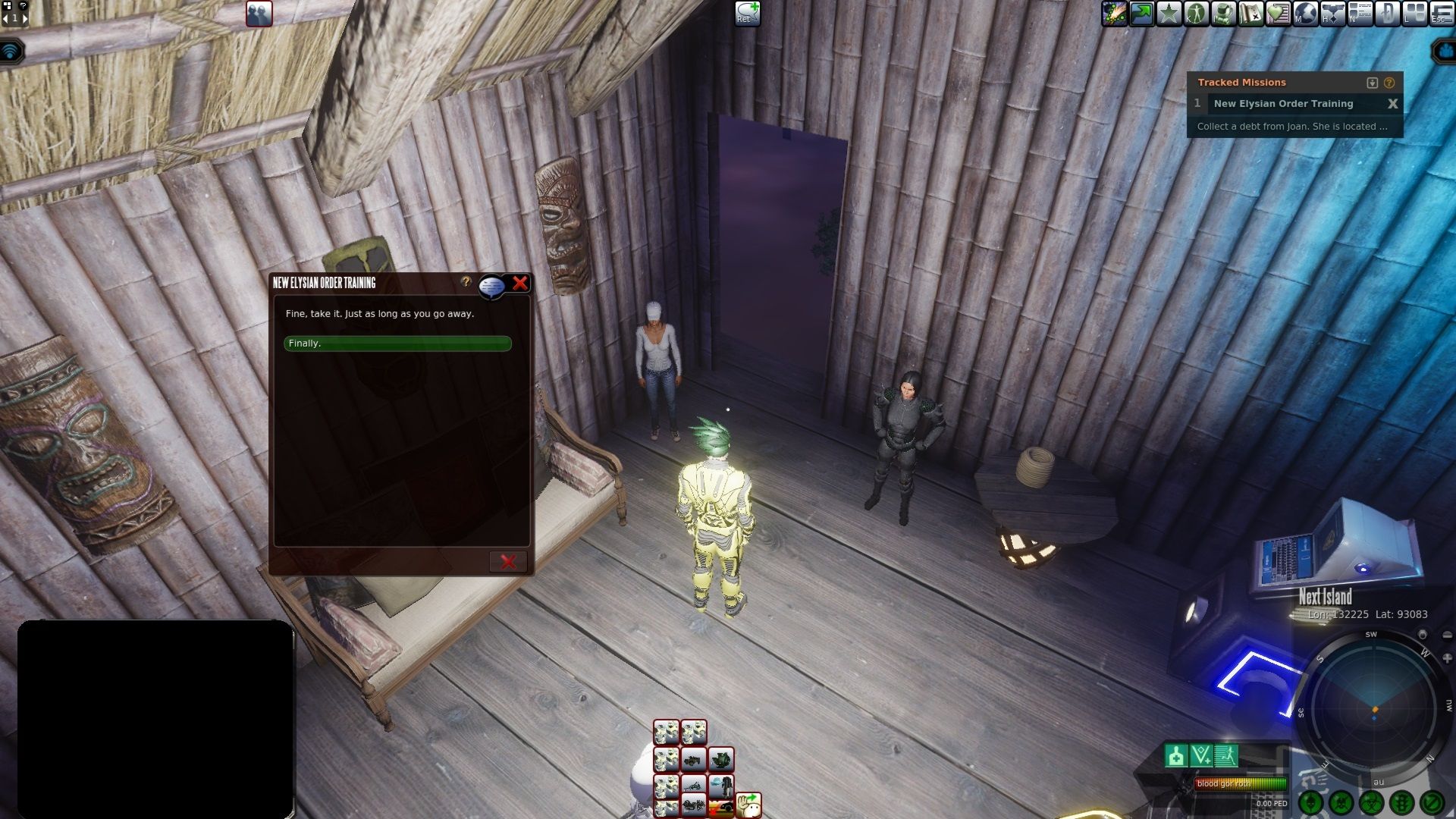 Head to Hillside Hideout teleport and into the shack next to it. After a little bit of chatting with Joan, you will collect the debt. Then head back to Major Hoffman. Next up you are looking for a tree stump that can be found at (134809, 93399) which is quite a bit east of Sypherton Gardens teleport. It will be in a large area with a lot of other tree stumps and trees. 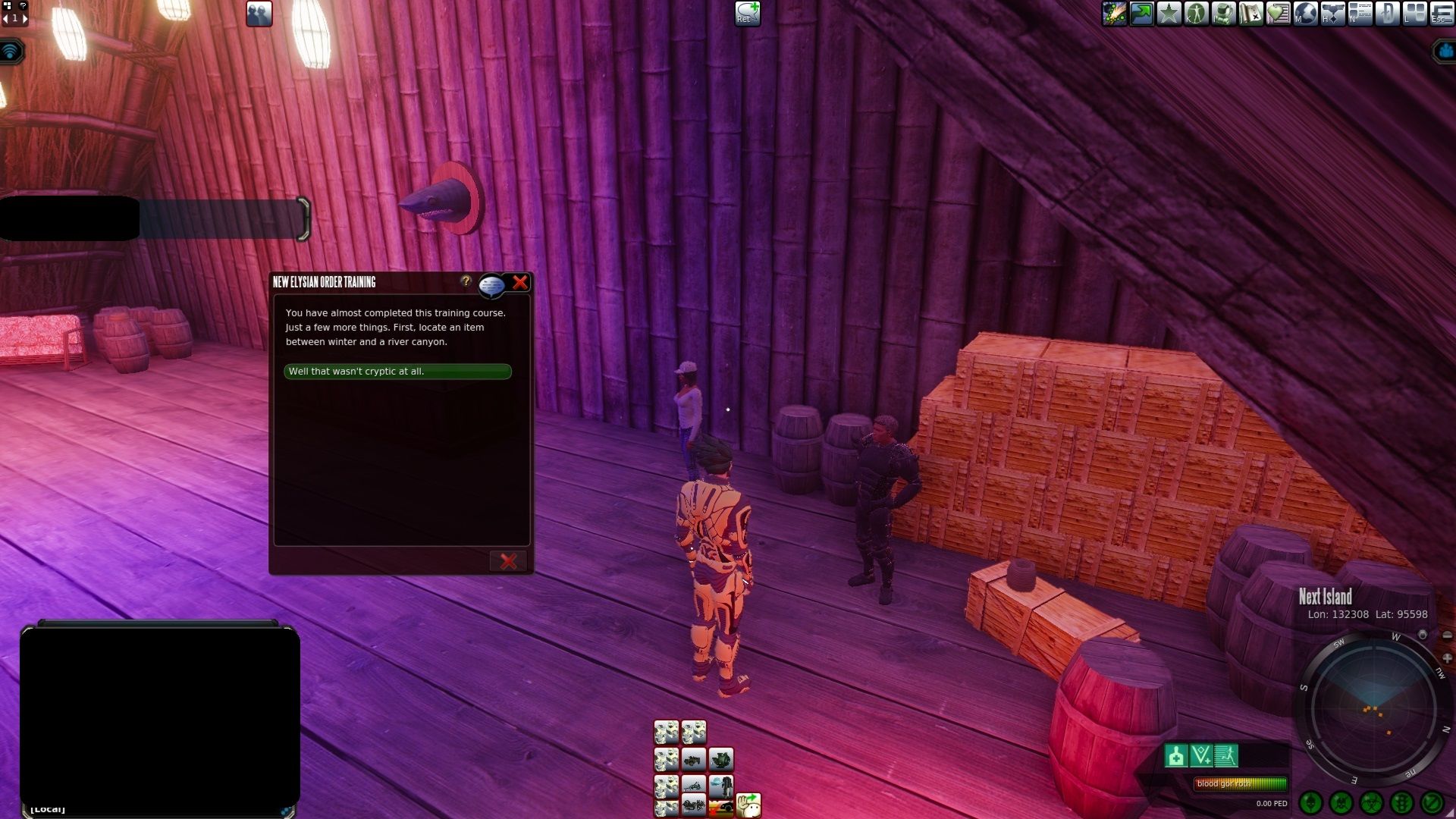 Next head back to Major Hoffman. This time around you will be asked to find an object with some very cryptic clues about where it can be found.

That item in question is called a N.E.O. Holographic Unit and can be found at 135330, 93246). This spot is somewhat in between Crimson Fields and Sypherton Gardens on the field side not quite crossing the river. Once you interact with the object head back to Major Hoffman again.

For the next mission, you are given a choice to take the easy way which just rewards the Crystalline Core blueprint, or the hard way which rewards the blueprint and a small amount of crafting ingredients for it. Since I’m a solo player I picked the easy way. A young snow drake was found around (137328, 93245) with the nearest teleporter being Crimson Fields. They have 2100 health and deal high amounts of cold damage. As long as you have something like an Armatrix Lr-35 gun or better you can kill one of these drakes by attacking at max range and walking backward. If all else fails you have a short run back to finish it off. 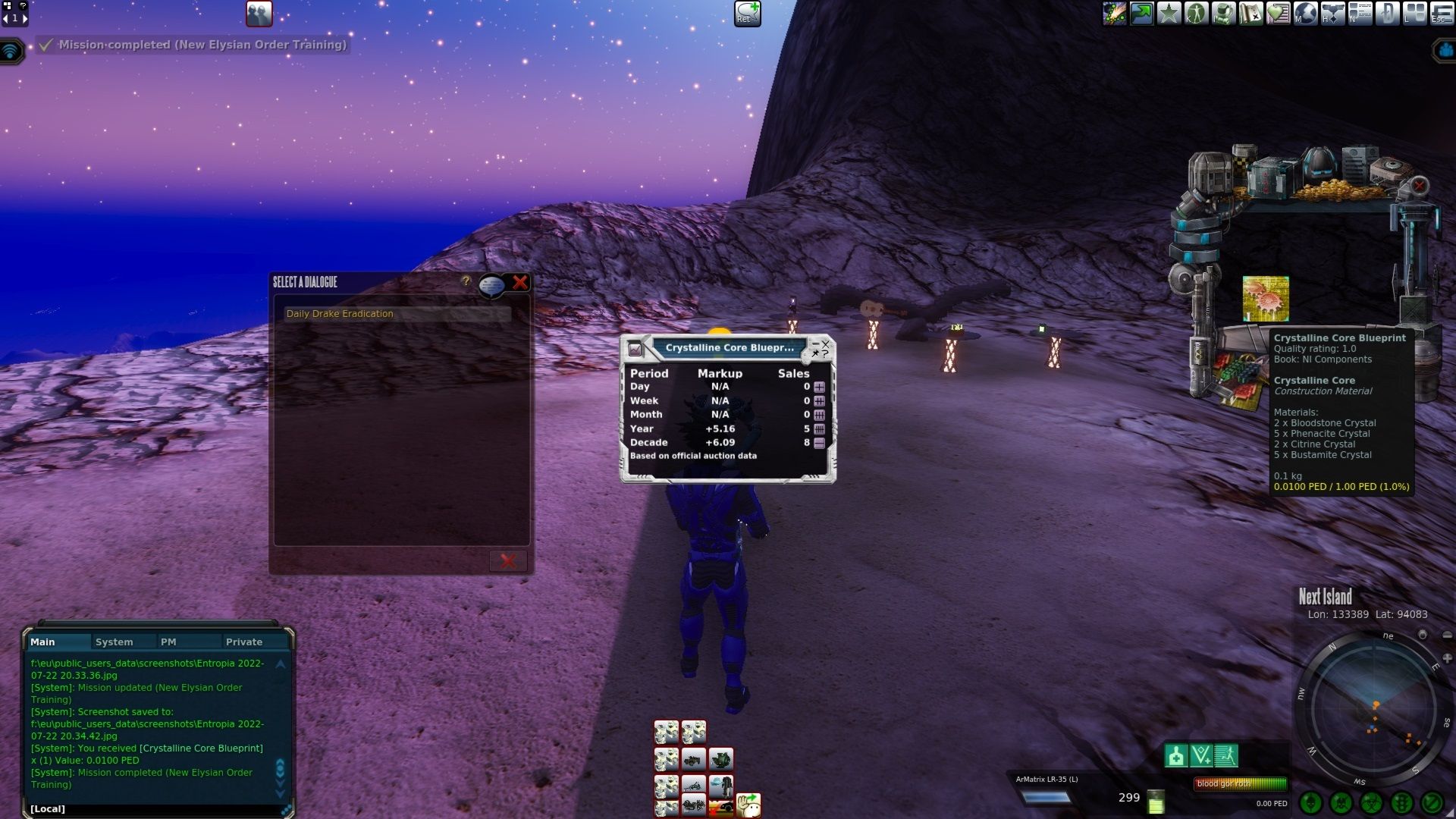 Once you have completed that you are returning to Alice Overseer in Overseer in Sypherton Gardens teleport. You will be rewarded with a Crystalline Core Blueprint.

Crystalline Core is quite a critical crafting resource that tends to drive the price of many Next Island drops high. While many blueprints use it from clothing such as Chef’s Hat to a vehicle called Scavenged Skyripper.

Most people are looking for Crystalline Core for upgrading Incision plates. I’ll have a further guide on Incision plates themselves and some of the basics.

Overall not that hard of a mission but the ending part. Thankfully if you can’t solo a drake yourself it only takes a couple of people to be able to take down drake. It is quite cool that Next Island has a lot of missions like this that reward you with a blueprint that allows you to craft an item that is quite needed depending on what you are looking to do on Next Island.

This was also quite a cheap mission chain to run. Outside of some gas and the cost to take down a single 2100 health creature. It is mostly just spending time exploring different areas of Next Island itself. I found it rather enjoyable.