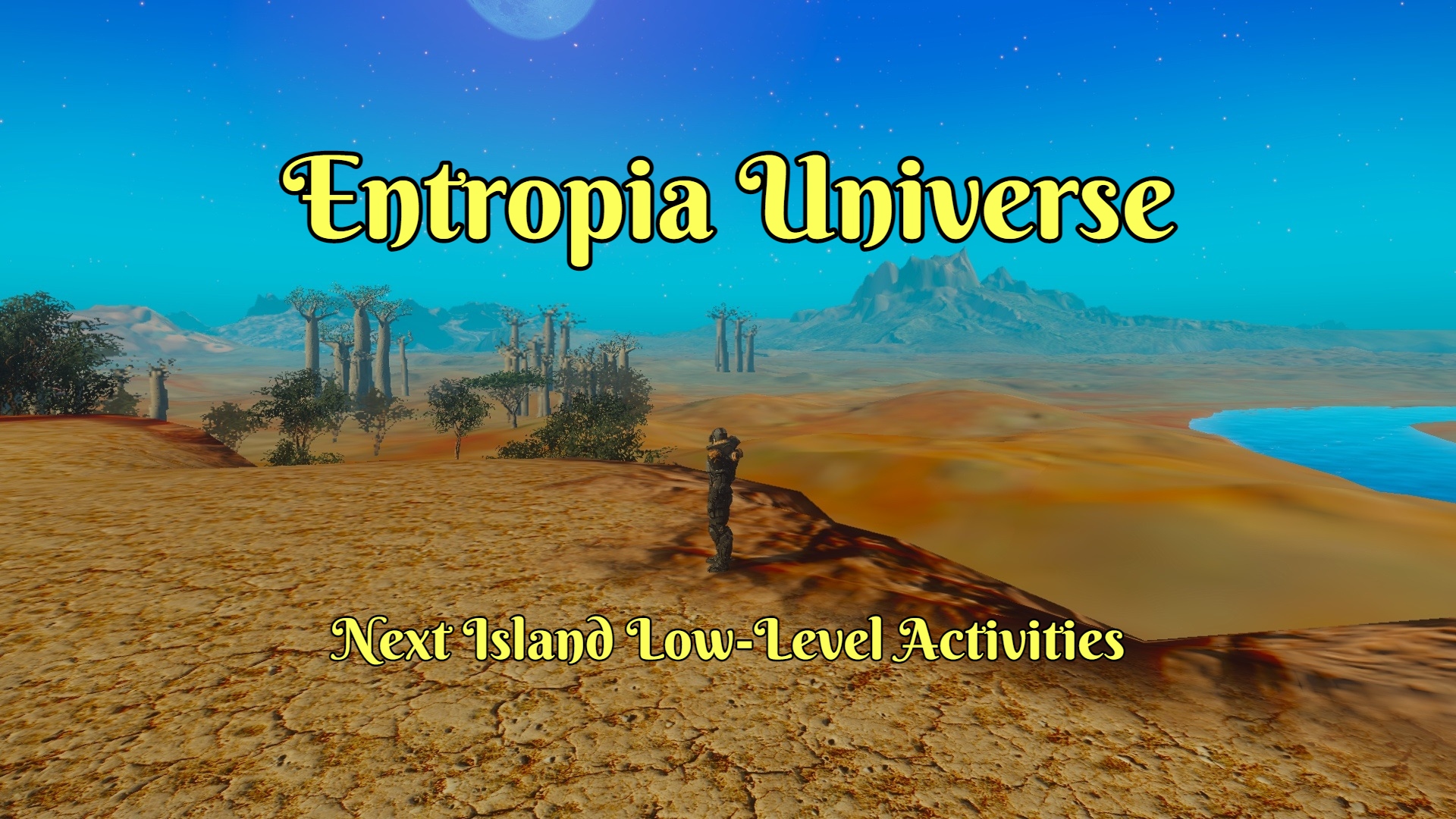 Ol’ Mort at (136213, 84242) offers a mission called Sneaky, Thieving Papoo. For killing 50 Grey Papoo you end up getting Fine Lens Blueprint, and a small amount of the crafting ingredients to craft the item.

This mission is best to hold onto till you pick up the Simian Problem that requires killing 250 Grey Papoo. I’ll be making a separate post about that mission change and including a link here once that is out. That will also go over where to find Grey Papoo. 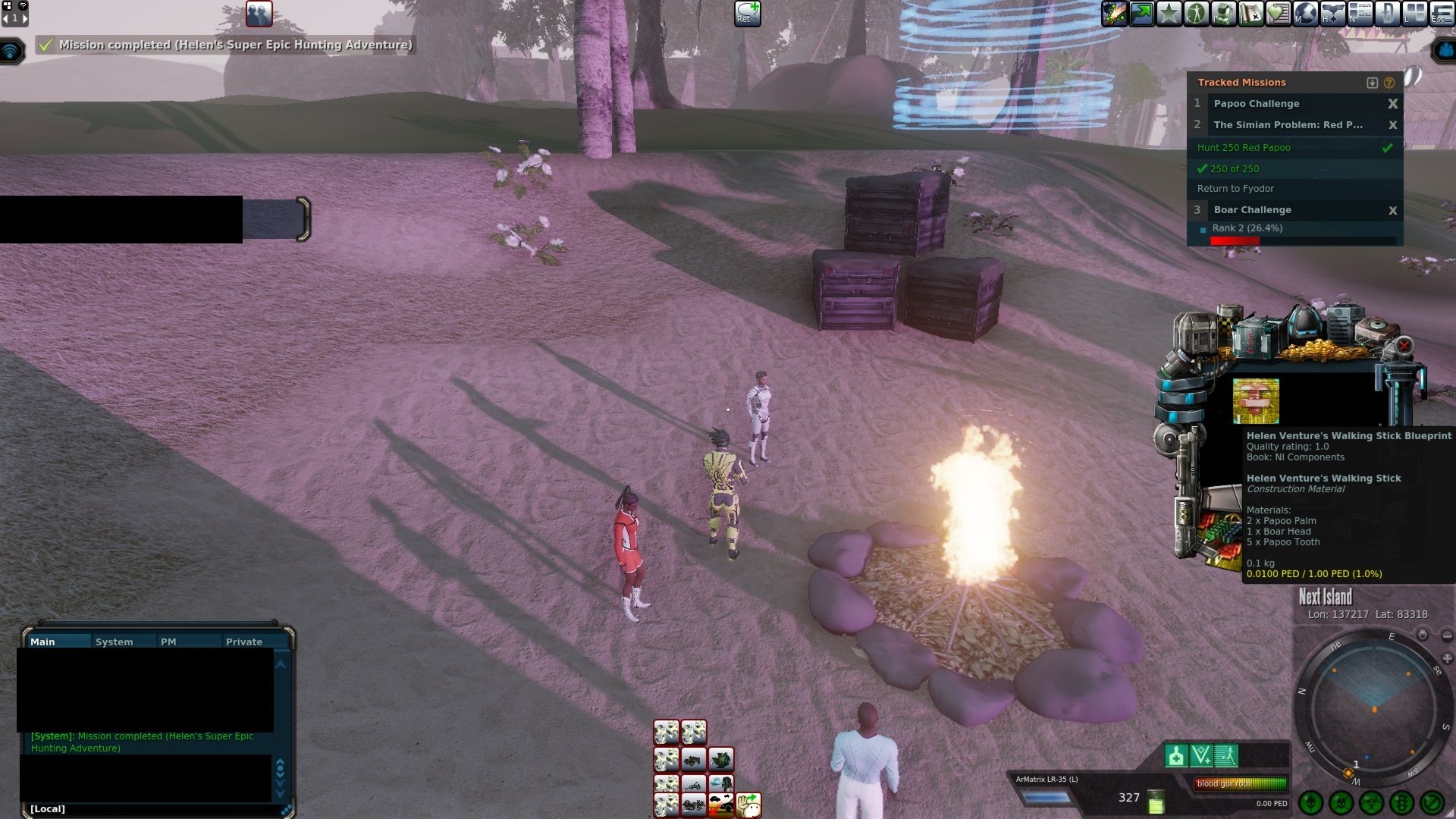 Helen and Miranda are two NPCs who each offer a mission that can be found around (137217, 83318) on Next Island. Helen’s Super Epic Hunting Adventure mission requires killing 63 mutant Boars and 63 Papoo. Meanwhile, Mirada has a mission requiring the turn-in of 20 wool for the mission Paint & Coloring. There are also other missions beyond these.

The reward for doing Helen’s Super Epic Hunting Adventure is a blueprint to craft Helen Venture’s Walking Stick. The item this craft is a Next Island component required in over a dozen carpenter crafting blueprints.

While nothing special if you are not into crafting. If you stalk this mission with others you are more or less getting this for things you would be doing otherwise. You are just out the time to travel. 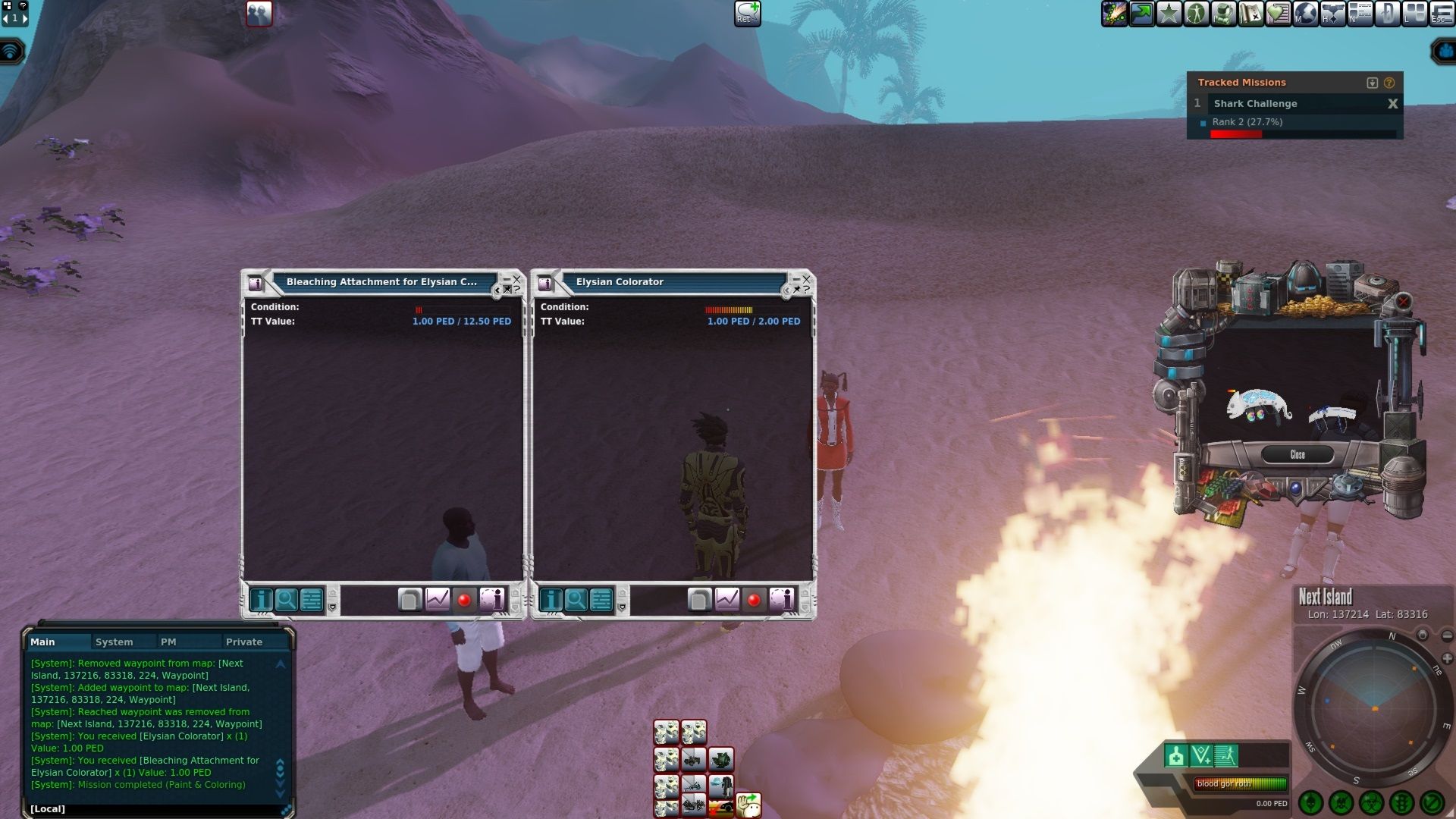 Once you turn in 20 wool for Paint & Coloring you get a Bleaching Attachment and Elysian Colorator. If you are not someone into coloring items the good news is depending on demand these two items can have some markup on planets like Calypso. Next Island has an actual sweating circle. Just outside the Crystal Peak teleport, you can see there is a giant odd-shaped circle on the ground. Players will use that as an outline to form around. It is also where a lot of players go to talk with each other and share things.

If you don’t know much about sweating I go over what to expect in a guide that was on another planet. Most of that applies here. You just have a different location.

Next island has quite a few things that require large amounts of sweat to be consumed daily. This is one of those planets that sweaters will often choose to be on for finding easier sales.

When you do get killed sweating here. Wait a moment to regenerate some health at the revival point before running back to the circle.

Higher-level players need massive amounts of sweat to trigger an event wave. Players also need it for crafting a certain blueprint. Either way, those in need of sweat will go here looking to buy some. While I have shown a bit of the exploring side of the Next Island in my intro to this planet post. It is one of those planets you just need to spend some time exploring around. You would be shocked at what you end up finding.

When I first got here I found maybe a dozen or so different teleports. Lots of areas seemed to be void of much. I thought I had found a decent amount of stuff and I was getting close to what this place has to offer.

That ended up being just a taste of all the things going on. The landscape here I just can’t get over how it feels like a lot of time was spent sculping it and putting in riverways. Along with little areas, most people more than likely just skip over and never truly notice the wonder they are adding to the overall backdrop of that area.

I often find some of the adventures I end up in Entropia Universe are the direct result of just getting lost somewhere and having a good look around. Despite how much of this game I have played and all the places I have explored. It seems I still have so much more to discover and even share with others. This part of the game always keeps me coming back for more. While most planets have codex now excluding one of them. It is always something important to bring up as something you can work on. Both Next Island and Ancient Greece have creatures you can hunt for codex progress.

These are often great things that you earn from doing a lot of other things that you were going to do for a mission anyways. Sometimes you might notice you are close to getting to another level or just feel like hunting.

It is never a bad idea to go out and at least get a couple of levels for each codex on creatures you can kill. From there you can work out what you feel like grinding out for higher-level rewards. It is also a great way to learn further about a planet and what can drop.

I tend to use Codex as a way to target skills and professions I’m looking to level up quicker. It can also be a great way to try and catch up on a skill you feel is lacking compared to the rest of the skills you have. With all the activities you end up doing you might find yourself lacking being ability to use a big enough healing device, or a certain gun skill fell behind or there is something else you just wish was a lot higher. 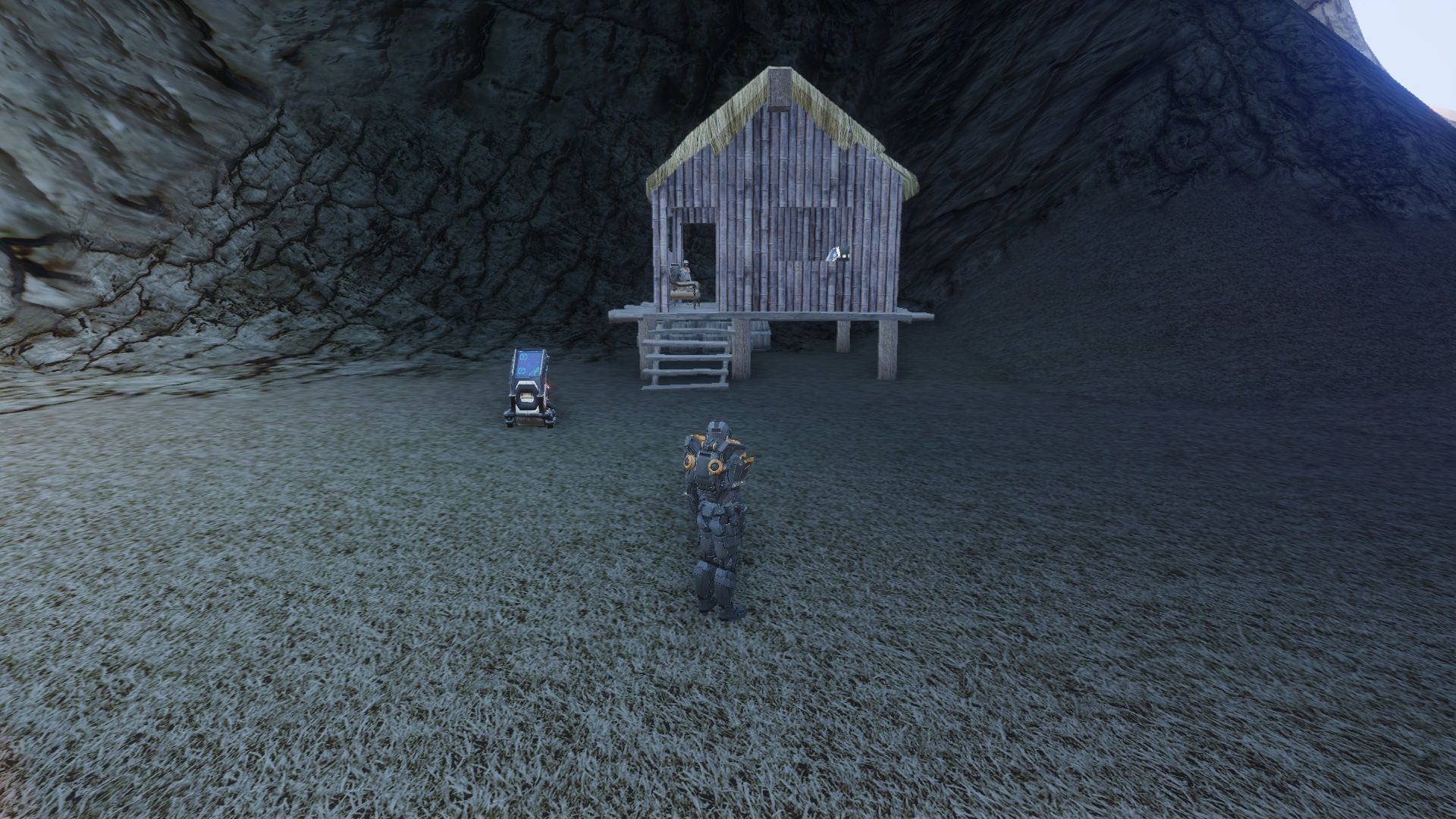 There are a bunch more things to do on Next Island including a lot of daily missions. A lot of these I found to be rather easy to do and you often find yourself in areas with further NPCS offering other missions that are not that hard. I’ll be covering more things to do that start to get a little harder in a follow-up post along with some that are rather easy as well.

Overall so far my impression of Next Island is of a decent one. There appears to be a lot for low-level players and spenders to do just for coming out here. There are also some decently high-level activities as well. There seems to be a decent mix of quite a few different things.