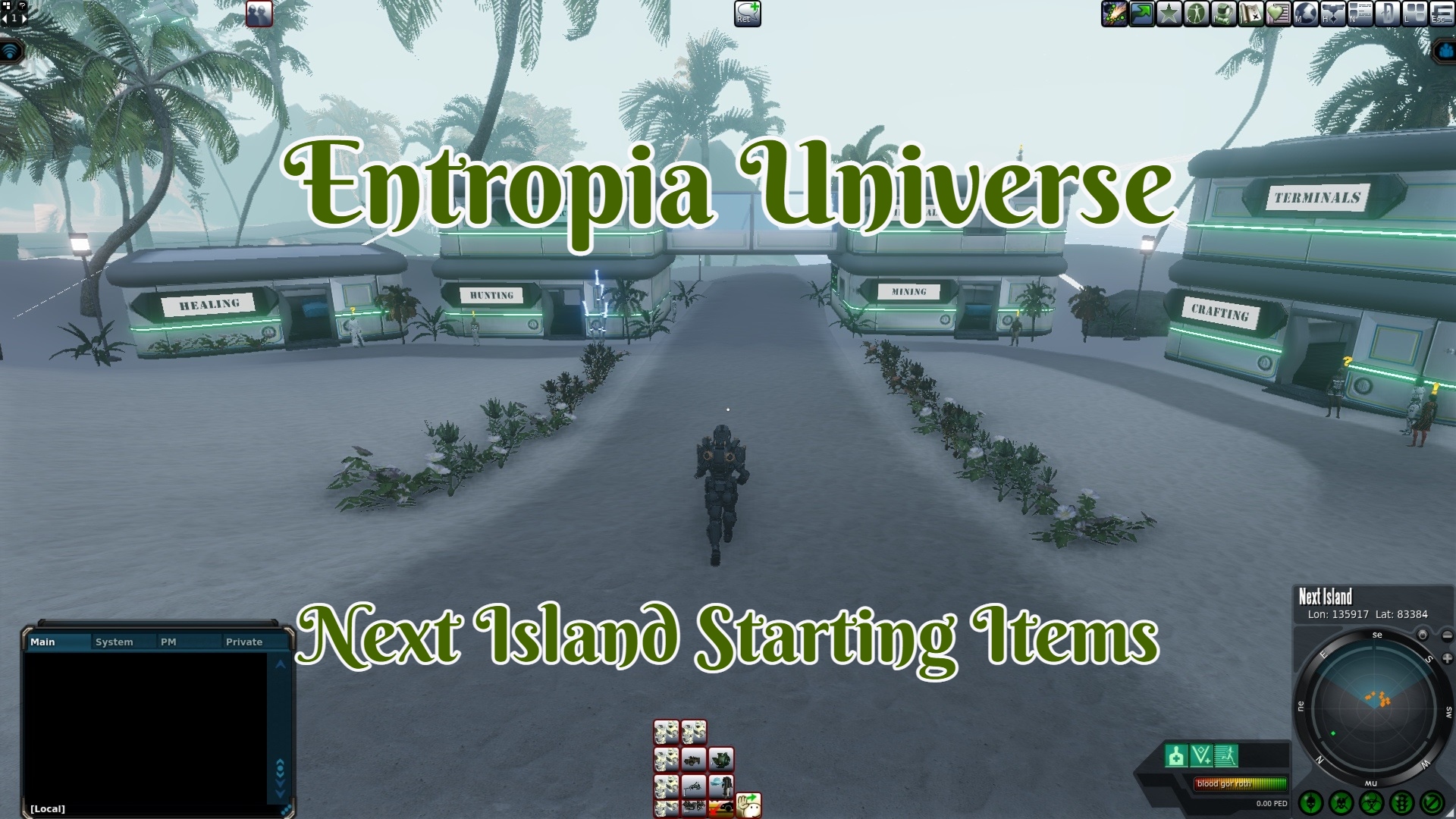 Next Island in Entropia Universe has a nice starting area for you to pick up a couple of missions and get some items. It involves a little bit of a walk. This is just one of the many things Next Island has for low-level players and those on a budget to be able to enjoy this planet. 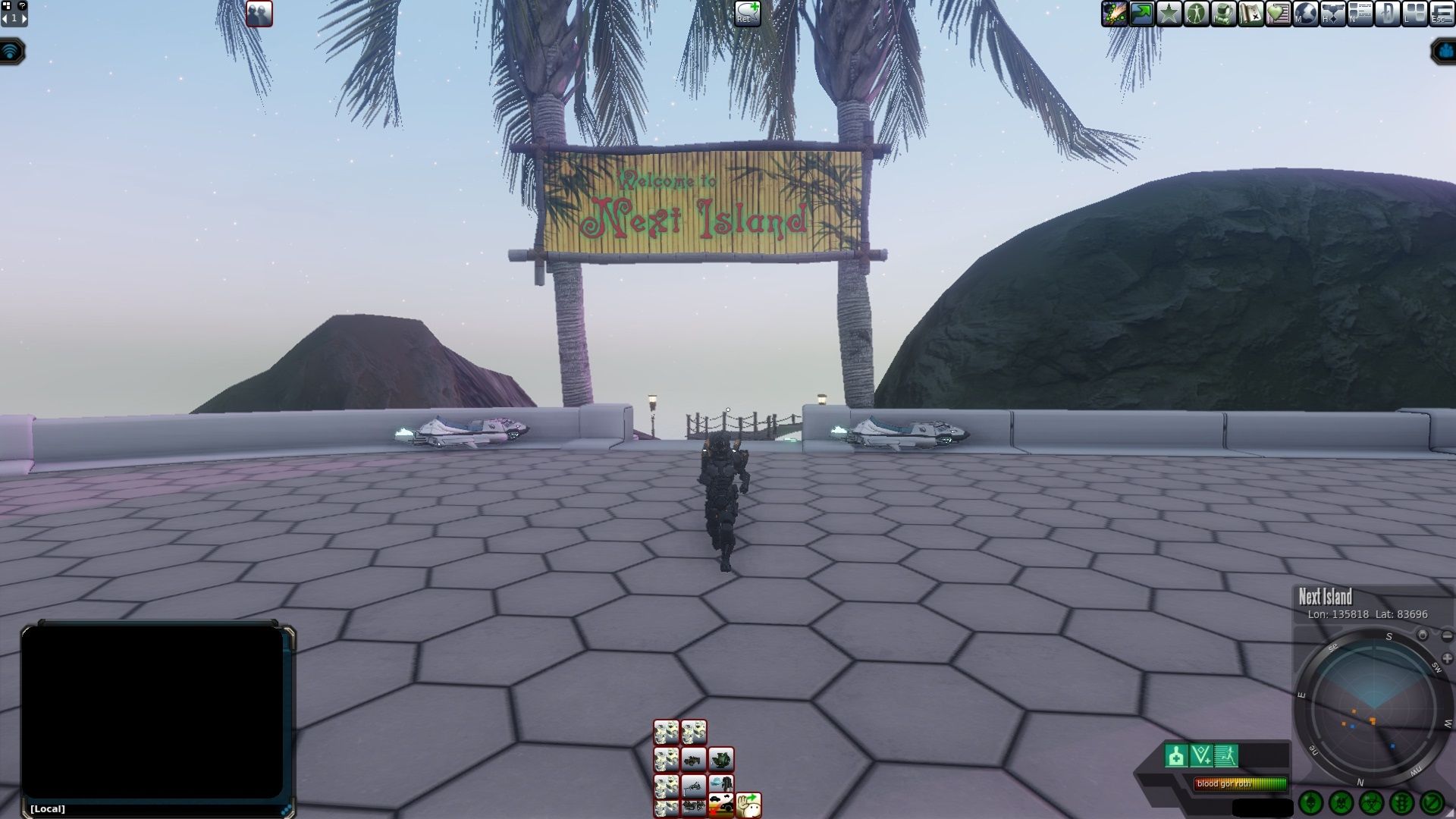 Once you arrive at Next Island If you look South-East South you will see a nice Welcome to Next Island sign. 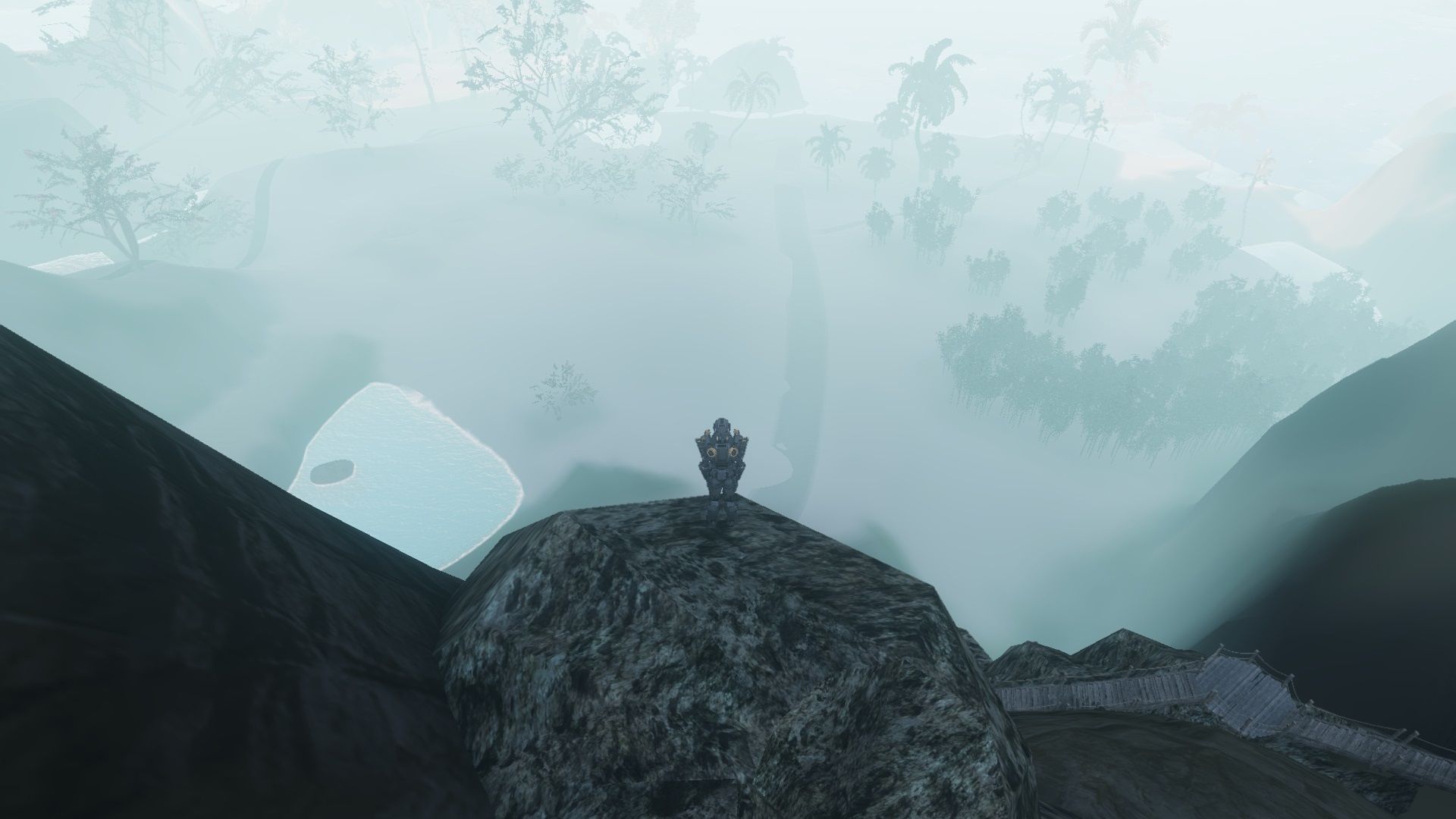 This takes you on a rather scary walkway down a massive cliff. Do be a bit careful as the stairway and railing are a bit sketchy at certain spots. This gives you a fantastic overview of the valley below where you will be spending a little bit of time. 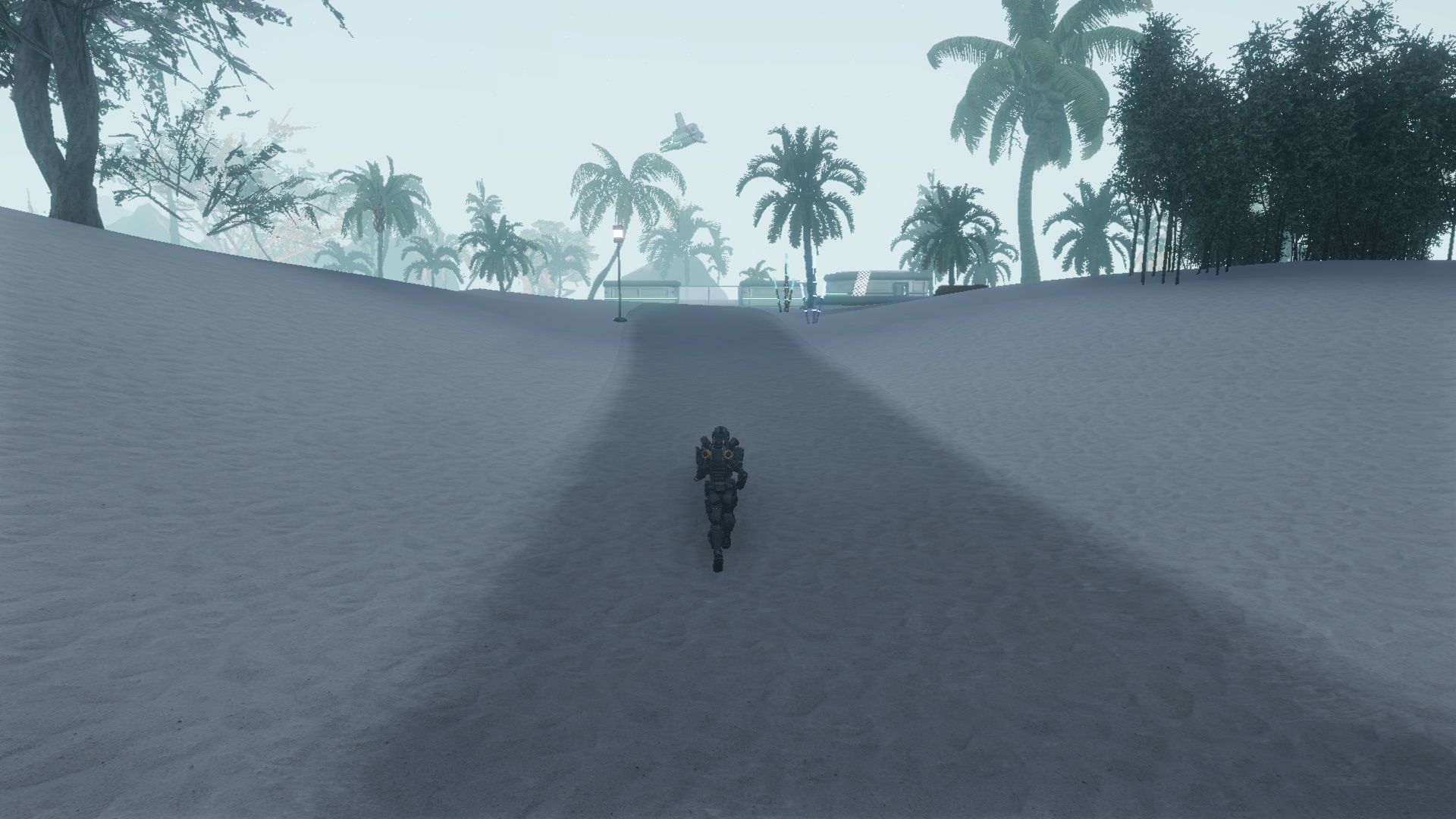 Once you make it down safely if you keep following the road you will be led into a small village. Here you will find a lot of starter missions to pick up for doing different activities while on Next Island.

This small village which can be around (135917, 83384) has everything nice and laid out. You will find all buildings are labeled. While talking with the NPCs here they will give you some basic information about how to do things different things and the items needed to do so. Talking with the Crafting NPC at (135914, 83361) and completing the quick mission by just chatting will give you Lesser Elysia Blueprint. Next Island is quite big on blueprints so it is already important to hold onto any you get as rewards. You never know when you will find yourself needing them. 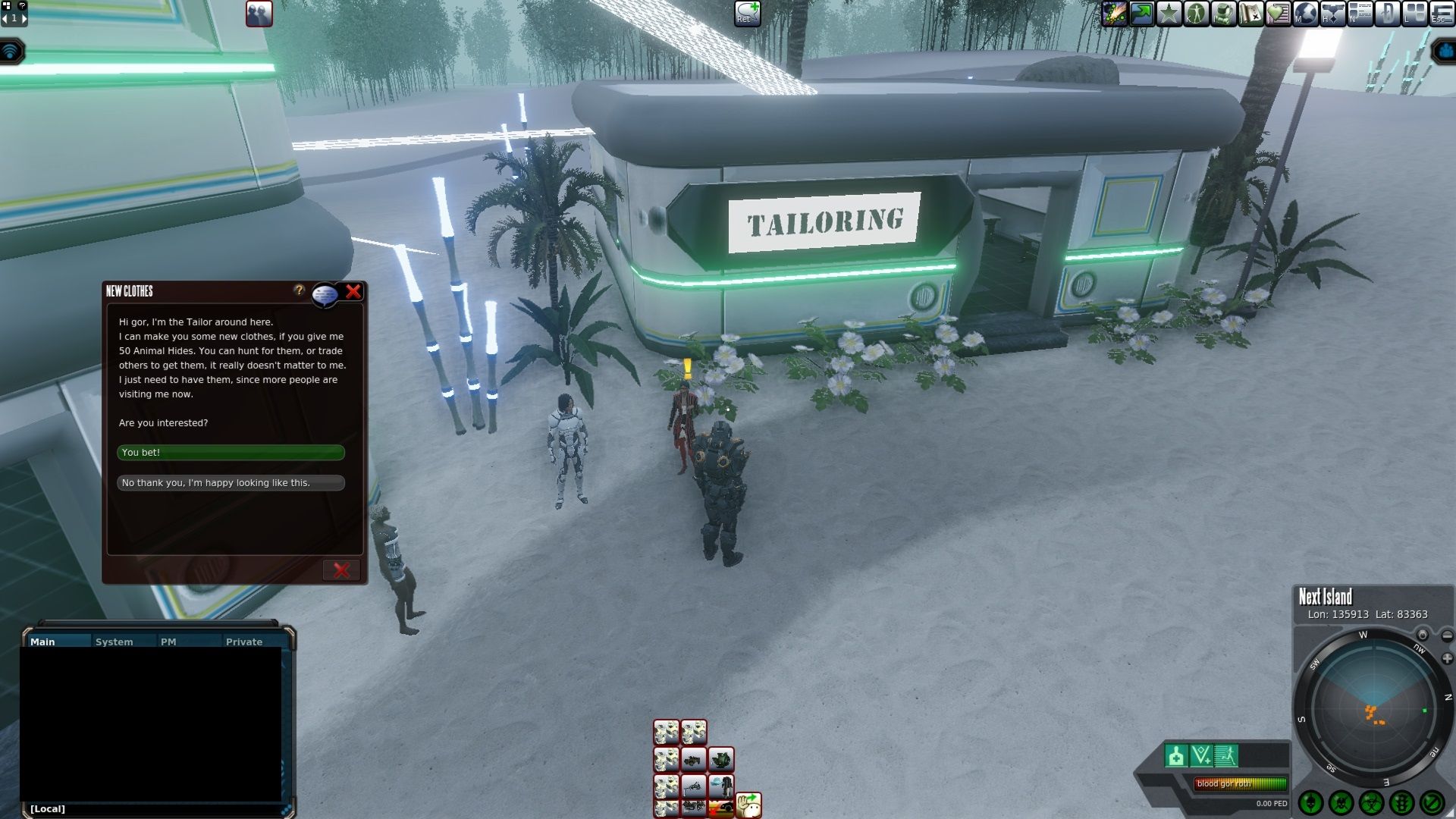 A couple of NPCs here have missions that are going to request you go and do something or bring them something back in return to finish the missions. The NPC outside of the tailoring building (135913, 83363) for instance wants 50 Animal hides for the mission New Clothes. You will find animal hides as quite a common drop on Next Island.

Once you do get 50 Animal Hides from hunting different creatures on Next Island. You simply return and turn them in. The reward for doing so is a Settler Suit that you can wear. 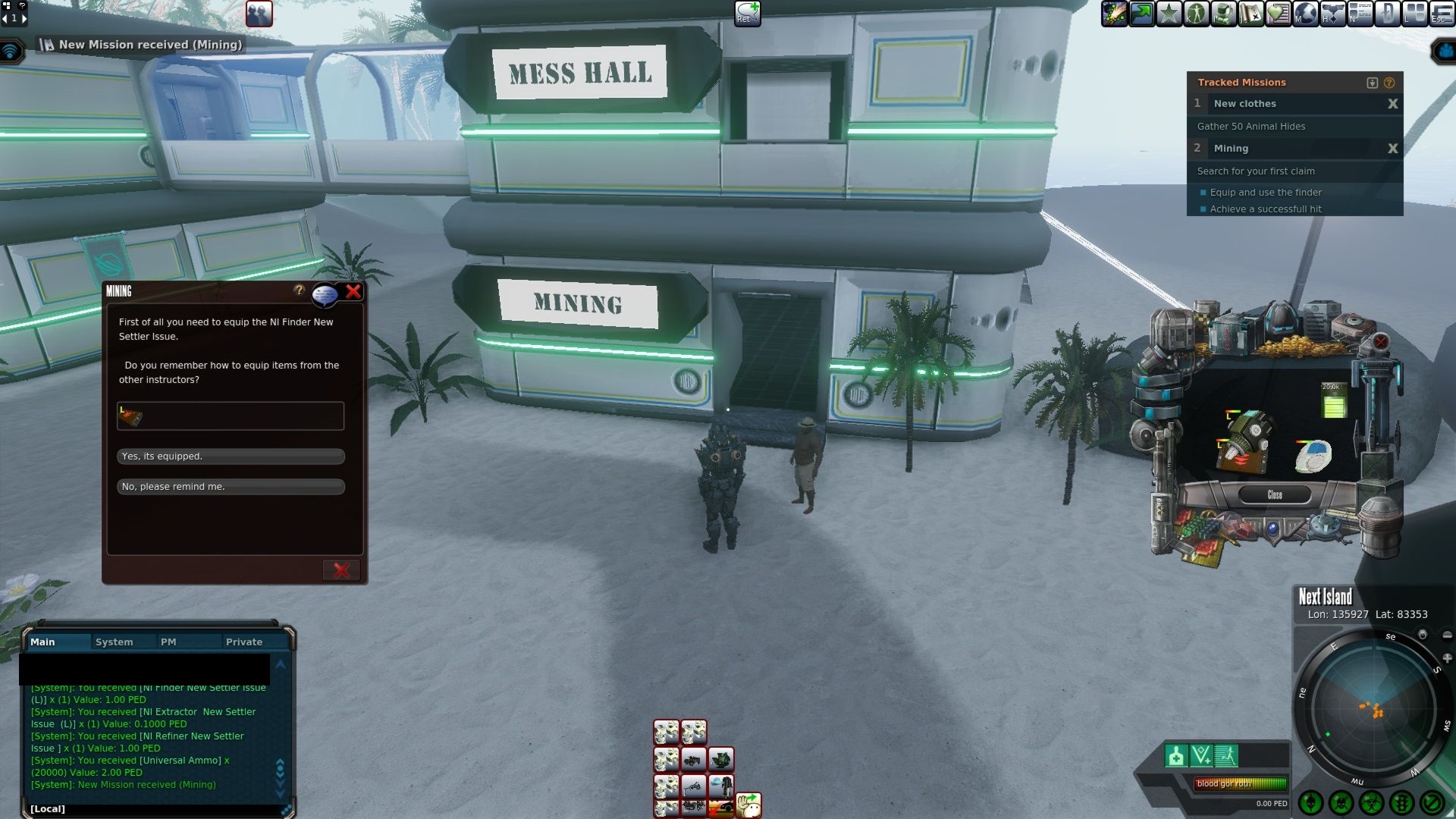 Talking with Herbert the Mining Instructor at (135927, 83353) outside of the mining building will give you 2 PED in Universal Ammo, 1 PED in NI refiner, and .1 PED of Extractor. Along with 1 PED NI finder that some choose to not use and sell for a higher markup on different planets.

Once you get the mission itself it wants you to equip the finder and find a claim mining with it. For me at the time of doing this, it took a few claims for the mission to complete. You also don’t get anything special for finishing the mission as far as I’m aware.

So mine where you like if that is something you do. Otherwise, enjoy 2 PED of universal ammo. Keep in mind starting items have zero value to a vendor so even if you don’t mine now you might as well hold onto these as having an extractor and refiner is always nice to have to incase the need ever arises. I also have a mining guide for those that want to check out this profession further. Along with a few posts about mining on other planets. I dropped a couple of probes in the local area on my way to the kill mission you can get. Once I found an ore claim I got a pop-up giving me some simple instructions on the next part of mining with extracting the claim. 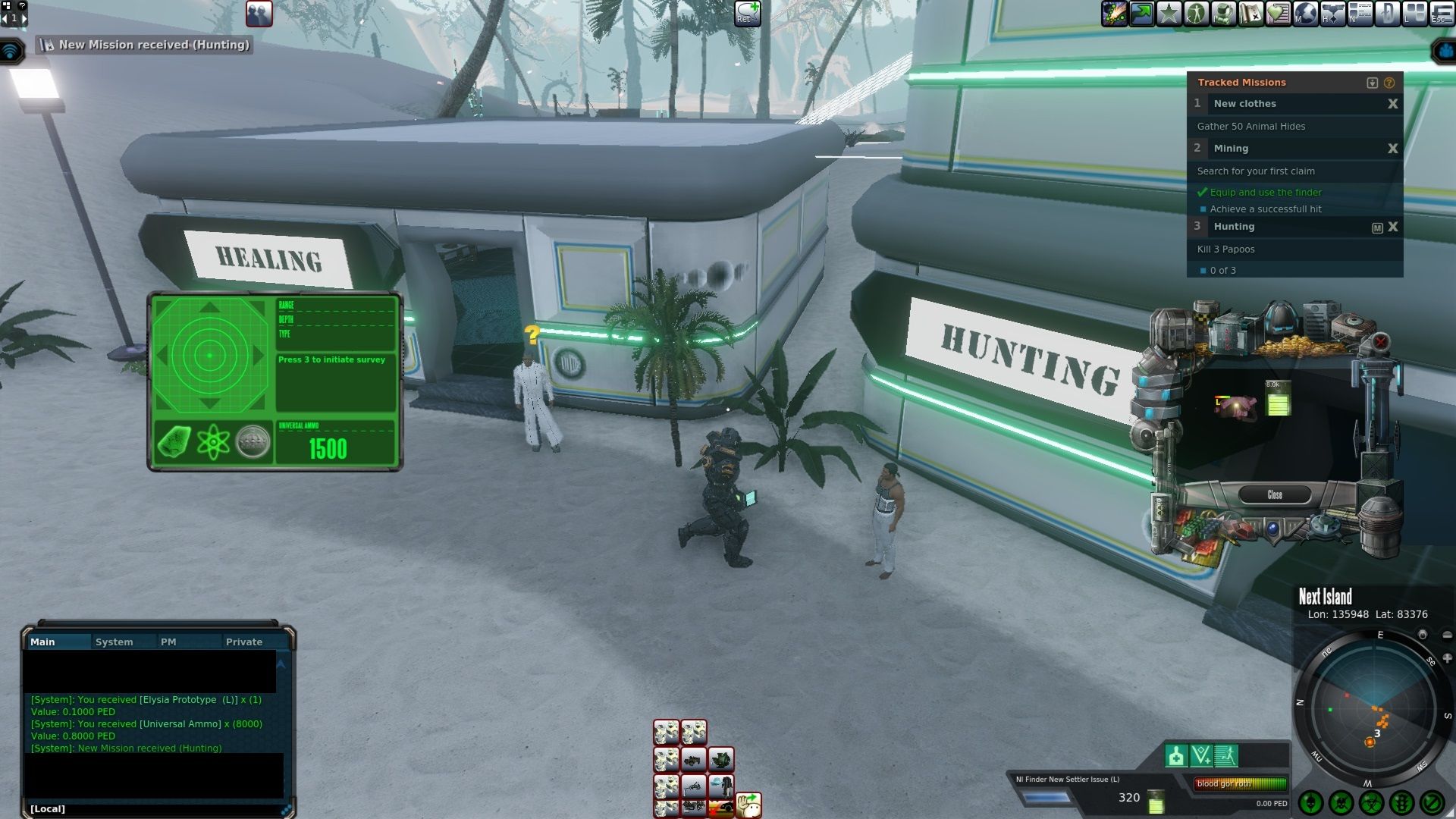 Outside the hunting buildings at (135947, 83374) you can get a mission to hunt 3 Papoos which you pass by some spawns of them to get into the town.

To get you started with this mission they end up giving you a special gun for the mission that has .1 PED worth of uses and .8 PED of Universal ammo. More than enough to finish off this mission. Doing so gets you nothing extra. The location of the papoo to hunt will also be shown on the map and can be found at around (135858, 83383). They are level zero and easy to kill. I choose to use a different weapon but it’s all the same. Be careful it can be easy to get aggression on multiple of them at a time.

Talking with Li the Healing Instructor outside of the healing building at (13590, 83380) will give you a free NI herb box that has .05 PED worth of healing remaining on it. While the item is (L) for limited it will be more than enough for a starting player to do a basic hunt with. 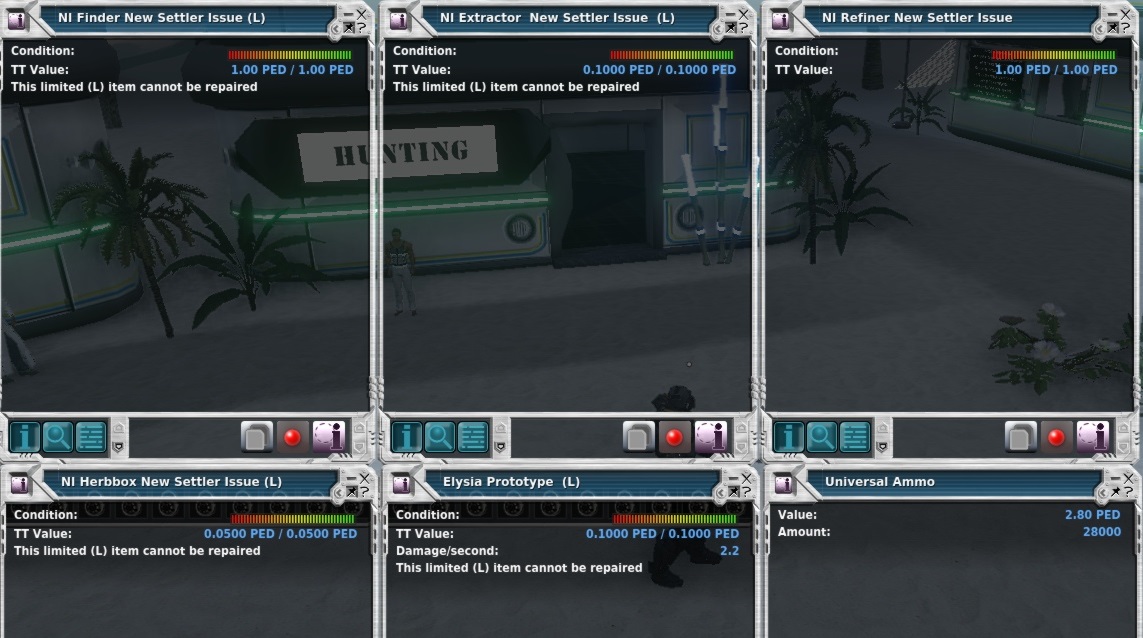 Just talking with all the NPCs within a small area outside of their buildings and doing nothing else will net you all these items shown in the screenshot. This includes 2.8 PED of universal ammo that you can use for quite a lot of different things to more task-specific items like a starting weapon that only a couple uses worth of value remaining. This is however not the only mission in the area. You will notice on a rooftop at around (135935, 83343) is an NPC named Jamie the Chef. There is a ramp behind the buildings going up to the roof. He will give you a mission called Feeding the People. This sends you on a bit of running ernes around the place. 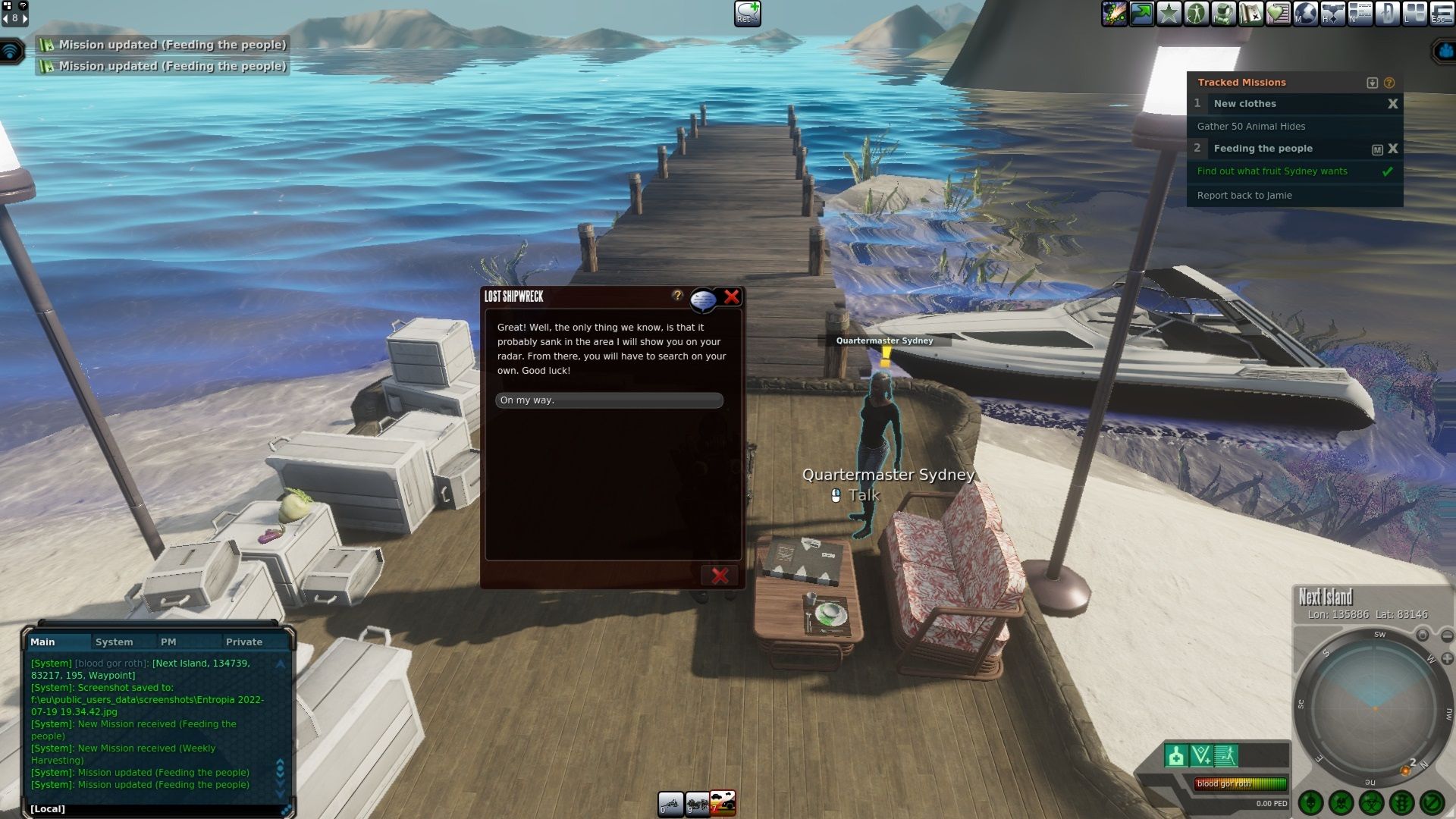 In the Feeding the People mission you will end up needing to talk with Quartermaster Sydney who can be found at the docks at around (135886, 83146). Once you get a mission update for Feeding the People you can return to Jamie the Chef.

Quartermaster Sydney will also give you a second mission you don’t need to worry about for now called Lost Shipwreck. It is a bit of a higher-level mission that I’ll be covering over in detail in a later post. Once you return to Jamie the Chef to finish the next part of the mission. He will give you another mission called Daily Scouting Resources Mission. If you are someone who enjoys gathering fruit, stones, and dung this is a mission for you. If you have no idea about fruit gathering I have an entire guide that goes over a lot of things in detail about doing that active in Entropia Universe

This is just one of many low-level things you can do while on Next Island. In my next post, I’ll be going over a few different other locations for missions for further low-level activities.