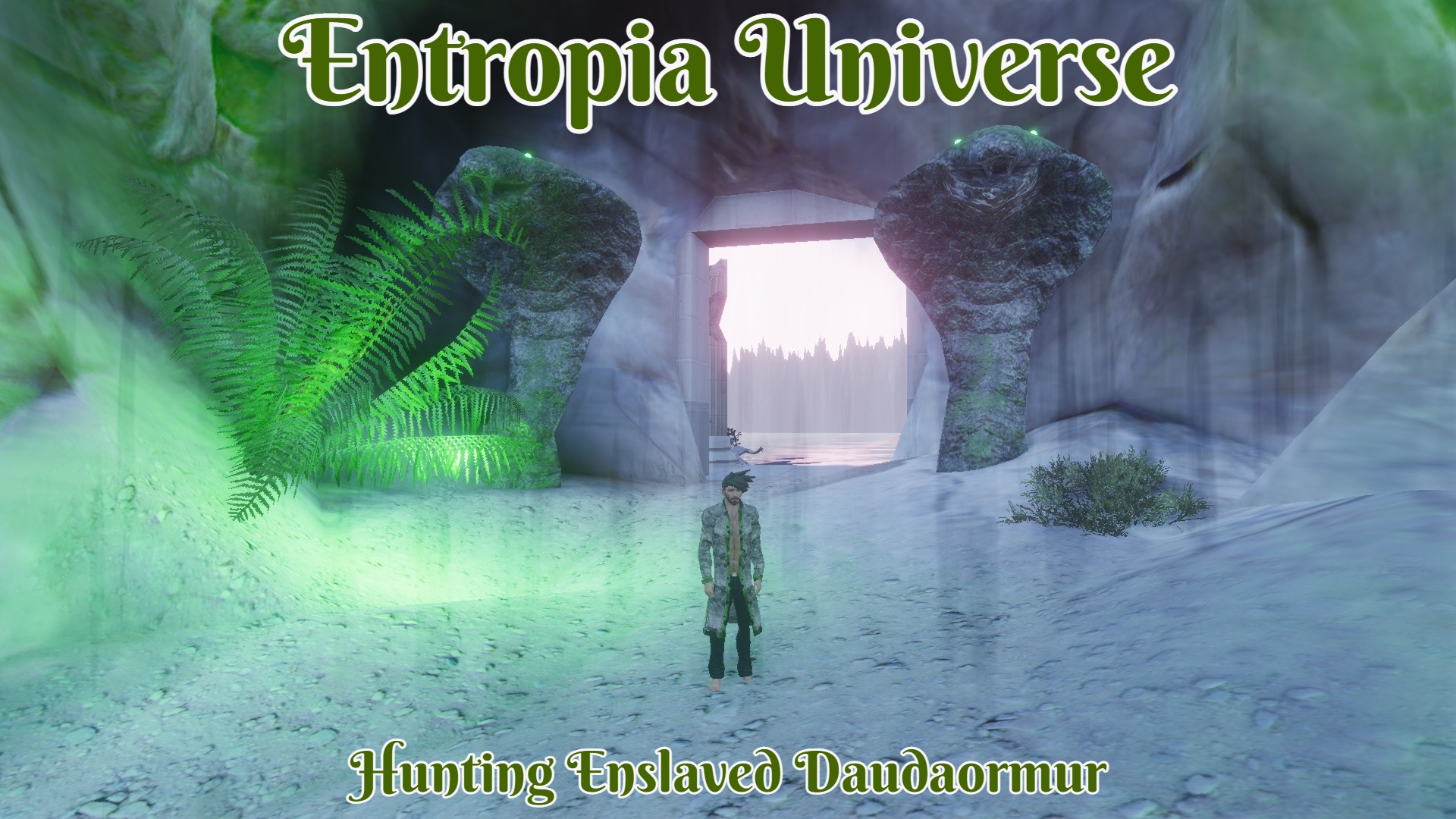 Once you are done with the early part of Deliver us from the Dark Queen mission chain that makes you protected from the poison in the Gorgon Arena you can enter safely. If you have not done that yet read my prior post regarding the matter. The next part requires a lot of grinding. 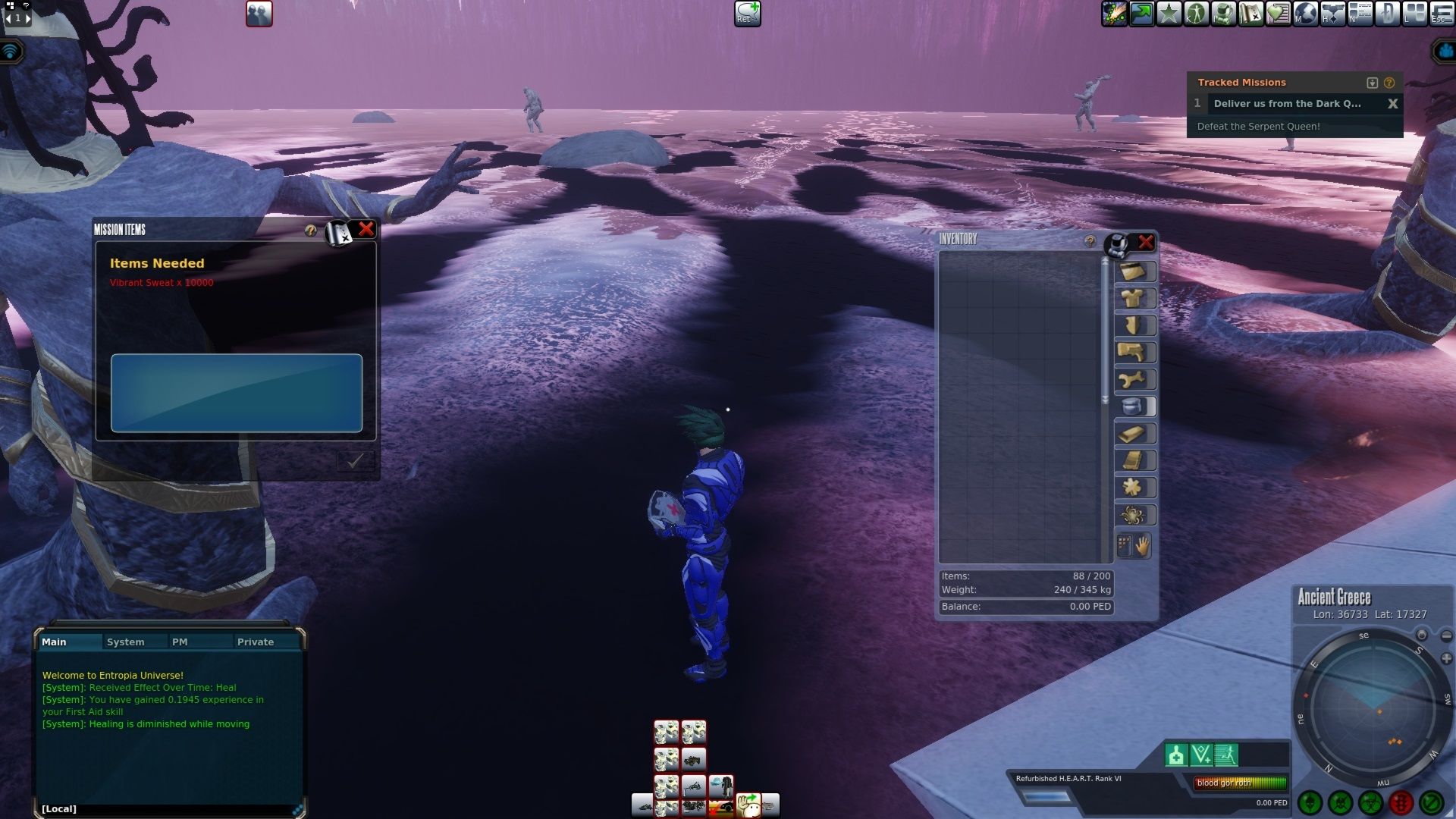 When you enter the arena you will notice some Gorgon snake statues at the start. One of them will require just 10k sweat to be donated to start the event. It then locks till the event is over. The other one requires a lot more items and for you to be beyond the scope of these posts to be able to start.

The good news is if you trigger the event (I’m not sure if others get the buff as well as I did this solo when no one was there) you get a small heal over time for one hour.

You will lose this buff on death so be careful. With Gremlin armor and 5B plating along with an Armatrix LR-35 (L), I found buff was doing just about enough healing for me when hunting mostly Young to Old Enslaved Daudaormur. The wave event itself is a shared loot event. I found at least for the first three waves I run these for that you have one hour to finish each wave by racking up enough points. Once you acquire enough points you move on to the next wave. So do expect to spend some time here and bring lots of ammo.

Do be careful with the respawns. I found myself in a bad spot when the entire arena respawned while I was soloing the first wave. The Enslaved Daudaormur will also spawn a couple at a time as well. So it’s best to find a decent spot along the wall and play it safe.

You might notice a lot of players will log in every 30 mins or so. If the event is up they slaughter everything. If it is not up they will log back out. As they are trying to avoid having to pay the 10k Sweat fee to get the wave event going.

At least when I did this late at night. When another player did show up they usually waited for me to have finished around 80% of the first wave by myself. It was also clear to them by my clear speed and armor that I would not be going that far into this event itself. So that was kind of them to let me have a lot of kills since I paid the fee to get this started. I lucked out just a couple of minutes into the first wave to have looted my first Serpent’s scale. These armor platings are quite nice. With that much acid protection and impact alone I could see myself having some uses just for the base tier of these plantings.

The first wave event will mostly have Young to Old Enslaved Daudaormur. With an Armatrix LR-35 (L) I would say I felt I was on pace to just finish the first wave in time. It would have been a close call. Someone else did join in towards the end which ensured we would be getting into the next wave of the event. Not that long after getting my first scale, I looted a second one. For the rest of the event, I would not find any further ones. I must have lucked out quite early on to have found two. For now, I’ll be holding onto these perhaps when I get a slightly better gun I’ll be returning trying to get an entire set. Around halfway, through the first wave, I ended up looting my first piece of gorgon armor. I was thrilled it was (M) so I could wear it if I wanted. This stuff has decent acid, burn, and cold protection which is something I’m lacking in the armor sets I own. So I’ll be holding onto this stuff for sure and perhaps buying the rest just to finish off the set. 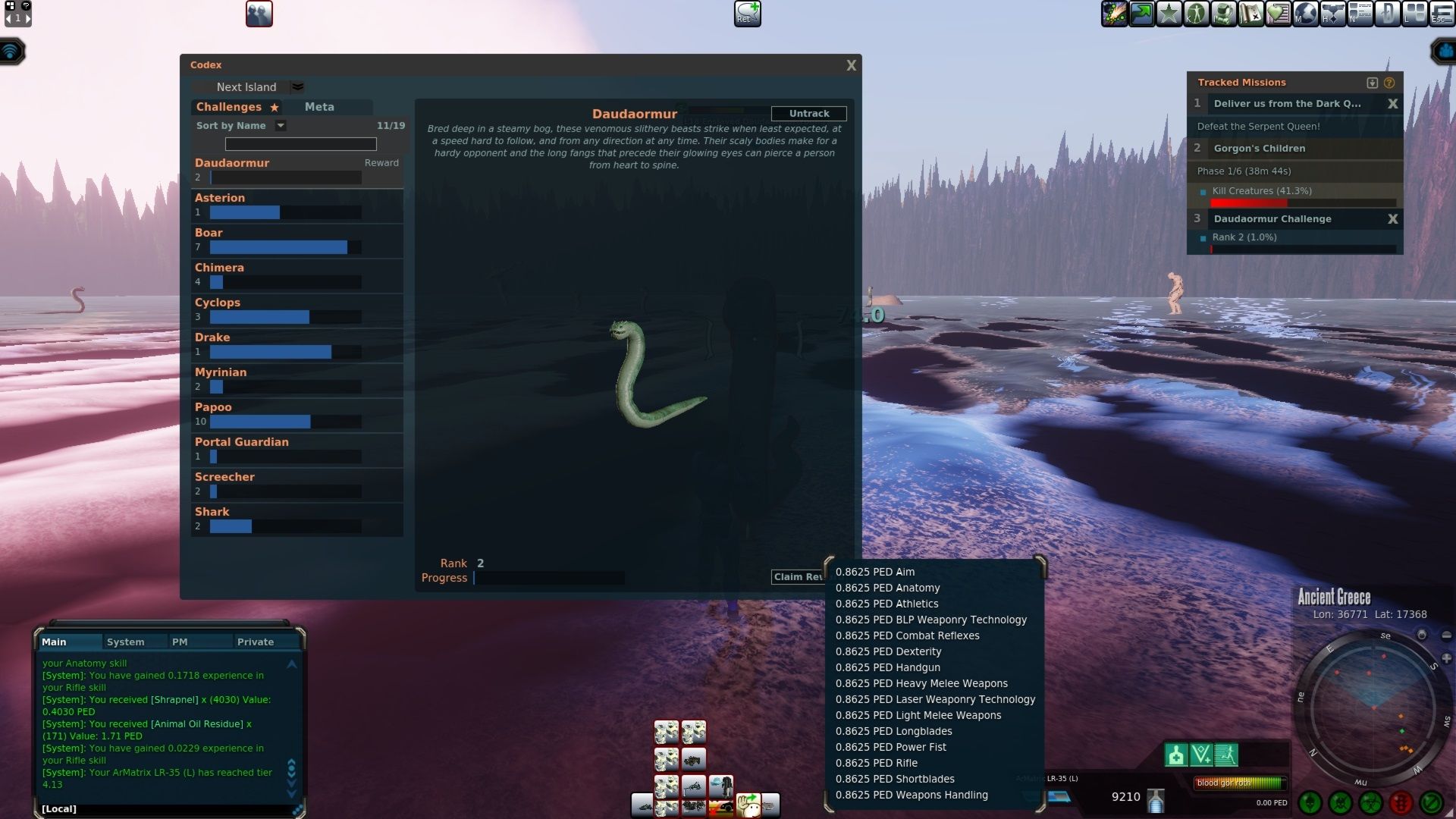 Daudaormur also has a codex you are working on while killing them. Just the first rank of it alone was decent. If you are going to end up grinding the daylights out of these I can only imagen how amazing the codex will get. 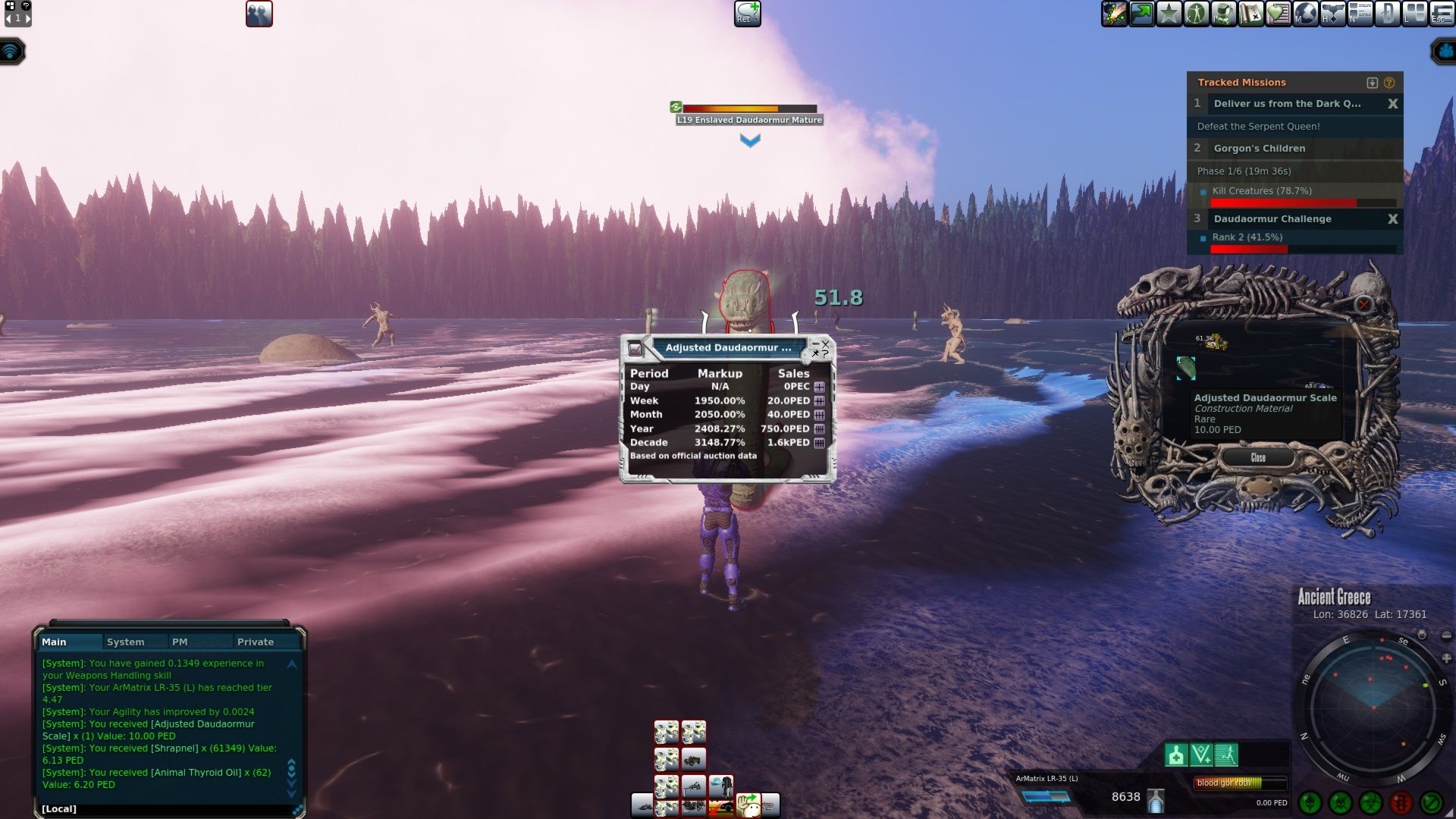 Towards the end of the first wave, I got extremely lucky. I thought I had gotten an actual HOF. Then I looked down and notice I only looted about 24 PED in TT. It turns out Adjusted Daudaormur Scales trigger the rare HOF daily leaderboard. This stuff has some insane markup around 2000%. Hopefully, I can find a buyer for it otherwise I might turn in the two scales I looted and make the next tier up of one of these plating. 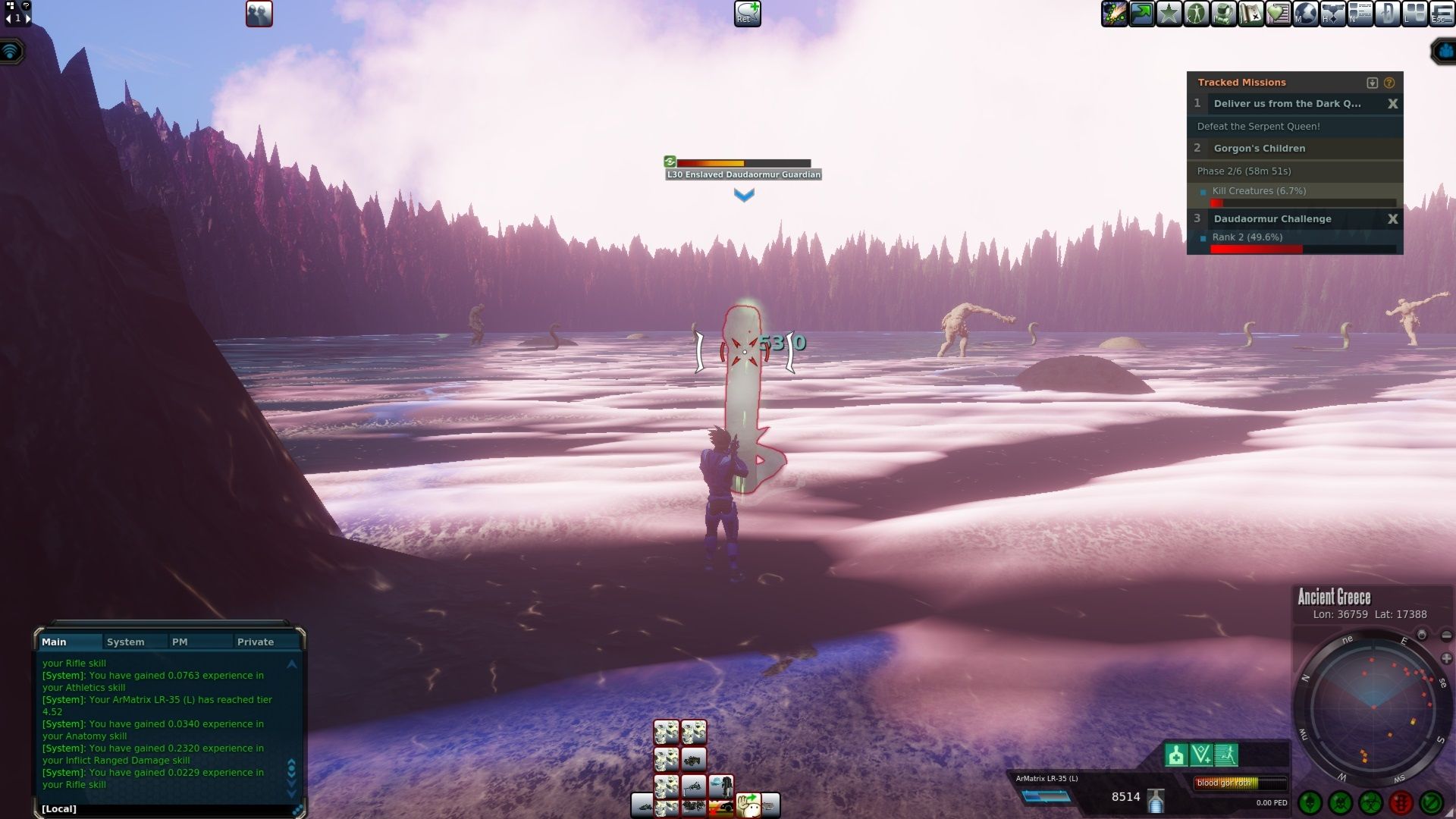 In the Second wave you can still find lower-level Enslaved Daudaormur you will, however, start seeing a lot more Providers and a bit bigger. While I was able to kill something like the level 30 Guardians those required a lot more healing and at least for the setup I was wearing it was not ideal.

It is also a good idea right before the next wave will start to make your way back to the entrance of the wave event arena. As the next wave spawns in quite quickly and unless you handle a few of these on you at once it’s best to play it safe. 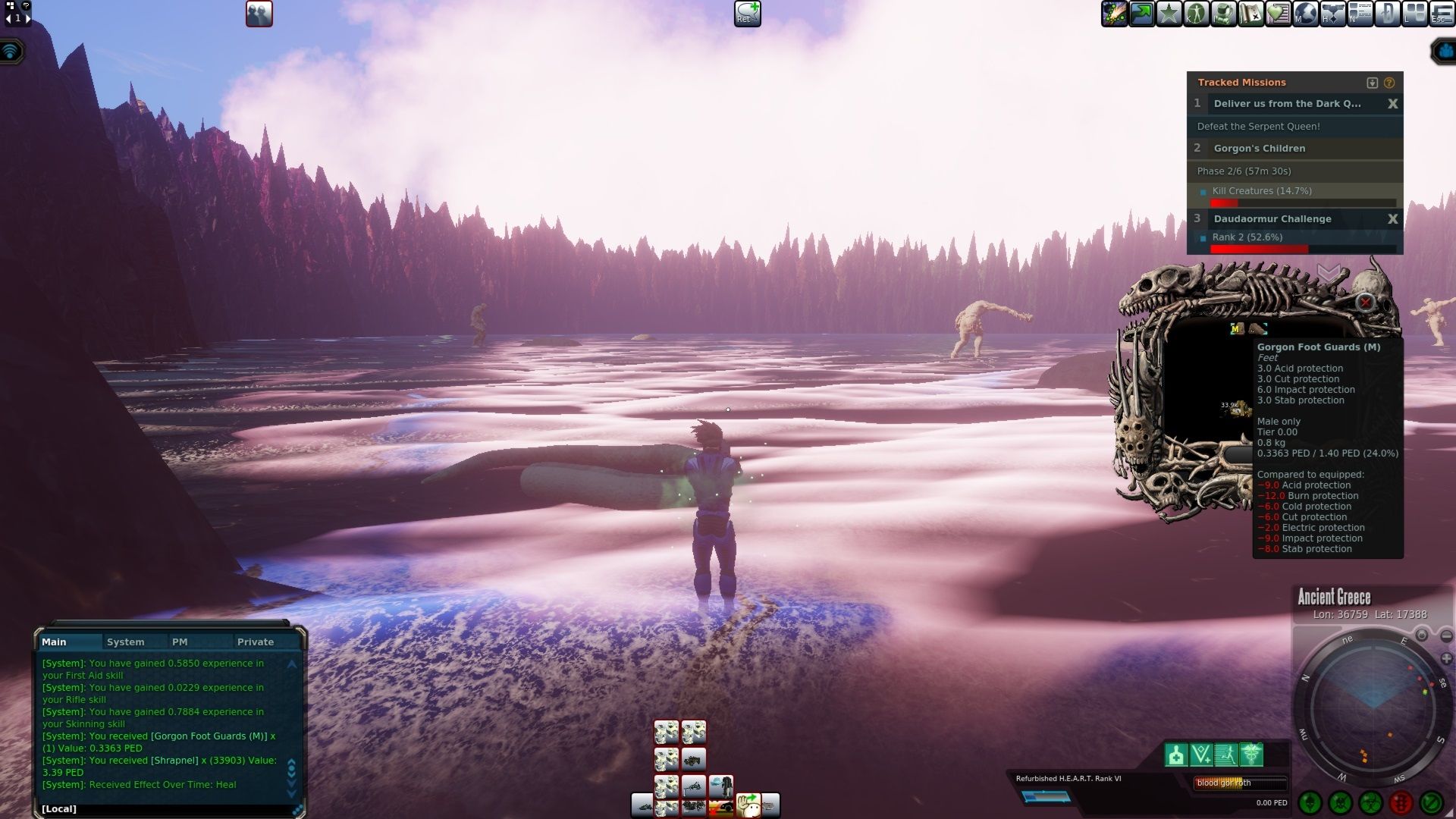 I ended up looting one more gorgon armor piece. The armor pieces themselves don’t have much markup left in them these days. While it was tempting to leave with how much ammo I had already burned I was quite intent on seeing how far I could last in the wave even itself.

The second wave had a lot more Daudaormur Guardians in it. Making it a bit harder to just pick off the young to old. Daudaormur in general can be quite annoying trying to target and they move around quite quickly. Adding to the challenge of trying to get what you can easily kill and stay in an area along the wall. Perhaps if this place was more packed like it is during the day and everyone is just shooting everything since they are shared loot. Maybe I would have stuck around. However, I would have gotten massively out damaged and I just don’t like my odd if anything decent dropped of getting it in the kind of situation.

While you could work with other players in there. More times than not a group of players will show up to try and ensure if one of the rare drops does drop their group is at least getting it. Leaving the later stages or when the arena is crowded hard for the solo player to get much of anything. This is meant to be done with a team. 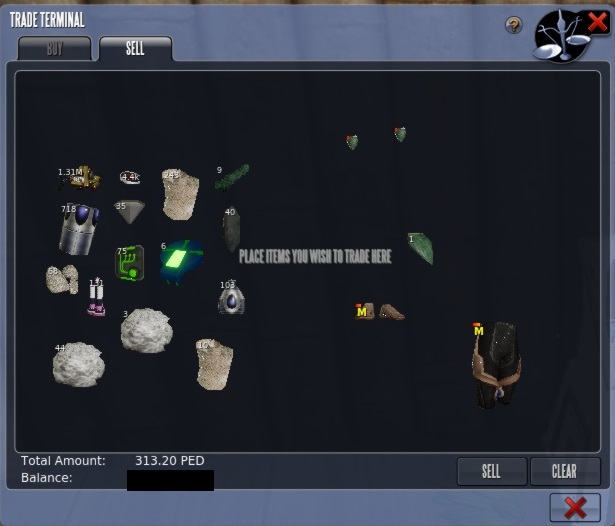 Do also expect this to burn a bit of a hole in your PED card and require a lot of ammo. Thankfully the first wave I got to mostly solo myself I ended up getting 1 piece of armor and 2 serpent scales and that Adjusted scale. The markup on those covered the cost to buy 10k Sweat and my large losses in TT.

In total, I went through over 500 PED in ammo and I was not doing the bulk of the killing either except for the first wave which I might have been at around 300 PED of Ammo used. Thankfully I lucked out and ended up looting an Adjusted Daudaormur Scale which I sold for over 2150% markup which is ~215 PED total.

The Adjusted Daudaormur Scale is used for upgrading along with a few other materials serpent scale plating into Adjusted. The NPC to do so is down there in the hallway before you enter the arena itself. These scales tend to sell for about double the markup of the ones used for upgrading armor. So I lucked out.

If however, I wanted to try and get a full set of armor and plating myself and upgrade I feel like I need a lot higher level weapons. This will require a lot of PED in ammo to be spent trying to get these things. More than my budget of play will allow at least for now. This is why many players choose just to buy the drops of those who farm this thing daily.

Outside of the rare HOF swirled for finding the Adjusted Daudaormur Scale I did not get any globals. While I was quite happy with the markup on the item itself I was hoping the HOF was going to be worth a lot more than that. So I could keep trying to farm further with it covering further my costs.

It is however clear this wave event is geared towards those at the higher end of the game for players looking to invest a lot of money and time into getting full sets of gear and plating and upgrading them. It was at least however fun to unlock for now and get a couple of the drops. Perhaps one day I’ll return and see how many far along I can go with some better damage.