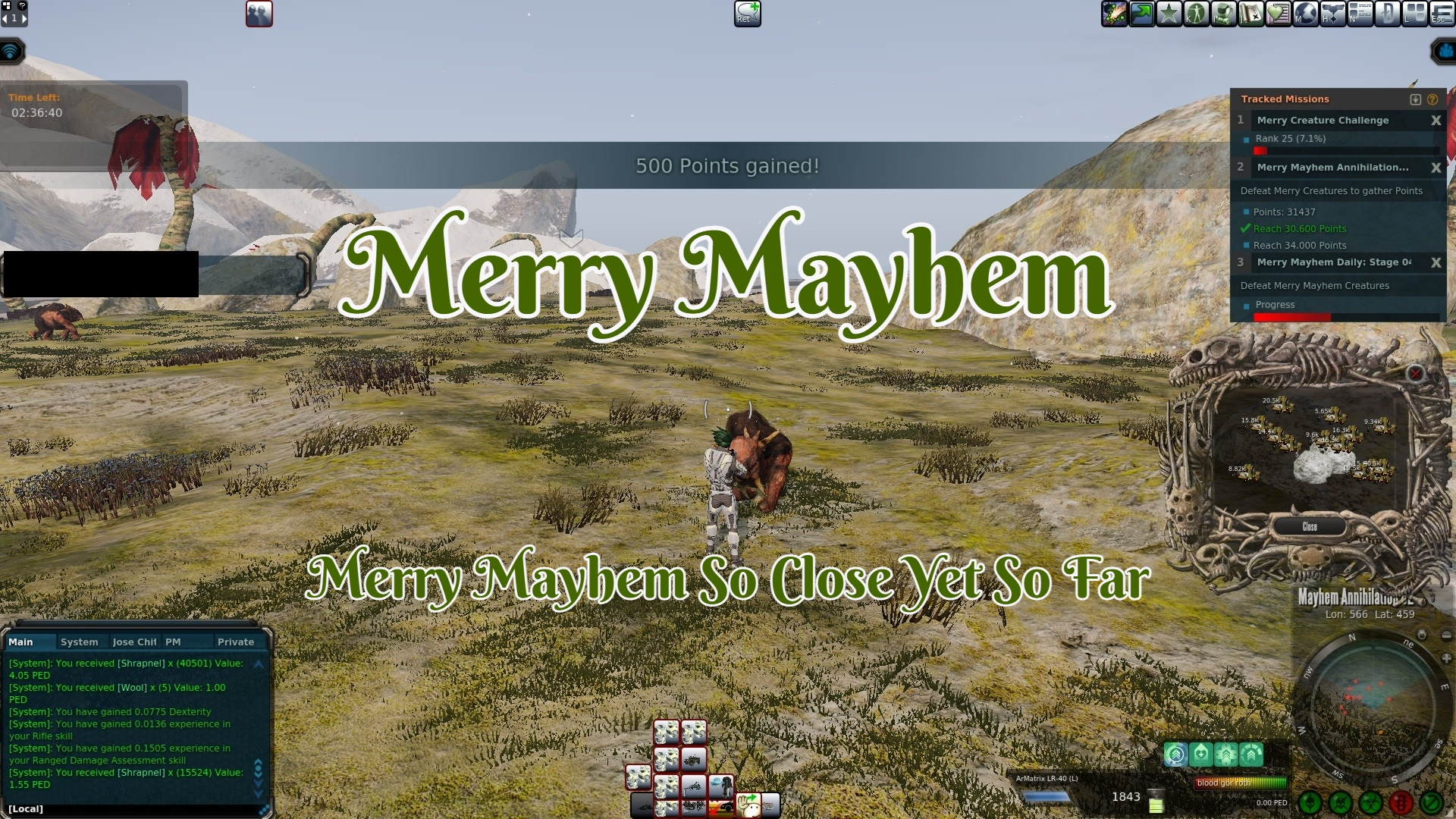 This ended up being over a couple of days where I lacked the time to put in a decently long grind to stick to any one instance for the full five hours. The results were rather shocking as I ended up racking up a few quick big point gains throughout it all.

It’s always nice even when you are short on time that things just end up working out in your favor anyways. I knew I would not be getting any 5 hour grinds in let alone back-to-back long sessions like I have been doing up to this point for the Merry Mayhem event.

It was also starting to sink in at this point just how close I was getting to finally being done. If I’m still playing next year I’m not quite certain I’ll be going for Silver again unless I get a few large gun upgrades. As the amount of grinding, I’ve been doing given that old-school MMORPG feeling. That kind of feeling some days I’ve missed and others I’m glad more modern days games have moved away from it for the most part.

The first half an hour of the instance was rather dead. Nothing exciting happened. I was expecting to hit some no-global long periods. The game however said not today. With me getting a nice 97 PED global just a minute after half an hour of being in the instance.

I ended up killing the first two bosses of this instance without anything that exciting going on. There was a single 53 PED global off some trash and that was about it. At least I was slowly gaining a couple of Mayhem Tokens and strongboxes here or there. 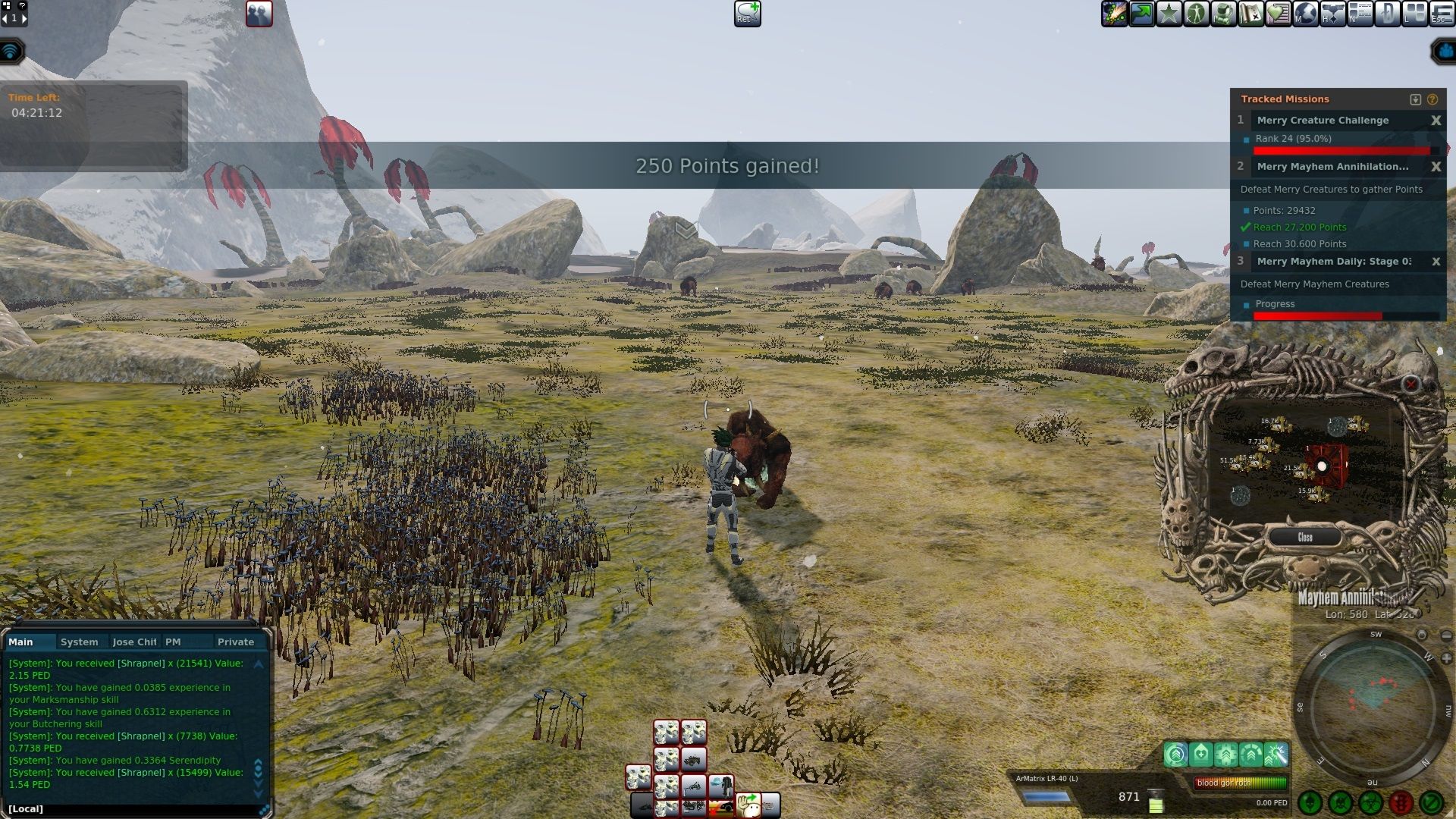 Over an hour and a half into the instance, I got a decent 250-point gain kill. I’ve yet to get the max point value from a single kill yet. This has been making grinding out the Merry Mayhem event a lot longer than the Halloween event as at least in that one I had acquired the top points a couple of times to speed things along. 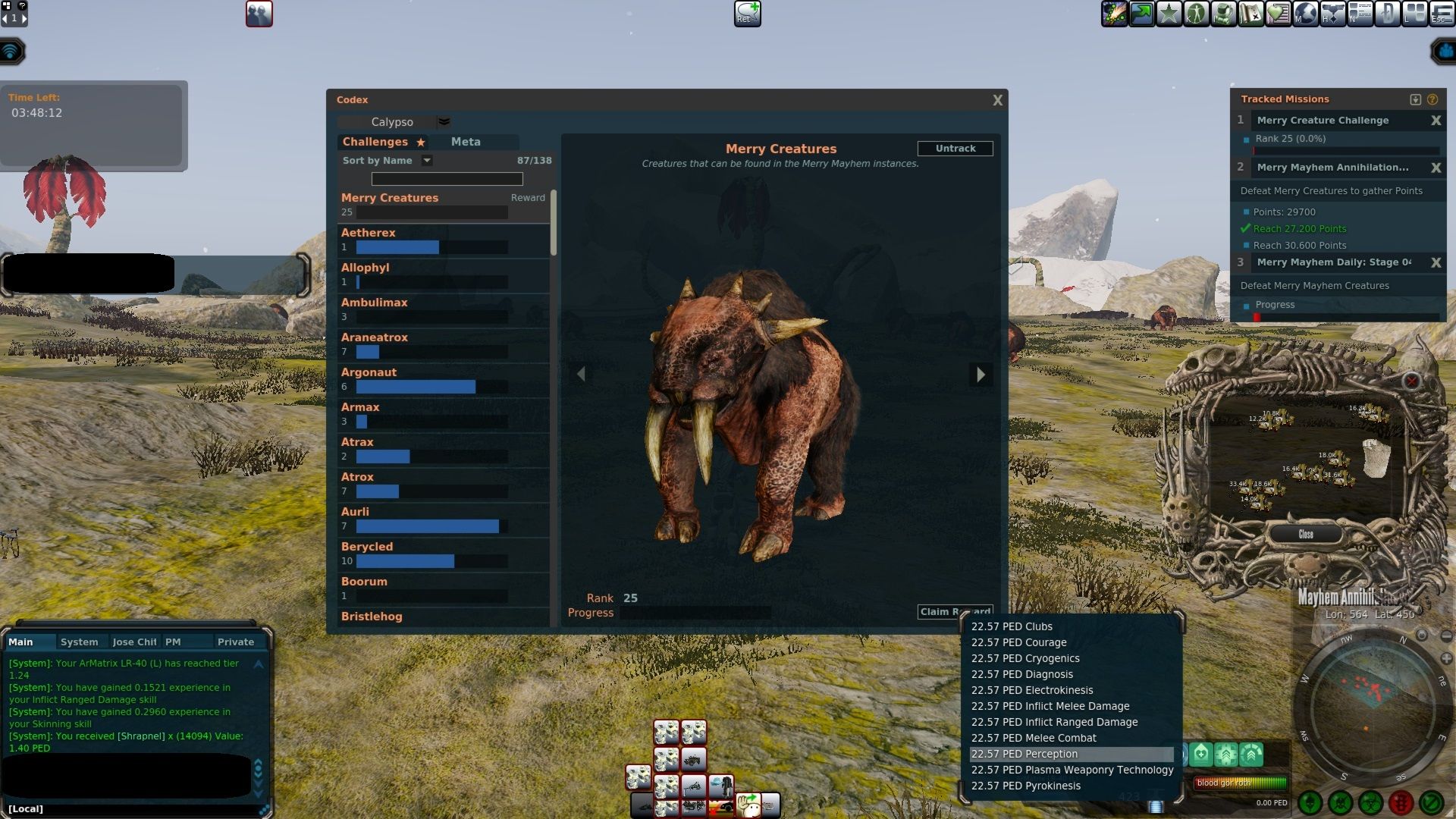 One huge thing I was rather excited about this run was getting to rank 24 in the Merry Creatures codex. I ended up picking up 22.57 PED of perception granting me 209 Perception. I had no idea just how long the grind for rank 25 was going to be. Needless to say, it was going to be a while before I would hit it. 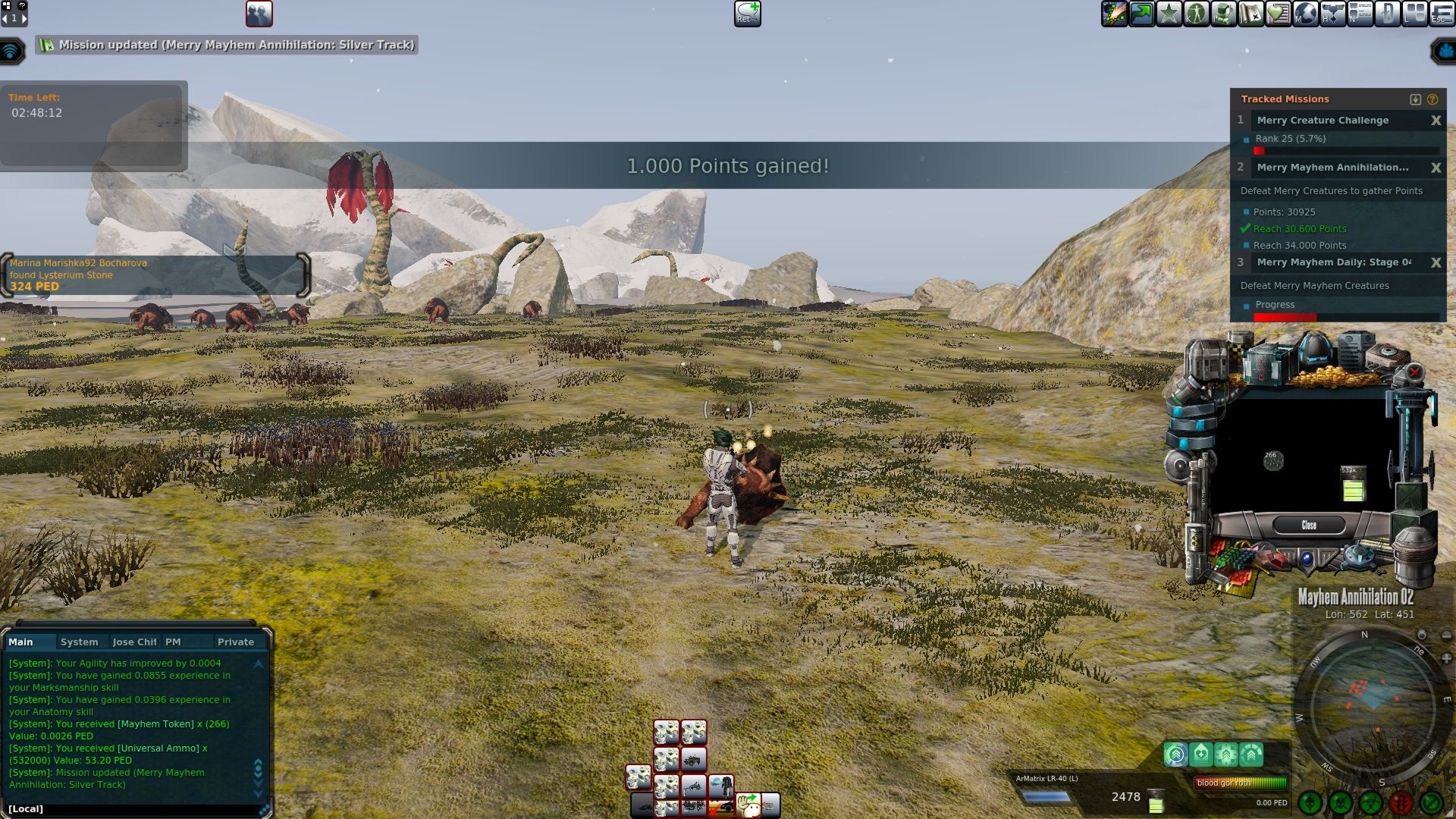 As has been the case a few times now while I was getting close to closing in on the next rank of Merry mayhem Annihilation for silver I got a massive 1k point kill. Thrusting me past the point needed to finish off.

This was not the last of some decent points I was going get out of this instance either. Not even 10 minutes later I got 500 points as well. Even the boss I had killed after that was awarded 100 points. It was almost like I was going to finish this thing off shortly and be done with it.

The game however had some other plans. In the rest of the instances in which I did not get to run fully, I struggled to even get a couple of points. Once I had finished off my Daily stage 4 for the day. I decided to call it. 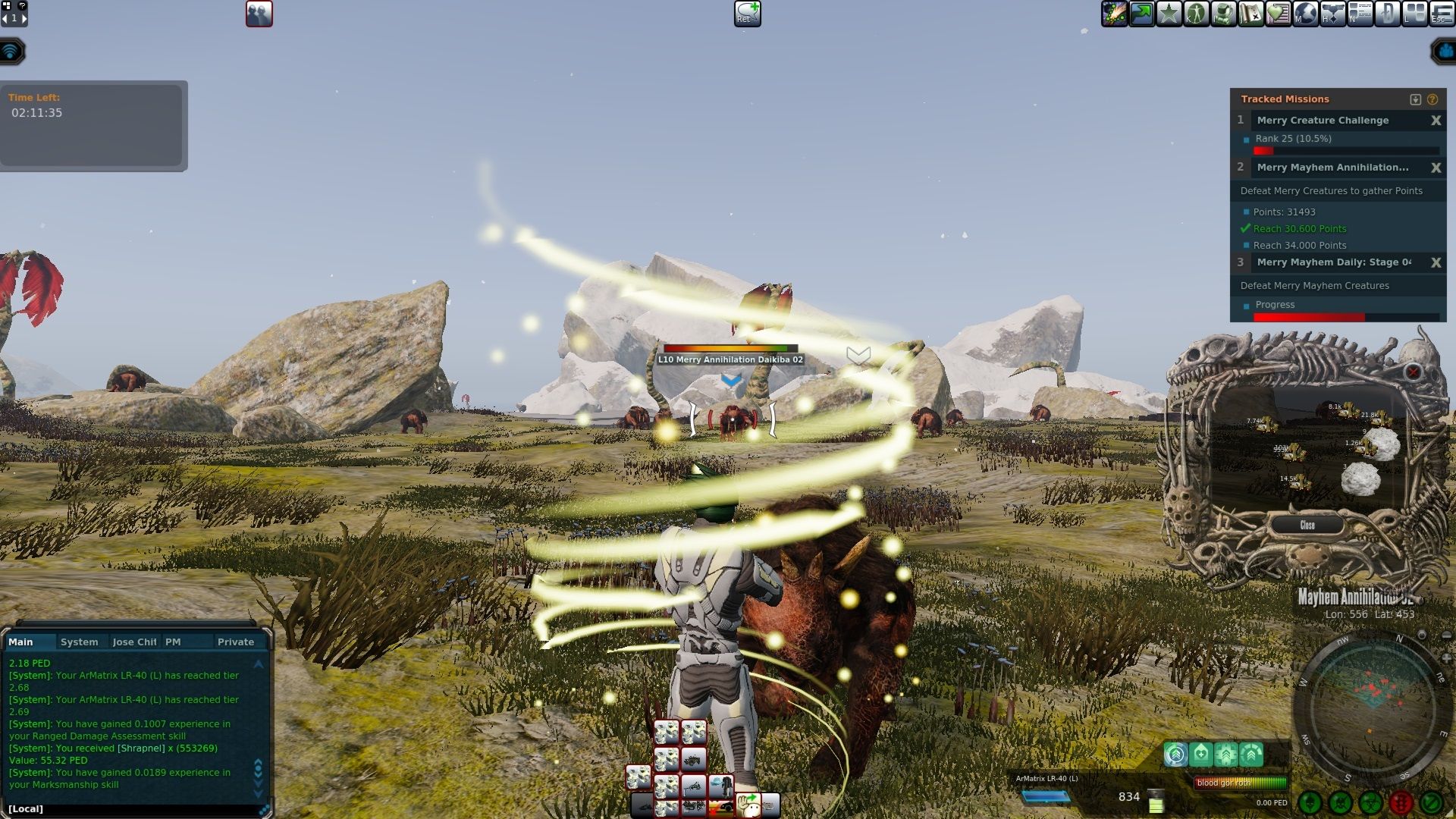 I’d come back the next day for a very short amount of time to grind with getting little progress in gaining points. It seems the last few thousand points I was going to need in the game were going to make me grind for it.

The quick ending I was hoping for was just not in the cards. That was not the only thing either. I had reached my limit for how much I wanted to spend on this event. I decided since I was so close anyway I was willing to go over that spending limit I had set early on.

The math I had worked out based on my performance in other Mayhem events was just not holding up. Both in terms of gaining points and the expected return from the loot I was getting. It appears I was just having a few too many bad runs and I was going to need some kind of insane finish to overcome that at this point.