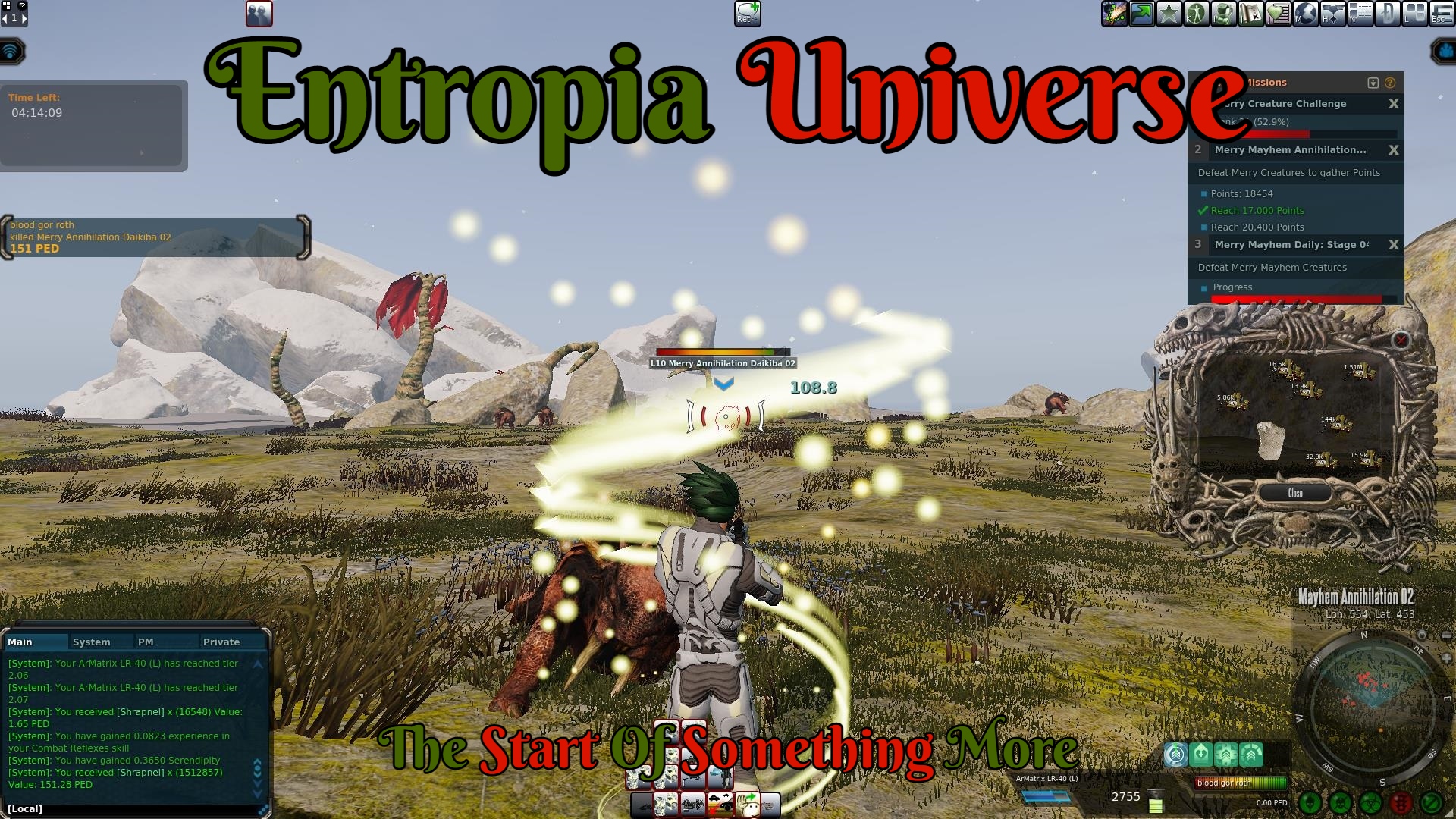 This session ended up being a warmup to something even greater. I knew if I stuck it out at some point something had to give. While it was not as great as I had hoped it was at least the start of something more.

I had plans for this to be a decently long grinding session. Not even three minutes into the first instance of the day I got a global. While it was nothing massive at just 53 PED that sure sets things up going into it. It was such an early global I was still getting set up and did not get a proper screenshot of it. I had just a couple of shots left from the last run I was planning to burn through. Then I would reload up on ammo, make repairs, and so forth.

The points were also starting to roll in. While nothing massive right away. I did notice I got several 50s and a lot of 25 and 10-point kills as well. This was nothing like I’d been dealing with it. I started to have some high hopes for this one. 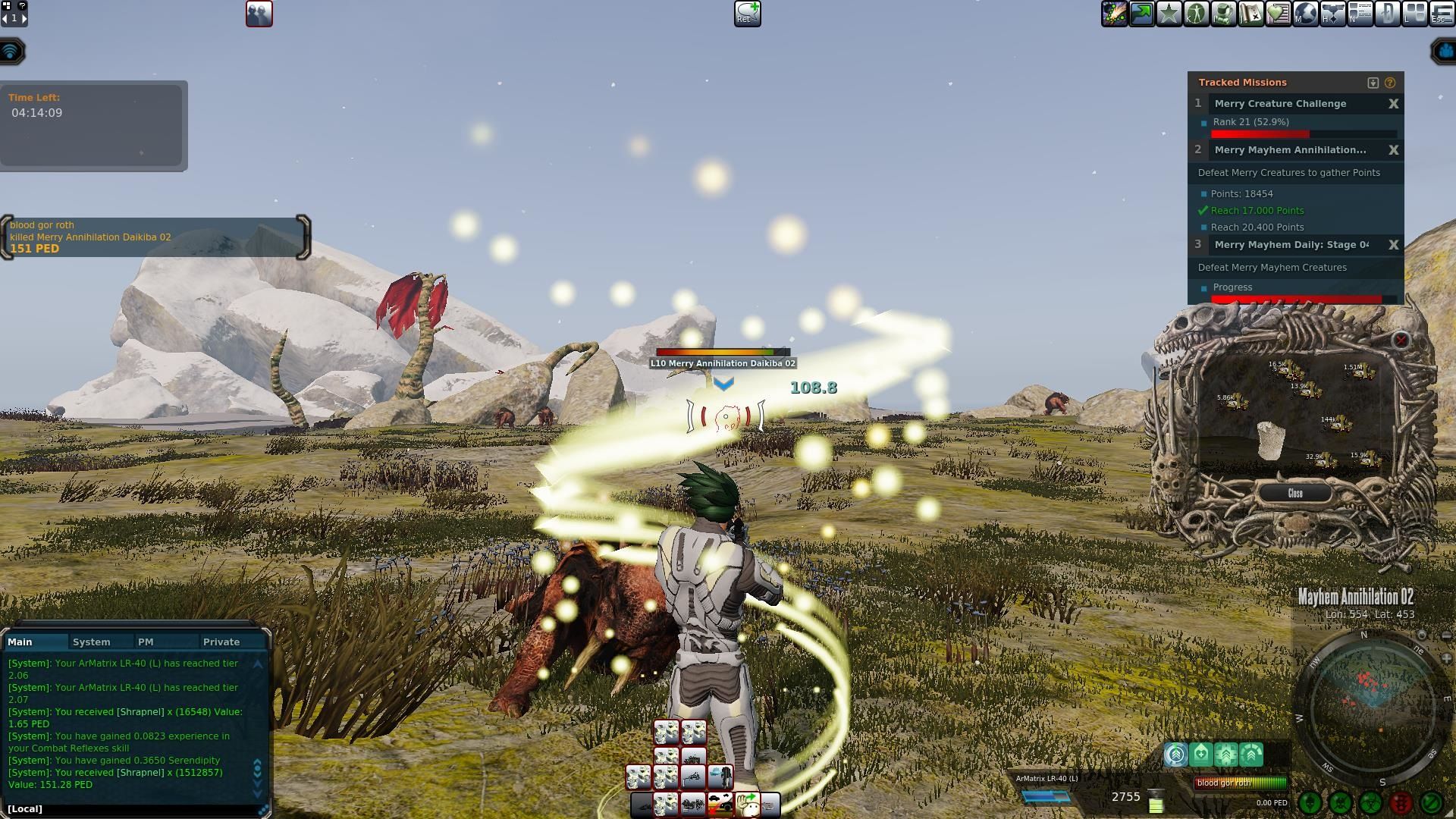 There was just something different about this run. This was further shown to me after killing the first boss of the instance. Not only did it give me 100 points for killing it. I got a rather nice 151 PED global off it as well. While nothing special in terms of loot at this point more shrapnel equals more bullets.

With how cheap a lot of the bosses have been for quite a few runs now. It was nice to get something decent. The bosses did not drop anything nicer than this for the rest of the run in terms of loot. The boss kept giving out 100 points or better time again and again. Something that I could get rather used to happen.

I also noticed I was getting the usual lot of 5 to 25-point kills even further after the boss kills as well. I was starting to wonder if I would be making it to the next stage in a single day with how close I was getting. I just needed a further 1,946 points which is more than double on a decent day. 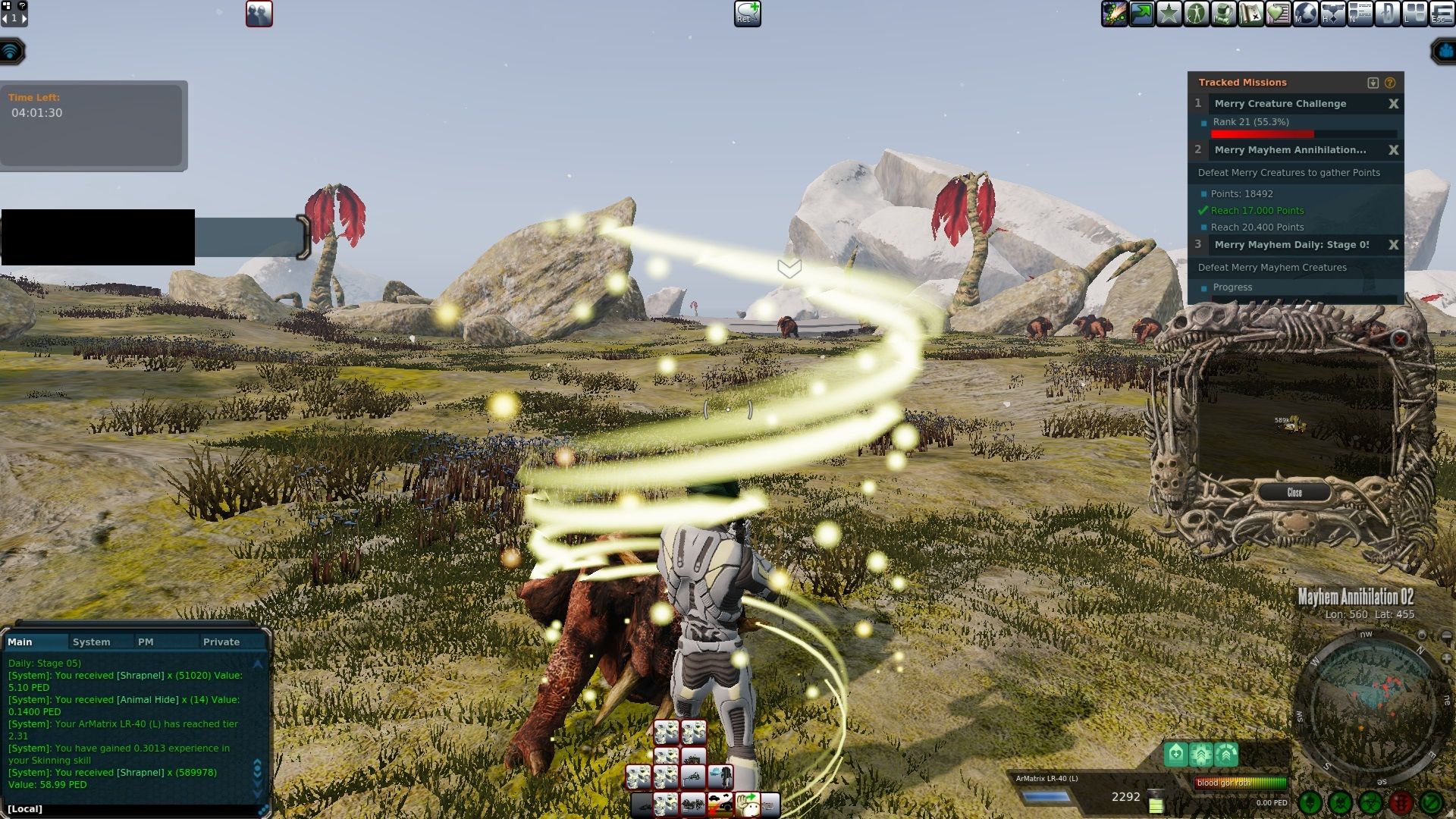 I then got a nice almost 59 PED global. I was not even an hour into the grind yet and I was liking what I was seeing. Sometimes you just get a feeling about an instance. I decided I would finish off my daily at stage 5 instead of dropping the instance and getting another one.

I got to the next boss and while he did not so great of loot. It was another 100 points. The higher chance bosses have to drop makes make it quite tempting to want to try higher-level instances. However, things have been going decently enough that I’ll stick in Annihilation 02 for the bulk of the last points I need. I’m sure at some point I’ll wander into a higher one just for some final higher-level fun. 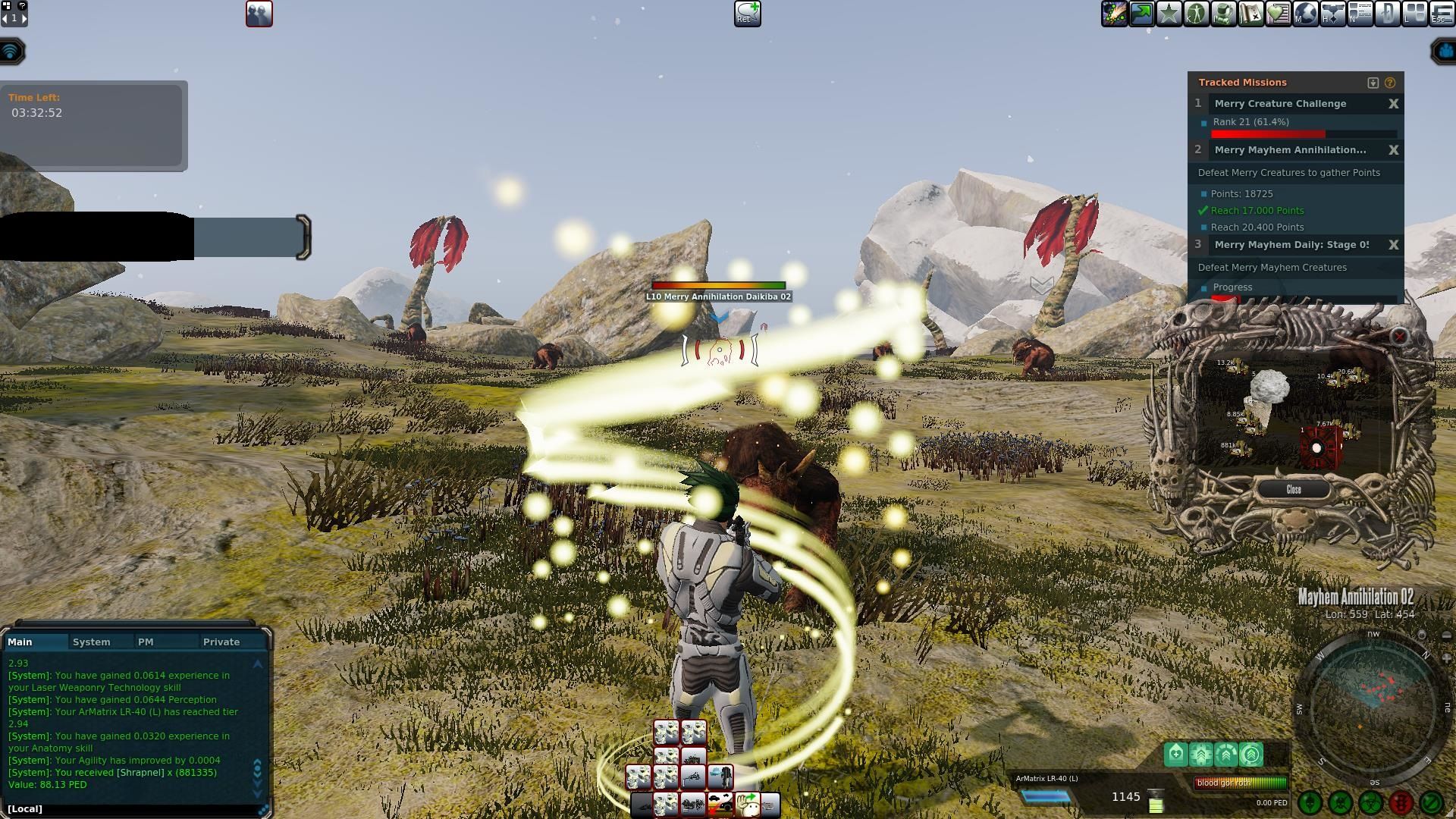 Fifteen minutes or so after the second boss kill of this instance I got another global. That was then followed up by several creatures in the area dropping some 10 to 38 PED loots as well. It can get a bit boring sitting near the zone in the instance. It was working out for me this time around.

I did notice some of the bigger loot were coming from the pack of creatures right down the middle. So I ignored what was on my left and right and worked on clearing those out.

I then went around the back where the Daikiba tends to get stuck between a couple of rocks back there. I cleared those out as well. Just to make sure they were not hiding anything worth looting either. It was an annihilation for sure.

I finished off one remaining boss. My plans however to remain for the entire instance were however spoiled. I needed to log out for a couple of hours. So I had to leave the instance. At least I lasted long enough to get to that next boss before needing to take my leave. 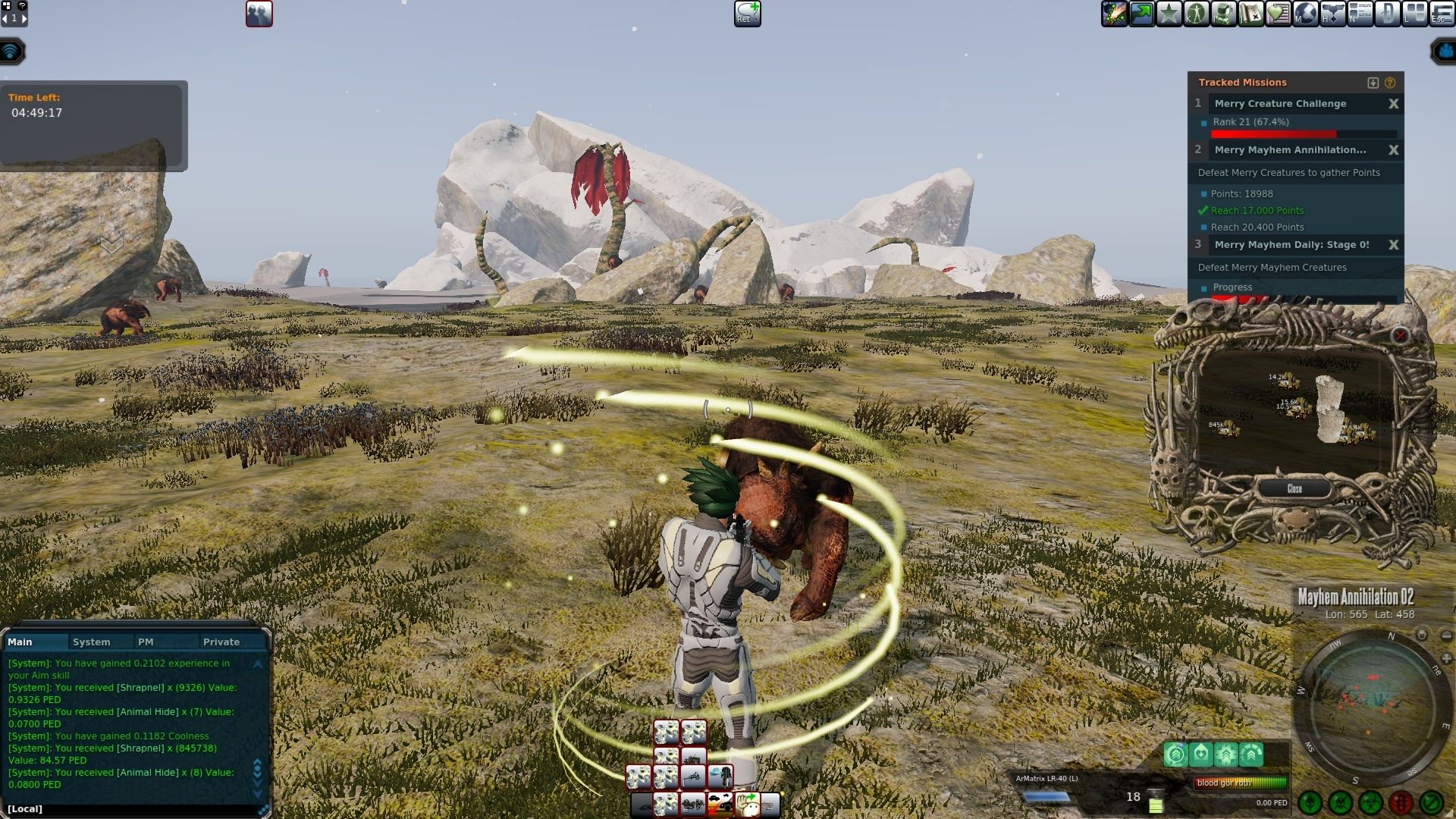 While I was a little disappointed about it. My tune soon changed about ten minutes into my next run once I had returned. An 84 Ped global. I still have yet to see any (L) armor or guns drop. You would think with all the globals I’ve been getting I’d see one at some point.

Not even 20 minutes after that I got another one. This time it was a bit smaller at 56 PED. With this many globals and at the sizes they have been I knew this run was going to be in the green.

The point gains were also still rocking away as well. I even had two 100-point kills and they were not even on bosses. In one pocket of creatures alone I ended up getting 50, 5, 1, 10, and 25-point kills out of a dozen or so creatures in total.

I even had yet another global. This time it was barely one at all at just 50.18 PED. At least it was a global and not one falling short by a PED which has happened to me quite a few times. 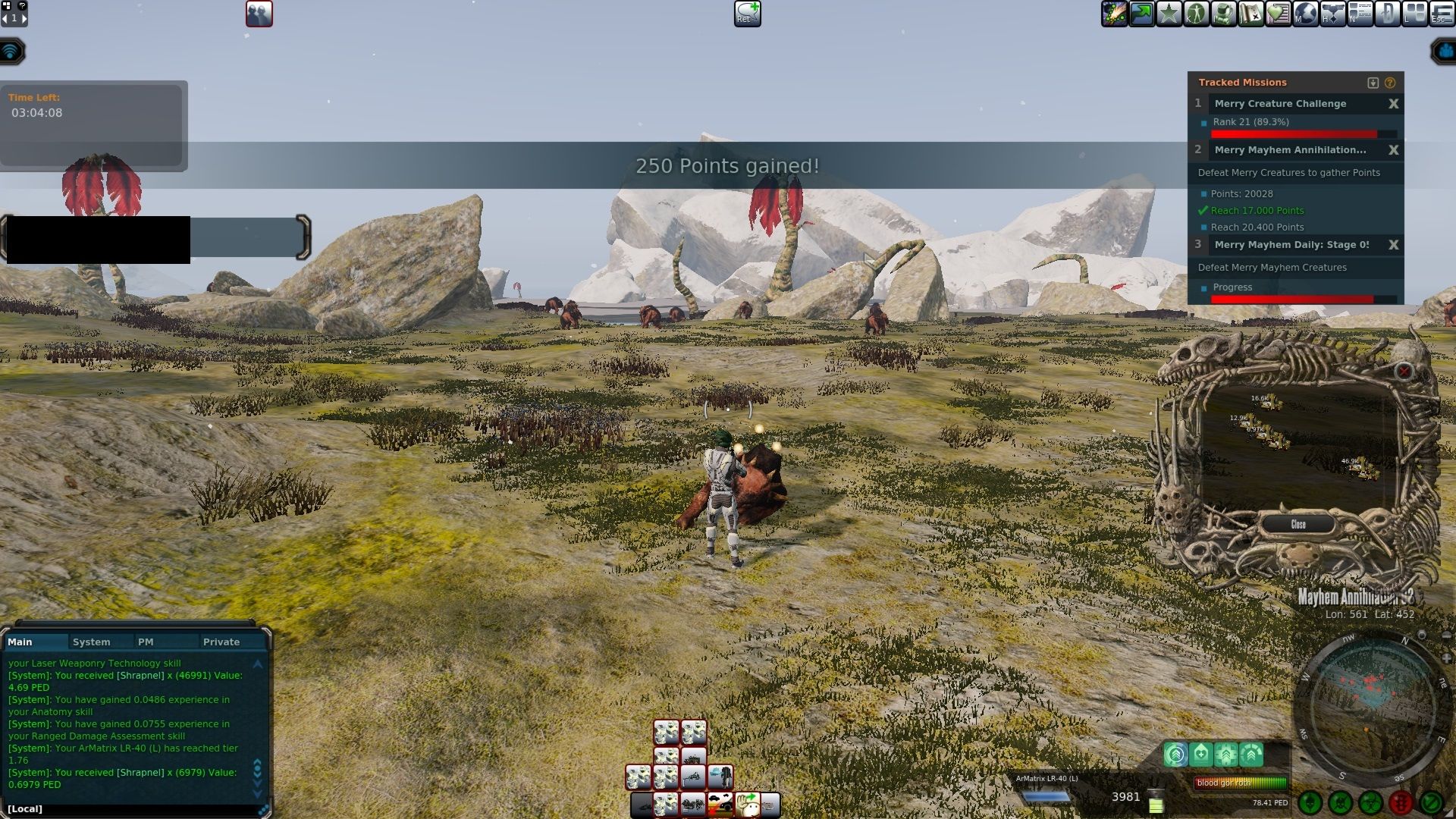 Moments after that I landed a 250-point kill. While this would end up being the biggest point kill off a single creature this session I’d get. It was not the last 250-point kill either. It would however be for this instance.

I stayed around to get one final boss kill in. I then had to take my leave again. I wish there was a way to freeze buff timers. If it was not for those I’d just afk as needed for a while in an instance.

I also felt it was a good time to reset my daily mission. At some point, I was going to need to do so anyways. Grinding up to stage 6 of the daily would take forever to do being in Annihilation 02 with an ArMatrix 40 (L) gun.

I even got to yet another health point increase. While I’ll never have the health of an Uber player at this rate the number of creatures that can one-shot me with a critical strike is slowly starting to decrease. Since you take a lot of decay on death that is just a nice bonus of increasing my survivability.

Not like I needed any help surviving in this level of an instance. I was still at 0 PED spent on any healing whatsoever. At most as far as I can tell my health might dip down to 80% if something gets lucky with a few critical hits.

One of the rings I’m wearing while not that great has increased health regen speed. While I would love one day to replace my rings with a lot better ones. Since that cost around $500+ worth of PED. That remains to be a long-term goal or something I get if I ever get some insane loot drop that would cover those costs. Shortly after being in the new instance and racking up some daily mission stages. I had finished off rank 21 of the merry Creatures codex as well. I ended up picking a whopping 25.68 PED of Dexterity that gave me 291 Dexterity and yet another rank of the stuff.

I’m so glad a few days ago I decided to switch over to picking Dexterity instead of Anatomy. I also long for the days at some point when I end up picking some other skills to go after. For now, though it’s all to increase my looting professions as quickly as I can. I then got myself a 71 PED global not even being in this instance for 30 minutes. At this point, it seemed they were looting a bit above average to what I was used to getting. I also did have quite a few bad runs leading up to this so I was expecting at some point something decent. It was however never the big one I was starting to wonder I’d get with how bad things have been going.

This was yet another instance I had plans to stick around for as long as I could in. It was kind of nice to just sit there and grind away in one spot. Not having to think much bout anything at all. A little over an hour into this instance I ended up finishing stage 6 of the Silver Annihilation mission. Netting me 266 Mayhem Tokens and 53.2 PED of Universal ammo. While nothing else special that is a lot of tokens.

After that things finally slowed down for the day. I still had some decent points gained from kills. It was however nothing that amazing and nothing else loot-wise that was noteworthy. I thought any day I could get seven globals in as how many ever hours I played during it was a good day. The next day would blow this thinking right out of the water. It is a wild one that is for sure.