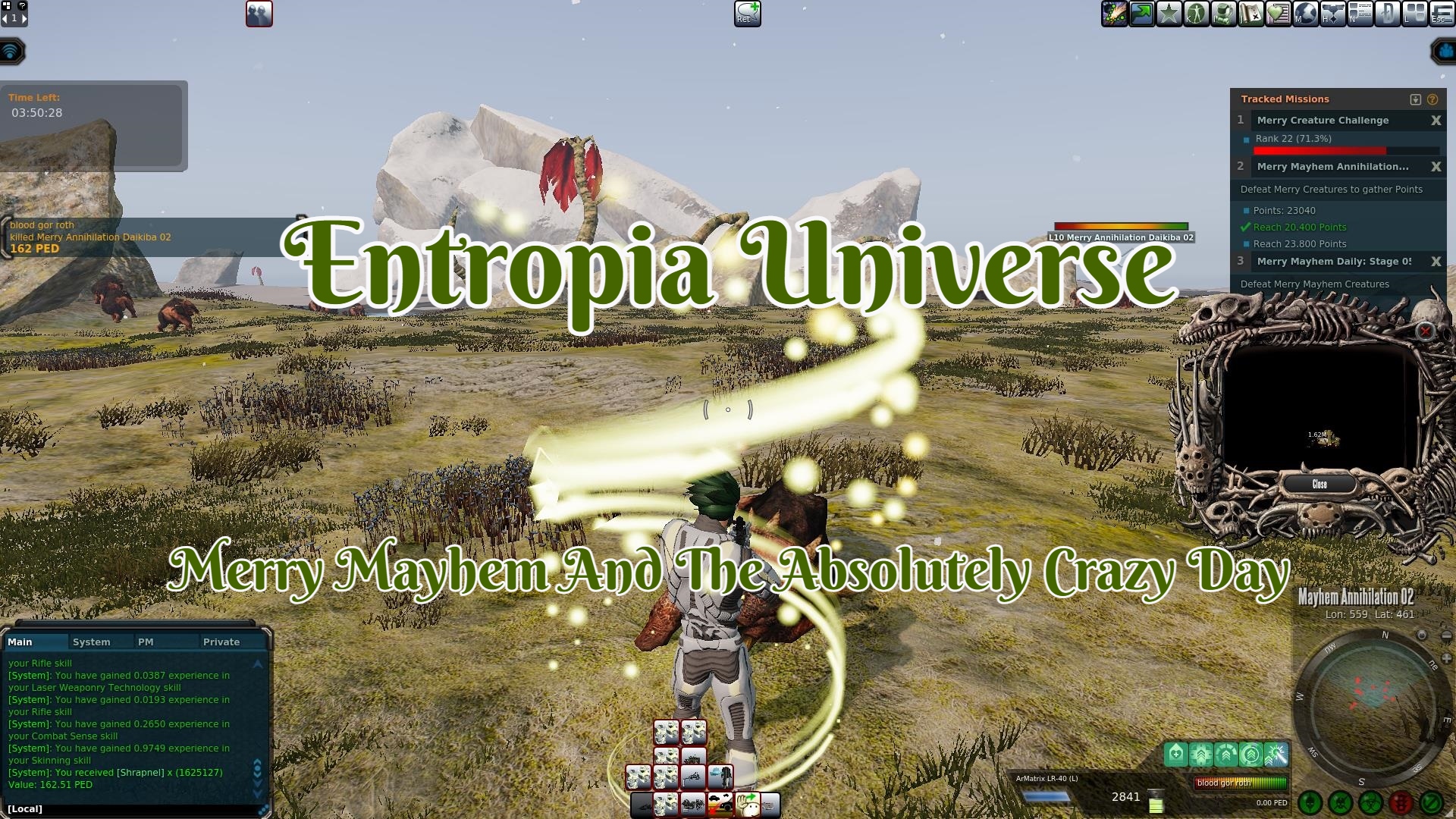 Never in my history of playing Entropia Universe have I gotten so many globals in 24 hours among other things happening. I had quite a few bad runs over the Merry Mayhem event and while this was not enough to make up for them it sure tried. Just to give a peak at the insanity of it all. I took a screenshot of my Entropia Life global data for the day. So many I discovered the third-party tool I use has an issue with globals from the same creature rounded up to the same amount. Naturally, I missed out on getting all of them screenshotted as they happened.

There have been many nights where I could argue with myself that it was not worth having a long grinding session. On those nights the loot just did not seem to be there and all the data I’ve been tracking off seemed to support that.

This time, however, I had this feeling that I was walking into something more. In my last post about Marry Mayhem, I noted quite a nice uptick in globals. To the point where I wanted to keep riding that wave if there was one and get as much out of it as possible.

That feeling soon faded away into my next instance run. I went a whole two hours with lousy loot. I thought perhaps what I had already experienced was as good as it would be. That it was over and I’d just be getting the usual poor loot returns that I had been getting. 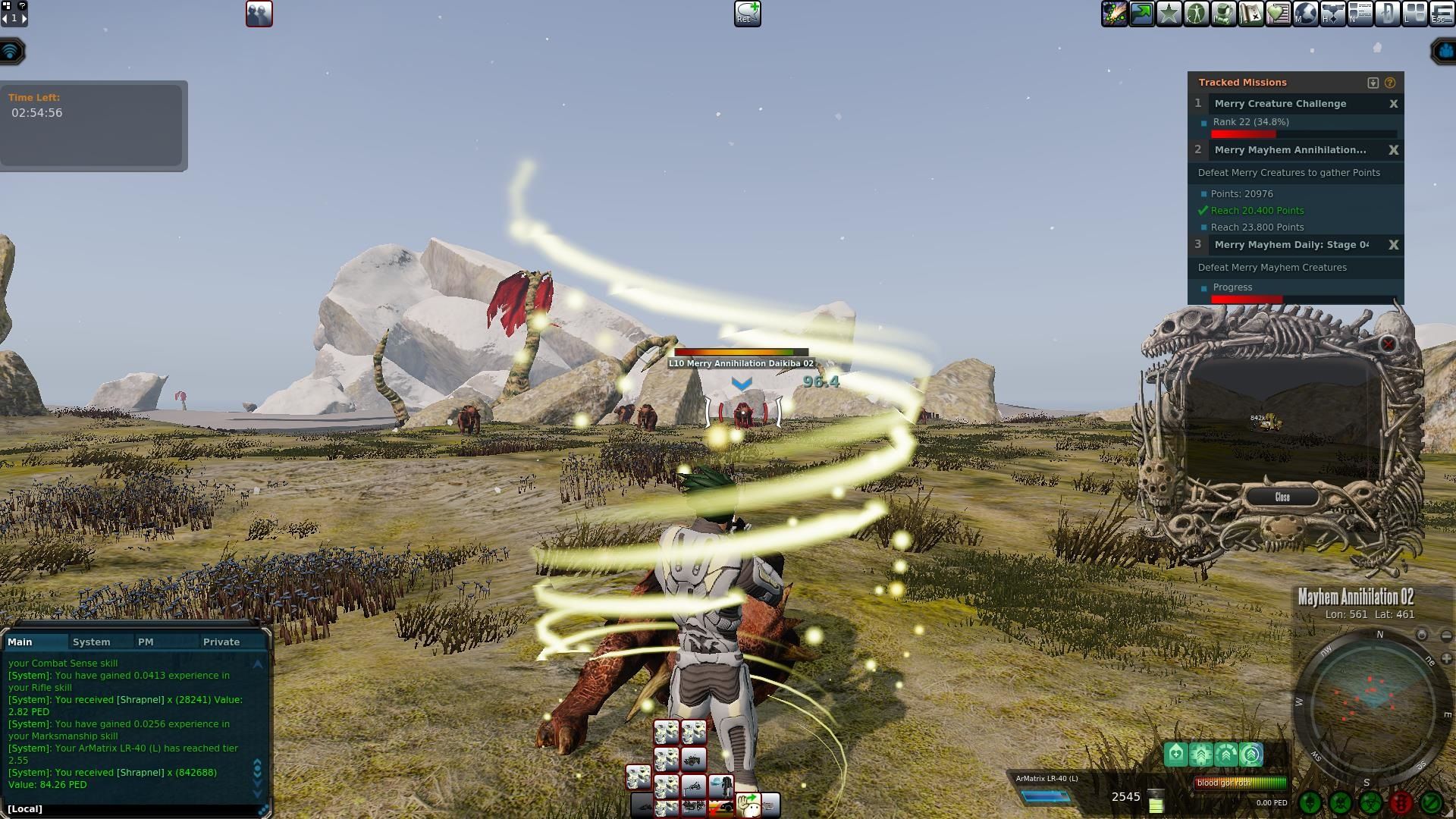 Things started to heat right around three hours remaining. I got a slightly bigger than expected global of 84 PED. On quite a few runs now I’d feel that was a decent amount to loot and it would usually be my biggest global for a single day in this event.

This however was just the madness that was about to occur. It was shortly followed up by a 57 PED loot, 44 PED. I’ve noticed Mayhem quite a few times loves to follow this pattern of threes. Three decent loots.

During that time I even managed to get to level 30 Evaders. My evade skills have gone up so much over these past couple of months from grinding it out during events that I’ve started to take notice of a huge difference in how often I’ve been getting hit. Along with much smaller repair bills for my armor.

Getting globals was not the only thing I was racking up at this particular time either. I even managed to get some 100-point kills from bosses. That alone I would have been happy with but this instance had bigger plans for me in general. 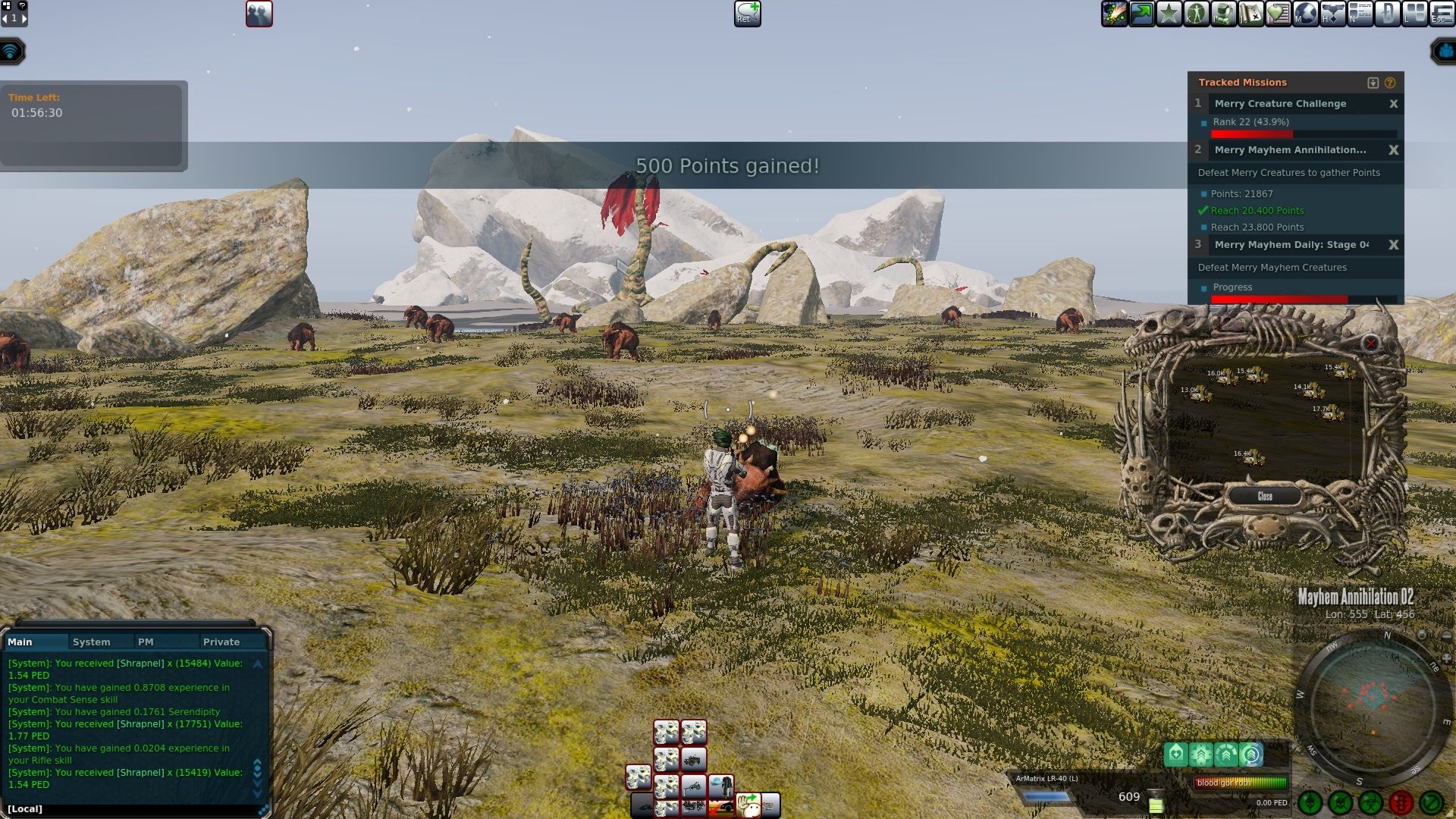 I even managed to get myself a nice 500-point kill toward the event. I’ve noticed a lot of times you are either getting decent points or loot. It seemed to be quite rare to be getting both at the same time.

I was almost saddened when I killed my last boss for the instance. I had less than 30 minutes remaining before the instance would close. I did not have enough time before the next boss would spawn so I took that as a hint it was time to exit and start a fresh instance. 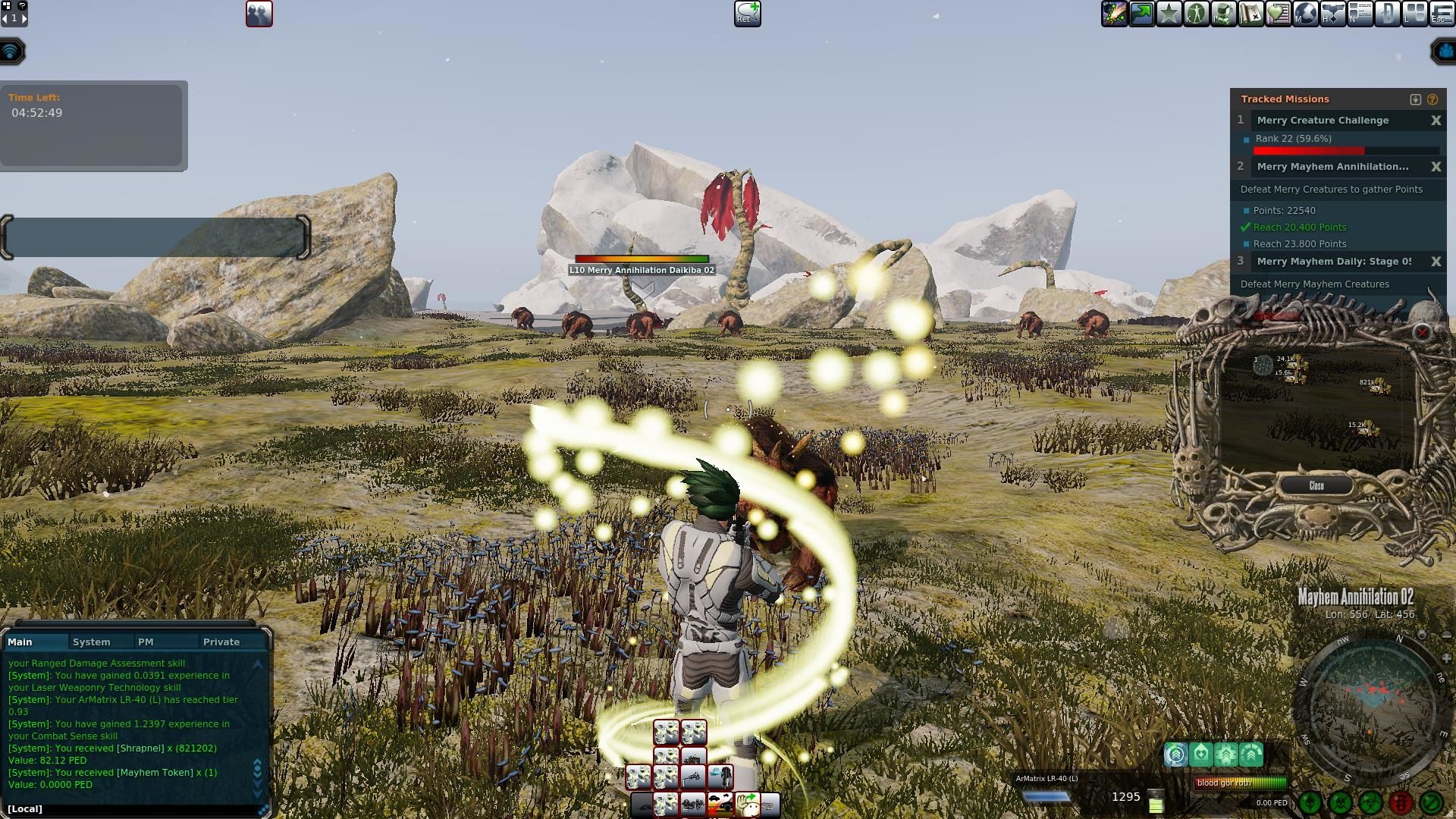 That next instance seemed to be just as hot. Not even 10 minutes in a got a nice 82 PED looter. Shortly followed by a 42 PED and a few 7 PED loots. At this rate, if the instance would just keep finding me a bunch of 7 PED loots for how much it costs to kill one of these that would make a decent run.

While the 500-point kill I got in the first instance would end up being my highest single kill for the day. It was not going to be the last time I got a message across my screen for scoring a higher amount of points. 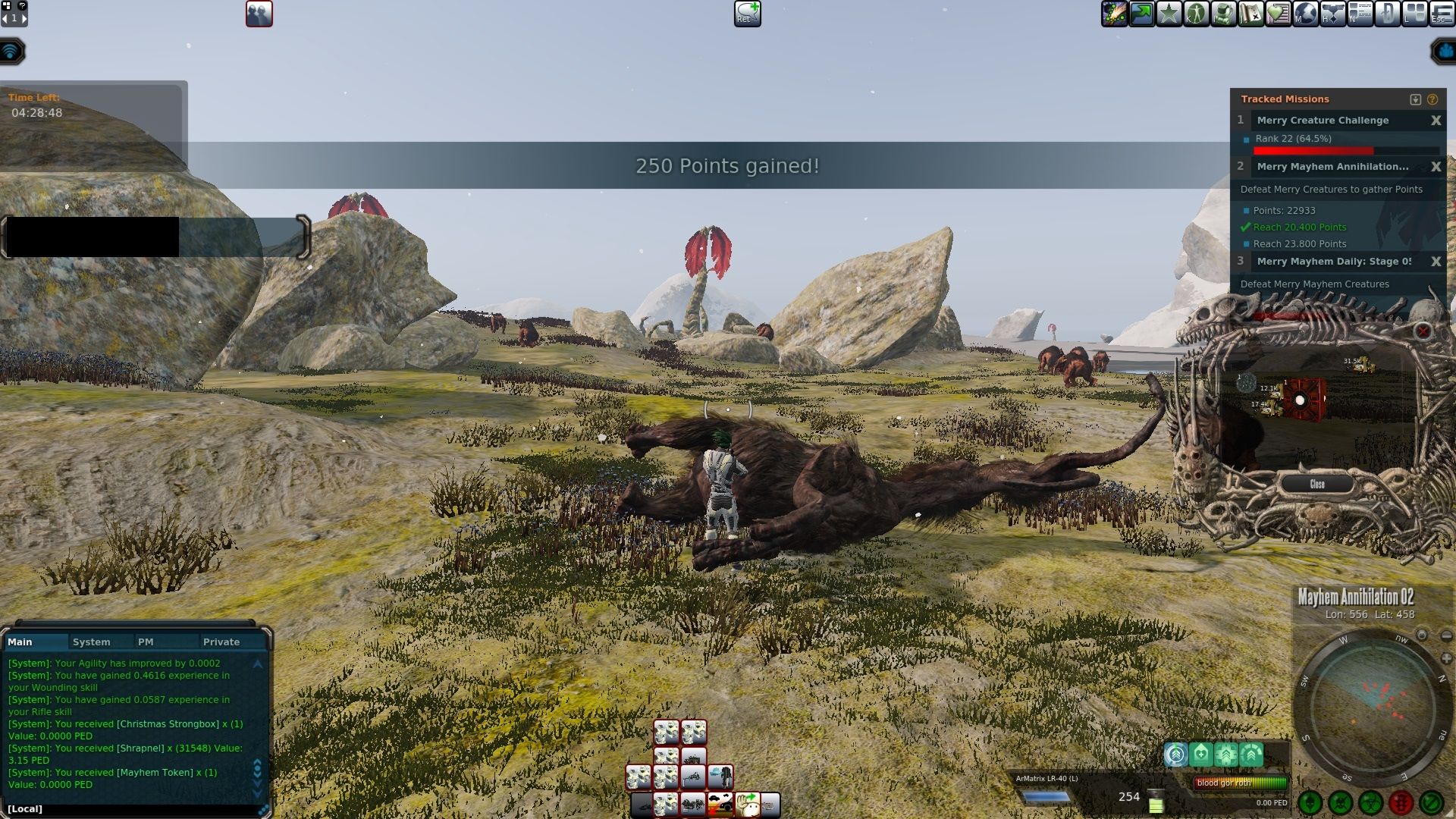 I was rather thrilled seeing this 250-point kill come up. From a boss no less. During this entire event I at most only got 100-point kills off bosses in the Mayhem Annihilation 02 instances. I thought anything bigger than that I’d need to be in a higher-level instance. It’s always nice to be disproven in my favor.

After all that killing it had finally been time for me to make some repairs on my gear and tally things. I would then reload up on ammo and get back to grinding away. My last 1k PED of ammo spent brought in a nice little TT profit of around 30% for that run. 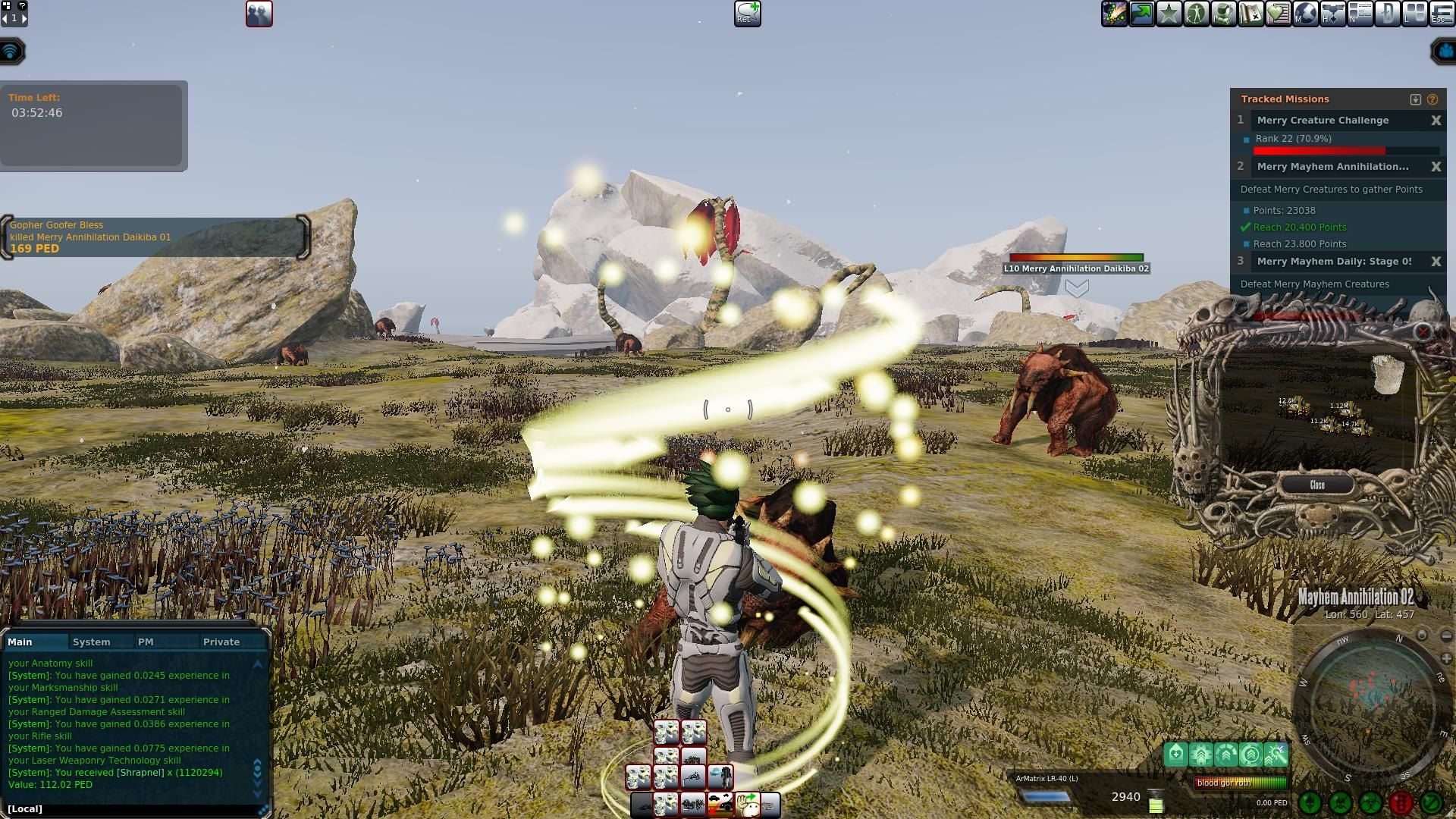 I then hit quite the crazy little pocket of loot. It had all started right after I had killed the next boss. I got 52 PED, 112 PED, and 162 PED loots within the timespan of twenty minutes or so.

As if that was not enough of a victory I was still gaining a lot of skill gains from running a skill pill. I had gained another hit point for my character putting me at 184 with the current ring I have on.

The loot was however not done there by any long shoot. Not even hitting three hours remaining in the instance I got another global of 93 PED followed shortly up by a decent non-global of 33 PED. 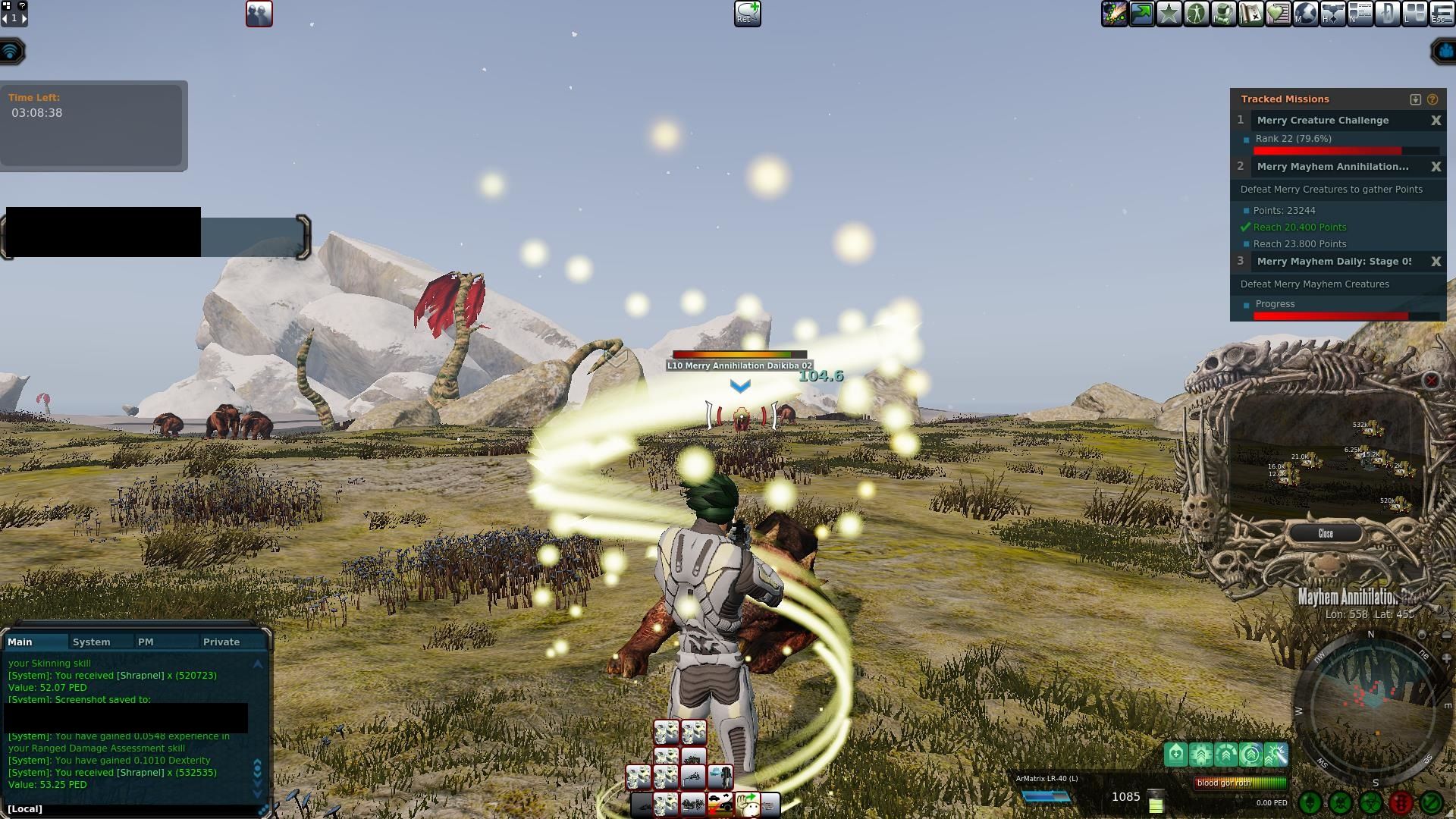 Then out of pure shock yet again for me. I got a back-to-back global. While nothing crazy a 52 and 53 PED global. We are not even talking 30 seconds apart from each other. You can even see in my chat the system showing me taking a manual screenshot of the last one and two skill points later was the next.

I ended that 1k PED of ammo cycled with even more profit than the first run of the day. I went off to repair and restock up and went at it again in the same instance. I am going to miss having TT and repair terminal so close to a grinding spot as you get in Merry Mayhem.

It was at this point I hit rank 6 of my daily Mayhem mission earning me 20 Mayhem tokens. While it felt quite silly to get a fresh instance with the steak I was on to start another daily. I knew I would not be grinding it up to rank 7 and I was already quite late in picking up that day's daily. So I felt I’d take the chance. Turns out that was quite the smart move to make. You know sometimes I swear all the fun can be in the first half of an instance. My third instance for the day was no letdown either. Not even 3 minutes in I got a decent 58 PED global.

At this point, I’m quite tired from a long day. I’m grinning almost from ear to ear and had been for hours. This was the shot in the arm I needed to continue this quite long grinding of an event that went on for far too long. I had racked up so many points in these last few instances I even managed to hit stage 7 of the Merry Annihilation event. Netting myself 53.20 PED of ammo, 106 Mayhem Tokens, and .4 PED of Stamina gave my progression toward another health point a decent bump.

Naturally, that was not the only thing I was getting close to finishing either. Ten minutes later I finished off rank 22 of the Merry Mayhem Codex collecting 28.89 PED of Dexterity which was worth 209 Dex levels for me.

All this alone would have been enough to have made this one wild and insane day. I also hit level 30 in animal looter which is quite a milestone of a skill to get. By doing so I unlocked Butchering which I would get a lot of skill gains out from further looting animals I hunt. It has a 10% contribution to the Animal Looter profession which is quite a huge deal.

Along with Xenobiology which I’ll be honest, I’m not quite sure what I’d need to be doing to gain points in that. This skill unlocks only grants 2% towards the animal looter profession so I’m not that worried about it. It is however nice to have in the event I am ever doing any activity that would reward it. It’s some kind of scientist skill in the game.

All those Dexterity skills I’ve been picking up from the codex have paid off in a big way. I can’t wait to see how fast my Animal Looter profession takes off now. Not to mention some of my other looting professions are quickly getting up to the level 30 mark as well. I then went off to get another three further globals before that 24-hour period had ended. That day I racked up several profitable runs. Scored over 3,500 points. Finished off a codex level, and many daily missions. Further gaining a health point, and even unlocked some hidden skills.

This was absolutely a crazy day.