I have always found it somewhat shocking when Entropia Universe players say they were just checking their inventory and found unexpected loot that they overlooked acquiring. That has seldom happened to me. I can think of maybe two occasions it has. I’m usually paying enough attention to what I’m looting that I don’t get anything of surprise when I go sort things out into storage. 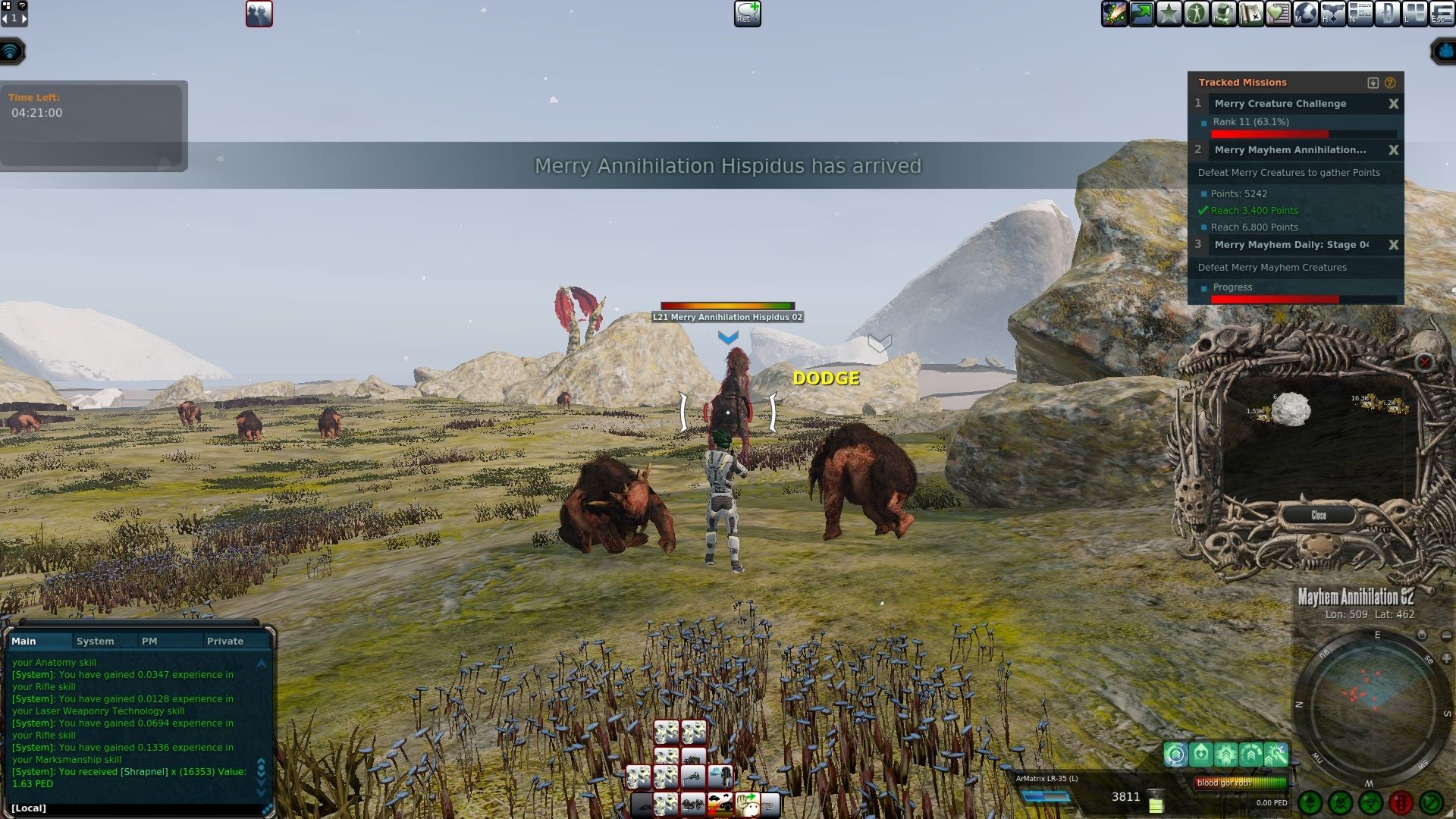 The start of this session was quite dull. I did not even bother to take a screenshot till the first boss spawned. You can see I had gotten very few points in the first almost 40 minutes of grinding. The loot was about the same-- rather flat.

I killed the boss and below the cost to kill it dropped in loot. Along with the normal boss drops (1 mayhem token, and 1 box.) I also did not get any points for killing it. This I thought was rather on the course for how this instance was running so far. 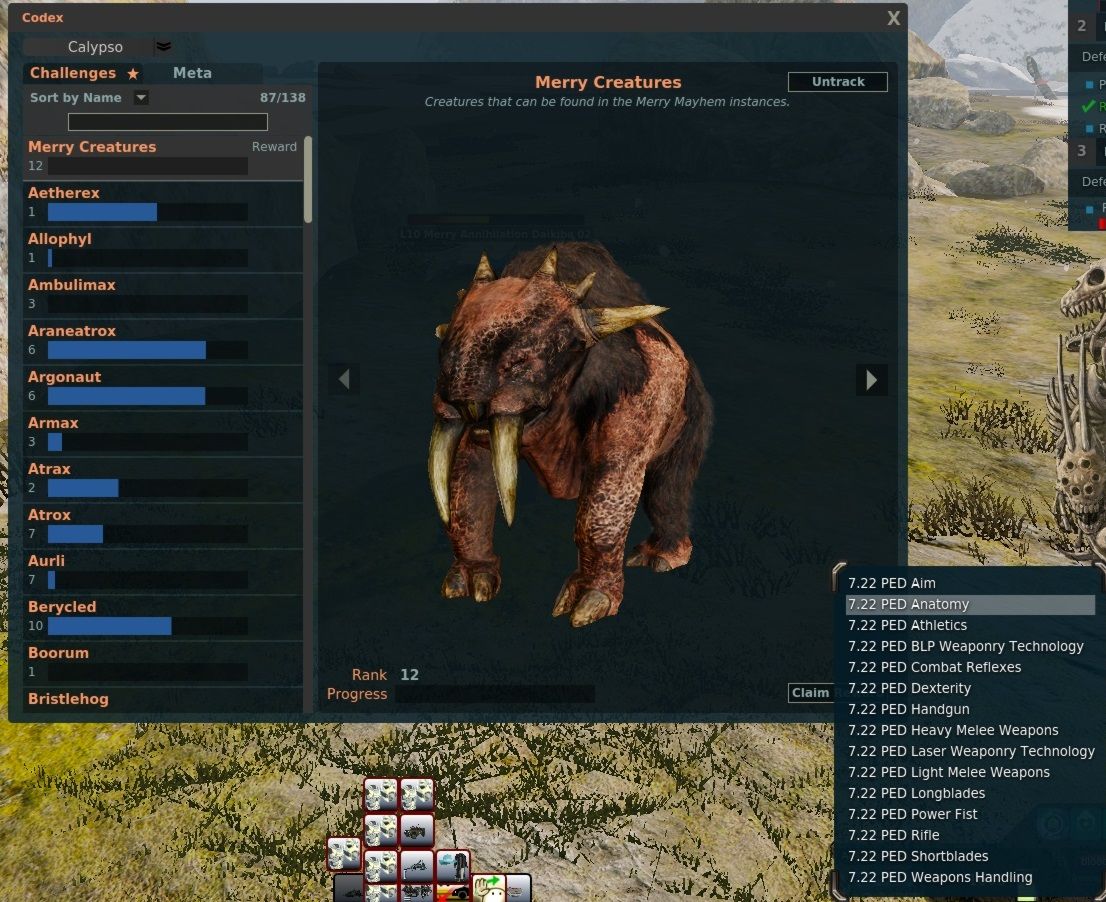 Over an hour later I had hit rank 11 on the Merry Creatures codex for 7.22 Anatomy. This would be the last time I was going to take Anatomy when I get this selection of skills to choose from for a reward.

My Anatomy skill was getting quite high to the point the number of actual points I was getting in skill gain seemed to be no longer worth it. I noticed this at selecting Anatomy as a reward and realizing that is getting quite a small amount of skill gains. So I ran the numbers and double-checked them against some of the other options I had to choose from.

It turns out that Dexterity skill while will be giving me less than half the contribution towards my looting professions. I would not be getting 30 or so Dexterity from a similar amount of PED reward. It would be several times that. At least that is my theory and I’ll be testing it the next time I can if the math checks out.

I more than likely should have started to select different skill rewards a bit sooner. At least Anatomy is quite a useful skill for me anyways it’s not that big of a deal.

Instead of just increasing my animal looting profession by a couple of percent when I get these options of skill rewards moving forward every time I gain another Codex skill for these creatures. It will now be 6% or higher I figured. Quite a nice leap! 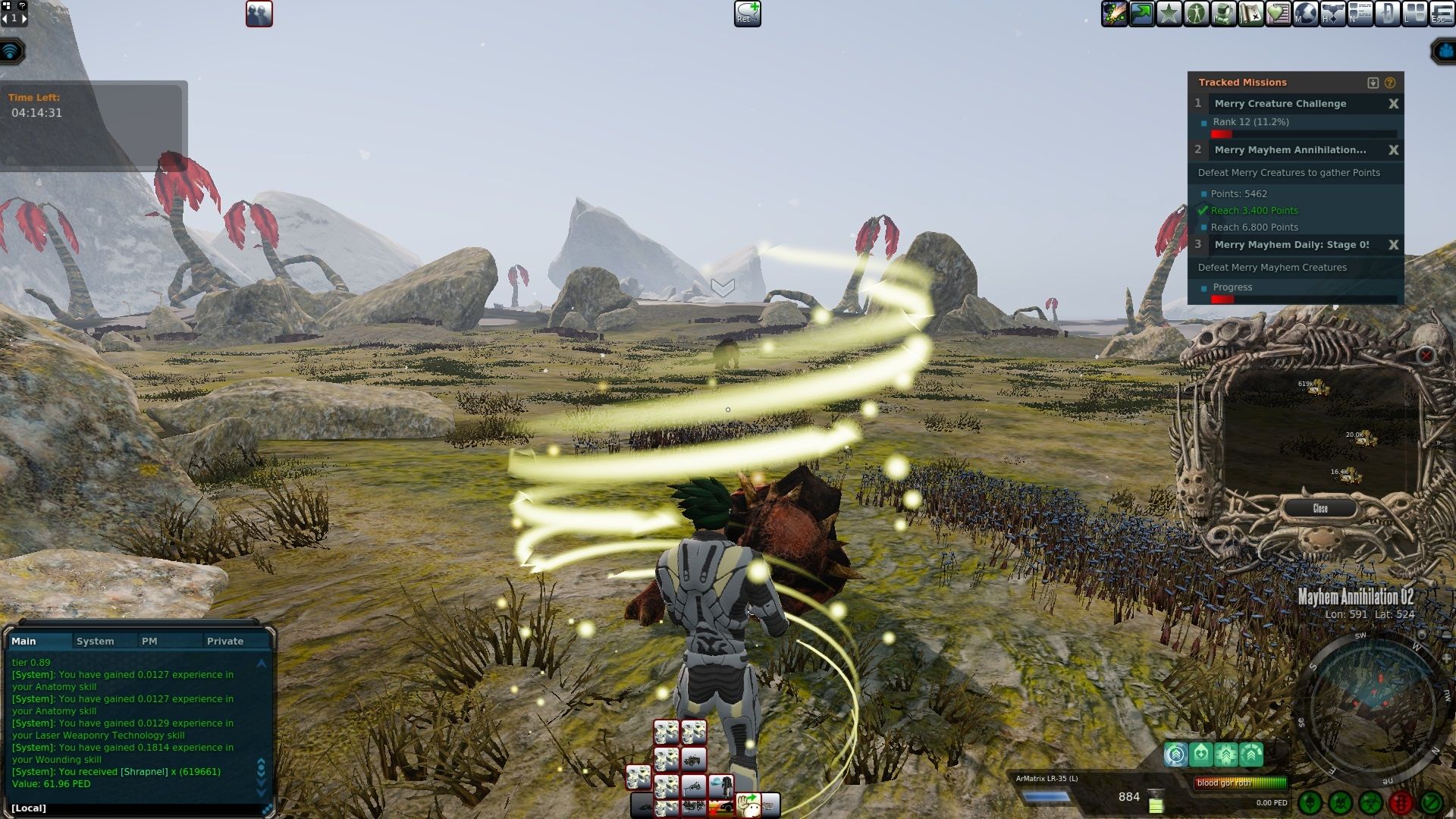 Almost two hours in I ended up getting my first global of almost 62 PED. Just more shrapnel for me but with how much ammo I’m burning though I’ll take any I can get my hands on at this point. I would later get a couple of 20 PED loots here or there but nothing else that special.

I went on killing for quite some time only racking up a single point here or there for the Merry Mayhem Annihilation mission. I even killed a couple more bosses without much luck either. It seems I was in a bit of a rut.

At least this session I reached level 49 in Ranged Laser (Dmg) profession. It looks like by the end of this event. I should have unlocked the next tier higher of guns than I can use at this time for the Armatrix lineup. That will be great when I go on some bigger hunts to have. 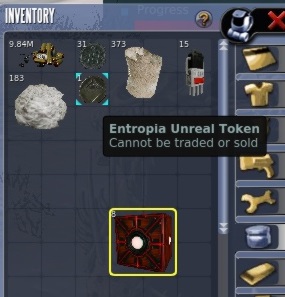 It was time for me to call it a night. I opened up my inventory for one last time to count up the value of my loot and sort it out. I noticed two stacks of tokens in my inventory. I did not think about any of it I went and selected to merge all stacks. I still had two stacks of coins afterward.

I thought that was strange. Then I realized it looked a bit different than the normal Mayhem tokens I was looting. Now, I knew it was not going to be a rare token without having to look at it. You get a Hall of Fame global unless you already have one on you which I should not have.

So I hovered my mouse over it and noticed I had acquired my first Entropia Unreal Token. There are going to be 1 million of these. You think with that many they would be raining like candy. They however are not.

I looked at the online forums and for how much PED and decay people were cycling on this event before seeing one of these drops. As I figured players would be talking about this sort of thing and they, in fact, have been. It looks like I was quite lucky to get one when seeing how often much higher-level players were even getting one of these.

I at least wanted to get one of these during the event if nothing else but for a survivor. Since this event, they are a new drop. I can now check that off my goals list for this event.

As far as how much they are worth. At this time they are not tradable but next year they are expected to be. People are speculating they might be worth 10 PED on a good day.

Just by holding onto this for all of next year, it should yield me ~0.5 PED or 5 cents of PED. I honestly would have preferred a rare token! It was at least a nice surprise and I did not notice looting it as I was endlessly farming for the night. 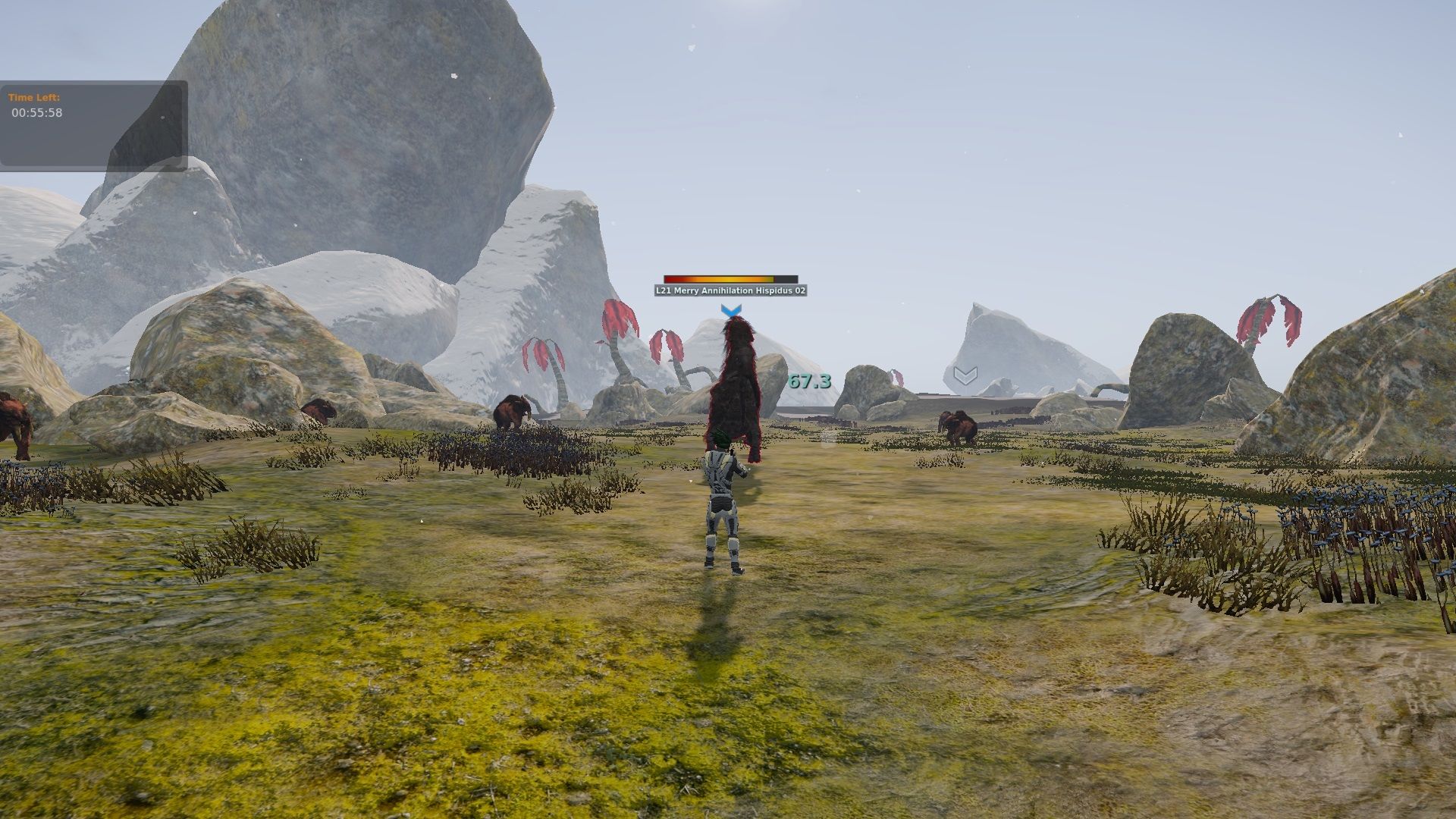 I ended up earning only a couple hundred points for this particular grinding session. While the loot for the most part was not great at least I got my first Unreal token drop. Thankfully this was not one of my worse runs and just it’s just a shame the token is not expected to be worth much as far as people are speculating at this time.