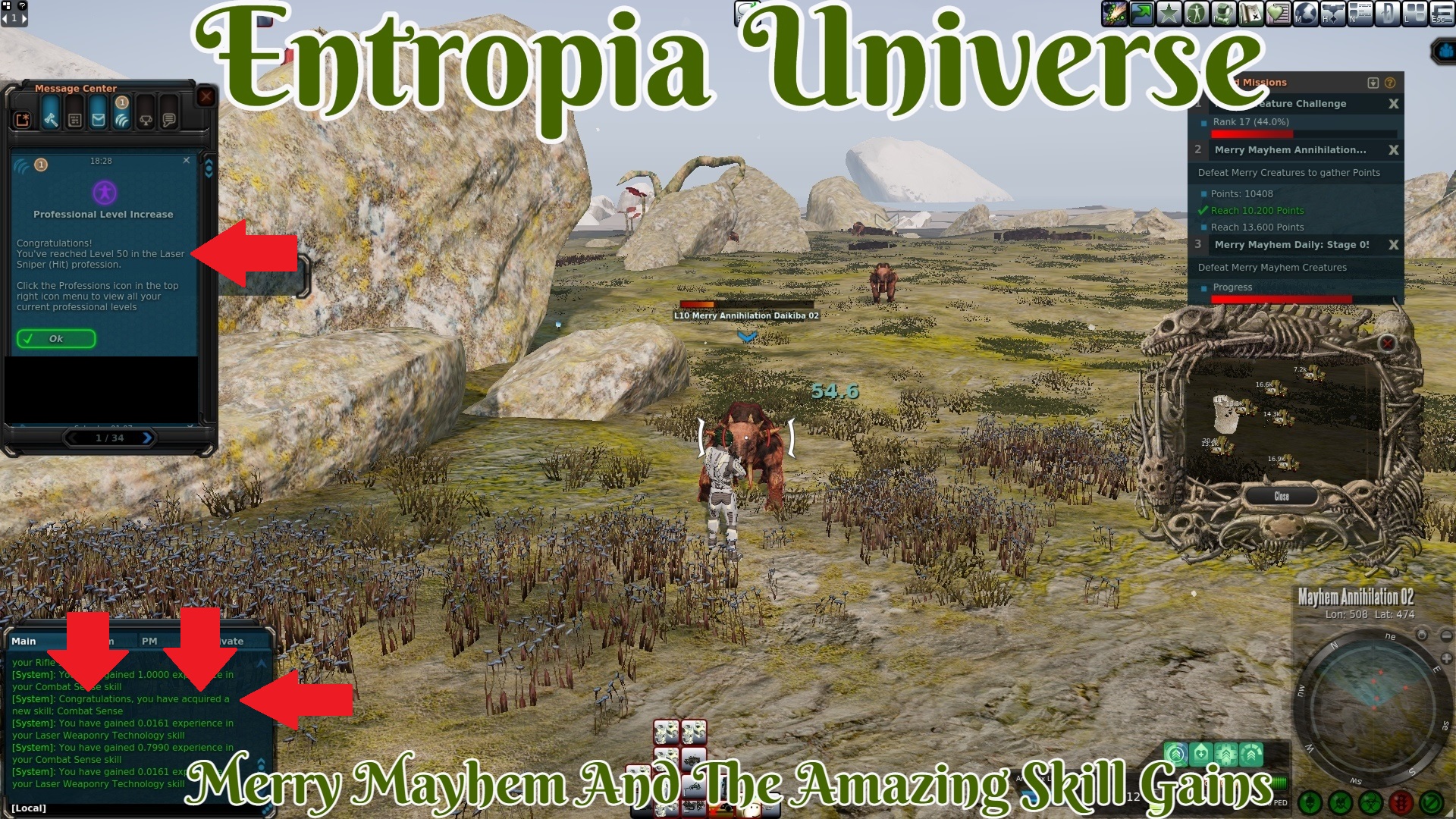 Entering these long-term events just for massive skill gains almost in itself makes it worthwhile for me. These instances create a closed environment with a vender and repair area for when I need them. I just sit in them for hours on end grinding away.

One of the biggest contributing factors to all the skills gains I have acquired has been the 100% skill increase boosters I have. They are just about to run out. After that, I still have 50 hours or so remaining of 30% boosters but they just won’t be the same.

This post covers several different days of hunting and grinding away. As It ended up highlighting at least for me as a player some cool things going on skill-wise. Not to mention up till this point just how many skills I’ve racked up.

Another interesting thing that occurs is you can get at random skill boost buffs. You do get them on occasion hunting outside of an event as well. I don’t quite recall getting them at such a higher rate than I am during this event, however.

Some of them are also ludicrous high which seems quite out of the ordinary. Such as that 282% increase for laser weapons. It only lasted for a short while but dang if only this was one of those 15+ minutes I’ve gotten during this event. That would have been just crazy. 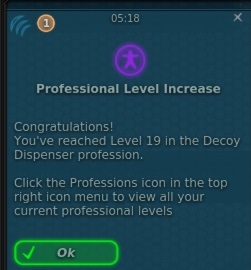 While a lot of the time I get progression increases for stuff I just don’t care for or use. Such as this decoy dispenser profession. I don’t think I’ve ever used it in my life. At least if I never wanted to I already have a nice base profession level in it that I would not be grinding it from rank 0 even though the main skill for that profession is.

You also never know if one day you decided to switch to using something else. For quite some time in Entropia Universe, I use to use BLP weapons. I just ended up preferring the sound of lasers shooting over BLP shots. 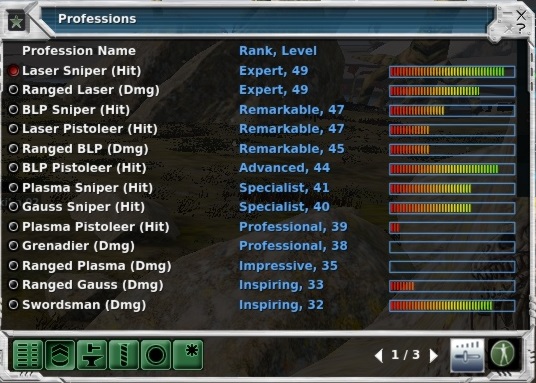 If I ever had to switch to BLP range or say Laser pistils they are not that far behind my top ranged laser skills. This can also be great if I don’t care about what I’m leveling or if I’m strictly looking for cheaper options on the market.

Having these higher-level skills also gives me a lot more options in a range of guns during events like these. While right now I’m using an ArMatrix Lr-35 (L) and I really would not want to go below that for these creatures.

I also have on me a bunch of Armatrix Lr-40 (L)s which ended up dropping a lot in price allowing me to pick a few up. While the event causes shortages in one area of the market if you know you got options you might find something else at a better rate.

I’ll end up using a higher-level gun shortly. The markets are not acting the same way they did during Mayhem Halloween. Perhaps the crafters just holding out for Merry Mayhem or were better prepared for it than Halloween. Either way, all these skill gains continue to unlock more and more options for me.

I could even switch out to say using a sword like I use to grind up a few different skills if I wanted. One of these days I might have to do that for some nice health and strength gains. Granted my sword skills are only in the lower 30’s so I’d more than likely want to do down one category in the event to do so.

Quite a powerful thing that helps a lot of professions increase is when I get a new skill unlock. I ended up doing that when I hit level 50 in Laser Sniper (Hit) profession. While that means my Hit professions will skyrocket past my Damage professions yet again.

I knew at level 50 Hit in any profession except for mind force I was getting that skill to unlock. There are also a lot of side benefits I was not fully aware of till I looked deeper than I had when I acquired the skill Combat Sense. Strangely it has an effect on defense professions and even animal tamer that I did not notice before.

A defense skill is something I was not gaining a lot of despite all the other gains. I’m mostly killing creatures within them hitting me a couple of times. I’m also slightly over-geared as it ended up being the cheaper option than having to do a lot more healing for the lower-level gear I have.

Combat Sense skill has a 6% contribution towards Evader and even 7% for the dodger. Evader is the main defense skill I’ve focused on the most in Entropia Universe since the creatures I tend to hunt are evade.

That is quite the massive boost I’ll be getting for defense as I quickly rack up the first thousand or so skill levels in Combat Sense. It also makes me wonder what other unlock I don’t fully understand how amazing they will be when I get them or once I’m close to getting that I’m not aware of.

On top of that shortly later my damage profession also hit 50. So now I can use an even bigger gun if I wanted. They however cost a lot more than the ArMatrix LR-40s that I’ll be switching over to soon. So I’ll hold off on buying any 45s till I hunt something of decent size. 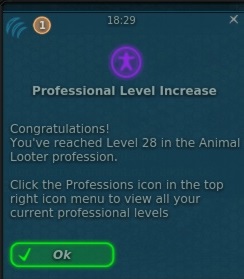 There is also another profession I’m keeping my eye on. I recently hit level 28 in Animal Looter. At level 30 which I’m hoping to get during this event, I’ll end up locking in two skills: Butchering and Xenobiology. Combined they will have a 12% effect on not my Animal Looter profession. That is also quite a massive deal.

I’ve also now finished up to level 16 of the Merry Mayhem creature codex. Level 16 alone was 14.44 PED of Dexterity. These codexes are more rewarding than the Halloween ones and I can’t wait to see another large jump in value for the rewards in just a couple more levels. 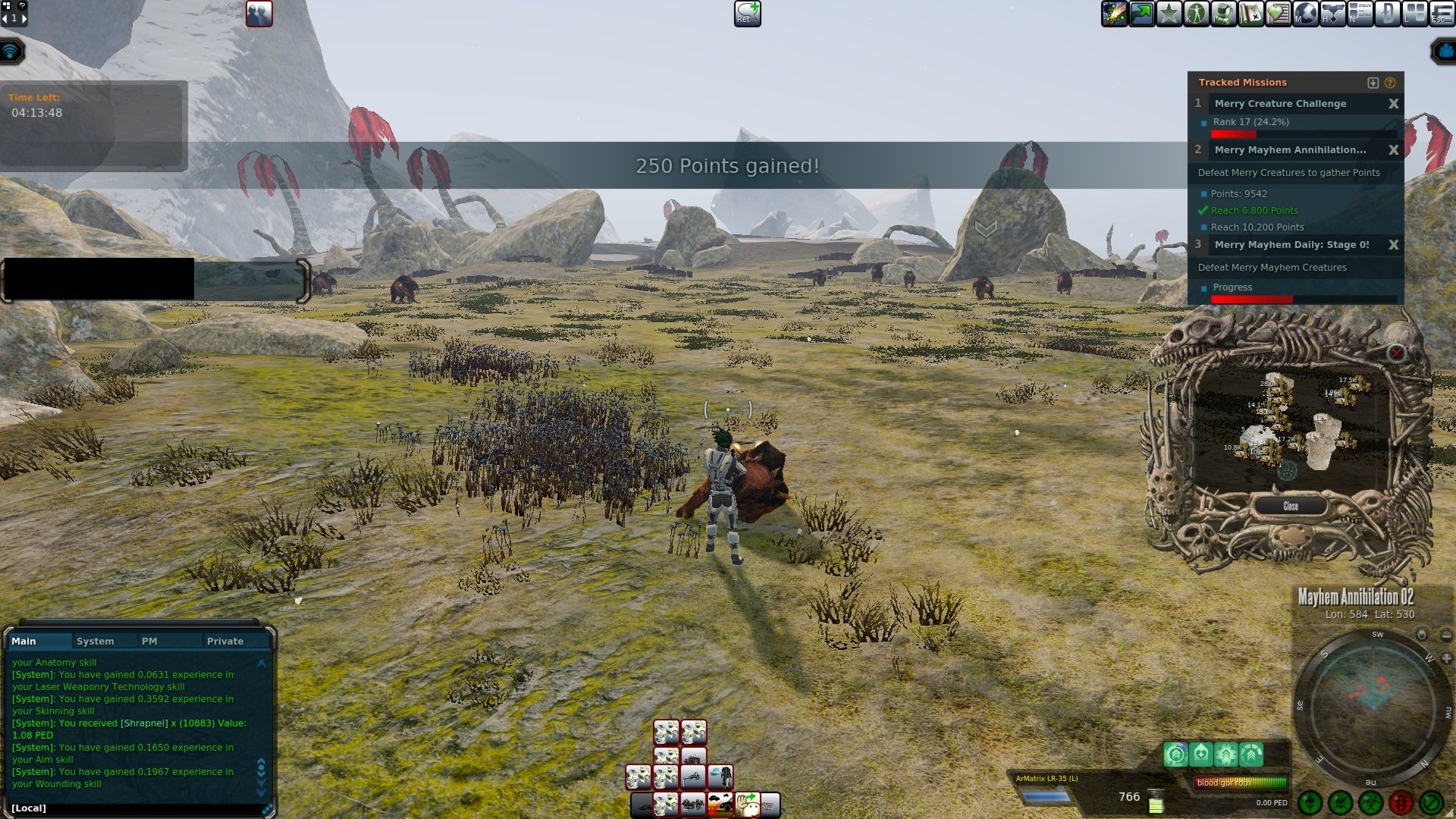 There was also a few globals. I still have yet to get a single HOF. You would think at some point I would since soon enough Merry Annihilation Daikiba will be the second-highest global creature I’ve hunted in all my years of playing Entropia Universe. That is quite crazy! Outside of the amazing skill unlock of Combat Sense and reaching level 50 in a hit and damage profession for weapons. I did rack up over 3k points for Merry Mayhem Silver Annihilation. I had some quite insane grinding sessions in terms of time not so much in any large points gained other than what was mentioned above.