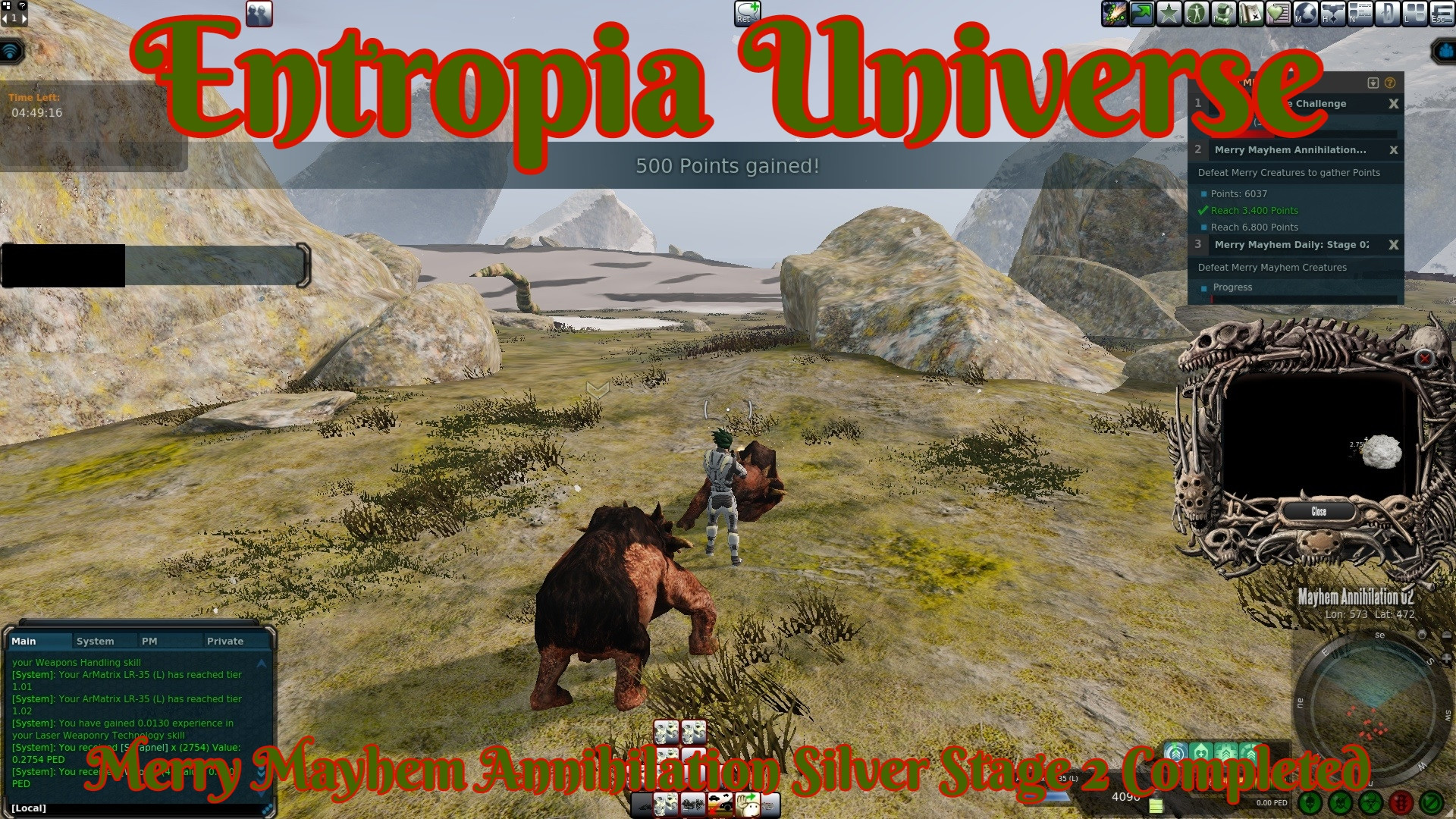 It was raining points once again like the game was trying to make up for my last session in Entropia Universe. I was getting quite close to finishing off the next stage of the Merry Mayhem Annihilation Silver mission. So I set my sights on completing that this time around and loaded up with ammo.

It is always exciting when something happens within the first ten minutes of entering into a fresh instance. As you can see from the cover image I got 500 points off a single kill quite early on. At the level I’m hunting at, that alone would account for over half the point I’d need to get in a single day to keep pace with what I need.

A few kills later I had gained enough skills to acquire yet another health increase. With the current ring I now have equipped I have 179 health. That is by no means anything huge in Entropia Universe. For me, however, I can’t believe how quickly this year I’ve been gaining health points. This must be in part due to codex grinding. 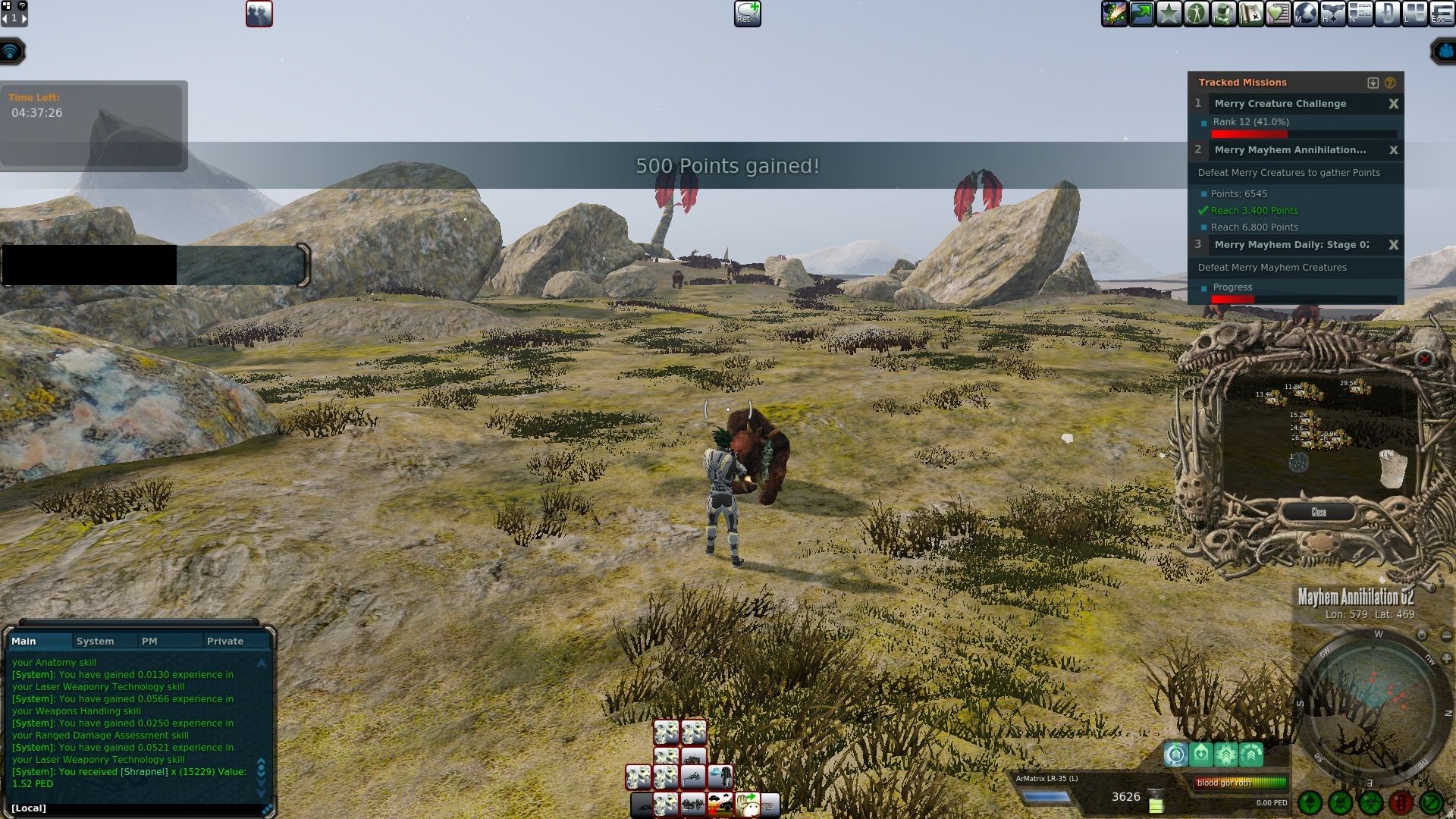 Shortly after that, I score another 500 points! That now put me at 6545 points of which I only needed 6,800 for the next rank. Even if the rest of my run ended up being a flop I would hope I could scrape by with that many points to finish things this stage off. 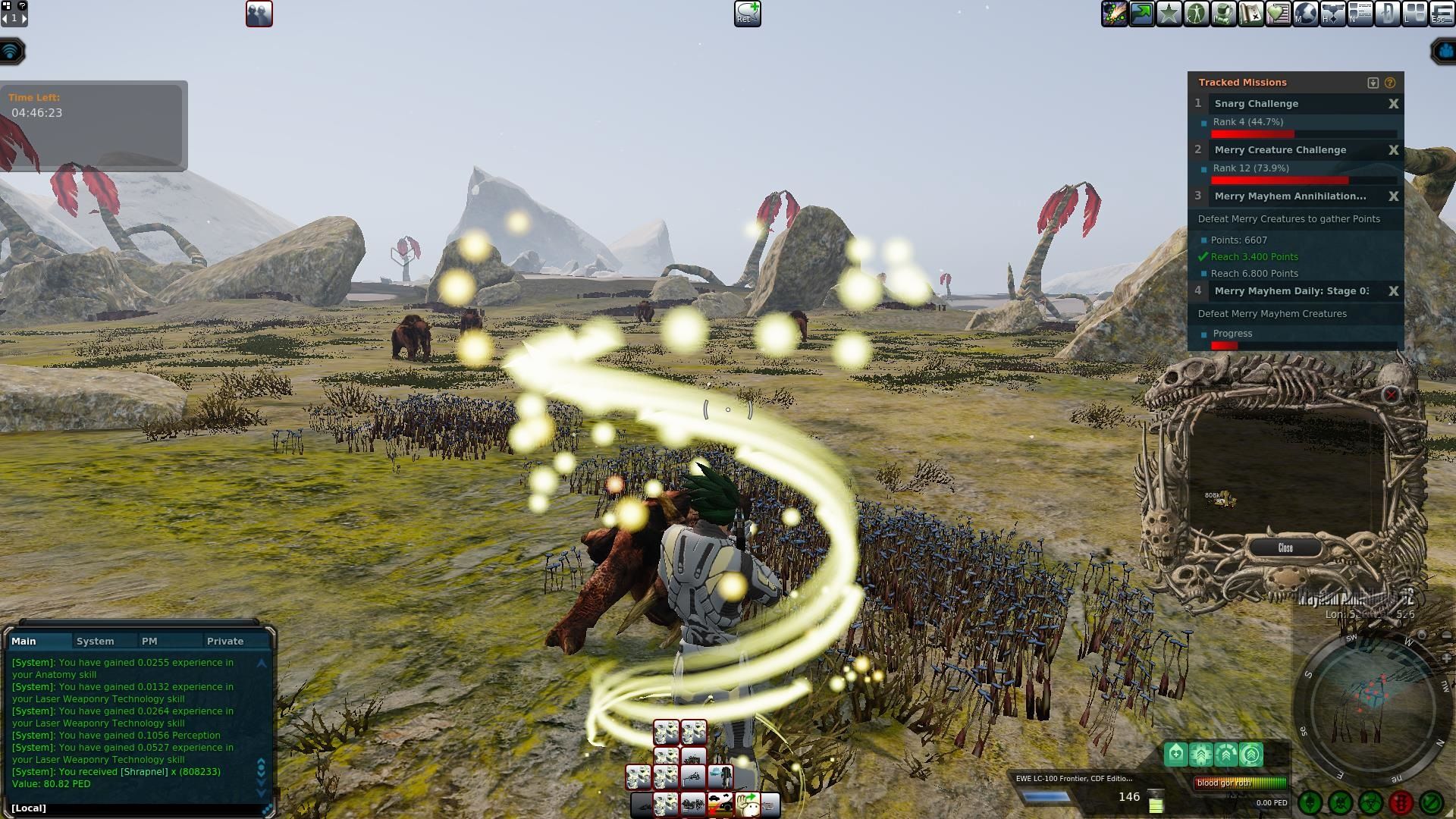 At 6,607 points I ended up getting an 80.82 PED global. This ended up being the biggest of the day. I would throughout this run get a further two. While sometimes they will end up being rather close together not this time around. One of them was hours apart from the others.

About an hour later I hit rank 12 of the Merry Mayhem creature codex netting me 8.02 PED of Dexterity skill. While I did not write down the amount I got I was correct in switching over to picking Dexterity as the better one to be getting for my Looting professions. 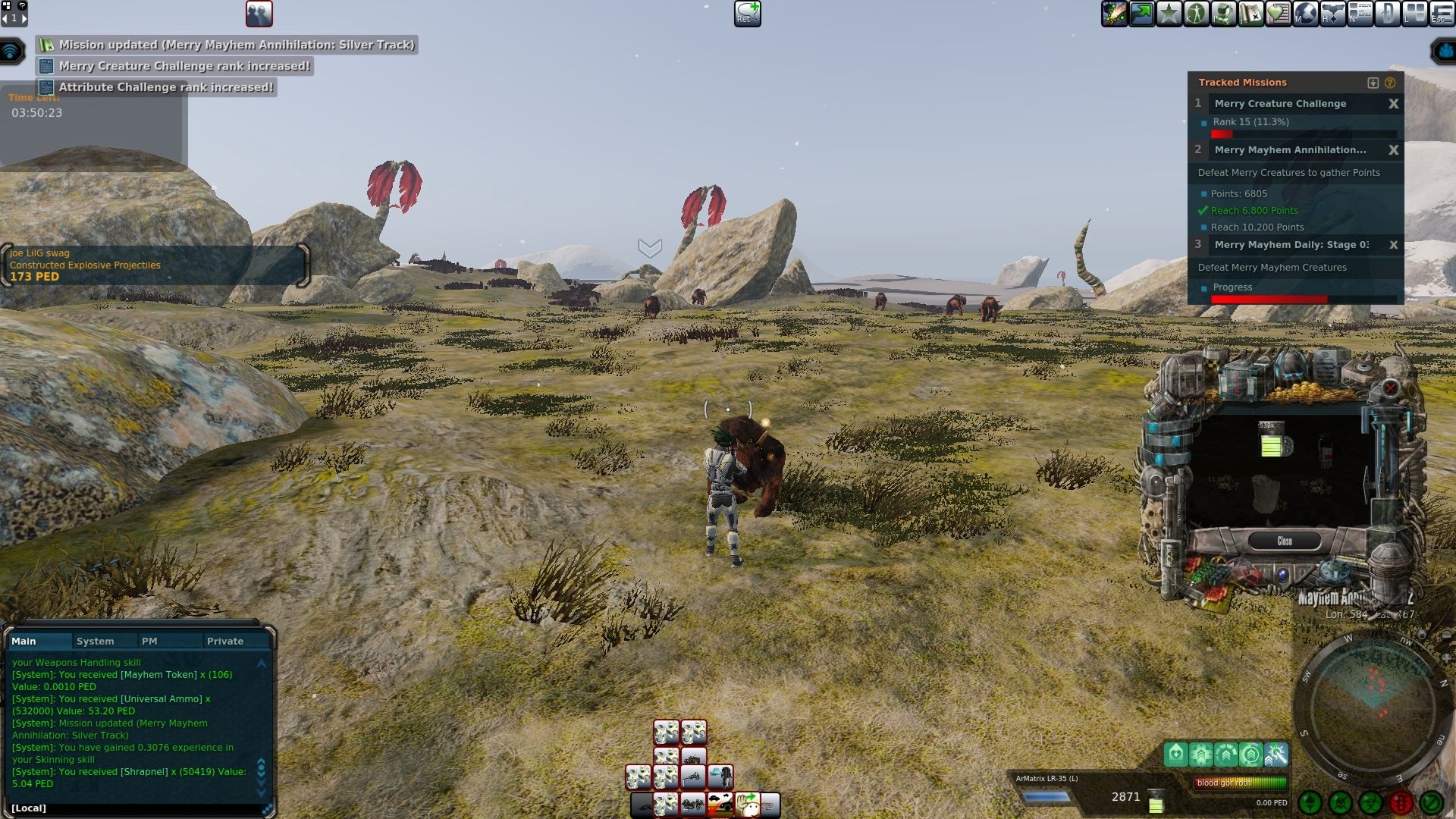 Then quite a few things all happened at the same time from getting a single kill. I got gotten the final few points I needed to reach 6,800 for stage 2 of the silver mission for Merry Mayhem Annihilation. This yield the reward of 53.20 PED of Ammo and 106 Mayhem Tokens.

In addition the stage two reward gives you bonus progress toward the Merry Mayhem creature codex finishing off rank 14 for me. On top of that, it also finished off the meta progress as well that you get for every 5 codex level increases.

It is always amazing just how much bonus progress they ended up giving you every few stages of Merry Mayhem Annihilation. It had to be around a full bar with progress.

I ended up selecting 6.01 PED of perception from the codex reward. While I wish there was a better option from the skills you can choose from to my goals since I already have a lot of perception. It’s the only one that works for me.

I’m just thankful at least one of the rewards is useful for me. As there are quite a few I do not need for whatsoever at this time. It would feel almost like a waste if I had to select something else.

After that, the points kept rolling in for a short time longer. I had a boss that gave me 100 points. Along with two 50-points, a few 25-points, and more 5-points gains than I cared to write down. It’s always nice when you can end a session with a few hundred points toward the next stage. The 3,400 points needed per stage feel a bit less of a grind that way. 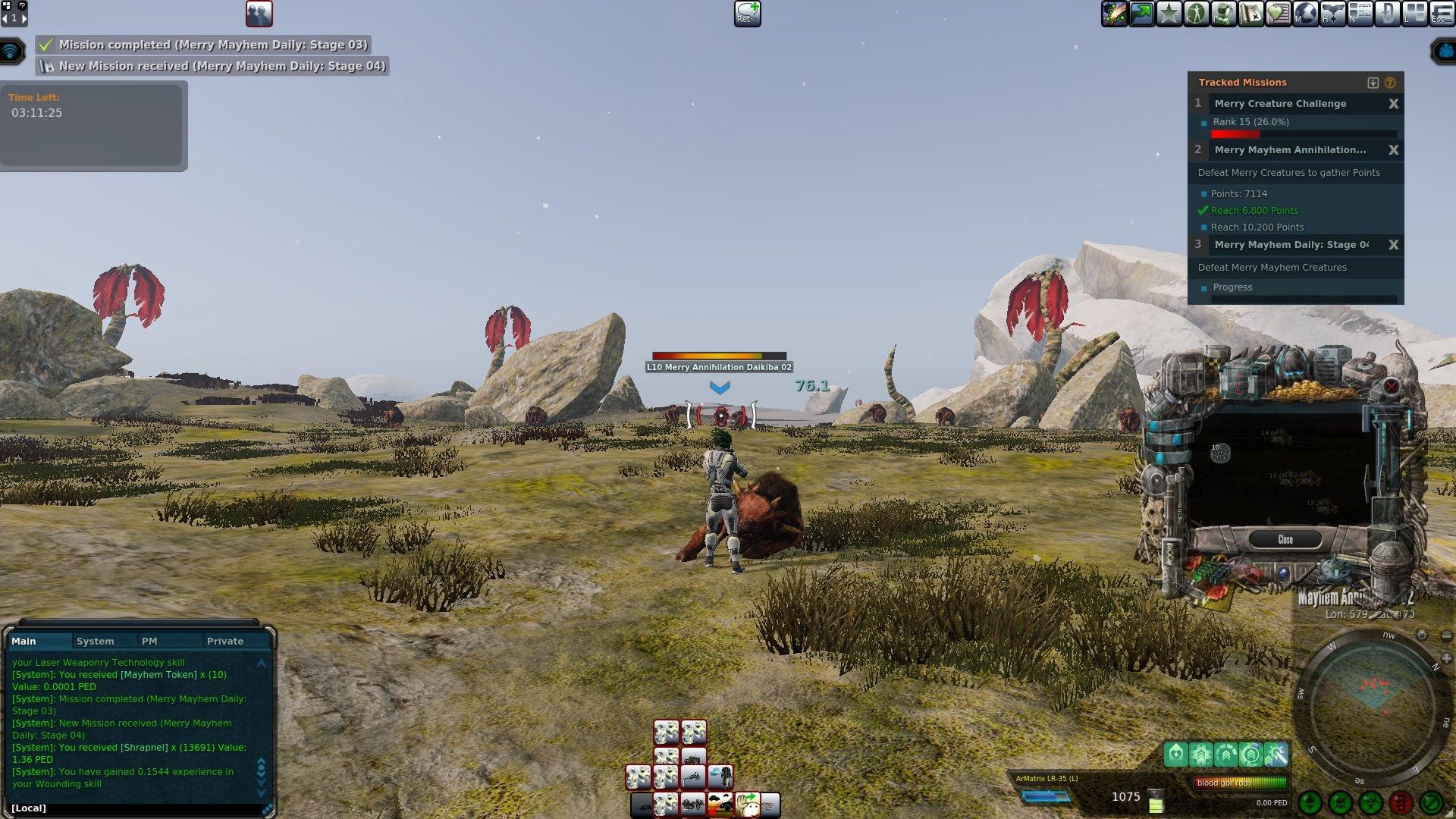 All the action ended up being in the first half of this run. The rest of it was quite boring. The points after halfway through the instance died down a lot just like the loot. I however kept at it somewhat. You never know what you end up getting if you just leave right away. This time around a whole lot of nothing.

At least now stage two is done out of ten. I’m also getting quite close to quite a few skill goals I have in mind for this event. It has been crazy how well the skilling has been going. It would have taken me many months to do this many hunts to get me close to what I have done in such a short while.