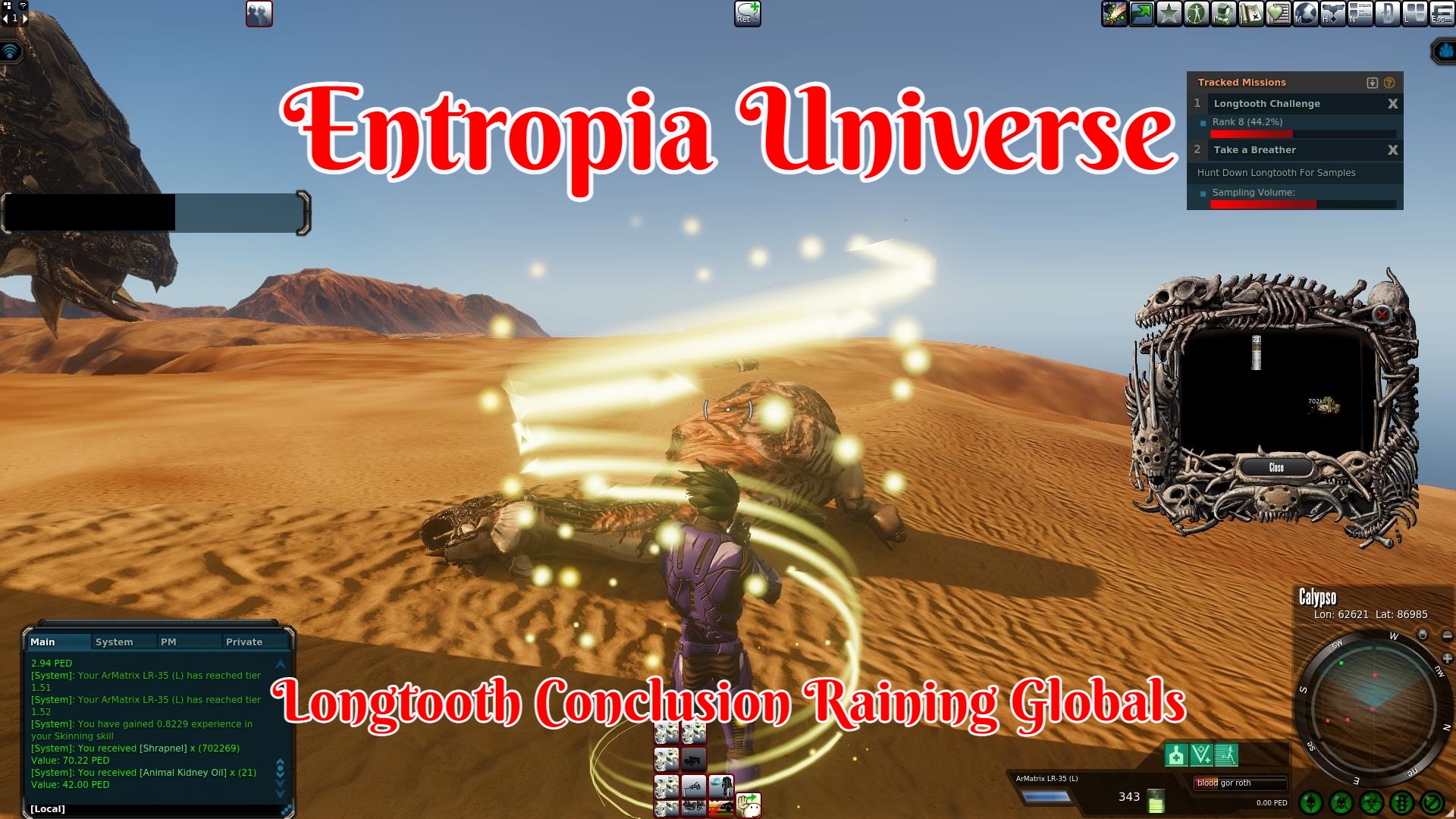 This is my final entry into quite an epic hunting barrage that took place over a week. I decided to stick with hunting Longtooth old till the spawn was replaced with some higher-level ones as the old migrated east. On rare occasions, I would find myself entirely alone at this spawn for Longtooth Old. I ended up just clearing from one side to the other and then back again. I’m kind of glad I stayed in that back area as loot elsewhere for whatever reason just kept being dreadful.

It was kind of nice and quiet without anyone else around. No loud sounds of other players' guns firing all the time. No sounds of people healing, things getting killed, and so on. Just me and where ever I wanted to hunt in this area. Sometimes I would head out after getting a fresh batch of ammo and I just knew the run would be a banger. Other times it took a while before I would get my first global for the day or just that session.

What I have been rather enjoying is just being able to log in and hunt for 45 minutes to an hour at best. Then logging out and working on some other stuff. Then coming back and doing another hunt later on. 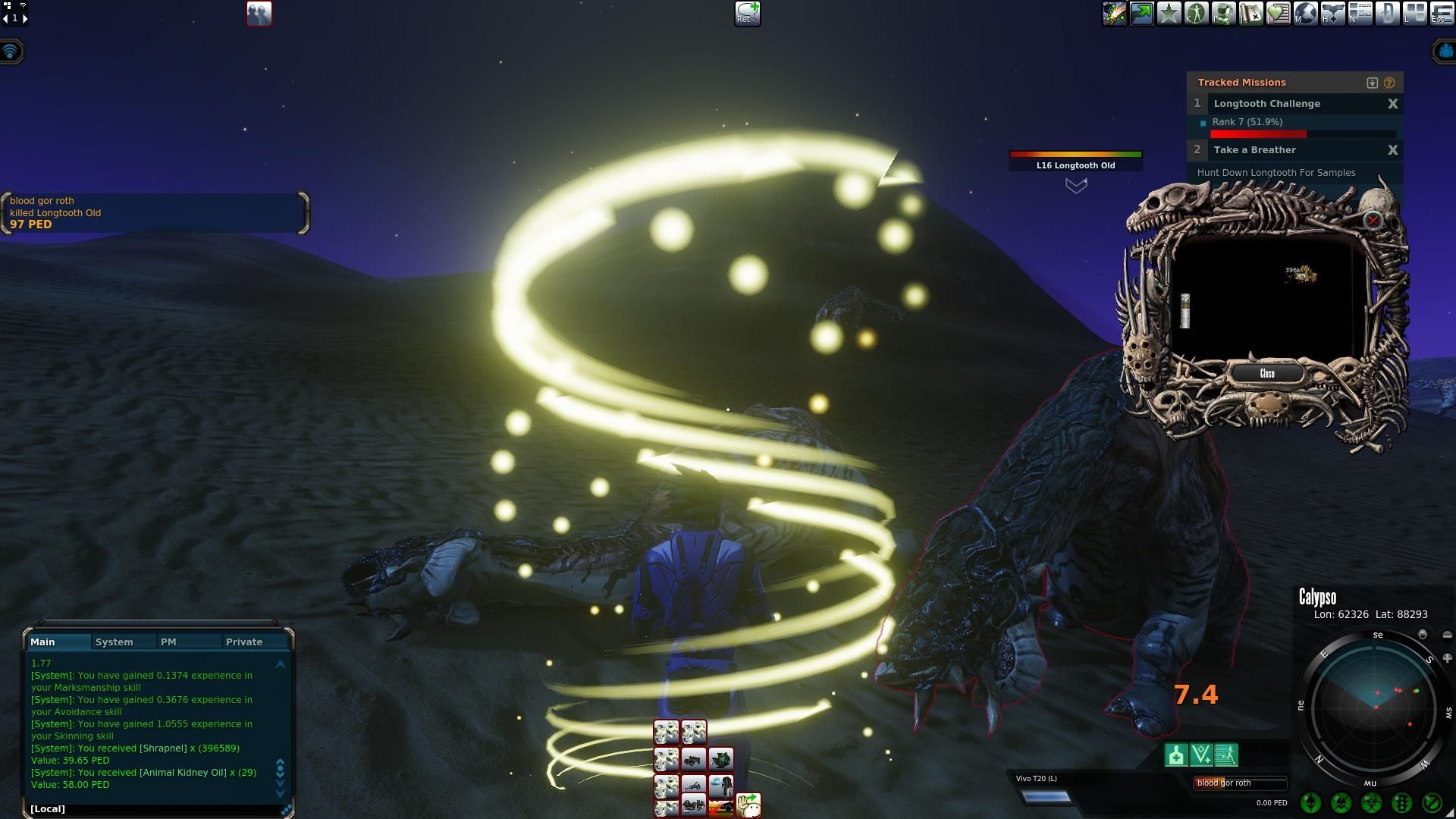 While I usually did my best to avoid getting aggression on more than one at a time. Sometimes if there was more than one person in the area as you are moving around you end up standing right in a spot that gets a respawn on you just as you kill a Longtooth.

Thankfully with the gear, I had on that was usually not an issue. Unless I was being lazy and not topping off my health after killing a couple of them. As seen in the screenshot above that I happened to get a global on while getting attacked by an add.

It seemed almost wistful having to pull out the healing device I use for in-combat healing. I hate decaying an (L) tool and one that was less eco than the one I got from Cyrene. It was however the price I paid for getting sloppy. Nothing like getting a perception gain right before you loot and it is global. I had been hunting around for it wondering if the other player would find whatever was causing the gains if it was not being a red herring. Sure enough players on both sides of me and I end up getting it.

It was also kind of interesting just how often it was either only shrapnel or sometimes oil along with it. It almost makes me wonder if I had stayed with just hunting more young instead of moving up to old if I would have found some more of those insane highly markup weapons. As this place seemed to be lacking them. During one of my hunts, I ended up getting a couple of globals within a short time of each other. I had bumped into the other players around me enough to take note of their names. At least one of them did not seem to be having the kind of fun day I was out here.

There are so many possible uncommon loots that can drop. I’m kind of shocked with how much hunting I did end up doing that I only got a couple of them. Granted I have no idea what is no longer possible to drop so for all I know I got a large amount of the items that could be. I however don’t think so.

At one point I went out to hunt these. Without even thinking about it I just shot one to tag it and bring it in. That is when I noticed it was no longer Longtooth old but a slightly higher maturity one. There was not a person in sight.

About a week after that the entire herd had moved through the area and there was nothing. I did check out a couple of other spot but they ended up being in the middle of nowhere from the best I could tell. They were just not as great in this area. While this was fun to do I’m more of the kind of player that likes to hunt quite a few different things in a given week if I can. This however would just be the beginning of a few adventures I would go on a while back on Calypso. Eventfully I would go off again and explore other planets.

In total, I did 30 hunting sessions on Longtooth ranging from young to provider. Before markup at the end of this all I would be down. Thankfully however despite how much pure shrapnel I was looting after markup, I was up a small amount.

While it was not a huge amount. For as much ammo as I went through I was expecting it to be more of a blood bath. Perhaps most people shouldn’t know I walked away slightly ahead. Quite a few players I’ve been hearing got flushed down the toilet on this event.

Granted those players usually were hunting a lot bigger things than I was. There also came a point where I stopped to look at my numbers if I wanted to grind another level and codex and decided I had enough. I got to walk away up.

I also gained quite a lot of skills throughout all of this. Skill gains are still something I don’t keep track of. Between getting a few levels of codes and hunting level 16 or so creatures for most of this. I did quite well all things considered.
I do wish my ranged laser weapons skills would have gone up further. It seems I’ll need to be doing a lot more hunting just to gain a couple of percentage points let alone the 2 and a quarter levels I need to move up to a bigger rifle.

Perhaps next year I’ll go even harder on this event. They tend it run it for most of the summer so you have quite a lot of time to partake in it. Some players seem to have been grinding this thing since the start. While a lot of players seemed to be waiting to see how others were doing before jumping into the fire.

It would have been nice to have walked away with a bunch of the special (L) guns that drop during this event. While I did sell the two I looted to help cover costs. There appear to be quite a few different ones as well that could be looted with what I can only assume to be much higher markup.