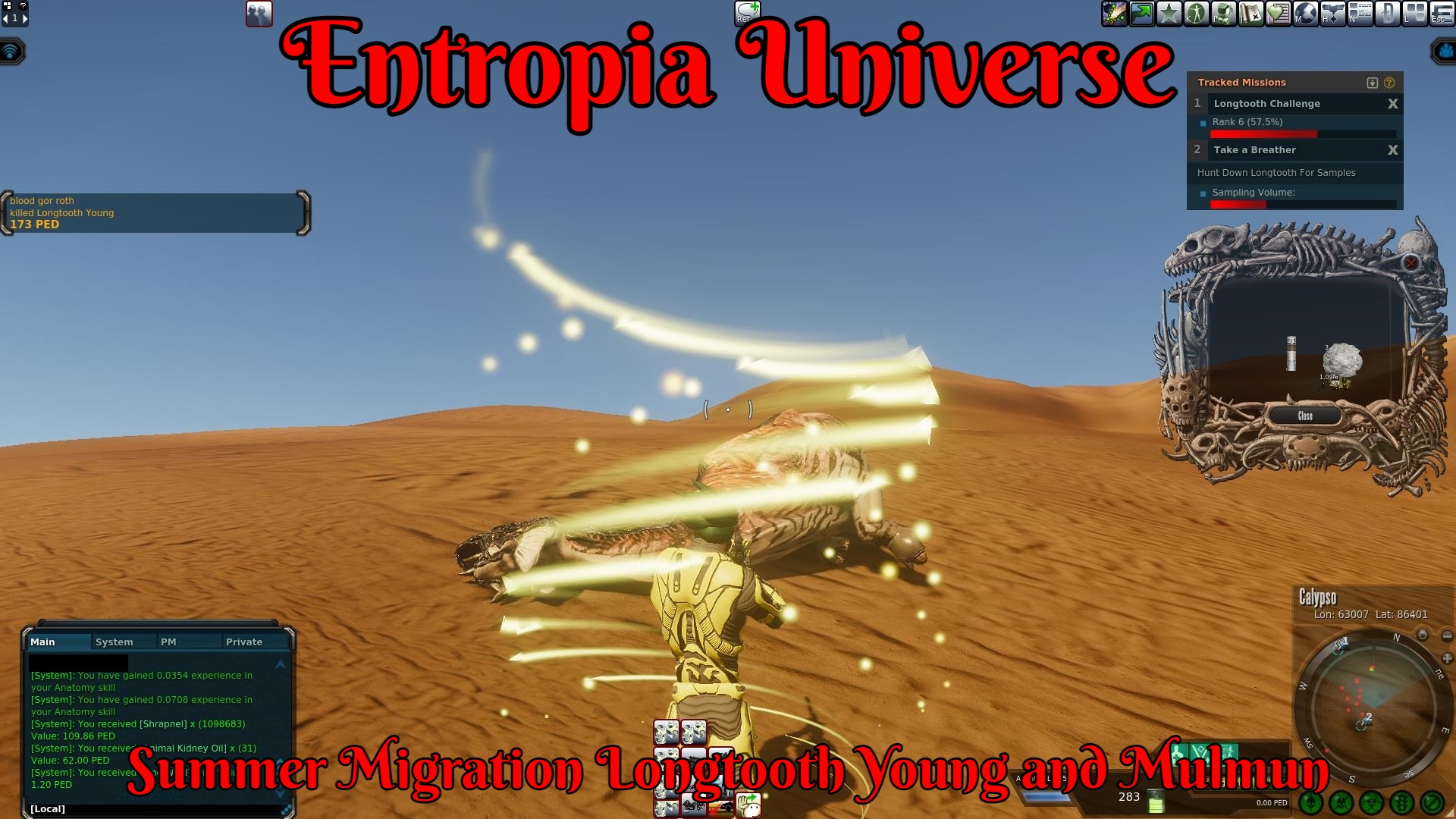 With how well hunting Longtooth young has been going for me I thought I would return the next day and continue my grind on them. As the days went by I notice fewer and fewer people hunting them over the long run. Many by now must be getting tired of the event as it’s a long one. 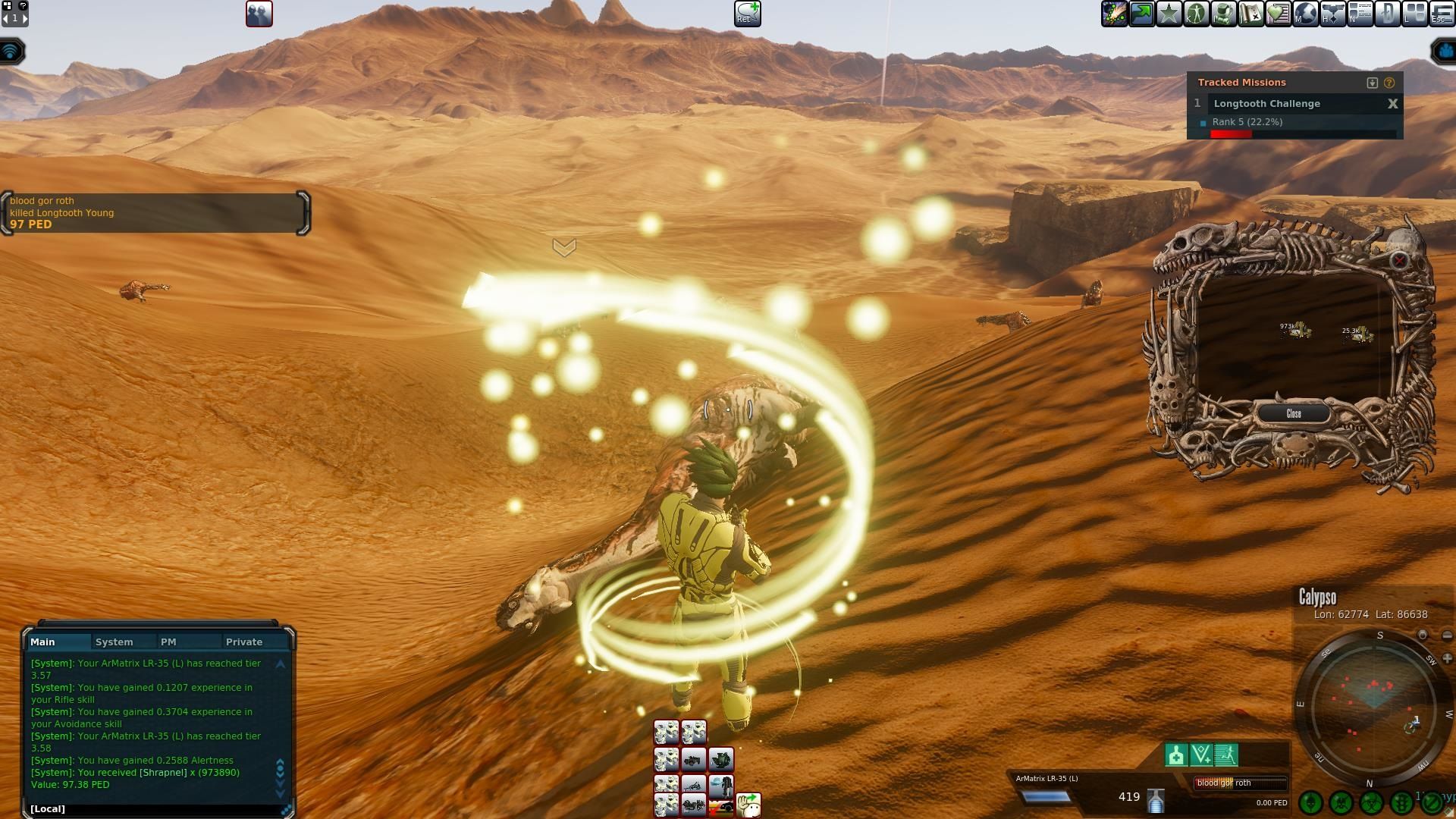 Nothing like the first run of the day and not that far into it getting a 97 PED global. It was sadly all just shrapnel. It was a shame a gun did not find its way into my loot window. This ended up being a much bigger killer than I was expecting.

As you can see on the map I have a marker placed down. I was getting a few perception gains and decide I could just kill everything in the area till I found some loot that was higher than normal. I was expecting a couple of extra PED not that much.

At some point in the future, I’ll make a post more dedicated to the theory behind the perception. For now, that goes beyond what these posts on the Summer event will be covering. You might even notice a few times throughout this I have waypoints placed down.

I don’t always just use waypoints as a way to create a tether location of where I want to farm around. They can have all kinds of purposes. This one at least ended up panning out quite well. 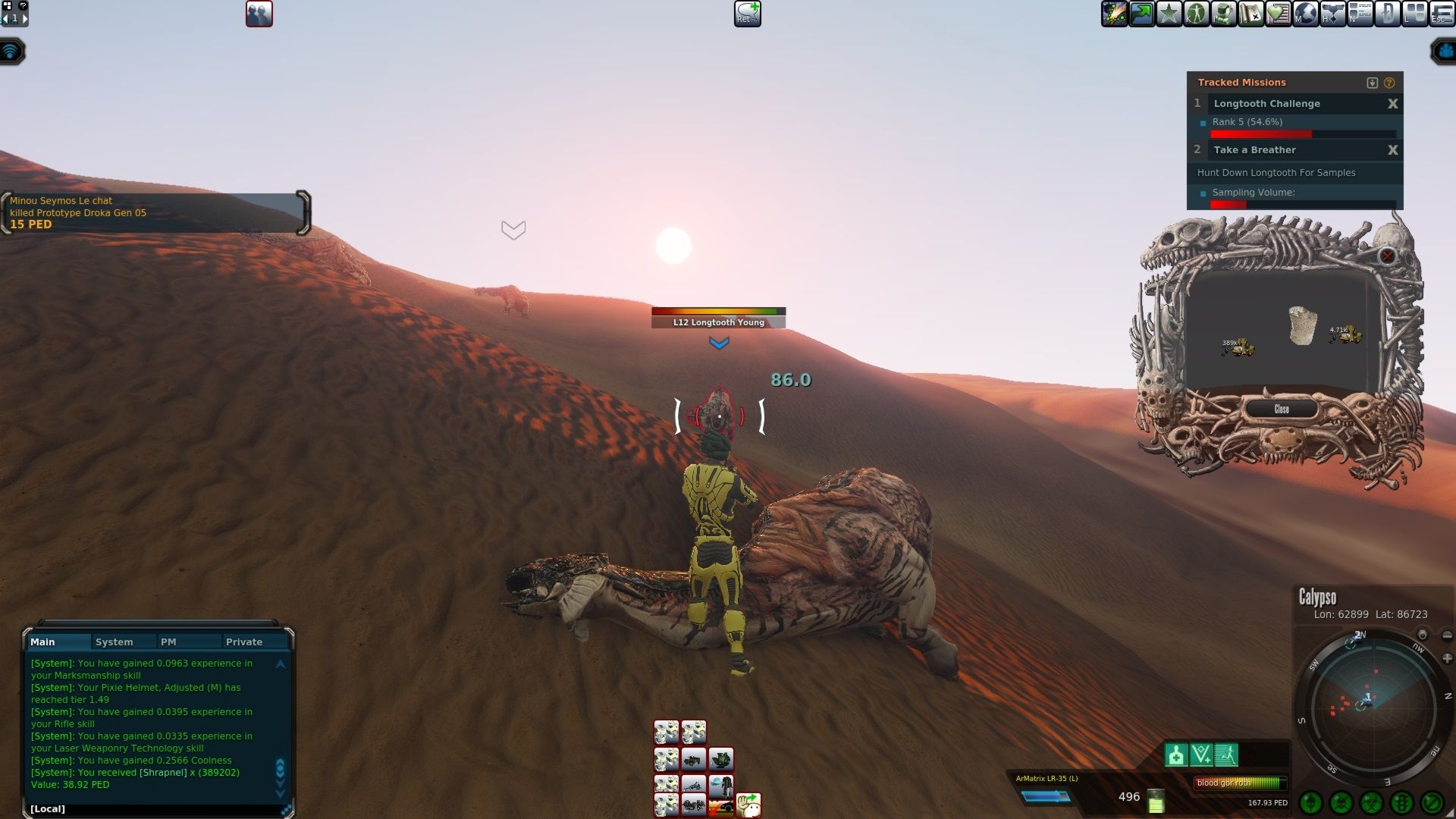 While the global trend did somewhat keep up on further hunts. So did the mostly getting shrapnel off these Longtooth Young as well. This for many players will be a total turn-off for even going near an event like this. While some insane items can drop worth a truckload many only a couple of lucky players will even find one if that during the entire event. There is a reason some times are worth so much and others not so much.

Beyond working on my Longtooth codex for some skill gains I was also hoping to finish off the Longtooth for samples mission for an (L) weapon. At the time this was still quite early into the insane amount of hunting sessions I would end up doing on Longtooth in general. That ended up requiring a lot more grinding than I was excepting. It was also a goal that I ended up failing to reach once I got a point of calling it on this event for myself and moving on to other things in the game.

During one of my repair and resupply outpost runs, I noticed the Longtooth Young heard was migrating away or being replaced in the area I’ve been hurting for quite some time. It was also the first time I noticed a Mulmun spawn was in the area.

As a result, I ended up doing one hunting run on Mulmun. It was not the first time I hunted some and I was rather close to getting to the next level of the codex for them. I ended up getting one global on them for just 50 PED. 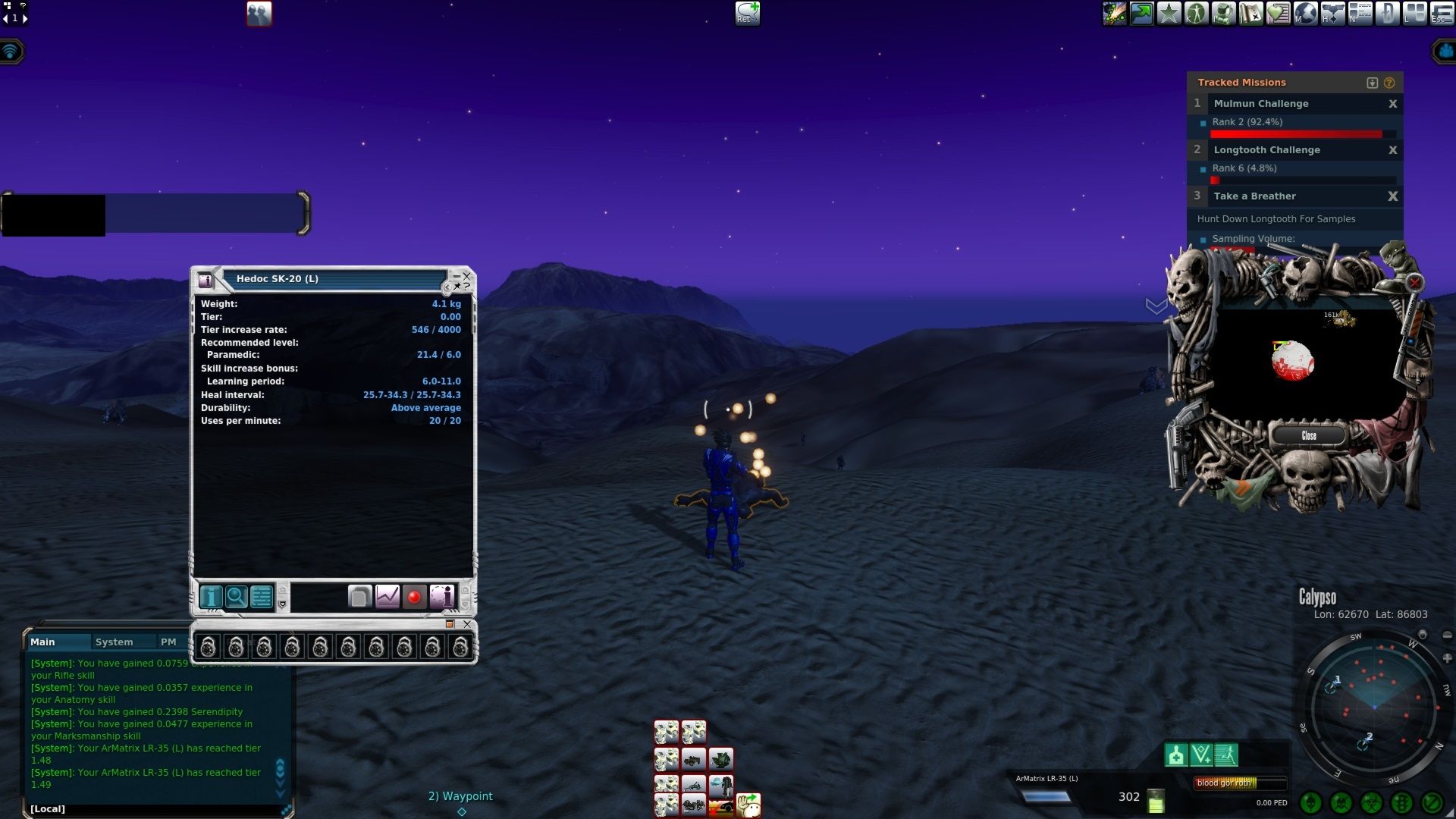 It’s a shame the Hedoc SK-20 (L) is not close to healing capacity as a Vivo T20 (L). At then at the very least it would have had some usefulness for me. While it did drop as full or close to full TT. I only sold it for a little more than the 43.80 PED it was worth.

If I’m not mistaken there is a very rare chance to get a UL version of that healing device as well off the Mulmun. This was of course not one of those instances. It is also kind of a weak healing device so even those are not worth much as it is only healing a max of 686 health per minute. I had almost forgotten that I did loot another gun during my Longtooth hunting trips. It was despondently an Omegaton Igni L1010 (L) and not full TT either. I think I did try to sell it a couple of times and it failed to find a buyer.

That was not the gun I was looking for. I was however quite pleased with how many items I was finding during these hunts. It is not often I’m looting guns or healing devices even if they are (L).

I loved hunting in this area filled with sand. There was this one giant hill that had a bunch of spawns that I would just pull from. Over time it seemed like the spawn was shrinking a bit to the Mulmun and only then did it feel a bit cramped hunting in that area.

Even when I was out here before a few times there were more than enough spawns for everyone. Outside of Longtooth long you would have one higher level Longtooth that would spawn in the middle of a bunch of them.

I’ll admit I did accidentally pull the higher level one a couple of times. I had to switch over quickly to my Gremlin armor to take it down. It also required a fair bit of healing. Other than that this area was smooth sailing and I spent many late nights grinding away without much thought in the world. 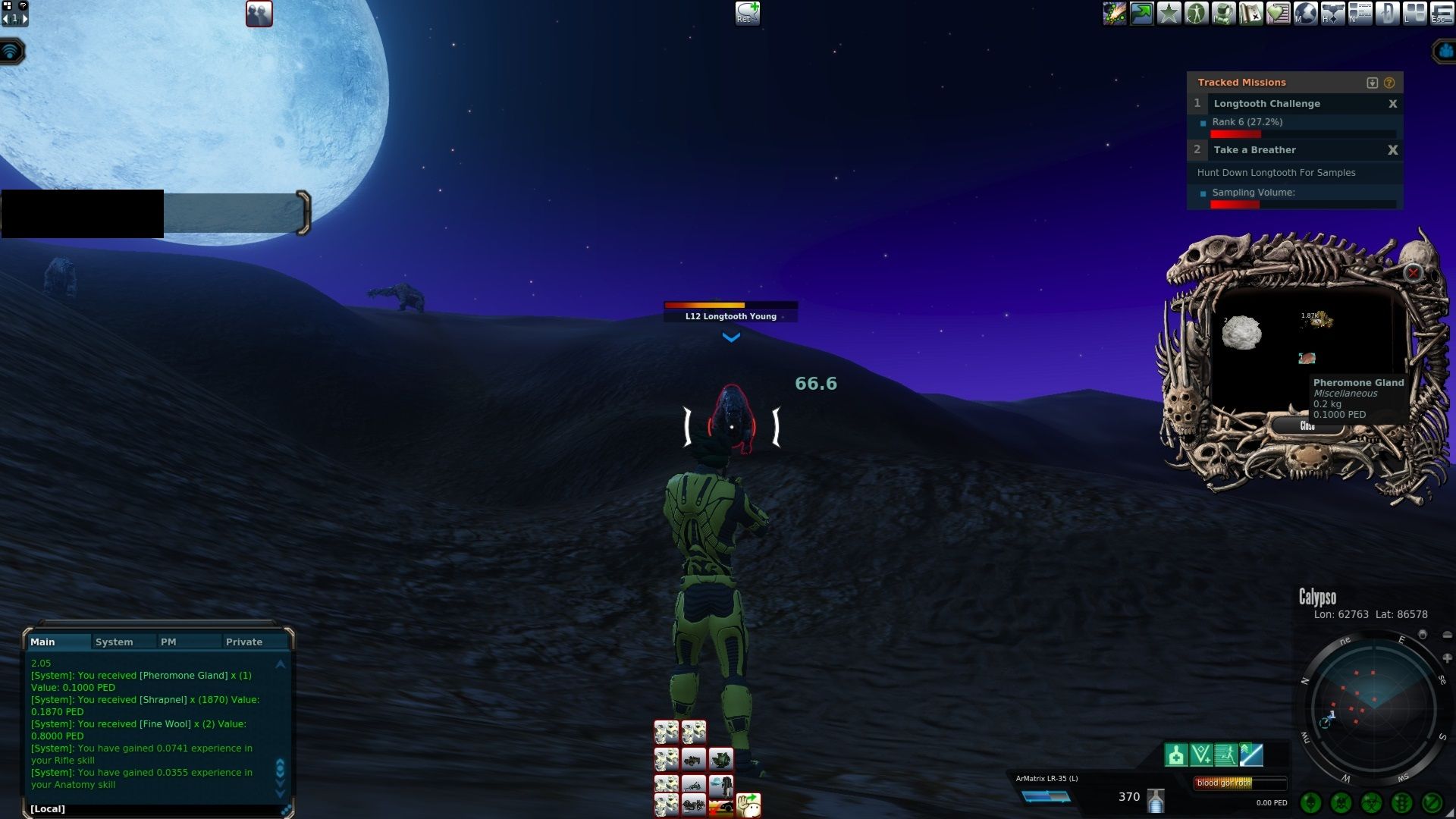 I ended up hunting Longtooth for so long that I even got a health point increase from all the skill gains. I also ended up looting a few pheromone glands off these young. While they don’t sell for a lot since they have low TT value; otherwise, a high markup percentage. At some point I might go and use them. If not, I’ll hold onto the glands and wait a few months and see if I can get a much higher price for them.

I also got quite a few more global on the young. At some point, the herd ended up shifting so far to one area, and the Mulmun were taking over more of the area I decided to find another place to hunt at. It was time to find something else to hunt and a bit harder than Longtooth young.