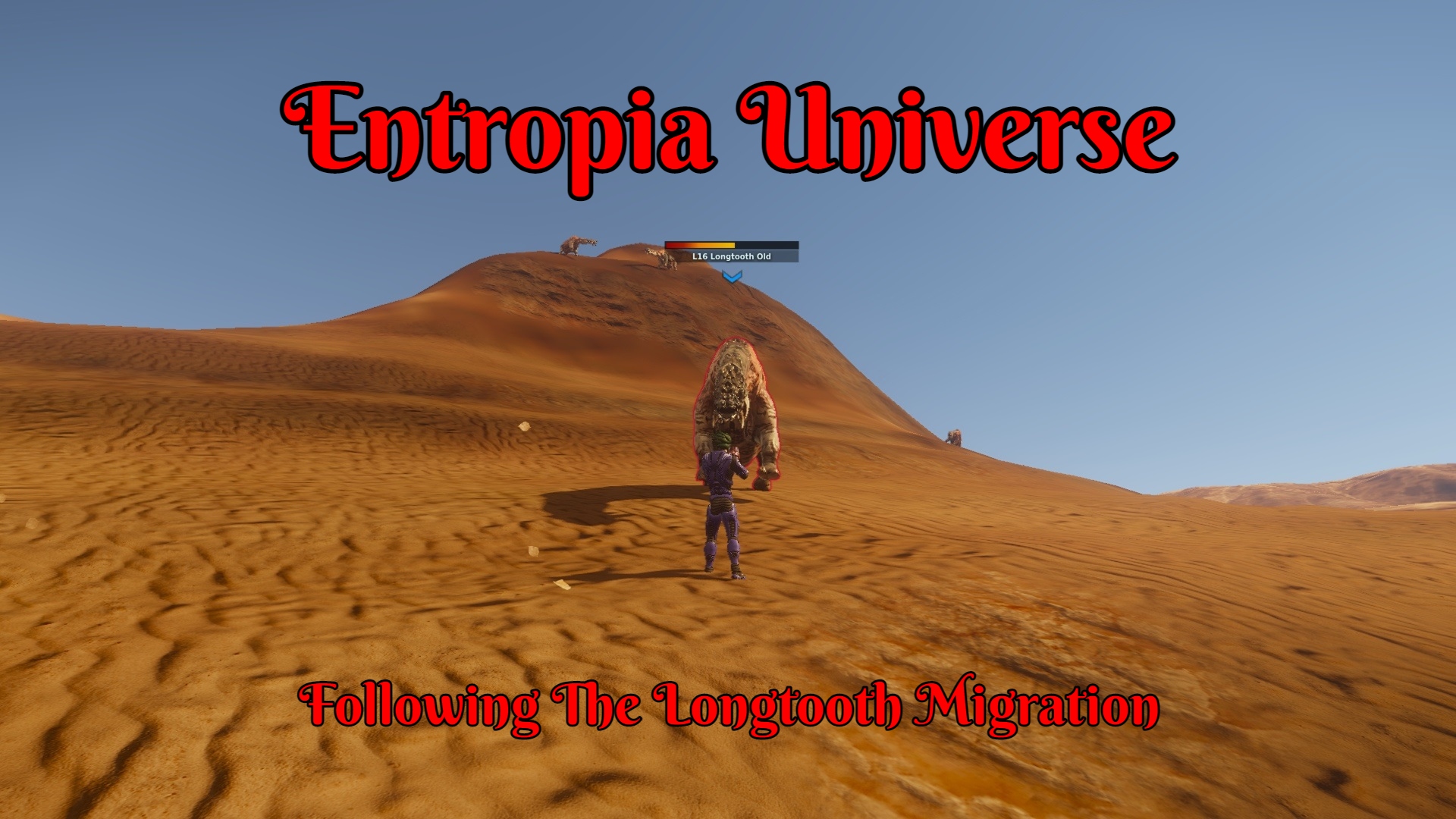 While hunting Longtooth at static locations was interesting. That is kind of missing out on the main part of the Summer Migration event. As time progresses during the event both the Eomon and Longtooth migrate along a known path.

Thankfully you do not need to put a lot of effort into finding the migration path. There is a post on Entropia Universe planet calypso forums that keeps track of what is where. It is run by one of the players of the game and people often leave a comment if it’s not up to date with the correct location. I ended up looking over there and finding some Longtooth old at the time were just outside of Cape Corinth.

Longtooth old was also at the time the most common one people were getting global on. For me at least that meant a lot of the player base what was hunting them was killing the old maturity. That would later change as the migration moved and harder Longtooth moved into the area.

At first, I wondered if so many players were farming old for possibly a certain drop they were the lowest maturity for. Since a lot of the loot tables online seem to be outdated from years back I was not quite certain of this.

Instead, it just seemed that the Longtooth old was easy to get to the location. This seems to have some truth to it as once they moved on players were hunting a higher maturity Longtooth from what I could tell with all the global people were getting.

While Cape Corinth can be a bit annoying since it had some no-ship spawn areas around the teleporter in. It is also attached to a massive building and you just got run through it to get back to the teleporter. You can at least take off from the teleporter without issue.
< center> 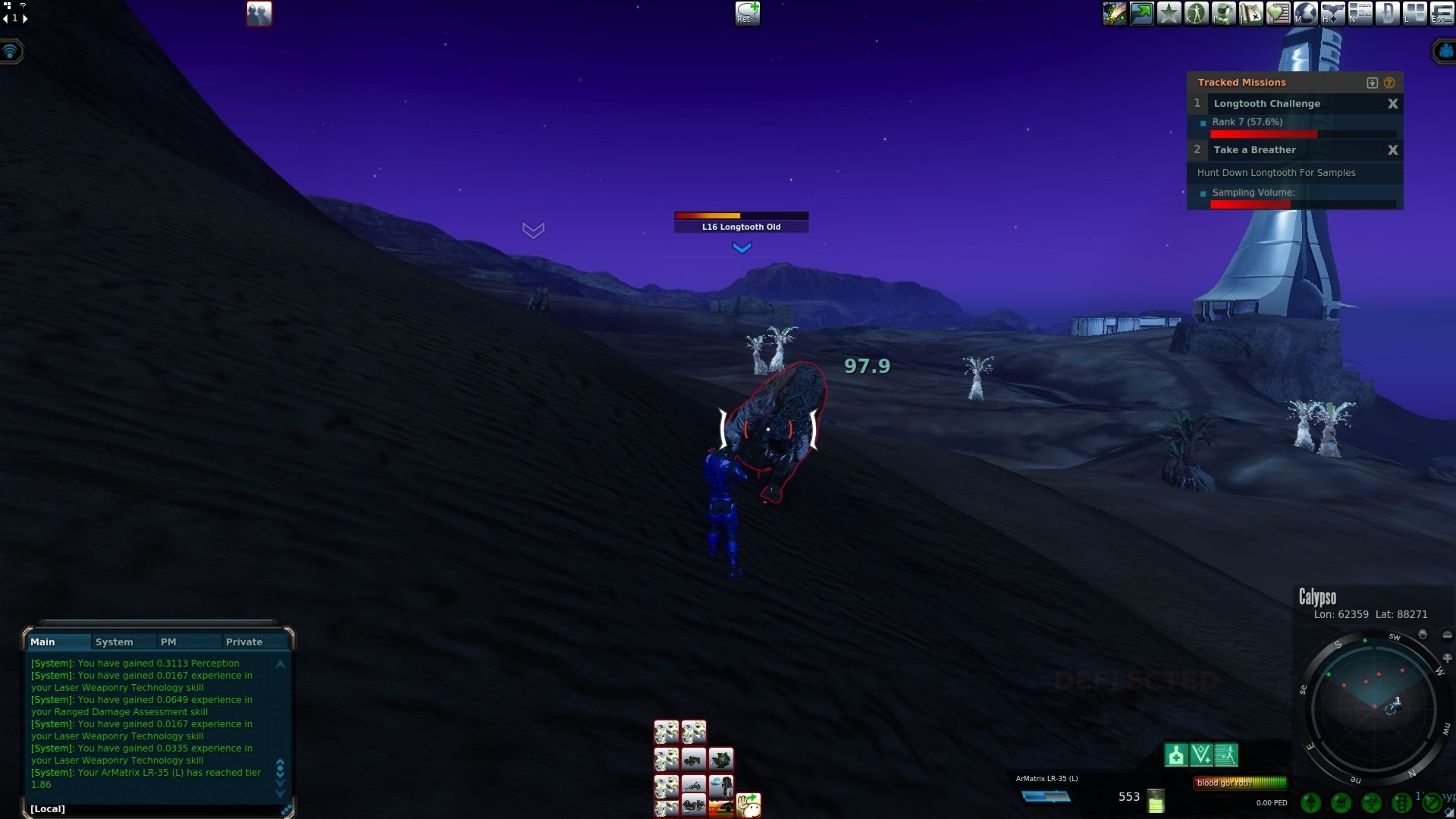 It also has repair, trade terminal, and storage just right inside the building. With a little bit of a path leading out to the area, you can hunt Longtooth. Making it quite an easy place to buy more ammo and repair when needed.

You can see in the screenshot above from the main spot of the spawn I camped at. Just how close the large building was. A quick flight and a couple of steps later and you were ready to go back out hunting some more.

During my entire time, I only got killed once from attacking without paying much attention to one of the higher-level spawns in the area. Otherwise, I had no deaths. It was also a quick flight back to finish off anything you got killed by.

While this area did have a couple of hills. There was also a lot of mostly flat land the Longtooth spawn was in. I can see why so many players were choosing this location to go hunting in when they had Longtooth old spawning here.

Since so many were hunting the old I thought why not and went to join the madness. I was expecting a lot more players there than what I found. There were at the time a couple of different places old could be hunted at. The area also was big enough that you could get a few hunters in there. 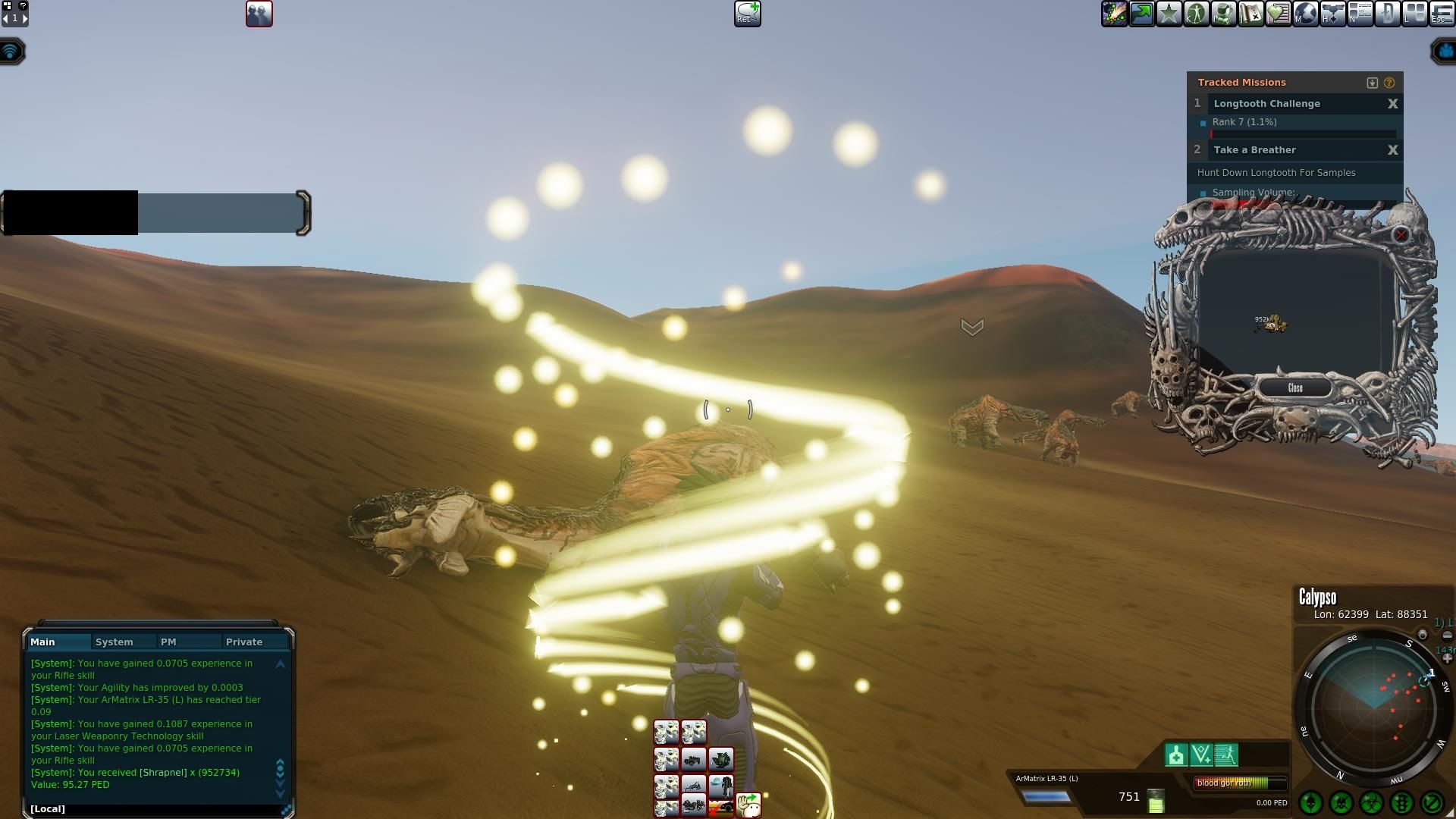 Not that long after getting in there I already got my first global of 95 PED. It was just shrapnel which is a bit boring. That is just how hunting these things mostly goes.

This area in the back of the spawn ended up doing so well for me that I seldom wanted to leave this spot. Anytime I did I usually had a bad hunt. Making me a bit superstitious about this spot. Which I can hardly be blamed for with how amazing some of the global I ended up getting were.

Almost at all hours of the day, I would run into a couple of players in this area. I did my best to avoid peak hours of the game as I did not want to be sitting around waiting for respawns and possibly having to fight over the spawn.

Thankfully I only had one incident where I and another player both shoot at the same creature at the same time. As soon as I realized the health of the creature was going way too fast I stopped shooting. The other player had a much bigger gun anyways so it would have been theirs for the taking.

The main difference between hunting the old and young was the old did enough damage I switch over to wearing my gremlin gear. While it was a little overkill I do not have something in between adjusted pixie and gremlin. I still had to heal every couple of fights. So it was way overkill.

Everyone else seemed to be wearing something about equivalent to me. The most important thing is just having enough impact resistance on the gear. As that is the damage the lower level Longtooth deal.

Outside of the damage these also had a little more than 600 health over the young. While I would kill quite a few less per hunting session. Some of the loot values were a lot higher as well. Just not what I was looking for. 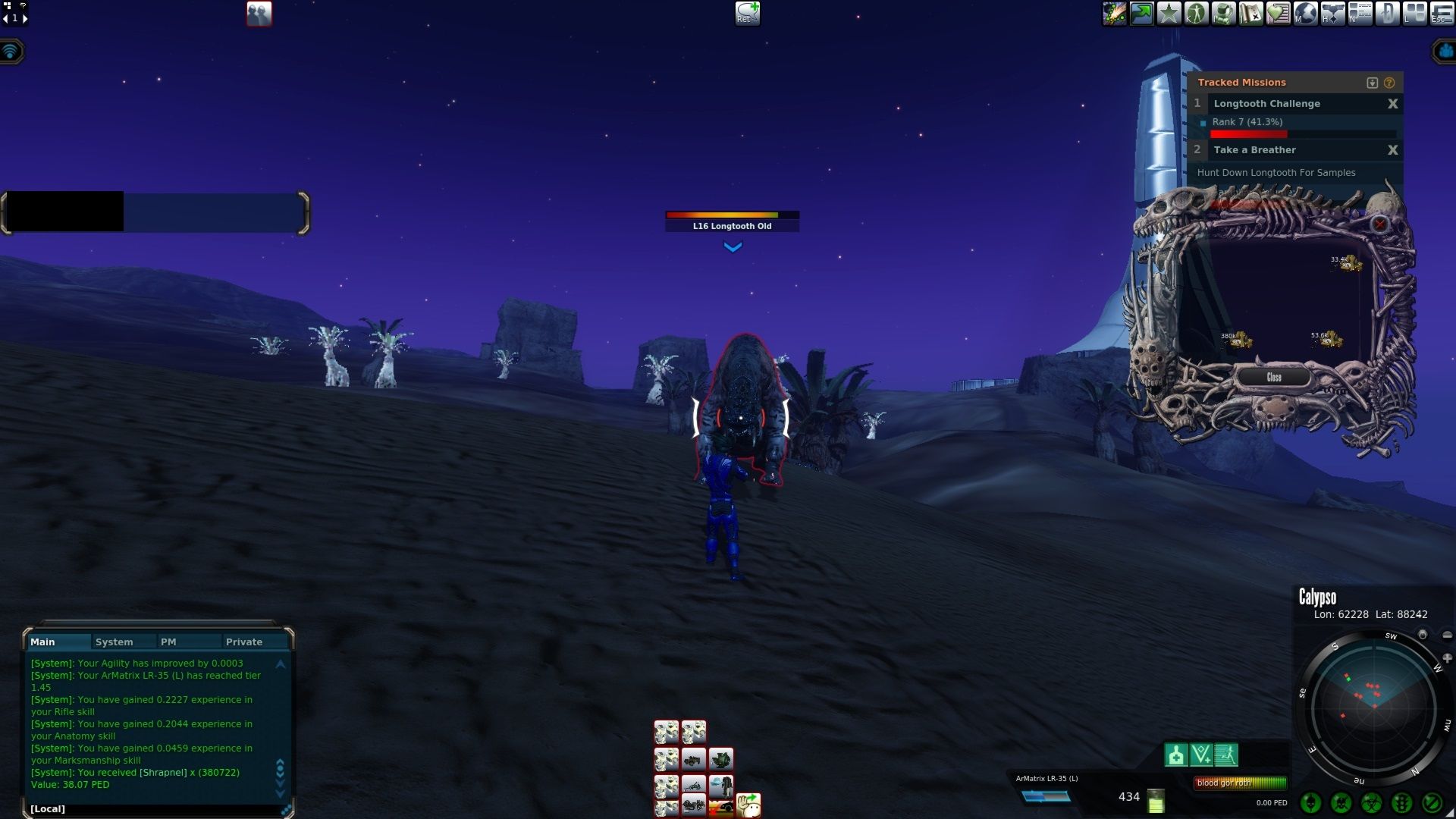 During one evening in particular this one player and I had been grinding out this area for quite some time. While I was not getting any global at that time. There were some decent small looters. While usually just shrapnel. It was a lot better than I was expecting. 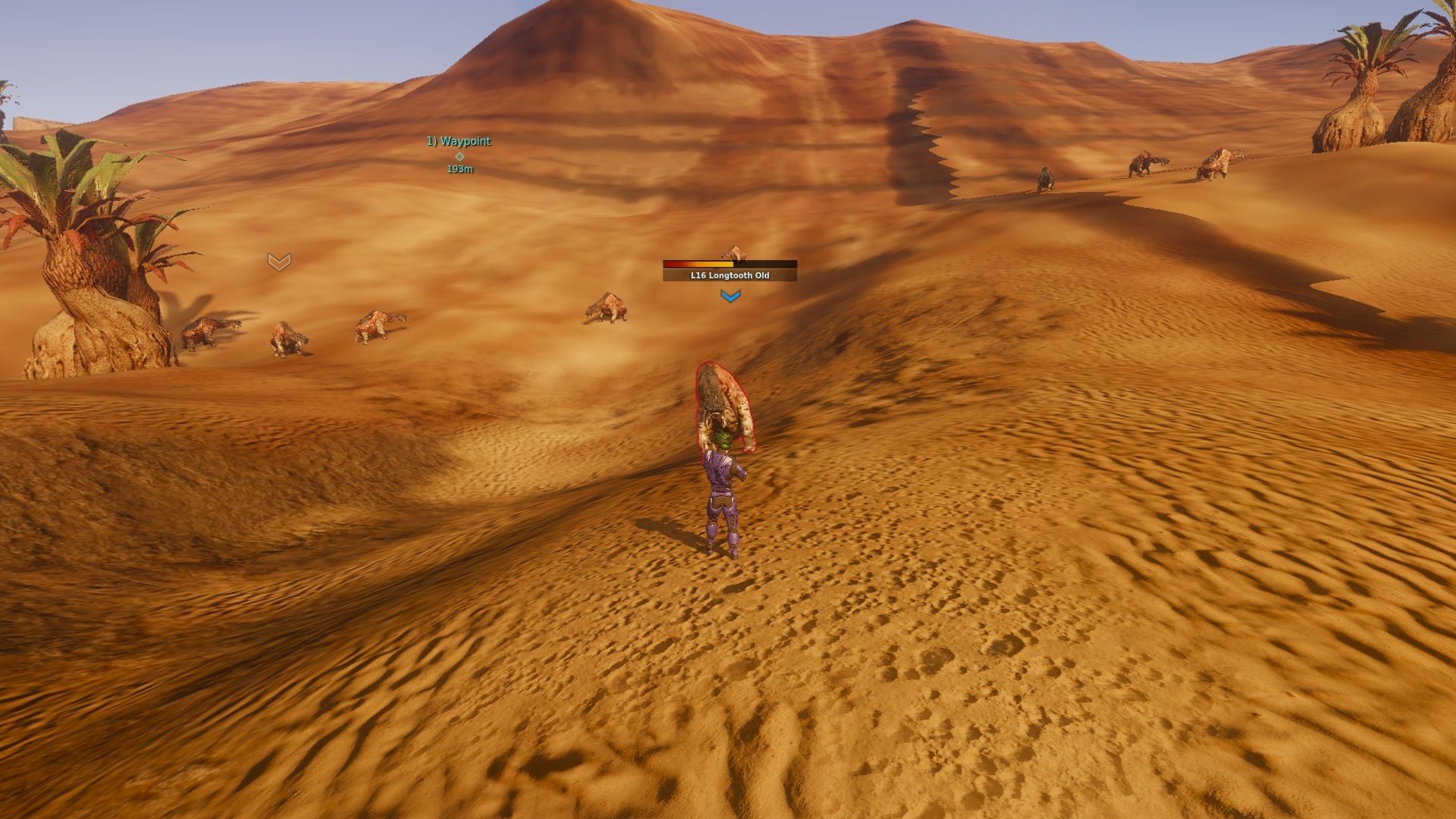 While no insane loot in my first few hunting sessions on Longtooth Old. The loot was good enough to keep me wanting to come back. Everyone kept saying how bad this event was. For whatever reason, I seemed to always be ahead or around break-even. After you add in the skill gains these were quite amazing to hunt.