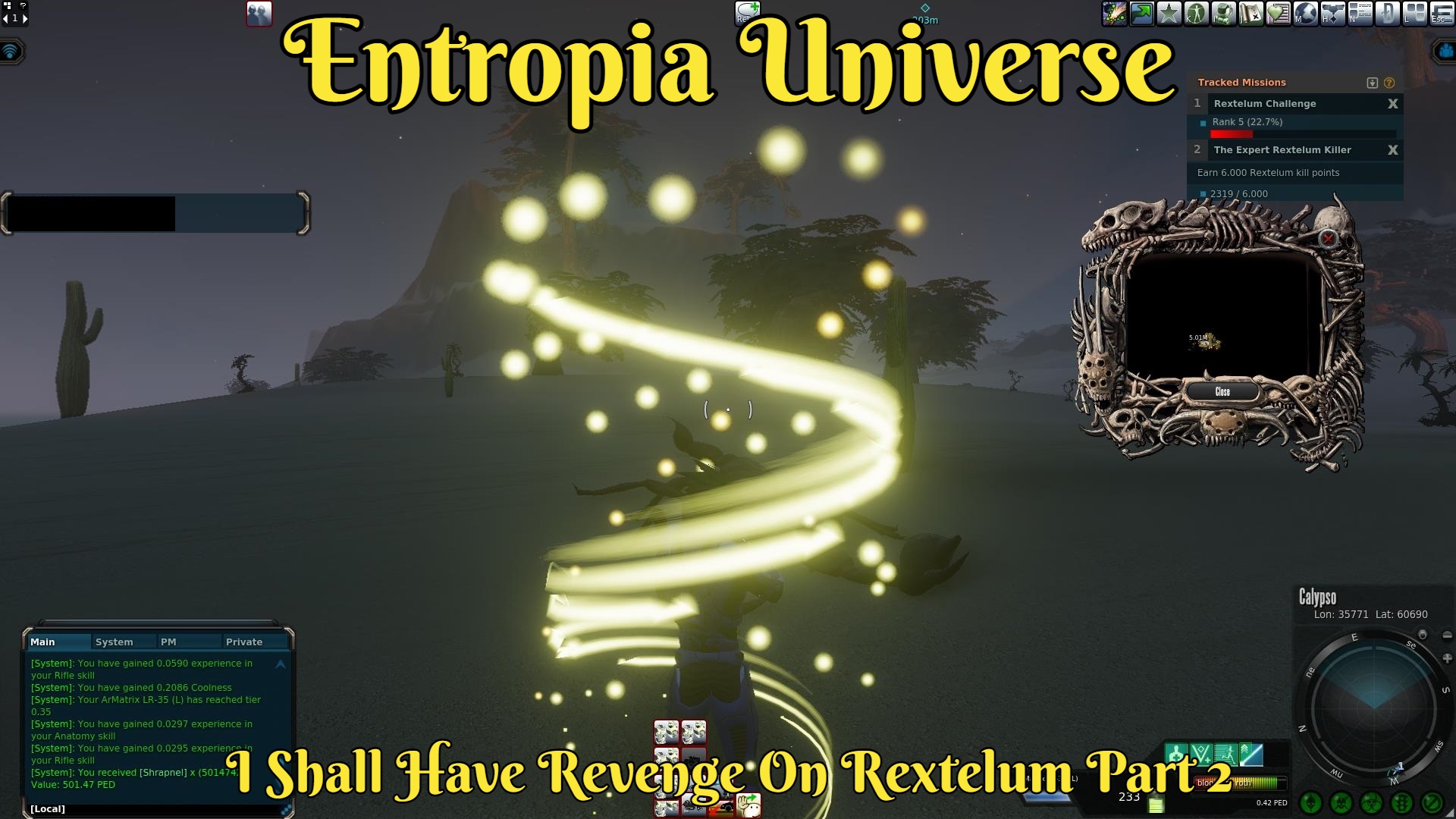 While I wanted to have my revenge on Rextelum I had no idea it was going to be like this. Many times in a game like this you often wonder after the fact why you made the choices you did. Things ended up going quite insane rather quickly.

I was back hunting Rextelum the next day. I had looted more than enough oils off these that I already had big enough stacks to start selling and having some PED coming in in case I was not getting enough shrapnel.

It was kind of crazy I would sometimes have hunted on these where I had enough shrapnel that they after being converted into ammo put me ahead on ammo. While it kind of sucks when that is the main amount of loot. The fact of the matter is sometimes it is way better than other common drops off creatures these days with the way prices have been going for items bought by crafters. I had known that Rextelum could drop Tier 9 components. I was kind of disappointed that I had to kill this many of them just to get 2.8 PED of it. The monthly markup for them was just under 300%. If these had been dropping at a far more common rate I could see a reason to be hunting this more often.

Getting loot with markup off Rextelum appears to be quite a rarity. I was still hopeful I’d get some other uncommon drops the more hunting I would do on them. There are a couple of items I would not mind having for myself if they were to drop like the (L) tiger gloves which I never did get. I went back to the grind and I even changed my location up a little bit. There are some amazing beach views at this location of the ocean. Granted the entire place was a desert island so a vacation home here with giant Rextelum wanting to kill you would not be ideal. 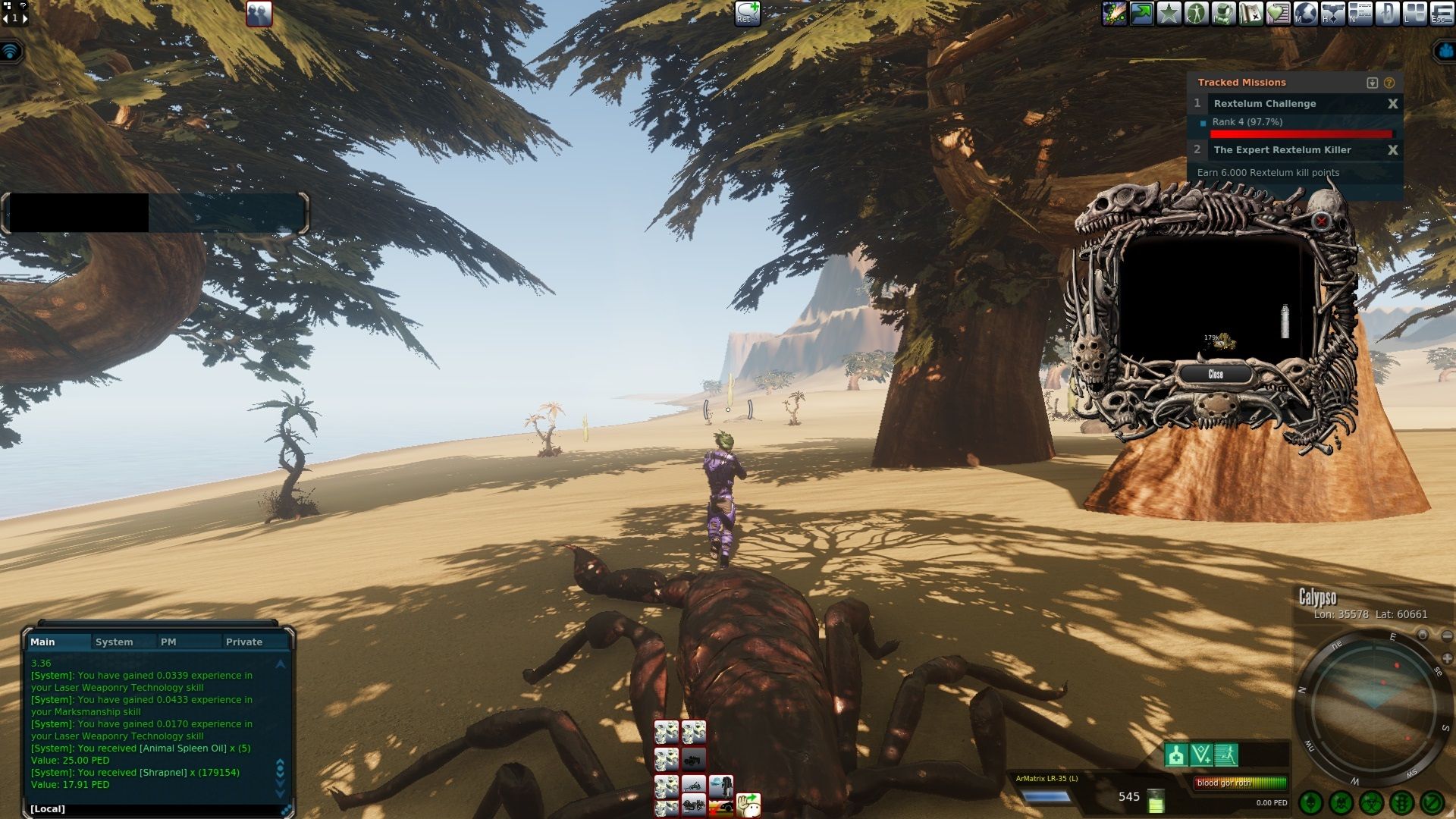 While not every run had a global. When you would get a couple of 30 to 40 PED loots on a run that would usually be more than enough to only be out the decay of my weapon, amp, armor, and any healing I would do.

I had become rather comfortable with this area. Before hunting something like this would have been a bit stressful. When you don’t know the layout of the land that well and you end up having to heal a lot. Over time you end up getting to this point of having a few areas trails almost to walk around on as you clear from one side to another before respawns.

I was starting to think my luck had run out on these. I have seen from the past hunting these can go quite bad. The kind of bad where you are down 50% on a run. I kept my eye out to see if the ubers had returned to their massive farming. One night I noticed someone had gotten a global on The Sand King. It was however not that large of one. 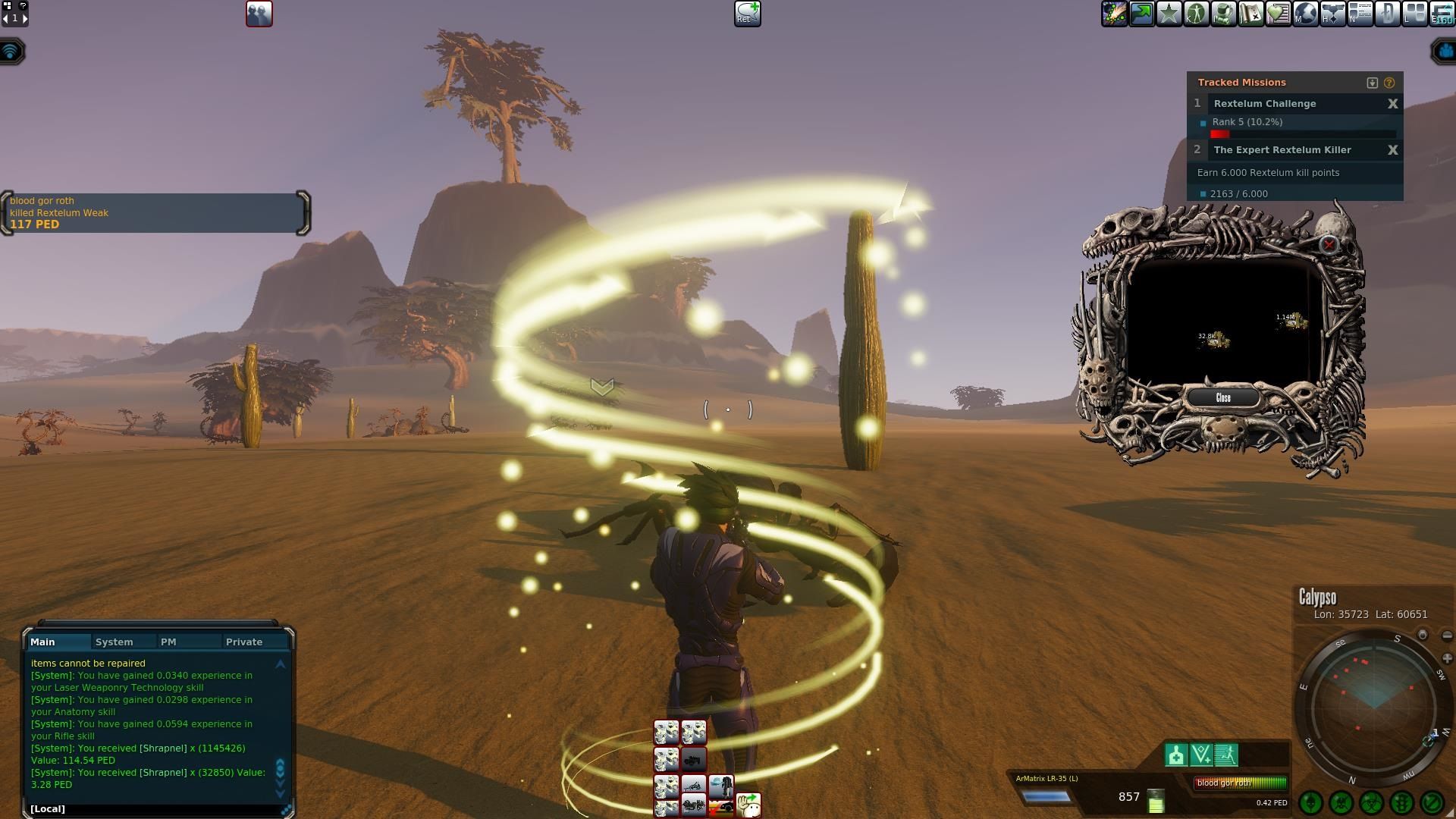 I had one run in particular that was insane. Shortly at the start of it, I ended up getting a 117 PED global. That alone would have made my usual run on a Rextelum decent. 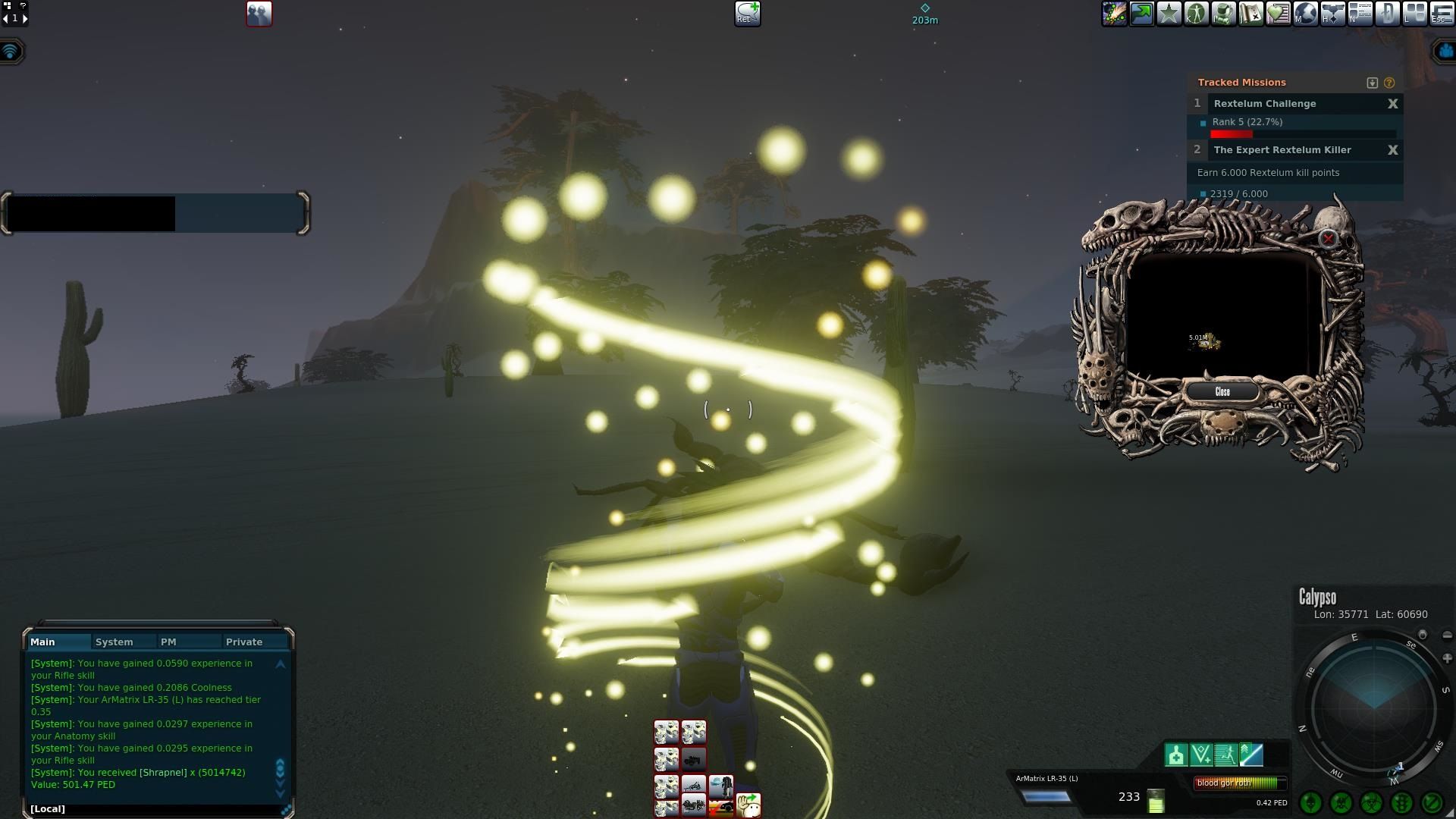 A few kills later with most of the hunt done I got a massive 501 PED global. While not my biggest ever while playing this game. This might be the biggest if not one of the biggest I’ve gotten since returning. It is a shame it was all just shrapnel. I needed a lot more ammo anyways.

I know a lot of players when they get a kill like that they will stop their run instantly. They will be done and head on in and take a bit of a break from the game sometimes. With not much ammo left I at least wanted to finish my run.

I’m glad I stuck it out. A kill or two later I got a 36 PED to kill. Along with a couple more kills that more than covered the cost to kill a Rextelum. 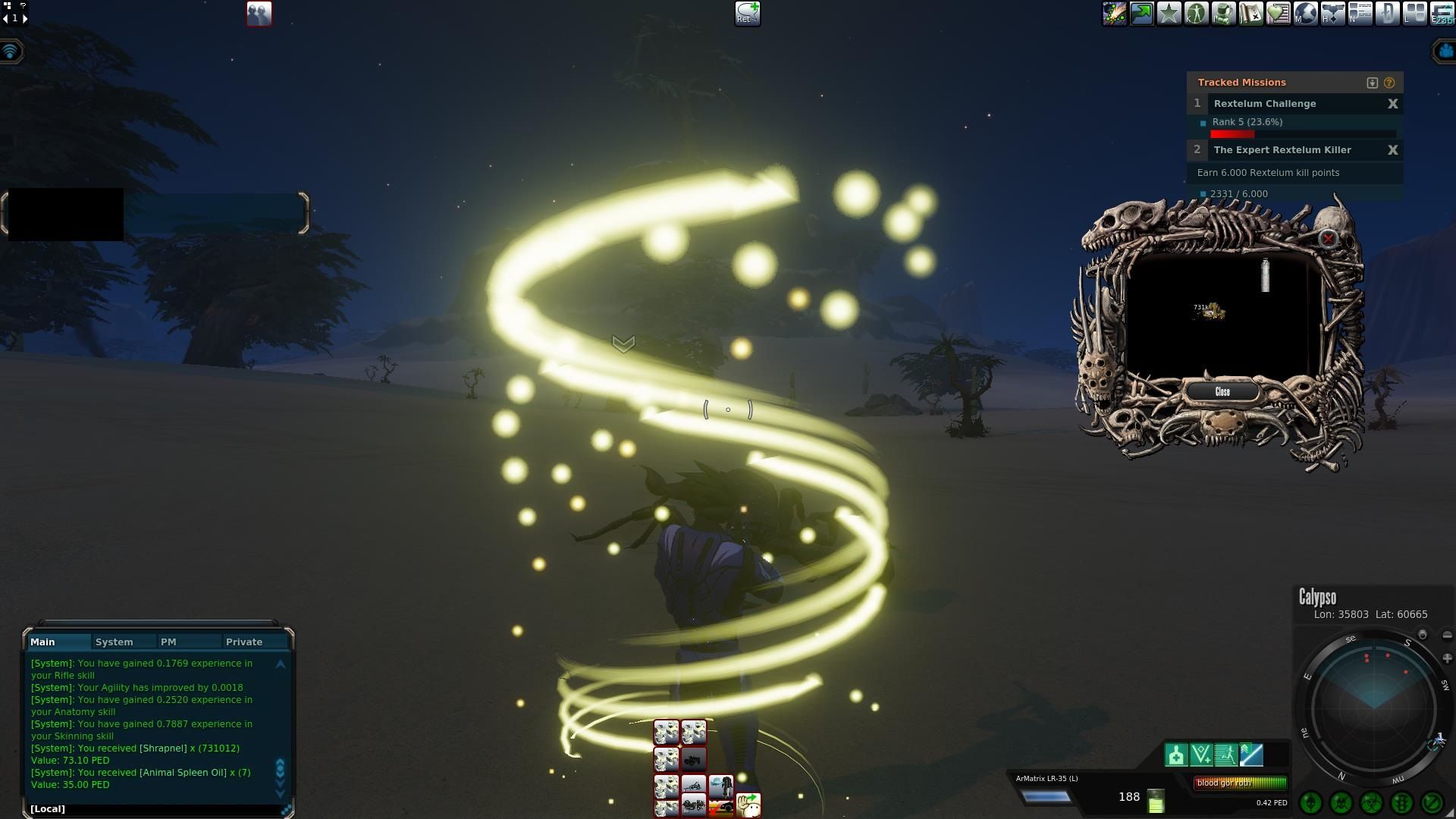 Then with only a couple of kills worth of ammo left I ended up getting one final global of 108 PED. When I say final global I do mean final global. Yet again nothing that great in terms of loot.

On just that one run alone I got all those globals on I was up just over 300%. Making it one of the better hunts on anything I’ve had in quite some time. It would have also been great if that is where this story ended. It is however not.

While I did call it a night that day. I ended up coming back a few more times. Rextelum ended up treating me like how they used to with some horrible runs and no globals. I also had noticed the ubers were back to farming The Sand King like usual. While I can’t say for certain that is the real cause for the loot to suck so bad usually. It is quite a pattern in my short runs and I’ll be taking a break yet again on hunting Rextelum. Thankfully I did have a cut-off point where if I was down enough I was going to call hunting these. While it would have been nice to work on the kill point mission and codex further I had hit that point and called it.

All my runs including the ones I did a few months back, I ended up still being up over 17% in total. It is a shame markup was not a lot better on hunting something like this. I have noticed many other players tend to focus on harder ones.

I however have not seen people going out and getting globals during the normal weekday as I was getting. A couple of times I’ve gone back for other reasons I’ve noticed the hunting areas were quite cleared out of players.

At least I got my revenge on these and had a blast while doing it. Not to mention quite a few skill gains and some levels on my codex as well. I still have quite a way to go on my current point kill mission for Rextelum. Something perhaps I’ll work on again at some point slowly over time.