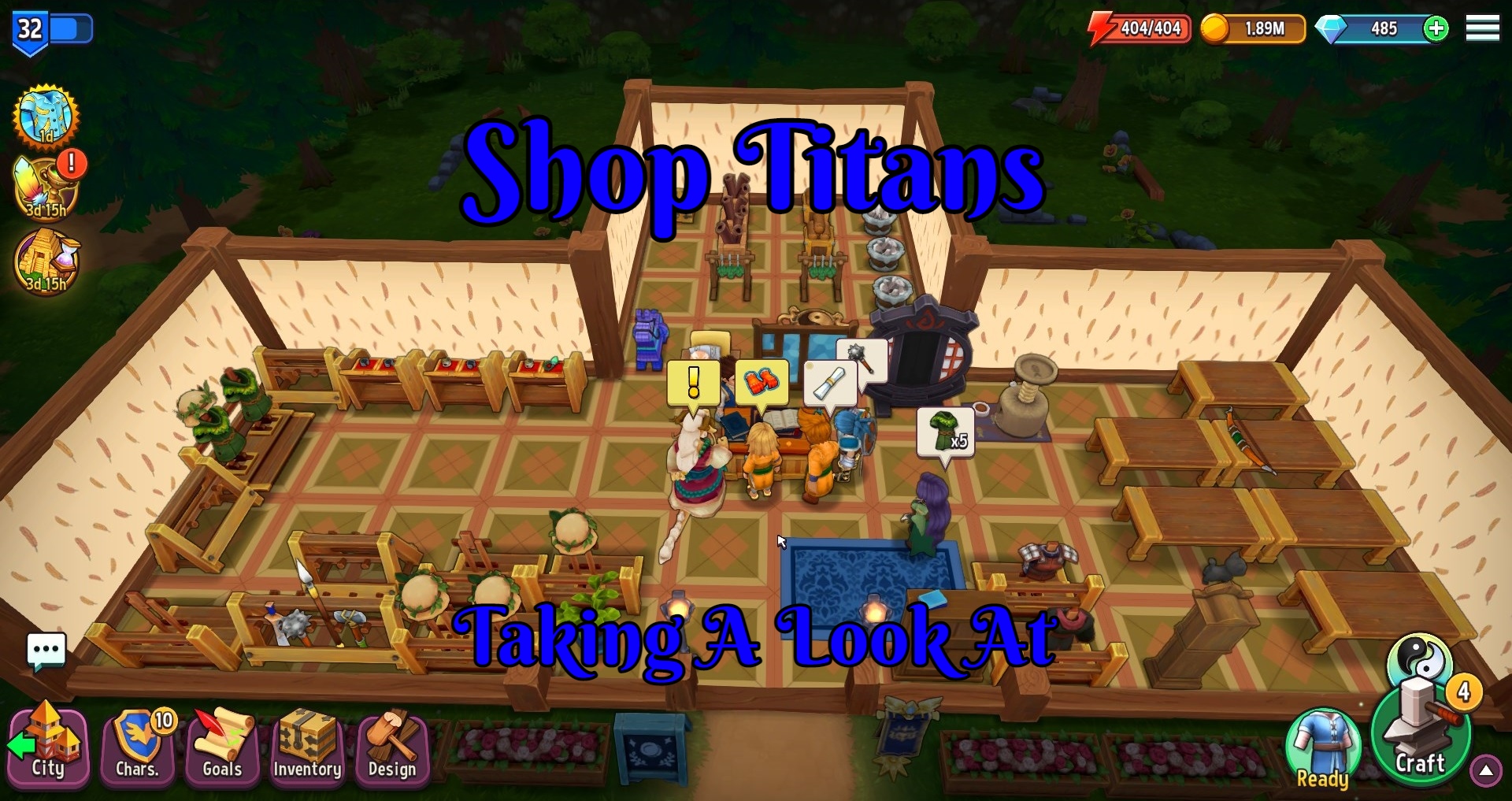 Shop Titans is a f2p shopkeeper simulation. You run a shop where you can craft all sorts of different items for an RPG fantasy world that you sell to heroes for whatever adventure they are about to embark on. You can hire heroes and send them off to do battle either solo, in a group, or work with a guild against many different creatures and bosses.

While the game can be a bit casual it is not an idler. You need to be active in negotiating prices for items and agreeing to sell what you crafted. The shop shelves endlessly always need to be restocked which requires you to have the crafting ingredients. You are also managing your parties that you send off to do battle with creatures for resources among many other things this game has to offer. During the early hours of starting the Shop Titans game, everything is quite relaxing. You have very little shelf space and it’s not that hard to out craft the maximum amount of items your storage can hold. You are in this tiny little square and the only thing you care about is making very basic items.

The tier 1 items for the most part required just one or two different crafting resources to produce. Over time you gain the most basic resources: stone, wood, leather, and herb. These resources are generated from bins you can place down in your shop. Since the early shop is quite small you usually only have one of each type. 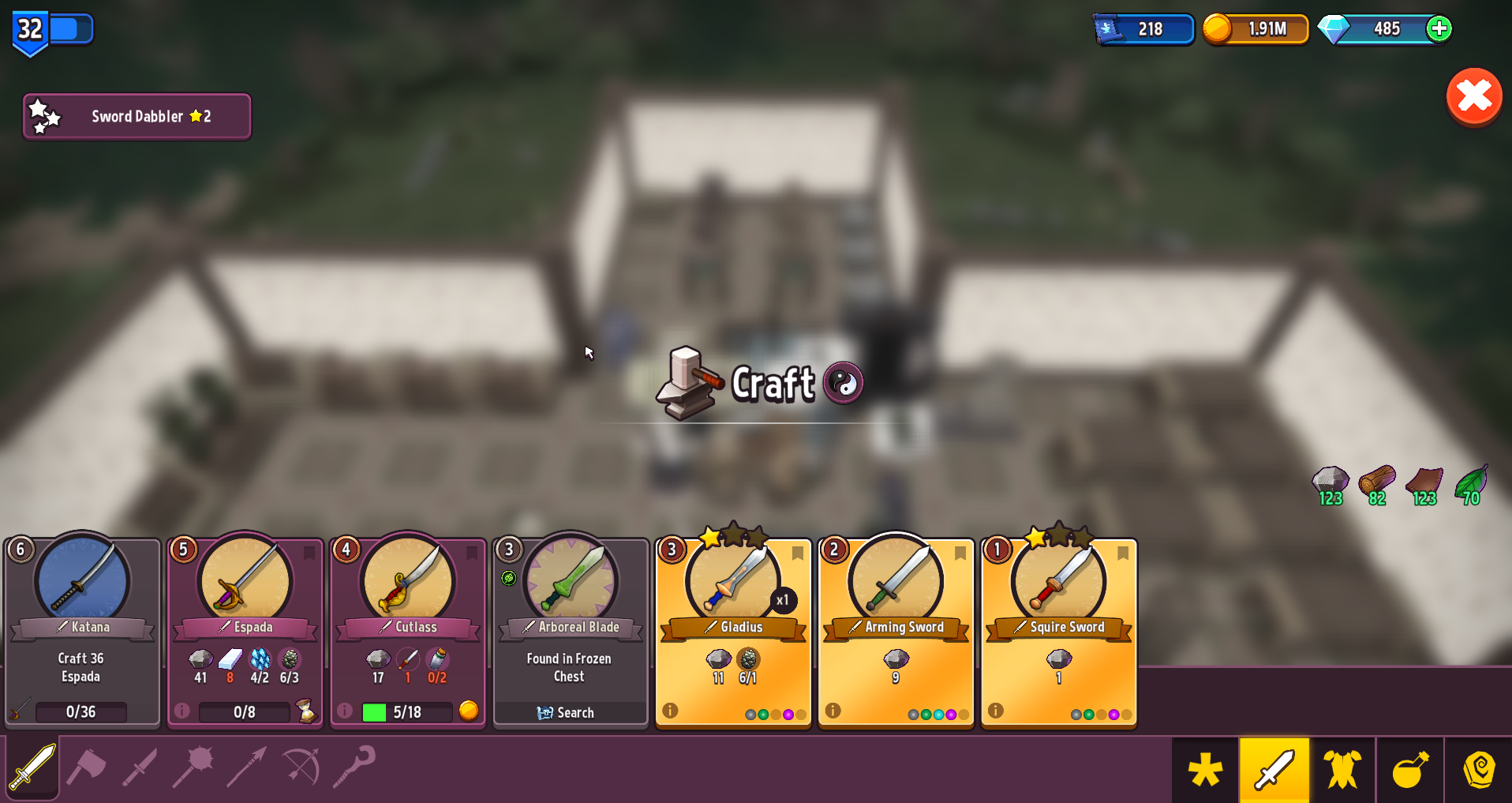 The further along you get into the game the higher the material requirement and amount of time it takes into creating an item along with requiring harder getting resources. The game also has a lot of grinding crafting items till you have made enough to unlock the next tier blueprint for quite a few items.

Unlocking higher-level blueprints is not always the case of just craft grinding lower-level crafts in the same item group to progress along. Some blueprints you have to buy from the cash shop or luck out and loot out of the chest.

While you will loot a lot of chests from sending your heroes out on adventures. As with a lot of these games, the real cost is acquiring the key for those chests. You can get lucky and on rare occasions loot keys. I have only been “qualified” a couple of times to in fact loot a key. 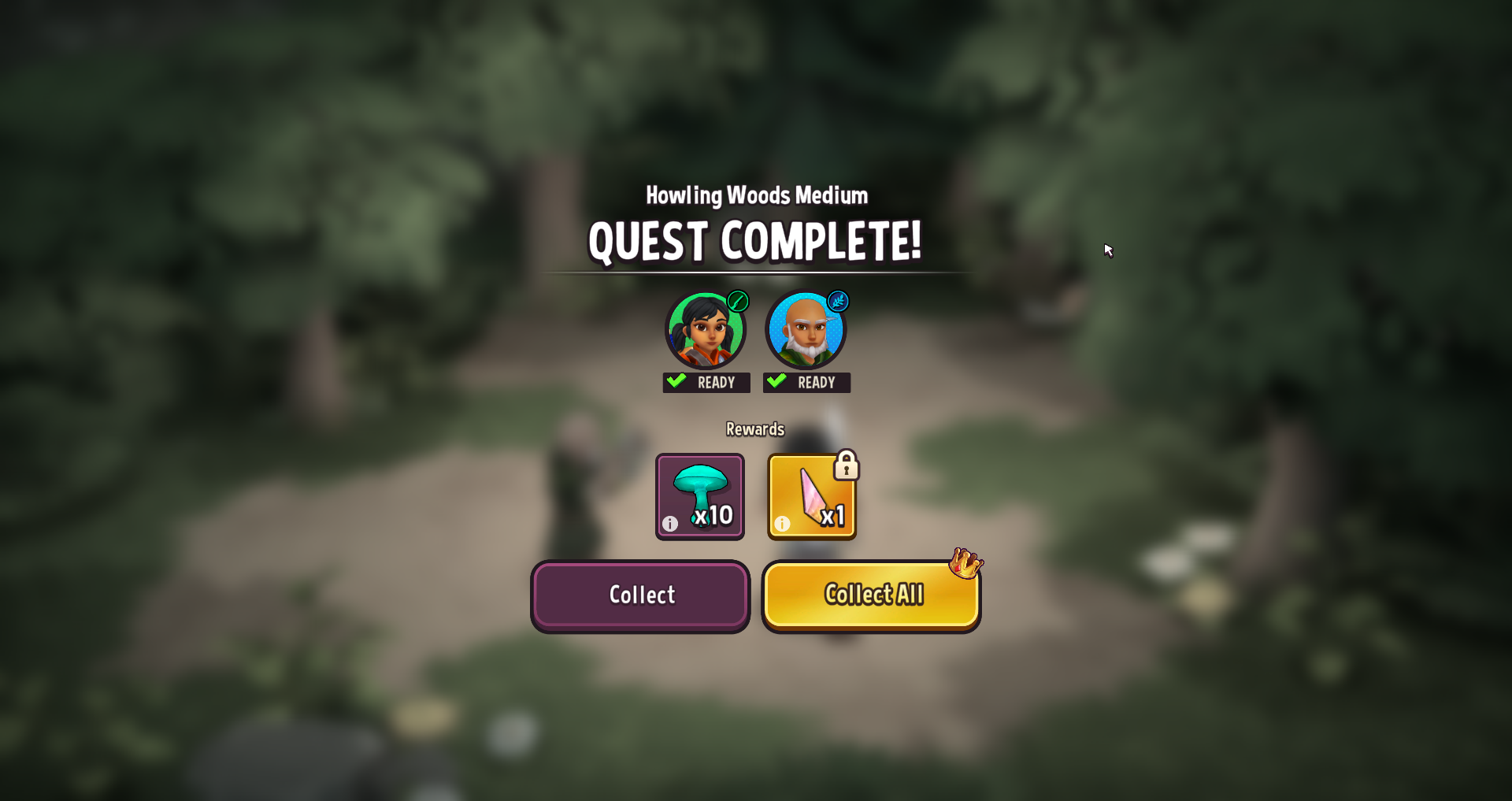 A lot of times when my hero has finished their adventure mission and I click to see how it went and what kind of loot I got you don’t get to collect everything. Rare items and usually if a key dropped end up in a locked looting slot. For that locked slot, you need to be paying a monthly Royal Merchant subscription fee of $9.99 a month. While that Royal Merchant subscription does unlock a few other features and rewards in Shop Titans. This is not one of those f2p games where you simply pay a monthly subscription and unlock everything in the game. There is a full-on cash shop that offers a page selling gold, diamonds (premium currency), and many other items. These are used in speeding things up, further crafting slots, further shop room unlocks, NPCs, and premium crafting blueprints.

The good news is many of these items you can still get playing as a f2p. You do get a small number of diamonds from playing and end-game players tend to sell crafted items to other players for diamonds. You do get hero coins, research scrolls, ascension shards, and many other things slowly over time just by playing. You can also still unlock many features by paying gold and waiting a long time. Such as increasing the size of your shop. Along with unlocking further crafting slots. You can also increase item shelving levels that increase engery capacity and on certain levels upgrades will have further effects such as more storage space.

I’m not the biggest fan of games doing popups every so often when you reach a certain milestone or something is going on in-game that they are trying to push you to buy a packaged deal. For the most part early on it seemed like they just wanted me to pay money to quickly advanced along the game by having a bigger shop or more crafting slots that I’d earn over time just by playing.

If this was a single-player game these kinds of offers would not be so bad. However, it is not. Being active in a completive guild is also quite a huge deal. You get the benefits of having higher-level guild buildings which influence how fast resources are being generated down to things like the highest level your works can be.

Guild buildings themselves require the players to invest gold or diamonds to progress them along. Once enough is spent for each level they can be upgraded which usually takes a couple of minutes. The more you have spent on a single building as an individual the higher it costs over time to keep upgrading that building.

This makes teamwork in upgrading buildings through the guild quite important. In the low-level guild I was in, each building I wanted to increase the investment was costing me 8k gold per investment and it took 170 total investments to increase that building one level. 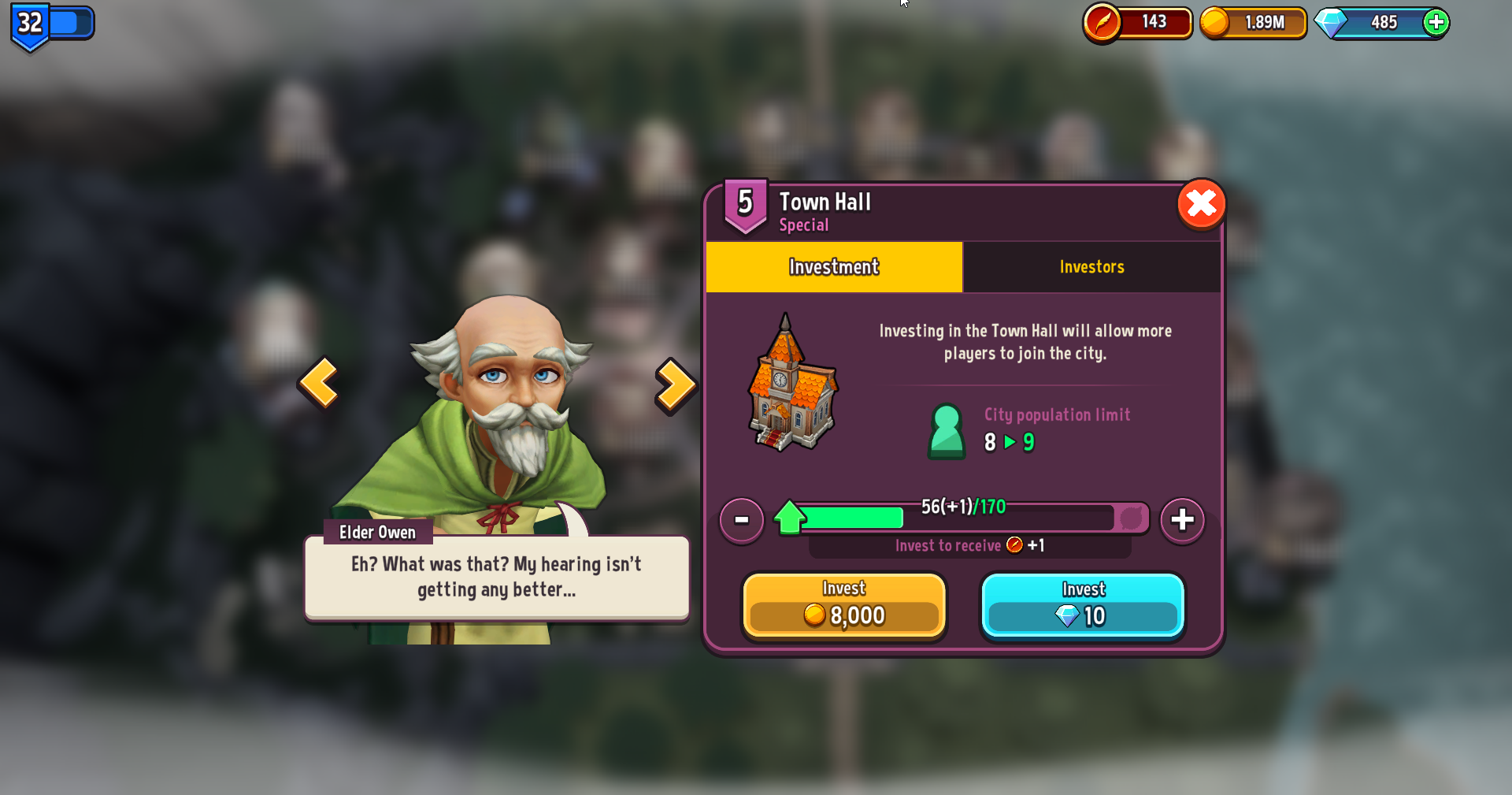 Trying to power level your way through a building all on your own is going to get costly in Shop Titans. Making this game requires working with others in an active guild that spends a portion of its total gold earnings on investing in buildings. Otherwise, you fall far behind anyone not embracing the guild system.

One neat feature this game has that I felt was a wise choice is an individual’s investments remain with them. If I have invested say 10 million gold total into buildings and decided I want to go to a different guild. I take that 10 million investment with me to that new guild I go to.

This is also the way many players can remain in a guild or move up to a more powerful one. Many guilds have a certain investment threshold to join. Those guilds also want to keep their active players from taking their investments elsewhere.

Being in a more powerful guild is important beyond just having higher level caps for workers and increased resource generation. There are a lot of events that take place quite often. Where if you want to place well in them you need a decent guild full of active players contributing to those events. 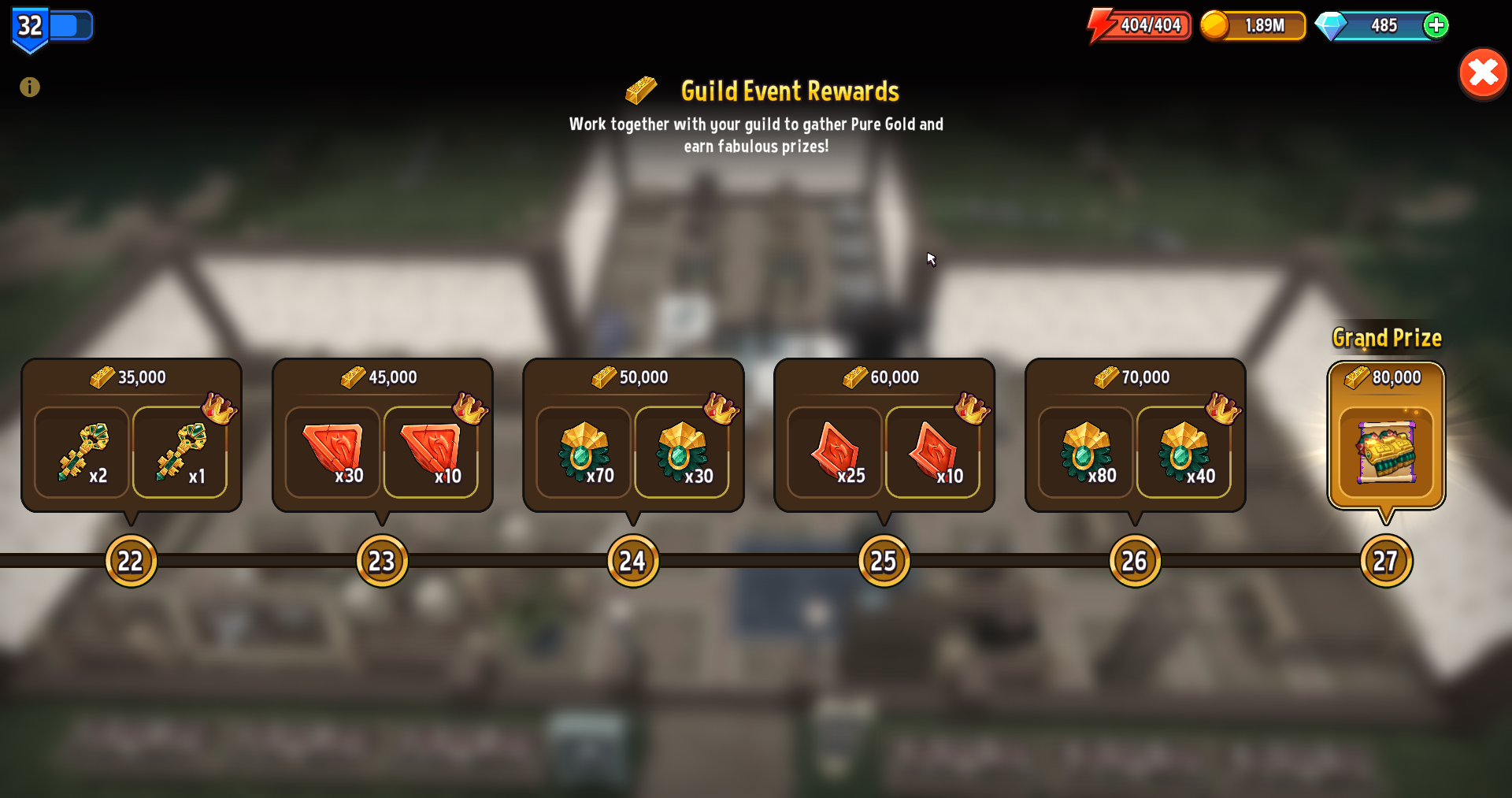 These guild events come in a few different flavors. For the ones I have partaking in you are usually sending in your heroes and champions to fight a boss. There are also ones where you are crafting and donating gear towards the cause. In hopes of earning higher prizes such as blueprints, diamonds, special chests, crafting resources, NPC tokens, and many other things. 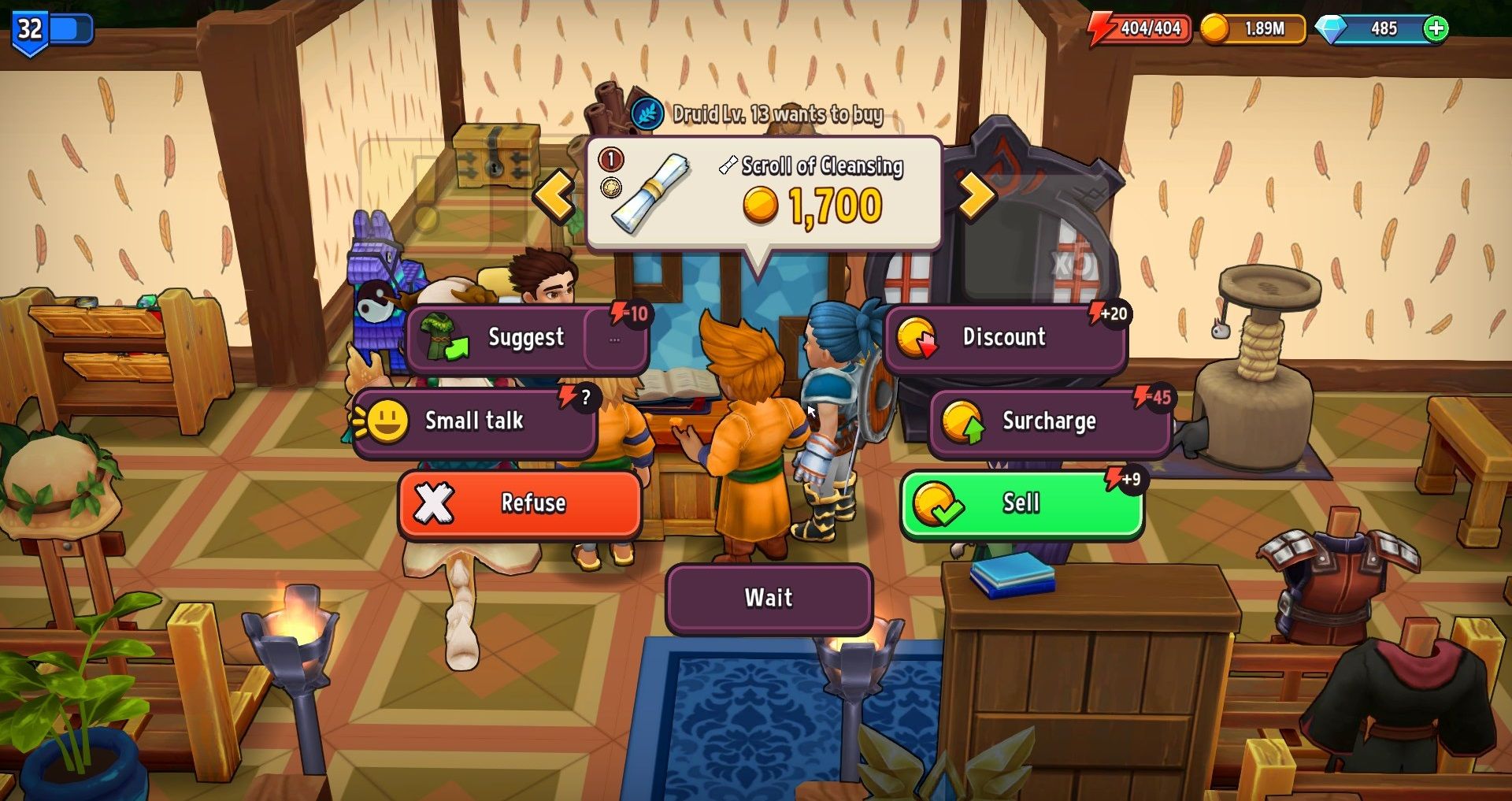 One of the cool features about this game is the smarter player can progress along a lot quicker than people not looking to min/max situations. This is all done in the bartering system with NPCs when they come to buy items you have in your shop.

This evolves heavily around how you choose to manage your in-game energy. In-game energy you can use to instant finish an item you are crafting, suggest the NPC buys a different item, or surcharge the price of an item usually doubling the price.

Using the small talk button can earn or cost you energy. On success, you get a percentage increase in energy. The further the energy bar is to being full the less you will earn and the more a failure will end up costing you. There comes a point where using it without spending much energy first is an unwise move to make.

You can also discount items and depending on a few factors how much energy you end up getting from doing so. I liked over the long run learning what items I wanted to produce to burn up cheap resources to discount the price of energy. So I could more quickly push out higher value items or double the price when I go barter with the NPC wanting to buy a certain item. 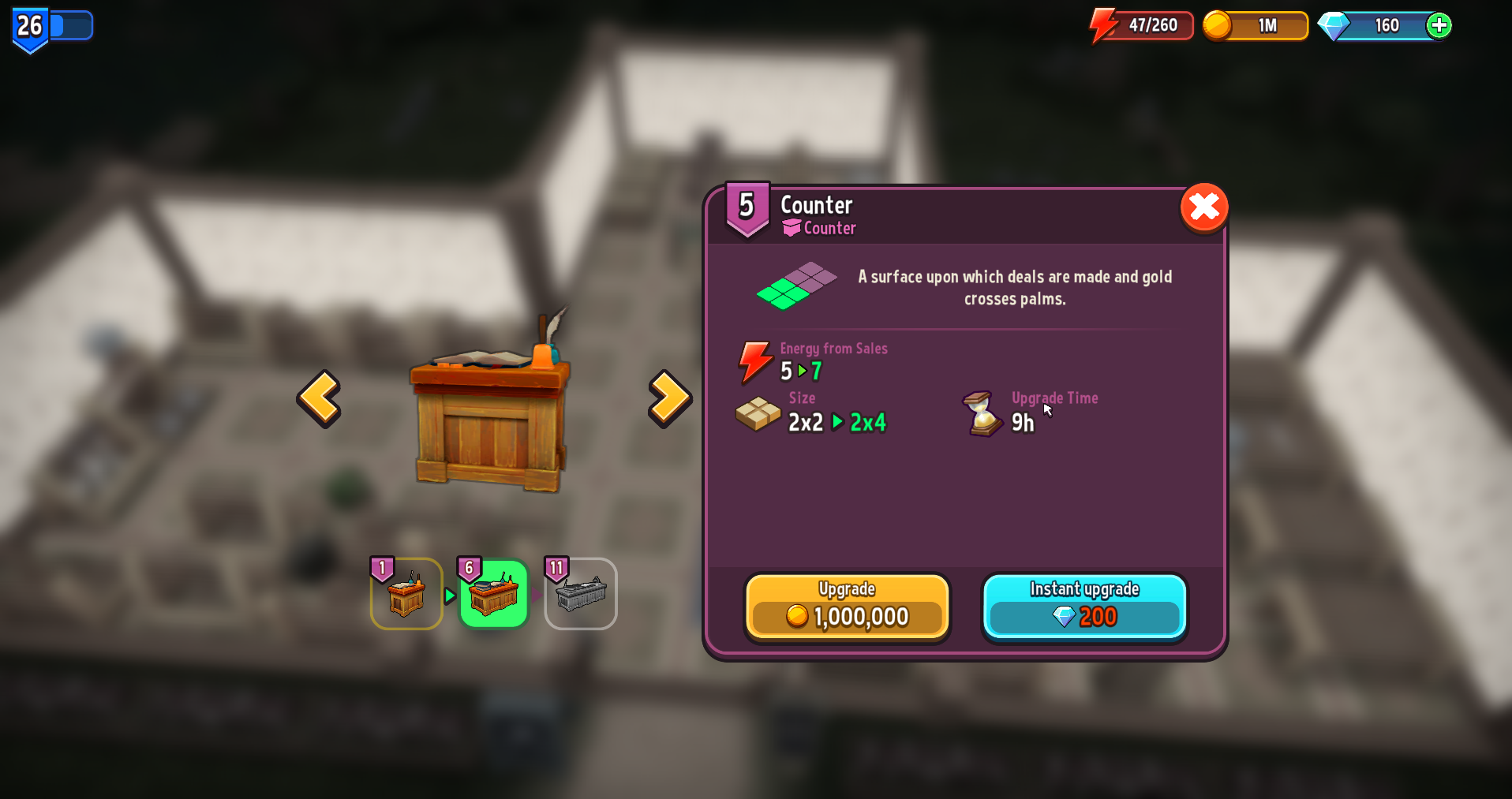 While it is safe to say I’m not a big fan of f2p games that both have a subscription model and are trying to push sales on you for faster game progression by allowing you to pay to speed up time gates and resolve item drop scarcity barriers. I ended up having over 70 hours of in-game time. As when I was engaging with this game I was in a constant struggle to keep my store shelves full, deal with customers, and other management aspects of this game.

Other than the free premium items I got for joining this game when I did. I ended up not spending any money to speed up my gameplay to the next stage. I quickly outgrew the guild I was in that even had a spender in it. The game kept me engaged for quite a few hours.

Screenshots were taken and content was written by @Enjar about Shop Titians. If you wish to further support my content you can use enjargames at checkout or this referral link for Shop Titans on the Epic Game Store.

Disclosure: Free premium offer received for logging into the game. No other requirements for the offer I received.

Disclosure: As a creator of the Epic Games’ Support-A-Creator Program, I may receive a commission from certain purchases.