Hunting giant scorpions or as they are called in Entropia Universe Rextelum is something of nightmare fuel for some. They can be a bit tricky since they have two different kinds of attacks. This also was not my first time hunting them as I did a bit in my past.

While the cover screenshot of this post is of their habitat where I hunted them. Going forward there are going to be a few up-and-close screenshots of the evil things. They were not very kind to me during my hunts either. Quite a few years back I had started a Rextelum hunting mission for them. You score points depending on the maturity you kill. Once you earn enough points you can turn in the mission and get the next mission in the chain along with some sweet skill rewards.

The great thing about these is there is also a Codex on Rextelum as well. So while you are going for rather large skill gains by hunting enough of them you are also getting other skills from the Codex as well.

In the past, I had finished off the 600 kill point and was almost done with the 3k kill point mission. The reward for finishing off this mission would be 8.10 PED of handgun skills. While that is not something I needed today it is always nice to have.

The higher tier rewards are even nicer depending if you want those skills or not. The final mission in the chain requires that you score 60k points and that is a long-term goal of mine. As just that mission alone could take 10k kills to finish You also get an option of a few different rewards. The option of getting 55 PED worth of evading is quite an attractive reward for the final mission. As evade skills is something I would love to have more of. 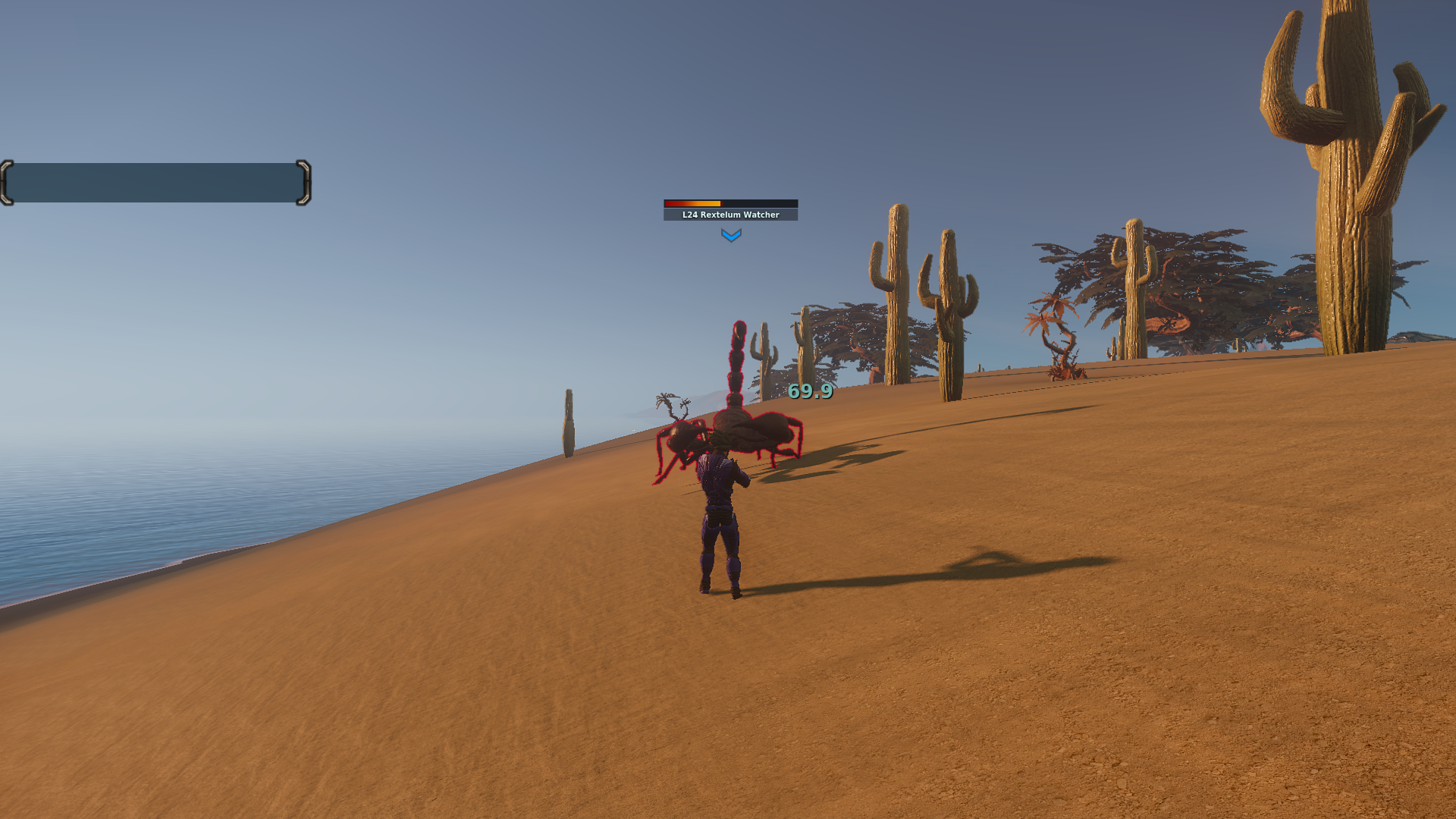 Rextelum itself has two different kinds of attacks. Their front claw attack deals cut and impact. Along with a tail attack that deals acid, stab, and penetration. The acid sting attack which is used less often from what I could tell can hurt and tends to be a struggling point for many.

Since I now have Gremlin armor with Mk. 5b plates I’m able to hunt these. While I would assume that is not the most ideal gear for it. I also know there are plating that I could be using that provide acid protection. I however did not feel like making such an investment since I did not have a huge struggle dealing with them and the armor decay seemed acceptable. The lower maturity of these ends up having less health and damage than say Hogglo which makes them a far better match for me to hunt. I can also kill between weak to strong maturity without too much of a struggle; although, I would perfer to stay away from the strong.

I have not tried anything harder than that as they tend to jump in health and damage by quite a lot the further along you go. Thankfully I was able to skip around anything harder and did not need to find out if I could kill it or not. After some exploring around I ended up finding a rather nice spot I enjoyed hunting them. They are on an island with a couple of different teleport locations and camps to base out of. These are not creatures that you tend to find in a lot of places so it’s great they have an entire island.

Outside of a couple of annoying low-level creatures on this island that I had to sometimes clear out of my way. It was quite an amazing place to hunt. It had a decent density of Rextelum to hunt while also giving me some space to walk backward as well. I’m glad I’m using an ArMatrix LR-35 (L) laser rifle with an ArMatrix L-Amplifier 33B (L) as a weapon for hunting these. As they do have a little bit of health regen so you don’t want to sit there on too low of a gun to take them out.

While the loot table for them lacks anything insane at least in terms of guns. They are quite a few possible high markup items that should be dropped on the occasion that could make it worthwhile.

Sadly in my first hunt, the loot was really bad. While a lot of people do hunt these and get some decent global. I got nothing of the sort. I ended up walking away down 24%. Which for something like this I would expect. They are higher health creatures than I’m used to fighting.

Since over the long run I really would love to hunt these infrequently to work on the missions I did what any reasonable person would do after having a bad session. I came back a few hours later to try again and walked away on that hunt being down 36% on just that hunt.

I can only guess since a lot of the (L) gear that can drop off them seems to have a higher drop chance than that kind of armor tends to be on a lot of other creatures. You more or less need one of them to drop or it’s going to be a bad run. Making this one of those things you are either getting global on or going down with the bathwater.

These kinds remind me of Atrox in a way. You could either have an amazing hunt on them or a bad time. I however have not hunted them enough recently to know for sure. I can only guess I gave up on the mission so many years ago from a streak of bad luck on loot. As I ended up being just one hunt away from finishing that mission. I was hoping between my two runs that I would at least get some kind of taste of the drop rate on some of the higher markup more common and uncommon drops. It seems that was just not on the table for me. While it’s tempting to go back another day I have other plans in mind for what I want to do.

This will just have to be something I hunt in a couple of weeks or even months later. I was not cycling enough ammo to give them a fair chance at showing me the potential they have. I however have no idea how many hunts it would take to see.

I was mostly there to finish off the mission for some hand guns skills. Along with seeing how hard they would be to hunt. Outside of the bad loot, they look like something that is a good fit for me to hunt.

Compared to the Hoggle hunt I had just done. I took half to two-thirds less healing decay and four times less armor decay. Once I get hunting them down a bit further those costs could be even lower as I learn how to deal with them even better and my skills increase.