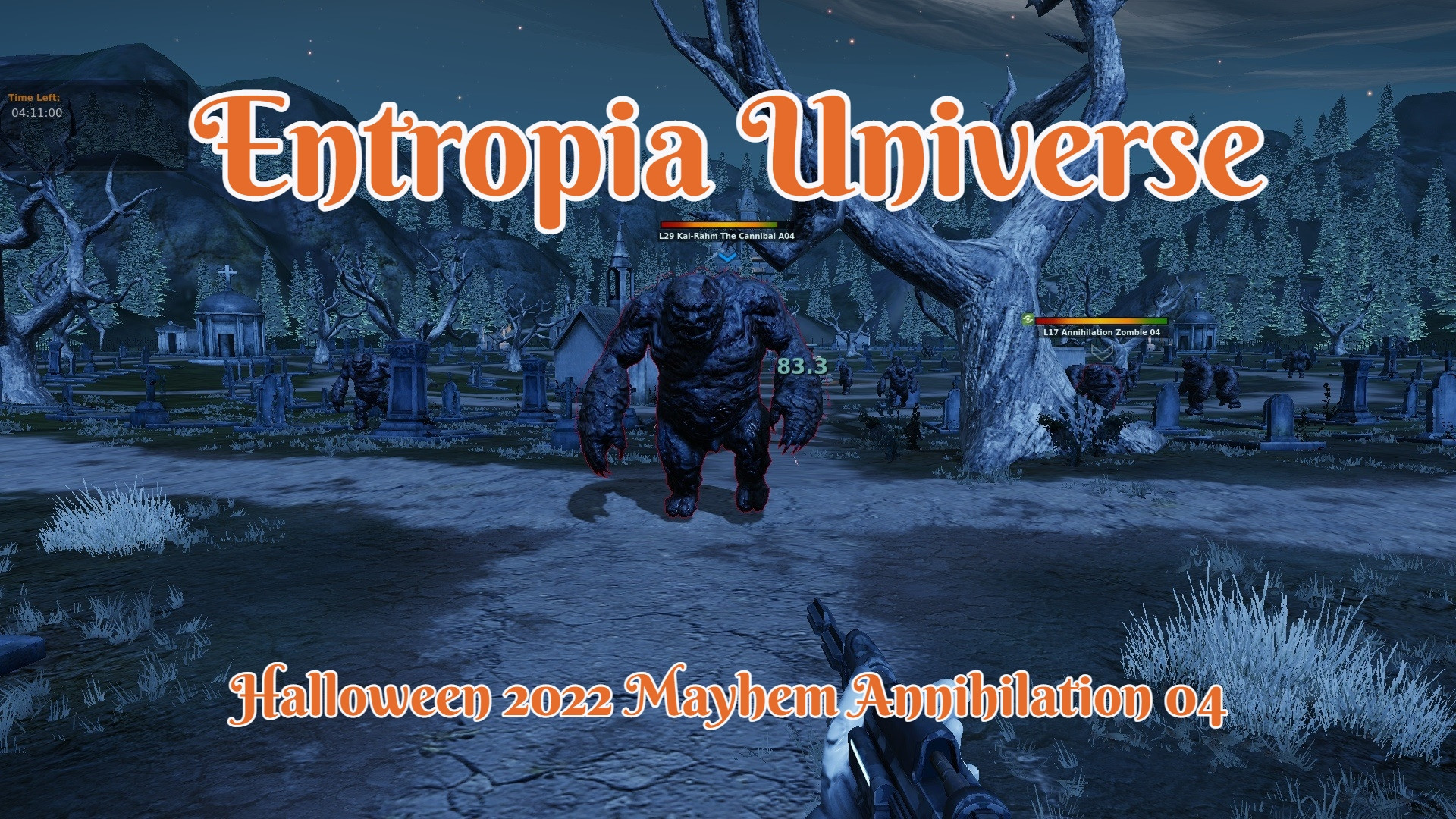 It was time to step it up a notch and try out a higher-level weapon. I felt Mayhem Annihilation 04 during the Halloween event would be the perfect place to do so. I have yet to try this instance out so I was not exactly sure what I was going to encounter.

Before doing so I needed to run around checking out some shops to try and find some ArMatrix LR-40 guns and amps to go along with it. Up till this point, I was not paying much attention to the prices of these guns. Thankfully one of the shops I have written down had what I was looking for at quite a decent rate.

Even better they had more the one. I even picked up an amp for the gun as well at a decent price. This would be almost the last time I would be buying any further amps during this event. The prices people are asking are just getting out of hand.

I’m also willing to admit math wise I’m not sure at what price point buying an amp is no longer a great decision. Thankfully I still have some left and I get to enjoy my new gun with one that is right for its damage output. After that, I will be using an Unlimited amp I have that can be repaired but has quite a smaller damage output and it’s not as efficient.

For a little bit of a warm-up, I did go into the Mayhem Annihilation 02 to test a few shots with an ArMatrix LR-40 (L) and a 37B amp. Nothing outstanding happened during that warmup.

While I was almost on par with getting the boss to spawn at the 30-minute window. There were a few situations where I was overkilling at a higher rate than I would have wanted. This gun can put out some decent damage and critical hits.

I feel moving forward I’ll more than likely stick to just using the LR-35 for Annihilation 02. I could get away with using a bit of a smaller gun or even an amp if prices for those guns become just too costly compared to other options.

If I was s a pistol user instead of preferring to use the rifle having a higher level one in this instance I think would rock. While many people prefer pistols in this game I just love the long range of a rifle and I’d rather not be leveling up those two even though some of their skill gains would overlap. At least for now although there are benefits to doing so. After that, it was onto running an Annihilation 04 for quite some time. I wanted to see how the ghost armor I had recently acquired stacked up to the damage the zombies would be dealing. Along with how quickly I could kill them with my higher-damage output gun.

While yes, there are some sites I could have gone to see how much damage I could be taking on average from the gear I was planning to use. Along with seeing how much health these level 17 zombies have. I felt it was just more fun to dive in and see how it went. I’ll leave overthinking the situation for another time.

One of the bigger drawbacks to moving up to a higher level instance would be fewer kills per hour by a decent amount at that. While there is going to be a chance I could score bigger point values. From my own experience there going to be a balance between the kill rate and the kind of points you end up getting. 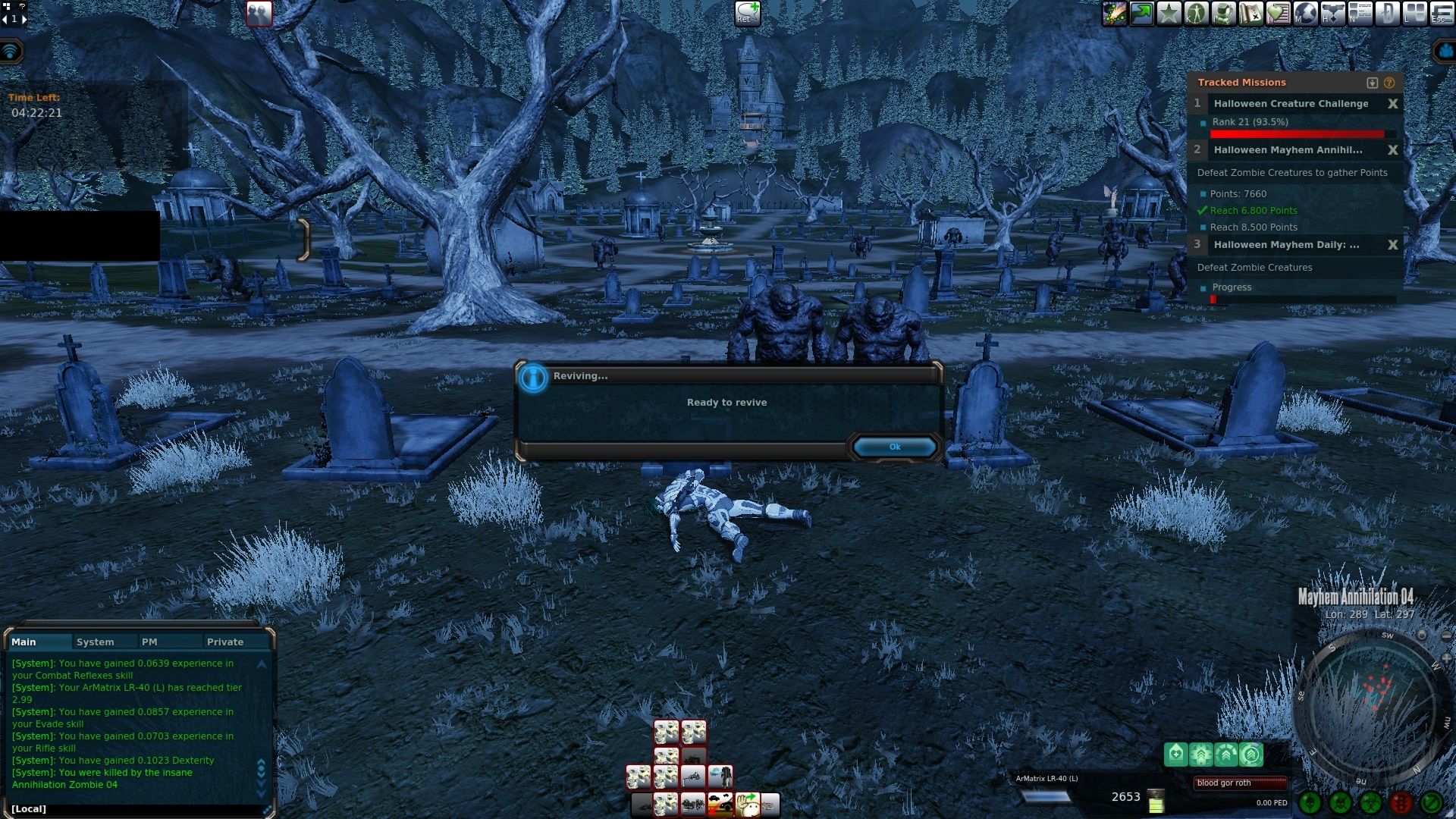 These things were also a bit harder to deal with in general. While moving around the instance a bit to keep me sane managed to get an add spawning on me while I was trying to kill one of the zombies. At the time I was not paying enough attention to my health and died.

Thankfully this instance is not that larger and I was killing on the outer rim so I was able to get back safely and quickly to finish off my kill. Naturally, I got my revenge on the add as well. He was trying to run away and get lost in the crowd but I managed to take him in time. Another big this was how long it took me to get the boss to spawn. Around 49 minutes in total; instead of, closer to 30 like I would want. Since boss killing has not gone that great for me so far it was not that big of a deal.

Bosses do tend to have a higher chance from what I can tell from giving a decent point reward. While the loot was more of the same: a mayhem token, strongbox, and not enough PED worth of shrapnel. I did get 100 points. 100 points are however quite the normal amount I sometimes get in the lower-level instances of bosses anyways.

I did throughout this run manage to get a couple of hundred points to count toward my silver Halloween Mayhem Annihilation mission. I however wonder how many I could have gotten during this same period in a lower instance.

While it is true in the lower instances I’ve had some prolonged periods of not even getting 100 points in total. If I would have had the same dry spell here it would have currently been fewer points overall since I was killing quite a few fewer per hour.

One thing I have also noticed a lot is just how “constant” the TT returns have been loot-wise unless you are just having a bad day. I still have only gotten mostly shrapnel drops, some mayhem tokens, and strongboxes. I was kind of hoping by now to have gotten at least one (L) gun or armor drop. I guess I’ll have to keep dreaming about that happening. 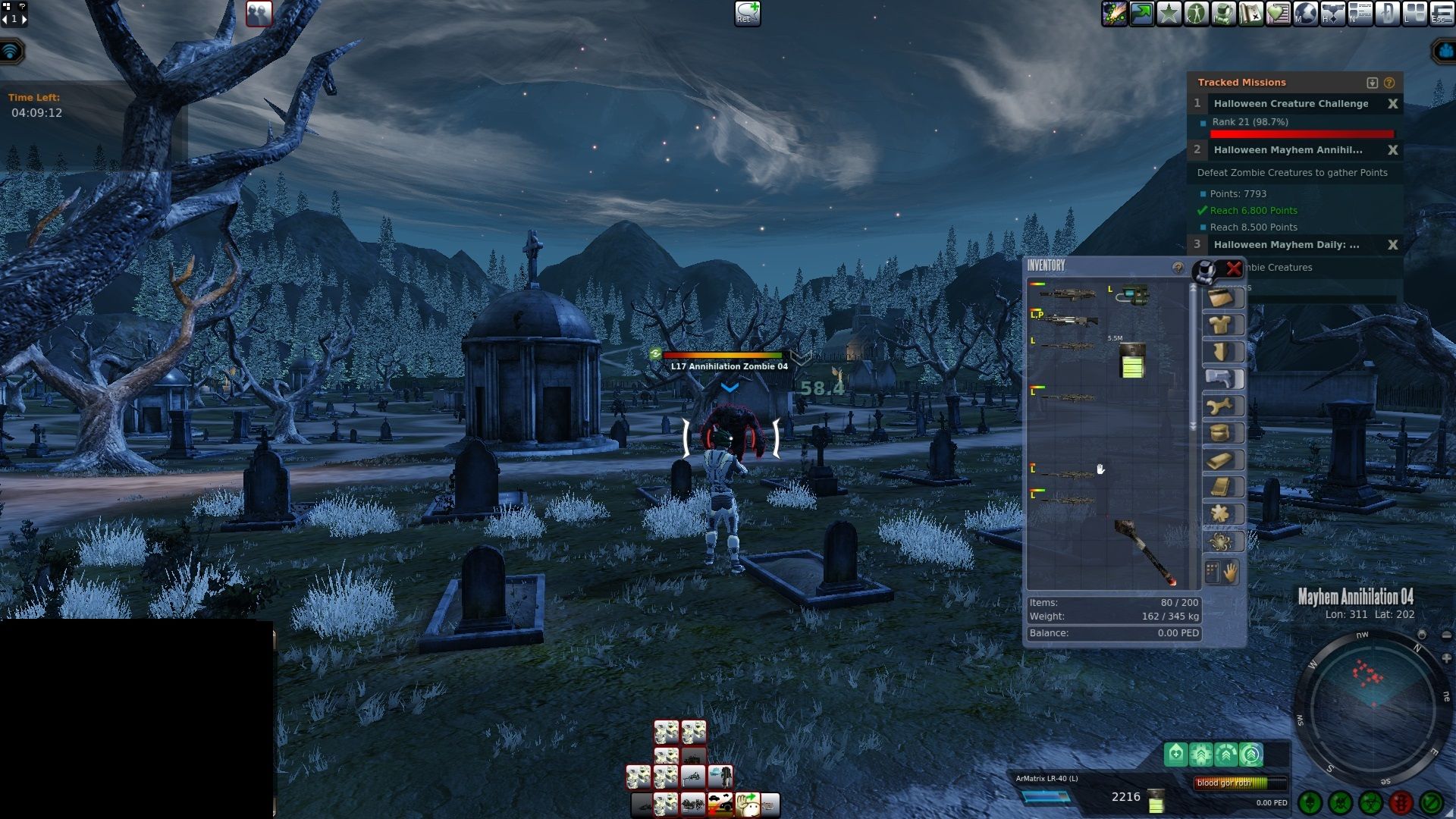 At one point I ended up taking this random screenshot for no real reason. It happened to be the last one I did take during my test run in Annihilation 04. You can somewhat see I have quite a growing collection of different guns on me at this point. Some of them are also near broken as well.

This was not one of those instances I decided to stay the full five hours in. I liked having a higher kill rate per hour and I was doing a little more healing than I felt up to doing. A lot of these runs I would be doing up till 5 or even 7 AM my time. As such, I was quite tired and extra healing was doing way too much work on my end by then.