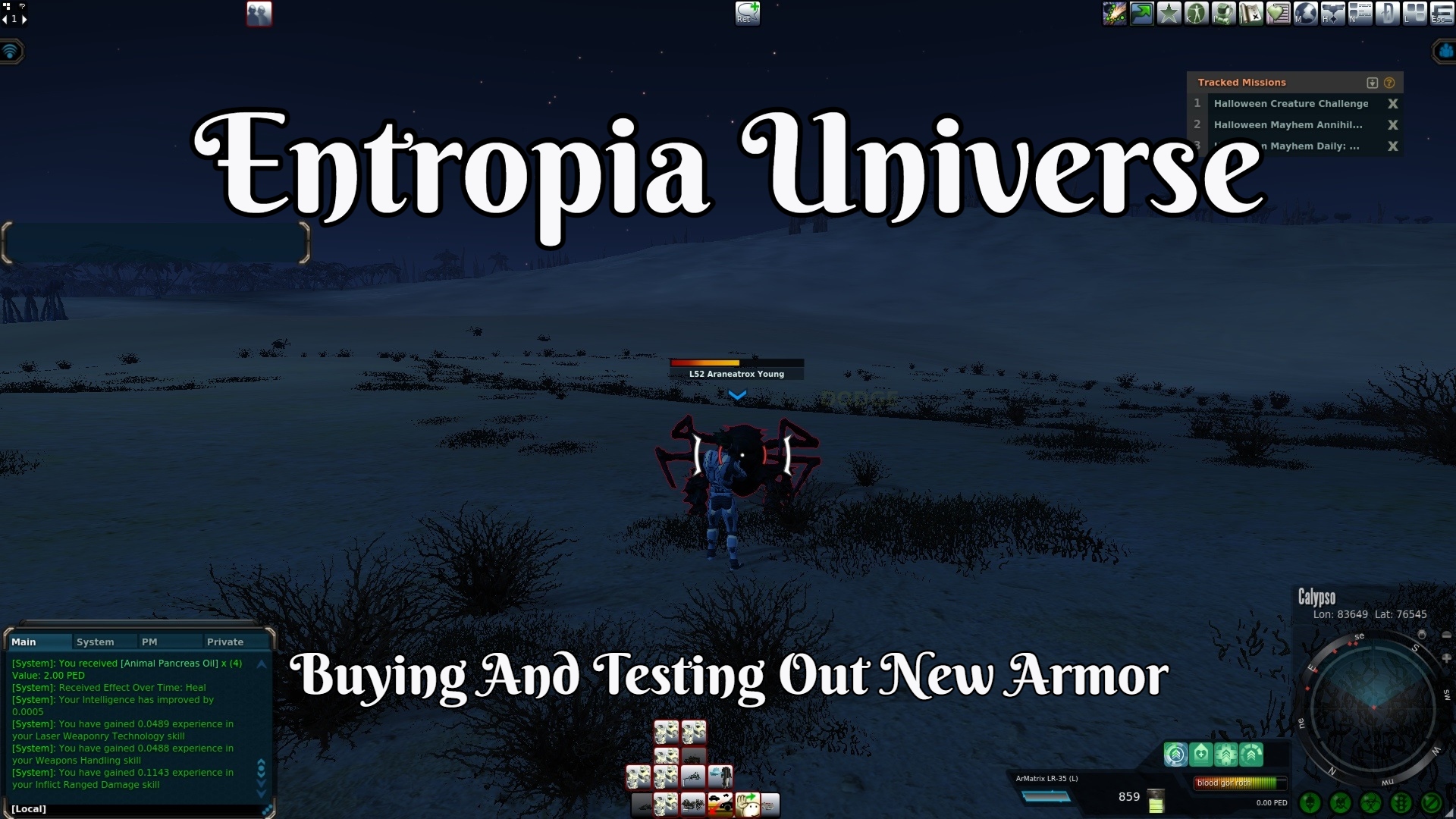 Before the start of the Halloween 2022 Mayhem event, I decided to not buy myself a set of Ghost armor. My budget was already going to be stretched for the event and I could get by with what I had.

I was also not expecting to buy any either. Ghost armor itself is crafted so in theory if the crafters have enough materials they should be able to keep up with demand. Despite some of those ingredients skyrocketing in price, there seemed to be some decent deals to be had.

At this time I also had a few large stacks of ore sales that I had listed on auction. So it was now within my budget to do some shopping around and get myself Ghost armor if the price was right. I’ll soon be able to use a bigger gun and I’ve needed a slight armor upgrade for a while now anyways.

While a few of these prices seen in the auction house are a bit over what I could have paid for before the event started. I was aware of a shop that had four or so pieces listed at even cheaper prices than before the event.

I was even further shocked they were still there on the shelf waiting to be bought. That would leave me possibly paying a little extra for the remaining pieces. Expect I did not do that either!

I ran back to the auction house to get the final pieces I needed. Just moments after I had checked the first time around someone put up an entire set of Ghost armor and a fair bit cheaper than anything else listed.

If only it took me 1 minute longer to get the auction in the first place I could save myself a few extra bucks. I ended up picking up the set for 8% cheaper than I was expecting so that is still a win for my book.

Once I got the new set of gear and set up a binding so I could equip it all at once I was almost ready to go. I just had to remove all the plating out of my old armor that I’ll still be using from time to time and put it into the Ghost armor instead. It was then time to test out the new armor. I thought no better way to first start with the Mayhem event since that is what I’ll be using it for in the short term.

As suspected I did not need it. It was however nice to have. Since ghost armor has protection to electric and some higher protections against other forms of damage the zombies do I would take less damage. The result would also mean I was healing a bit less.

This was still at the lower end of creatures for the event. This armor should be even more amazing if I decided to step it up and hunt some bigger things. Once I can use a bigger gun which should be soon I might be trying that or go back to the survival instance and see if I can progress further along.

Since the armor was absorbing more of the damage the repair bill ended up being higher at the end of my test. My healing decay bill was however lower since I was not healing as often. In the end, it is a slightly more efficient of a setup than I had before. The cost saving in the short to medium term would not justify the cost of buying the set itself just for this. 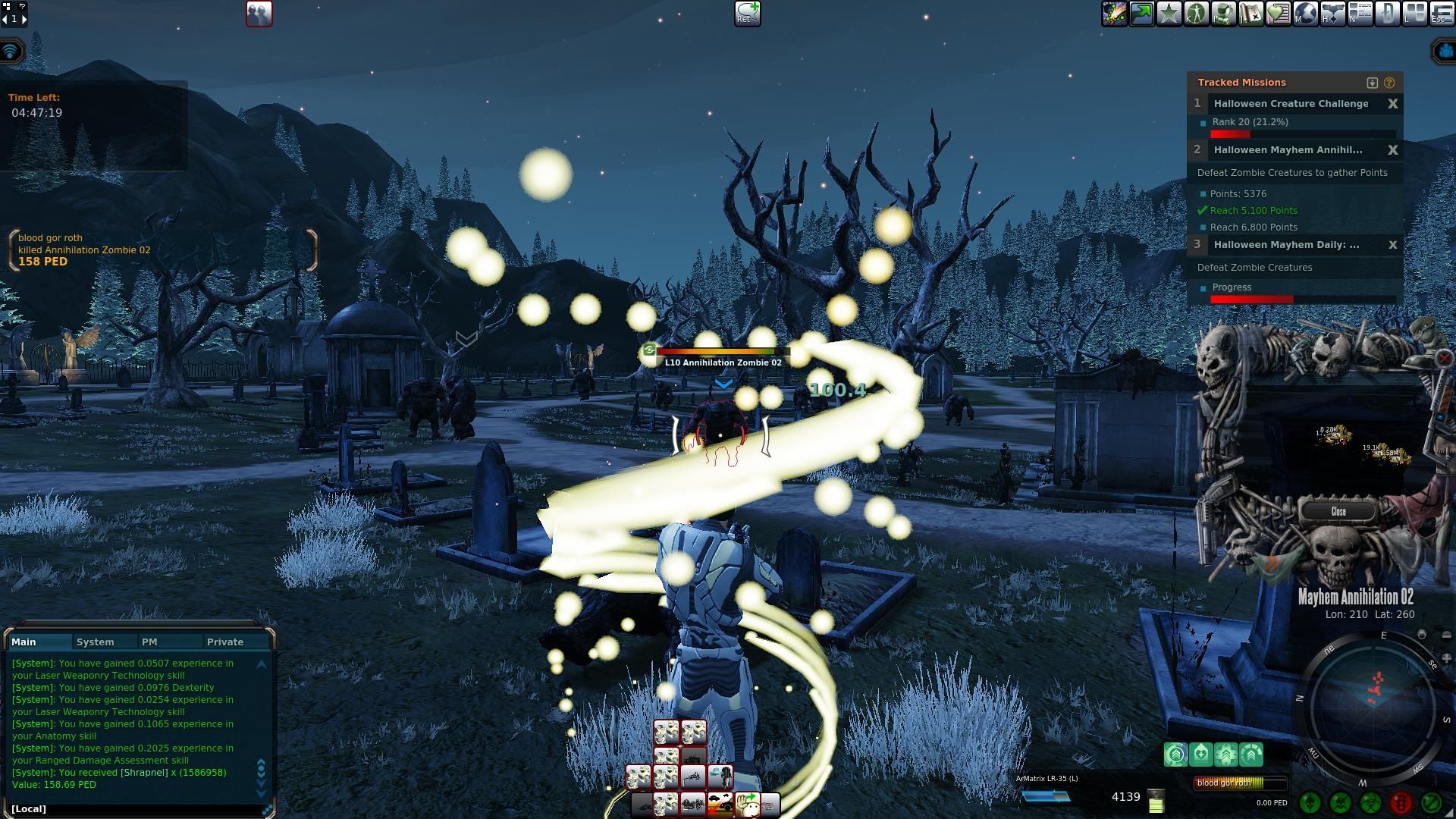 The shorter run I did however was profitable. Between getting two global of which one was 158 PED and some others that were close to being one. It already feels like I made the right decision. Like the armor was trying to pay for itself!

I knew this test was not going to be that challenging for the armor. I also wanted it for hunting some other creatures so I ended up doing some normal runs on those as well. I needed a break from hunting annihilation zombies anyways. My first creature of choice was Araneatrox. These ugly-looking spider things. While I have been able to kill them in the past it would usually require a lot of combat healing. They have very high health regeneration so stopping to heal yourself is not ideal.

The good news is the amount of in-combat healing I needed to do was reduced by a considerable amount. I would sometimes kill one without even needing to heal during the fight and only after. While other times just a little bit.

I also died a lot less. I ended up trying to take on a higher maturity one than young and that was still too much for me to handle without a lot of healing. This was also not an unexpected result and I plan on only hunting the young anyways.

The run itself went dreadful in terms of returns. These are level 52 high-health regeneration creatures. While it was tempting to wait till I could use a bigger gun which I was getting close to skill-wise. This test gave me quite the insight that I needed. I then ran off to test out the armor on Hogglo! Of course, I love hunting these so naturally, I would. The biggest struggle I’ve always had in the past was a large amount of healing I always had to do.

I was shocked between my skill gains since the last time I fought these and my new armor how much easier they were to kill. Making me kind of wish I had this armor before I did all the hunting I have done in the past on them. That would have saved me a decent chunk of money in healing and decay. It was nice to finally pick up this set. Quite a while ago I could have gone with getting Ghost instead of Gremlin. I however wanted to try farming for Gremlin myself and the fact Gremlin had acid protection is why I got it instead. Now I have both sets.

Hunting some other stuff gave me a much needed short break from the Halloween event. I would be back into it fully after this.