Out of all the Rocktropia lockpick 1 instances I’ve run, Crib Raid in Entropia Universe is my favorite one so far. It is a bit longer than the rest taking me between half an hour to an hour depending on how fast I’m clearing the instance. It’s also a little more diverse in terrain and setup I use.

Like the other lockpick instances, you will need a Lockpick that you can usually get for TT+2 on the auction house. I’ve gone over that enough in the other posts about these.

For Crib raid, I ended up bringing two different weapons and sets of armor. That is because you are dealing with everything from level 1 to 2 soul shakers to level 4 Decomposing Zombie Teens. Some of these creatures swarm a little more than others requiring a fair bit of healing if I did not switch gear.

For this run, I’m mostly using Assault Adjusted armor for everything but the zombies. For the zombies, I switch over to using Adjusted Pixie armor since you will get quite a few of them on you at once.

While I do a fair bit of clearing with just a Z12 Barbarella with an amp. The amp that the gun comes with will end up breaking before you finish this instance. You will be going through about 51 to ~53 PED in ammo. As such on level two creatures and up I’ll use a bigger gun and then finish them off with the Barbarella.

With this being a raid-style instance this is another one you start by placing explosives and will blow open the door to start. The creatures in this instance tend to have a bit more of a targeting issue than say the Booty Raid instance so you need to pay attention to what can be attacked and what is unreachable till it can damage you. 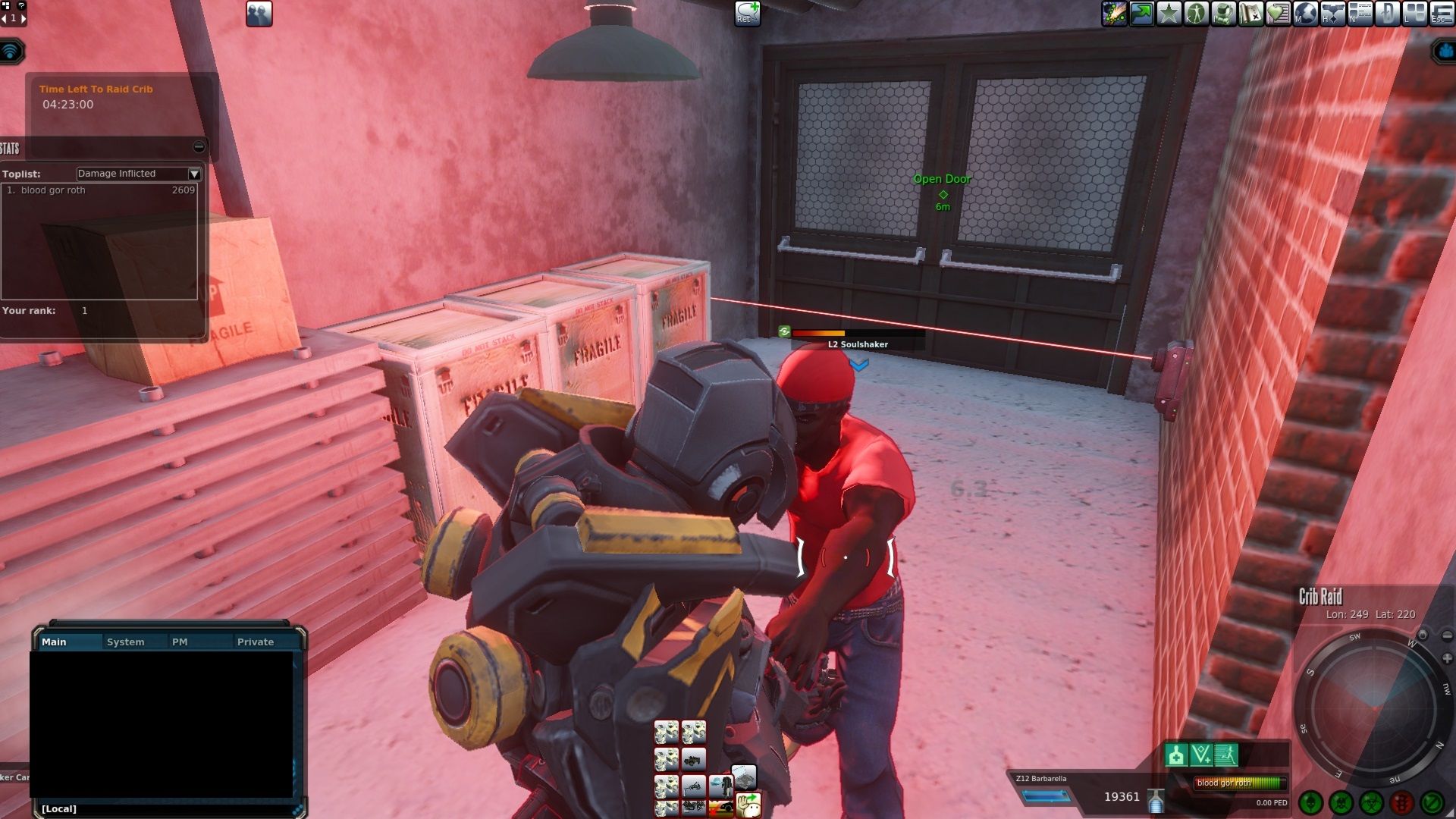 This instance has quite a few more laser emitter traps than others. Just like before you can shoot at them to destroy them, jump over them, or just ignore them and take the damage. I mostly try and jump over them when I can. Sometimes I miss and take a little bit of damage. That is no big deal. 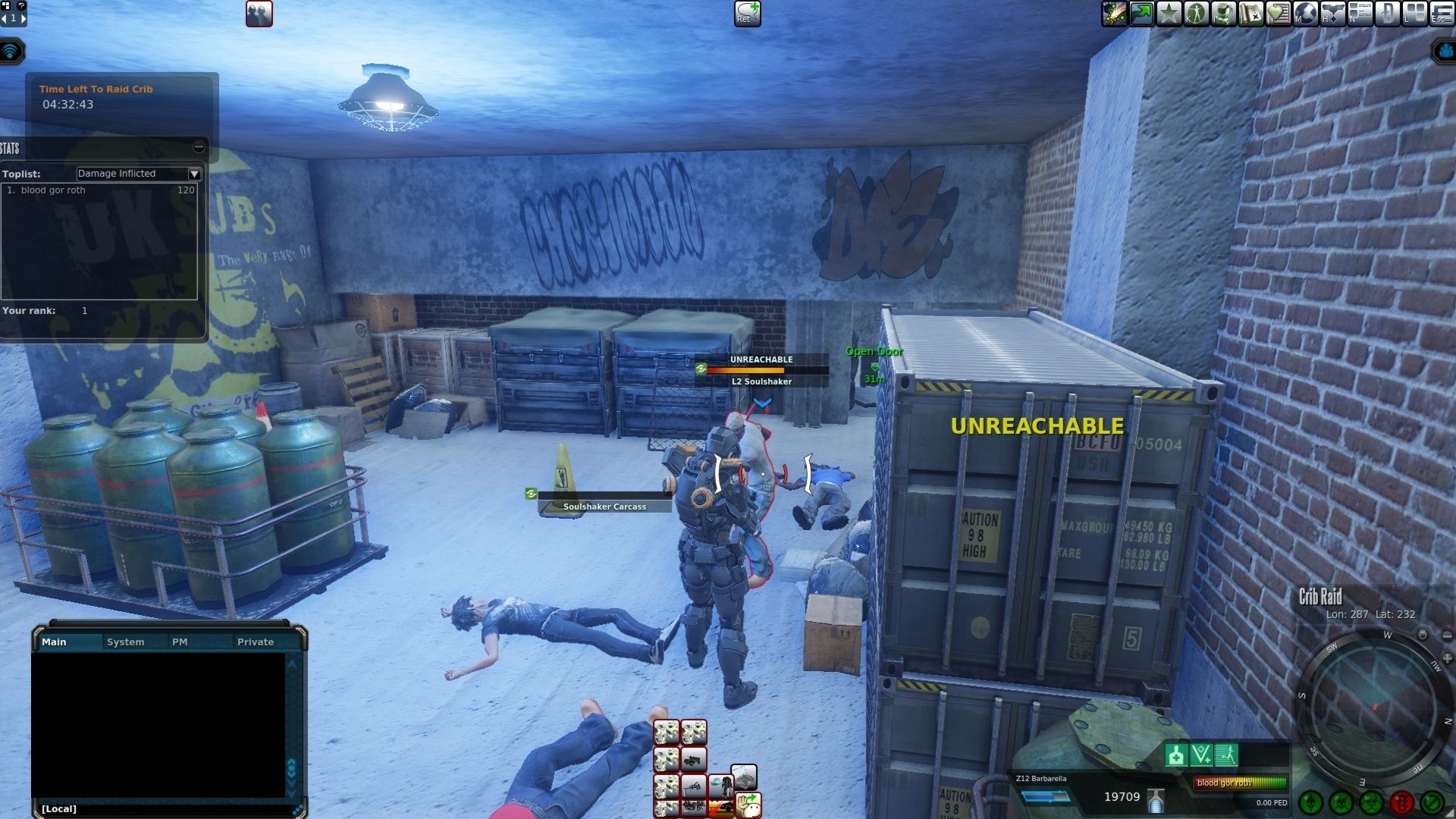 Once that door blows open there will be quite a few soulshakers rolling in to shank and shoot at you. Crib Raids has quite a decent density of creatures. This also creates the issue you see in the screenshot of me having to wait before I can shoot at the soulshaker again.

I won’t go over every single hallway or larger area in this post. As I ended up taking around eighty-eight screenshots in a single run of this instance. This place is nice and long if you want to kill 30 minutes or longer of time depending on how fast you clear. 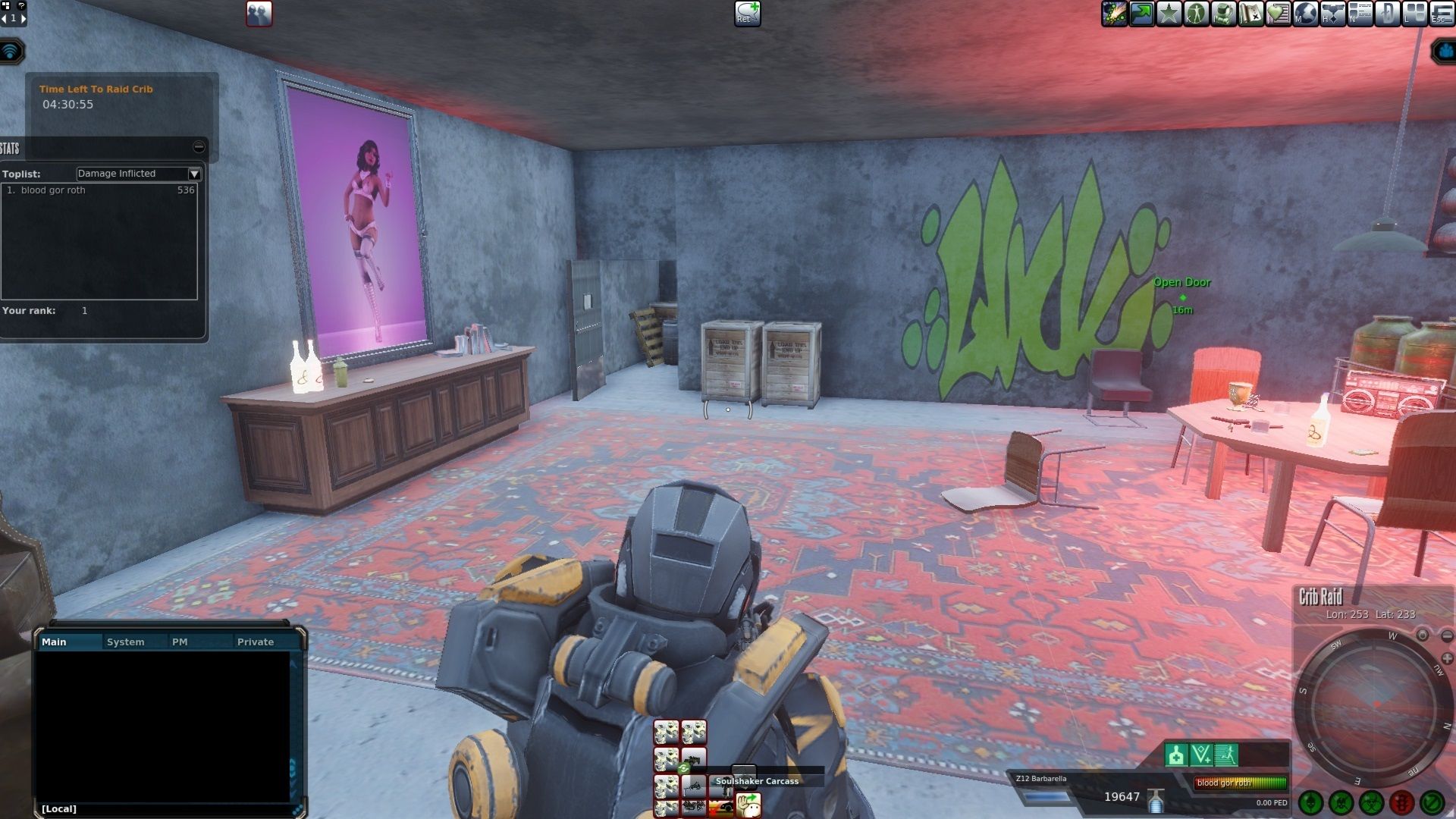 A lot of these rooms are set up like a gang of hoodlums who live here which they are. With spray paint on the walls, questionable artwork, and enough guns and booze to have a party. 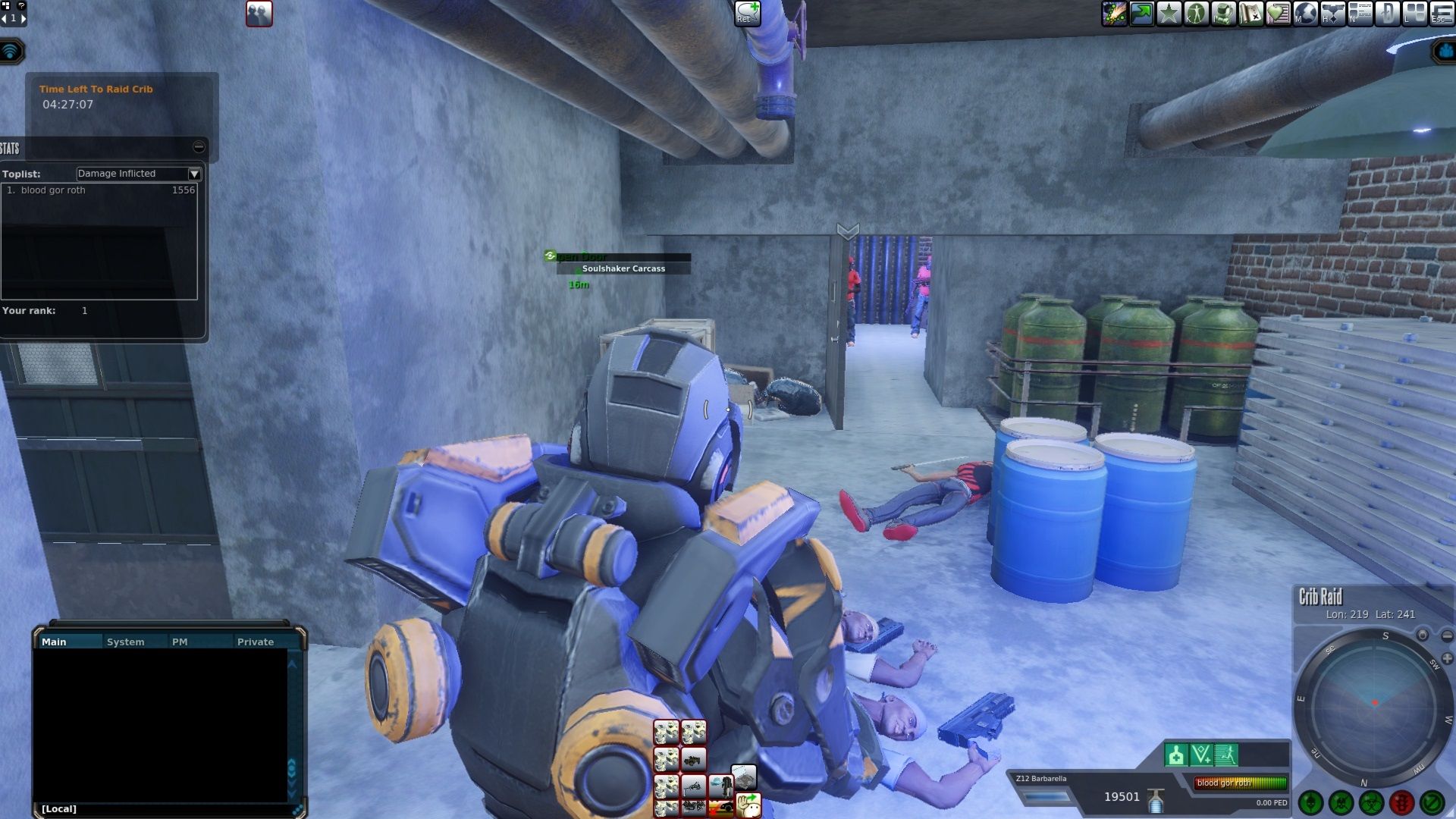 A lot of the time a large amount of them when a door is opened will cause them to come out. Many times however you will have to enter a room to be able to target and shoot them. This is a place for more short ranged combat. 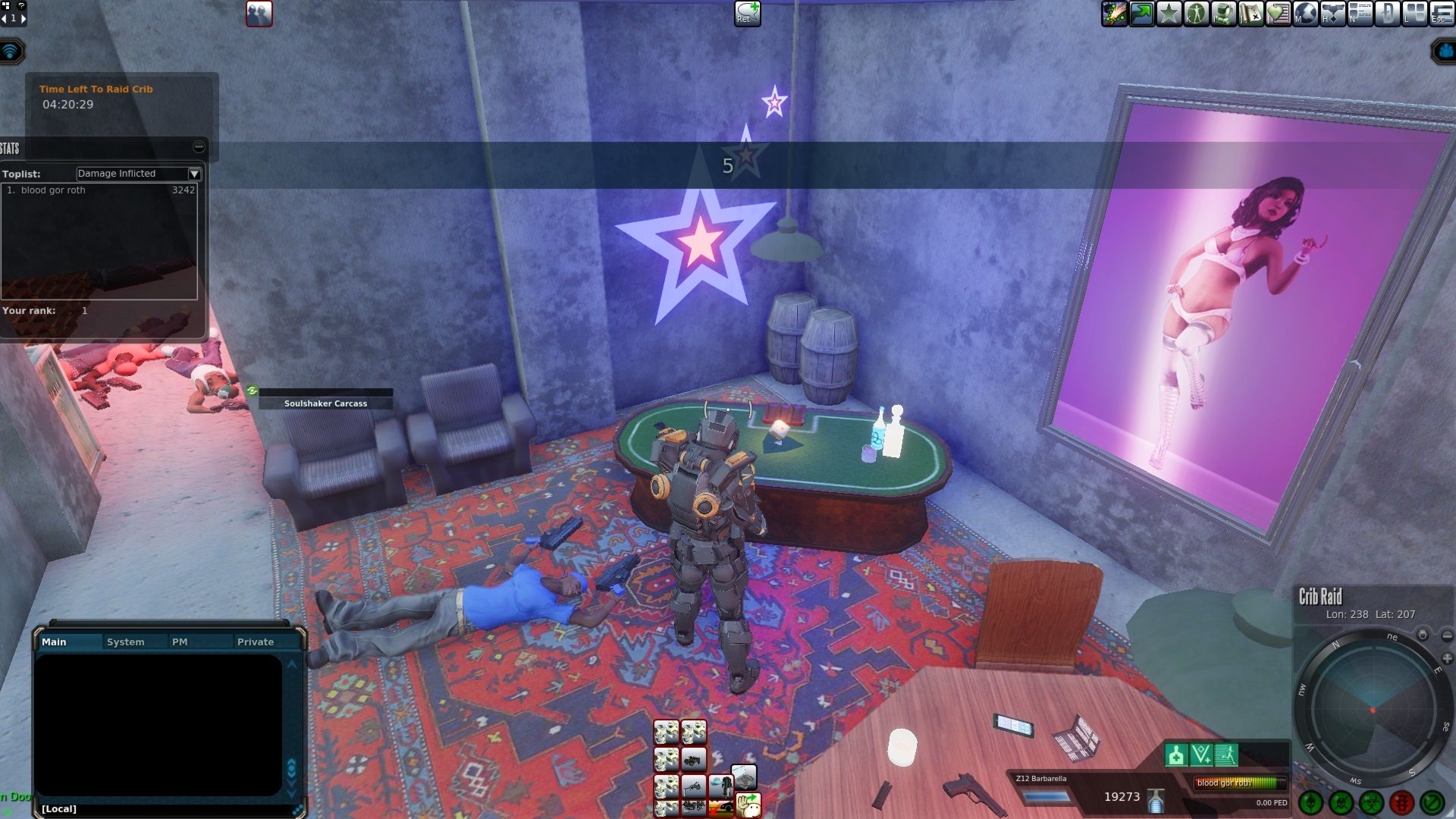 One of the rooms you are looking for has dice on the table. When you roll snake eyes you end up getting some extra shoulshakers to spawn in to kill. 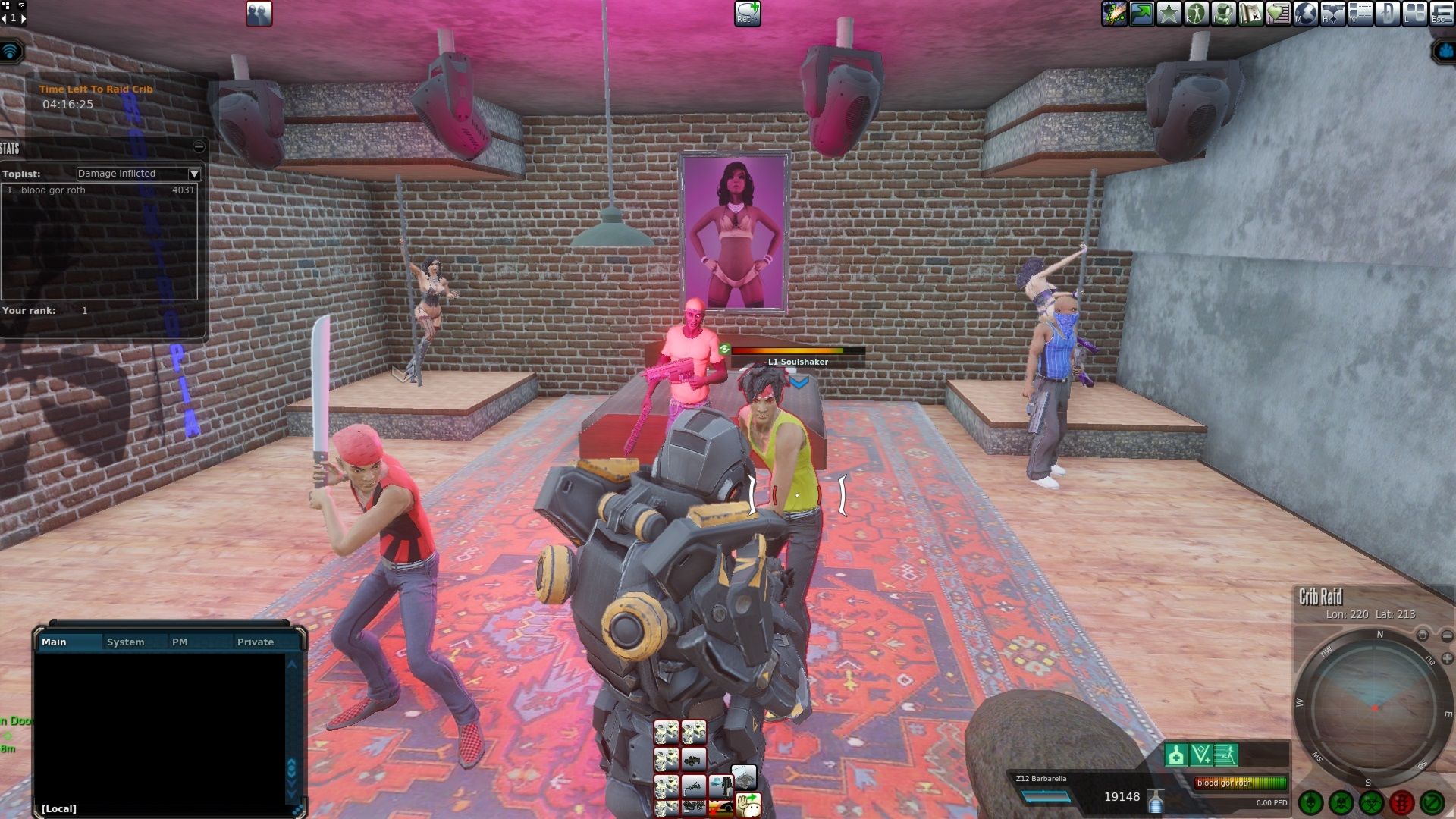 When you get into this room in the Crib Raid instance you will notice some Vixen dancing that you cannot attack. There is a connected side room that has a laptop with a waypoint for download data. Clicking on that will trigger the vixen and some of them are a little harder than most creatures in this instance.

After that, there are no other major rooms you need to be on the lookout for. At least ones that will cause extra spawns. There is also only one path forward so not that hard to find your way. 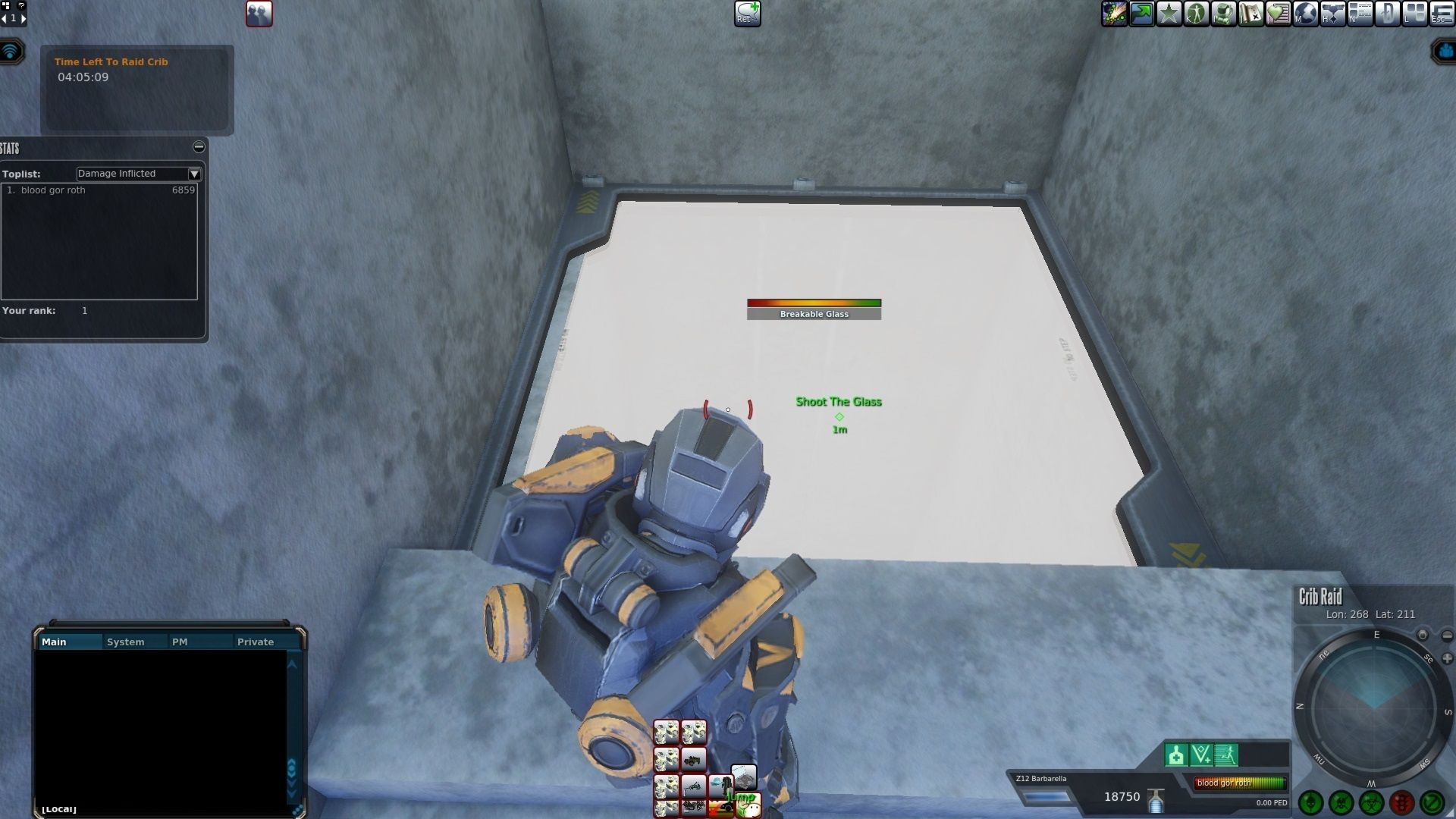 Eventually, you will end up at this piece of breakable glass that you can shoot by pointing at it and tapping your gun. Now would also be good to switch over to slightly better armor. Down below will be a bunch of zombies to fight on the sewer floor.

Once down below in the sewers if you are having issues seeing you can try adjusting your gamma and brightness in the options menu for graphics. Since this is just a portion of the run I don’t bother changing my settings and just deal with the blown-out lighting. You will notice there is a fence in this screenshot and behind that fence are some zombies. If you want to kill them you can just jump over the fence to get into that area. You can also jump back out when it's time to head deeper into the sewers section of the Crib Raid instance. 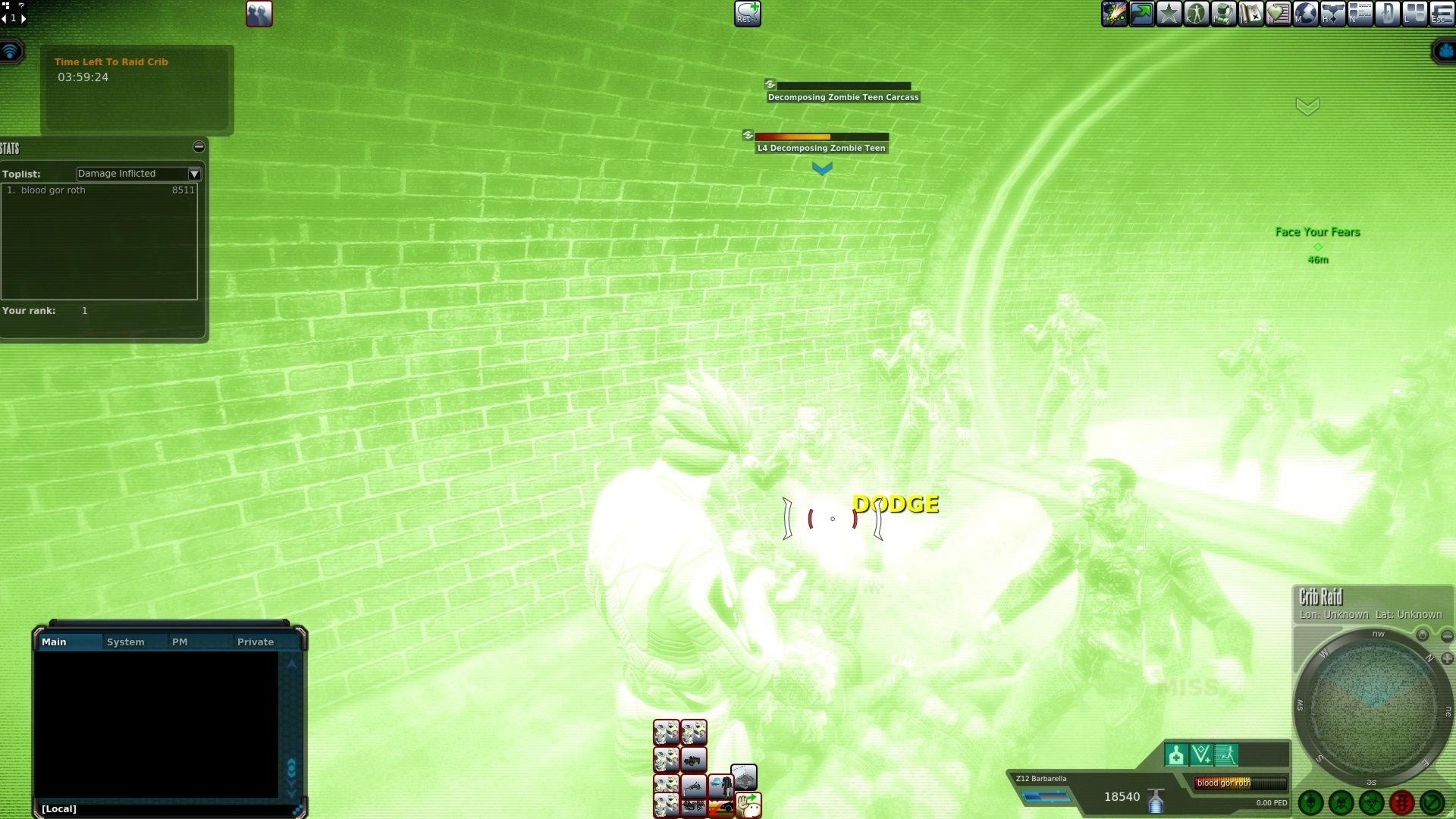 There will be areas down in the sewers where a lot of zombies will spawn. Make sure you are prepared and wearing the proper gear. I even found myself having to heal a little bit. While the rest of the instance that is not something you have to think about. Once you make it to the stairs you won’t be dealing with zombies anymore. If you want to save on decay you can switch out to lower or no armor. In this run, I forgot and ended up with a bit higher decay bill than I was expecting. 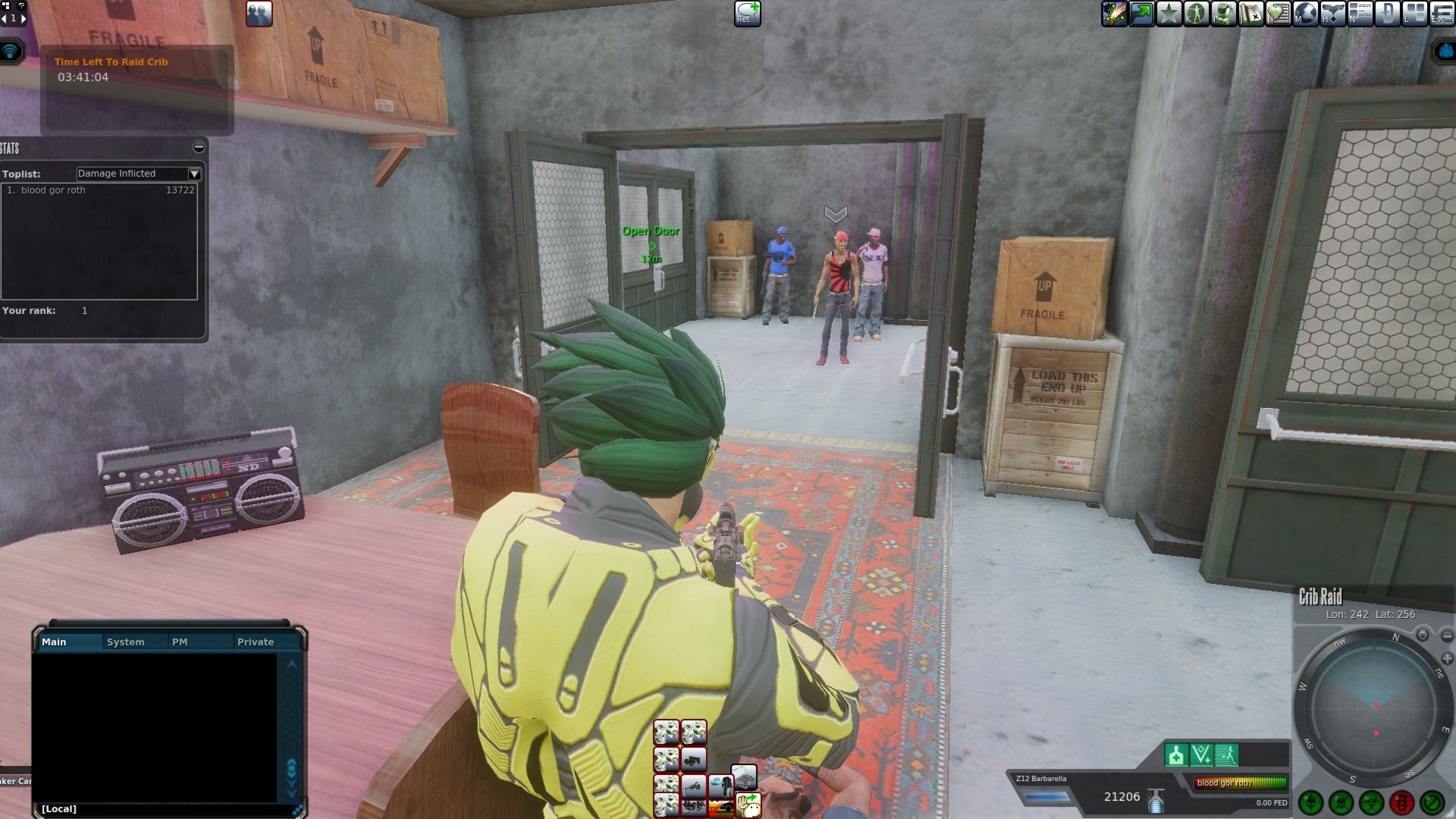 You still have a few more rooms and hallways of soulshaker left to clear before you reach the end. 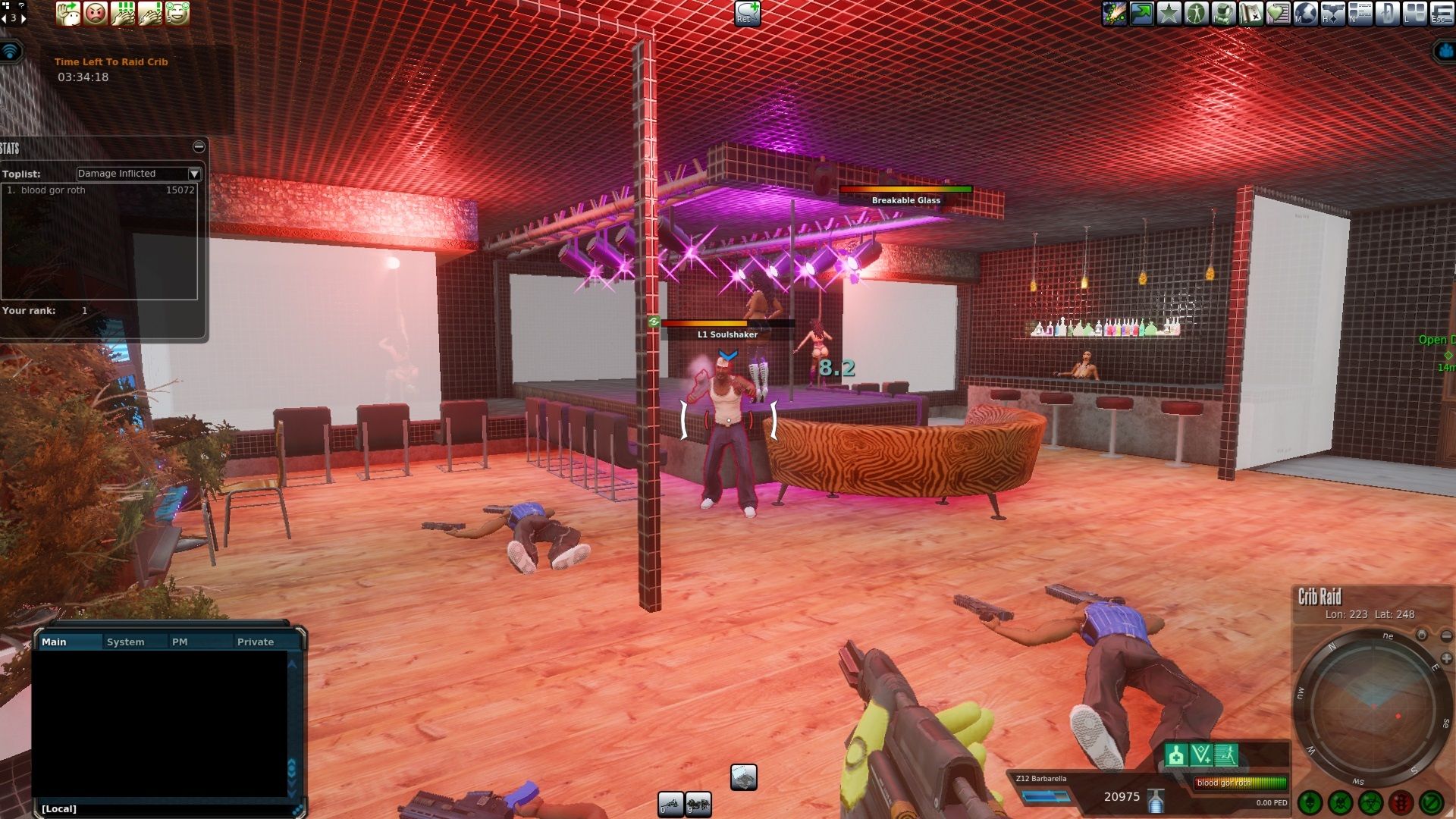 Once you reach this room you are just one room away from being done. You should be ready to run and shoot the glass and open the safe. That is it. This ended up being a decent run for me. I looted a B.A.M.F ZA2 (L) and while I won’t be saying it in this post if you look at that screenshot of the loot. Perhaps you noticed the other thing I looted that makes this one of my favorite instances to run on Rocktropia. For this particular run, I did end up taking an hour. For this one, I wanted to reduce the amount of overkilling I was doing as it is so tempting to use a slightly bigger gun and blaze your way through this place. When I’m not trying to watch myself so much I cut it down to about 30 minutes.

I ended up using 51 PED in ammo which was the lowest of my other runs. I however had 2.14 decay in armor which was up to half to four times what I did in my other runs. Oddly enough once I factor in the .49 decay in healing and compare it to my other runs I was trading extra ammo spent for lower armor and healing decay to the point it about breaks even.

In this instance, I’ve also looted a lot more interesting items. Unless you are someone who wants to farm a bunch of Vixen parts. I feel this one overall is just more fun and possibly rewarding. As you do have that entry fee on that key and the markup you need to overcome the cost of the run.