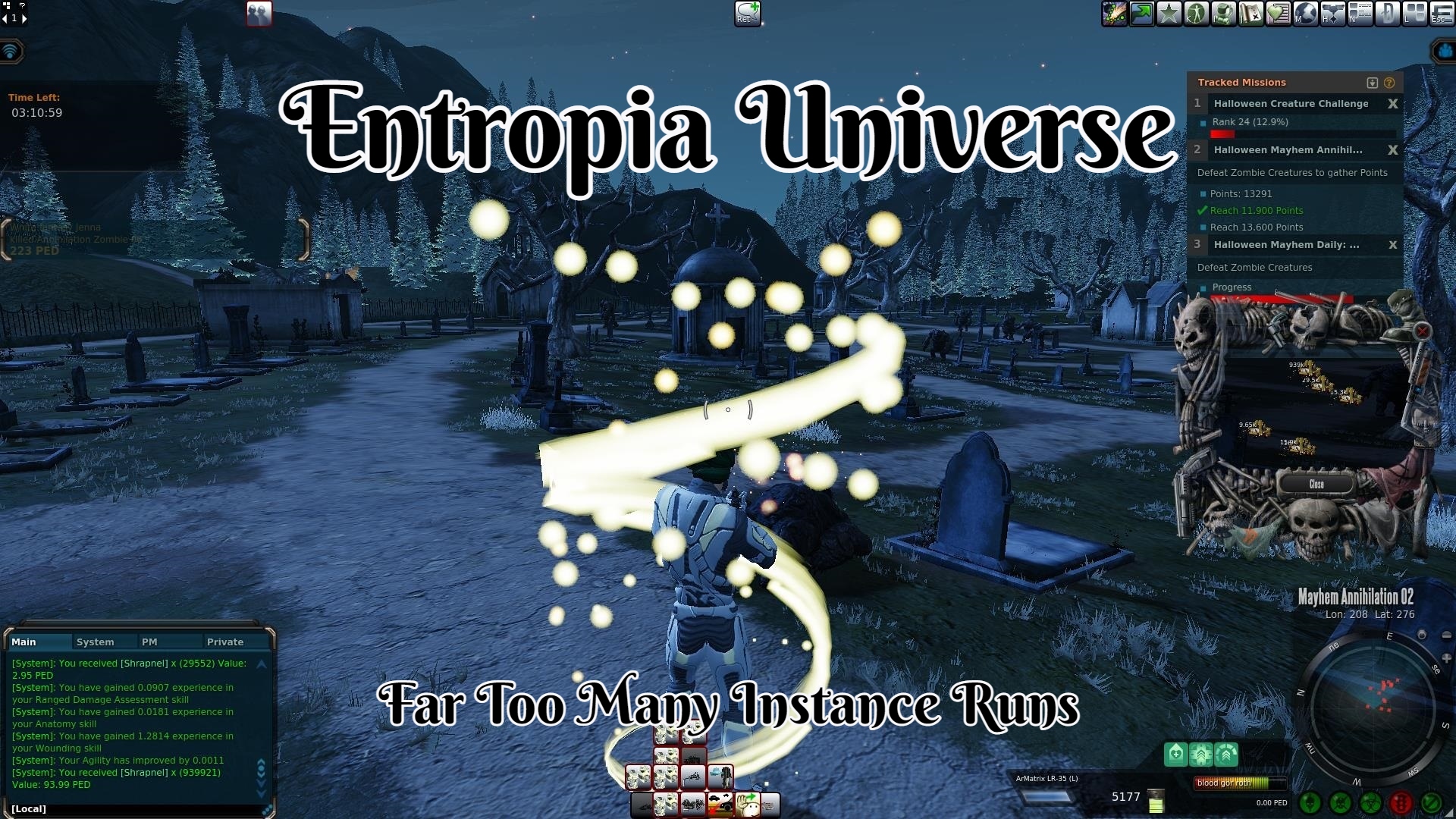 Quite a few runs and several days merge in my memories of what had transpired. I know there comes a point when this would happen. Rather not a lot happing and me being unsure how to further tell the story of running this event. For a while, I had a lot of almost global loot but just short. I went on some below-average looting streaks that I just could not shake myself out of. I still had what felt like forever and a day's worth of grinding to go to get all the points I wanted.

I was also starting to finish a lot of goals I had during this event. One of the reasons that kept me going for so many hours was that I had so many things partaking in this event would net me. Those were slowly fading into the night like my energy for this event was.

I had many runs where the biggest point gain I had from a single kill was 25 points at best. Nothing would come even close to that last post I talked about. Sometimes I could get the rather rare 100-point boss kill but it felt like I had drained the point pool or something. These last many thousands of points started to feel like quite the uphill battle. There would be moments when I’d get a couple of globals within a ten-minute window of each other. I was however done with just getting shrapnel. One thing that can drop is Mayhem Armor (L) and I’ve never had a piece of it. While you can only get the UL stuff off from the vender from my understanding. Even the (L) version of certain pieces could have a 150% markup on it. Making them quite a nice find when you get some.

For a while, the only thing that kept me going was just getting to the next Silver Halloween Mayhem Annihilation mission rank. Towards the end of them, two cosmetic rewards are rewarded dependent on the type of mission you took on.

While they are not worth much even more so the silver variant of them. They are kind of like trophies players hold onto to recall past events and how well they did in them.

Quite many years ago when I did partake in certain events I would come away with just something for joining them. I never got this far into one ever. They would usually be worth a couple of PED if that and during times I could not afford the game I sold them for what little I could get to cover some of my ongoing operations that were slowly drying up in profitability and further increasing my liquidity issues in-game.

While it seems a bit silly when I hit rank 8 of the Silver mission and picked up the Silver Ram Horns they are cosmetics you can wear. They put a bit of a smile on my face and I’ll be holding onto them. Perhaps one day I’ll get an apartment in this game but not at the current rates for them and these horns will sit on one shelf of sorts.

I do not like how they look wearing them so you don’t even get a screenshot of that! It was at least a little something for a lot of effort at this point.

The biggest reward from rank 8 was further bonus progress on my Codex for the Halloween Creatures. I had been wondering for a while now how high of a rank codexes go and what happens when you finish one. I was slowly getting near to those answers. 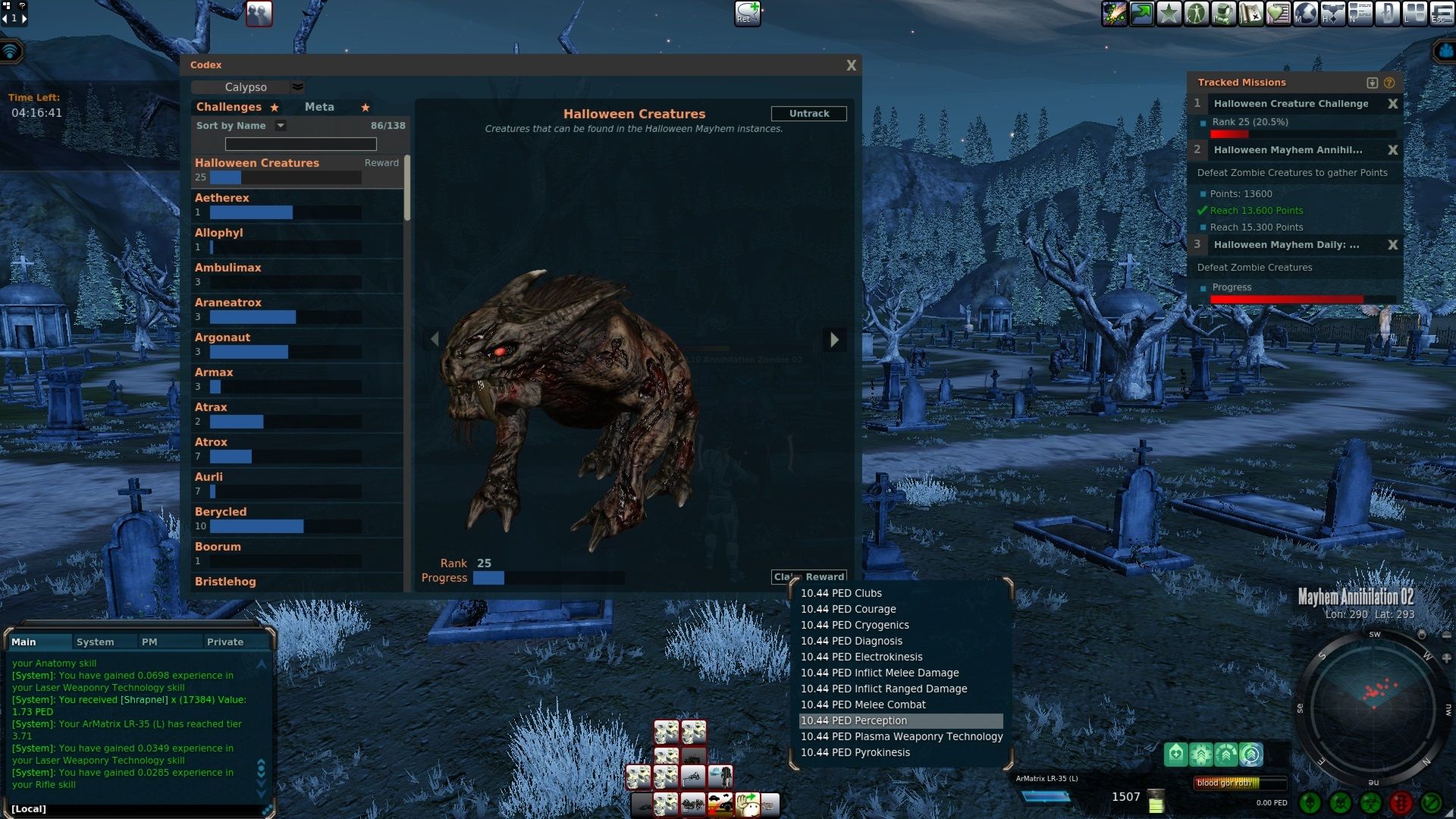 Thanks to that post I shortly later managed to finish rank 24 on the Halloween Creature codex. Netting me a further 10.44 PED of Perception skills. The rewards just from all these codex skill gains I was getting have been rather crazy.

There would be a few other runs after the screenshots I’m sharing in this post. Where they were just nothing. You might often wonder why people stop so short of reaching a very intense goal and I can just say keep up the energy to do so has become a mountain onto a mountain.

I’m rather glad now I only selected the silver difficulty for the Mayhem Annihilation event mission. Picking gold would have been way too hard at 50k points for the level of instance I have been farming. Picking bronze would leave me a bit disappointed as that only requires 7k points to finish and as you have seen getting a 2.5k point gain would make such a small mission easy to finish. After some long hunting sessions, it was time to run off and buy more guns. I have a few spots to check and while many only have one for sale of the gun I was looking for. Prices seem to become somewhat reasonable.

The only thing that is still quite high are amps to put on a gun for increased damage and efficiency. I decided to just keep using the unlimited one I had that is not that great. I would note though a few runs that I was constantly losing about 100 more PED on those runs using that amp. Perhaps it would have been better just to have paid high markup or not use one at all.

I was at least getting closer to reaching my goal of 17k points. It still felt so far away yet it did feel like I was making progress. My losses did start to mount up, however.