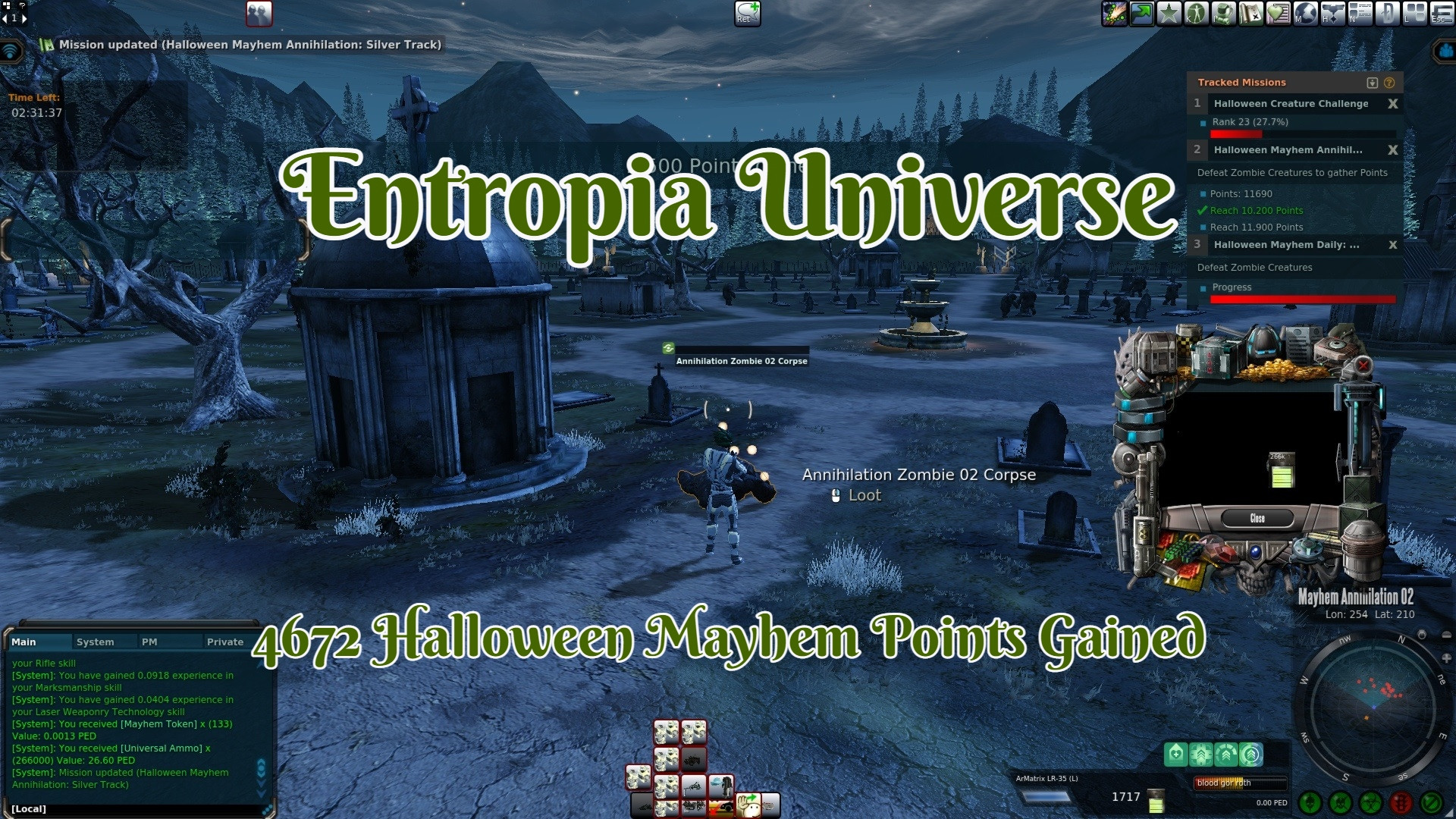 This was a wild five hours the kind of run you dream about. While I’ve had some rather slow sessions while grinding out the 2022 Halloween Mayhem event in Entropia Universe. This one kept me up for hours till the end of the timer.

You just never know if an instance is going end up being crazy or a flat-out dud. I had an instance run or so before this that was rather bland. I ended up ditching out of those one or two bosses into it. While at times it feels like doing so really has no impact.

It’s moments like this that make you wonder if that ended up being the case. Would this have happened if I was not switching out of instances? Chances are doubtful. 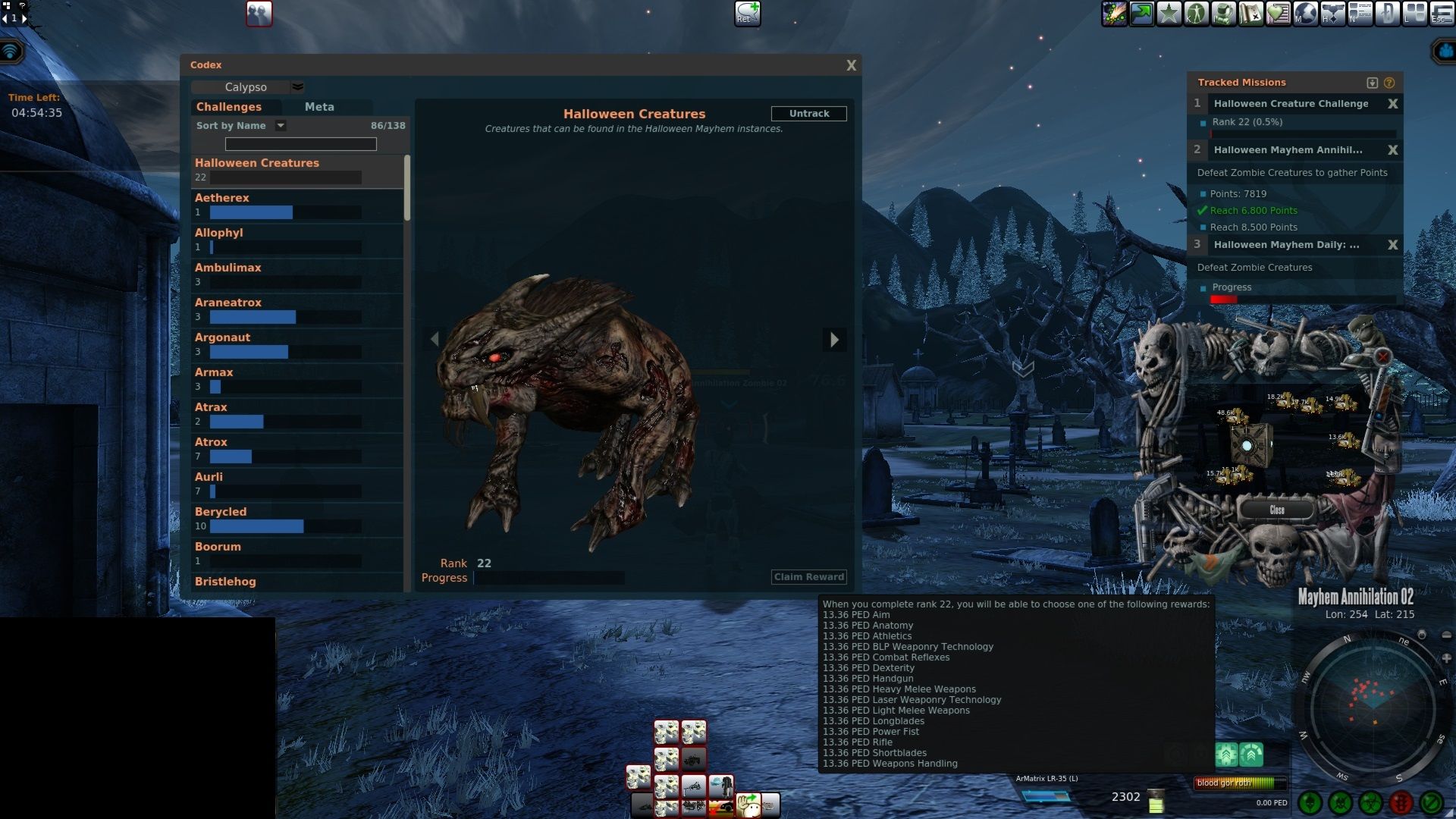 Early on I finished off rank 21 of the Halloween Creature codex netting me 11.88 PED of the skill anatomy. These skill rewards are starting to get rather juicy. Just buying that much of another player who chipped said the amount of skill out of their brain out would cost around 136 PED. I was already feeling great about this run.

Not even an hour in I had already gotten at least 3 30-point, 6 5-point, and a lot of one-point kills. More than enough to have been greater than my last run. While if that would have been all I had gotten on this run it would not be that great. This was just the start of something bigger. 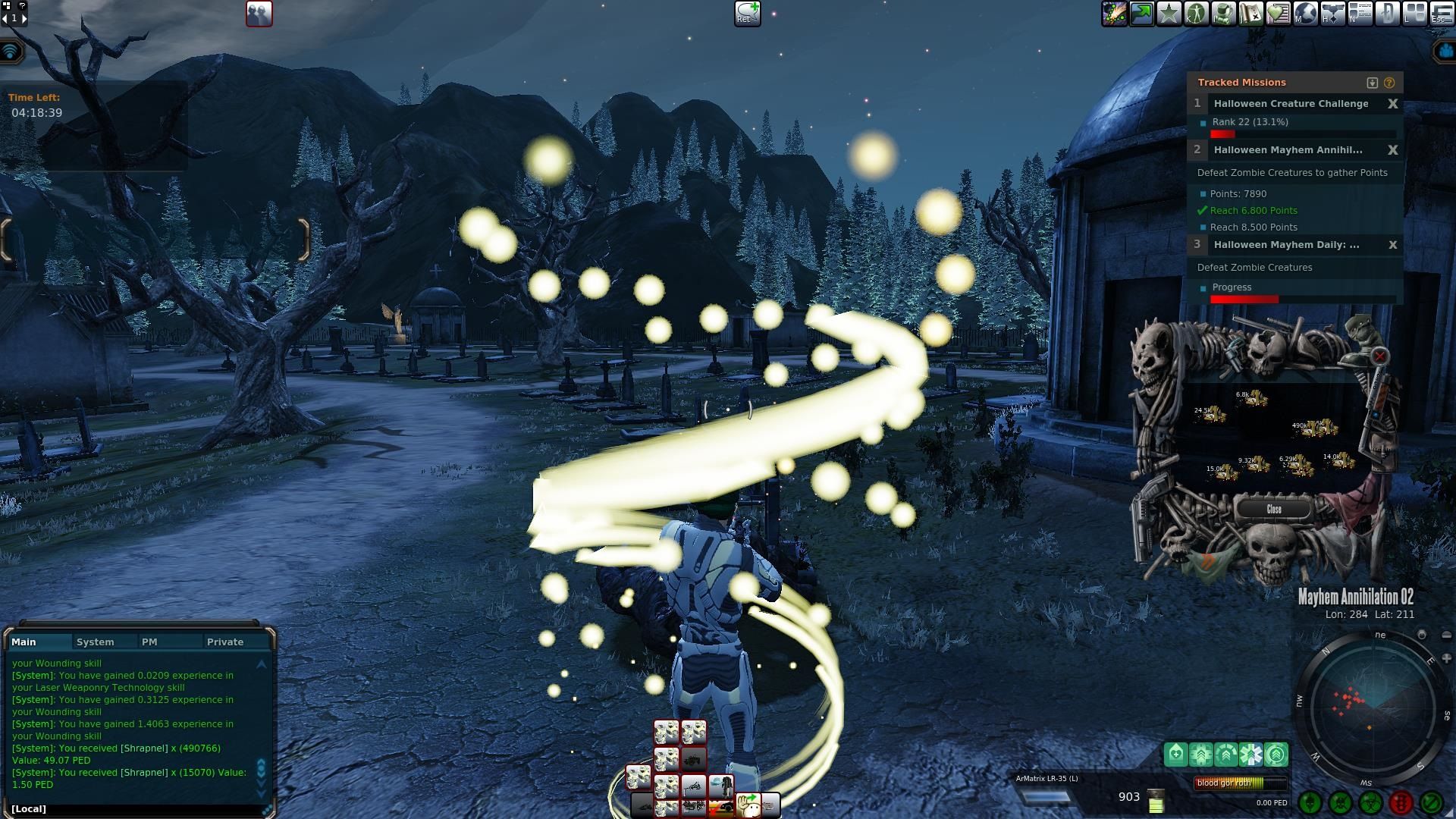 I even got myself the bare minimum to consider looting something a global-- 50 PED in loot. This started to put me ahead PED-wise on how much ammo I had used up till this point as well. That has been something just not happening for me this entire event.

Needless to say, I had quite the mood change over a rather dull day I had been having. You tend to get these little runs of excitement before you lull yourself back into very long grinds. About twenty minutes later I killed a zombie that award me 250 points! As far as I’m aware this is the second time during this event I scored 250 points. While they can get much bigger than that I was now more than happy with the points I got on this run that if the rest of it went silent on me that would have been fine.

A couple of minutes later I killed the boss for the second time in this instance and he did not give any points. I however decided at this point I was not going to dump this instance and start another one. I was going to finish it through for the full five hours. 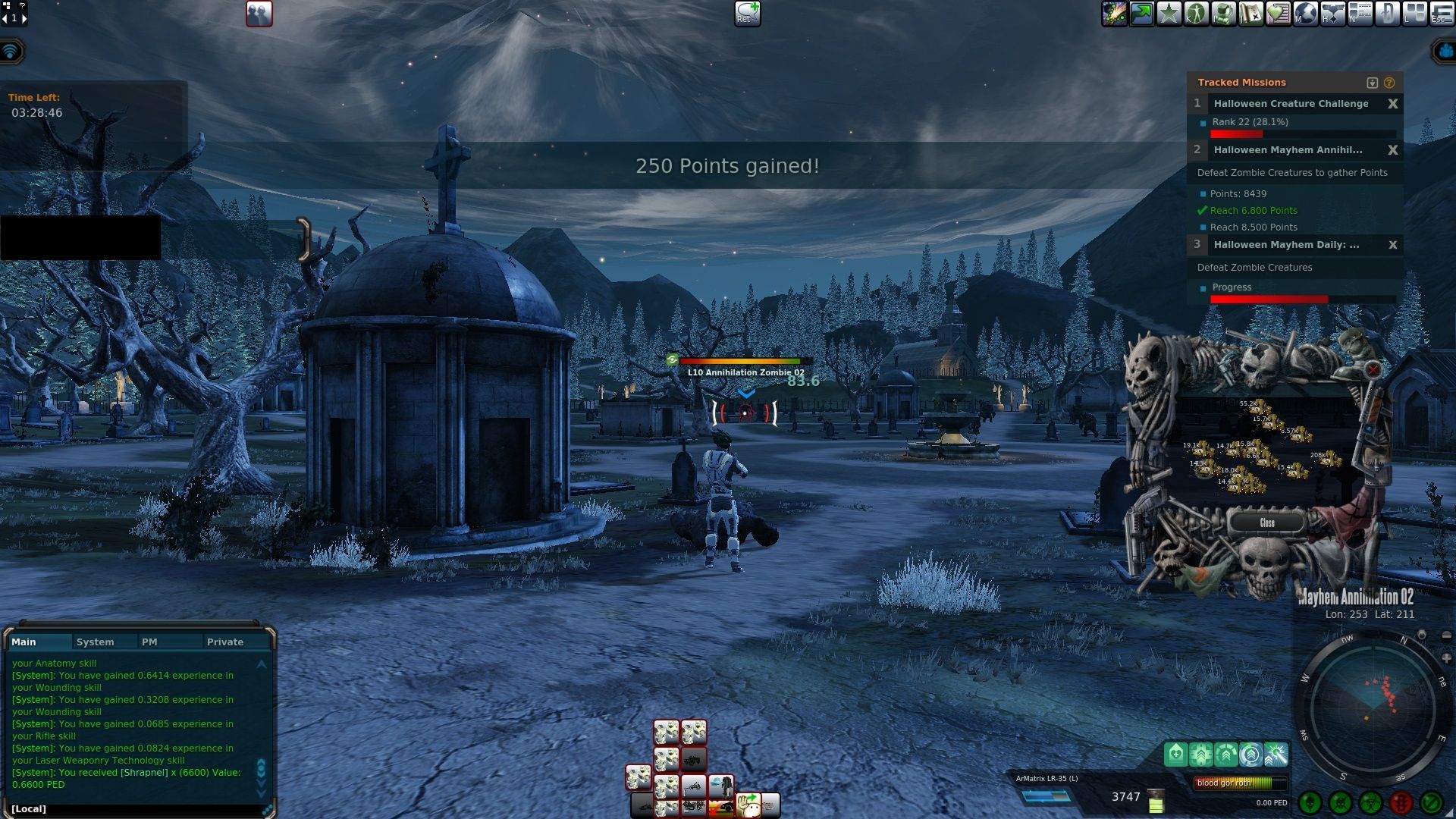 A little more than half an hour later of killing I got another 250 points. Just look at how poorly that zombie looted with just 0.6 PED in shrapnel. Thankfully it was loaded with points. I had gained so many points in fact that I had finished a rank of the Halloween Mayhem Silver mission. The rank 5 reward for that was 53 Mayhem tokens, 26.6 PED of ammo, and bonus progress on the Halloween codex.

That bonus to progression on my codex was enough to finish off rank 22 netting me 13.36 PED of anatomy skill. The fact that that is one of the skills I’ve been aiming for from these codex rewards was just extra spicy for how hot this instance was running.

A fair bit of time later I would reach level 46 in Ranged Laser (Dmg) profession. Those wounding skills I’m gaining are just racking up my progress in that profession like crazy. I also had some other levels up that are not that important to me for now. 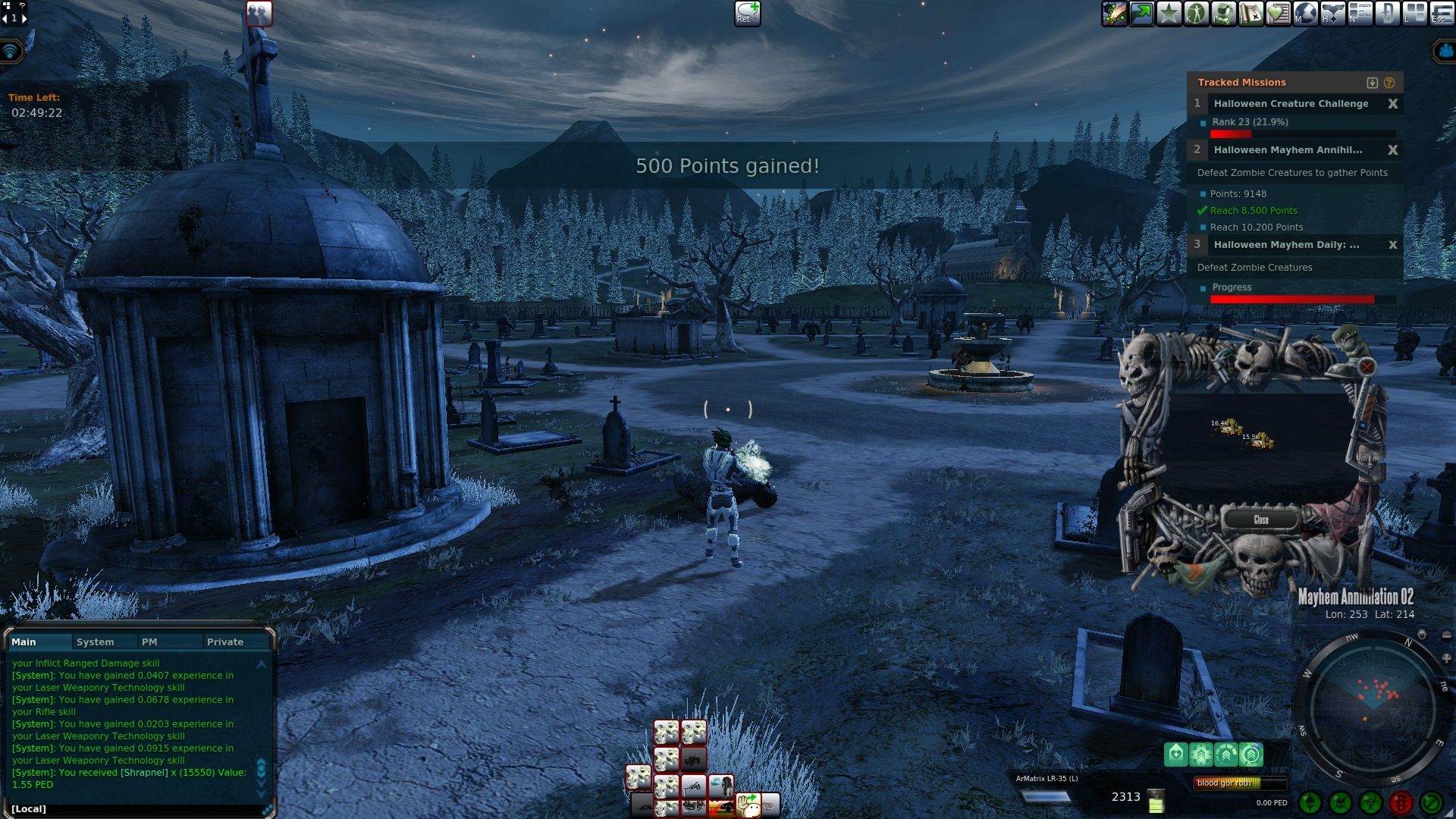 Shortly after that boom 500 points! At this point, this 5-hour run was already going to be the biggest amount of points I’d gained in that amount of time. The crazy thing was I still had over half of the time left on this instance so kept grinding it away. 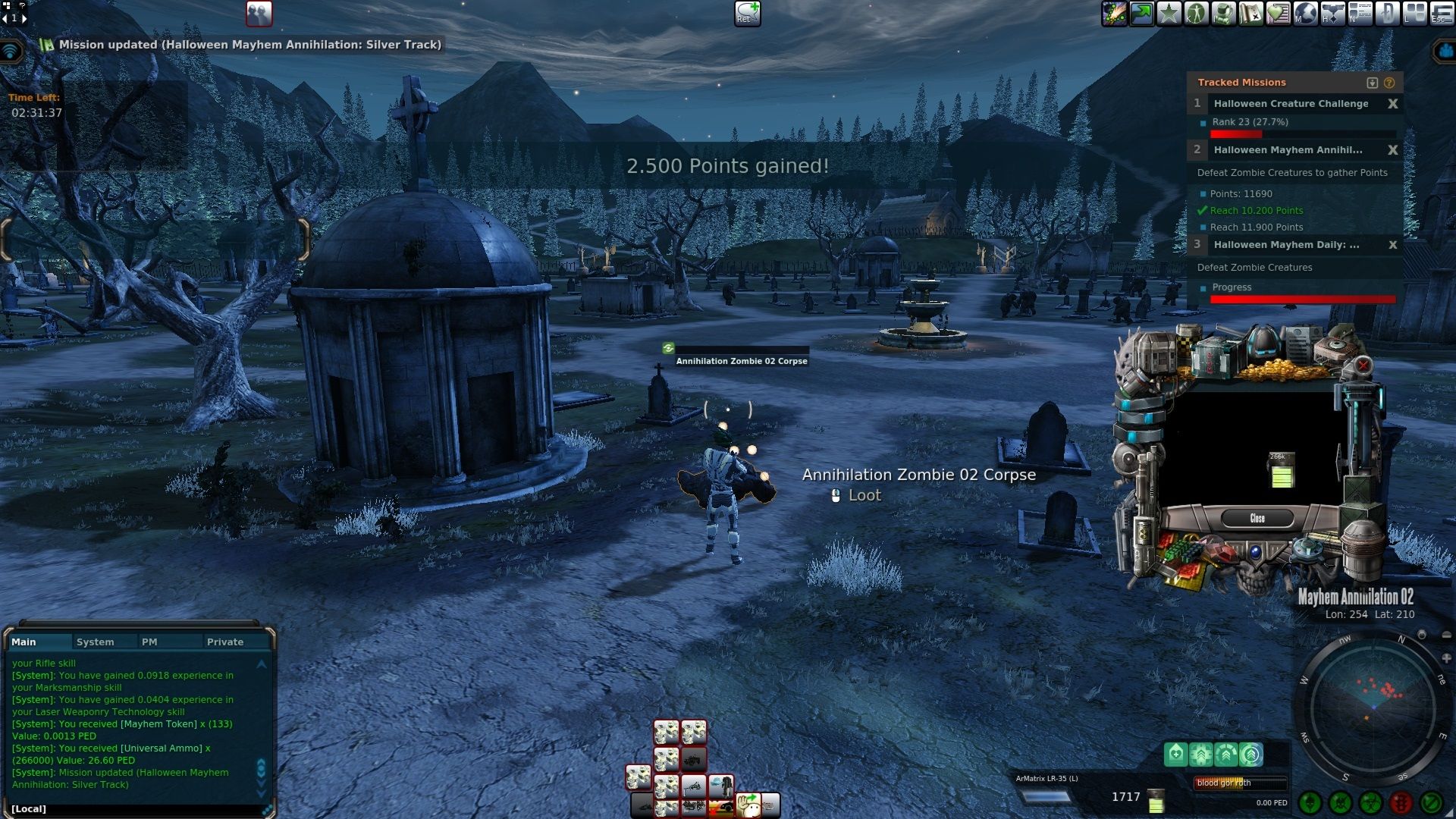 The maximum amount of points you can get off a single kill is 2,500. I never thought killing in Annihilation 02 from level 10 zombies I would get such a kill. It also finished off rank 6 of the Silver Mayhem Annihilation mission netting me 133 Mayhem tokens and another 26.6 PED of ammo.

That would be the last kill for this instance that I’d get a popup message scoring 250 points or greater. It was not done by passing out points as if they were candy on Halloween.

I ended up scoring 2 100-point, 2 50-point, and a lot of 25-point kills among many other smaller amounts. Enough to my shock to reach yet another rank in the Silver Halloween Mayhem Annihilation event. Rank 7 awarded me 53 Mayhem tokens, 26.6 PED of ammo, and 0.2 PED of Stamina. Stamina is quite hard to come by so that is quite a big deal. Before the instance finished I even got myself another global. This time it was off the boss. I was hoping there would be something amazing in the loot. However, it was just more shrapnel. A bit of a disappointment. I was somewhat getting bosses to spawn around the minute timer since I had switched over to using my ArMatrix LR-40 (L) since the amp I had for my L-R35 had broken. So I knew I could squeeze in one more boss kill before the instance would close and I’m glad I did. As I got 64 PED off him but just more shrapnel for the most part.

What a nice little ending to the epic run of 4672 points I ended up racking up on this instance run. It was about the time of day the sun was just coming up and I collapsed into a four-hour slumber with how exhausted this experience made me.