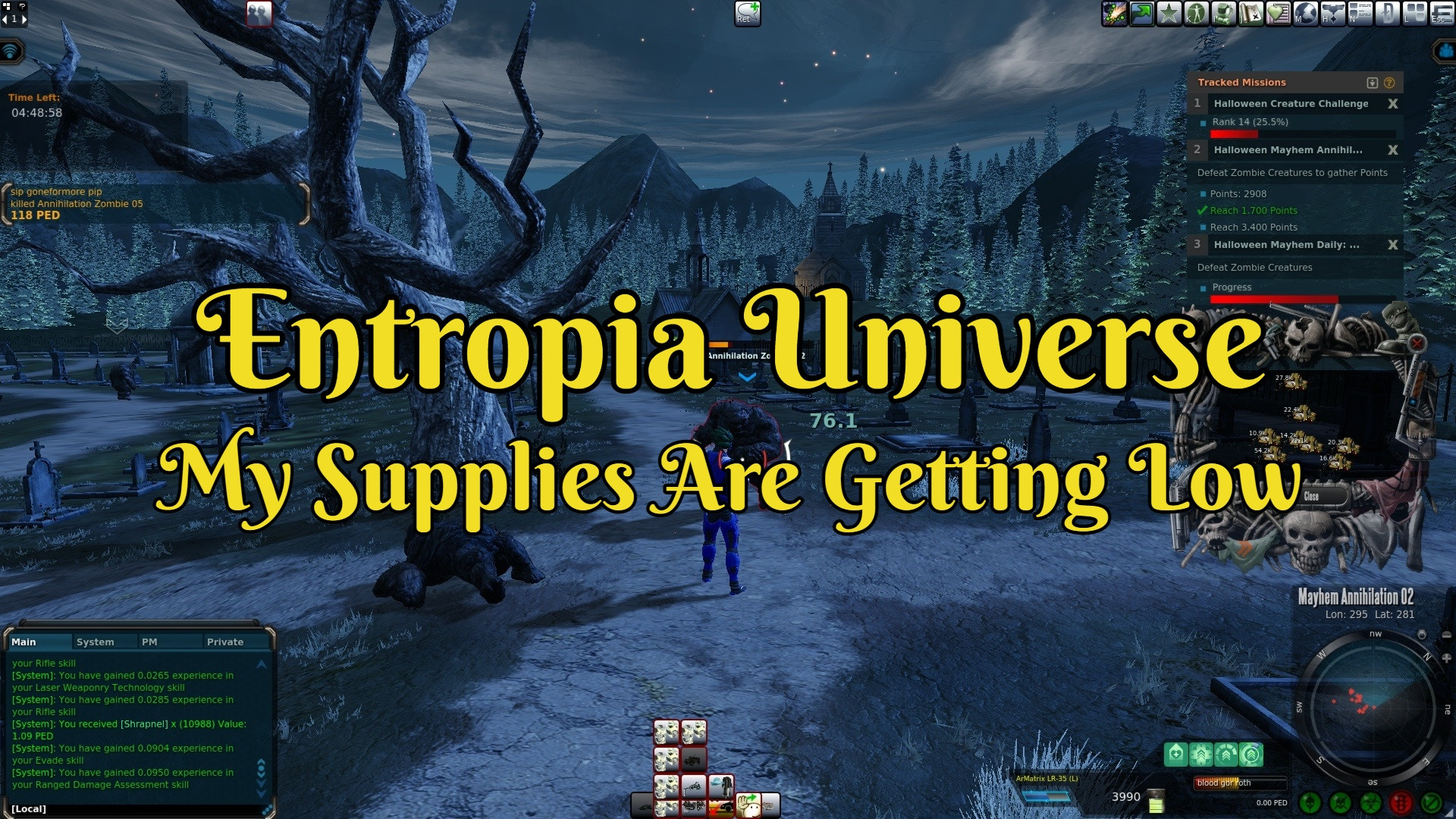 Many items needed to keep grinding in the Mayhem event are getting insanely expensive. Since I’m not an uber player and I am quite reliant on limited guns that break after so many uses. I knew this moment would happen eventually.

One of the biggest drawbacks to doing the massive mining run I did before this event was that did not go well. I lacked the funding to buy up a massive stockpile of guns, gun amps, and any else I felt I would need for this event early enough.

I also had no idea I would still be going at it this far in. One thing I have not brought up much is I have burned through a few guns, and gun amps I had bought beforehand. It is becoming currently difficult to find replacements let alone stuff that is not insane priced as the crafters struggle to keep up with demand.

I sometimes will go through an entire gun and then some in a single instance. There are a few factors at play such as how many breaks I took if I ended up staying for the full 5 hours or leaving after a couple of bosses and getting a fresh instance.

Trying to buy anything off the auction house at this point is not even reasonable anymore. That is even if you could get what you wanted. I’m flat-out checking player shops in between instances at this point and when I’m not running skill boost pill. 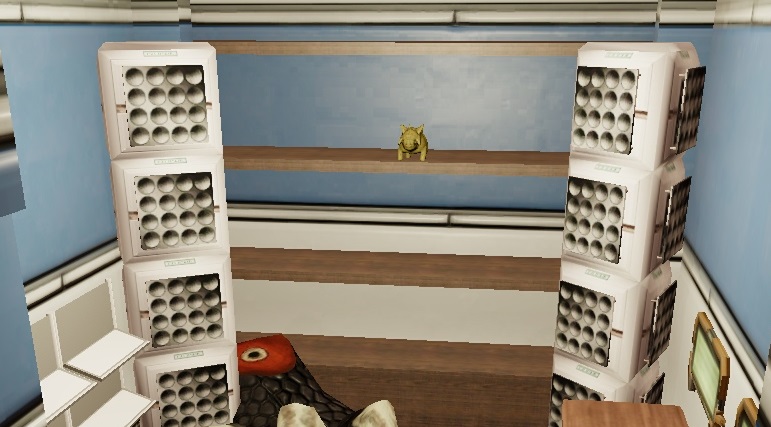 A screenshot of player shops with a bunch of shopkeepers doesn’t highlight the severity of the issue either. As you don’t get the visual since you don’t see one shopkeeper after another empty. There are lots that just use shelfs and they are bare!

If you look into the stats for some of these crafters you can see many started months ago doing massive crafting sessions. As someone who mines for resources, I have been enjoying that constant demand for certain ores. It’s events like this that give me better insight into the game economy.

The list of shops I have with guns even stocked somewhat anymore is almost zero. I have like one person left that appears to be greeting everyone who enters still. The owner runs around trying to restock things as they sell. The more connected players in this game have crafters they will bulk buy from. As a result, I am guessing that is why some of those crafters have empty stores. They more than likely have enough private deals that they can’t keep up with that demand alone.

At some point, if I can’t get further supplies at a decent rate I’m going to have to call things early. I am half tempted to want to take advantage of the mining side of things since certain ores have skyrocketed in price even the stuff that I’ve had some trouble moving in the past is even starting to sell.

The issue is I’d have to do mining without amps and trying to get a secure transport I’m not even sure is possible back to the main crafting planet. It’s like the entire game economy is all pouring into keeping up with players grinding this event. You would think there was a universe-wide war waging on or something in-game.

It also makes me a bit concerned. Since there is also an expected Christmas Mayhem event as will not leave a lot of time possible between these two events. These trends are however good to learn about so I can make note of what is going on and hopefully next year take advantage of the situation if I happen to have the liquidity to do so.

I never got the full view of this during the Easter event. As I did not last that long. I don’t even think things felt this bad during the migration event either. Players are just going all out on this and it’s been insane to see. I almost can’t blame people though. The amount of skill grinding I have been doing has been ridiculous and there are some huge things people are getting. I have skills that I will have gotten multiple professional levels up on during this event that have been sitting at the same level for a good month or longer now. At some point I expect my codex progression to more or less just stop. I am only grinding in category 2 still which is level 10 zombies for the most part. I still am however getting further progress but it is getting quite slow.

I think this might have been my best boss kill yet and it was still only 26 PED in loot. I’ve yet to global on these guys. Granted most players seem to farm those hoping for a big point reward and I’ll admit it is nice sometimes getting 100 points off one of these. The bosses supposedly have some extremely rare loot. I will sometimes check the global lists for rare items and I’ve not noticed anything out of the ordinary. It is also possible the drops of the boss don’t trigger a global. It is hard sometimes to find decent information on what items there even are. 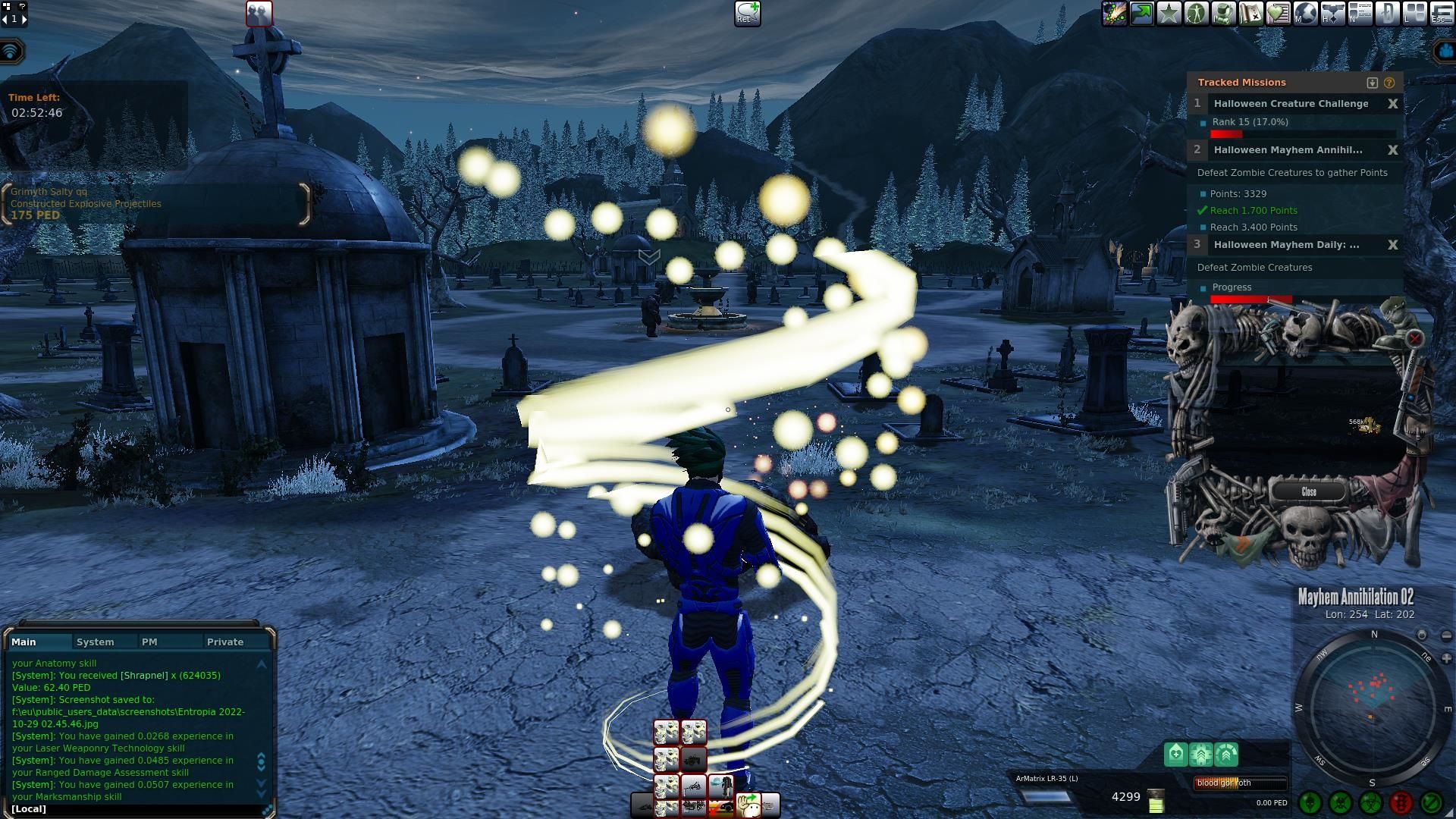 I was however proven wrong on this particular run! All the fun would be had in the middle of it. I ended up getting 62, 56, 52, and 50 PED globals! With two of them within a couple of kills of each other, I was still scrolling up at the last 62 PED one when I got a 56 PED global.

I love it when it happens like that. I can sometimes go an entire instance without getting a single global. Then a few hours later I’ll get a cluster of them. Which helps to wake you up early in the morning when grinding away for long amounts of time. For now, I’m still being to keep moving forward. The losses are slowly starting to add up but they have been a lot better than I was expecting. Still no rare tokens or anything super exciting. Still lots of days left in this event to keep going as long as I can.