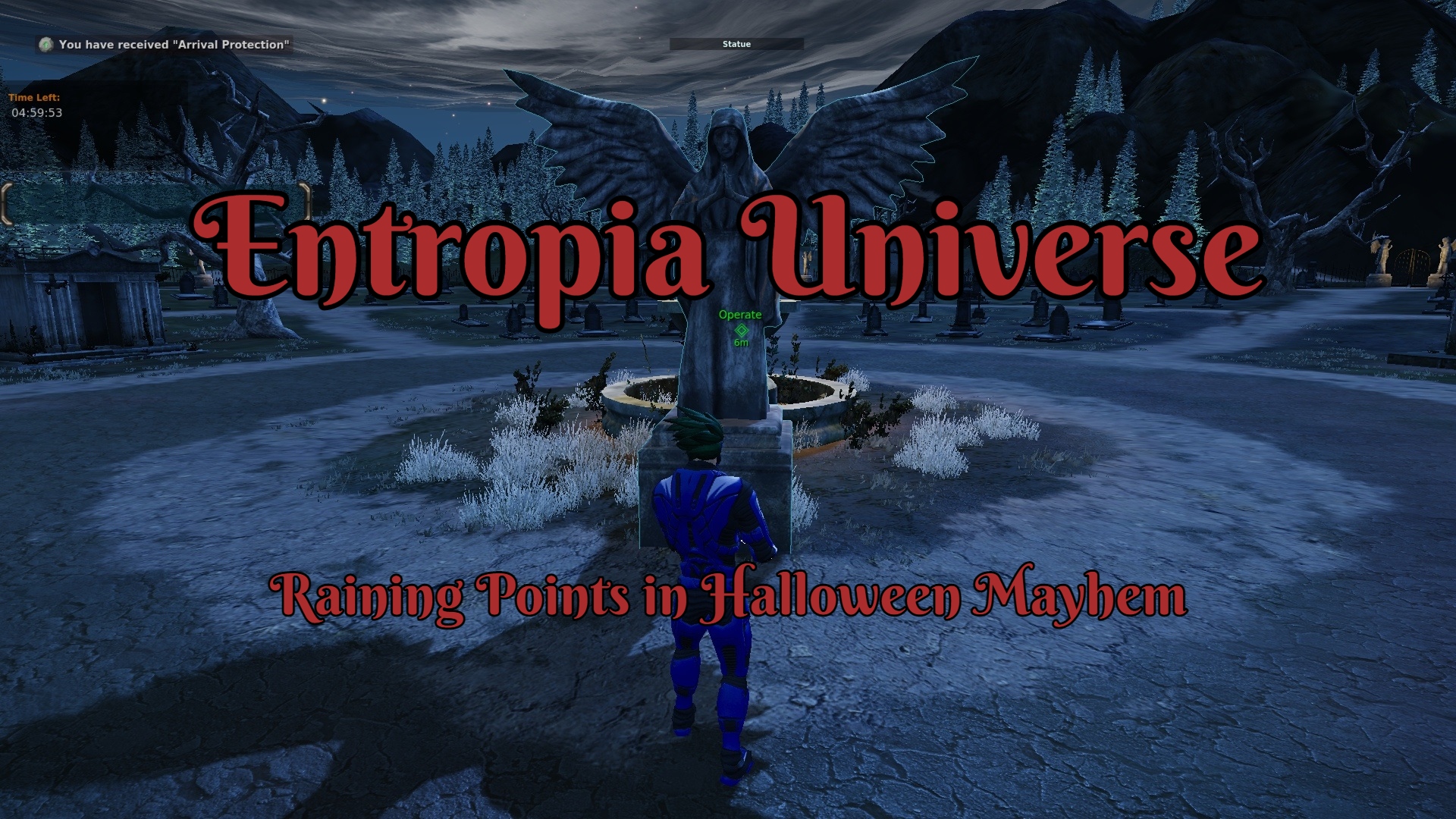 I was in shock at how many points I earned in a single hour of this run. I was still grinding away in Mayhem Annihilation 2 in Entropia Universe.

You never quite know when an instance run on this event is going to be amazing or truly brutal. Some runs would pop off right away; while others, towards the end of the time I had left in the instance. I would also have a lot of just blah nothing. This time something interesting happened.

One long-term thing I’m working on for the 2022 Halloween Mayhem event is the Mayhem Annihilation mission. My last run switching over to being in category 2 with lower-level creatures seems to be paying off since I was getting a bit of a higher kill rate and this run highlighted it well.

In total if I want to finish the entire Silver version of the mission I choose as my challenge I need 17,000 points. The main reward from this mission is Mayhem tokens, a couple of bucks worth of universal ammo, and at the later stages some cosmetic items.

Sometimes I would get into these runs and I could go almost an hour only earning a couple of points. It is random if you get 0 points on a kill up to 2,500. I’ve explained this in more detail in other posts.

Up till this run, the biggest amount of points I had earned from a kill was 100. When I did get that many points it was mainly off the boss that spawns and even more rarely from one of the normal zombies in the instance. 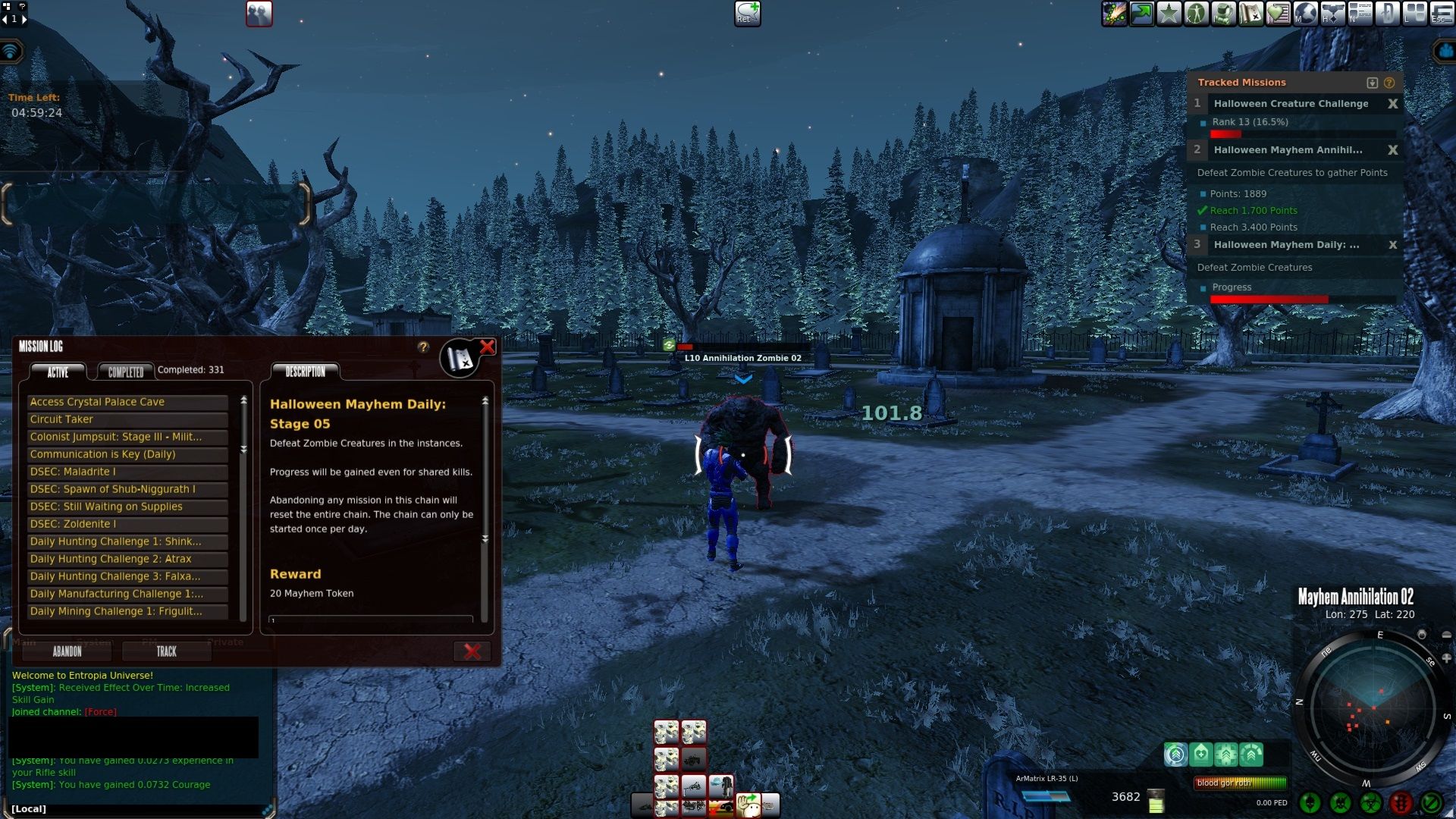 This instance run ended up going quite a few things for me as well. I was nearing the finishing stage of the daily mission before I would reset it. At stage 5 while it takes a lot of kills in category 2 it would reward with me 20 bonus Mayhem Tokens.

I would then reset the daily mission which you can do once a day and you start with the first stage earning you 1 token. In later runs, during this somewhat long event, I would decide to reset after I get to stage 4. I was still however at this time going quite hard at this event and not having that bad of a return either.

As I tend to do on some of these runs as they go up to 5 hours in length before I need to switch to a fresh instance. I was taking a look at my skills. Up till now, I was doing a decent job at keeping up 50% to 100% skill increase duration pills that I’ve been stockpiling for months. 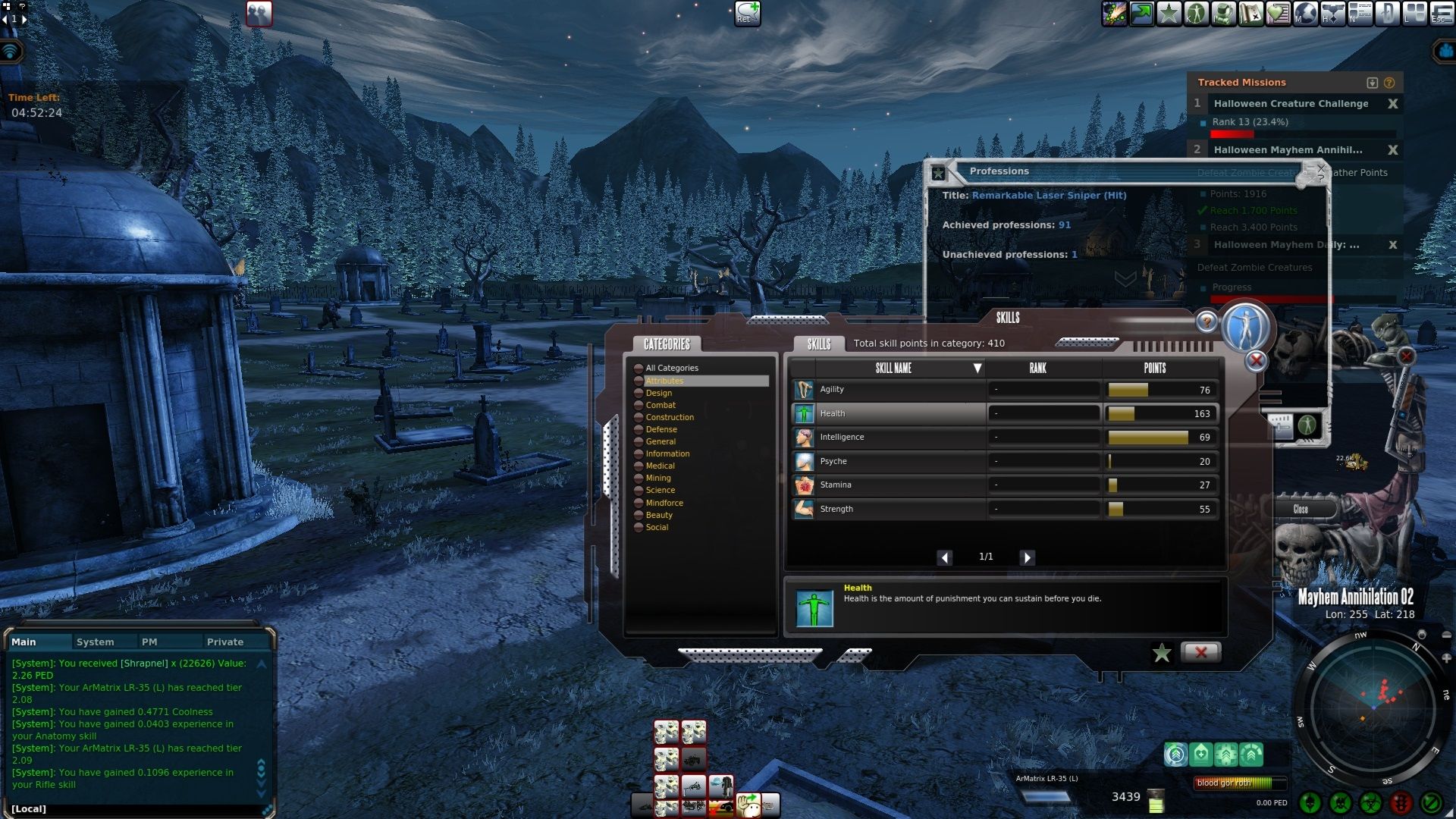 The result of that and quite longer grinding sessions than I normally do when I’m not mining has been quite the skill and stat incensement for my character. Up till this point, I gained two or three entire health points from this event if I had not already lost track of how many I’ve gained. I could sometimes go an entire month without graining a single health point so this was quite a massive deal for me.

The loot was not always the best. Many times though I would get enough 20 PED loots here or there that it would make up for going hours without a single global. Maybe I was not always breaking even if but I felt this long into the event with how hard I was going I was holding my own decently.

A lot of the time I do just sit near the zone for the instance. While I don’t need the repair or trade terminal till around 3 hours into each run. Nothing spawns near it so I have a nice place to remain safe without getting any adds on me. 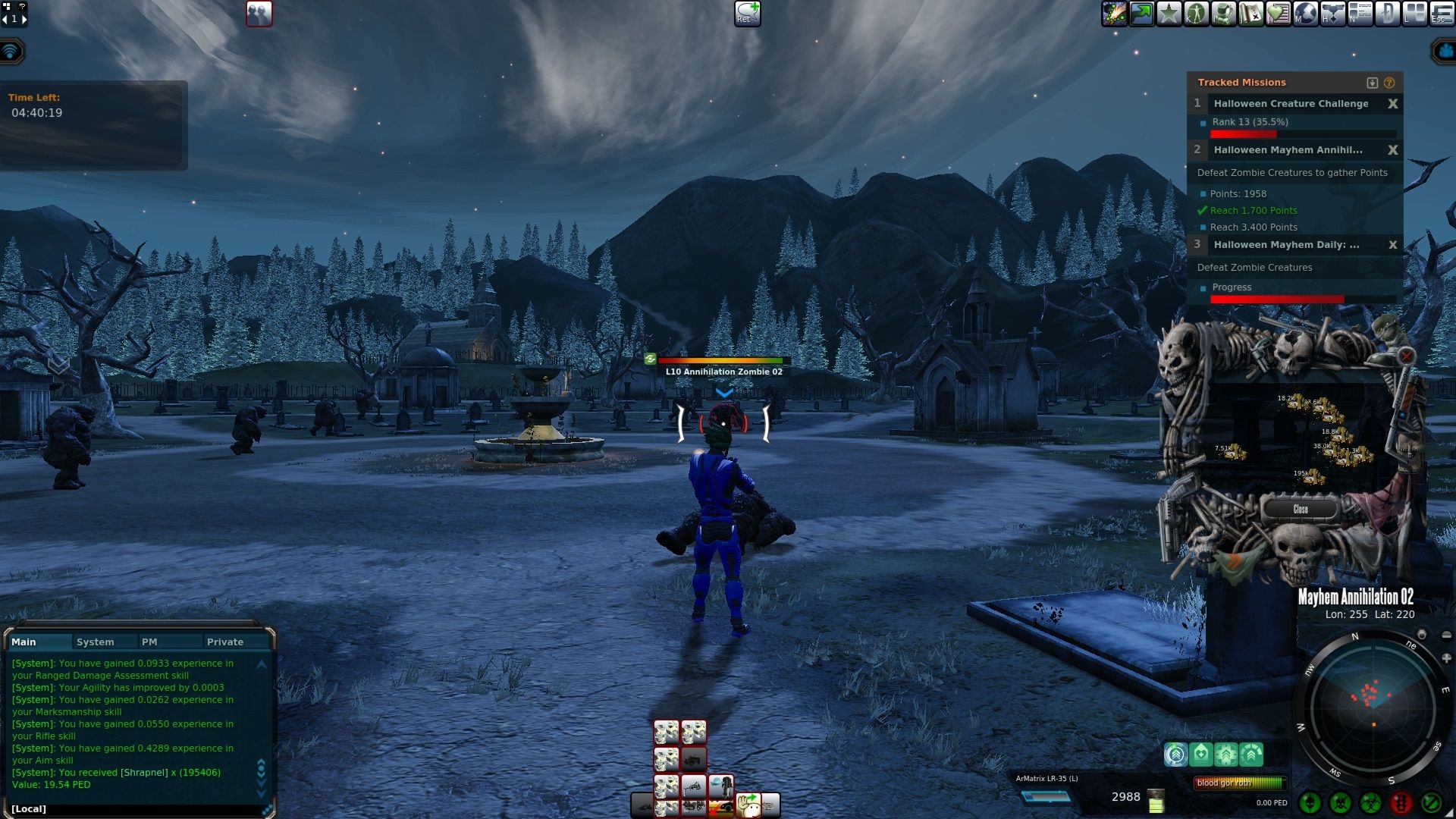 While sometimes I do wish the instance was a bit bigger so I could have more of a walk around it. I found the backdrop to still be interesting enough to keep me from going insane from the constant pew, pew, pew of my laser guns and the sound the zombies made.

There were many times I would however make my rounds around the instance. Mostly to ensure I was doing my best to be killing creatures other than the same respawn over and over again. While the creatures move around a lot they would sometimes get stuck or do not move depending on your range of them.

Nothing that exciting was happening for me near the zone in the instance. So it was time to make my rounds in the instance. The boss would also be spawning shortly in a couple of minutes. So I did not want to wait too much longer. 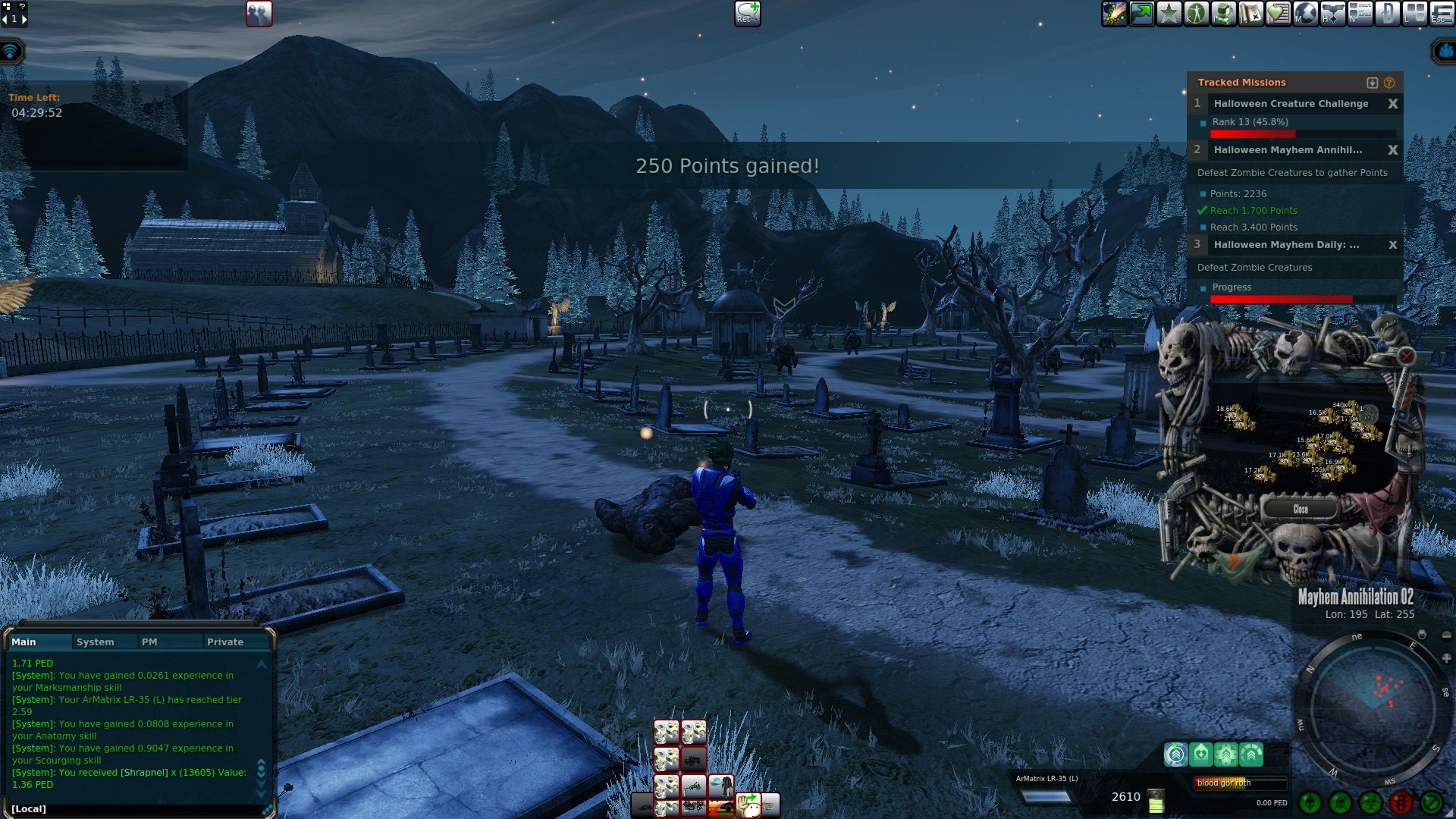 I’m rather glad I moved around a bit in this instance. For the first time since the start of not only this Mayhem event but the other one, I ran this year earlier in the year. I got a popup banner across my screen. I had scored 250 points off a single creature!

I had been wondering at what point the game would declare a such thing. The minimum points gained had to be 250. Otherwise, you were left on your own to notice if you killed something worth 0 to 100 points with the mission updating the visual number but not in a way you would notice on long grinding sessions like this 250-pointer was.

I had been keeping track in a notepad so I could try and estimate how long it takes to finish off the Annihilation mission. Along with was it still a possible goal for how far into the event I am. 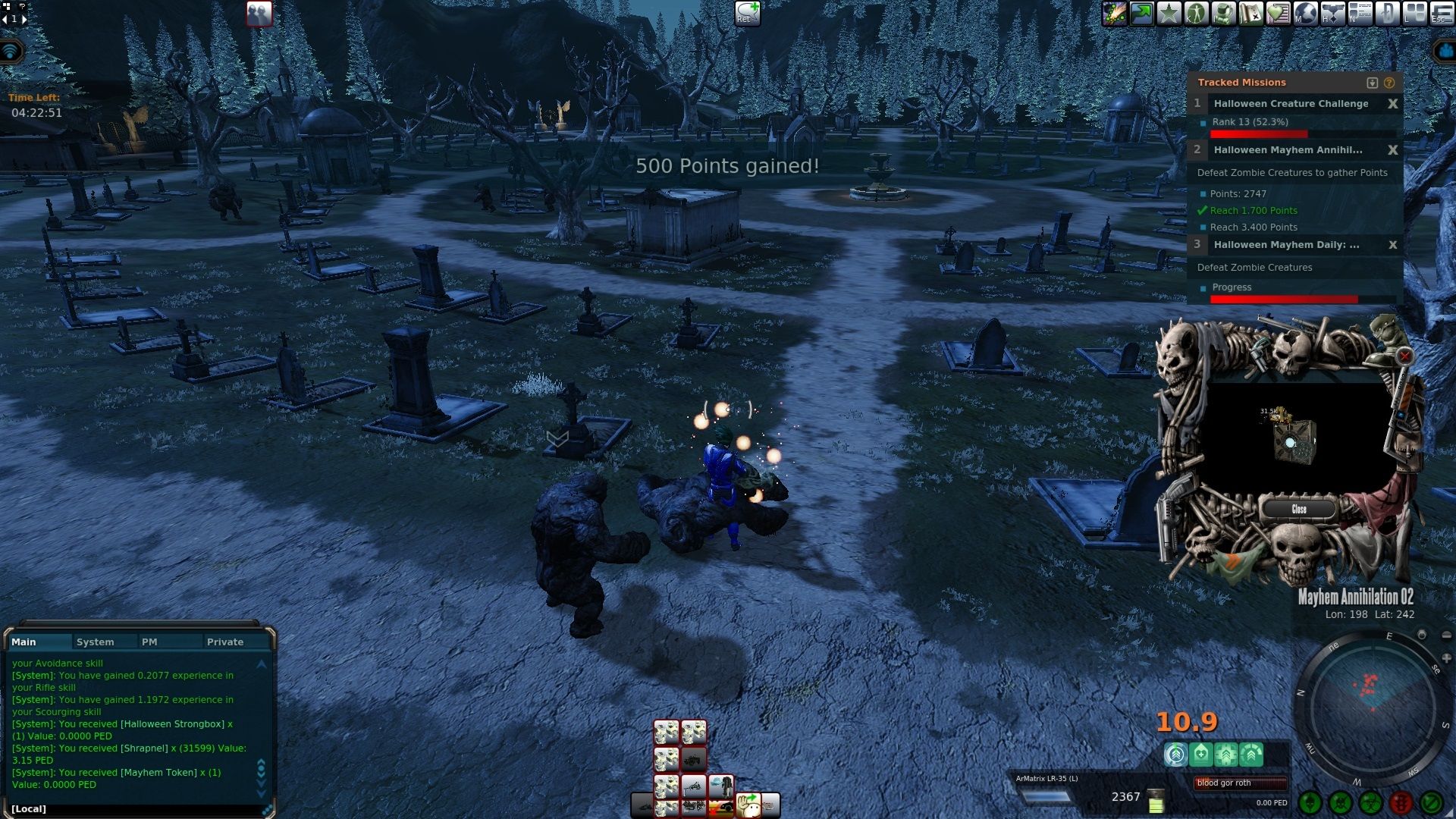 Since I got 250 points in this area. I felt why not clear out everything else. I have in the past lucked out and found a cluster of either loot or point gains in an area. Around 7 minutes later after moving around a little further I got 500 points!

In around an hour’s worth of time, I would rack up over 1k points in total. If only I had been getting these kinds of gains all along I would have already reached the 17,000 points I want. There would be times when not only would I not get 1k points in 5 hours I might not even get that grinding for a day depending on the amount of time and luck I had. 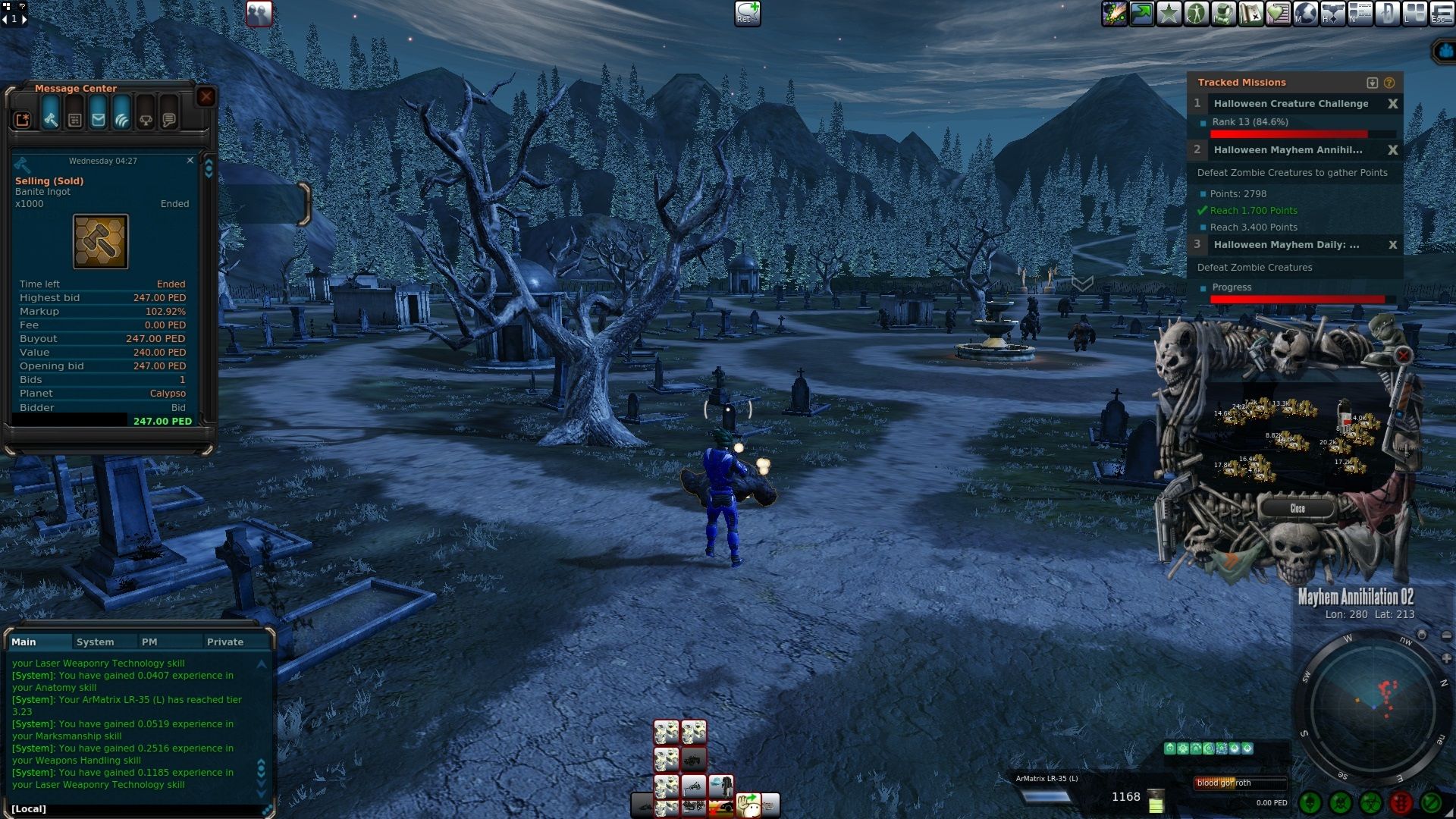 One of the nice things about this event is that I am trying to sell a lot of slow-moving ores at the auction house. This means I’m online a lot when I need to list another similarly sized stack to one that gets sold. Thankfully I still have enough liquidity to keep going in this even though I did not have to wait on ores from my last mining trip to sell to keep going. I was still racking up some codex levels for the Halloween creatures. I ended up picking up 2.78 PED worth of perception from rank 13. I’m just glad there is always an option from the skills you can select that I want. Codex has been a major contributor to trying to reach a long-term goal I have of increasing certain skills. 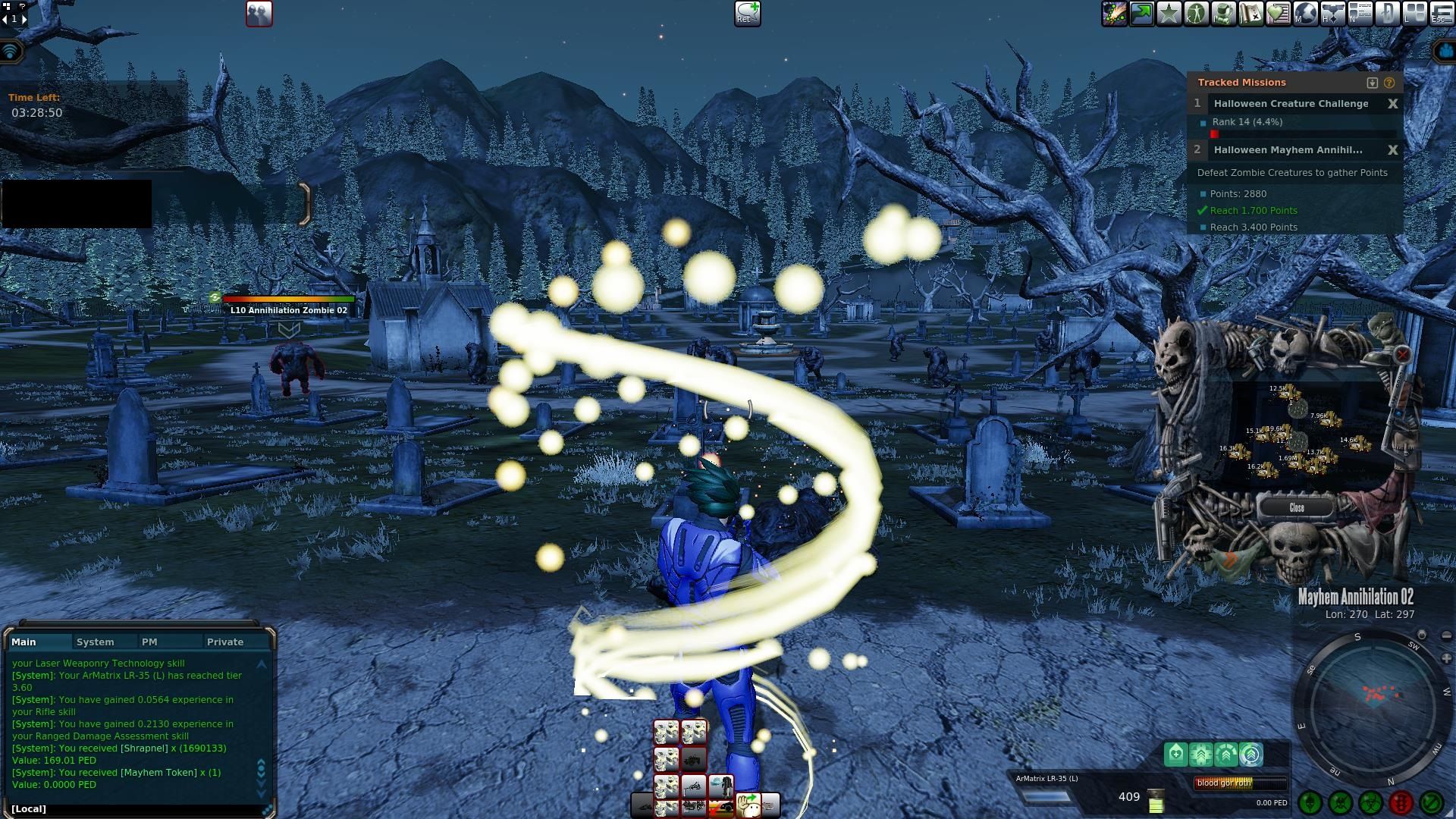 I would have just been thrilled with the points I gained in such a short amount of time. Thankfully I did get a single global on this run and it was an ok sized one at that being 169 PED. Still nothing more exciting than Shrapnel dropping but since I need ammo more than loot that would take forever to sell it was a welcomed sight.

Nothing else of noteworthiness happened for quite a well. As such this is where I leave you till the next time. This event goes on for a few more days and I’ll keep going at it the best I can.