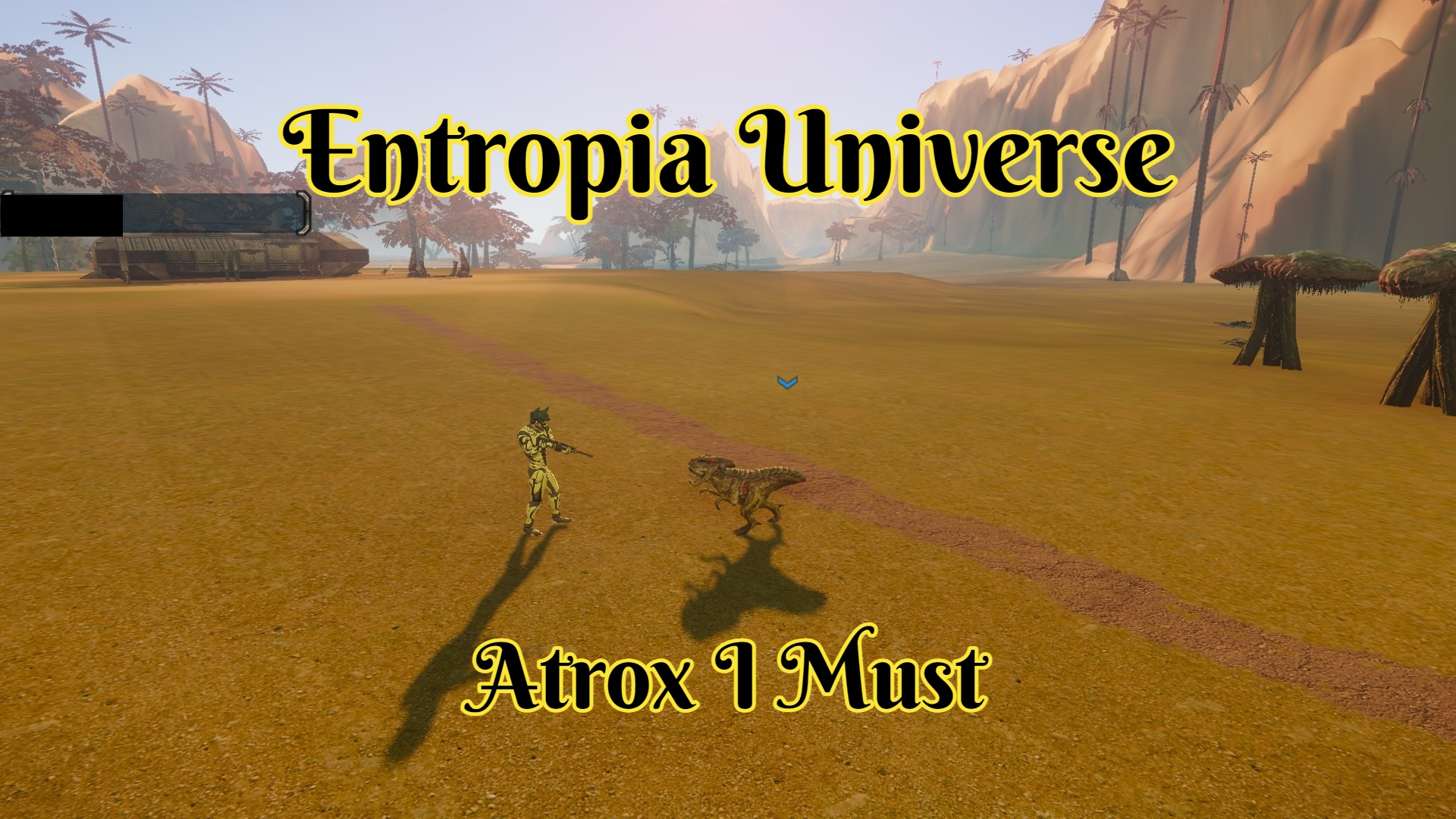 Naturally, a trip back to Calypso would not be complete without me at least doing one hunt on Atrox. I would be hitting up one of my newer favorite spots Jurra Plateau. I would also be clearing quite a lot further than I usually go to see how far the spawn goes and what kind of different Atrox maturity can be found here. 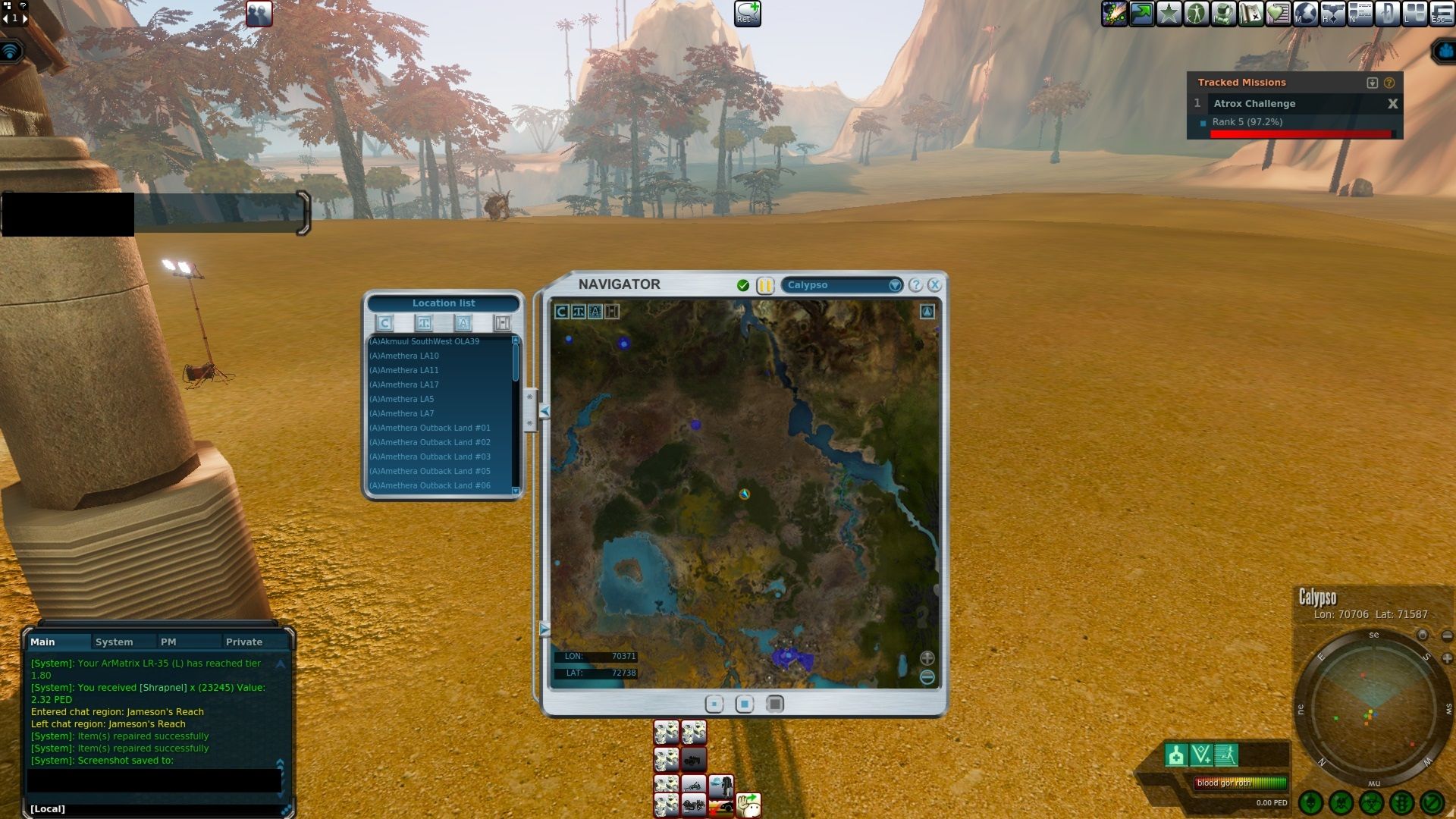 Atrox use to be for me back in the day a creature I would test myself against to see how my character was improving over time. Nowadays they are a cakewalk for me at least the lower maturity ones. In just Adjusted Pixie with 2A plates and an ArMatrix LR-35, I would be making short work of them.

One of the reasons I wanted to go here was due to how close I was to reach the next rank in my Atrox codex. I had killed a few Atrox during all the Hogglo hunts I would go on. Leaving me just a couple of kills short of finishing it off for a skill gain.

While this place is not as dense creature-wise as the old land area I use to camp back in the day for Atrox hunting. Just being a couple of steps away from a teleport and an outpost for repairing, selling, and storing. It makes it quite an easy place to want to go hunting at. Not to mention no land taxes here. 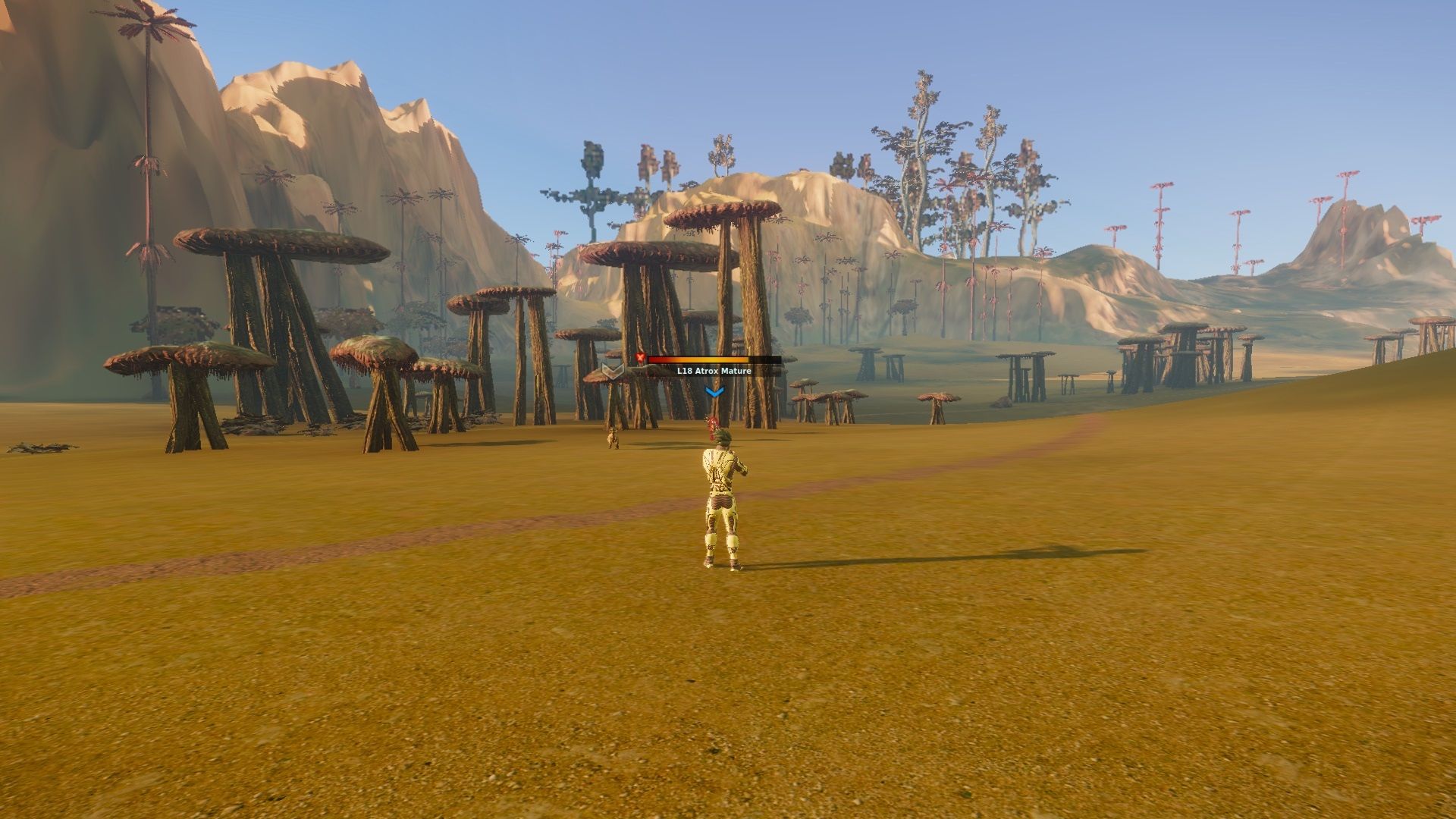 Into the mushroom forest, I went. For whatever reason my first pull I ended up messing up and getting two for one. I decided to take down the mature Atrox first before going for the young one. It did not matter as they both went down quickly.

The loot this run was quite unimpressive, to say the least. With all the people I kept running into I was expecting it to be a lot better than it was. Perhaps some players were farming the daylights out of them with some uber weapons that have eco on them I can’t even get close to competing with. I however counted to march on. While I have done a little way into the forest. It was not usually past this point. There is even this little dirt road that seems to be going nowhere. With all the players around I wanted my little spot.

It also did not take long to finish off rank 5 of the Atrox codex. I ended up selecting whatever skill reward that would help increase my looting professions. I’ve decided with what I was hunting I would want to increase that for the time being.

A lot of my other skills that I would love to increase are at a point it will take a lot of grinding and massive skill gains just to move a little bit. Many of the skills I have for looting professions are still quite low since that was added in long after I took my prolonged break from the game if I’m not mistaken. Using codex rewards to help boost that seems like the best choice for now. As I get huge skill gains. 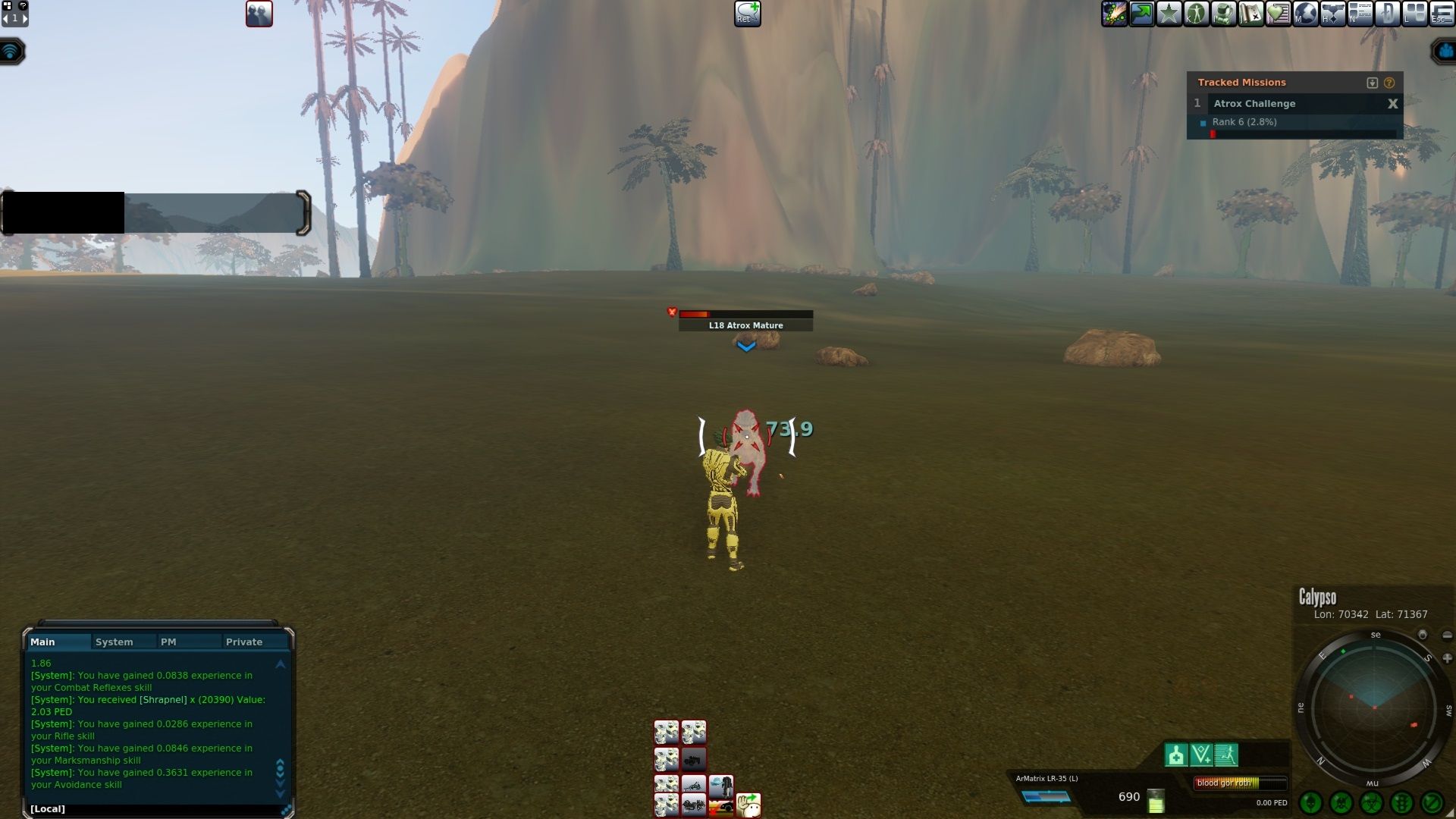 I did do a little backtracking in the back area somewhat near the teleport area and it was also camped. I even ended up getting a couple of adds on me while I was making my way checking out where other players were.

I ended up using the mountain somewhat as my path leading me in the other direction deeper than I have been in this area for hunting Atrox. I would end up encountering one more player as I went deeper into things. It seems like a couple of people was going around in their little circles fighting for Atrox that overlapped between the two areas.

I was somewhat shocked I even had to clear anything to make my way through the area. I must have arrived just at the time of respawn. Either way, those kills ended up being mine. 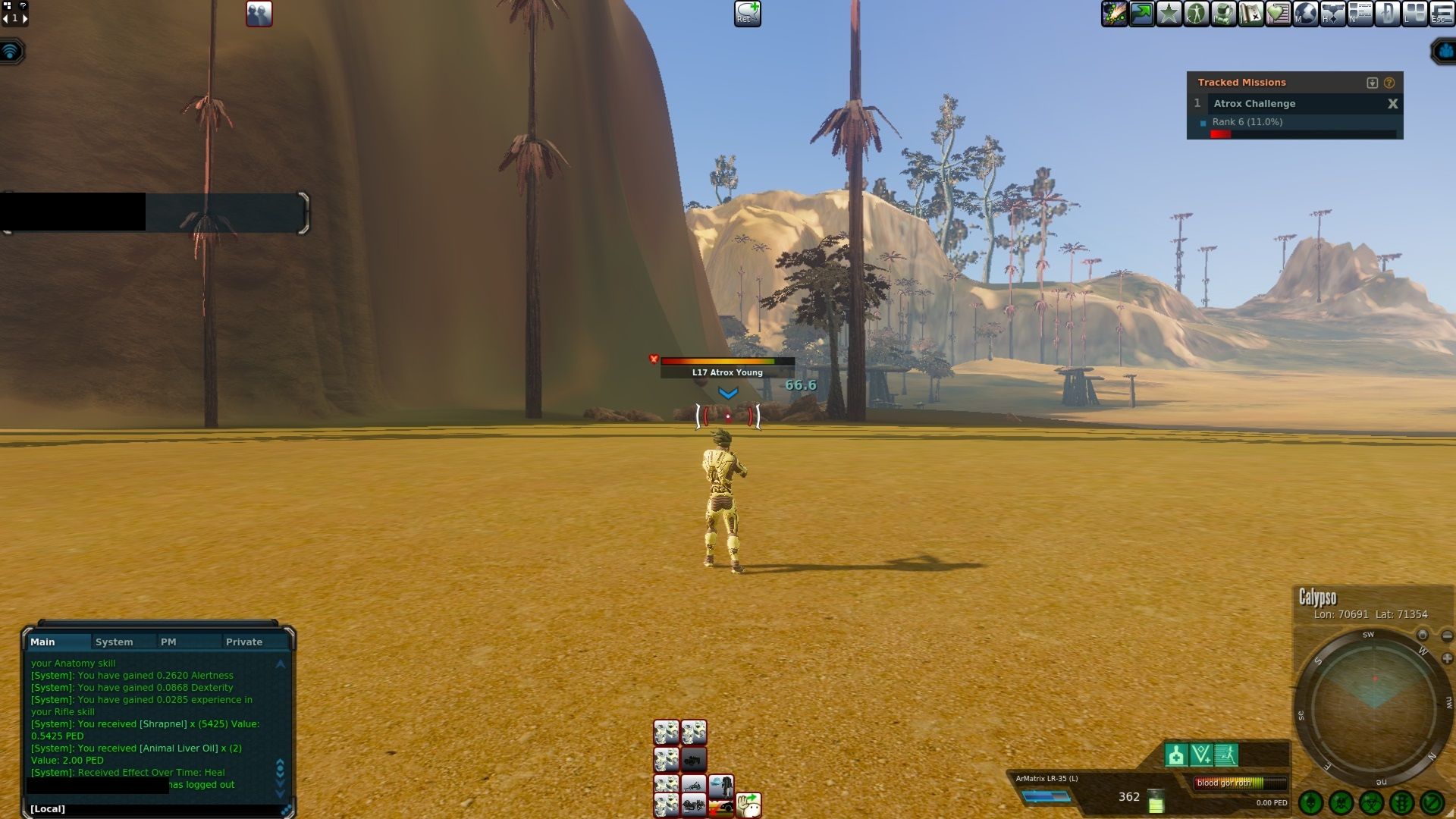 After getting this deep in I thought why spot here and camp the area? The heard seemed rather spread out at this point. I wondered just how far back I could end up going before I ran out of ammo.

The mushroom forest slowly over time started to be overtaken by more normal-looking trees. Yet I kept finding even more Atrox to hunt. I was half expecting to run into a lot higher maturity of them with how far I was out. Yet I was mostly seeing young. Overall it was not a great hunt loot return-wise. Atrox is a creature you either global on or take a bath on the hunt. There tends to be no real middle ground unless you loot something with some decent markup. Back in the day that use to be Empty Skill Implants (ESI).

I am rather shocked since my return I have not looted a single ESI. They use to be such a huge return on my loot markup over the long run. They are also what made hunting Atrox back then so much fun including some other things that could drop it. It seems they nerfed the daylights out of the drop or it’s no longer in the loot pools of so many creatures I use to hunt. My search for one continues.