Before I go off and do a bunch of other things in Entropia Universe it was time to get a couple more rounds in on the Atrox location I found the other day.

These hunts took place over a couple of different days in four different sessions. They were mostly a nice way to break up some grinding for Easter Mayhem 2022. While I did make it to at least rank 2 in bronze in Mayhem. I took quite a beating in the pocket. My Atrox runs were a lot nicer to me at least.

Atrox has quite a special meaning for me. Back in the day, they were a major goal I had to be able to hunt them one day. I had grinded for what felt like forever on a lot of lower monsters slowly building up my skills and game knowledge to hunt something with a bit more bite to it.

Atrox was also the biggest HOF (Hall of Fame) for the 24-hour leaderboard that I had ever gotten in Entropia Universe on. I wish I still had screenshots from back in the day they are however long gone. I went on a multiple-month hunting feast with what I looted doing all kinds of things I had only dreamed of doing. It was a bit stupid but a fun part of my Entropia Universe journey.

I have found for my hunts that I like around 200 PED worth of ammo usage. While my weapon amp looks like it could go for about 300 PED worth of ammo spent before I would need to head back for repairs. It’s just an amount I’m more comfortable with. It also takes a little less than an hour which works out great for me. I did do some flying around to make sure some of the old quest lines for Atrox were still not around to pick up. Some of them had been replaced with the new Codex system. While many others I believe I had already done it if there were only others.

This left me with the Atrox challenge from the Codex to slowly work on. Which was a nice welcome in not needing to hunt down and find a quest giver in the middle of nowhere on a massive planet. Such information is not always easy to track down. 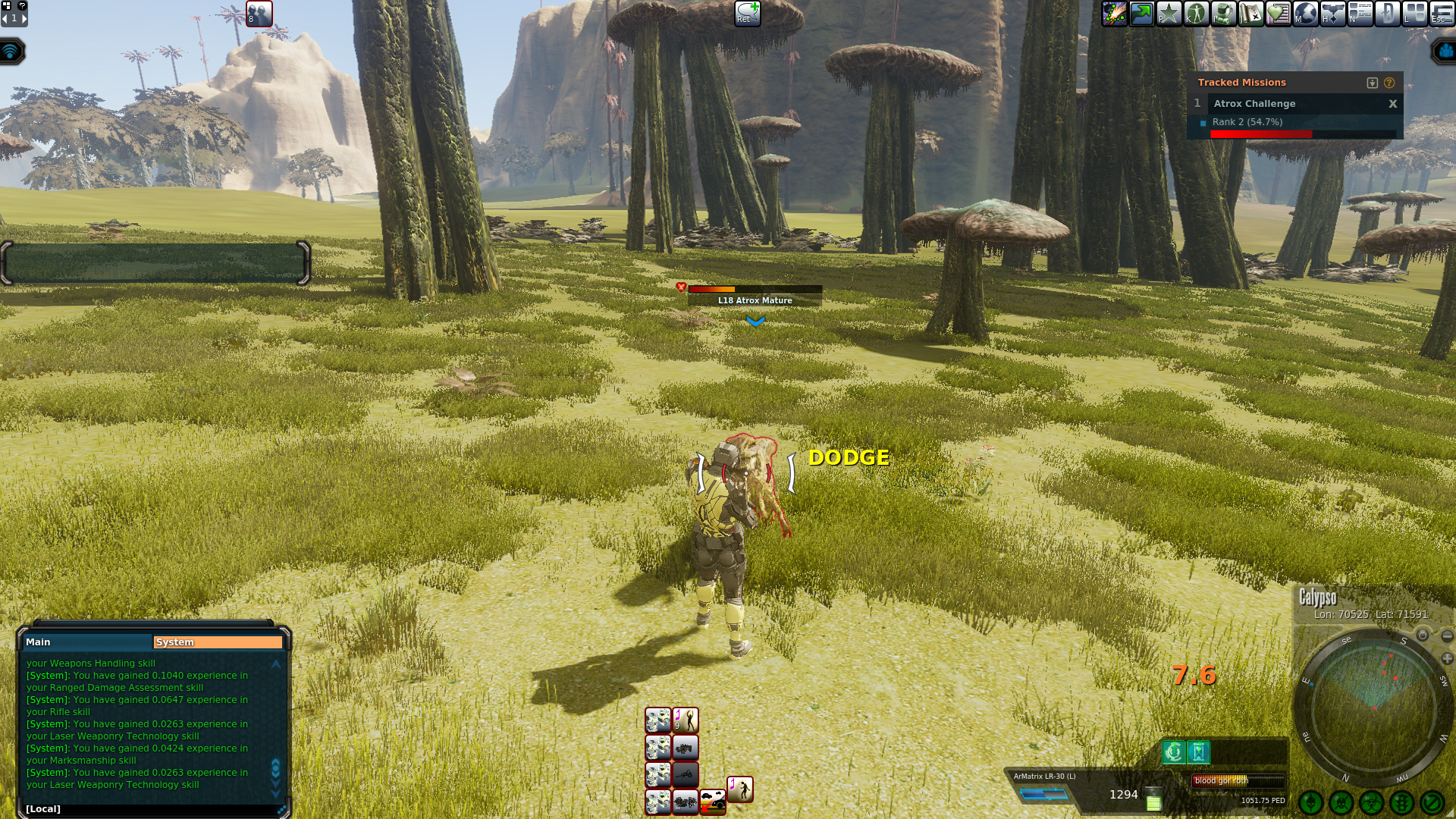 After that, it was back to my Atrox hunting spot to do some grinding. There is a lot more to the area than I have explored. There seem to be a few different areas people tend to set up around. I mostly just wander between two different mushroom forest patches that have some space between them. 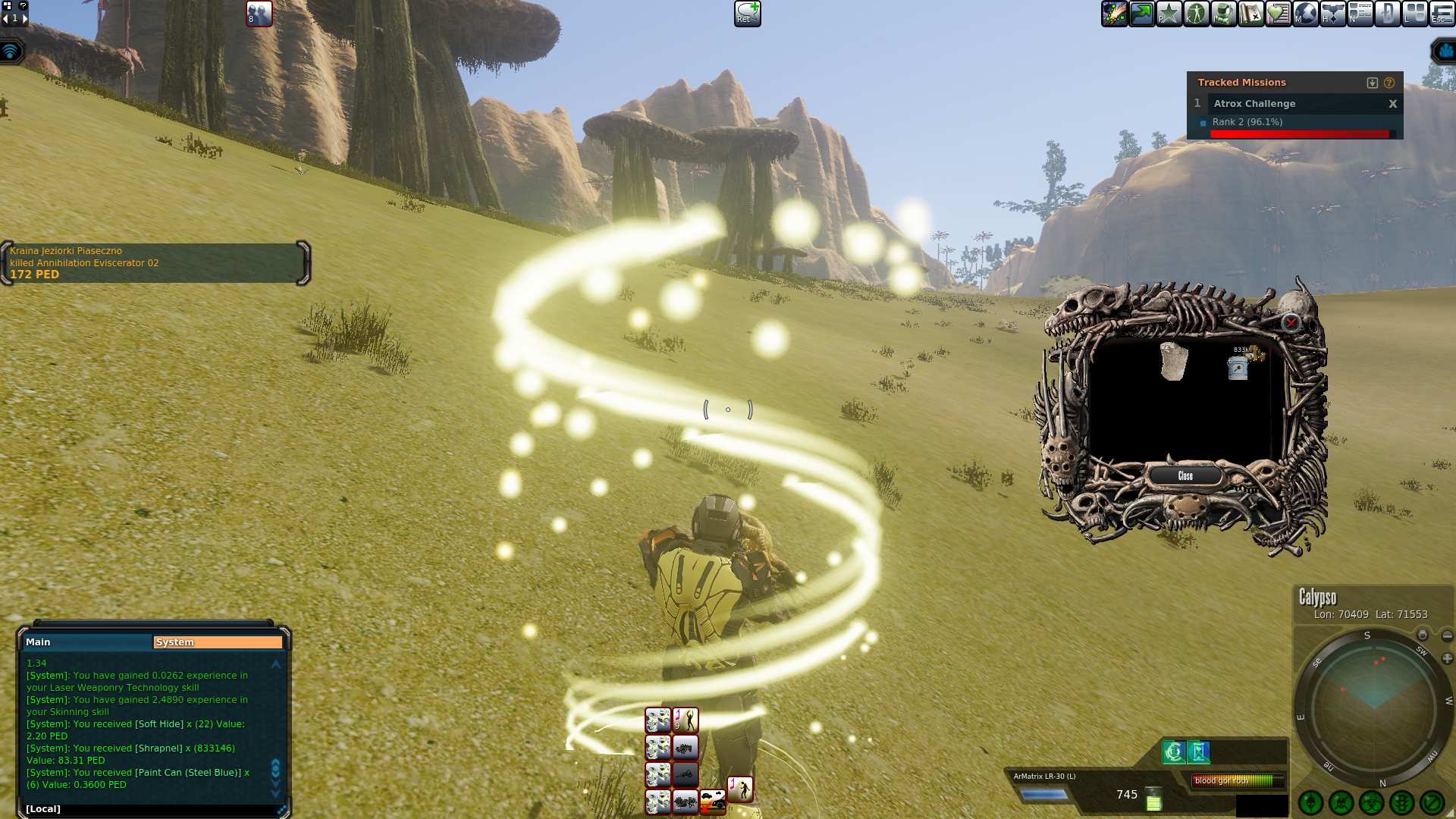 That trip out ended up going a lot better than I was expecting. If you don’t at least get a global or a rare drop a run can be quite a wash. I ended up getting my first Atrox global since returning. While nothing massive I’ll take 85 PED from a single kill almost any day of the week.

While the bulk of the items that dropped have little markup which is what I would expect. I can at least convert the shrapnel into 101% of its value for universal ammo. That Steel Blue paint also has some markup and I’ll hold onto it till I get a bunch more to list on the auction house.

That run was at least slightly in the green with 30 PED worth of profit. I will have much worse on my next trip out. I’ll take the slight win while hunting when I can. I got to learn to stay away from the Atrox Providers. It’s not that I can’t kill them. Fighting them reminds me of my early days when I went to go hunt Atrox far before I should have. I usually have to heal a couple of times allowing them to regen some health when I put down my firearm to do so.

I can only imagine the kind of loot that could be on one. They are also not the biggest Atrox out there either. I mostly hunt for the young ones which cause me the least amount of trouble. While this one was not in my way I cleared it out since this area was starting to get a couple of players in it.

The loot for that round was quite disappointing. I only cleared something like 154 in loot which did not cover my ammo costs let alone the decay on my weapons and attachments. Thankfully I don’t need to heal much so that cost is already quite low.

My third run after that was just as forgettable. It was quite late into the night taking a break from Mayhem and I had the entire place to myself. While I had a little more in loot it was still a decent losing round.

My fourth and final run for now at least on Atrox got a bit more interesting. At this point, I had bought some gearing I was missing to finish off a full set of pixie adjusted gear. Why I ever sold my original set back in the day when I parted ways with the game I’ll never quite know. I think I just wanted to go mining or something and lacked the funds during some random return adventure.

With a few more pieces in hand, I would be taking less damage overall. I was also starting to move around in the area in a way that I did not get a single add on me the entire time. I only had to heal a couple of times. I was also not over-geared either which feels like I found a great balance between my skills, healing, and gear choices. Around one-third into this final trip, I got another global. While it was smaller than the first one I knew the rest of the hunt was now covered for getting it so early in. This always makes it quite fun if you get anything else it will just be gravy on top. While that would be my last global for my final trip. I ended up getting a few decent-sized minis as well. The higher of them was this 35 PED hit. While just getting shrapnel and a worthless old Atrox bone is not that exciting. It was rather nice.

You might also notice on my radar in the bottom right a few green dots. I had yet to see this place as busy as it was. At one point quite a few people flew past me after they had finished their group hunt for the evening.

It is always interesting to see some lower players teaming up to take something bigger down. I did notice one of the groups out there did get a pack of monsters on them. I can only hope they did not run into an area I quickly cleared out and had the misfortune of them spawning back in faster than they could kill Atrox. At one point I ended up crossing an Atrox Guardian. At first, I was not paying enough attention to it that I thought it was another Provider. After healing quite a lot more than usual I more than noticed what it was. I did not have the right kind of gear, damage, or evasion skills to be playing around with it.

It was still doable and after a short while, it fell to the ground like the rest of them. I will however be avoiding them the best I can in the future unless I am carrying around a slightly bigger gun. 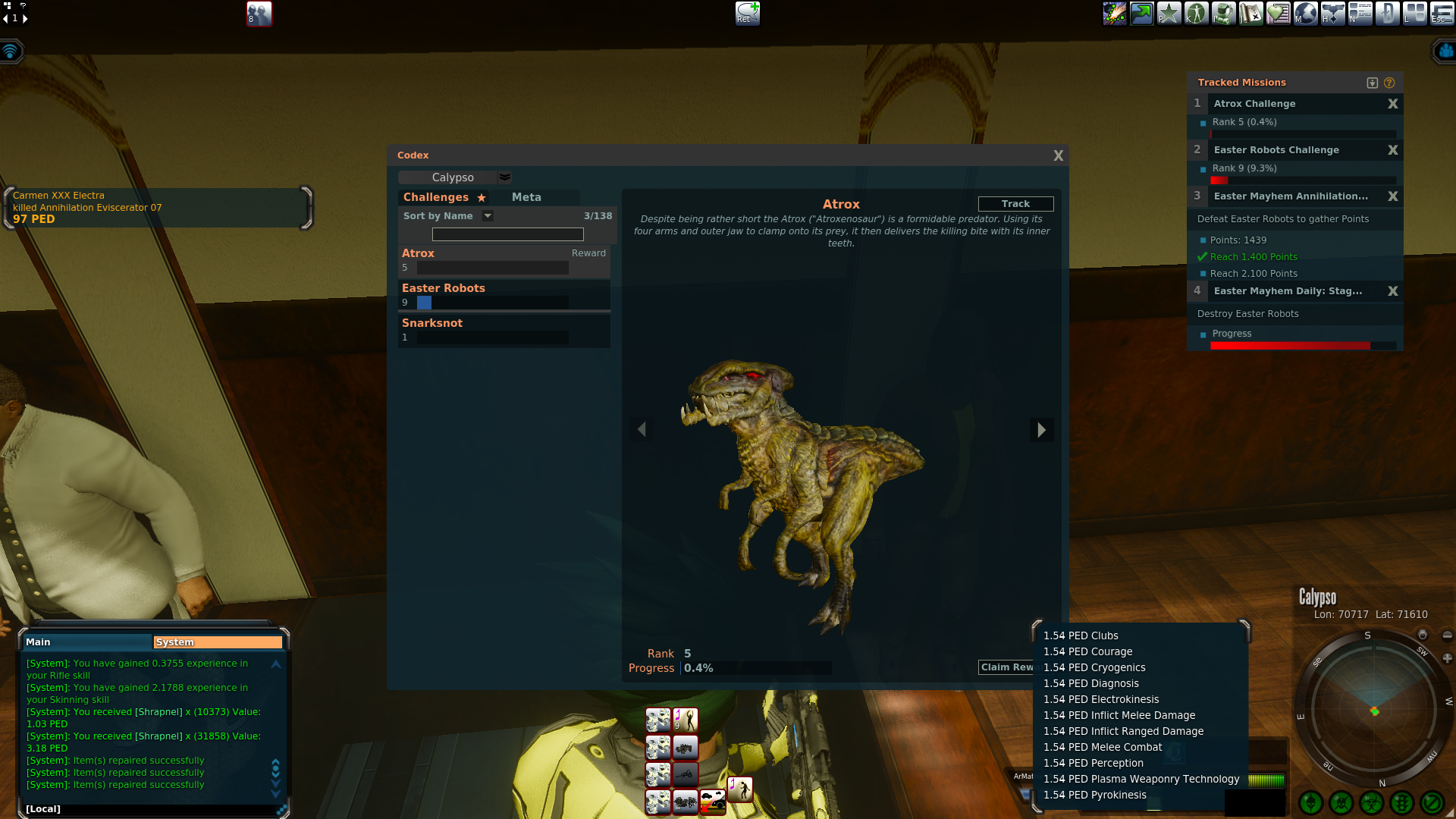 After the last 200 PED worth of ammo was spent I notice I was almost ranked 5 for the Atrox Challenge. So I stayed behind to finish off another 10 or so for the Codex. I ended up picking 1.54 PED worth of Plasma Weaponry Technology.

While I did not have much use for Plasma Weaponry Technology as I don’t use those kinds of guns unless I’m just single firing pull them with them. The skill itself was a lot lower than my other reward options. Because I took it increased some of my handguns levels among many other things.

Profession levels in Entropia Universe are a bit different than other games like that. Instead of just grinding one thing as high as you can forever. It might be better to go level up to something else as you can earn a lot of levels quickly. A lot of things are intertwined and end up having effects and raising other professions along with it.

That also makes picking rewards from the Codex a bit interesting. That 1.54 PED of Plasma Weaponry Technology was 395 experience for that skill. Anything else would have been a fraction of an increase for something I had a lot more levels into.

I wish I could go Atrox hunting every day all day. That however tends to not be the best idea to do in the game unless you got some deep pockets. Thankfully my last of four runs was nice that my overall losses were around 33.93 PED.

That is before including any markup on drops which is not a lot. I did finally have big enough stacks of some things to put up in the auction house. Hopefully, they will sell and all the fees won’t be much. I know there is a listing fee I forget what the selling fee is. My losses could end up being as low as 20 PED after all is said and done. This makes for quite a great hunting day more times than not.