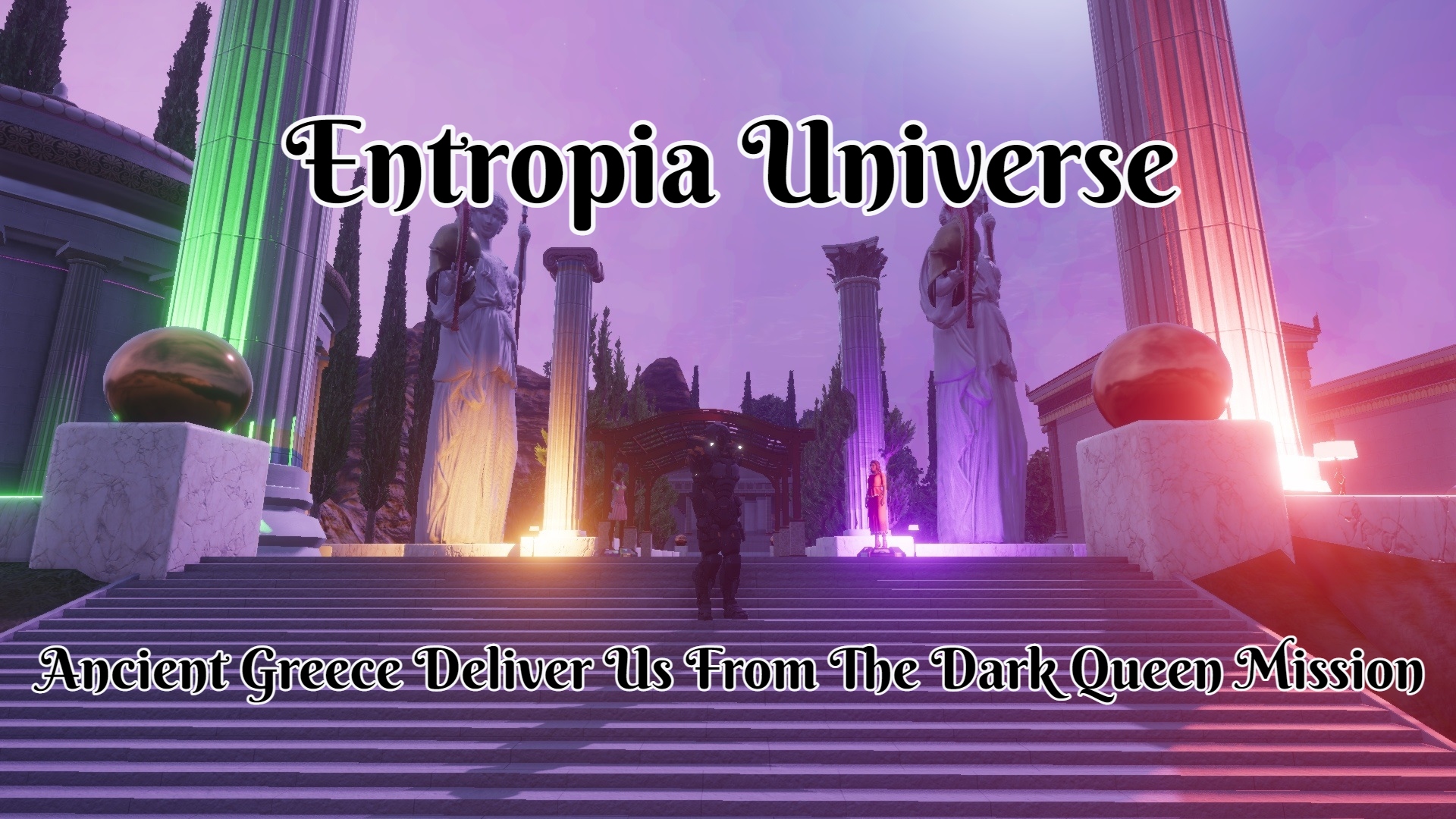 One of the major reasons I came out to Ancient Greece was to discover what was required to acquire some of the special armor and armor plating. While I was expecting there to be some kind of catch. I was also hoping I could at least acquire the first stage or two of the armor.

This post is going to cover the first few stages of Deliver Us From The Dark Queen Mission. Up till the point where you have to start doing the wave event. A further post then will go over some of the early waves of that event. Hopefully one day I’ll return powerful enough to finish off the entire mission and come out with further posts detailing those parts.

For those that just want the first tier of Gorgon armor, it is rather cheap these days just to buy a full set. It is also cheaper to buy it than to try to farm for it. As you are required to do a mission and hunt creatures in a wave event for it to drop. 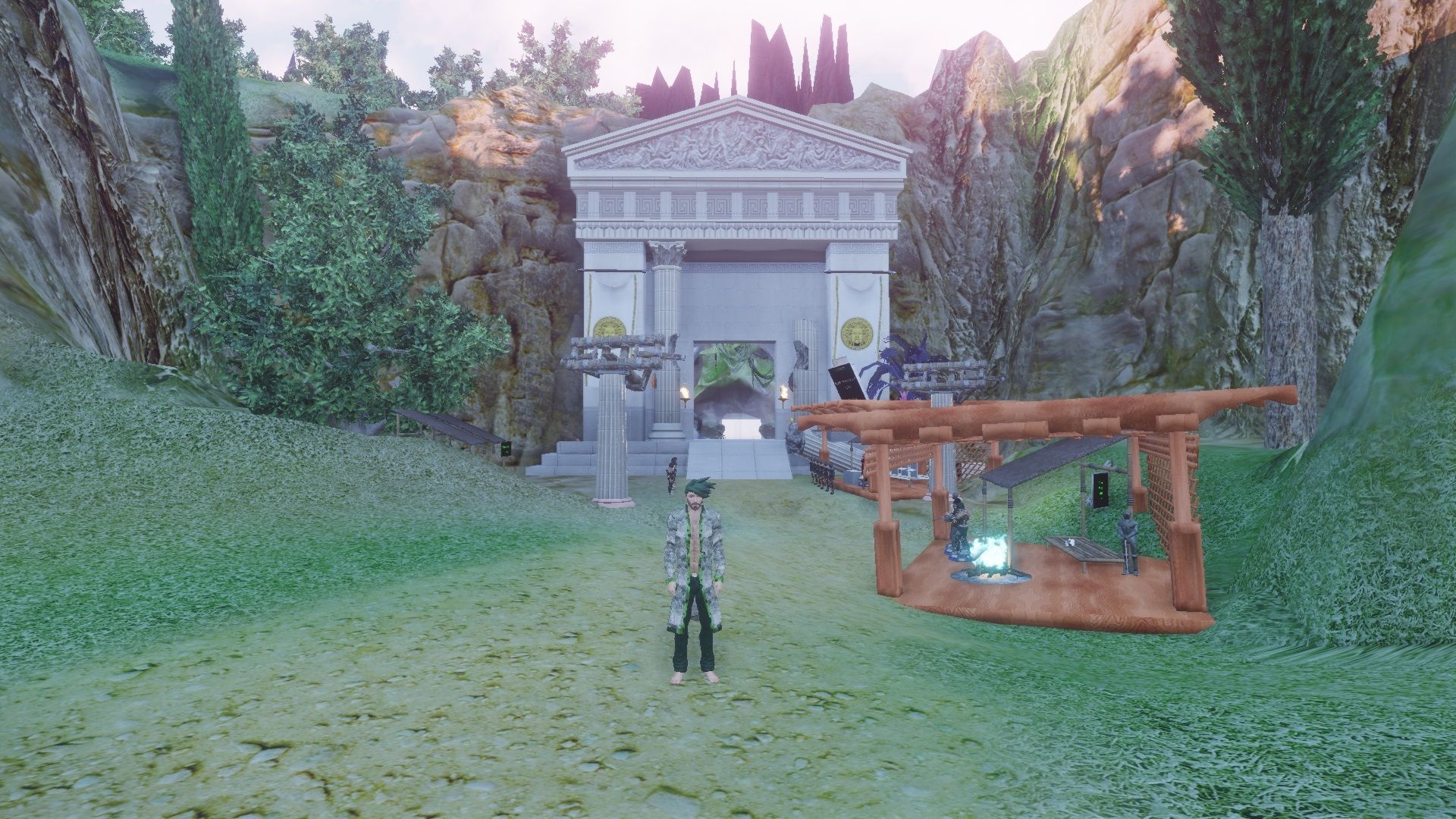 There are many shops around Ancient Greece and even Next Island selling the Gorgon Armor. Some of them might even sell sweat which is needed to trigger the wave event. Along with upgrade components for the higher tiers of the Gorgon Armor and plating. That is where the real cost starts to come into play.

Gorgon Armor itself are pieces of gear that you keep combining to increase slightly their stats along with other components to make higher versions of them. While this can make it quite pricy gear at the high end. For those that can afford it, this stuff starts to become quite powerful and even has set bonuses. That is something a lot of uber and higher-end players seek to have.

You can often find many higher-level players grinding away for the upgrade components themselves. If you are someone like myself with just Gremlin Armor and say ArMatrix Lr-35 (L) keep in mind that the highest creatures you will be able to kill in the wave event will be something like young to providers. With anything higher being over 2k health and packing quite a punch. As you kill Enslaved Daudaormur and harder creatures trying to get armor and upgrade parts in the wave event.

For this guide, I’ll just be going over being able to hunt the Enslaved Daudaormur. They at the lower end have a little less than 1400 health when it comes to young maturity. If you are careful in the arena you can often snipe a few of the lower level ones even into some of the higher waves of the event. 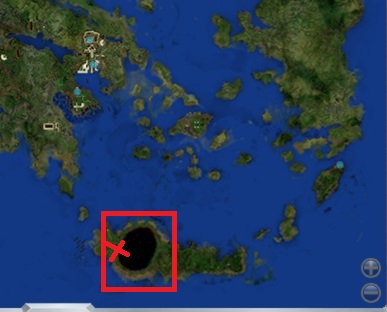 The wave arena for Enslaved Daudaormur and Gorgon is at the bottom of the map in Ancient Greece. However, you can’t just walk in there and start hunting. If you do deadly toxin poison will kill you. That is because you need to unlock “protection” from completing a mission change that will involve hunting, mining, and crafting. Along with some running around talking with NPCs.

Before you can accept that mission to gain protection however you first need one called Find Batiatus. Batiatus will be the NPC you end up engaging with a lot as you progress through this mission chain. The mission giver is called Haruspex Elder and can be found at (36003, 19855) inside the Orpheus Cave on the Ancient Greece Side. 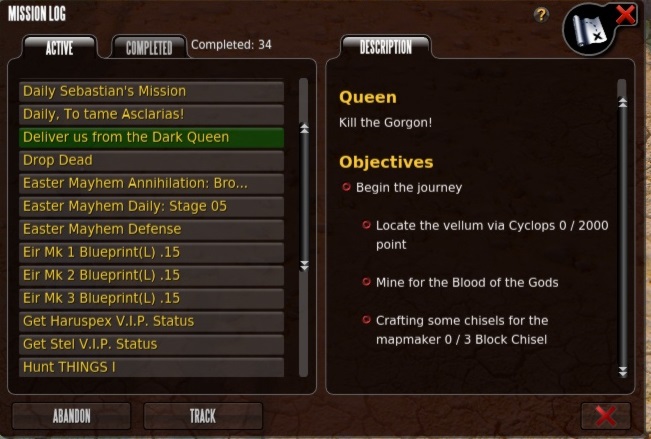 You will then be sent to Batiatus where you can start the mission called Deliver us from the Dark Queen. In that mission, you need to collect 2k points from Cyclops to get one “vellum”, mine for “blood of the gods” and craft three chisels. 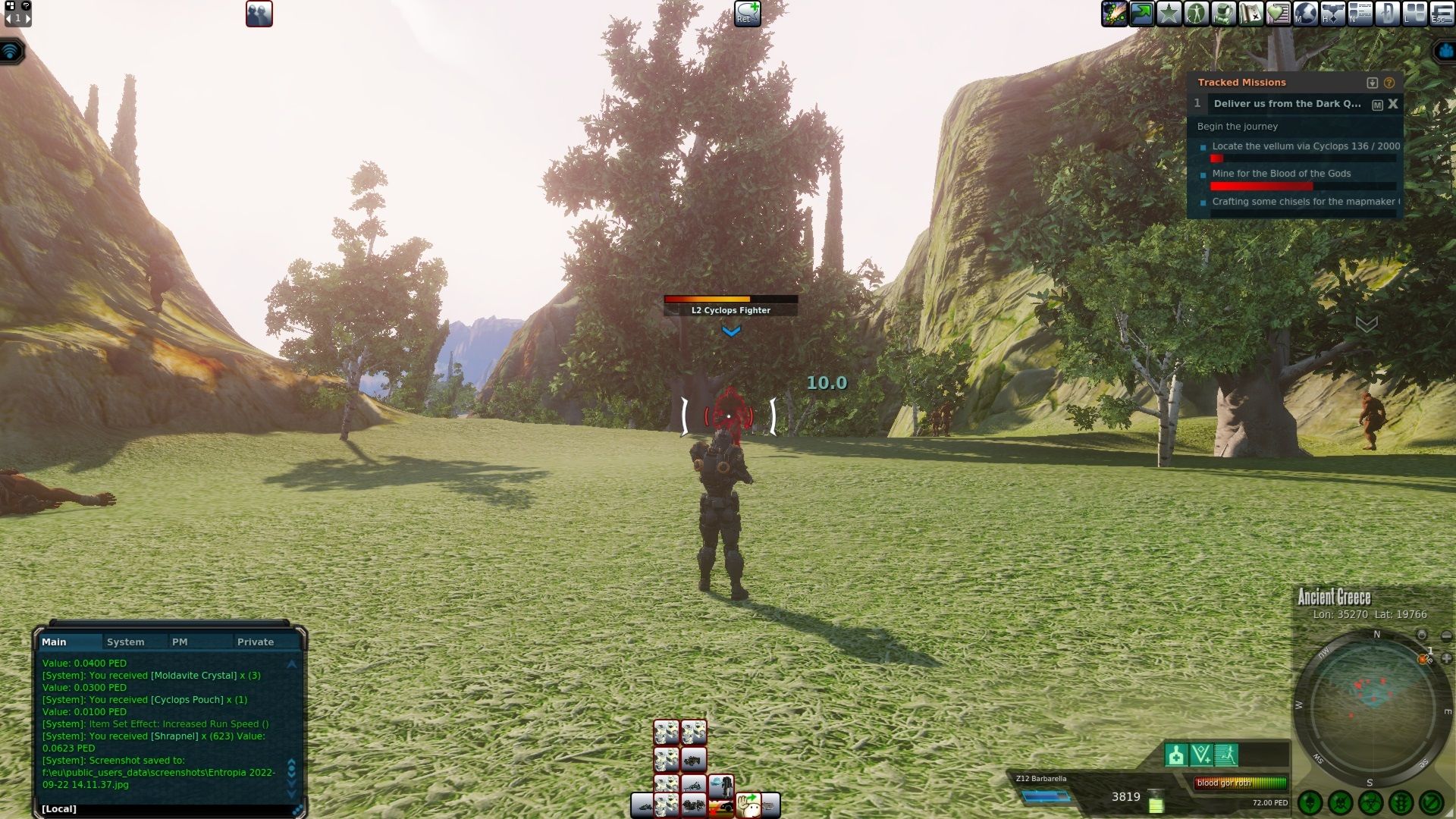 For the Valium part, it seems I was earning 4 points for level 1 Cyclops and 8 points for level 2. These are very low-health creatures and will take at most 500 kills and much less if you are hunting the bigger ones.

While I was out exploring it seems the spawns for the higher-level Cyclops have moved. Also, you need ones that are named “Cyclops.” The other kinds of cyclops did not give credit for the mission itself.

You can find a bunch of low-level Cyclops around (35267, 19754) in Ancient Greece. They do drop a few different high markup items. The issue for those items tends to be a lack of volume of sales. Make sure to save Cyclops wrist guards for the crafting portion. 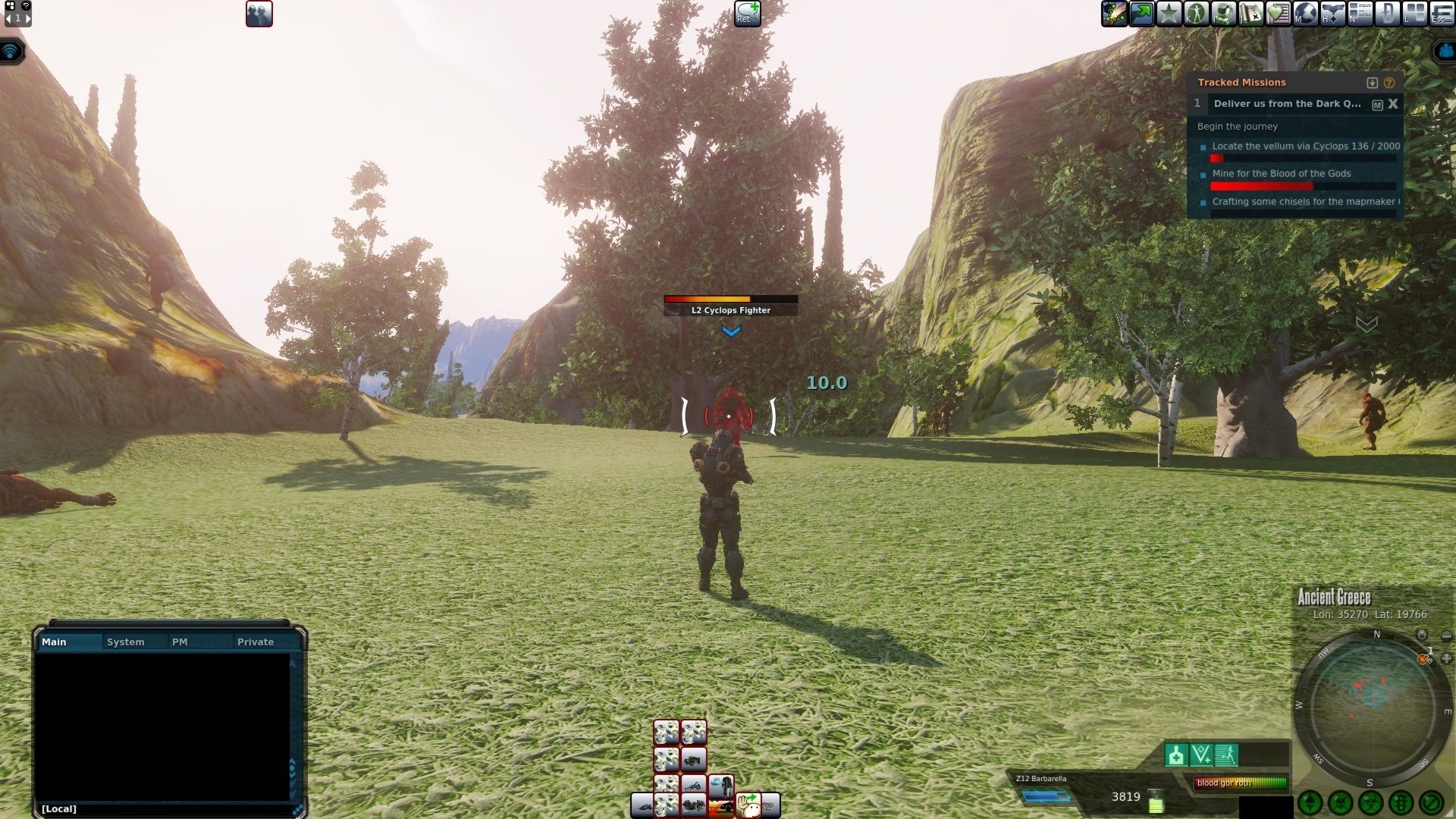 While I did not keep track of the exact ammo I was using as I did some mining as well. I would estimate I used around 150 PED of ammo. They are quite easy even with a Z12 Barbarella. After TT returns and markup at least for me, this ended up being the second cheapest of the three main actives you need to do for Deliver us from the Dark Queen mission. 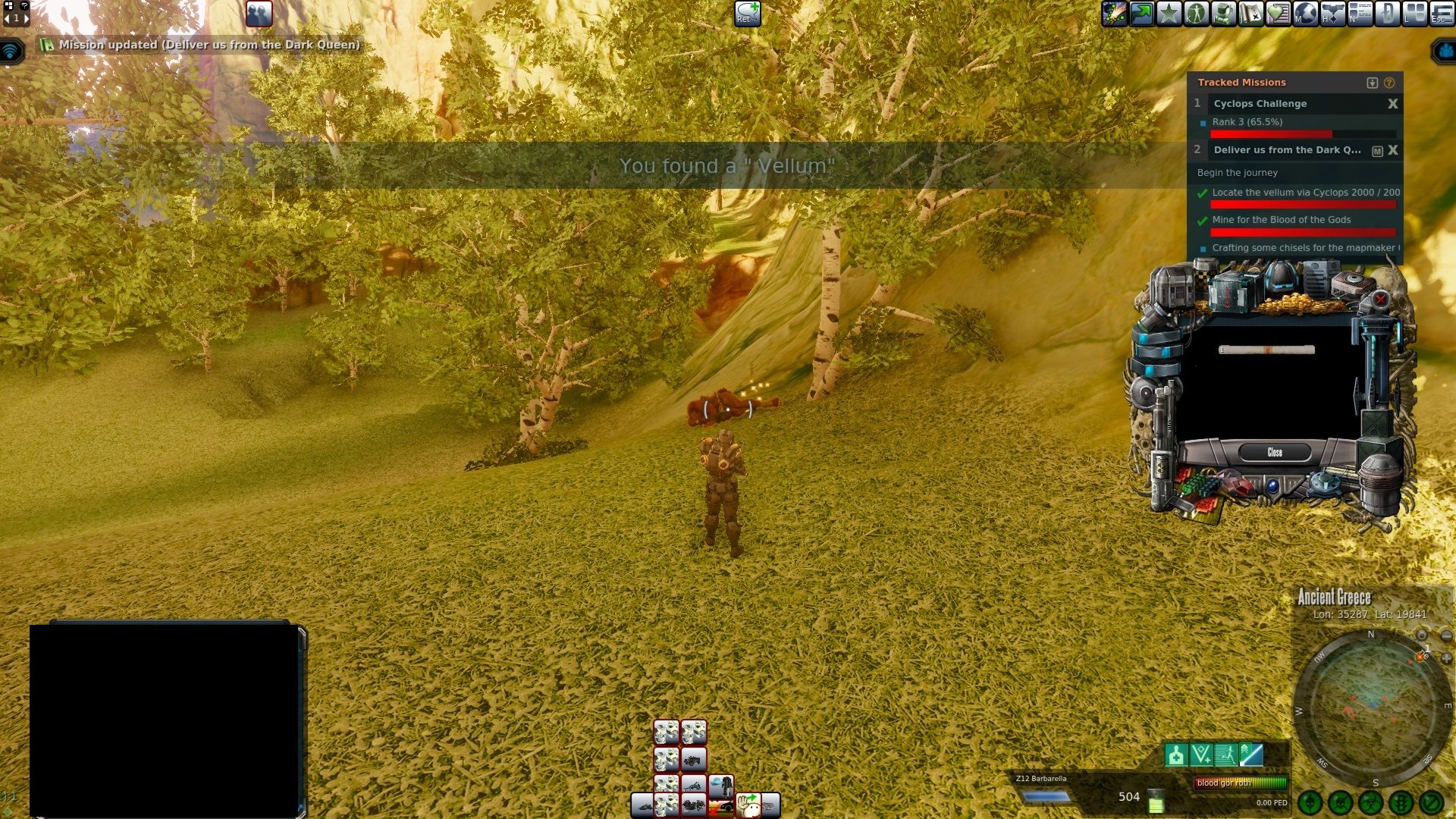 Once you have completed this section of the Deliver us from the Dark Queen mission you will receive an item called vellum. Hold onto it as you will need to turn it in for future parts of the mission change.

Mining Blood Of The Gods Another thing you need to be doing is mining. You gain mining credit, not from dropping probes or finding mining claims themselves. Rather how much TT value you have extracted while in Ancient Greece. Along the way, you will discover the blood of the gods that you will need to hold onto for a future turn-in.

While you are mining make sure to save any lysterium and iron you find. As they will be required for the crafting portion of this mission chain.

At least for me, mining was perhaps the more rewarding activity. While I’m sure how many probes I dropped to finish off the part of the mission. As I did this throughout a couple of trips here. I was about break even after the markup. 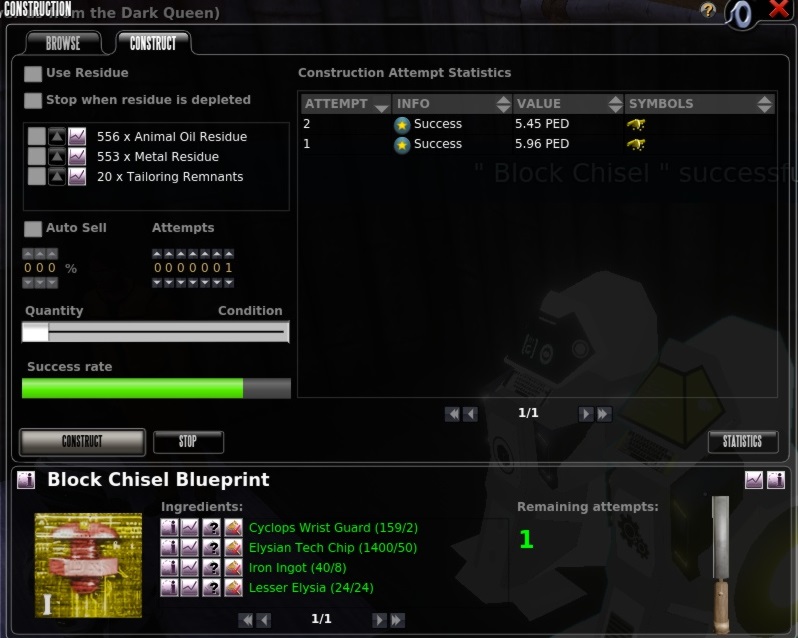 I would expect someone who crafts could do that a lot cheaper than I did. I only had around level 8 Tailor and Metal Engineer. Thankfully these blueprints to do this are out of the learning period after level 5. Most players who have at least played the game for a while and done a little bit of crafting should not struggle too much with these. Both blueprints require skill level 0.

The first part you will want to focus on is acquiring all the blueprints you will need for crafting. You could try and buy everything off the auction house. There tends to be a limited supply of ingredients in the amounts you need them unless people are charging quite a high markup. 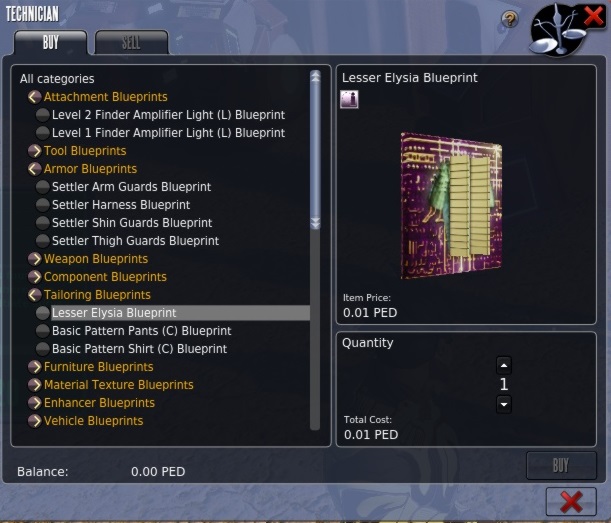 You will need a Lesser Elysia Blueprint. These can be bought off any technician for .01 PED. There is one in the building at Crystal Peak Teleport at (136824, 83333). The other blueprint you should already have is from Block Chisel Blueprint. To be able to craft a single Block Chisel you will need 8 iron ingots, 2 cyclops wrist gourd, 50 Elysian Tech chips, and 24 lesser Elysia (8 lysterium ingots and 20 vibrant sweat each.)

You should have more than enough Cyclops wrist guards from all the Cyclops you had to kill in the first portion of the mission.

For acquiring a lot of Elysian Tech chips there is a daily mission for acquiring them. I go over that in detail in [another post](. For Vibrant Sweat, there is a sweat circle location just outside Crystal Peaks Teleport at (136867, 83418). Which I go over in a further post regarding that here

For those that don’t want to farm a lot of sweat, you check in Crystal Peaks to see if anyone sweating is selling some. There are also a few shops there as well. You can also check the player stalls in Ancient Greece near Knossos or Thebes Market. 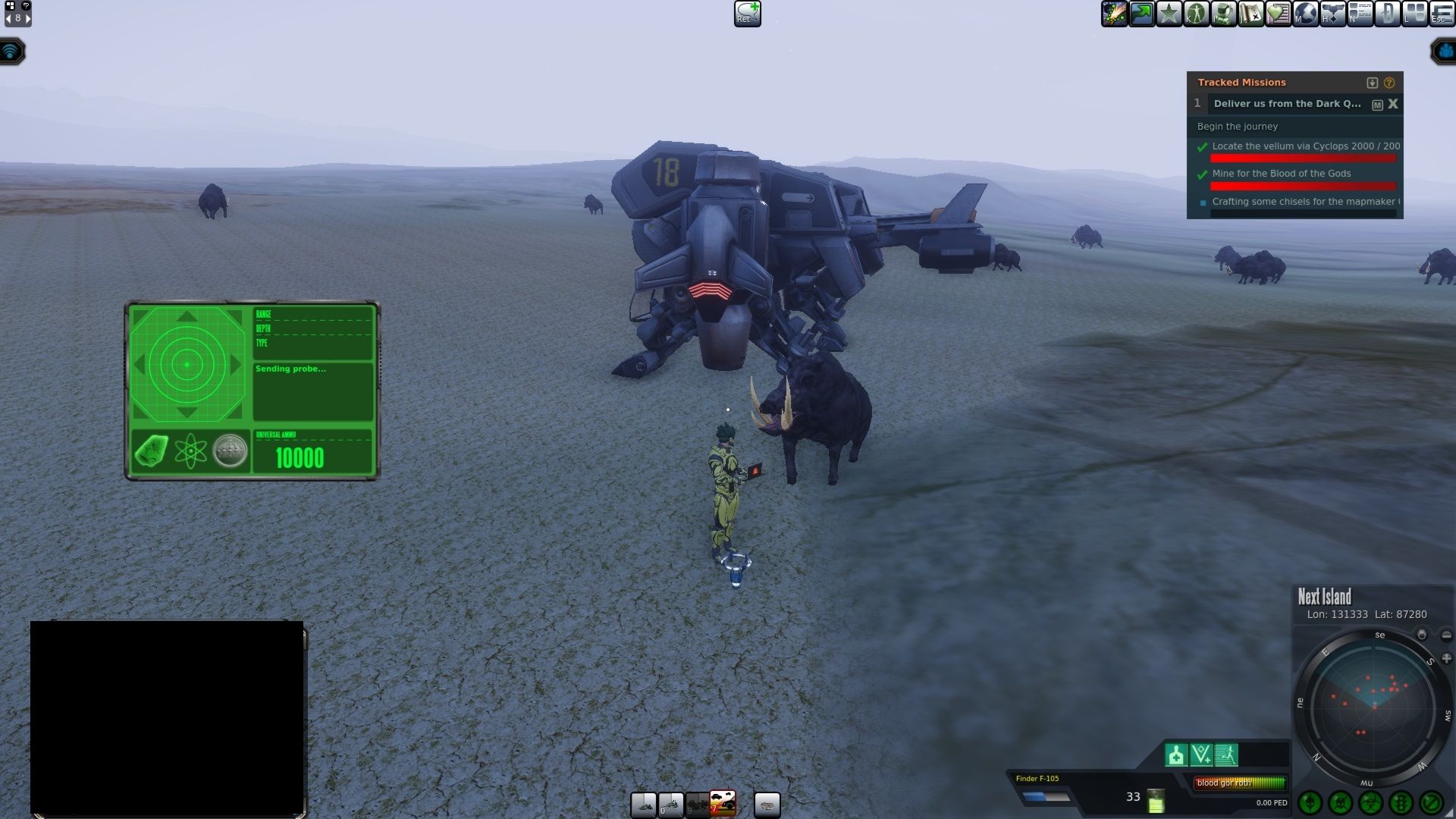 As far as mining for Iron and Lysterium you will find Next Island has a lot of different ores in just about every section of the map. I found it hard to try and target farm just for that. They are however some of the higher percentages in most areas. So just mine wherever you like till you get enough. This ended up being the most expensive portion of Deliver us from the Dark Queen mission for me at least. Between turning in 15 PED worth of Block Chisels (3 of them total) and all the fails or non-successes crafting. I was out about 75-100 PED which was still not that bad.

Turn In And Travel

Once you have 3 Block Chisels, 3 Blood of the gods, and 1 Valium. You head back to Batiatus in Ancient Greece and turn them all in. Batiatus then sends you on quite a lot of go to a checkpoint and talks with the NPC-type missions. Most of them are showing and go over how players who defeated the gorgon first got to select different massive estates in Ancient Greece. You will see a lot of top players in Entropia Universe owning one.

Once are done with quite a few of those types of missions. Batiatus then will send out to fetch three items (hidden gem, elixir, and the book). They will have waypoints to them and are quite easy to fetch objects. You just run up and interact with the box each item is in.

Once you collect all three items you head back to Batiatus and this time he sends you off to talk with yet another NPC that will just be right outside of the arena. After that, you can go inside without getting killed. That was not as bad as I was expecting it to be. Next up I’ll be doing some hunting in the arena wave events against Enslaved Daudaormur. Along with going over how to activate it and some other things I’ve noticed.